As a kid, I loved Tintin.

In case you don't know, Tintin is a young journalist, and lead character in a series of comics set in the early 1900s created by the French cartoonist Hergé. Tintin is awesome – in his exciting travels he finds mummies in South America, discovers a treasure ship, gets lost in the desserts of Arabia, climbs the Himalaya mountains in Tibet, and even goes to the moon. Strangely, in the collection I had, he never ventured into Africa.

Recently, however, I came across a copy of Tintin in the Congo in a bookshop in Thailand, and it's easy to see why this never sold in South Africa: this is Tintin as the epitome of colonial overlordship. That aside, in a series of events which includes Snowy besting a lion and Tintin accidentally shooting an elephant, they comes across a Christian missionary running a jungle school. Cool. As it turns out, one of the teachers in the school is unavailable, so Tintin graciously offers to teach the lesson and is promptly ushered into the classroom. And so we have it – Tintin, the intrepid adventurer, is a teacher!

So, for three little panels, we witness Tintin's efforts at the front of a classroom in the jungles of tropical Africa. Not just that, he embraces the task with apparent ease!

In many classrooms, questioning dominates teacher talk. Questions form a crucial part of a successful lesson: they increase student participation and involvement, give the teacher valuable information about what the students already know, help to focus students' attention, and improve the teacher-student relationship.

One way in which questioning can be used is for eliciting. Eliciting involves the asking of specific questions that lead students to new knowledge. By doing so, the new knowledge is sourced from the students (so to speak), thereby making them an integral part of the learning process. By contrast, if the teacher were to simply tell the class, the students passively receive the information. So for example, a teacher may tell the students that 'a half' is 1 part of 2, or alternatively can lead students to understanding this through a series of eliciting questions:

I concede this is a maths lesson and it's a little contrived, but you get the idea I hope. By eliciting as we move through the material, the students are involved, and the new learning appears to come from them, making it altogether more achievable and understandable. Teachers who use this technique have a lot of fun with their students.

But things can go wrong. A teacher has to be careful how the questions are phrased so the students' knowledge can be activated. I have come across lessons where the teacher is valiantly trying to elicit target words, and the students are really not sure what's going on. To keep the lesson flowing, and to be nice to the teacher perhaps, they guess randomly at whatever comes into their heads until someone stumbles across whatever it is the teacher wants.

Or alternatively they just keep quiet and scrupulously avoid making eye contact with the teacher in the hope that the teacher will ask someone else. One student recently complained that the teacher was constantly requiring the class to guess answers to questions that they didn't understand, and that then rejected their attempts at answering – “Why ask if he is the only one who know the correct answer?” the student lamented.

Let's go back to Tintin teaching in the Belgian Congo. He's also having a problem. In each of the three panels in which Tintin is teaching, he asks the same question and never gets his answer from the non-responsive students: 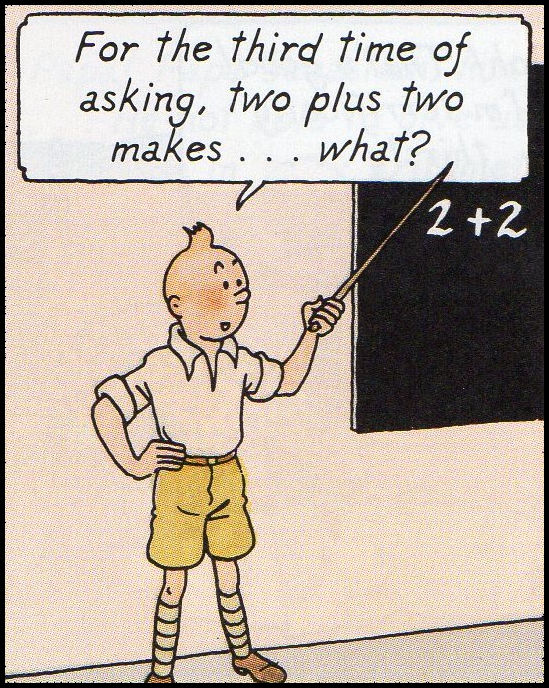 Oh dear. Why are the students not responding? What has gone wrong? Why does Tintin keep asking if they don't know the answer? If the students don't know, is there something Tintin can do to remedy the situation?

I don't think Hergé was expecting his readers to analyze Tintin's pedagogical approach too closely. But there is something to learn here. Tintin's teaching uses the useful strategy of asking questions. Rather than just telling the class, he tries to elicit a response from the students: beneficial for a lot of reasons:

Eliciting helps to create a much more dynamic classroom in which the students can participate and give their own ideas, and the teacher has a firmer basis for delivering new information. You can read more about eliciting in chapter 8 of Classroom Teaching Strategies by Richard Watson Todd. (PDF Link)

But we also learn that Tintin's teaching needs some work – he needs to reflect on his lack of success with his questions: maybe he could to consider ways of rephrasing them; or perhaps he could look at how he contextualizes the topic before he starts eliciting; or he might think about what prompts or scaffolds to put in place to help students get to the answer he is looking for – some visuals, say.

But all these considerations would imply that Tintin had time to prepare his lesson, which was not the case here. So it could be I have taken the wrong message from the comic: this is actually a cartoon depicting what happens when we throw a novice teacher into a class without the opportunity to plan. It's the nightmare of a substitute teacher stumbling through a lesson and glad when it's finally over.

Man, these comics are deep! To think my mother told me I wouldn't learn anything from reading them!

Steve Louw is the lead trainer of the popular Chichester College TEFL Course in Bangkok.

So you're just going to ignore the blatant racism of Tin Tin in the Congo? Which depicted the Congolese as good-natured, lazy and in need of a European master. Please explain the pedagogical benefit of destroying the self-esteem and self-image of black children. BTW, Hergé is BELGIAN, like the King Leopold II, who murdered 10m Congolese.

Great read,
Love your example, Tin Tin is lucky to have Snowy tittle railing, forever his cheer leader, thanks Steve for some simple tricks consider in the class room.
The "knowing" kids like to help the "confused kids, and I like that you enforce allowing them to to help, sometimes the penny drops "so to speak " when explained on different terms..
Thoroughly enjoyed this article