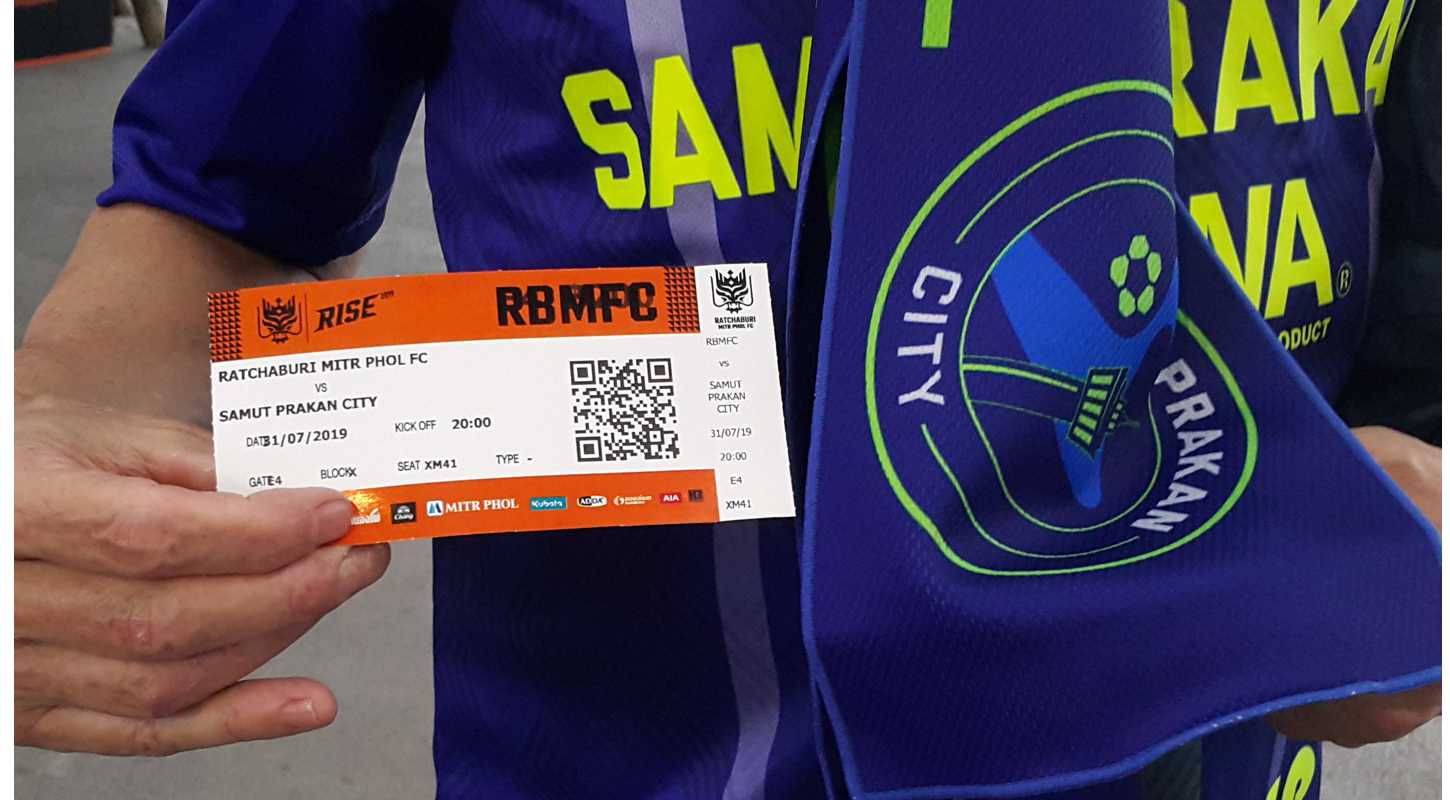 So we're off to Ratchaburi for a mid-week league encounter. How are you getting there?

Yes indeed. You can take a regular public bus to Ratchaburi from Bangkok's Southern Bus Terminal and do the journey in a couple of hours but I'm going to do something I don't do often enough in Thailand and let the train take the strain.

Looking at the timetable, there are about five trains leaving Bangkok's main Hualampong Station that will get me there well in time for the 8.00 pm kick off.  The train journey is about two and a half hours (give or take an hour for delays and unscheduled stops en route)

And it's the chance to meet up with an old mate?

Yes, it's an opportunity to catch up with my good friend, Mark, who I keep in touch with on social media but haven't seen for a while.

Mark and I were teaching colleagues for a number of years and did a lot of corporate training classes together. They were good times! But Mark eventually decided he'd had enough of the big city and moved to enjoy a quieter life in Ratchaburi.  He's done well for himself (as guys with Mark's attitude to life generally do). He's got his own house and car and a good, steady job at a local Thai school, where he's become almost part of the furniture. It'll be good to see him again. Mark and I always got on well and share much the same outlook on life.

Mark's going to be the chauffeur for the day, accompany me to the game - and hopefully provide me with a bed in his spare room for the night. 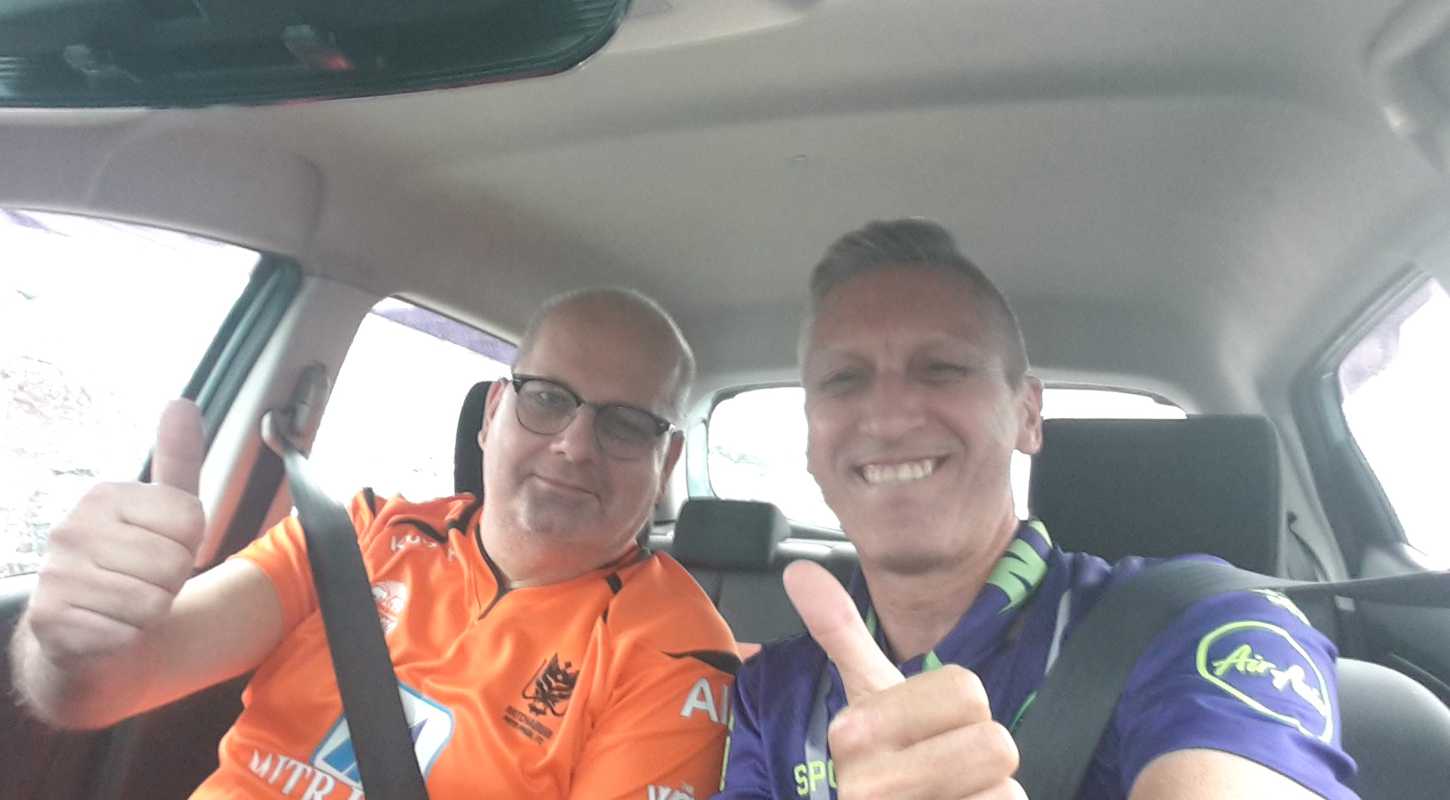 Is he a Ratchaburi fan?

I think it was partly through reading my football blogs that he developed an interest in Thai football because if you go back to the start of the season, he wasn't even sure where Ratchaburi's stadium was. However since then he's bought himself a replica shirt and an orange baseball cap and he's attended a handful of home games. He's probably not what you would call a massive football fan though; he actually prefers the American version.

How are Ratchaburi doing this season?

With 20 games played, they have won 7, drawn 3 and lost 10, with their home form almost as inconsistent as their performances on the road.

They are currently 10th in the league and beginning to cast anxious glances at the relegation zone below them. As it stands, The Dragons are just four points above the bottom three.

By contrast, they have managed to reach the quarter-final of the FA Cup and with a plum home draw against Thai Honda (the team who knocked out Samut Prakan in the previous round) they'll have their sights firmly set on a semi-final place at least.

Back in early April, Samut Prakan secured the three points in a very hard fought 2-1 win thanks to a last-minute goal from Ibson Melo. 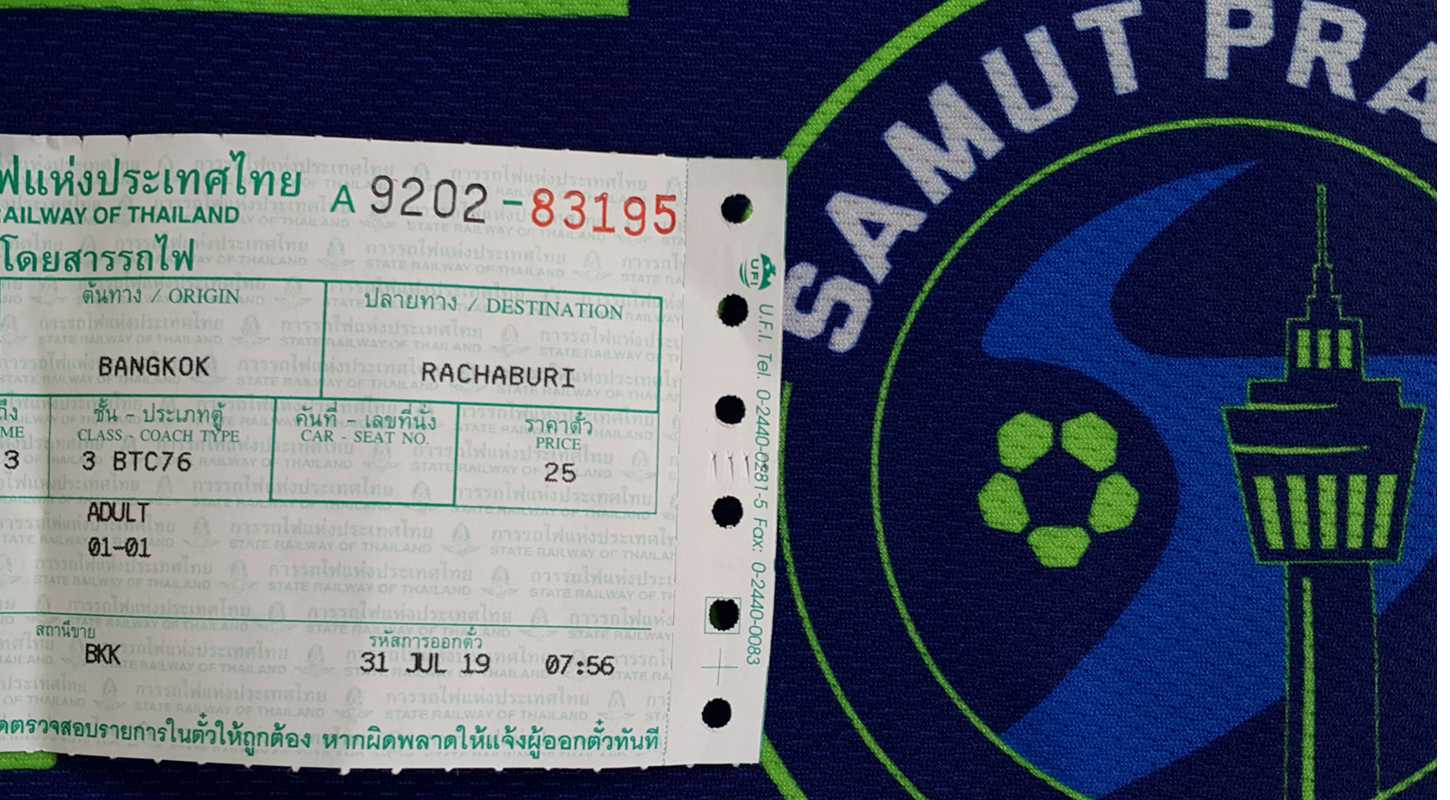 So how was the train ride to Ratchaburi in the end?

Train travel in Thailand is always interesting. Being the 'early airport' person I am, I decided to catch the 9.20 am train bound for Hua Hin, which was due to arrive in Ratchaburi at midday (and it arrived bang on time too) The journey took two and a half hours but I enjoyed every moment, especially as I had almost the whole carriage to myself.  You get a different perspective on life in Thailand from the window of a train - the rice fields, the immaculately-kept provincial stations, the activity that goes on at the side of the tracks and just observing how villagers live. It's all infinitely more enjoyable than mile after mile of grey, soulless highway. And at just 25 Baht (less than a dollar) for a seat in third-class (perfectly adequate for a shortish journey), it's an incredible deal! 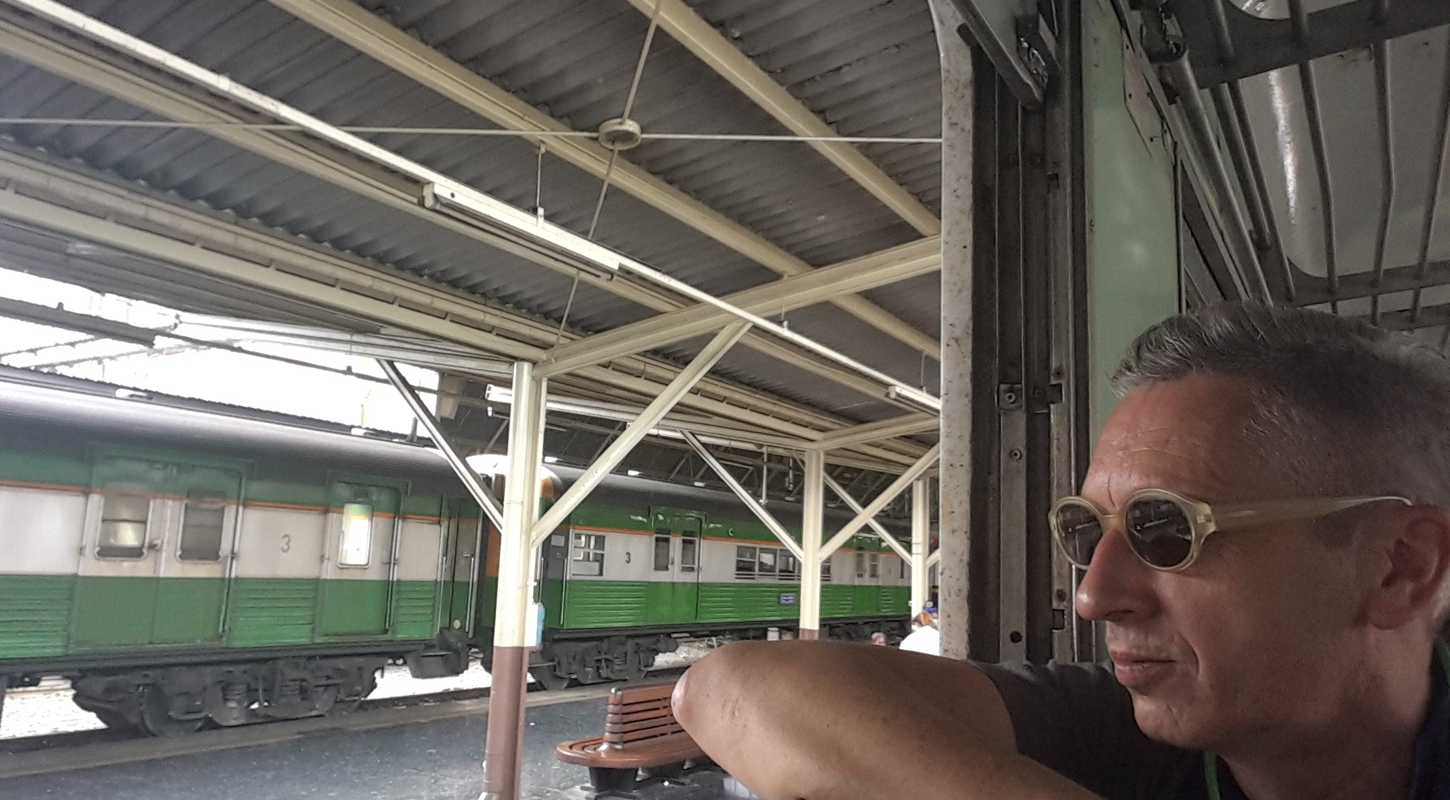 Mark had taken the afternoon off work and was already there to meet me at Ratchaburi Station. We ate lunch together at one of his favourite roadside eateries and then drove the ten kilometres to his house, where we spent the afternoon just lounging around and catching up on the last 5-6 years.

Later, we made our way through Ratchaburi's version of 'rush hour' traffic and reached the Mitr Phol Stadium almost two hours before kick off because I was eager to take some photos outside the ground before we lost the daylight. We had driven through a heavy rainstorm on the way but thankfully we weren't troubled by any more wet stuff for the rest of the evening, and when you're sitting in an uncovered away end, you're always grateful for that. 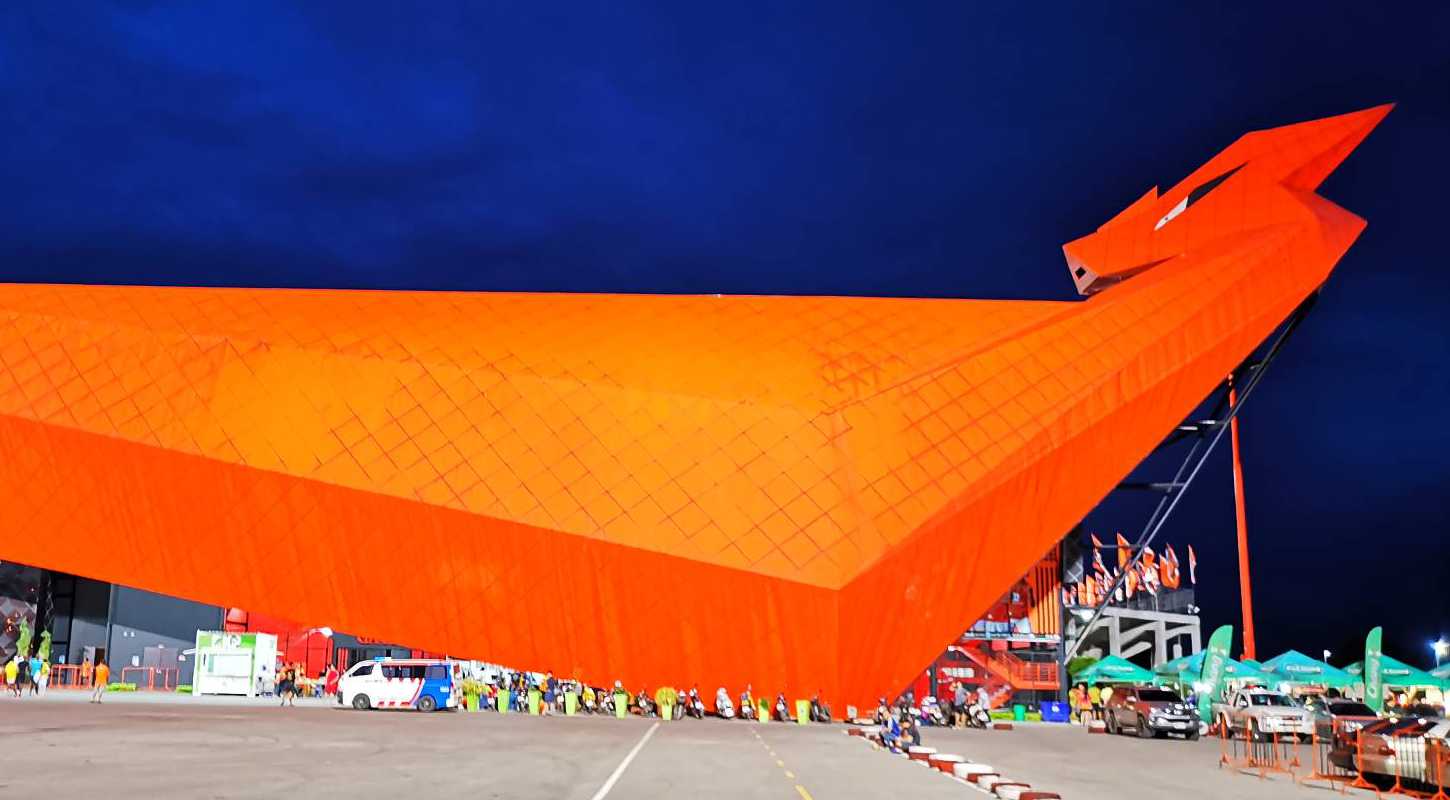 You had looked forward to seeing the Mitr Phol Stadium?

Many football fans say it's the finest stadium in the Premier League and the away trip they look forward to most. Well, you can add my voice to that because I couldn't heap enough praise on it. The Mitr Phol Stadium is simply magnificent!

I know it wasn't built all that long ago but it's clearly so well looked after. There isn't a scrap of litter or a patch of rust anywhere. There's a spacious car park, a well-organised fan zone where you can purchase drinks and snacks, an efficient and friendly ticket office and a well-stocked and impressive club shop. And all of this under the shadow of the main stand, with its own fiery orange dragon incorporated into the build and dominating the skyline. It's all just wonderful and standards are fastidiously maintained inside the stadium as well. I paid a quick visit to the gents toilets underneath the away stand and I swear you wouldn't find cleaner washrooms in a private hospital.

Many Samut Prakan fans there?

About 50 at most, which I thought was a disappointing turnout for somewhere that's relatively easy to get to from Samut Prakan. As far as I know, I was the only supporter who had come by train; everyone else went for the car pool option.

OK, let's get to the game itself. Any surprises in the team line-up?

I was disappointed to see Teerapol start on the bench given the good form that he's enjoying at the moment. And no return from injury for Captain Peeradol yet. 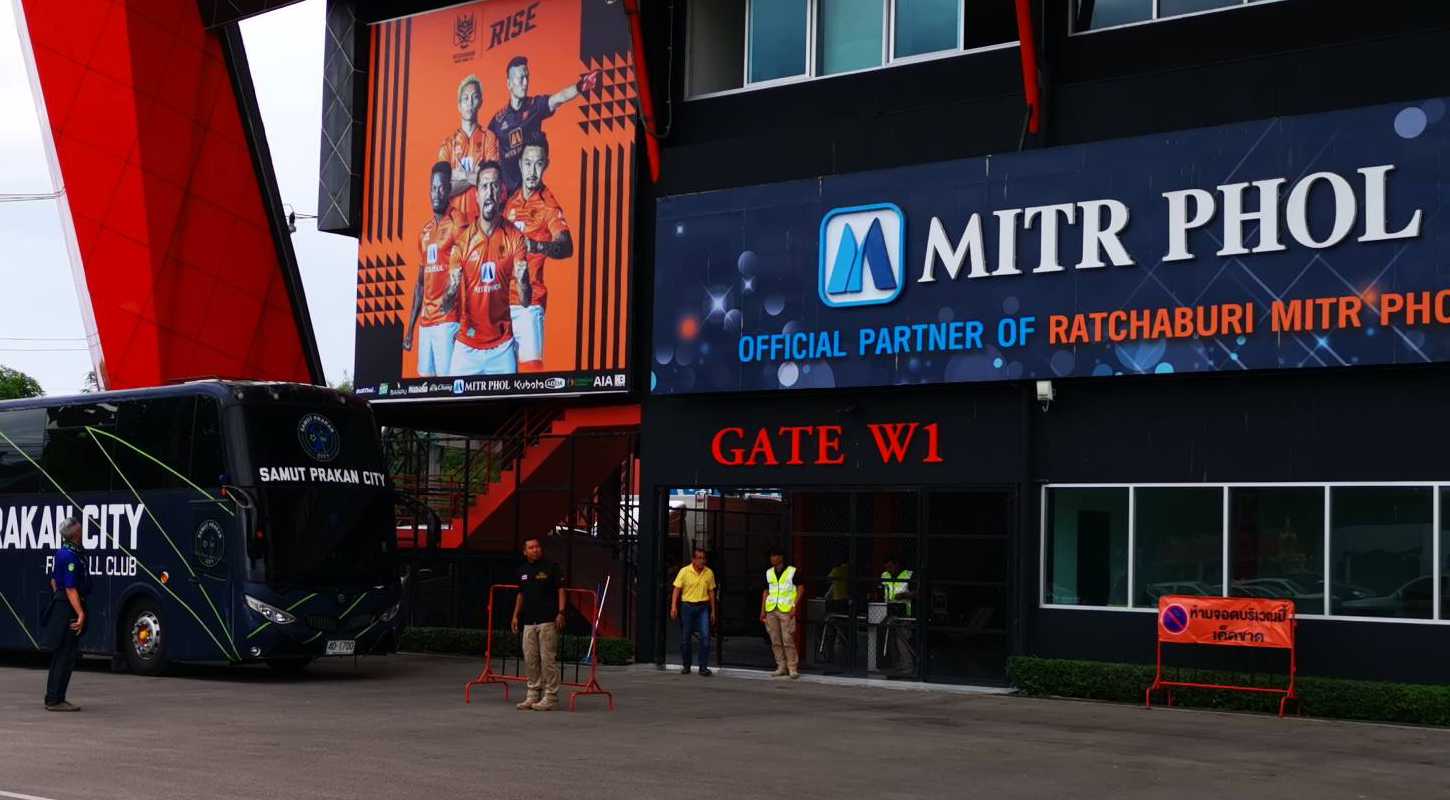 How was the first half?

From a Samut Prakan point of view, there was little to get excited about. Ratchaburi were by far the livelier team and it's fair to say that goalkeeper Supawat, who had a poor game on Saturday in the 4-1 defeat against Buriram, kept us in the contest with a string of fine saves. However, Samut Prakan somehow managed to take the lead on 32 minutes. The Ratchaburi defender miskicks a simple clearance and the ricochet finds its way to Picha Autra on the edge of the box. His relatively tame shot clearly takes a deflection and wrong foots the Dragons' keeper to put the visitors one goal up. Minutes later, he was unlucky to be flagged offside when he had a clear run at goal and just the keeper to beat. It was an awful decision from the lino but we went in for the half-time break still one goal to the good. 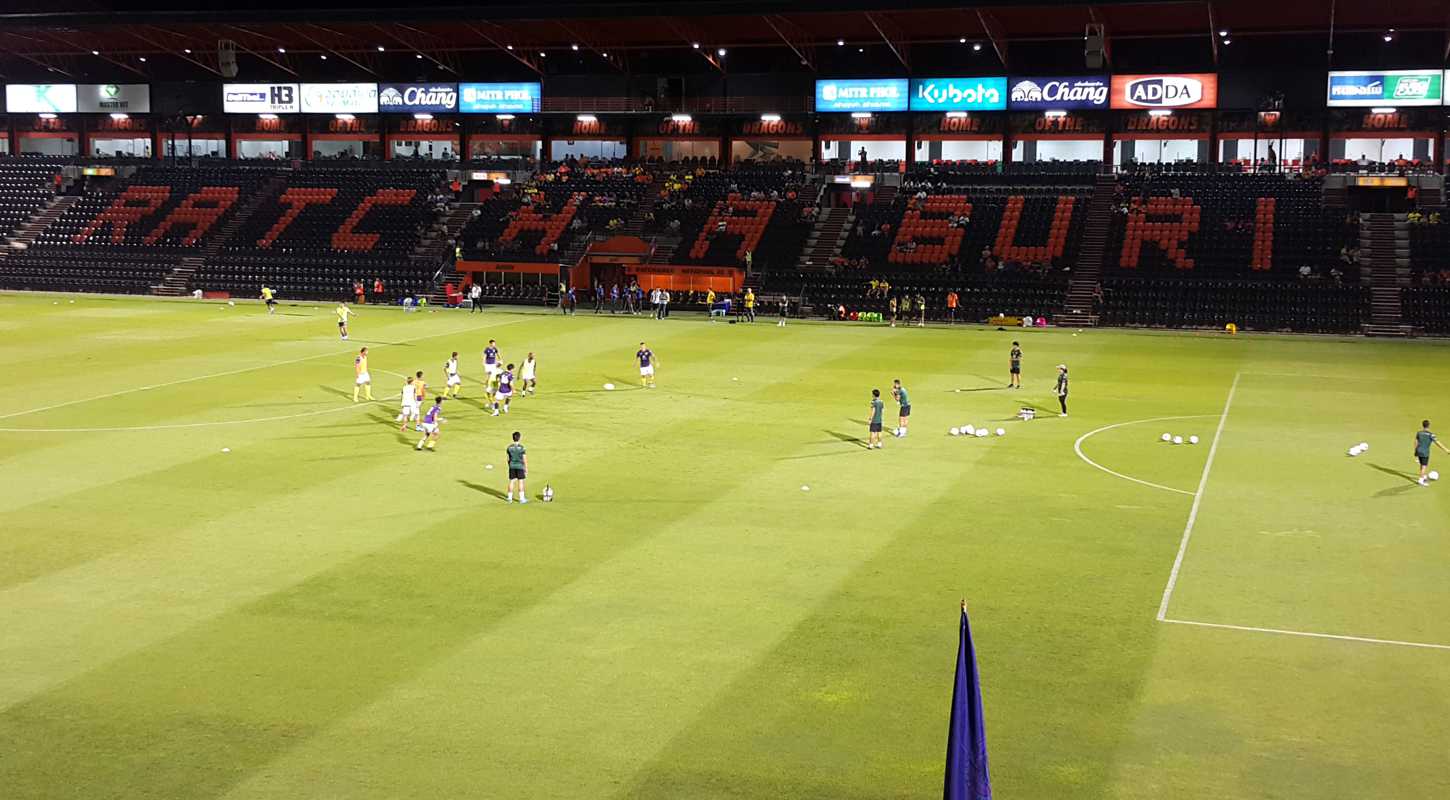 A long 45 minutes ahead?

It felt far longer than 45 minutes in the end and yet it all started so well. Just two minutes into the second period, Jakkapan floats a free kick into the box and an unmarked Picha Autra is there to loop a header over the keeper to score his second of the evening and put Samut Prakan 2-0 up.

Strangely, I had a gut feeling that a two-goal buffer still wouldn't be enough. A feeling that the contest was far from over. But even I couldn't envisage what was to follow in a 35-minute spell of crash, bang, wallop!

56 minutes - Samut Prakan defender, Krailas, loses the ball on the edge of his own penalty area, gifts it to Lossémy Karaboué, and he pulls one back for Ratchaburi with a neat shot.

62 minutes - more poor defending from Samut Prakan and danger man Yannick Boli adds his name to the scoresheet. We're all square at the Mitr Phol.

71 minutes - and the third goal was coming. Javier Patiño hits a screamer and puts The Dragons 3-2 up. There are a number of choice obscenities from the travelling supporters around me.  I know just how they feel.

79 minutes - Samut Prakan have made a couple of substitutions but it's all to no avail as Korean Yoo Jun-soo adds a fourth for the home side.

92 minutes - Jakkapan Pornsai gets in on the act with Ratchaburi's fifth. Enough is enough. I'm just begging the ref to check his watch, blow the whistle, and we can all go home.

Eventually, the final whistle goes and we're put out of our misery.  Ratchaburi record their biggest win of the season. 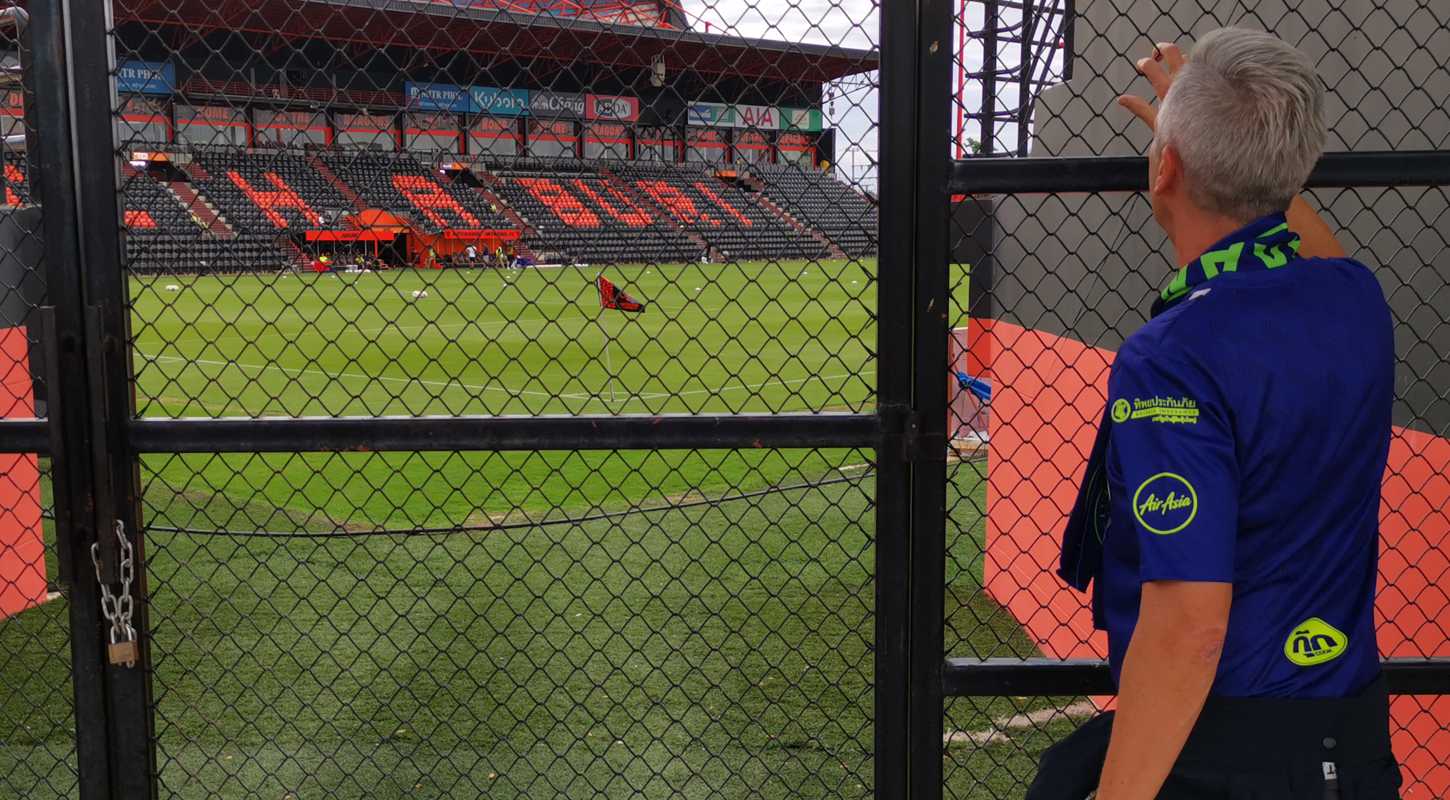 We haven't become a bad team overnight but the number of goals we are shipping defensively is worrying That's 16 goals we've conceded in the last five games and four of those games have ended in defeat. We've lost our mojo and we need to get it back fast.

Not surprisingly, the players looked very dejected when they came over at the end to applaud the fans. Perhaps they too can feel our fairy tale bid to become premier league champions slowly slipping away. And yet with Buriram and Bangkok United also losing this evening, there are still only five points separating the five clubs at the top of the table. It's still all to play for!

A hugely disappointing defeat but the chance to catch up with an old friend and to savor a game of football in a wonderful stadium - so perhaps not all doom and gloom. 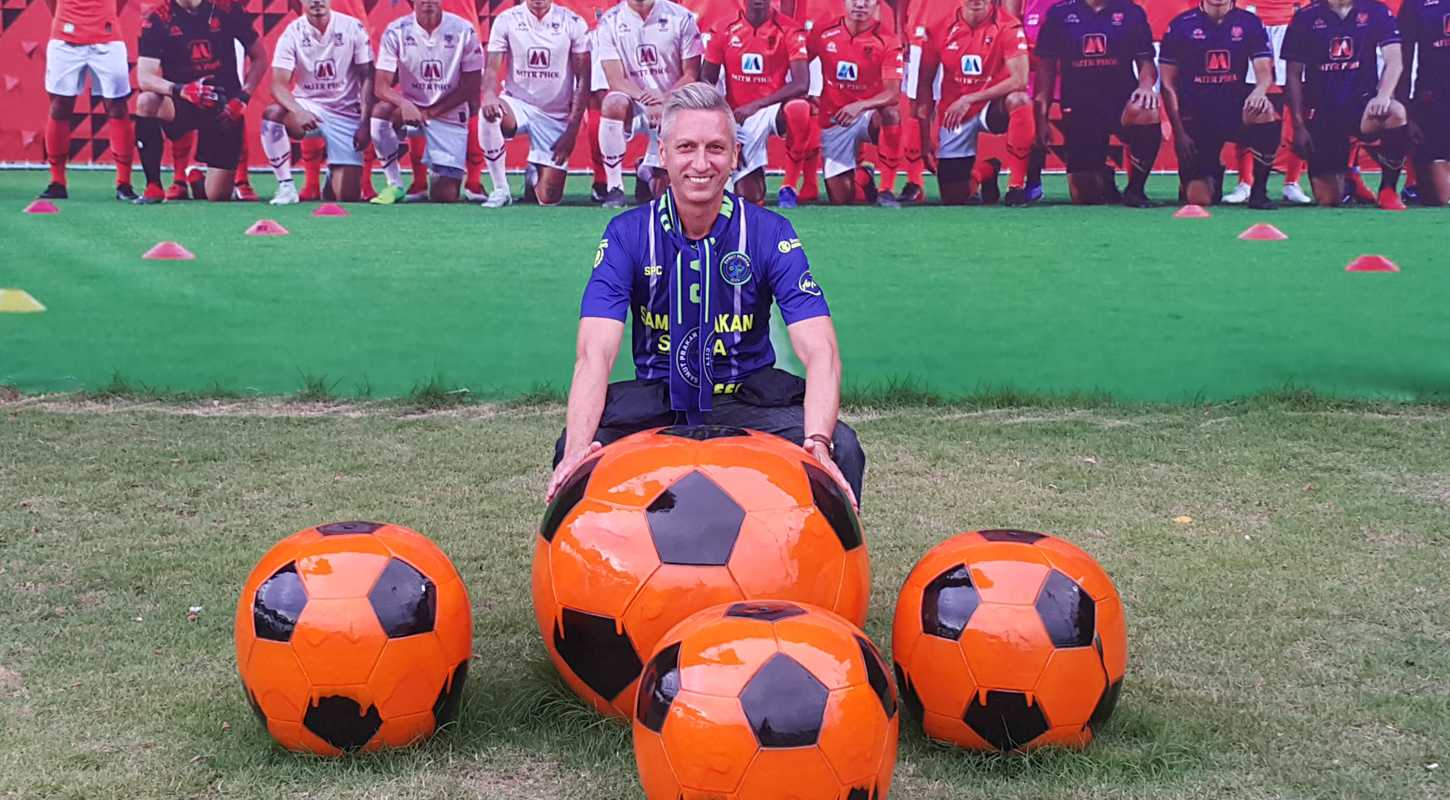 Not much time for a rest. We are back in action this Saturday with a home game against Trat FC. Kick off 5.45 pm. And oh boy, do we ever need a win and three points!

An interesting read. I was surprised you had 50 supporters. It looked less to me. However, man for man, they had to be the loudest travelling football supporters I've heard. Even at 5-2 they were still drowning out the jubilations of the Ratchaburi supporters. Well done guys.