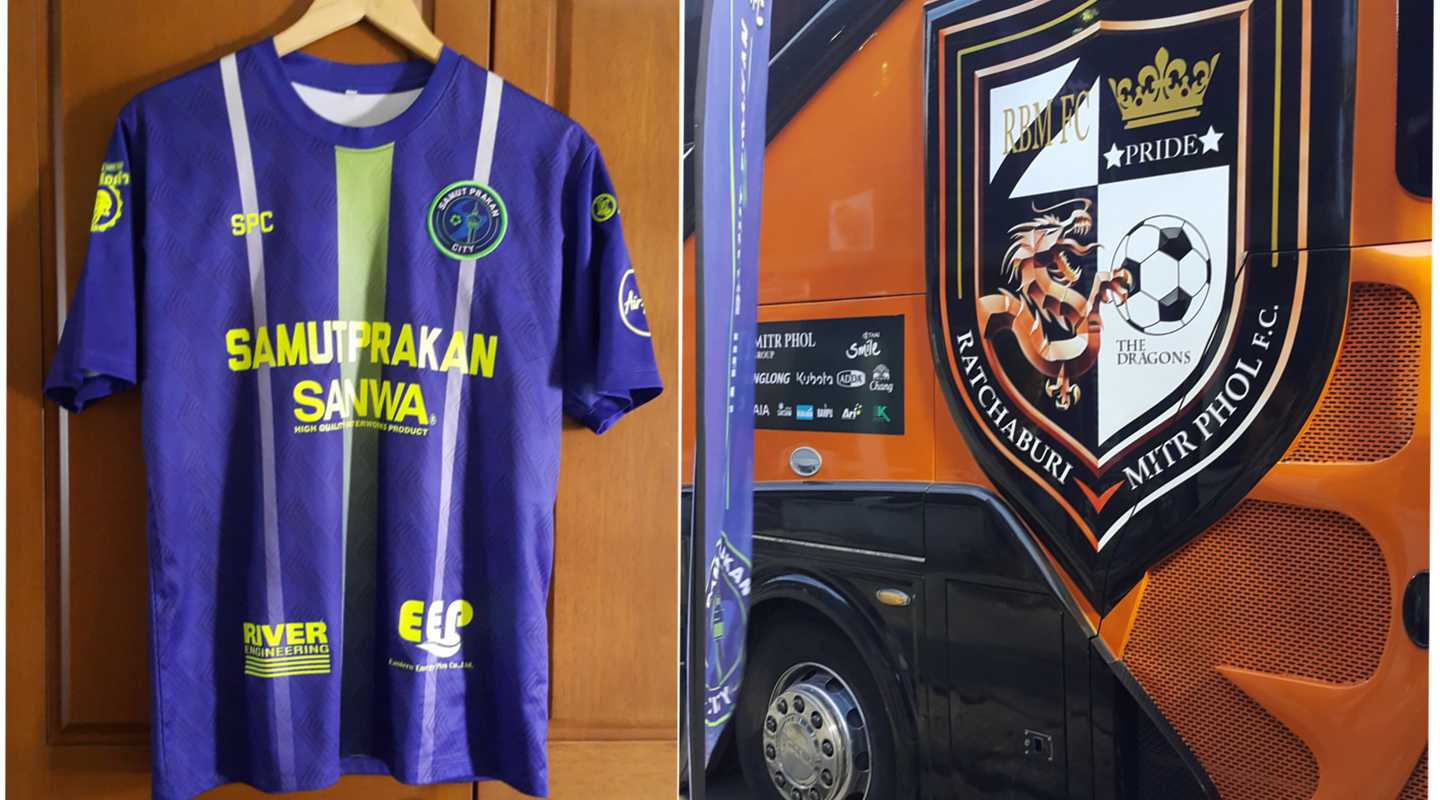 In the Premier League, Samut Prakarn traveled to Buriram in North-east Thailand to play the reigning champions and the team sitting second in the table.

It was always going to be a tough game against arguably the country's top side but we gave a good account of ourselves and matched them in every department.

After probably having the best of the first period, Samut Prakarn went 1-0 down to a counter-attack just before half-time.  In the second half, a 65th minute penalty gave Buriram a 2-0 lead and four minutes later, a fine pinpoint cross and header put them three-up and that was effectively game over.

But it wasn't over.  Samut Prakarn pulled back two goals in quickfire succession to set up an edge-of-the-seat final five minutes. We then had chances to level the scoreline and complete an incredible recovery but it just wasn't to be. Final score - Buriram 3 Samut Prakarn 2.  Unlucky lads, very unlucky. (Match highlights)

Need to get the season back on track?

Yes, we've slipped down to mid-table and after winning our opening couple of games, we're without a victory in the last three. So three points tonight please, lads!

So who are the oppos?

This evening we welcome Ratchaburi FC (The Dragons) and any of their supporters who have made the two-hour journey by road.

Ratchaburi, or Ratchaburi Mitr Phol Football Club to give them their full title, were founded in 2004 and several times they have finished in the top six of Thailand's top flight.  However, they made a poor start to this campaign and after losing three of their opening four matches, Spanish manager, Francesc D'Asís Bosch, was shown the door marked 'salida'.

AC Milan legend, Marco Simone, took over the reins a couple of weeks ago.

On Sunday, in Simone's first game in charge, they had a very decent 2-0 win against 'top four side' Muang Thong United (new manager syndrome?) so they'll be approaching tonight's game full of confidence.  As the league table stands, it's 7th against 9th - so a good old mid-table tussle in prospect.

Ratchburi play home matches at the purpose-built Mitr Phol Stadium - a 10,000 capacity, all-seater stadium, which is rated by many Thai League aficionados as one of the nicest places in the country to watch football.  I'm hoping to see the ground for myself when the two clubs lock horns again in July.

Who are the players to watch?

Striker Yannick Boli from The Ivory Coast is undoubtedly one of the star attractions. His previous clubs include Paris St-Germain, where he made a handful of appearances over a decade ago. He eventually found his way to Thailand via China, Bulgaria and The Ukraine, to name just a few countries in a footballing career that's gone hand in hand with a passport full of visa stamps.

Kang Soo-il is a striker in his early thirties with plenty of experience back in his native Korea and a man with a reputation for an eye for goal.

Both players scored in the 2-0 win against Muang Thong at the weekend. 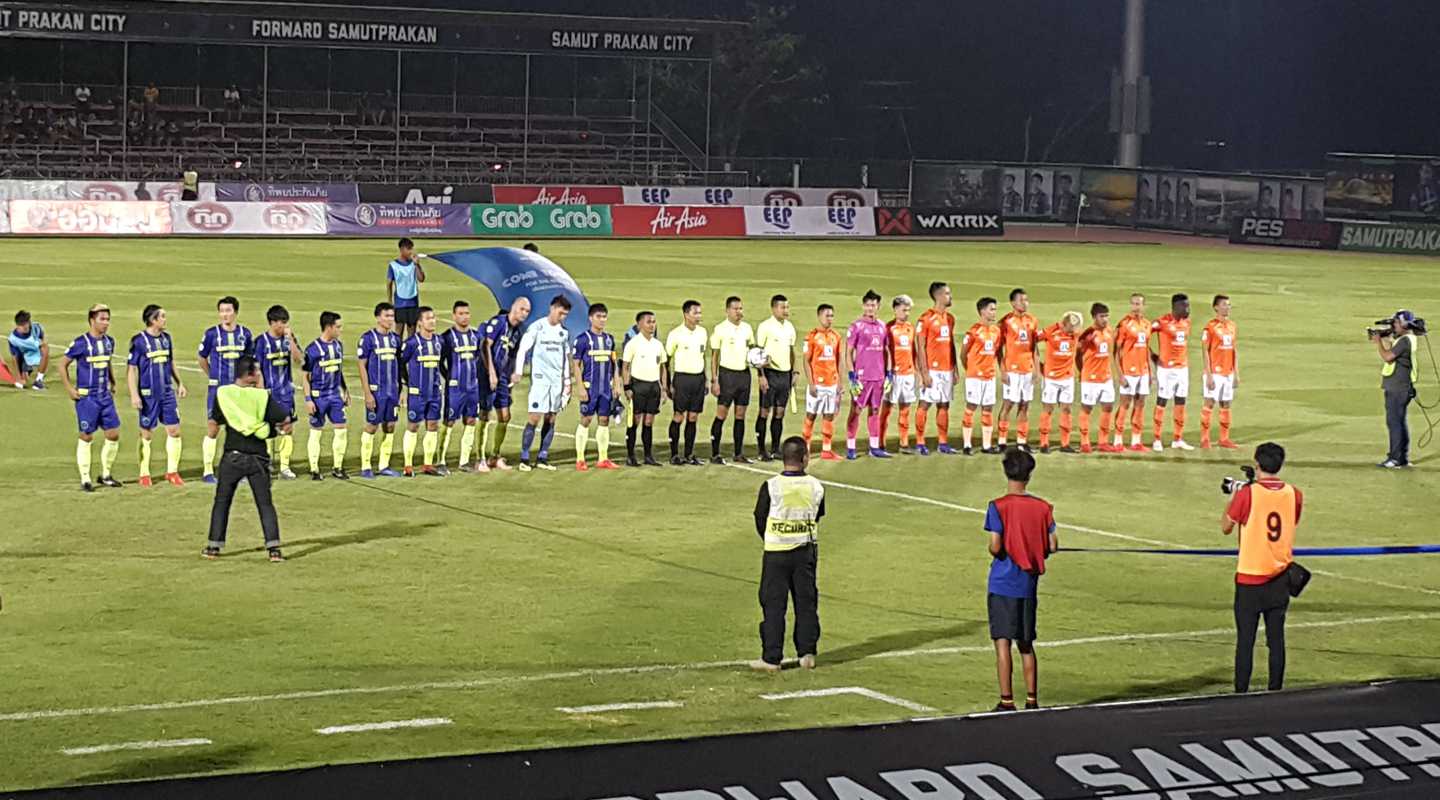 You're on your own tonight then?

Well I was and now I'm not.

The 7.00 pm Wednesday night start means my wife can't really get away from work in time.  We are also off to Japan on Saturday for nine days so she's probably preoccupied with packing her suitcase for colder climes and taking hours to decide which jacket to take. You know how women are?

However, it's a shame to waste her season ticket, so I've invited a good friend along for the evening's entertainment. I thought this might be Richard's first ever Thai League experience but he tells me he's been to a handful of Muang Thong games when he worked in the area.  Not only that but back in England, he was a Reading season ticket holder for ten years and followed them all over the country.  He certainly knows his football.

Although it's nice to have the company, I've actually always enjoyed football as a solitary man's pastime.  Back in my England days, I would regularly catch a train to watch a match at Walsall, Wolves, West Brom or Coventry or make the short bus ride to Villa Park or Birmingham City to take in a midweek League Cup game. Very rarely did I go with a mate.

So to the game itself. First half?

It looked like another pretty low turnout, although the stadium filled up somewhat once the match got underway.  And then five minutes into the first period, the Heavens opened.  Rain? In April? What's that all about?

There then followed ten minutes of chaos as soaking-wet supporters from the uncovered sections sought refuge and shelter in the more expensive covered section where Richard and I were sitting.  The gatecrashers proceeded to stand or crouch in gangways, completely blocking our view of the pitch.  And the useless stewards just stood there and did nothing.

I wasn't having that. I starting tapping people on the back and telling them to sit down, lie down or do whatever they had to do to get out of my f***ing way.

I sensed I was beginning to make myself unpopular but listen, this is how it goes. I purposely paid a premium price for a seat with a roof over my head because this is Thailand and when it rains, oh boy does it rain.  If you paid for a cheaper seat in an uncovered stand, then that was your choice. If it rains, you're going to get wet.  It doesn't give you licence to come and block my view of the match. Bring an umbrella next time.

Hmmm ...... I can see fun and games ahead when the rainy season truly kicks in.

As the rain came down, it slickened up the playing surface ( is 'slickened' a word?) and that suited Samut Prakarn because we're a passing, footballing side. We carved out several decent attempts on goal and had what looked like a stonewall penalty turned down.

Then on the half hour mark and completely against the run of play, it was danger man Yannick Boli, - a passenger for the first thirty minutes - who took advantage of a defensive slip-up to swivel in the box and fire the visitors ahead. Half-time - Samut Prakarn 0 Ratchaburi 1.

Samut Prakarn came out all guns blazing for the second half with some feisty tackles going in.  We were clearly determined not to drop points against this lot.

The equalizing goal came on 51 minutes, another fast-tempo attacking move from the home side, a sublime chip into the box from Ibson Melo and Chayawat Srinawong was there to slot home his first goal of the season from close range.

That's two penalties we've been awarded this season and both missed.

Captain Peeradol failed to hit the target against Chiang Mai in the opening home game and now Ibson Melo tonight.  May I make a suggestion as to what might be top of the agenda for tomorrow's training session?

Anyway, back to the game and we've moved into the 89th minute according to the stadium clock. Ratchaburi have just hit the woodwork in one of their rare forays into our goalmouth so perhaps we should settle for the draw and an unsatisfactory point? But Ibson Melo has other ideas. He latches on to a precise through-ball from Captain Peeradol, ghosts into the penalty area and smashes the winner to the diving keeper's right.

He removes his shirt, twirls it above his head and the crowd go wild.  He really is the star of the show. (five minutes of match highlights) 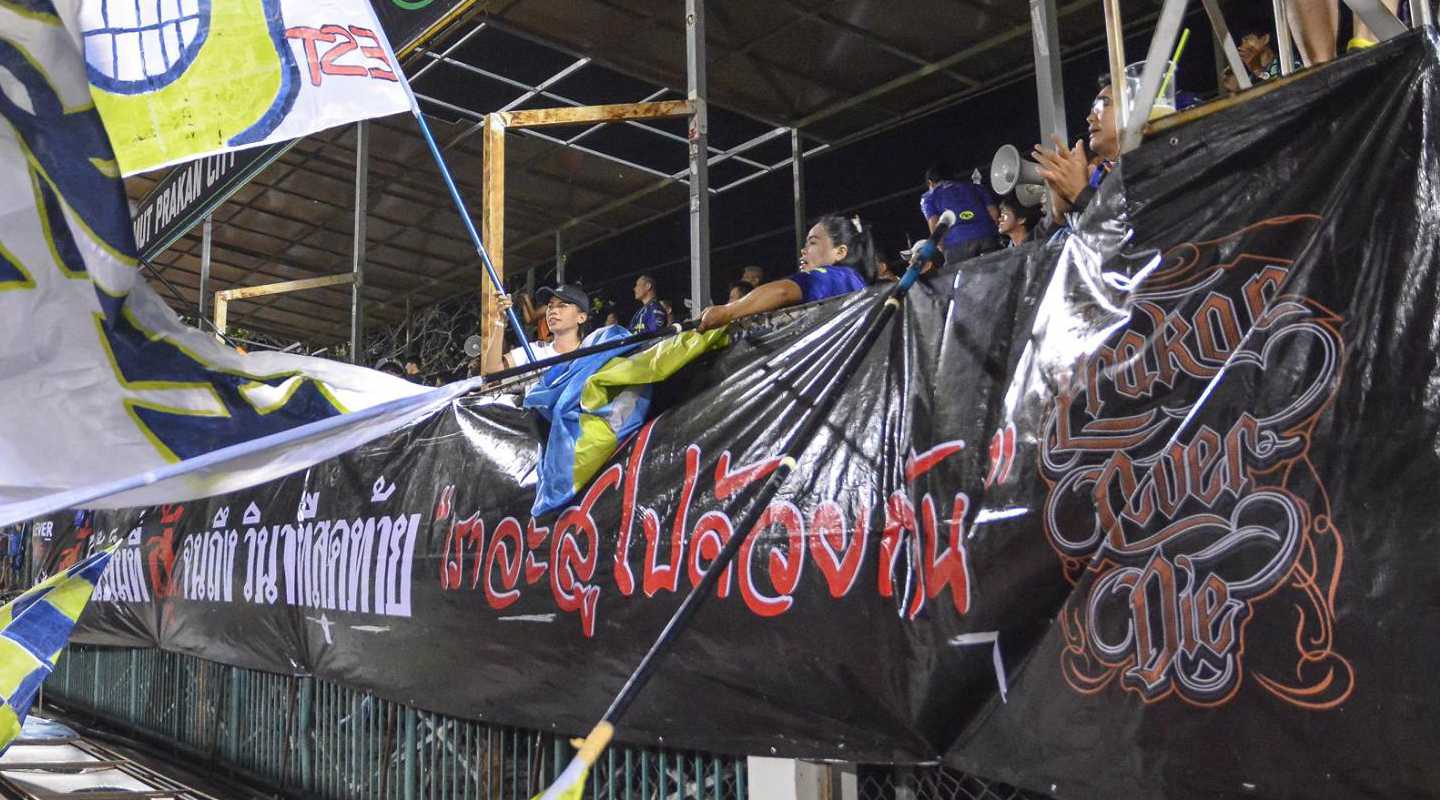 Another fantastic night in Bang Plee! Not a big crowd but a terrific atmosphere and we've ended up with the three points and moved up to fourth in the TPL.  I'm loving this Thai football lark!  At the end of the game, I had Thai supporters in replica shirts, complete strangers, coming up and high-fiving me.  A fellow farang supporter came down from the back of the stand to introduce himself along with his Thai wife.  This is what sport does - it unites people!

"A life without sport is no life at all". My Father drummed that into me from a very, very early age. And I'm so grateful to him. 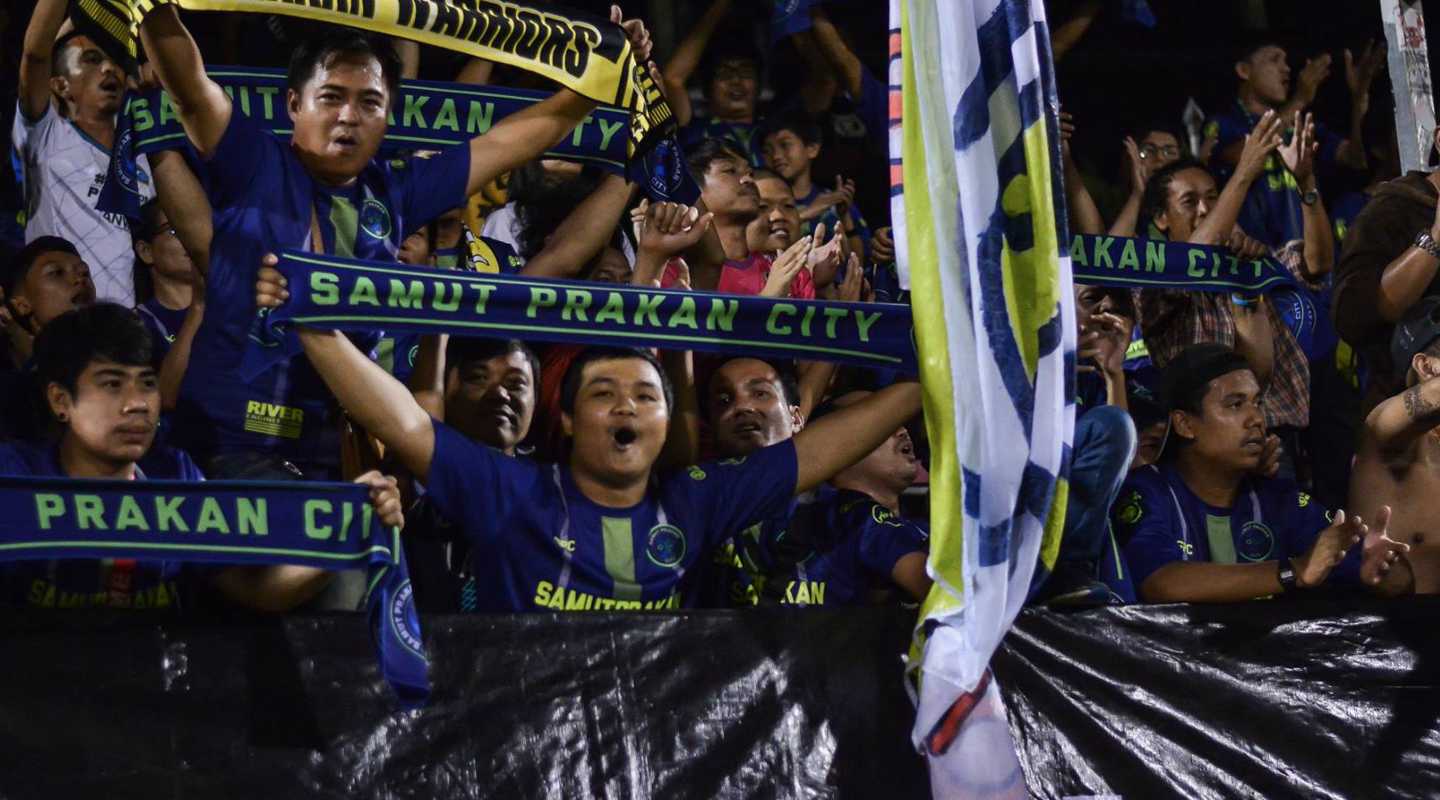 Did your mate Richard enjoy himself?

He had a great night. I was pleased. And walking back to the main road to flag down a taxi after the game, he made some interesting observations.

"What a lovely, homely little club" he said, "It was actually a very different experience to watching a game at Muang Thong, where the supporters seemed almost 'too serious' and winning or losing was a matter of life or death. I have to say that I enjoyed tonight far more"

Thanks Richard, We'll do it again soon.

Our next two games are both away fixtures.

This Saturday 6th April, we travel south to bottom-of-the-table Trat FC on the Cambodian border (the same day my wife and I fly to Japan so I'll be checking the score en route at Taipei Airport).

Then there is the break for the Songkran holiday before we make the trip north to play Chiang Rai FC on the 20th.  It's worth keeping an eye on the latter fixture though. Because the air pollution levels up north are so bad at the moment, there is a very real possibility the venue could be reversed.  We'll wait and see.

Despite being an hour's flight from Bangkok, Chiang Rai is actually a very doable away game.  Chiang Rai's Singha Stadium is barely a ten-minute walk from what I would imagine is quite a sleepy airport. So logistically you can catch a cheap afternoon flight up there, have a bite to eat, see the match and then get the last flight back to Bangkok.

I don't think I'll make the journey though. Perhaps another time. There are at least four home and away games coming up in May and fingers crossed, I'm hoping to see all of them!