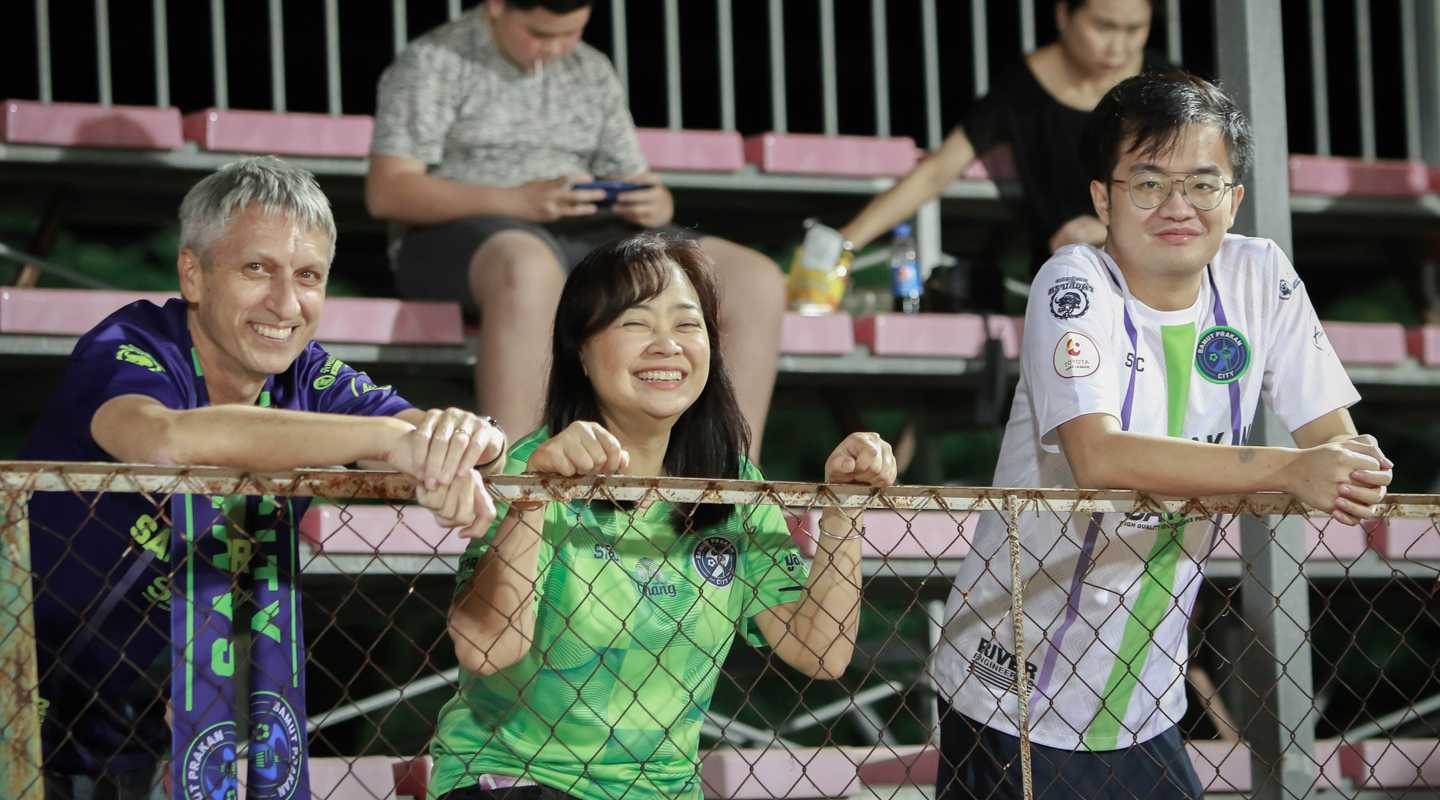 (Will there be smiling faces after today's match?)

This looks a very winnable game

You would've thought so. Chainat Hornbill have lost all five of their games on the road this season. They don't travel well!

Have the two clubs met before at Bang Plee?

Yes, in Samut Prakan's first season back in April 2019 (the season Chainat were eventually relegated to the second division). A less-than-inspiring contest ended in a 1-0 victory for Samut Prakan, with Picha Autra the second half match winner.

A bit of club background?

Founded in 2009 by a former politician, it took just two years for Chainat to win promotion to Thailand's top tier.  After a number of mediocre seasons in the premier league (never finishing higher than 10th) they were relegated to the second division in 2016 but bounced back at the first attempt the following year; promoted as champions in fact.

Their return to the top flight lasted just a couple of seasons before going down again in 2019. In the past couple of seasons, they've reached the T2 play offs on both occasions but just couldn't find enough in the tank to go all the way. The Hornbills perhaps came across as a club almost too good for the second division but not good enough for the first, which makes this season's struggle all the more surprising.

In his excellent pre-season preview, Rob 'Mr Championship' Scott had this to say about Chainat Hornbill - "Chainat is a club that is easy to admire with a focus of developing local young players and a stadium that is T1 ready. However, they may just not have the firepower this season". He predicted them to finish 9th. 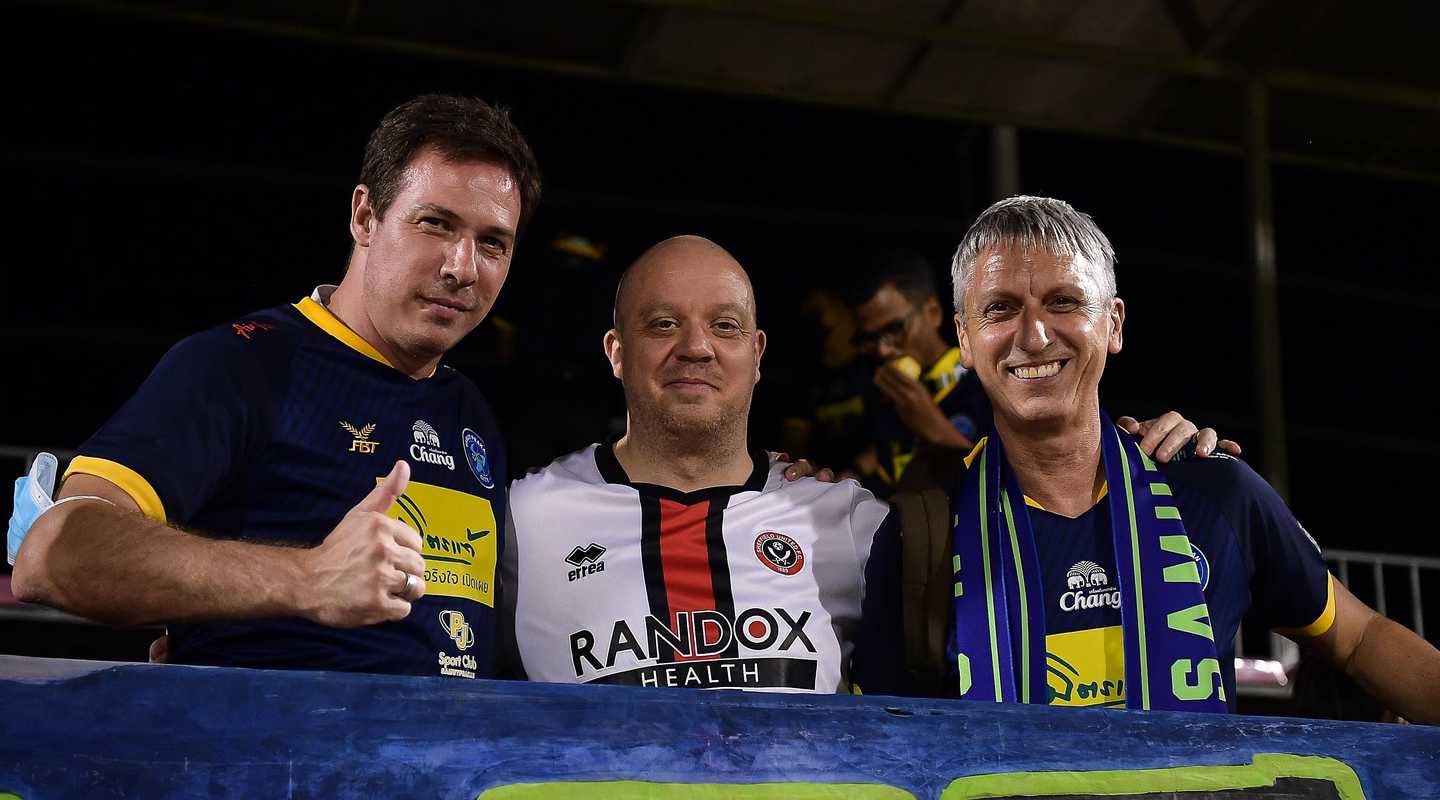 Who plays for them?

They have a Spanish defender by the name of Dennis Nieblas, who has rejoined the club after a season at Ayuthaya United. Racking up an impressive 15 clubs over a 12-year career, Dennis has even had a playing spell at a semi-professional side in The Faroe Islands.

Samut Prakan's leading goalscorer Padsakorn Sripudpong joined on a free transfer from Chainat at the beginning of the season. He was with The Hornbills for one year, made around 20 first team appearances and scored three goals. 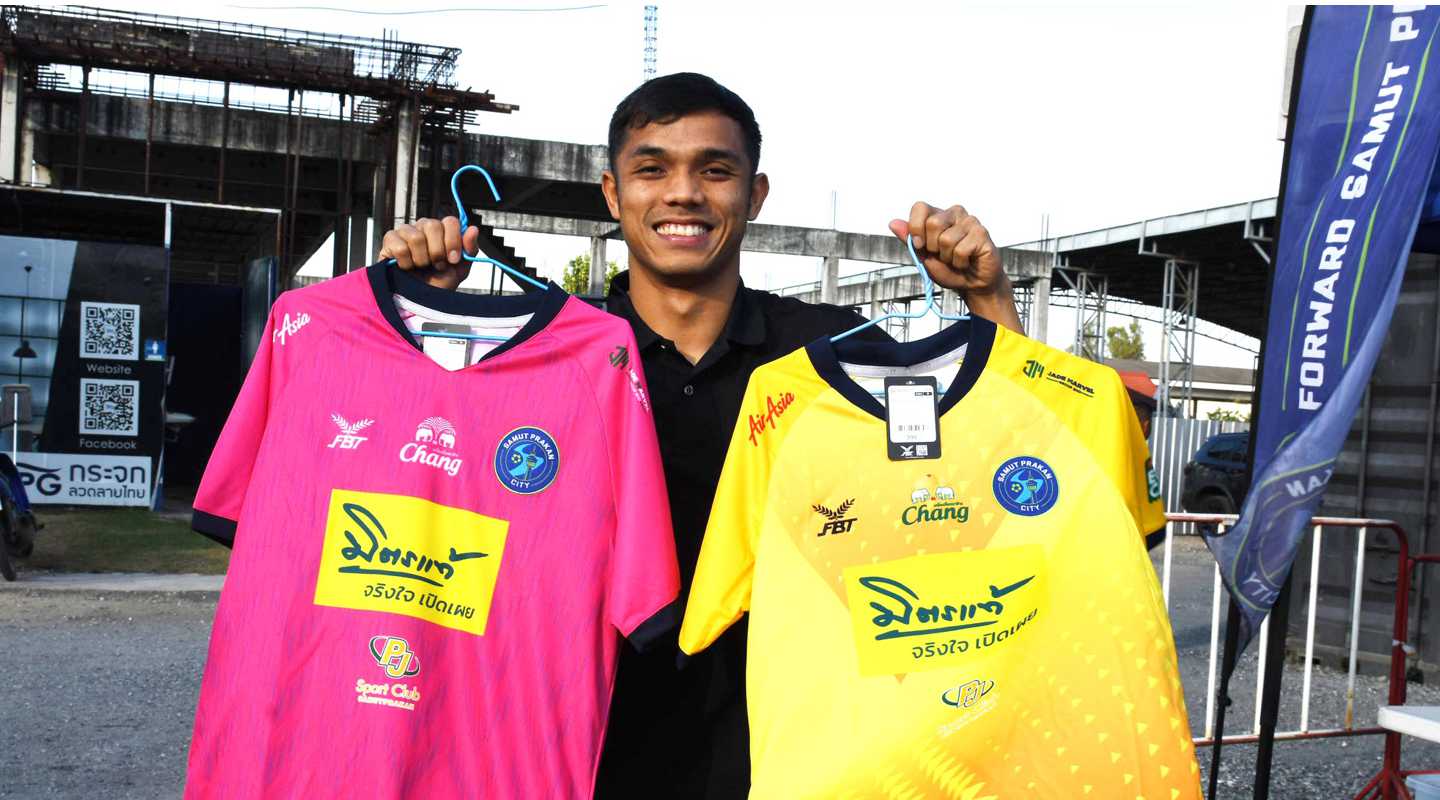 A pitifully low crowd of just over three hundred showed up for this one (including a modest turnout from Chainat) I was surprised not to see Evans Aneni feature in Samut Prakan's starting line-up after his MoM performance at Kasetsart last week, however there was a place for Moldovan striker Petru Lueca.

Before the match, and purely among friends, I predicted a 1-0 win for Samut Prakan and we reached that scoreline after just six minutes with a box-to-box peach of a goal. Sampan Kesi hoicks the ball out of defence to Pardsakorn, who jumps a tackle, hares along the left touchline and squares the ball for Yodsakorn to cooly apply the finishing touch.

With Samut Prakan in the ascendancy, Petru Lueca looks to increase the home side's lead but his long range free kick is straight at the Chainat keeper.

On the half hour, The Hornbills find a way back into the match as the unlucky Sampan Kesi is adjudged to have tripped Chainat striker Sarayut in the penalty area and the already unpopular official points to the spot. I've watched the replay back countless times and still can't make my mind up, but there's little doubt what the Samut Prakan fans around me think of the decision. Sarayut himself slots home the penalty to level the scores, although Thatpicha guessed the right way and was a tad unlucky to see the ball go under his diving frame.

Was the decision tactical but Petru Lueca is immediately hauled off and that's the end of the big Moldovan's evening, replaced by Karn Jorates. 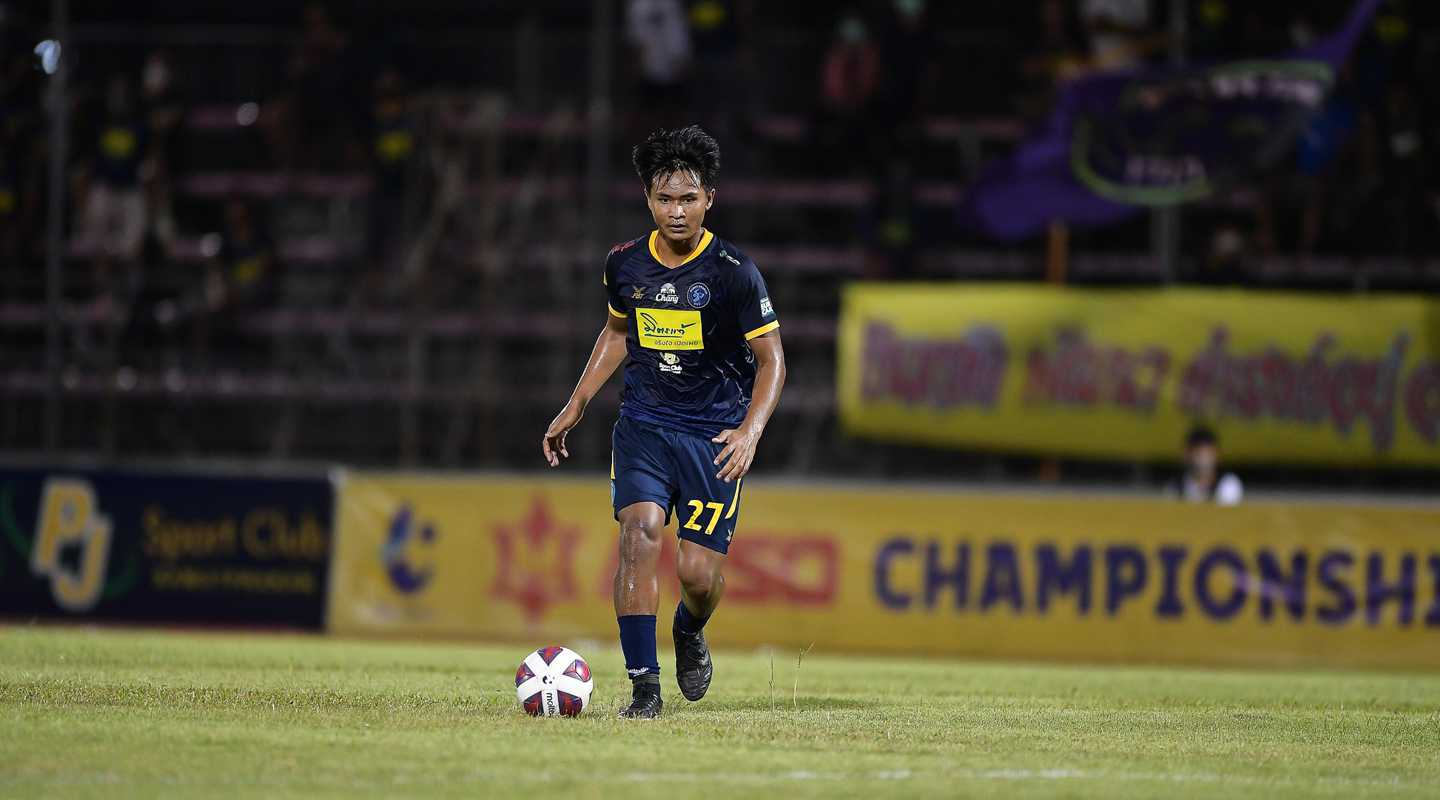 (The next Samut Prakan superstar maybe? Photo credit: Back of the Net)

Chainat make a bright start to the second period with Kritsada and Kiratikorn both off target with decent headed chances. At the other end, Karn Jorates' long range effort sails well over the crossbar.

On the hour mark, Chainat bring on Brazilian striker Diego Silva. The 31-year-old from Sao Paulo scored 9 goals in 23 appearances for Nakhonsi United before joining The Hornbills and he immediately looks lively, adding an extra zip to the away team's forward play. However, it's Samut Prakan who regain the lead after 77 minutes...and it's that boy Yodsakorn on target again.

Having just fizzed a long range effort past the post minutes earlier, the 17-year-old boy wonder grabs his second goal of the evening with a superb glancing header from a pinpoint Phongsakon centre. As we enter the final minutes of the contest, only the width of the woodwork prevents him completing his hat-trick.

Samut Prakan fans are genuinely getting excited about this young man. Could we have the next Jaroensak Winggon on our hands? He looks fearless and brimming with confidence. All he wants to do is get possession of the ball and score goals. The boy looks to have one hell of a future!

Sadly, an enjoyable evening's football doesn't end well for the home fans. We're into the match's dying seconds as a right wing cross appears to get an unlucky deflection off a Samut Prakan defender, steering the ball into the path of Diego Silva, who bundles the ball home for the scruffiest of equalisers. The Samut Prakan players immediately surround the referee with wagging fingers, feeling that late substitute Evans Aneni was fouled in the build-up. The heated exchanges continue well beyond the final whistle. 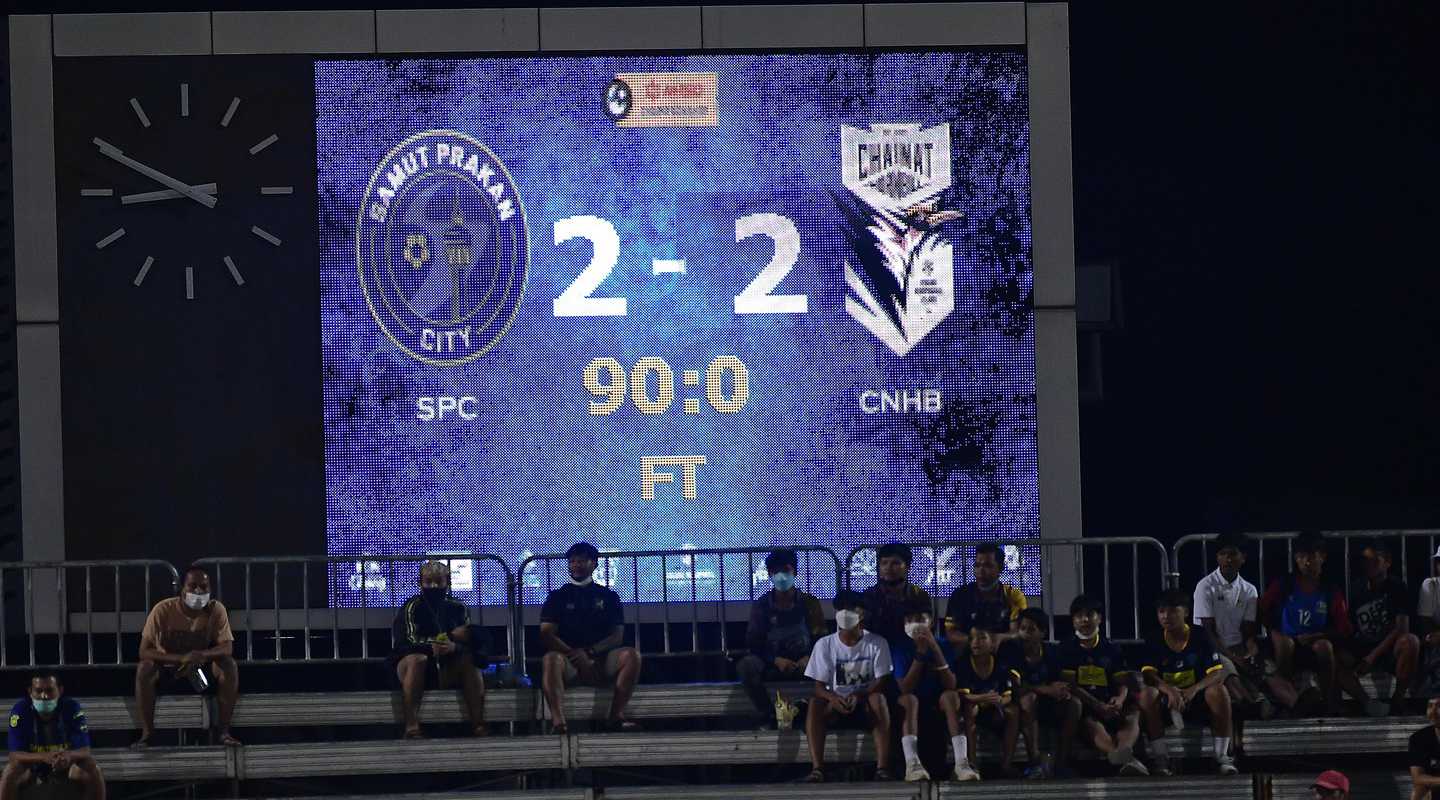 (Photo credit: Back of the Net)

That was a very enjoyable contest. Yes, it's always disappointing to concede a crucial last-gasp goal, even worse when it's against a side that haven't won a single point on their travels, but Samut Prakan played some good football tonight. I'm confident we're only going to get better and better.

There aren't that many games where you hear the referee get roundly booed off the pitch but tonight was one such occasion. He got many of the big decisions wrong.

With perhaps a certain degree of reluctance, yes. But more on that in the Buriram blog.