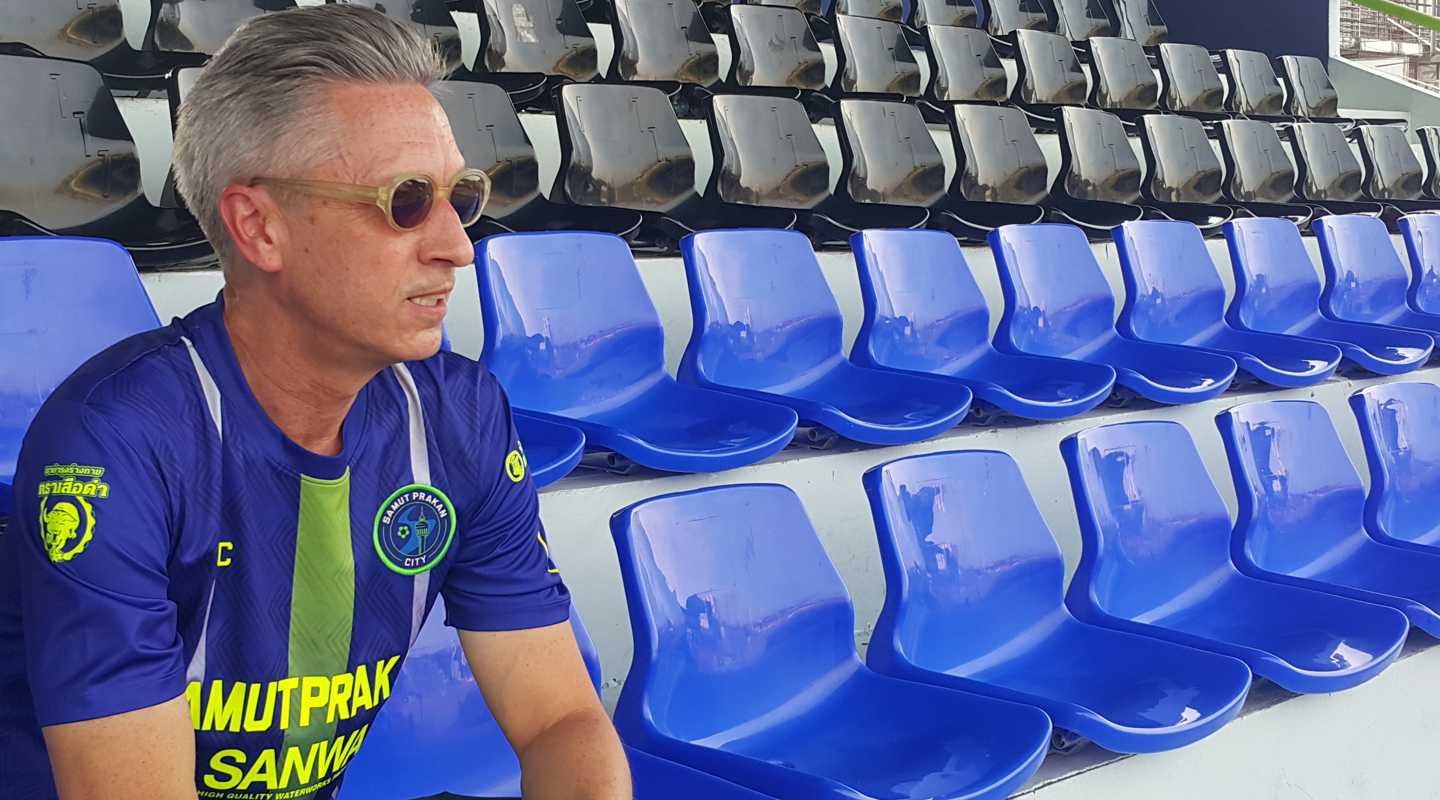 We've played two away games and both ended in 1-1 draws.

Firstly a 1-1 draw at Trat, with Ibson Melo on target to score his fourth goal of the campaign. A somewhat disappointing result though given that Trat were bottom of the table. (highlights)

Then came the Songkran holiday before the team traveled to the polluted north to take on third-place Chiang Rai, who were boasting just one defeat in their opening seven matches.

A very tough game in prospect but once again Samut Prakarn gave a good account of themselves and came away with another credible 1-1 scoreline. And it was that man Ibson Melo again, with an 18th minute opener before Brazilian, William Henrique, equalized for Chiang Rai on 52 minutes.

We were under the cosh for long periods of the second half but still had the best chances to take all three points in injury time; however, a draw was probably a fair result. (highlights)

So who are the oppos tonight?

This evening we welcome Chainat FC (The Hornbills) and any of their supporters who have made the three-hour journey by road.

Founded in 2009, Chainat won promotion to Thailand's top tier in 2011.   After a number of mediocre seasons (never finishing higher than 10th) they were relegated to the second division in 2016 but bounced back at the first attempt the following year; promoted as champions in fact.

Last season, with five relegation places waiting to swallow teams up, it went right down to the wire - but Chainat survived.  This is a team that likes a scrap.

Chainat are currently lying 10th in the TPL table with Samut Prakarn in 5th.

The Hornbills are managed by Dennis Amato. As a professional footballer in his native Germany, his career amounted to just 29 first team appearances for Mannheim and Mainz - and that was almost 20 years ago.  But he's doing a decent job as manager of Chainat.

Not sure if they have played much this season but Gorka Unda is a Spanish midfielder who's been around in the Thai Premier League a number of years and once played for Real Madrid's B team.  And if that doesn't take your excitement to another level, there's Brazilian Ricardo Santos, who's played professionally in Norway, Sweden, China and Japan.  In fact, according to Wikipedia, Chainat is at least his 11th club.

29-year-old Leandro Resida is a winger from Amsterdam, with plenty of experience at a host of Dutch League clubs (most of which I can't even pronounce)

You're feeling confident then?

Actually, no.  Although Chainat have the smallest budget of any team in the TPL, they're having a pretty decent season - won two, drawn three, lost two - with both of their victories coming against supposed 'top four sides' (Bangkok United and Muangthong)

Tonight's game definitely has a potential banana skin feel to it.

Cheers! Don't think I've ever been to a football match on my birthday before. 55 years old. Bloody Hell! Anyway, three home points would be the perfect birthday pressie wouldn't it?

Who's along for this one?

My wife can't make it tonight unfortunately.  She has to work a fixed number of Saturdays per year (it's about one in four if you average it out) and today is one of those Saturdays. My good friend Richard is more than happy to accompany me again though.

On a side-note, how are the attendances going for Samut Prakarn home matches?

Well, we had an almost capacity 5,000 for the first home match against Chiang Mai (but many tickets were given away as pre-election freebies so difficult to take that figure as any kind of yardstick)  That number dropped to around 2,800 for the second home game with Sukhothai and then only 1,400 turned up for the midweek match against Ratchaburi.  However, speaking with Thai footie experts on social media, midweek fixtures are notorious for low attendances so perhaps you can't read a lot into it.

But for the serious number crunchers, Samut Prakarn's average home attendance of 3,072 currently puts them rock bottom of the TPL attendance table.  Top of the list are Nakhon Ratchisima with a very impressive average of 15,189 fans turning up for home games.

Let's hope we can get back up to the 2,500 to 3,000 figure this evening but no disrespect to Chainat, they aren't the most glamorous of opposition.  Plus it's a relatively early 6.00 pm kick off and that doesn't do you any favours either.  I wonder how many football-loving but henpecked males are still being dragged around the supermarkets and shopping malls by their partners? 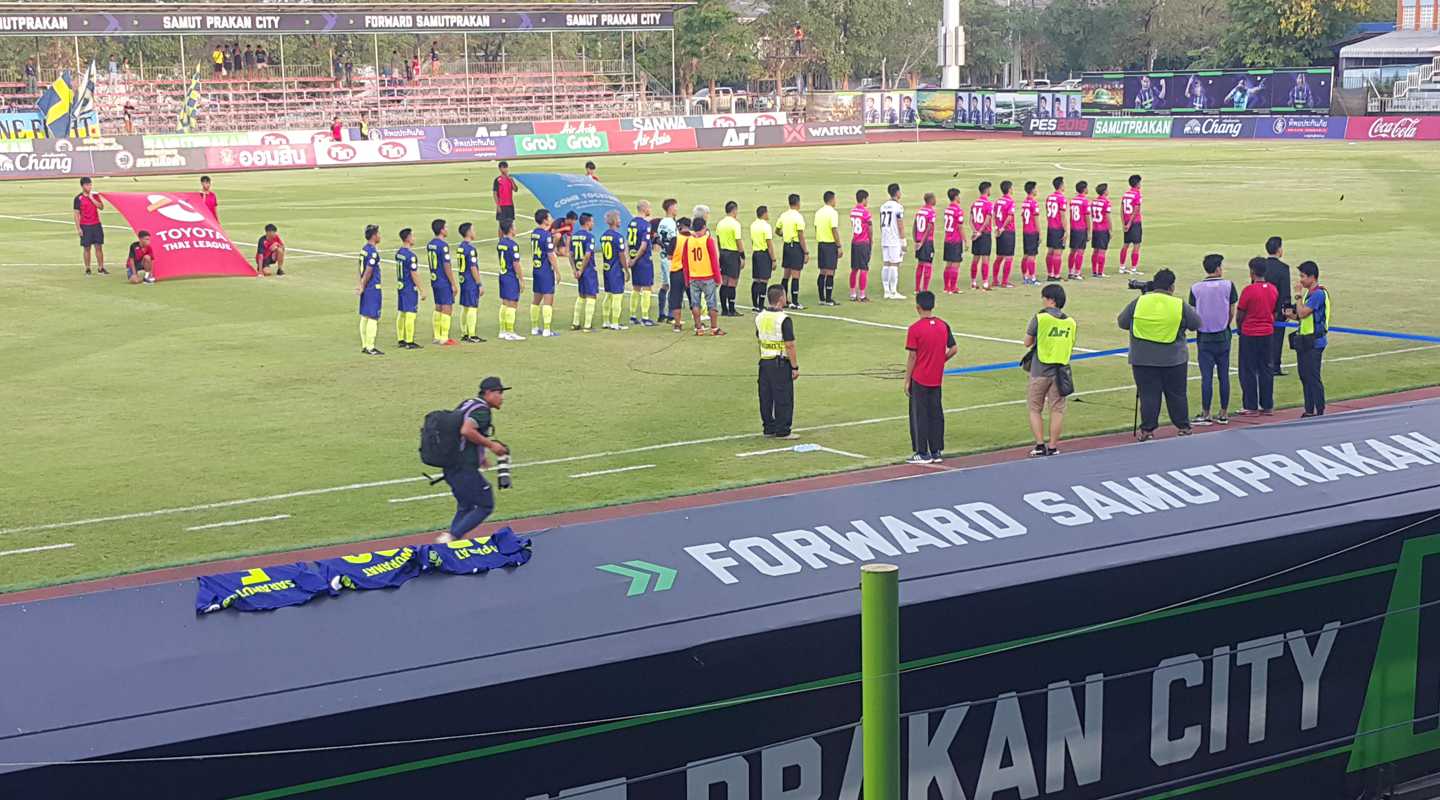 So how was the atmosphere before kick off?

An hour before kick off, the streets around the ground were buzzing but not with people going to the match.  There was some kind of street-fair going on with food stalls, pop-up restaurants and clothing vendors, etc. It felt rather like a temple fair but without the temple.

The attendance looked very poor when the game started, but once again the stadium filled up nicely when the game got underway.  Thai football fans certainly like to arrive late for football matches. I'm guessing there were probably about 2,000 there.

How was the first half?

In a word - uninspiring.  Defences were on top and chances were few and far between.  It all felt a bit flat on such a warm and humid evening.  The only danger from Chainat was when they got the ball out to Dutchman Leandro Resida, because he clearly had a trick or two in his locker and was going past defenders with ease.  However, he wasn't given the service and ended up rather under-utilized by the away team in pink.

As the ref was about to blow for half-time, Chainat spurned the best chance of the first 45 minutes with a header skimming the post from a right wing cross.

The highlight of the first half was probably seeing Captain Peeradol and Kyaw Ko Ko emerge from the tunnel with brand new dyed hair jobs - a sort of 'spacesuit silver'.

And the second period?

Much better! It took just two minutes for Samut Prakarn to open their account.

After a goalmouth scramble, the ball found its way to Picha Autra on the edge of the penalty box and he made no mistake with a fizzing low shot into the bottom corner. I was pleased for the young man because he's been absolute pants in the last couple of games.

The first 15-20 minutes of the second half was easily Samut Prakarn's best period based on the number of chances created, however Chainat weathered the storm and slowly felt their way into the game but without ever looking threatening. Once star man, Resida, limped off midway through the second period, any hopes of an equalizer seemed to evaporate.  You felt that one goal was going to be enough to take all three points - and so it proved. Final score - Samut Prakarn City 1 Chainat 0  and The Sea Fang move up to third in the TPL. 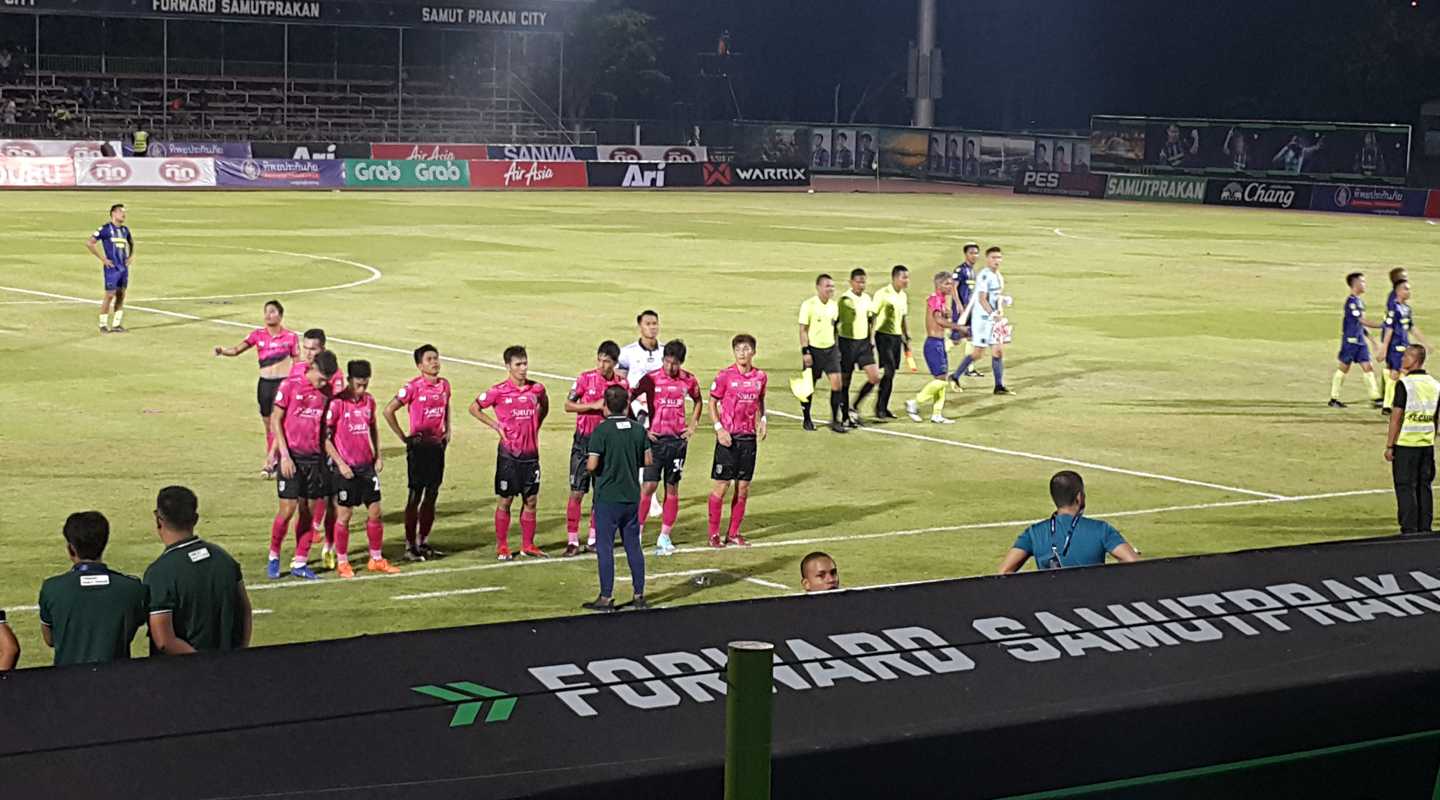 The whole occasion felt very low-key. Kick off too early? Weather too hot? I don't know.

In their infinite wisdom, the club had decided not to sell any tickets on the day of the match for my regular seating section, so come kick off, it was completely empty bar me, Richard and about a dozen other season ticket holders.  This club handles ticket sales in some very peculiar ways indeed.

And next to us is the VIP section, crammed with people who look like they've never been to a football match in their lives. There are mothers with babies, obese teenagers playing games on smartphones, hot totty with spray-on jeans perhaps looking to snag themselves a footballer, you get the picture. I have no idea what they're doing there.

On the pitch, we got the job done - but if you were to label this our weakest performance of the season, I wouldn't disagree. It would be difficult to pick a man of the match because no one really stood out.

Even the great Ibson Melo probably had his worst game in a Samut Prakarn shirt and spent far too much time throwing his arms in the air and berating team-mates for sloppy play.

Chainat didn't impress me at all. Hard to believe that they'd just recorded back-to-back wins against Muangthong and Bangkok United because they offered very little going forward. Perhaps both teams caught each other on an off night. (match highlights)

And a bit of green-eyed monster has crept in?

Well, later on in the evening, Port FC went four points clear at the top of the table with a thrilling 3-2 win over Suphanburi.  An 87th minute winner, a near capacity crowd and a white-hot atmosphere. I looked at the photos on social media and you couldn't help but feel a tad envious.  Following Samut Prakarn City just felt like following a very small-time club this evening.

Games come thick and fast in the merry month of May, starting with an FA Cup game on Wednesday against a real non-league minnow from the Chiang Mai area. 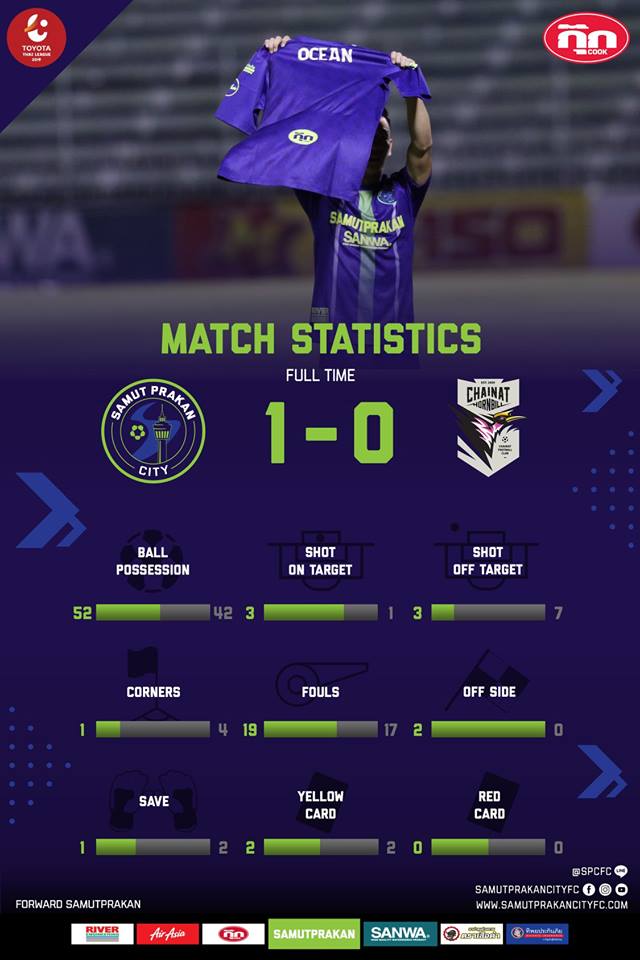