Teenagers are the most prolific social network users - on average spending over 2 hours a day on these sites (although I'm pretty sure some teens are online constantly from the minute they wake). But there's no need to be alarmed because recent research has concluded that using social networks is actual good for students as it provides a platform for them to develop critical thinking skills.

While ‘playing' online these students are actually engaging in a wide range of higher level thinking skills such as - inferring, analyzing, summarizing, composing, creative thinking, and decision making.

Unfortunately (from an English teacher's perspective) most Thai students use Thai while they are communicating on social networks. Now, without trying to sounding too idealistic, wouldn't it be great if students could use some of this time developing their English.

This was the thinking behind a project I started with my Mathayom 3 students - 'A Tweet a Day'.

The project actually worked really well and the students loved it so I wanted to share this idea with other Mathayom / University teachers.

I chose Twitter for this project because
- Tweets are limited to just 140 characters so students need to be concise
- Twitter accounts don't have huge amounts of personal information like FaceBook accounts do
- Not many of my students actually knew how to use Twitter
- By asking the students to use hashtags ( #atweetaday #m3english etc..) it was quick and easy to find and check their 'work'.

I started my project on a Monday and I spent the lesson discussing online social networking, asking the students which sites they used and how often. We then discussed the phenomena of social networking - 'why are they so popular?'

I then had the students work in small groups a draw up 'the rules of Social Networking' asking them to focus on online etiquette and online safety.

Finally, I explained the 'A Tweet a Day' project and set the students their first homework - set up a Twitter account and introduce themselves using at least 2 adjectives

The use of hash tags was essential for monitoring and for the students being able to communicate with each other. I choose hash tags that weren't being used such as #M3eng (my class name) and #VareeEP (school & programme). I explained that each and every homework tweet needed to use one of the hash tags.

I explained to the students that their work on this project would be graded and they were all required to complete the homework each day. I would also quickly review the homework each morning - sharing good examples with the class and questioning any students about missing Tweets -‘ the internet was down' quickly became the most popular excuse!

Here are examples of the homework I set -

At the end of the project we shared some of the favourite tweets and I asked for students to give their feedback on the project. Generally the students were positive about the activity and many of the students asked if it could be continued.

As a teacher I found the project particularly useful for reviewing new grammar and new vocabulary - checking that students had understood and were able to apply new concepts was quick and easy. I also found this useful because it gave the students opportunity for authentic ‘real world' application of their English skills, something that is difficult within the confines of the classroom.

Finally something that surprised me was how much more confident the students were communicating through social media. We've had class discussions in the past about how to improve school but not a lot goes past the ‘better food in the canteen' stage. On social media the students were far more forthcoming as you can see from the tweets below. 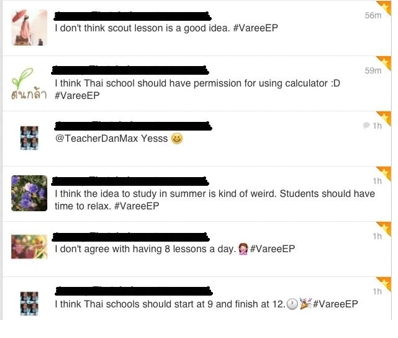 I actually continued using Twitter for homework assignments - although not on a daily basis ! - and I've found that it is a medium on which the students enjoy communicating.

With the new school year starting in just a couple of weeks I am planning to run the project again with my new class and I'd recommend it to other mathayom/university teachers. I'd be interested to hear from anyone that has tried this or something similar. 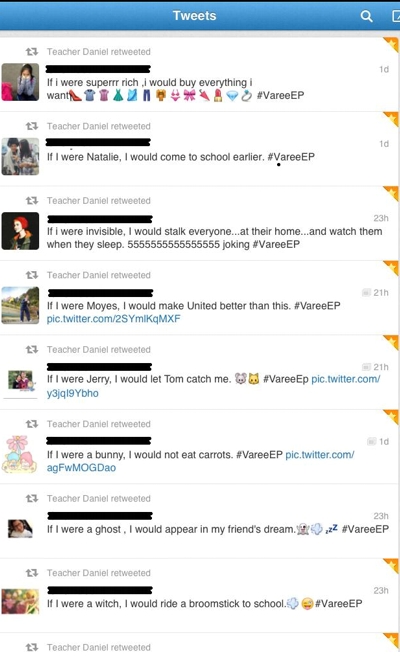 Daniel this is an excellent idea that you've came up with. I only wish you had came up with this idea a bit sooner like 7-years ago when I was still teaching mathayom students in a Thai. government school. Great job Daniel. Thanks!

I appreciate this kind of idea where technology is utilized to aid our students improve their English lesson.
Why I did on my Prathum 5 student is quite similar to what is discussed here. I created a group page on facebook then post a photo and a question but I see to it that it is related to our week's lesson.