When actors are fluffing their lines and cardboard scenery keeps toppling over, there is a timeless expression used in theatre land - ‘don’t worry, it’ll be alright on the night’.

Hopefully that will also apply to Samut Prakarn City FC, as they prepare for their inaugural season in the Thai Premier league.

Having nothing better to do (and getting mildly excited about the upcoming season I might add)  I decided to journey out to the official Samut Prakarn City FC stadium in deepest Bang Plee and see for myself how preparations were going.

The stadium was a 35-minute GrabTaxi ride from my home not far from Samrong BTS. The driver was a pleasant young man who had lived in Samut Prakarn all his life. We talked about all things Thai football and he knew that Samut Prakarn City FC were about to play in Thai football’s top tier and that they were once Pattaya United.

However, he had never been to the stadium to see a game, in fact he didn’t have a clue where the stadium was. And despite being born and bred in these parts, he clearly had no intention of giving up his Saturday nights to cheer on the mighty ‘Sea Fang’.

I wonder how many more locals will share that attitude once the season gets underway? 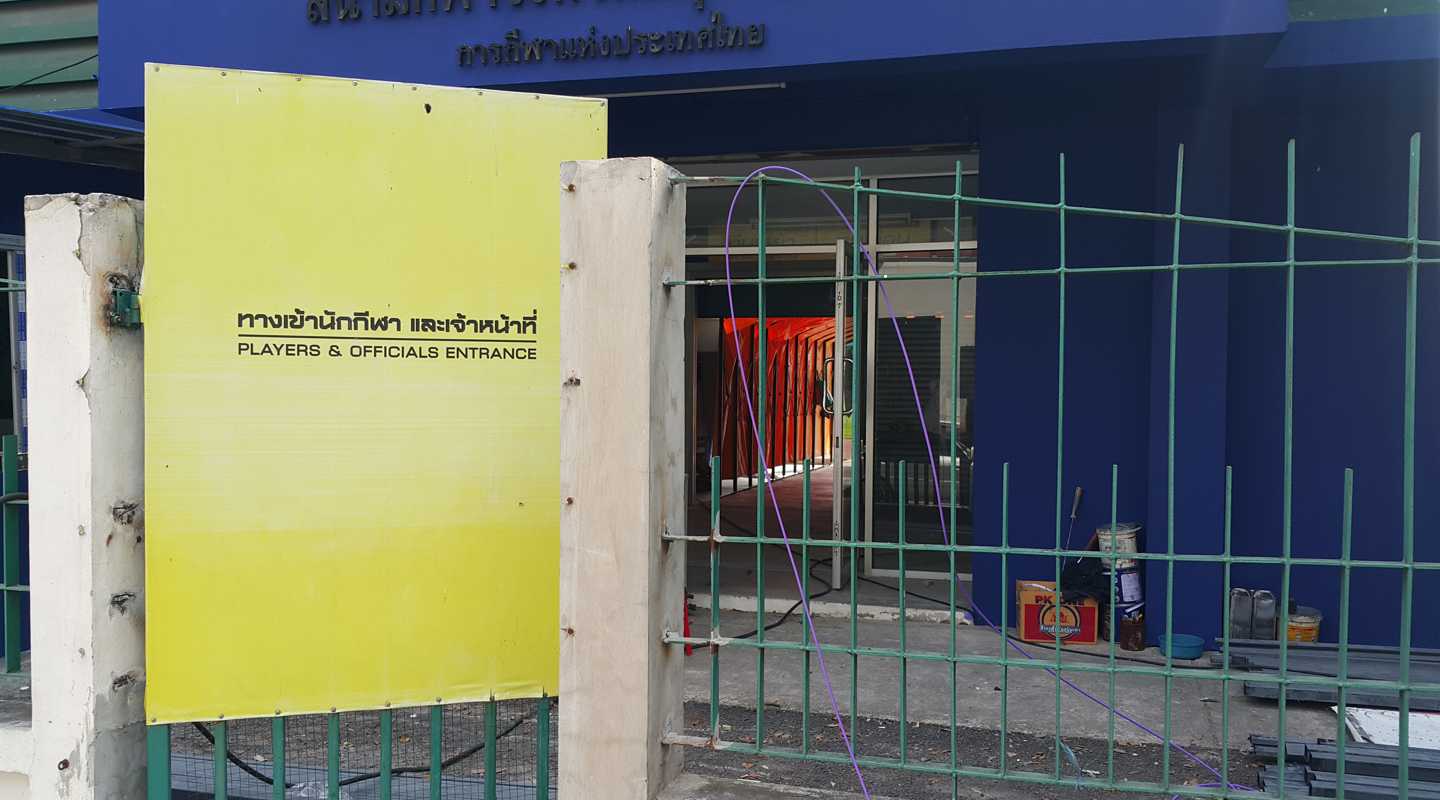 I’m not sure what I was expecting once I arrived at the stadium. In a perfect world, perhaps a new and gleaming well-stocked club shop with pennants, key-rings, cuddly teddies and replica shirts in all shapes and sizes. Perhaps a computerized ticket office where an attractive young lady would furnish me with details of season ticket prices and produce a stadium seating plan for me to pore over.

What greeted me resembled a building site.

Of course, football stadiums never look their best on non-match days. They tend to be grey, deserted and forlorn places and you feel as if you are trespassing. I remember going to look at the mighty Camp Nou stadium in Barcelona a few years ago and being astonished at how tatty it looked – both inside and outside. But this was on a whole new level. We’re supposed to be hosting Chiang Mai United in just over a week!

Wishing I had brought a protective hard hat, I picked my way around steel girders, dangling wires and sheets of gypsum board, all the while nodding at various electricians and handymen but really looking for a friendly face in an SPCFC polo shirt who looked like he knew the first thing about football.

With so much building activity going on, both ends of the stadium were open with no gates or fences to prevent you from just strolling in. And that’s exactly what I did now – with a grubby white soi dog following close behind. We both stood at the side of the pitch, taking in our surroundings. I looked down at the dog. The dog looked up at me. I said "what do you think of it so far?" - and the dog answered by immediately wandering off.

I decided to try my luck at the other end of the stadium where there seemed to be a bit more activity. I spotted a young guy in sports gear leaning up against the side of a van. Perhaps he was the midfield playmaker who pulled all the strings? The one who plays in the hole just behind the centre-forward, the one who plays off the shoulder and runs the channels? I’ll have a word with him when he puts his fag out.

I leaned on the advertisement hoardings at pitch-side, rather in that way you do at sparsely populated non-league grounds. Twenty foot away, there was a group of a dozen men going through some sort of training drill as well as smoking cigarettes and with shirts hoisted, displaying their ample bellies. If these were part of the squad then surely relegation beckons.

A pale, sweaty farang in these parts must be something of a rare sight and it wasn’t long before one of them ambled over to shake my hand and say hello. It turned out that they were part of the stadium fire and safety team and I breathed a sigh of relief.

I inquired as to the whereabouts of a ticket office or a club shop. Frankly speaking, I felt daft for even asking. My new friend pointed across the road to the nearest 7-11 and it was clear something had gone drastically wrong in the translation. I rephrased the question and this time he understood.

“Not finished yet” he replied. I’m not sure whether that meant the stadium, the ticket office, the club shop or the seating areas - but I suspect he meant all of it.

The pitch looked nice though. 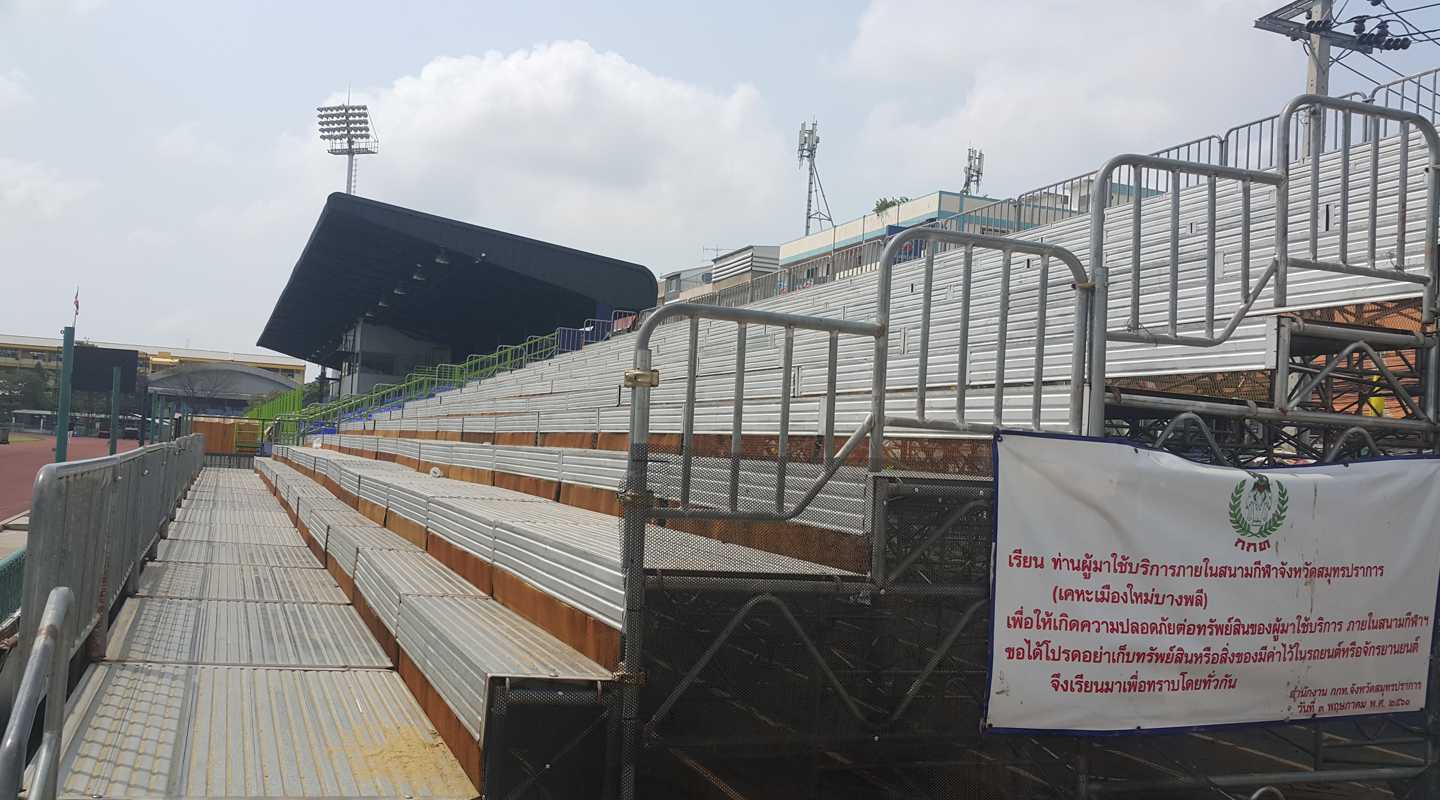 The stadium is located in Bang Plee, on the outskirts of the busy Bang Plee industrial estate. It’s a grim, dusty and very working class neighborhood. It reminded me of away days in England at long-forgotten grounds such as Filbert Street, Leicester or Ayresome Park, Middlesborough, where you park the car, make your way gingerly through menacing back-alleys and identical rows of terraced houses and then at the end of the game, just hope you’ve got a car to go back to.

To complete today’s research mission, I felt it only right to have a walk up and down the main street that runs parallel to the ground. What delights would it offer those fans coming for the matchday experience? Well, it had everything a working-class neighborhood needs – a gold shop, numerous cheap furniture stores, a Big C express and lots of shops selling tins of paint. For the football fan looking to kill time before a game, there were a couple of open-air coffee shops and the grimmest looking branch of Pizza Company I’ve ever clapped eyes on.

I wouldn’t get there too early if I were you.

The main worry is that I have to convince my wife that this is the place where we should be spending a fair chunk of our weekends. Wish me luck with that. 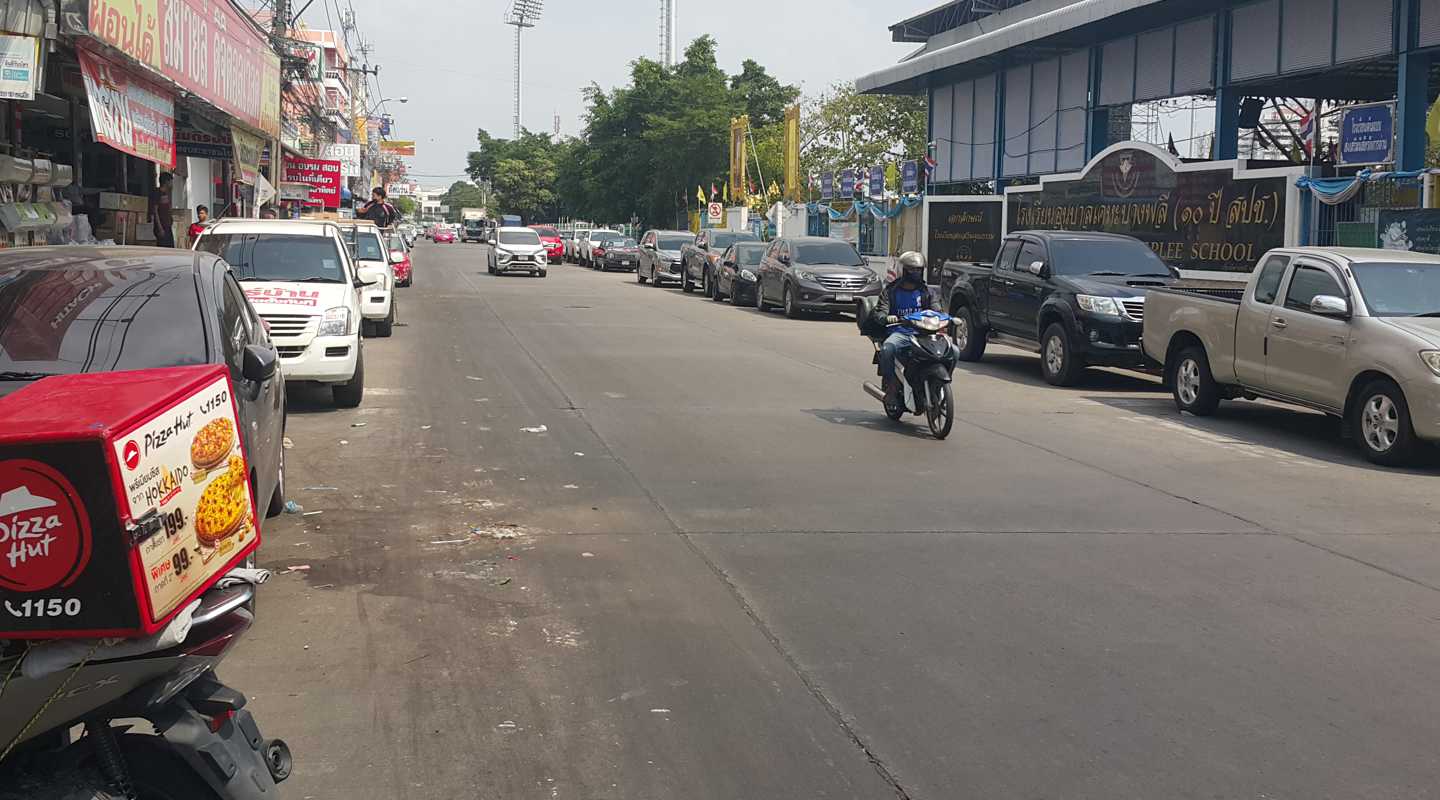 That said, perhaps Samut Prakarn City’s shortcomings are going to be one of the attractions of being a supporter. We are the poor relations, the team everybody hates, the Millwall FC of the Thai Premier League. No one likes us, we don’t care.

The club has ambitious plans to build a 32,000 capacity stadium to rival Buriram United’s Chang Arena but for now, things are what they are. The SPCFC Stadium in Bang Plee is our home, and fingers crossed when the team take to the field for the first home game against Chiang Mai on February 23rd, it’ll be alright on the night.

"Any advice on getting to the ground? Am I better off getting a bus to Bangkok and a taxi out? Or can you suggest anything else?"

Hi Jim. It's certainly a ground in the middle of nowhere and I haven't done any research on how to get there by bus or songthaew or minivan, etc. So for now I'm having to rely on taxis I'm afraid. I'll update the blog if I find out some cheaper ways to get there.

Thanks for the interesting article. I used to watch Pattaya United for the last few years and fancy watching the 'new' team (a bit like Wimbledon FC and MK Dons 😂!!).
Any advice on getting to the ground? Am I better off getting a bus to Bangkok and a taxi out? Or can you suggest anything else?
Thanks for any help.