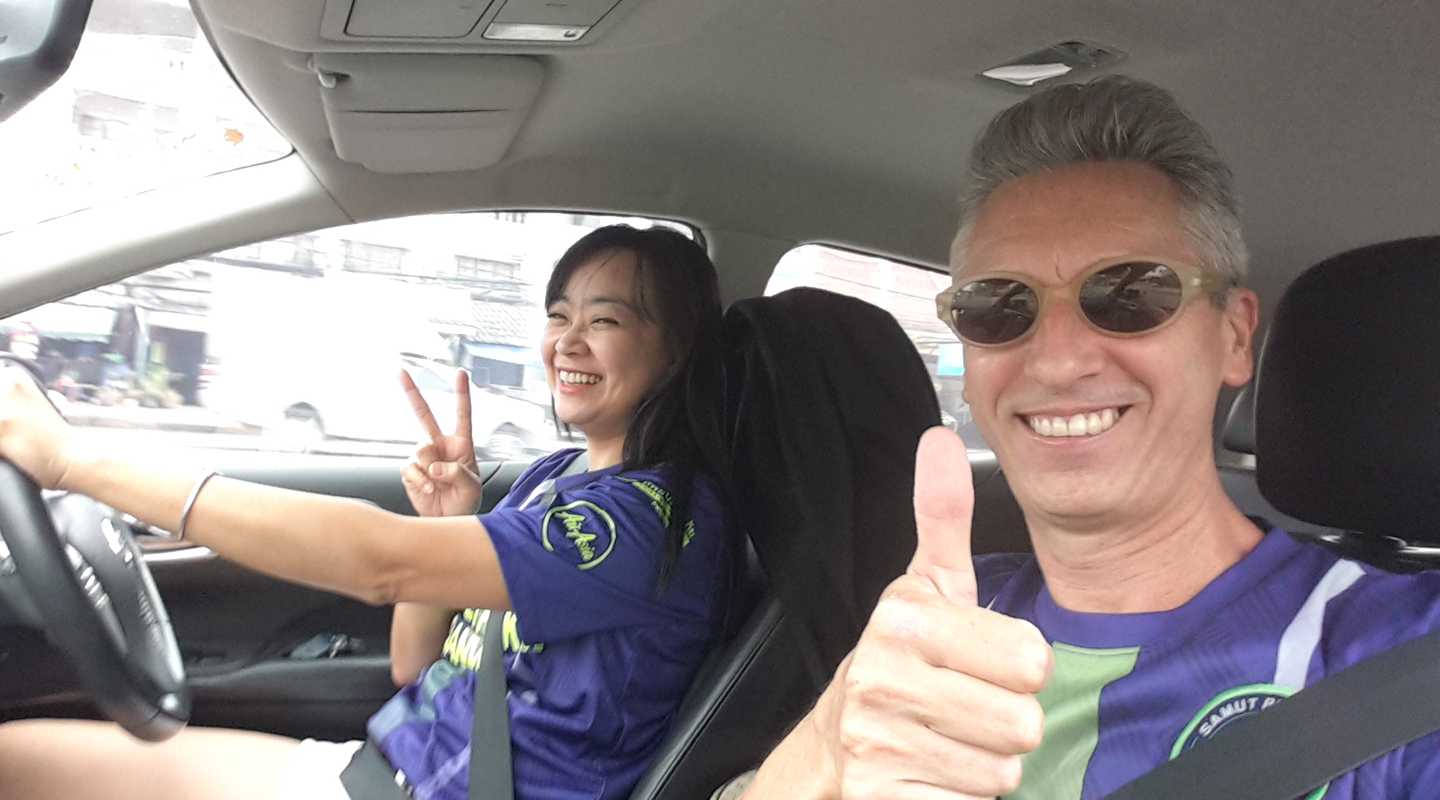 So back to Saturday night league action at Bang Plee?

Yes indeed, and this evening we welcome Prachuap FC (The Killer Wasps) from the delightful city of Prachuap Khiri Khan.

I've been to Prachuap Khiri Khan. I remember writing about it a number of years ago and describing the city as 'one of Thailand's best kept secrets'.  It's about a 75-minute drive south of Hua Hin but I decided to take my parents down there on what was advertised as an 'express' train. A relaxing, gentle journey on a beautiful, old Thai train I thought.   It took us almost four frigging hours.

But anyway, back to its football team.

Prachuap have only been in existence for 8 years and this is just their second season in the top tier.

In 2018 - their first Premier League campaign - they were widely tipped to struggle but surprised many experts by finishing a very respectable 6th, largely thanks to the strike partnership of Jonathon Reis from Brazil, who scored 26 goals, and Frenchman, Lonsana Doumboya, who chipped in with 13.  Both players have since moved on - Jonathon to Suphanburi and Lonsana to Trat.

Could this year be the dreaded second season syndrome? Well, so far not a bit of it and Prachuap are sitting very nicely in 5th place.

Their away form has been poor this season though. In recent weeks, they've had a couple of good hidings, losing 5-0 at Port and 6-1 at Bangkok United.

We have to fancy our chances tonight with our current home record standing at played 4, won 3, drawn 1. 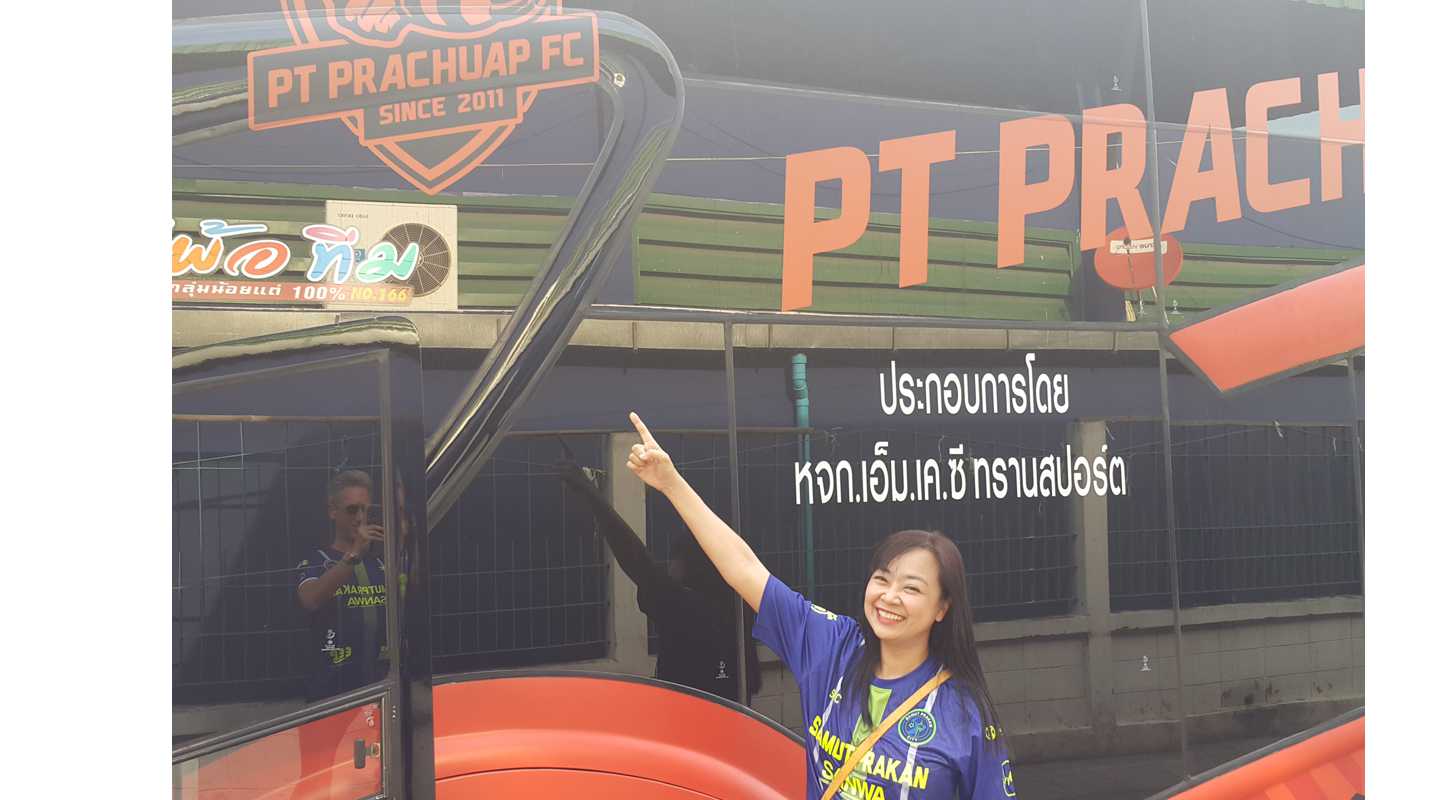 And the chance to go second in the table?

Yes, with Buriram not playing this weekend and Chiang Rai not playing until tomorrow, we have the chance to leapfrog both clubs and go second behind Port FC - at least for 24 hours!

Time to ask a friend on social media.  Alan Victor is a retired Cornishman now living happily in Prachuap.  Alan regularly goes to watch Thai League action when he's not relaxing at home, listening to his favourite 60's and 70's music. Here are Alan's picks.

Team captain, Adun Muensamaan, is a real veteran of the Thai League. Now 37, the man from Satun has notched up well over 200 appearances for several Thai clubs in a career that spans 14 years.

Adnan Orahovac is a Montenegrin defender now in his second season at the club. He once scored a goal in the semi-final of The Uzbekhistan Cup, which thankfully doesn't come up that often in pub quizzes.

You're nobody in the Thai Premier without a Brazilian, and Matheus Alves is one of two players bringing a bit of samba magic to The Prachuap Khiri Khan Provincial Stadium. Alves has hit the net four times this season but his Brazilian team-mate, simply known as Caion, has gone one better with five.  According to Wikipedia, the 28-year-old from Caxias has played for a staggering 21 clubs in 11 years.   "What squad number do you want on your shirt, Caion?" "Oh don't worry about that, I'm not stopping"

Yes, this will be her first home game since the goalless draw against Sukhothai in mid-March.  But don't worry - I've drawn a map to remind her how to get there!  She's also got a replica shirt folded away in a drawer somewhere - that's if the moths haven't eaten it.

With unusually light traffic (even for a Saturday) we covered the distance from home to stadium in no time at all.  We parked up at a shopping mall and killed some time in an untidy Amazon coffee shop, and then walked the ten minutes to the ground from there.

It was good to see some familiar faces outside the stadium. Mark the German groundhopper was standing in a shady corner and supping a pint of beer. I also bumped into my pals Richard and Jimmy. Jimmy hadn't been since the very first home game of the season against Chiang Mai and was impressed at how much things had improved regarding the handling of match day ticket sales.

On the topic of ticket sales, the official attendance was announced during the second half as just 2,050. That's really poor. The club should be getting far more supporters through the turnstiles than that, especially when you consider how well the team is doing on the pitch. 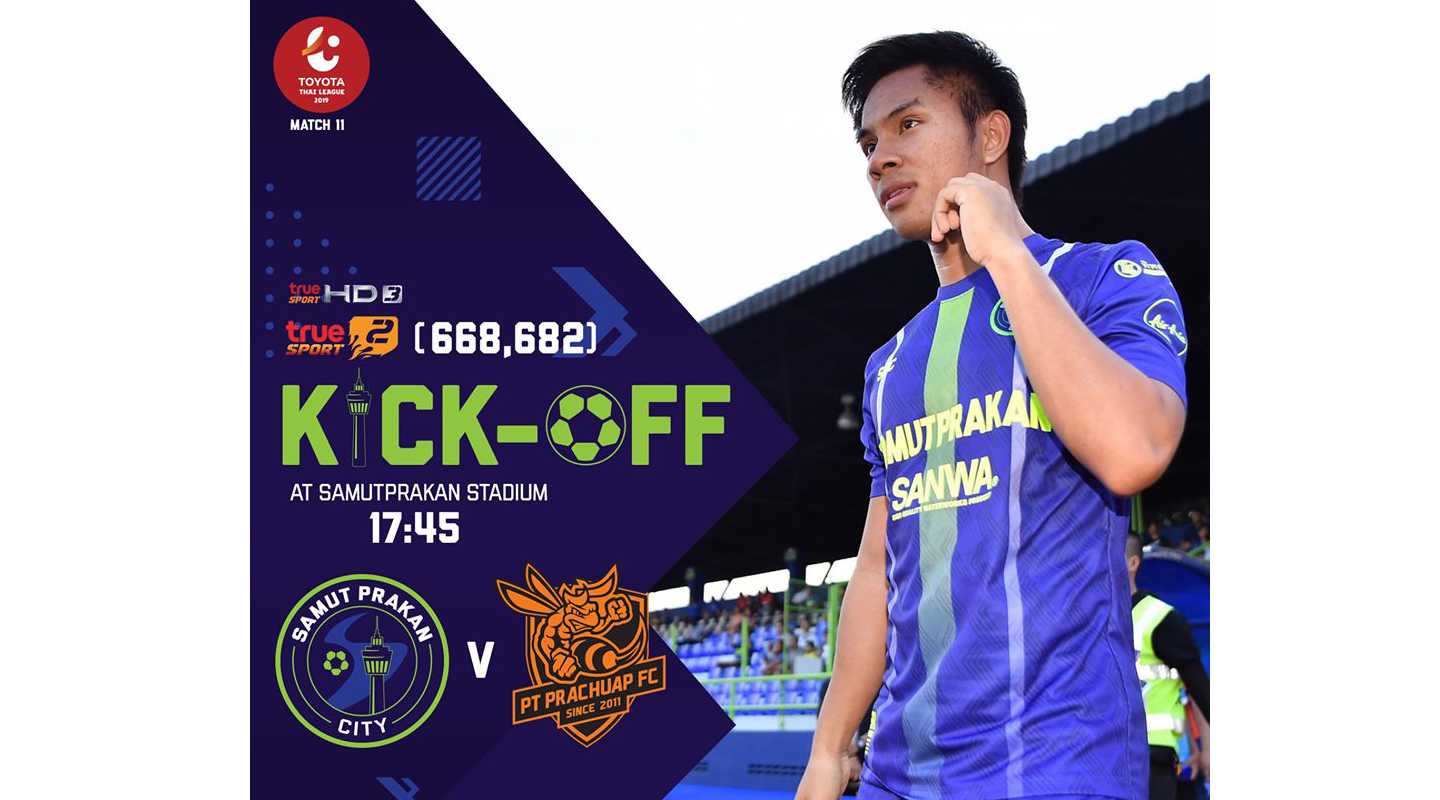 But another goalless first half?

It never got going at all.

I'm not keen on these 5.45 pm kick offs where most of the first period is played in fading daylight and seems to suck all of the atmosphere out of the occasion.

Carlos Carlao was surprisingly recalled to the starting line-up (given his recent fitness issues) but he looked off the pace all evening to me.  Carlos and Ibson Melo as a strike partnership are always going to be a handful - but only if the midfield can provide them with some decent service, and they didn't.  Passes found their way to Prachuap defenders and simple crosses were over hit.

It was a frustrating first half hour as a well organised Prachuap defence looked to just contain and hit Samut Prakan on the counter attack.

The best chance of the half fell to Caion in the Prachuap number 10 shirt, but the Brazilian fluffed his lines. Picking up a left-wing cross in the box, the ball somehow got tangled under his feet, allowing Sarawut to nip in and clear the danger.  Minutes later, Matheus Alves forced a fingertip save from Pathiwat in the Samut Prakan goal.

The home side continued to be limited to long range, wayward efforts, drawing moans and groans from an increasingly impatient home crowd.

Not a great first half. 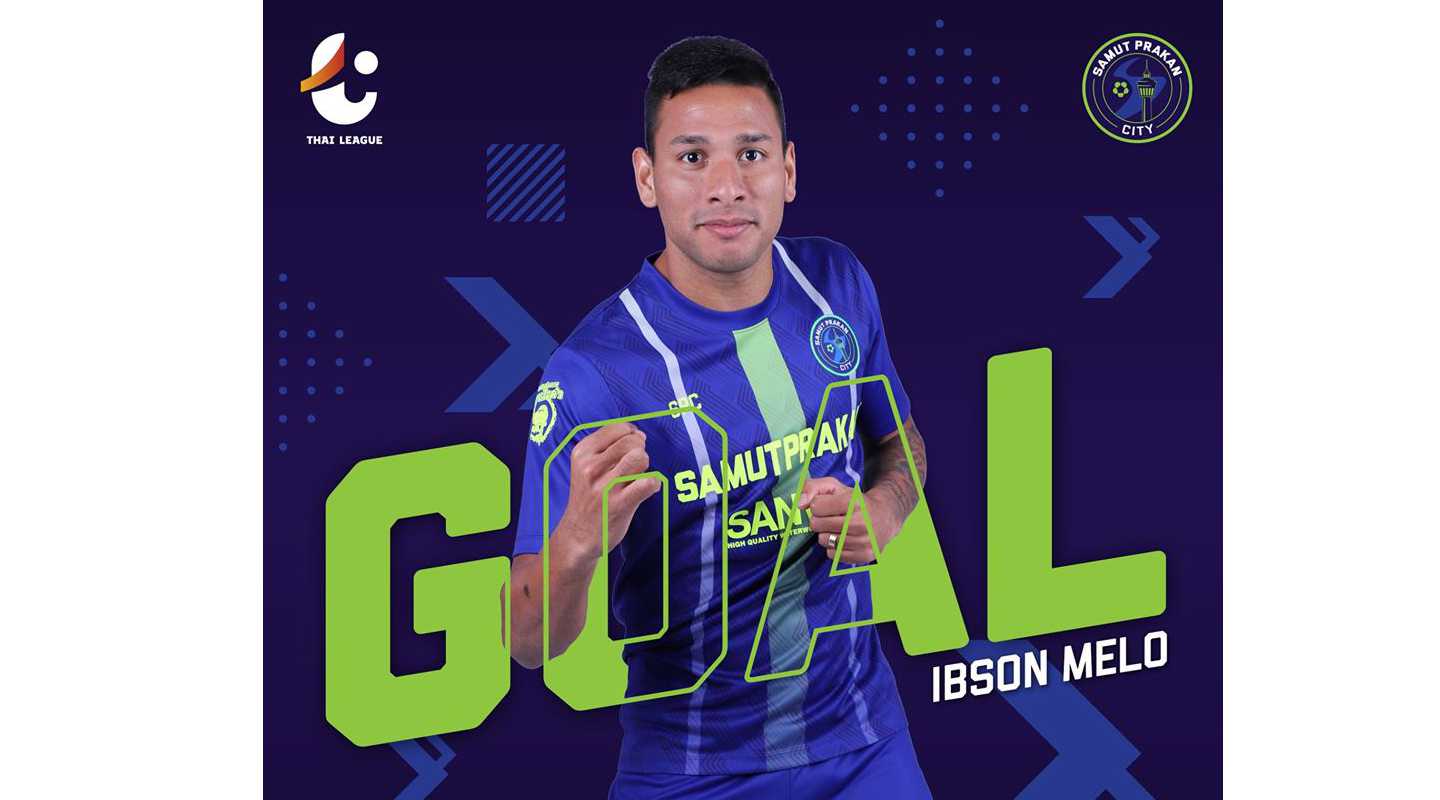 But step forward the main man?

Ibson Melo especially, started the half like a man on a mission, going on one of his jinking runs from midfield before being cynically brought down from behind by the Prachuap number 11.  The home players surround the referee demanding a red card but after long deliberation, he decides on a yellow. Jakkapan hits the resulting free kick tamely at the defensive wall and we still await the opening goal.

It comes in the 56th minute. Jaroensak has two chances to shoot from the edge of the penalty area, his first attempt is blocked by a defender, the second is parried away by the keeper but only into the path of Ibson Melo who slots home his 6th goal of the season.

The goal should have been the springboard to put the game to bed against an uninspiring Prachuap side.  Centre-half, Aris Zarifovic, had a glorious chance to double the home side's lead but put his header wide.

And from that moment on, Samut Prakan seemed content to sit back and protect what they had - but protecting a solitary goal advantage is always a risky strategy.

The stadium clock shows that 90 minutes are up, but Prachuap are awarded a free kick, their last chance to grab something from the game.

It's a fairly long way out but Matheus Alves realizing it's now or never, takes a long run up and strikes the ball true. It seems to go through not one, but two banks of defenders, who all then look accusingly at each other as the ball nestles in the bottom corner of the net.

Prachuap have equalized and grabbed a point right at the death. Oh football can be a cruel game. 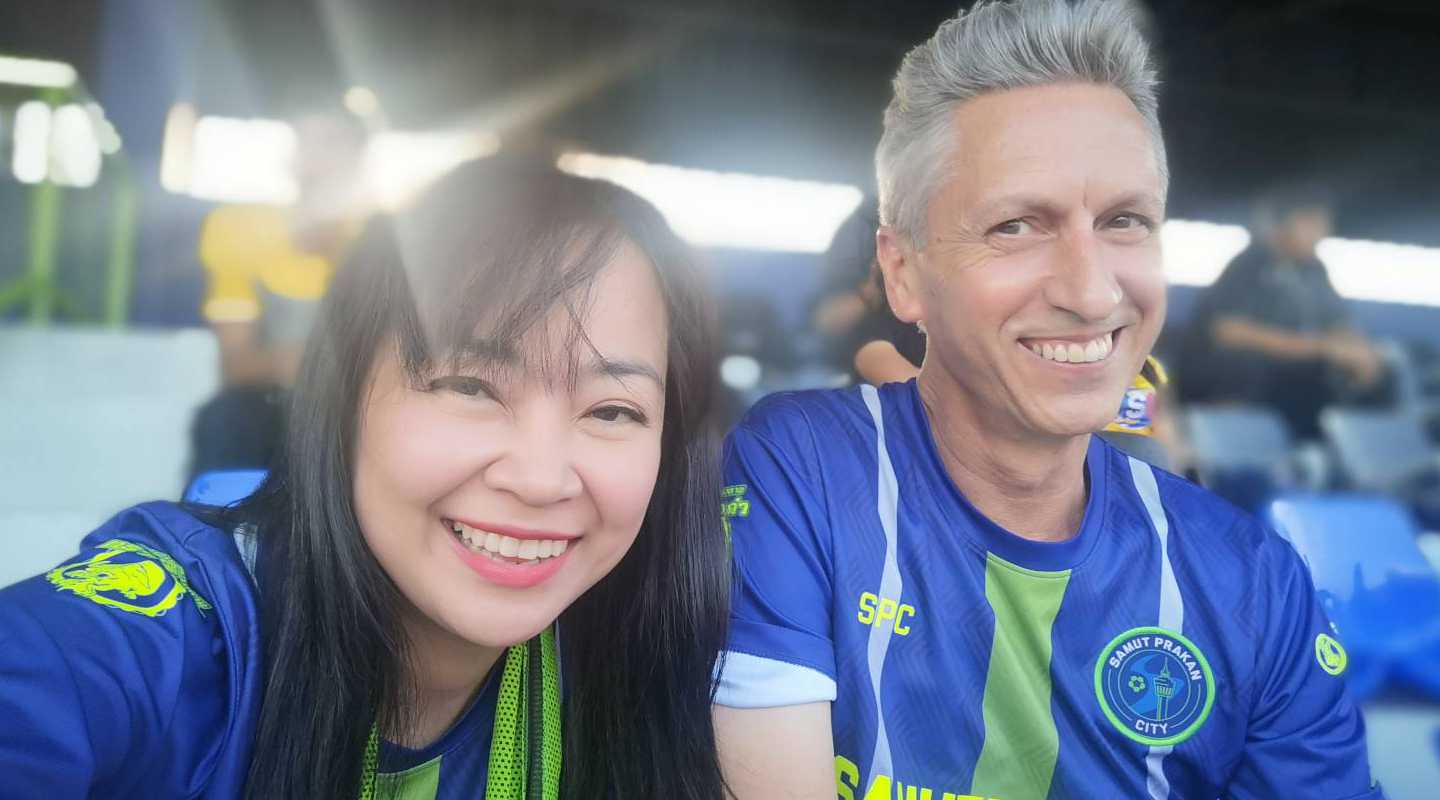 At the final whistle, Ibson Melo threw down his water bottle in anger. I know just how he felt. This was definitely two points dropped.

We had a great opportunity to make ground on the three teams above us in the table and we flunked it.  Prachuap are poor away from home and they were certainly nothing special tonight but we need to look at ourselves and say that too many players were below par.

On the way home, I check the football scores. League leaders, Port FC, have dropped two points at home in a 1-1 draw with Bangkok United (admittedly a tough game). And that seems to make tonight's result at Samut Prakan even harder to take.

A very difficult away trip to Bangkok United next Sunday (26th May). Truthfully, I'm not expecting anything less than a defeat. But let's see.