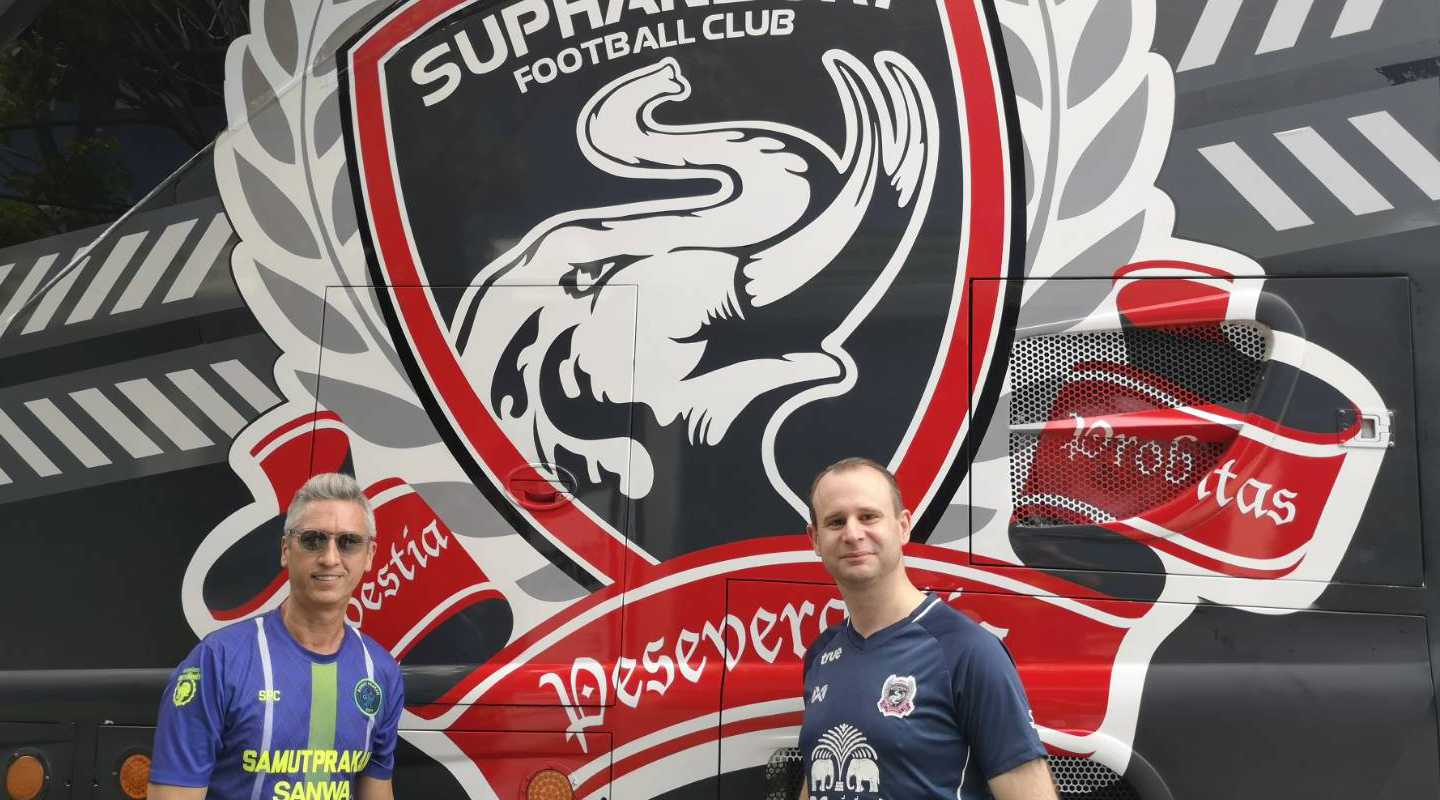 So here we go then, the final home match of the season?

Yes, the 15th home league game of a season that started back in February and this evening we welcome Suphanburi, who are lying just one point above the relegation zone. It's a must-win game for Suphanburi and the 'War Elephant' will be battling for all three points tonight.

It would be a shame to see Suphanburi drop out of the premier league?

Yes, certainly from my point of view. They are not every neutral's favourite team but I would like to see them survive. It's a relatively easy away trip from Samut Prakan and it's the chance for a nice day out with my Thai pal, Benz, who is a Suphanburi fan. So actually, there's a part of me that wouldn't be too disappointed if the visitors won tonight.

Despite their lowly position, Suphanburi's form hasn't been too bad of late?

They've done OK in the second half of the season. In the last 13 games, they've won 5 and lost just 3 but it's those five drawn games that could prove costly. If they could've converted just one of those draws into a win, they'd have a much better chance of beating the drop. They've also struggled to score goals and in that run of 13 games only hit the net 12 times. Less than a goal a game.

Buriram v Port FC is the big one of course. That match will have a significant bearing on who becomes champions at the end of the season.  At the foot of the table, Chainat at home to Nakhon Ratchisima is a real relegation six-pointer. Almost every game in fact, has a little extra added spice in terms of who finishes in the top three and who goes down to the championship.

Every match this evening will kick off at 6.00 pm so it means checking scores on mobile phones will become as crucial as watching the game you're at. It's going to be a nail-biter. 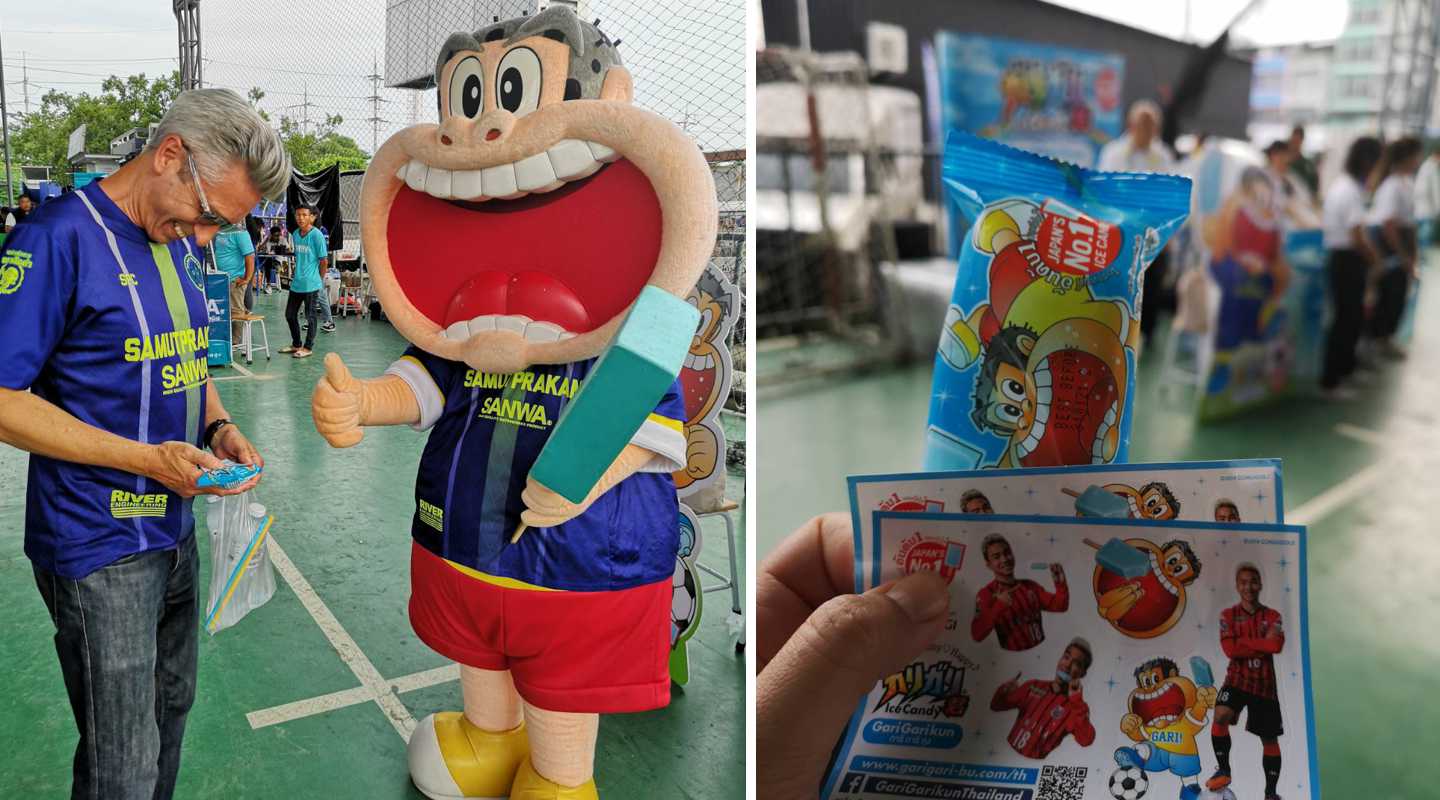 OK then, a bit of pre-match build-up?

A Japanese ice-cream company had set up stall in the Samut Prakan fan zone and were giving away free ice lollies. It's fair to say this was generating more of a buzz than the forthcoming football match.

I also got a brief chance to meet with Chris, a Suphanburi supporter from the south of England. That's Chris and I posing in front of the Suphanburi team bus at the top of the page.

Chris and I had touched base several times on social media and on this visit to Thailand, he was determined to take in his first ever Thai football match. Considering Chris was still in the UK 24 hours earlier, to take a long-haul flight, drop his bags at the hotel and then immediately make his way to the Samut Prakan Stadium (not the easiest place to find) was a terrific effort. He looked remarkably chipper despite the jetlag.

Good to meet you Chris and I bet you had a fantastic evening!

That sounds ominous. To the game itself and the first half?

Samut Prakan started reasonably well and were rewarded with the opening goal on 13 minutes. Teerapol Yoyei picks out Ibson Melo on a forward run and Ibson does what Ibson has been doing all season - keeping his head and calmly scooping it over the advancing goalkeeper.

Just a couple of minutes later, tragedy strikes as star man, Jaroensak Wonggorn, is seriously hurt in a tackle and that's the end of his evening.  The young man looks clearly distraught as he's wheel-chaired to a waiting ambulance. We wish the wing wizard a speedy recovery.

Suphanburi start to feel their way into the game and the 24th minute equaliser comes as little surprise. Goalkeeper Kampon is adjudged to have brought down a Suphanburi attacker (perhaps a tad harsh) and Brazilian journeyman, Cleiton Silva, makes no mistake from the spot. Suphanburi are back on level terms!

The rest of the first period is a stop-start, bitty affair with lengthy stoppages and hold-ups for injuries. It's not been a great game of football by any stretch.

The crowd have barely had time to take their seats when Samut Prakan concede a second goal, this time from a corner kick. Veteran defender Tinnakorn's innocuous back-heel at the near post somehow finds its way through a crowded penalty box and trickles agonizingly into the corner of the net. It's 2-1 to the visitors!

You can't really see where a Samut Prakan equalizer is coming from but it does come care of Teerapon Yoyei on the hour mark. Chayawat's shot is well saved by the Suphanburi keeper but only pushed into the path of Yoyei who slots home to make it two-all on the night.

A draw was not enough for Suphanburi, they had to go for all three points. As the fourth official signals three minutes of injury time, it's now or never. Step forward winger, Kasidech Wettayawong, to hit the goal of his life with a precision chip from just outside the box that arcs over the Samut Prakan keeper and sparks mass celebrations on the touchline. Suphanburi have done it! (match highlights) 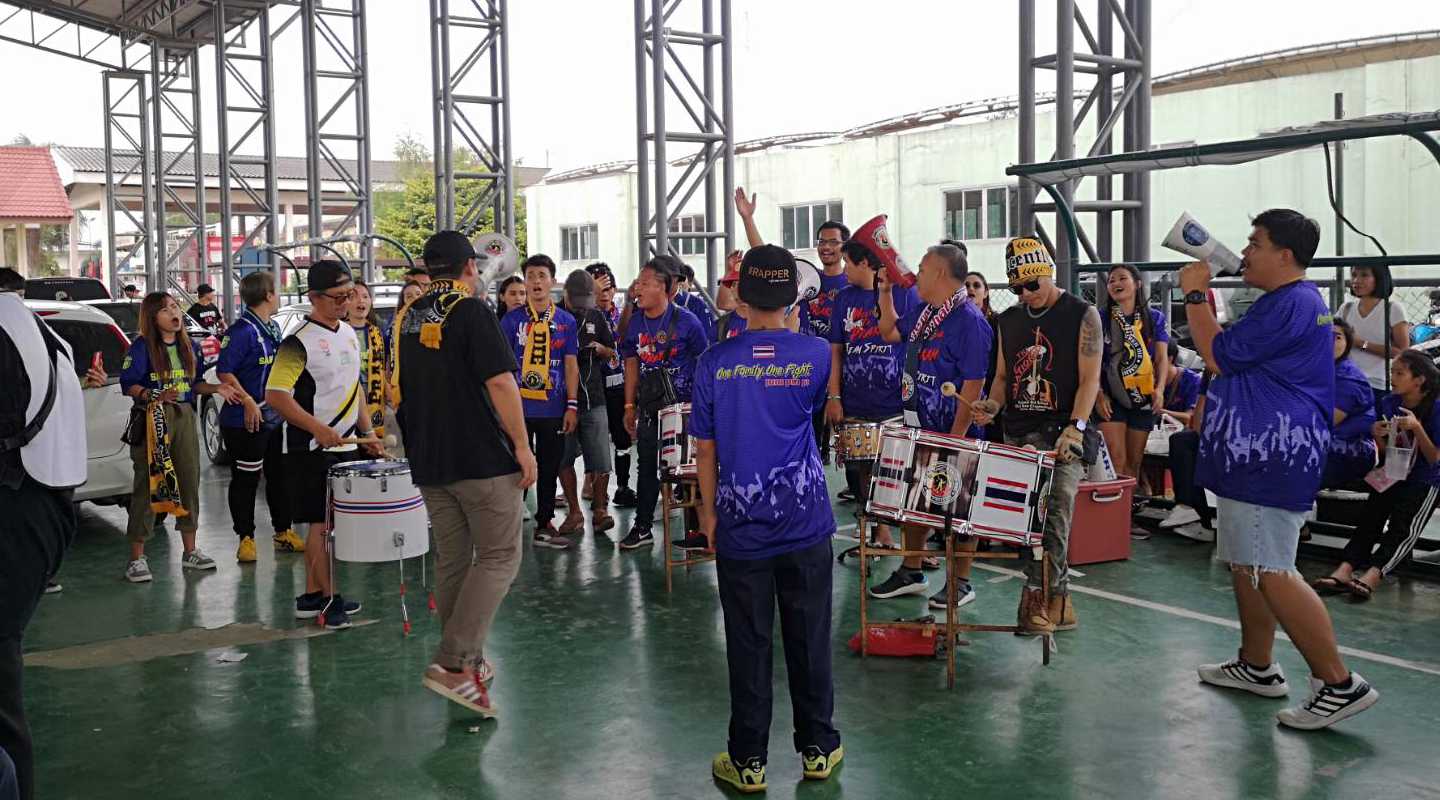 First of all, congratulations to Suphanburi on a gutsy performance and a fine win. It was thoroughly deserved.

Those who have followed this blog and read my Thai football tweets will know how much I've enjoyed following Samut Prakan this season, but I found it really hard to summon up any enthusiasm for tonight's game. I think it was a combination of factors.

1) Samut Prakan had nothing to play for. Does it matter whether we finish 5th, 6th or 7th?

2) It was one of those unbearably humid and uncomfortable Bangkok evenings with little or no breeze.

3) It probably can't be avoided but taking a lengthy international break before the final two games of the domestic season just destroys the momentum and sucks the fun out of things.

4) Samut Prakan had run some sort of soccer school for very young Japanese kids in the week leading up to the game and I guess as part of the package, they got to attend the match with various parents and babysitters. When 50-60 of the little darlings entered the stadium ten minutes before kick off, firstly it took them an age to find their seats and then being young and Japanese, they lost interest in the football within the first 10 minutes and spent the rest of the game pissing about with battery-operated fans, bento boxes and any other distraction that came to hand. I felt like a teacher in the middle of a classroom full of rowdy pre-teens.

5) I had a cold and a sore throat coming on.

So what about tonight's results and how they affect the top and bottom of the table?

You can go to the current Thai league table here

In the match of the day (probably match of the season) Buriram beat Port FC 3-1 at a sold-out Thunder Castle so it's now Buriram's title to lose. Chiang Rai in second place could still pip them at the post but face a tricky final fixture away at Suphanburi and seriously, can you see Buriram losing or even drawing away at bottom club Chiang Mai (who are already relegated)?

At the bottom of the table, Chiang Mai and Chainat are both down.  The third relegation place will be filled by either Suphanburi, Sukhothai or Nakhon Ratchisima.  Nakhon Ratchisiam at home to Sukhothai on the final day will be quite a game.

And Samut Prakan's final game of the season will be away at Port FC?

Yes, and when the fixture list came out at the start of the season, it was the away game I was looking forward to most of all. It's a shame really that the fixture has a slightly nothing feel to it (things would be very different of course had Port won the game against Buriram)

On the 2nd November, Port FC will contest the FA Cup final against Ratchaburi, so they might even see the home game against Samut Prakan as the chance to rest a few of the regular starters and star players.

Anyway, let's see what unfolds. See you at the PAT Stadium in Klongtoey for the last hurrah! From a Samut Prakan point of view that is.