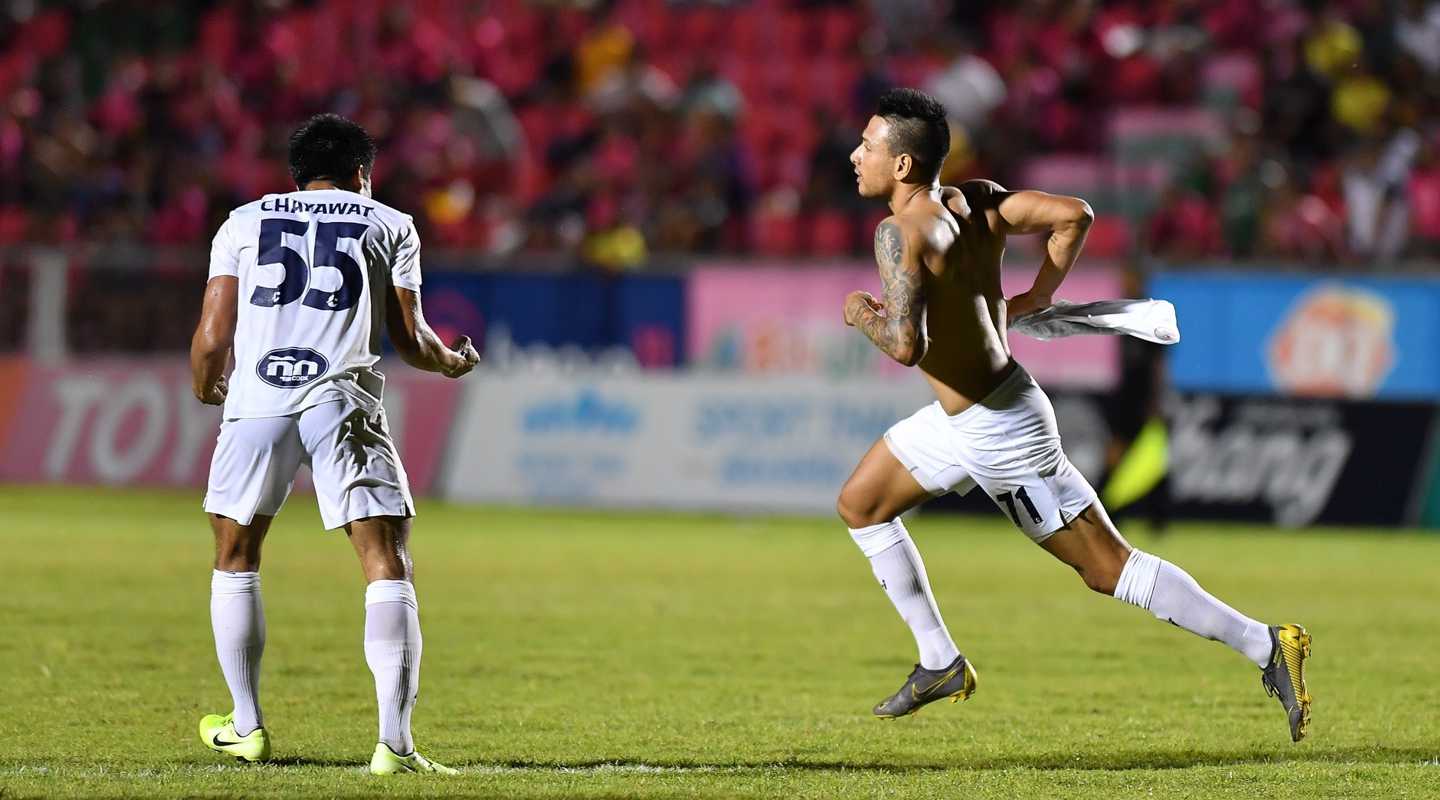 It's been a while. What's happened in the four league games since the last blog?

First up came a couple of away trips to Chainat and Prachuap, two teams struggling at the wrong end of the table.  One thing you can always guarantee though when you face teams in or near the relegation zone is that they're going to scrap for their lives and given Samut Prakan's poor run of form, these were always going to be difficult fixtures.

The game v Chainat turned out to be another Ibson Melo show as our Brazilian superstar grabbed a glorious last minute goal to give Samut Prakan a 3-2 victory. Captain Peeradol, returning from injury, looked like he'd rescued a point with an 85th minute penalty but there was Ibson (already voted man of the match) to net the deciding goal and earn Samut Prakan all three.  The evening might have belonged to Ibson but how wonderful to see Captain Peeradol back! It's no coincidence that we suffered such a poor run of results in his absence. (match highlights)

The following week, we traveled south to the coastal town of Prachuap. In their previous match, The Killer Wasps had beaten top four side, Bangkok United, 1-0 at home, to end a run of eight games without a victory. Could they get three points at home to Samut Prakan and take a huge stride towards safety and guarantee their fans premier league football for at least another year? They could indeed. Prachuap ran out 2-0 winners against a below par Samut Prakan in a match very low on quality and littered with niggly fouls and lengthy stoppages. Definitely a performance to forget from our point of view. (match highlights)

Then came a 3-week international break and I left for my annual trip to see family and friends in England. 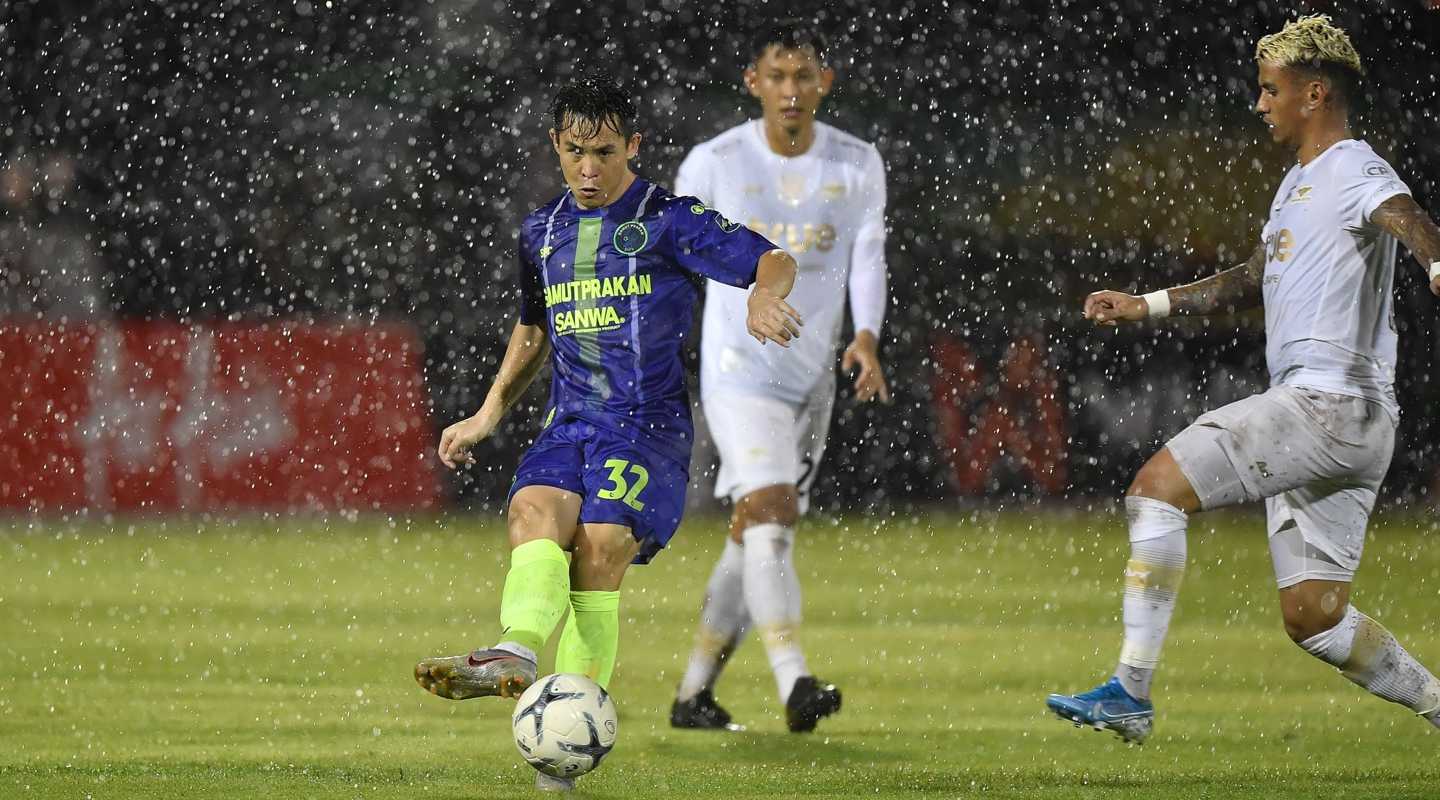 The domestic season resumed with Samut Prakan at home to Bangkok United on 14th September and a battle between two sides whose title hopes had long faded but were still in the top five.  I was still in England at the time and being unable to get a live stream of the match action, I had to make do with score updates from the club's official Facebook page.

With torrential rain all over Bangkok, the game was lucky to reach completion and it ended honours even in a 1-1 draw. Jareonsak's 60th minute equalizer earned Samut Prakan a point but saw us drop out of the top five for the first time this season. It was also our second lowest attendance of the campaign with just 1,495 braving the rainy season conditions. (match highlights)

Finally, we travelled to Khorat for a Sunday evening kick off against Nakhon Ratchisima, who were hovering just above the relegation zone but with a couple of games in hand on the teams below them. Nakhon Ratchisima had everything to play for and frankly battered us from start to finish. Incredibly, we went in goalless at half-time despite the home side missing a penalty, hitting the woodwork twice and forcing Samut Prakan's Kampon into several terrific saves.

When Ibson Melo opened the scoring on 64 minutes, it felt like we might be in for a classic 'smash and grab', but the lightning-fast Khorat forward line had other ideas and netted four times in the final twenty minutes or so.  Final score - Khorat 4 Samut Prakan 1 - and a disappointing, typically 'end of season' performance, where we got what we deserved - nothing. (match highlights) And the weather was terrible. Kudos to Samut Prakan's small but loyal band of followers who sang in the rain throughout. 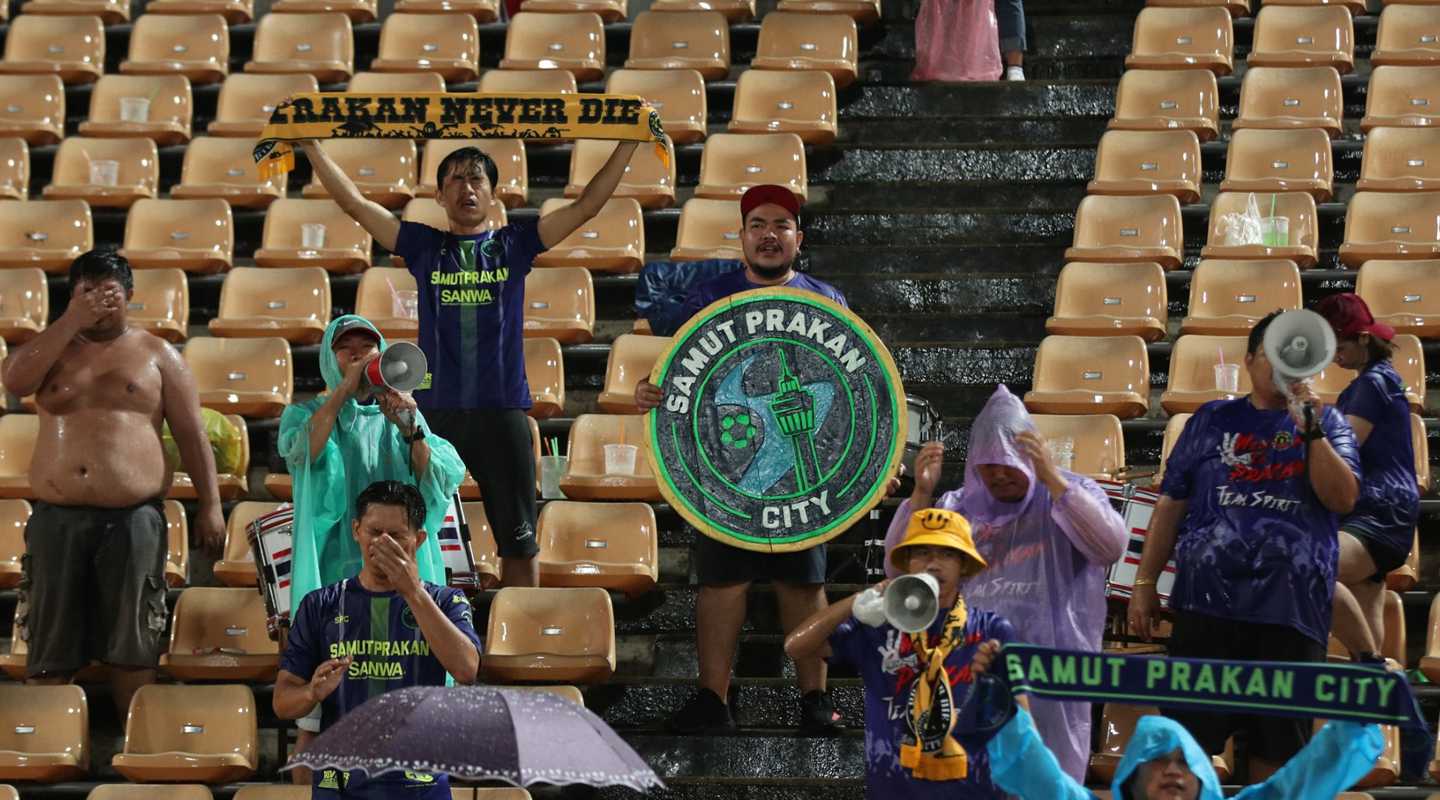 Three games to go then, starting with tonight's match at home to Muangthong? Confident?

Not at all. Although Muangthong had a dreadful start to the campaign and we beat them 3-0 at their place, they have rediscovered their form in the second half of the season and are currently on a run of just one defeat in their last 13 games (a 2-0 reverse at Port FC) This is going to be a very tough evening indeed.

Muangthong currently lie four points ahead of Samut Prakan in the premier league and still have a top three finish in their sights, which would be remarkable given they won only two of their first dozen games.

Who's banging in their goals?

Brazilian striker, Heberty, has got 13 goals for the season including 7 in the last 8 matches. However, he's probably just one of several danger men we need to watch out for.

Before we get on to tonight's game, how are things in the M150 Championship (the second tier) where hopefully three Bangkok-based teams might get promoted?

Selfish I know but that would be nice wouldn't it? Three relatively comfortable away trips to three new grounds?

Anyway, with just two games of the season left in that division, BG Pathum United have already been crowned champions (so that's one Bangkok team up) The other two promotion places are still anyone''s guess, with four teams still in the mix. Police Tero and Army United are both from Bangkok; the other two teams in the shake-up are Sisaket FC (which is in North-East Thailand and about an 8-hour drive away) and Rayong FC (about three hours south). No prizes for which of the promotion hopefuls I'm rooting for. 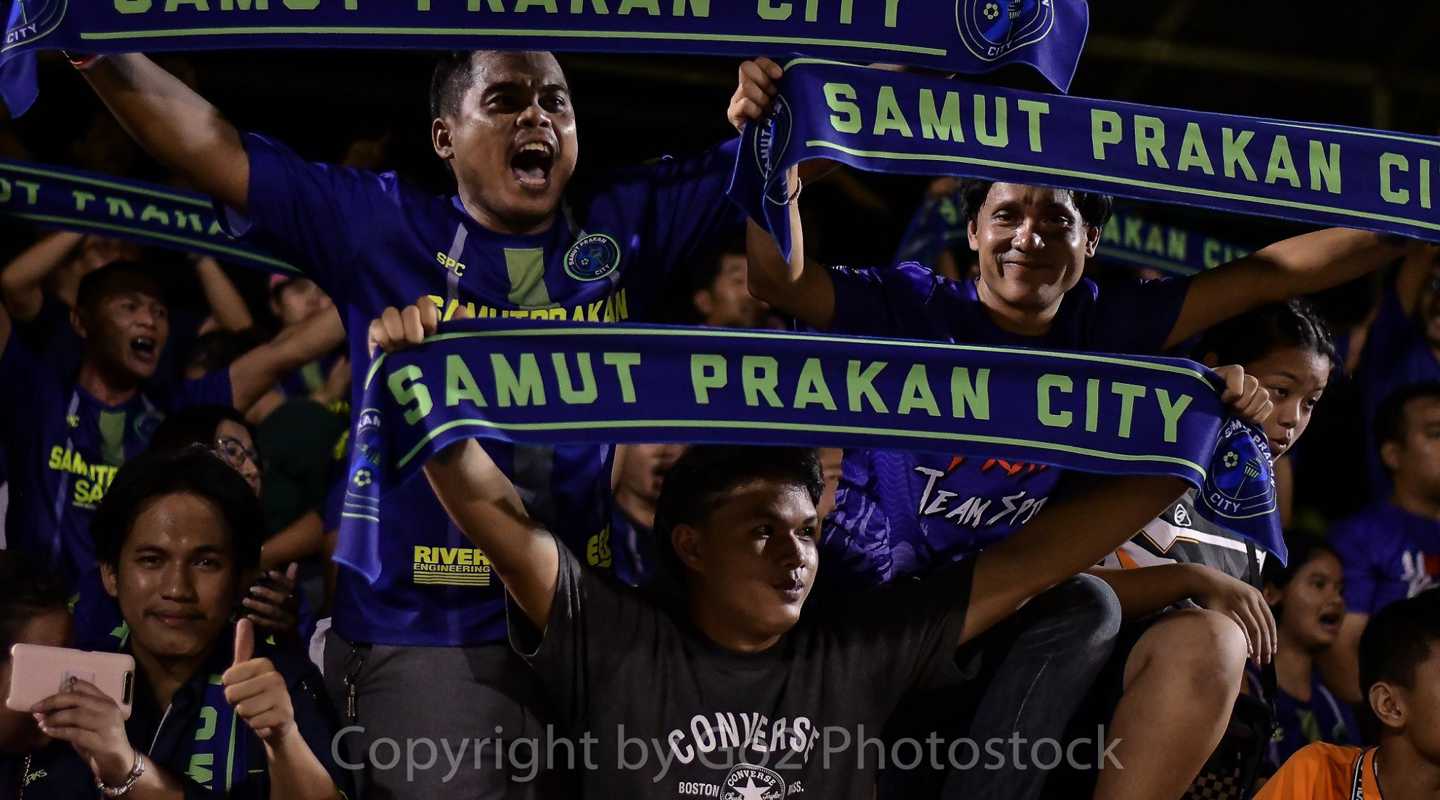 So let's get to tonight's game, was it a decent crowd?

I feared a poor turnout because we don't do well with midweek attendances but the crowd was announced in the second half as 3,600, swelled by some good travelling support.  It actually felt like more than three and a half K because I couldn't see too many empty seats. It was certainly a lively atmosphere. The home fans got behind the team and made a lot of noise tonight.

My heart sank a little when I saw the starting line-up. No Captain Peeradol,  Picha Autra not even on the sub's bench, and a defensive pairing of Arifovich and Kim Hoyeong against one of the best forward attacks in the league.

No surprise then when we went behind after just 8 minutes. Samut Prakan's Jaroensak, completely switches off in defence and allows Muangthong's Filipino international defender, Sato, to ghost in behind him and whip in a cross from the by-line. The unmarked Derley applies the finishing touch with a straightforward header. Shortly after that, Muangthong thump a shot against the woodwork. This could be a very long evening.

The Samut Prakan of recent weeks might have capitulated but somehow we started to feel our way back into the match with some commendable midfield possession and passing, without an awful lot to trouble the Muangthong defence. Then with five minutes of the half remaining, Boworn Tapla unleashes a venomous strike from outside the box and we're back on level terms. This is suddenly anyone's game. Half time - Samut Prakan 1 Muangthong 1.

Whatever the players drank at half-time, it had the desired effect as we turned back the clocks to the intensity of the first few months of the season. Samut Prakan played some great stuff and were rewarded with a second goal on 55 minutes. Jaroensak makes amends for his first half lapse of concentration and turns goal provider, whipping in a deep cross to Ibson Melo on the far post. The Brazilian adjusts his body shape and volleys across the goalkeeper and into the left-hand corner. Great technique. How many times this season has he proved to be our match winner.

There's still a long way to go until the final whistle but the home side look comfortable and more likely to add a third than Muangthong grabbing an equalizer.  That is until the final ten minutes when Muangthong are awarded a series of dangerous free-kicks from an over-fussy referee. Twice, goalkeeper Anurak comes to the rescue with a couple of outstanding tips over the crossbar;  another free kick sails wide of the post. We're hanging on for dear life but there goes the final whistle. Samut Prakan 2 Muangthong 1. (match highlights) 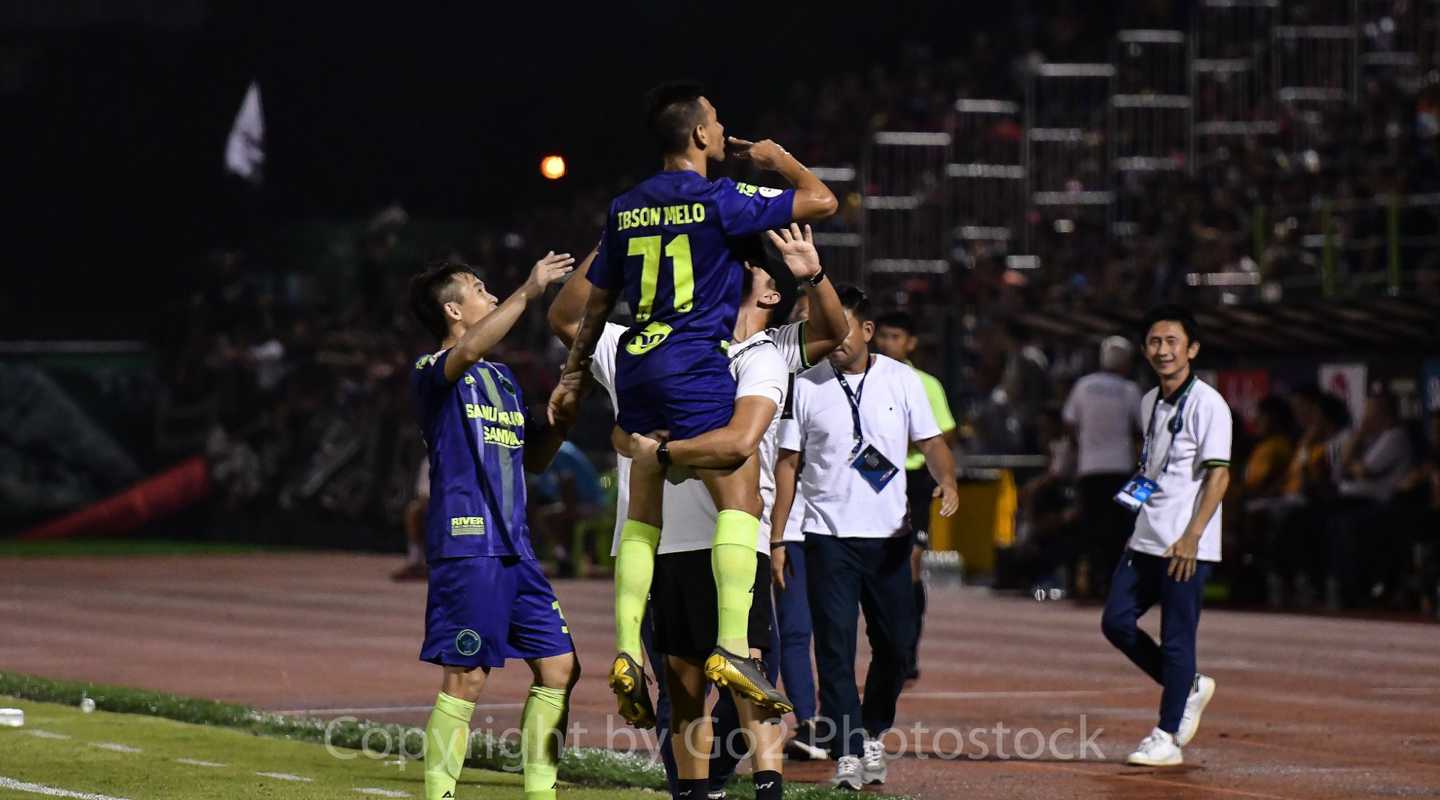 Oh man, where did that performance come from? This was like watching the Samut Prakan that beat almost every team put in front of them during the first half of the season. Every player put in a great shift tonight. Players who were out of touch like Jakkapan and Teerapol Yoeyei, rediscovered their form. Even Korean defender Kim Hoyeong - who I've been critical of - probably had his best game in a Samut Prakan shirt.

Let's not forget that tonight we went into the game on a poor run of results and we've ended up beating an in-form side that had lost just once in the last 13 outings. Full marks to Muangthong though for making it such an attacking and exciting game.

Yes, after another international break, we host relegation-fighting Suphanburi on Sunday 20th October, and then the following Saturday, we end our season with a short away trip to Port FC. They could both be intriguing encounters for very differing reasons. Suphanburi will need the points to ensure they remain in the top flight; and Port FC might well need a victory to be crowned champions? (we'll know more after their game against Buriram) but one thing is for sure, Samut Prakan have a golden opportunity to become end-of-season pantomime villains.