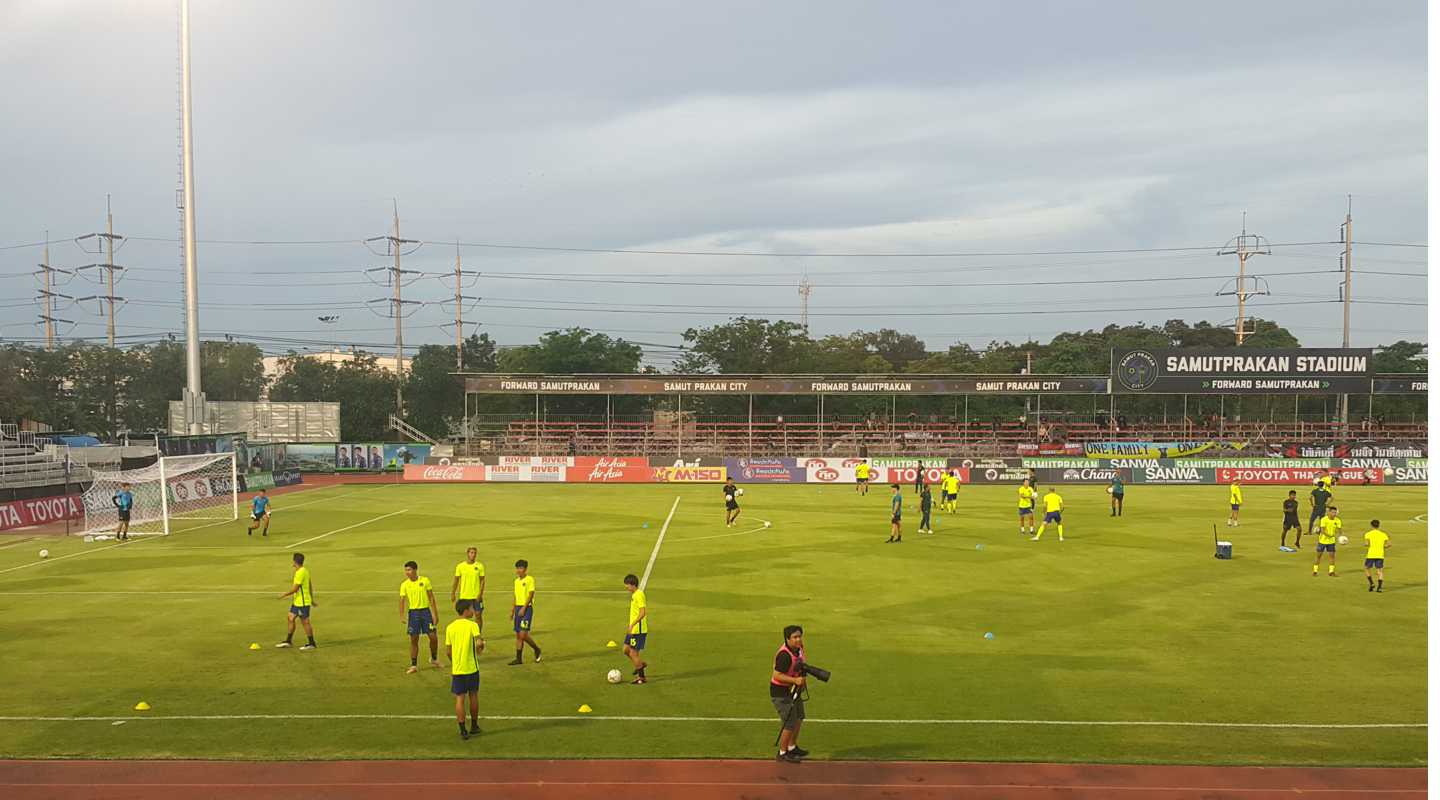 Right, who are welcoming to Bang Plee on this balmy Wednesday evening?

Tonight we are up against 'The Swatcats' or Nakhon Ratchisima Mazda FC, to give them their full name. However, many football fans refer to the club as simply 'Khorat', depending on which of the two names for the city you prefer to use.

We extend a warm welcome to any Khorat supporters who have made the four-hour journey from 'The Gateway to the North-East'.  Enjoy the game!

Have Khorat been around long?

They were formed in 1999 and after spending a number of seasons in the regional leagues and second tier, they were finally promoted to the Premier League in 2015.

This is Khorat's 5th season in the Thai Premier and it's looking like this could be their best ever finish, beating the 8th, 11th, 12th and 7th place finishes that they managed so far.

This is a club that definitely believes it belongs in the top four and equal to any other team in the Premier on their day.

They're a well supported club too?

They're pulling in some seriously impressive numbers.  This season they top the attendance table, attracting an average of over 15,000 fans to home matches at the 80th Birthday Stadium. Over 22,000 braved the rain on Saturday for the visit of table-topping Port FC

This is even more remarkable when you consider that during their days in the regional leagues, they were lucky to get over 400.

So how is their form on the road this season?

The Swatcats started the season with two away wins at Rayong and Ratchburi but since then they have lost three on the bounce, including perhaps a surprising 3-1 reverse at struggling Suphanburi.

I never read much into these current form stats though. I've said it before and I'll say it again - anyone can beat anyone in this competitive Thai Premier League.

One of my good friends on social media is young Russell, a friendly football fanatic who divides his loyalties between his adopted Khorat and his beloved Wolverhampton Wanderers. I can't think of a finer gentleman to mark our cards for tonight's game.

Russ begins by saying, "It's hard to pick out individuals as the Swatcats are a real team unit. Samut Prakan fans should look forward to seeing a workmanlike Swatcat team who will fight tenaciously"

But here are Russ's picks in terms of those players most likely to shine.

Midfield hard man, Kitsida Hemvipat, is the first on the list. "Watch out for his semi-legal tackling" says Russ. The 34-year-old Kitsada, seems to have found his niche at Khorat. Despite being around in the Thai League since 2011, previous spells at the likes of Chiang Rai and Khon Kaen resulted in only a handful of first team appearances.

Creative midfielder and goalscorer, Leandro Assumpcao, also gets Russ's nod of approval.  "Look out for his skillful flicks and darting runs into the box" A veteran of almost ten Thai League seasons, the Brazilian has generally scored goals at every Thai club he's played for, including 13 goals in just 16 appearances for Muangthong a few years back. This season, he's already hit the onion bag 8 times for The Swatcats.

"Our upfront duo, Henri and Amadou, have been a real hit in their first season with the Swatcats. Look out for Amadou’s dribbling and crossing and Henri’s ability to cut in from the flanks and hit accurate shots"

51-year-old Serbian, Miloš Joksić, has been in the hot seat at Khorat for four seasons. The big man (and my word, he's a big fella) has also managed Pattaya United, so in a way, he's up against his old club. 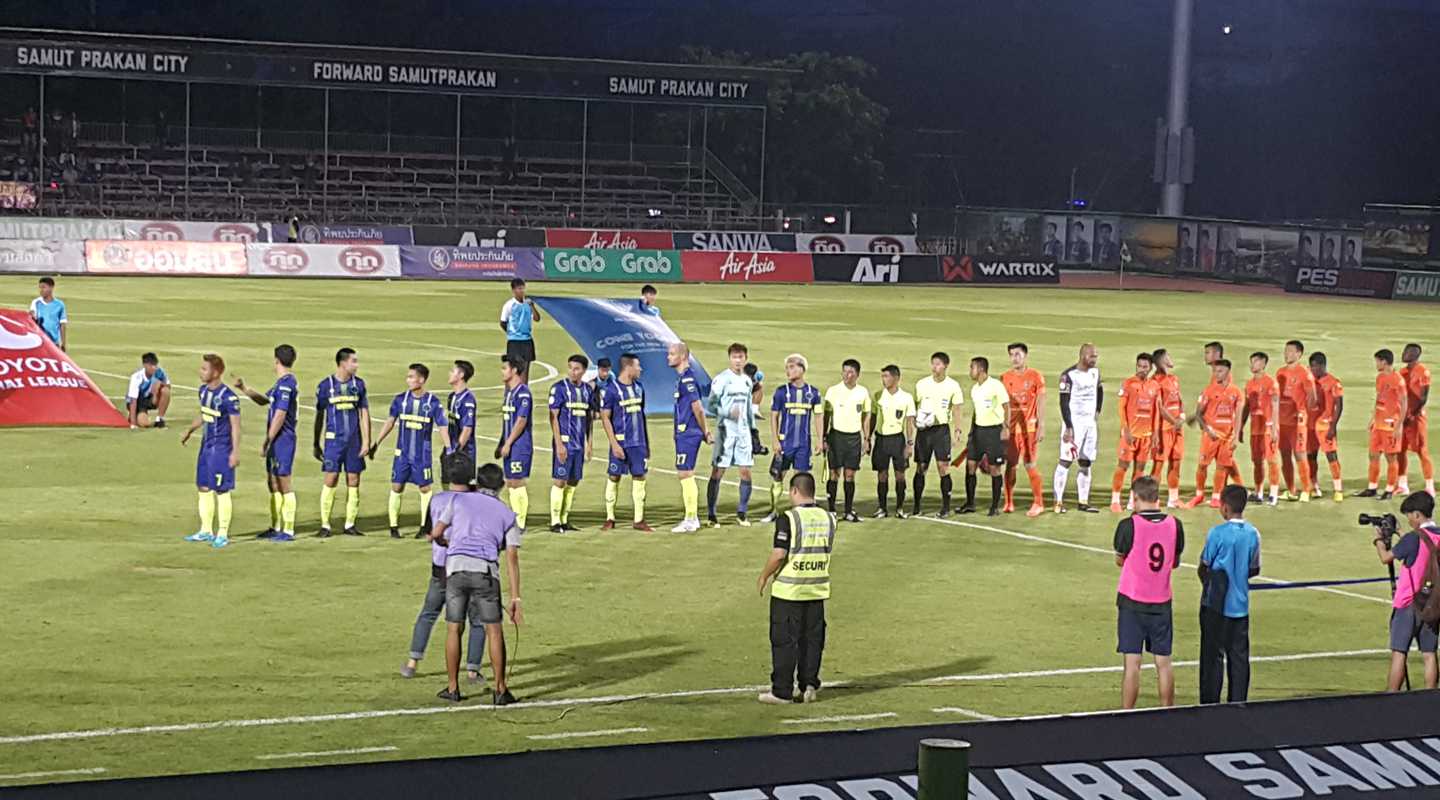 On your own for this one?

It's very difficult for working people to make these midweek kick offs when they don't knock off until 5.00 at the earliest and then have to battle heavy traffic. My wife can't make it tonight and neither can my two football pals, Richard and Jimmy. However, my Twitter mate Gian, a young, aspiring football journalist who covers all things South-east Asia, fancied taking in the game and he took advantage of my wife's season ticket. It was good to finally meet him and I enjoyed his company.

Wanting to avoid the rush hour traffic, I got to the stadium ridiculously early. I made a small meat supreme last as long as possible in a nearby Pizza Hut and then took an amble around the ground. Walking past the away section, there was already a very healthy number of orange shirts milling around and enjoying an early evening beer. Could we be in for a decent attendance tonight given the size of the away following? Alas, no. The attendance was announced during the second half as just over 1,500 - our lowest turnout of the season. I don't know what the club has to do to get more home fans through the turnstiles. I know it was a Wednesday night and there was rain in the air but come on guys, let's support our local team!

To the game itself, First half?

Virtually all of the games I've watched this season have started slowly as the two teams get a feel for each other but that wasn't the case this evening. Both teams went at it from the kick off and the first twenty minutes was exhilarating end-to-end stuff. I was particularly impressed with Khorat's number 11, Henry, and singled him out early as the danger man. In fact, in the opening exchanges, it was Henry who came closest to opening the scoring, hitting the upright after a powerful solo run down the left wing.

Khorat failed to build on their bright start though and the home side gained a foothold with some delightful midfield passing play, albeit with no real end product.

Gian made the observation that the relatively small-size pitch (compared to other Thai Premier clubs) really suited Samut Prakan's passing game. We were also welcoming back Captain Peeradol after his suspension against Bangkok United and the blonde midfield play-maker makes such a difference to the side.

Samut Prakan finally got the breakthrough three minutes before the interval. Picha Autra feeds a perfectly weighted through ball to Srinawong, whose powerful shot cannons off the left stick. And there's Teerapon Yoyoei to react quickest and tap in the rebound.

Half time: Samut Prakan 1 Khorat 0 - and the men in orange could probably feel a tad unfortunate to be behind at the half-way point. But there's a long 45 minutes still to play and I wouldn't dare call this one.

Surprisingly comfortable for Samut Prakan I thought. Khorat just didn't reach the levels that they attained in the first half but take nothing away from the home side, your opponents can only play as well as you let them and Samut Prakan turned in an excellent performance in that second half.

The decisive second goal came on 72 minutes and the second of the night for the lively Teerapon, although it's not one the Khorat goalkeeper will want to see a replay of.  The ball gets lumped forward from midfield, the keeper comes out to clear his lines but seems to change his mind at the last second and ends up missing it completely. Teerapon is left with the task of side-footing the ball into an empty net and it's pretty much game over.  Ibson Melo has the chance to put some icing on the cake but squanders a decent chance in the dying seconds. A 2-0 home win will do nicely though. (match highlights)

A super win and an excellent all-round team performance against tricky opponents. The three points take us up to 3rd in the table and it feels like our season is back on track after Sunday's defeat at Bangkok United. Shame about such a poor attendance tonight but those who turned up managed to create a good atmosphere.

It seems that our manager, Surapong Kongthep, has resigned. The story is still unconfirmed but it would be a devastating blow to lose a guy who's done such an incredible job for the club and is considered one of the best young managers in Thai football.  I don't even want to think about who might replace him.

We've something of a welcome break now with the next league fixture scheduled for Saturday 15th June and a trip to bottom club Suphanburi.