So it's the final game of the league season - away to Port FC?

Yes, and this is probably the one away match I've been looking forward to most of all. The PAT is a nice compact stadium with a good atmosphere and relatively easy to get to by public transport.  Here's a nice little pre-match teaser.

A shame that there is nothing really riding on the result?

Yes and no (from my point of view). Port's title aspirations disappeared with a 3-1 defeat at Buriram last Sunday but they are still in the FA cup final on 2nd November against Ratchaburi.

Can you imagine the clamor for tickets if Port had gone into this game with a chance of winning the league? Fans would've been camping out on Friday night.  So at least with the dream of a league and FA Cup double over, we're hopefully not going to have any problems getting in because I would hate to miss this one.

Oh what a magical night that was! A packed house in Samut Prakan and a hard-fought 2-1 victory. I would say easily the most enjoyable home match of the season, both for atmosphere and the result. Sadly it's all gone downhill for us a bit since then.

Port have had a pretty decent season though?

I think it's best to put that question to a loyal Port follower. Tim Russell runs the excellent Sandpit, Port's English language website (well worth a look!) So how would he summarize Port's league season?

Tim says:  For Port, 2019 has been very much a case of What Might Have Been. Runaway leaders in the opening half of the season, banging in the goals and playing some swaggering, swashbuckling football, only for things to go very, very pear-shaped following a home defeat to Buriram which sent the team into the usual mid-season slump. Madame Pang, having simultaneously suffered World Cup humiliation with the Thai women's team, pushed the panic button and made some rather ill-advised transfer moves, most notably dumping loyal captain and club legend David Rochela, and replacing him with a classic Carlos Kickaball 'striker' in Rolando 'Tony' Blackburn.

But the replacement of long-serving coach Jadet with former Thai national U23 coach Choketawee sparked a revival, with Port going on a run which took us to the FA Cup final and put us back in the title race. Sadly Sunday's somewhat contentious defeat at Buriram put paid to that, and we can look back on disappointing defeats to the likes of PTT Rayong, Sukhothai and Samut Prakan, as well as a handful of frustrating draws, that cost us the title. That said, third place and a cup final is not to be sniffed at, and we did beat Muangthong three times, so overall it's been another enjoyable season that will hopefully end with a trophy. (follow Tim on Twitter)

If Port were still in with a sniff of the title and put out a full-strength side, I could see Samut Prakan getting mullered. However, with one eye on the FA Cup final, Port might see it as a chance to rest some of their regular starters. I'm going to stick my neck out and go for a 1-1 draw. We haven't had all that many drawn games this season and I feel we're due for one.

How many fans will Samut Prakan take?

Probably the usual 150-200 that we took to the likes of Muangthong and Bangkok United. It's strange but I see the same faces at every Samut Prakan home game, but they never travel away. Take the season ticket holder who sits next to me for example. Whenever I ask him if he's going to the next away match, he just looks at me as if I've gone slightly mad. And yet win, lose or draw, I always feel away games are far more enjoyable. There's something exhilarating about proudly wearing your club colours and being in a small minority.

Who's accompanying you to the game?

If everyone is up for it, there will be me, my wife and my Thai pals Benz and Neigh. For some reason Benz is not keen on wearing his Samut Prakan shirt in Klongtoey. He's ever so slightly 'bricking it' you might say and I keep reminding him that it's not f***ing Millwall we're going to.  I've told him that I've organised us a police escort from the MRT station and that seems to have calmed him down.

So who went in the end?

Just me and Benz.......and he decided to take his pick-up.  We got to Port's PAT stadium in about half an hour via the expressway. 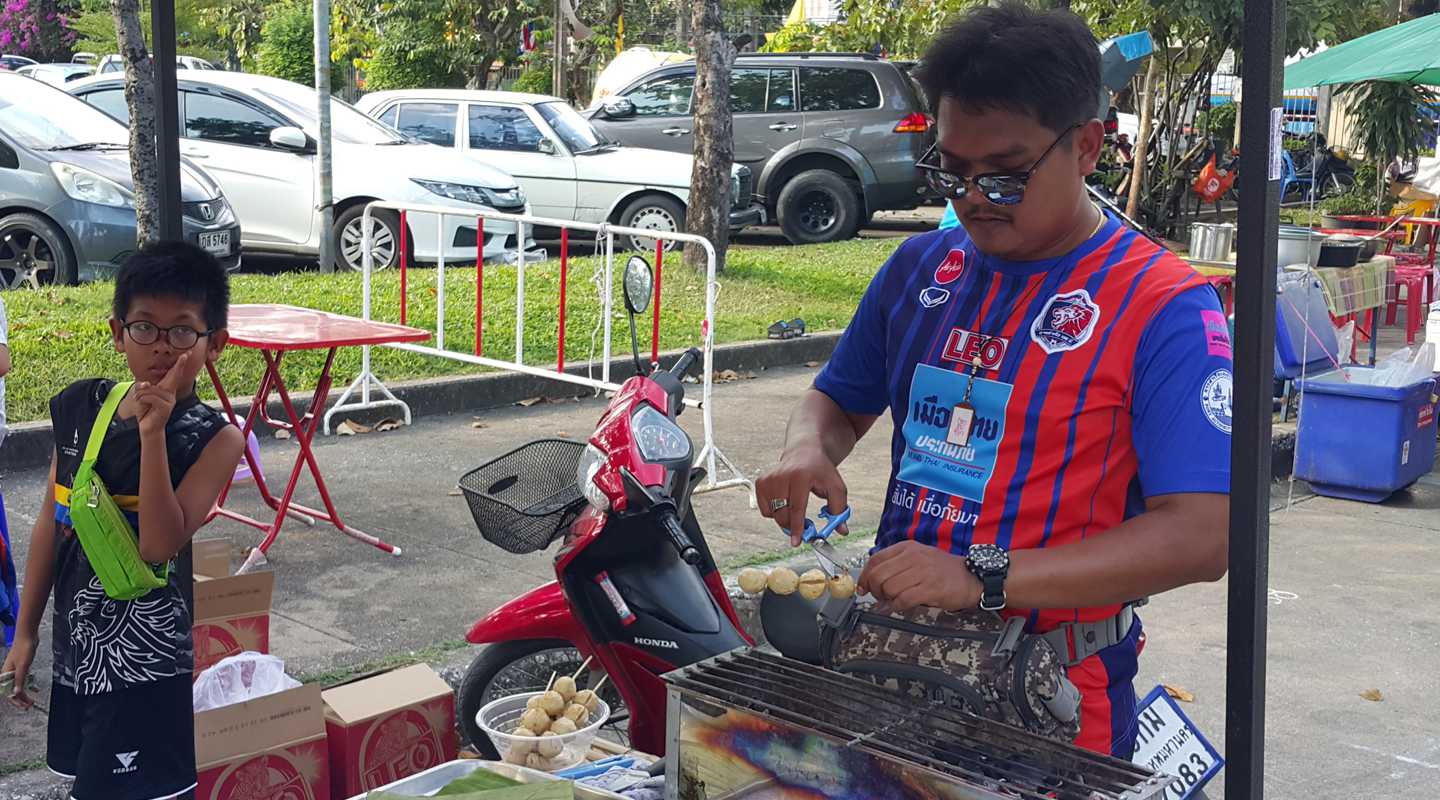 We were at the stadium two hours before kick off so had no trouble finding a place to park. From there we had a walk around the ground, took a few photos, chatted with some home fans and perused the drinks and snacks on offer in the Port fan zone - and there was plenty of choice! The whole area was a hive of activity with various games and promotions going on. They really do have a fantastic pre-match set-up at the PAT. How and where to buy tickets for the away end is a bit confusing but we got them in the end. Once inside the stadium, the seats are great. You are so close to the pitch and the action. It's simply a wonderful place to watch a football match. 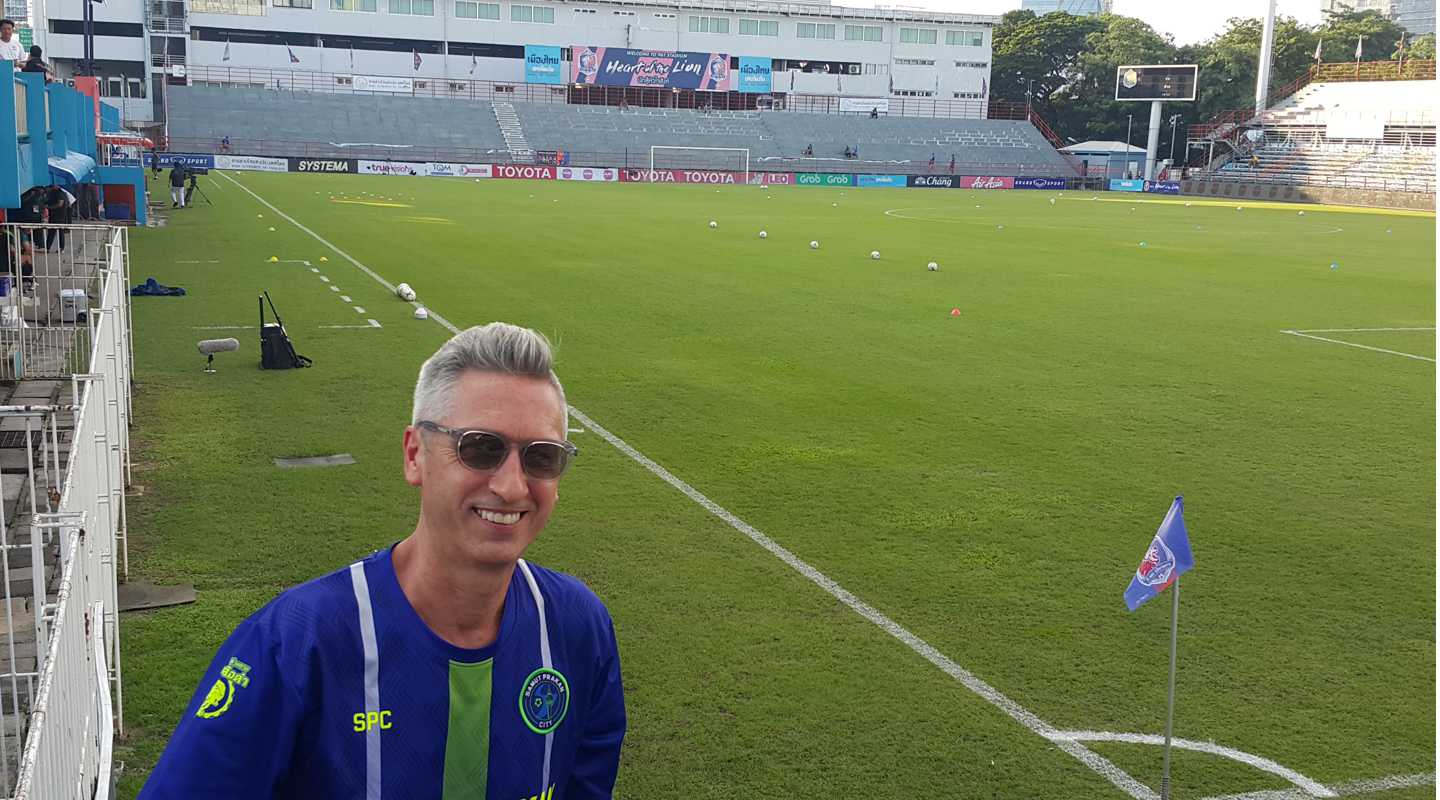 Best stadium that you've been to in the Thai premier league?

I would say so. When you take the seats, the view, the atmosphere, the pre-match activities and the fan zone into consideration, you have the complete package. Benz accompanied me to Muangthong FC earlier in the season and he felt that their SCG Stadium is marginally better; however, I disagree. I think Port's ground just shades it. 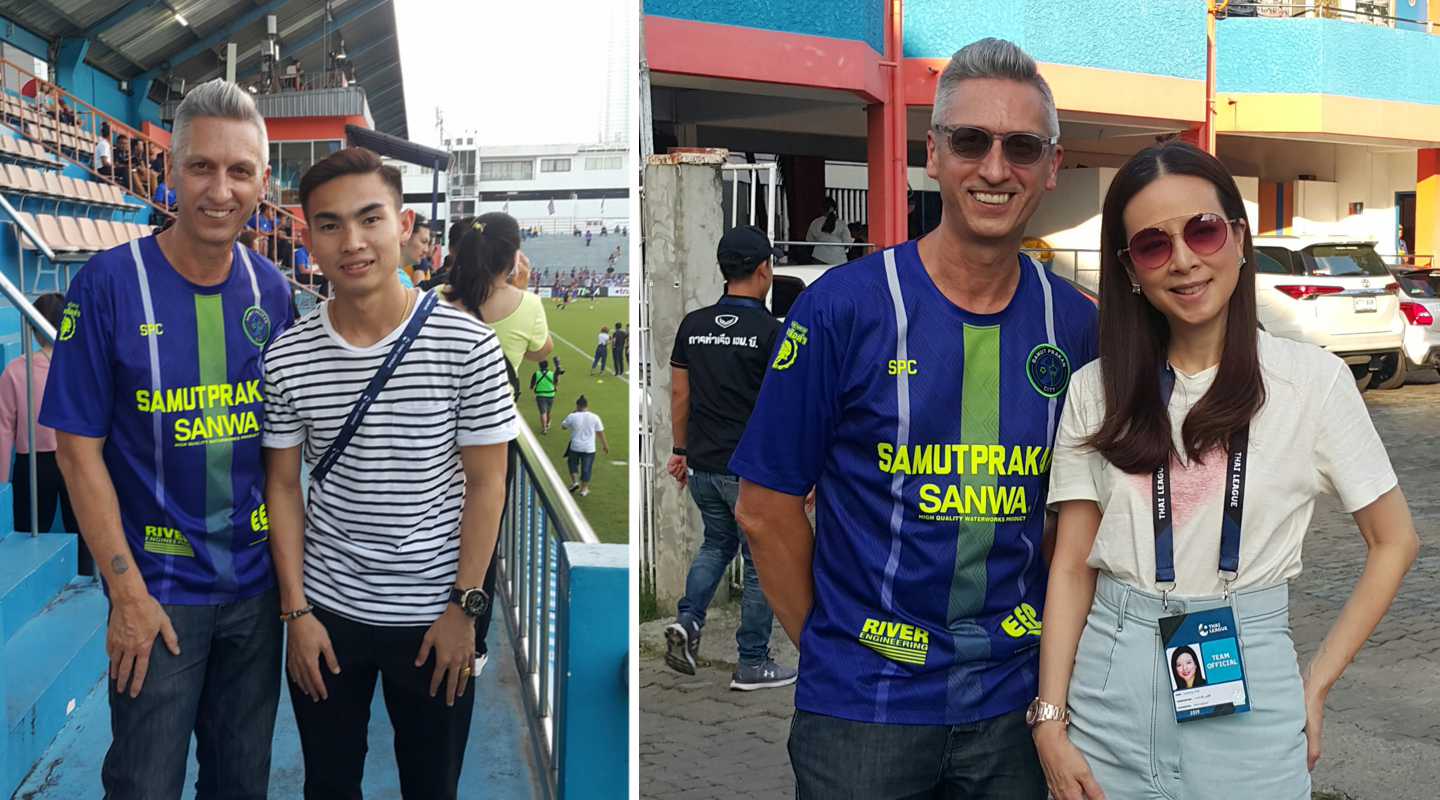 And the chance for a few photo ops with the stars before the match?

Yes. I got a photo with Murayama-san, the Samut Prakan boss, and also one with Jaroensak, our star winger, who was sitting the game out with injury. What a lovely, polite young man! Probably best and most surprising of all was getting a photo alongside the legendary Madame Pang, the owner of Port FC. I have to say that she is one extremely striking and beautiful lady close-up. 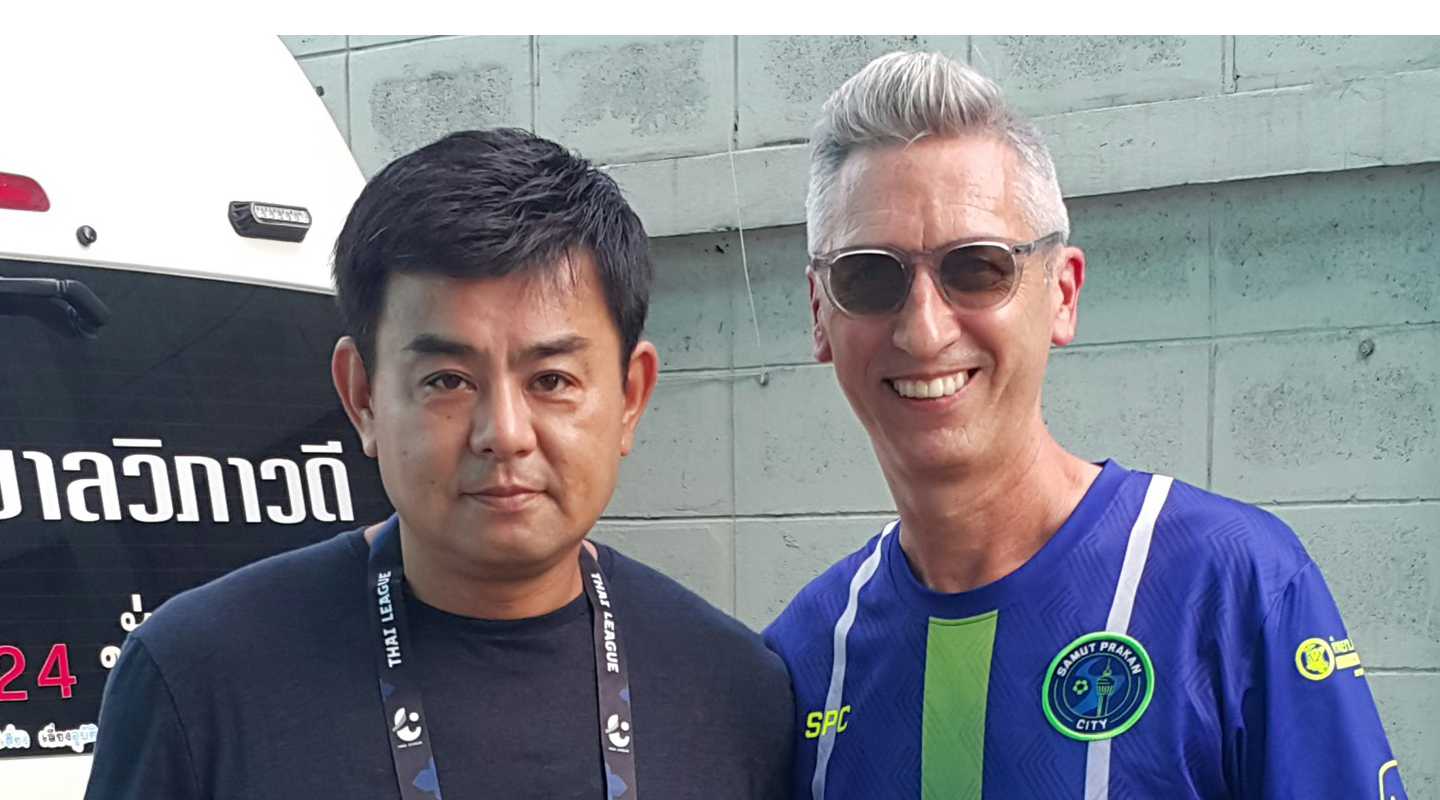 To the match itself, first half?

I'm not going to go into much detail because as expected, Port played a significantly weakened side and Samut Prakan didn't look to get out of second gear. It felt rather like a friendly match with nothing at stake.

Port opened the scoring in the 7th minute with a neat Rolando Blackburn header in what was possibly the home team's only goal attempt of the first half.  Ibson Melo's 15th goal of the season put the visitors back on level terms shortly before the break with Teerapon Yoyei providing the assist. 1-1 and all square at half-time. 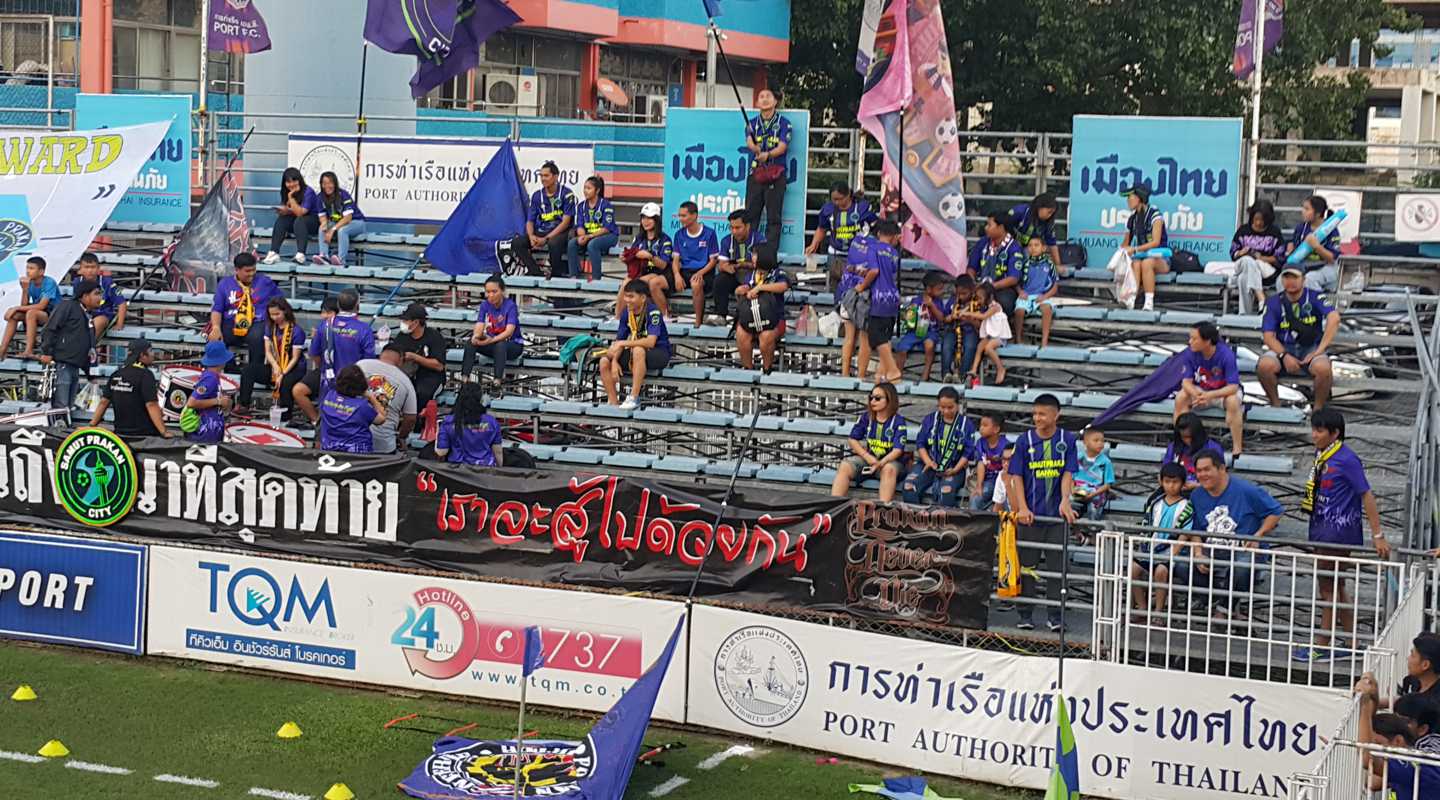 I had hoped for better things in the second half with Samut Prakan kicking towards their sizable away following, but the men in white turned in a mediocre 45 minutes to end the campaign. But despite Port having virtually all of the possession, Teerapol Yoyei puts Samut Prakan ahead on the hour mark, side-footing under the keeper after a smart through-ball from Picha Autra.

The Port equalizer was always coming but we had to wait until five minutes from time for Rolando Blackburn to head in his second of the night from a pinpoint right wing cross amid some ineffectual marking from Samut Prakan's Korean number 4, Kim Hoyeong, who I think continues to look out of his depth. (match highlights) 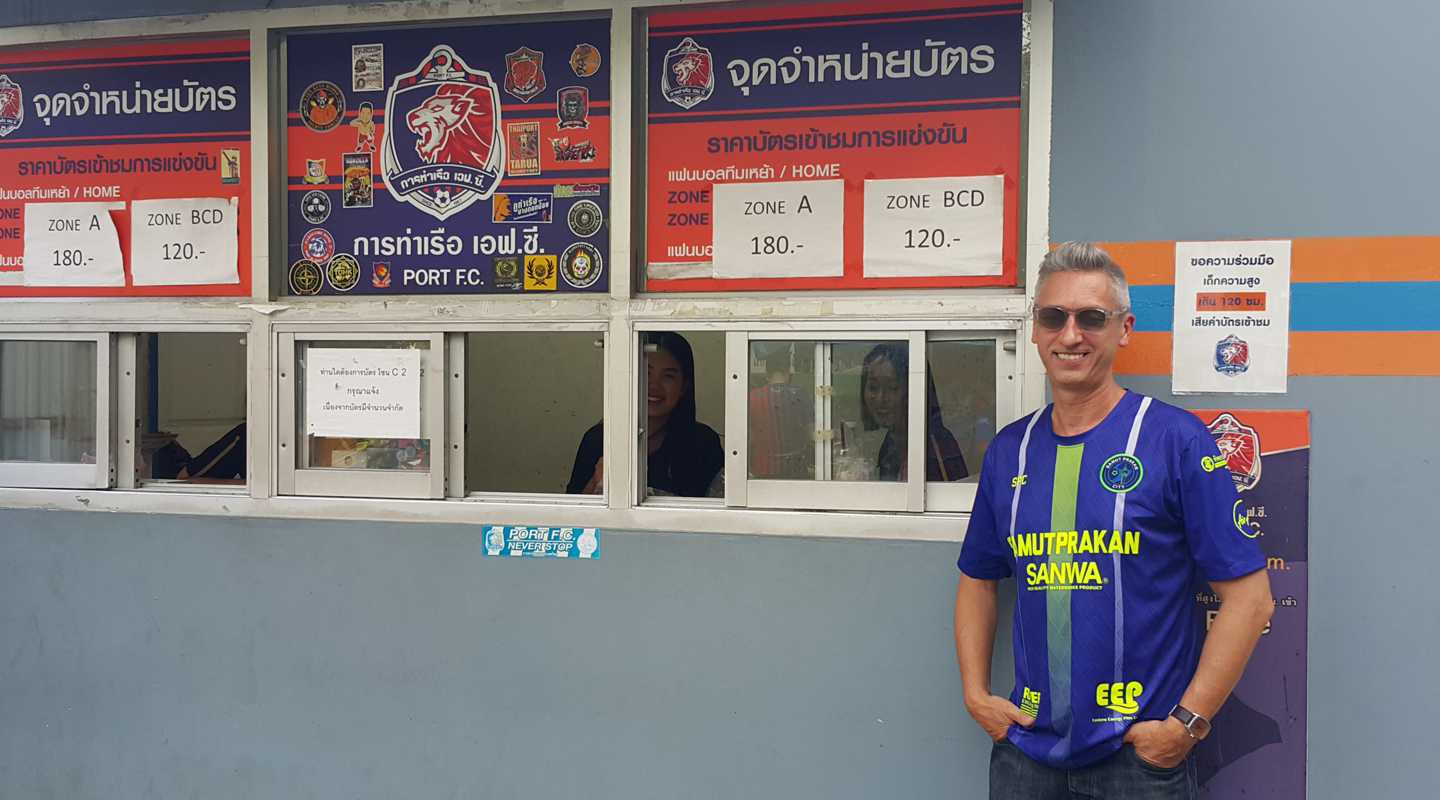 A fabulous day out. I'll say it once more - what a fantastic place to watch a football match. The outcome of the game itself didn't seem to matter.

But what was that big roar from the Port fans just after the final whistle?

OMG! The results are in and Buriram could only manage a 1-1 draw away at bottom club Chiang Mai and Chiang Rai have smashed Suphanburi 5-2. They've snatched it right at the death. Chiang Rai are the 2019 Thai Premier League champions. Heartbreak for Buriram.

So see you again next season?

Yes, we've got a nice three-and-a-half month break from now until mid-February I guess. It's been a very interesting nine months following Samut Prakan and I got to see 22 out of 34 league and cup games, which wasn't too shabby for my first season. Let's do it all again next year! 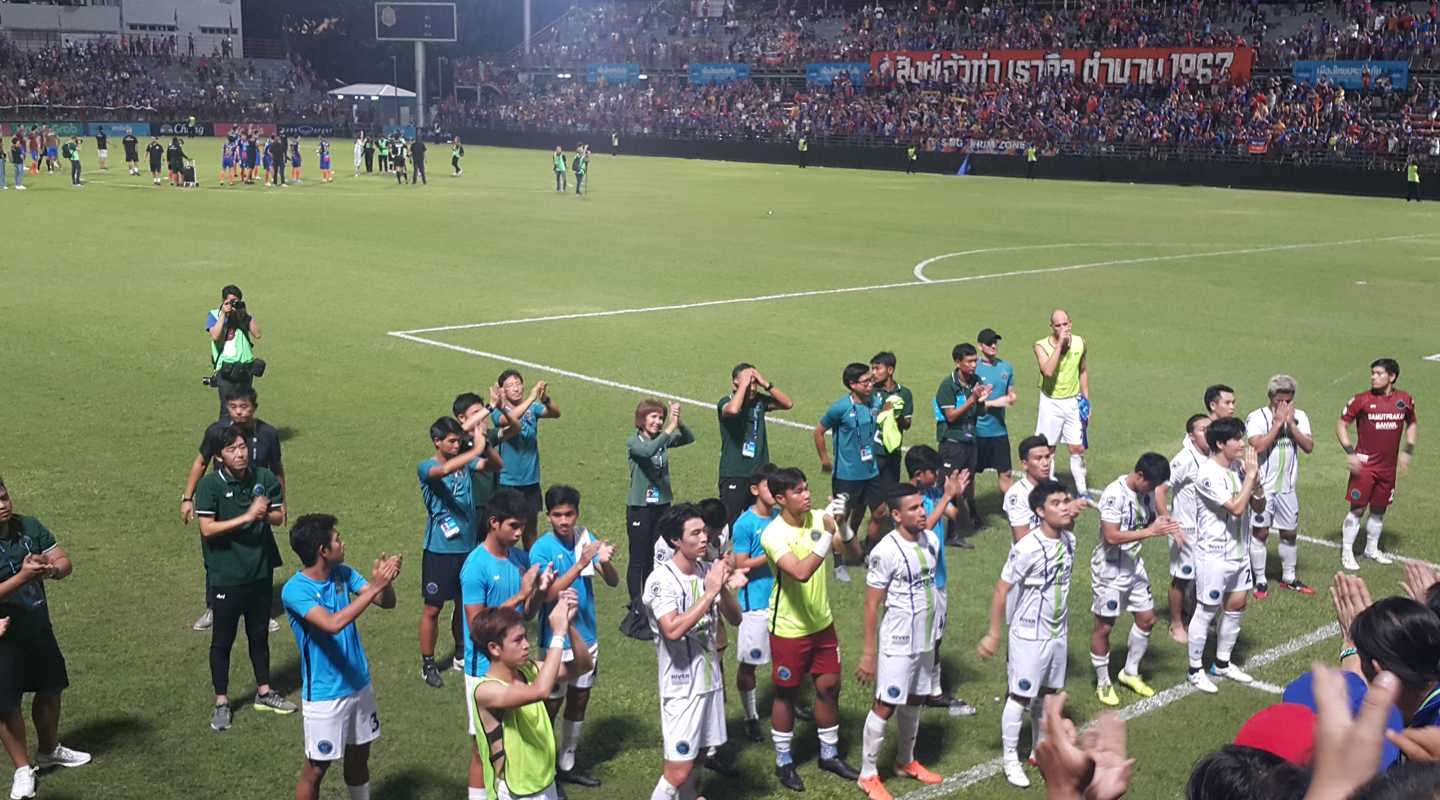 Stumbled upon your blog. Good read.

"..it's not f**king Millwall..." Pray tell! What is wrong with us lovable, misunderstood Lions supporters? Please confirm that you're not a Nigel (Palarse fan)?