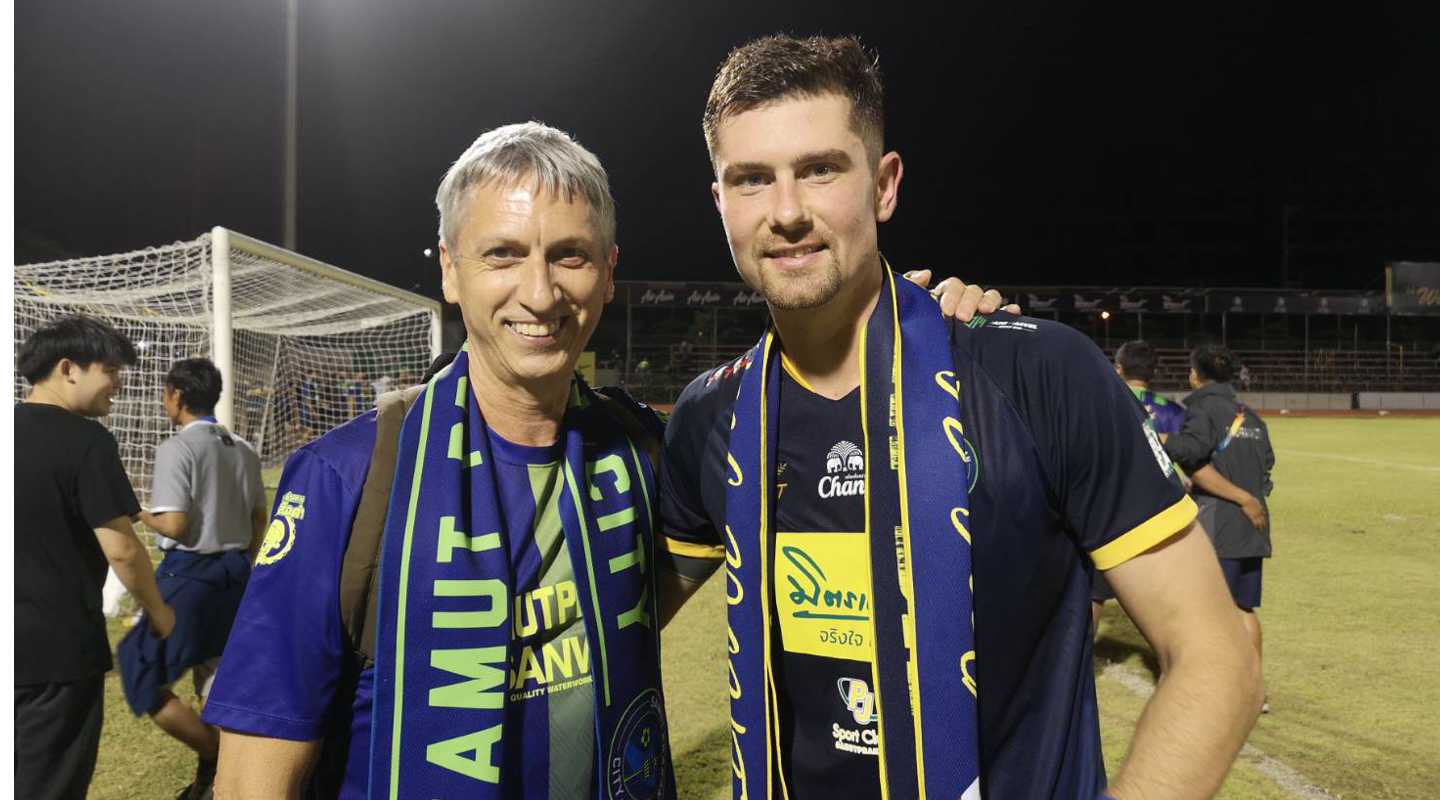 Nicknamed The Crowns, Rajpracha are a pretty old football club by Thai standards, founded in 1966 by a police major general.

By rights they shouldn't really be playing in T2. Last season they finished in the bottom three and were technically relegated but were granted a reprieve when Muangkan FC, a club from Kanchanaburi, folded due to financial problems.

In the last 15 years, they've moved stadiums a staggering ten times. If you're a Rajpracha fan, you should never make yourself too comfy.

They've won the Thai FA Cup four times but fair to say they got their hands on the trophy when it was far easier to win than it is nowadays.

According to Thai media reports, cash-strapped Rajpracha is a club in crisis with the very real possibility of losing many of their best players in the second half of the season. One always hates to see Thai clubs fold but Rajpracha appear to be a main contender for the chopping block.

They're perhaps not the most glamorous of opposition then?

No, I'll confess it wasn't the first game I looked out for when the fixtures were released. Given the opposition, combined with a 6.00pm Friday night kick off, I'm expecting a pitifully low attendance for this one. I would be pleasantly surprised if it's over 300.

But Rajpracha are having a decent season?

They are. The Crowns currently lie two places above Samut Prakan in 8th so this is the definition of mid-table tussle. Rajpracha have done reasonably well on their travels, losing only two of their five away matches. They did get thumped at home on Saturday though, losing 4-1 to Uthai Thani, so will confidence be low?

Who's their main goalscoring threat?

Captain Ronnachai Rangsiyo has banged in 5 goals this season. Known to friends and fans as 'Sam', the 34-year old forward has played for almost a dozen clubs in Thailand including Super Power Samut Prakan back in 2017. I asked about him on the Samut Prakan fan forum and he seemed to be fondly remembered despite only making a dozen first team appearances. He also spent part of his youth career at Everton!

How is the T2 table looking at the moment as we approach the half-way stage in the season?

The top three - Ayutthaya United, Nakhonsi United and Suphanburi - are all looking fairly strong at the moment and I wouldn't be surprised if two of those clubs go on to get automatic promotion come the end of the campaign. My money is on Suphanburi for champions. At the bottom of the table, Udon Thani FC, with just one win this season, are eight points adrift of safety and already look set for the drop.

Let's get to tonight's match

With time to kill before kick off, Tun and I lingered over drinks in the only decent coffee shop near the ground, where we bumped into Khun Thatpicha, Samut Prakan's first choice goalkeeper. He told us he was recovering well from the injury he sustained on Sunday at Ayutthaya United but wasn't available for this evening's game. Fortunately Samut Prakan fans have the greatest confidence in his deputy Supawat Yokakul; however, the goalkeeper's curse was about to strike again.

Half an hour before the scheduled 6pm start and the ground staff still hadn't opened gates to the stands. The whole occasion had an underwhelming low-key feel to it and sure enough the official attendance was announced later as just 129 - Samut Prakan's lowest ever attendance by some distance. It's heartbreaking to see so many empty spaces and think back to times when the stadium rocked to the noise of 3,000 - 4,000 cheering fans. Although one fan did remark to me that many Thai football supporters just can't get to games on a Friday evening, you can't blame a pitiful attendance of 129 on that alone.

To the match action and Supawat, starting only his third game of the season in the Samut Prakan goal, is called into action early, tipping over a long range effort that would've given the visiting side and their modest away support the perfect start. Samut Prakan's first decent chance comes on the quarter hour mark but 17-year-old boy wonder Yodsakorn heads wide.

The game develops into an entertaining end-to-end contest. Samut Prakan midfielder Nititorn fluffs the chance of the half, hitting the goalkeeper's outstretched leg from point blank rage with the goal gaping. As we approach the half-time interval, Samut Prakan fans are thankful for the absence of goal-line technology as Supawat thwarts a Rajpracha attack but to the naked eye, makes contact with the ball from behind the line. Is Lady Luck on our side this evening?

Samut Prakan make a couple of mystifying substitutions at the start of the second period (unless they are forced by injuries) African midfielder Evans Aneni, who I thought had been the best player out there, is replaced by Kriangkrai and it's also the end of main striker Padsakorn's evening. The biggest story however is Supawat having to relinquish the goalkeeping gloves and giving an unexpected chance to third choice keeper Ratchapon since his below par performance at Bangkok FC in the FA Cup.

Samut Prakan come close to breaking the deadlock on 50 minutes as Sho Shimoji latches on to a through ball but the veteran Japanese midfielder sees his deft chip over the keeper roll agonisingly wide. However, it's Rajpracha who take control of the game and look the team most likely as Makan heads over from a free kick and Ratchapon does well to keep out a rasping drive from Somroeng with a quarter of an hour remaining.

What turns out to be the Samut Prakan winner comes somewhat against the run of the play. Yodsakorn thunders a shot against the crossbar and with the woodwork still rattling, Samut Prakan keep up the pressure and Phantamit writes his name in the headlines with a low shot into the bottom corner.

Supawit then has a great chance to rescue a point for the visitors as we approach the 90-minute mark but shoots straight at the keeper. 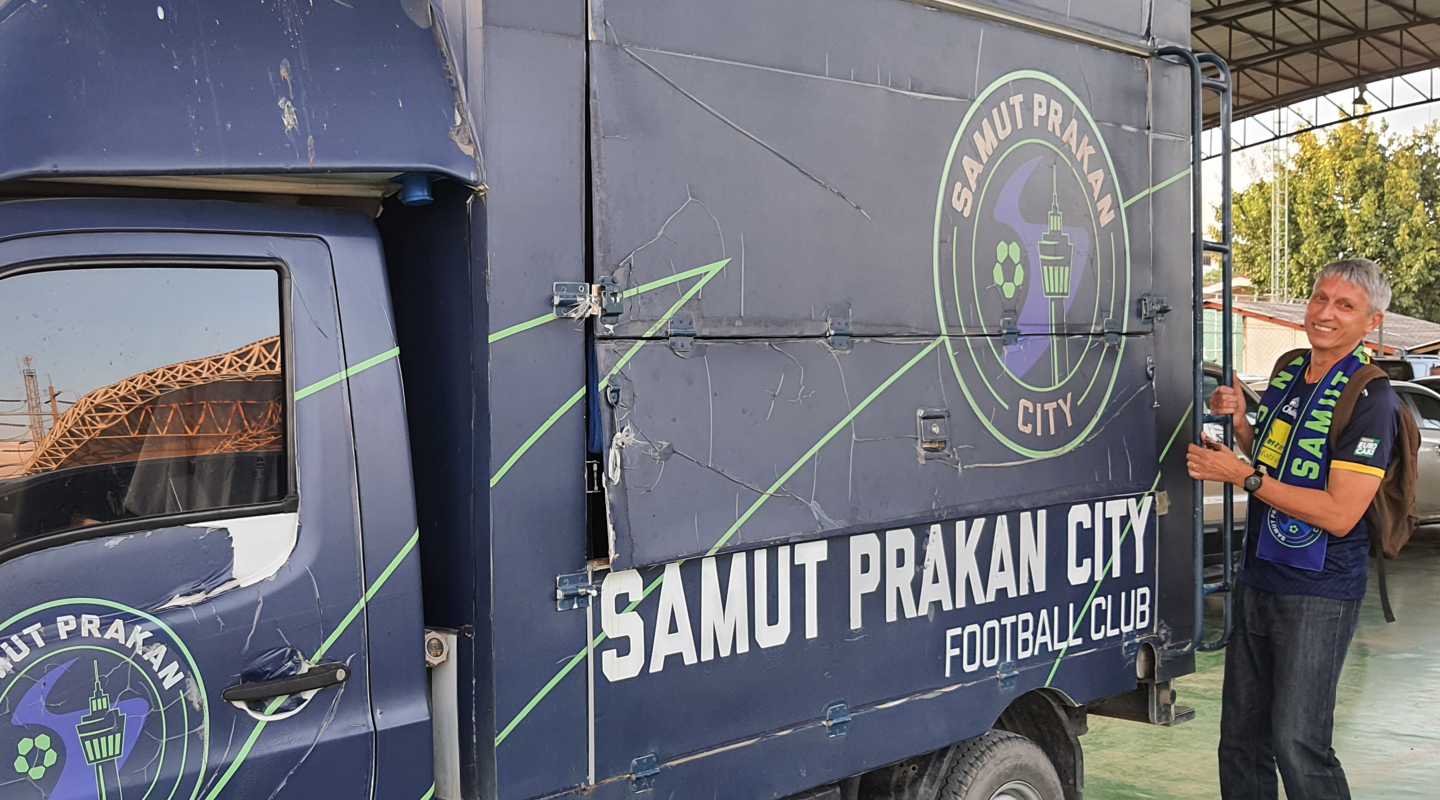 (It's looking a little the worse for wear, but good to see the Samut Prakan merchandise van is still around)

I'll take that result thank you very much. A run of five winless league and cup games comes to an end with another battling performance against tough opponents. And for one night at least, Samut Prakan move into the play off places. I'm not saying that's where we'll be come the end of the season but for now it's just nice to be at the right end of the table. 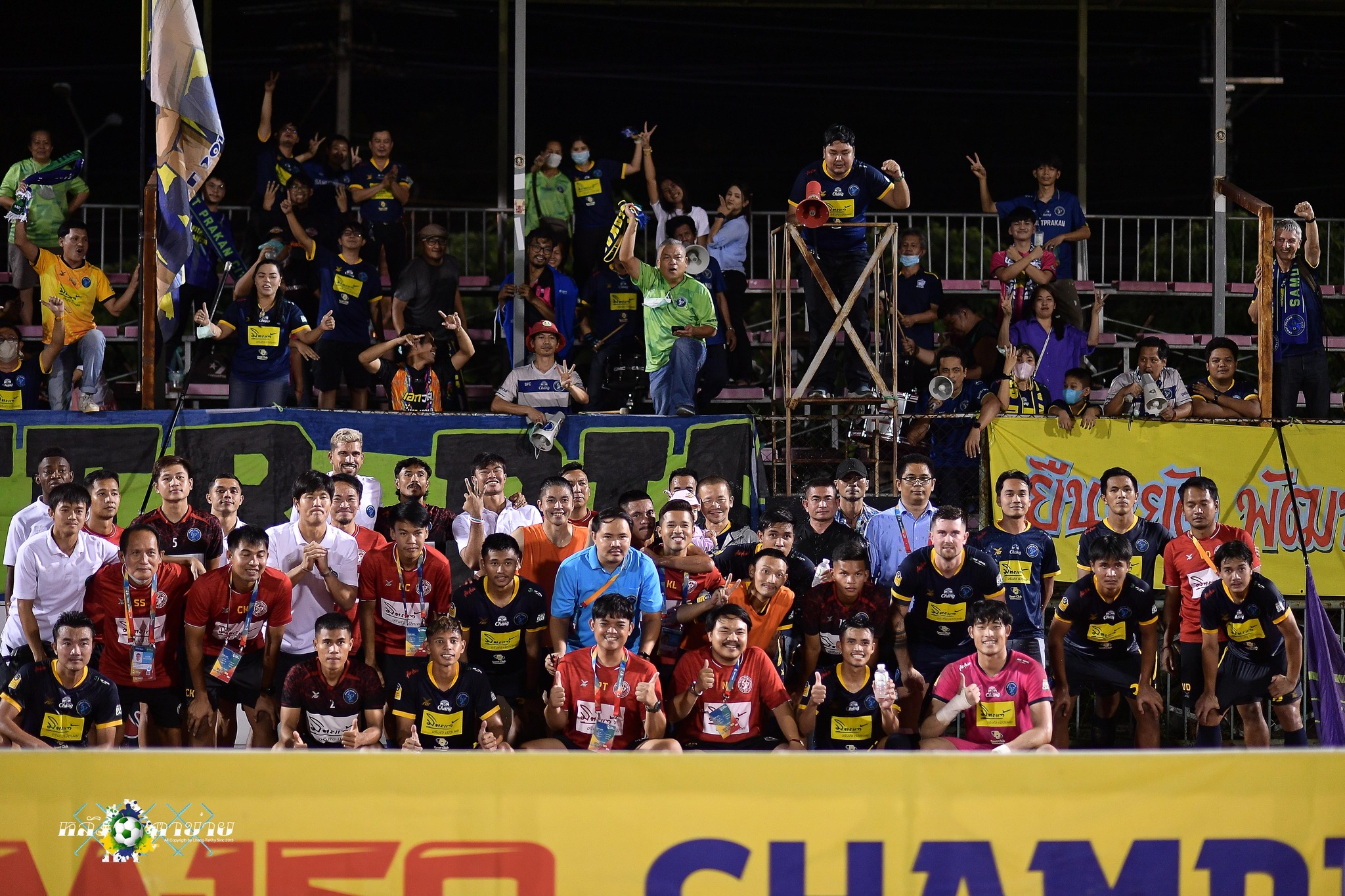 (Another night of celebration. Photo credit: Back of the Net)

It's a 4-5 hour drive south-east, almost to the Cambodian border, to play Trat FC on Saturday 19th November.

Absolutely! We love this part of Thailand but neither of us has spent much time in Trat Province. We'll break the journey up with a night in Chantaburi, then have a couple of nights in Trat, and do Sattahip on the way back home to make it another decent football road trip.