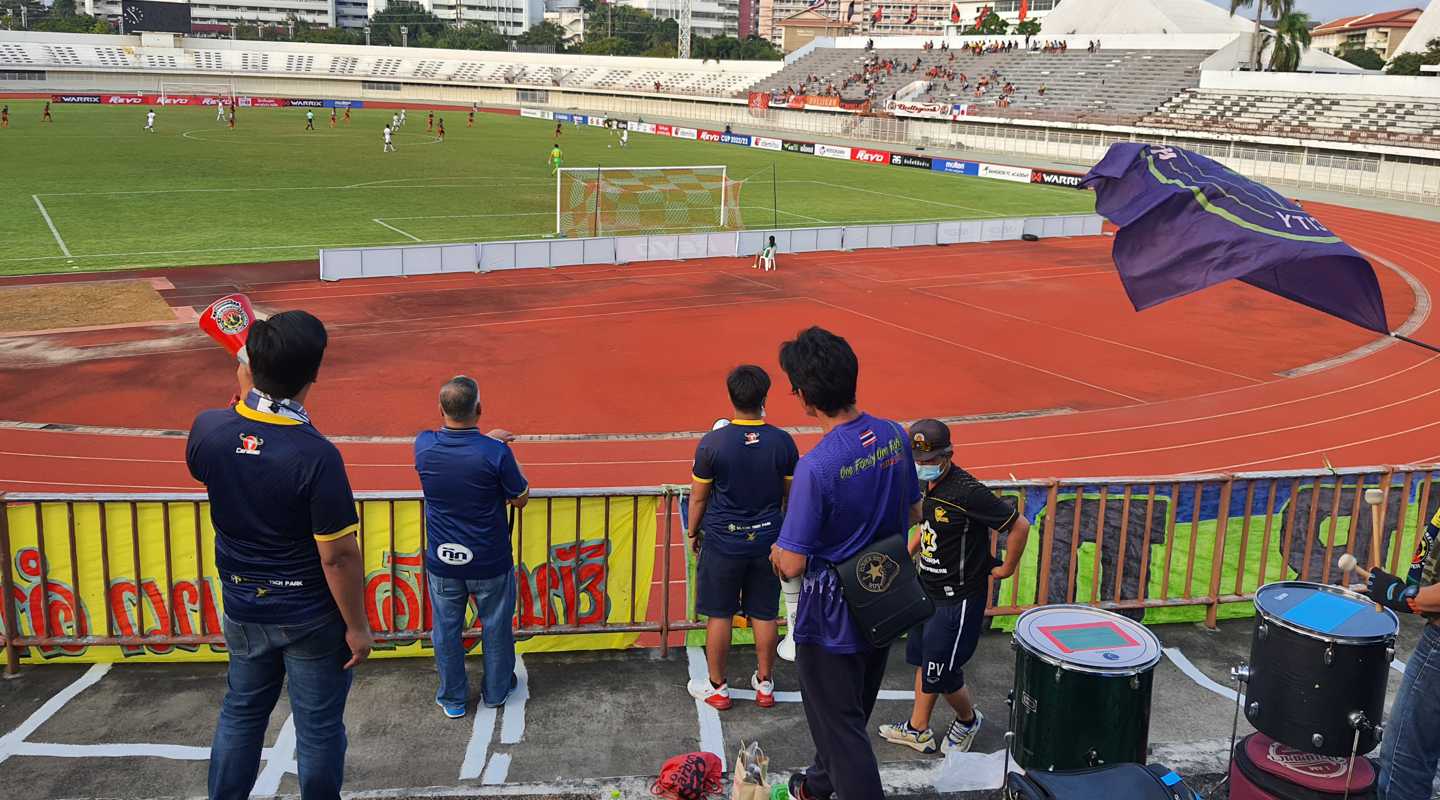 You're no stranger to Kasetsart FC's Insee Chantarasatit Stadium?

No, I went there towards the end of last season to see Kasetsart play Sukhothai with my good friend (and Chiang Mai FC fan) Rob Scott, so we were both neutral supporters in the crowd that day.

It's a very compact and tidy ground right in the heart of the Kasetsart University campus and must be one of the easiest stadiums to get to by public transport. Simply take the BTS skytrain to Kasetsart Station and from there it's a five-minute motorcycle taxi ride to the other side of the university complex.

One thing I do clearly recall from that solitary visit was the lack of atmosphere generated by the home fans. Not only were there no drums or megaphones or pockets of noisy 'ultras' in evidence but I hardly saw anyone wearing a Kasetsart replica shirt. Never mind, the Samut Prakan travelling support will show them how it's done! 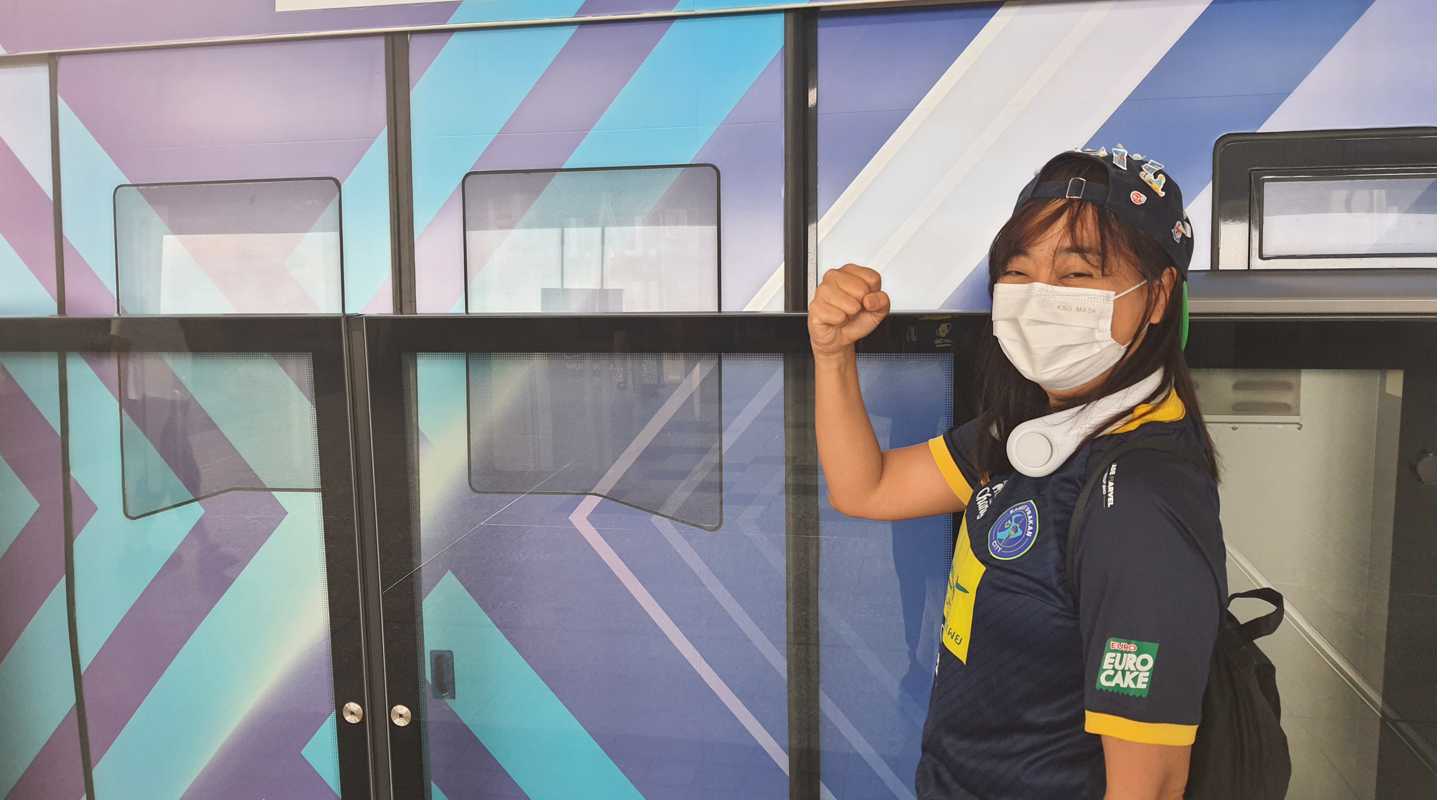 (It's the only way to travel to Kasetsart)

A bit of club background?

Kasetsart FC (nickname: The Emerald Nagas) were founded in 1988 and spent many years in the Bangkok regional leagues until winning promotion to the second division in 2016, where they've been ever since. In the past five second division seasons, somehow they've managed to survive, finishing between 12th and 14th every time. One day surely their luck is going to run out. This season has again been a struggle and they currently lie just above the relegation zone in 15th place. They have won only one of their four home matches so far.

Notable milestones in their history include the 2010 League Cup when the players downed tools and walked off the pitch during a game against Nonthaburi FC and were then booted out of the competition. However, I believe players walking off mid-match when there was a decision they were unhappy with was quite a common sight in years gone by.

For the following season (2011) considerable money was pumped into the club and expectations were high...until Kasetsart's home stadium fell victim to some of Bangkok's worst ever flooding. The pitch was so badly damaged the club had to eventually relocate an hour away to Nakhon Pathom. The upheaval cost them dearly as they were pipped at the post for a play-off spot. 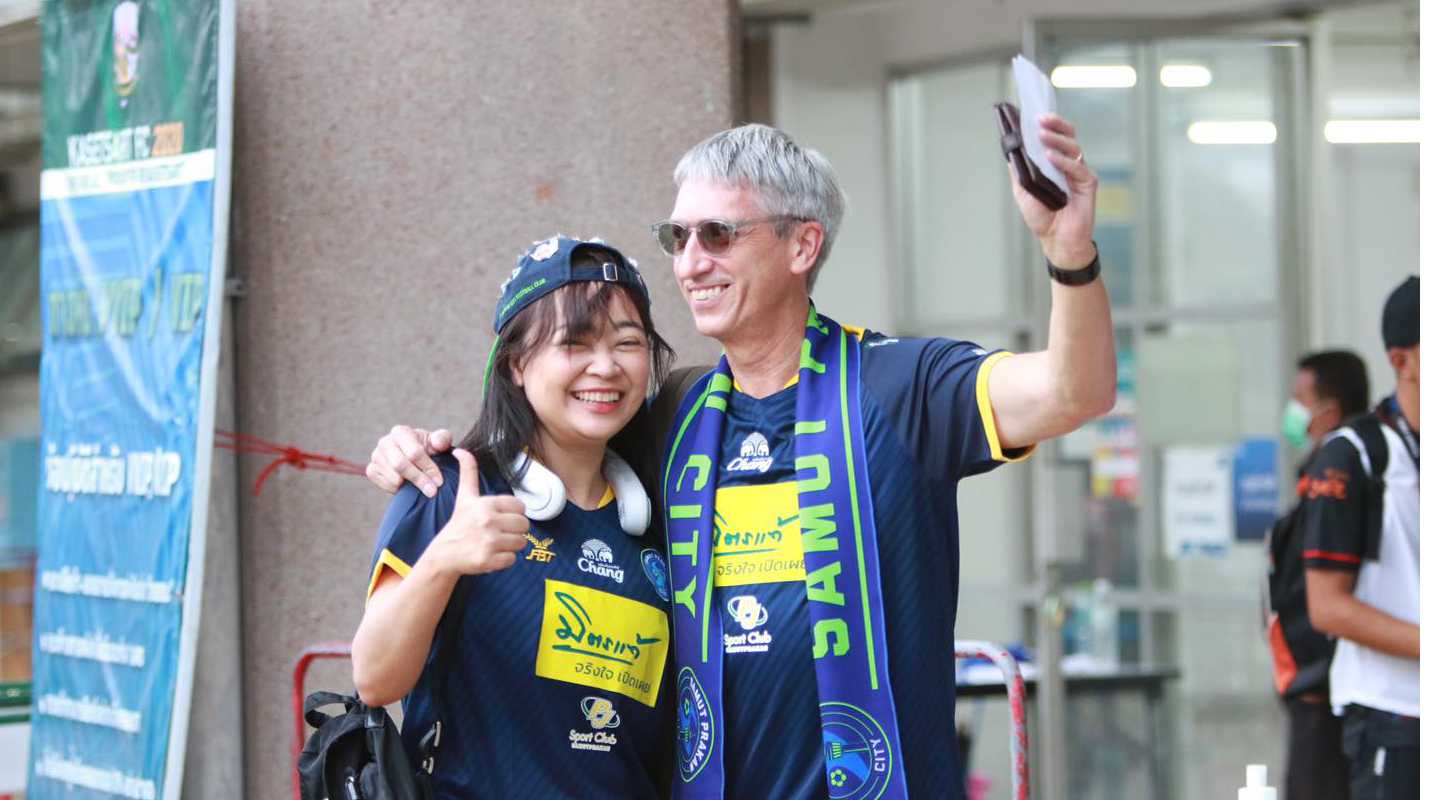 Yes, Anusit Termmee is Kasetsart's 'man between the sticks' and he was Samut Prakan's second choice keeper last season. Unfortunately when you are understudy to Patiwat Khammai (now Bangkok United) your chances are going to be severely limited. However, the extremely likeable Anusit did manage to write his name in Samut Prakan City folklore by saving a penalty at Buriram. I was there for both of Anusit's SPC appearances last season (against Buriram and Pluakdaeng United in the League Cup) and thought he looked a very capable shot-stopper and a decent prospect. Good to see him getting decent game time at his new club. He wasn't to feature in tonight's game though.

Kriangkrai Pimrat, currently a regular starter in midfield for Samut Prakan, was on Kasetsart's books last season but failed to make an appearance.

Who else plays for them?

Quite an interesting collection of players actually. Soe Moe Kyaw is an aggressive Burmese defender who plays for the Myanmar national team and is considered by many as a red card waiting to happen. The much hyped and pants every time I watch him Adalgisio Pitbull is a Brazilian striker who arrived from Rayong FC this season. Top goalscorer is journeyman striker Chakrit Rawanprakon, who started his career at Buriram in 2011 and has since moved to nine different Thai clubs including Ratchaburi and Port FC.

There is a fair old number of skytrain stations between Samrong (where we boarded the train) and Kasetsart University so the train journey, despite the convenience, still took us over an hour. Thankfully we managed to get a seat all the way. On arrival at the stadium and with 90 minutes to kill before kick off, we reeled off a few photos in front of the main stand and then retired to a nearby burger joint. With Kasertsat being a busy university complex, there is an entire complex of restaurants and cafes opposite the stadium. 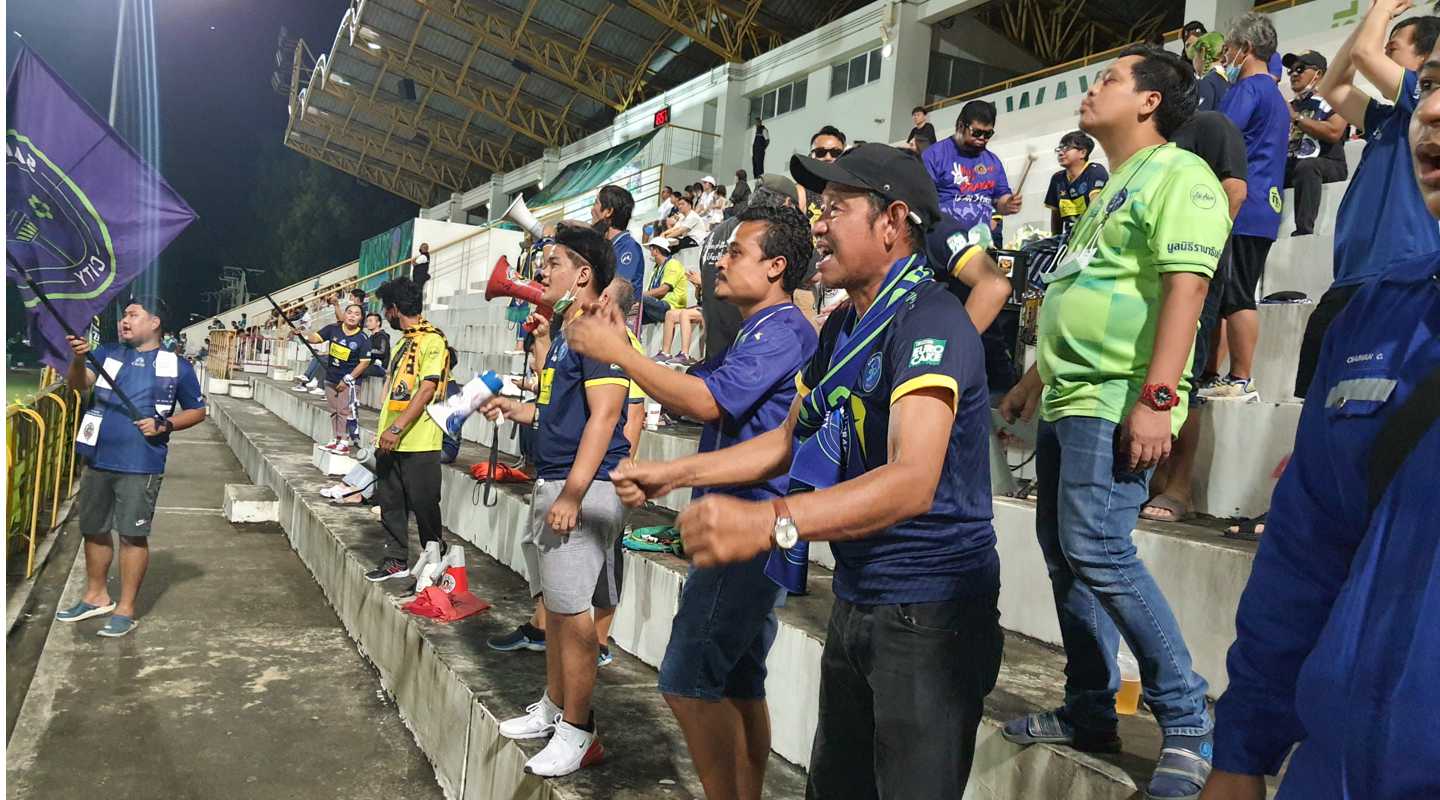 (Fantastic away support this evening)

To the game itself

The first half was a midfield war of attrition, which is a nice way of saying it was a bit of a stinker! The only two decent chances both fell to Kasetsart forward Toto, foiled first by a goalkeeper's outstretched right leg and then shooting into the side netting from an acute angle. The Brazilian striker could consider himself unlucky not to add to his goal tally of one for the season; he was certainly the liveliest player on the pitch.

With little to write about in terms of match action, I should give a mention to Samut Prakan's commendable away support. I hadn't seen fans turn up in that number since some of our away trips to Port and Muangthong. Although we didn't quite outnumber the Kasetsart home fans, it certainly felt like it given the noise levels we created. It actually felt more like a home match at times. My word are those Kasetsart fans quiet. 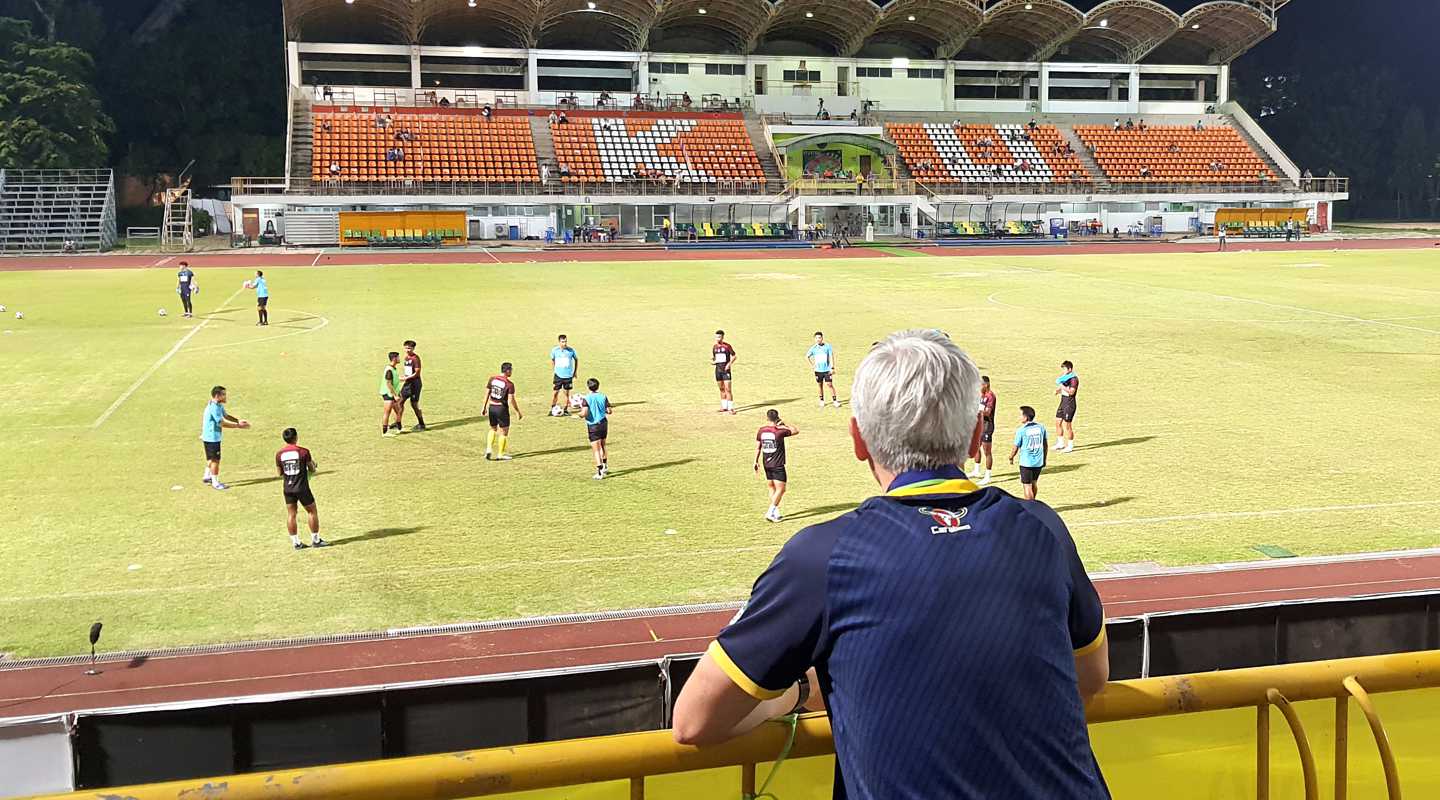 The second period was marginally better but you always sensed the game was either heading for a goalless stalemate or would be won by some flukey goal in the dying seconds. True to script, there's an awful challenge by Soe Moe Kyaw on Pardsakorn as we reach the hour mark. Pardsakorn gets to his feet relatively unscathed while the Burmese defender is carried off on a stretcher. One doesn't like to say justice was served but I will.

Samut Prakan begin to turn up the heat and Yotsakorn sees a low short turned away by the Kasetsart keeper. Both teams then fluff great chances to find the winner in the final ten minutes. Second half substitute Nattawut sidefoots wide for the home side with just the keeper to beat and Samut Prakan's Japanese star Sho Shimoji will feel he should've done better with a tame strike in injury time. 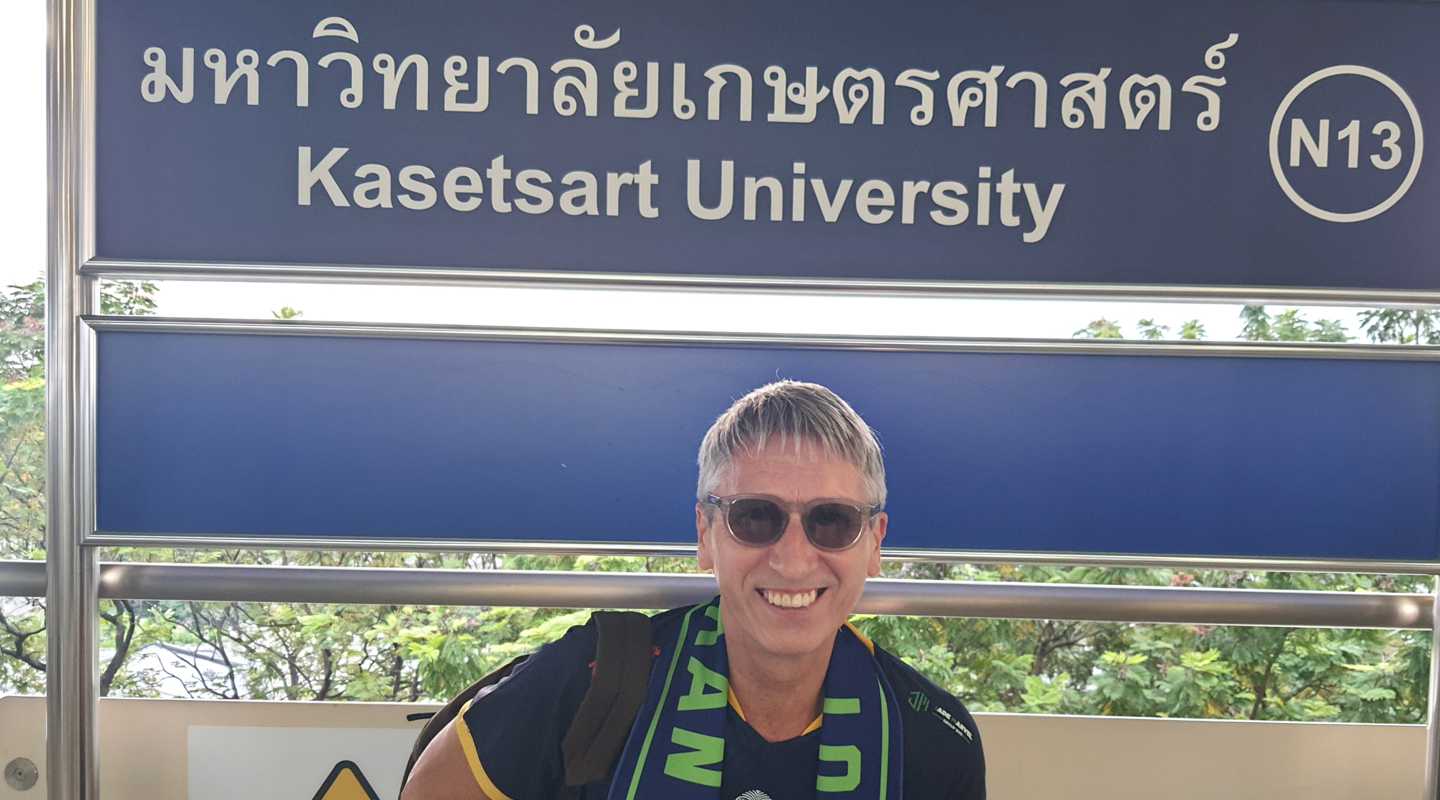 If we are to have any aspirations of promotion, then we need to be beating 'weaker' teams like Kasetsart FC and they are undoubtedly one of the weaker teams in the division. This was most definitely two points dropped. Once again, I had no problems with our defensive and midfield play but we just aren't creating enough up front. Both Samut Prakan and Ranong FC have scored just 8 goals this season. No other team in the division has scored fewer and that rather tells its own story. I love our two main Thai strikers Yodsakorn and Pardsakorn, but they can't be expected to carry us through a long and gruelling championship season, especially if Petru Lueca is going to be limited to ten minute cameos.

One definite bright spot this evening was the performance of Samut Prakan's Nigerian midfielder Evans, handed his first league start of the season. Playing in front of the back line, he brought a much needed calming influence to the side. For me he was the man of the match and I told him so after the game to hopefully give the young lad something of a confidence boost.

We are at home to Chainat Hornbill on Saturday 29th October (7.00pm kick off)