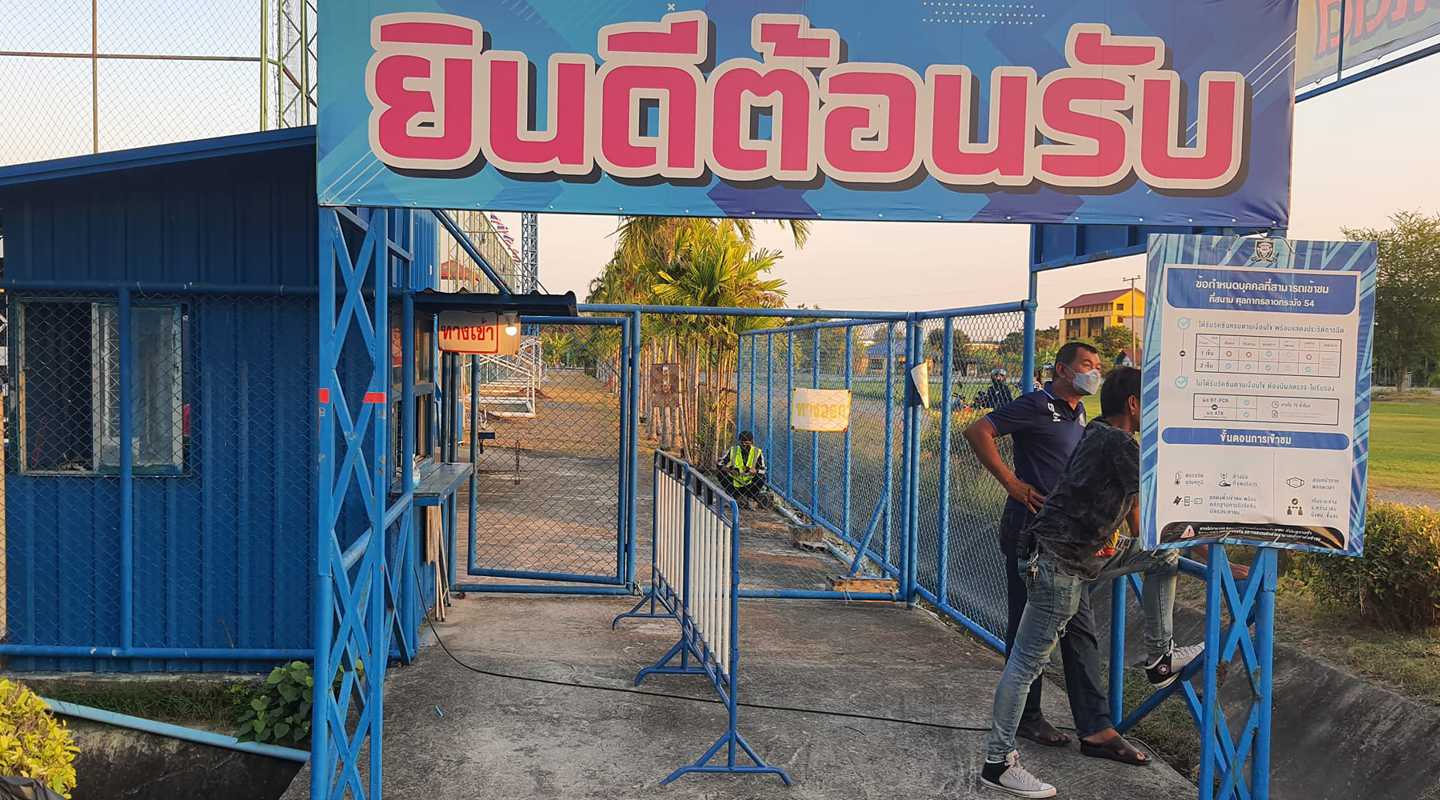 (We're off to Customs United in nearby Latkrabang District. That's the quaint little entrance to the away section)

Firstly, have Samut Prakan brought in a new manager yet?

Not yet. Khun Sothorn, a recently arrived goalkeeping coach from Rajpracha FC, will take charge of the team for this fixture at least while the club looks for a permanent hire. Sorry if that info is inaccurate but I've had to lean heavily on Google translation.

You're no stranger to the Latkrabang 54 Stadium?

No, I've been there twice in recent months as a neutral observer to see Customs take on both Chiang Mai FC and Chiang Mai United. It's an interesting little stadium and just a 35-minute drive from our home in Samut Prakan. The ground has a distinctly 'lower league' feel to it, with its portakabin changing rooms squeezed in behind one of the goals, but it's not without its charm.

The low-rise main stand that runs along one side of the pitch is dominated by the space age style office building behind it. Away supporters are allocated a generous section of the uncovered stand on the opposite side, and with no running track to contend with, it's not a bad view at all! It's one of those grounds that would generate a very decent atmosphere if only Customs' home attendances were better.

I must give a shout out to the matchday catering because despite only getting a hundred or so fans at home games, the Customs staff provide a decent selection of eats, including some of the yummiest 'luk chin' (meatballs on skewers) that I've tasted at a football match. Dare I say I'm looking forward to those as much as the actual football! 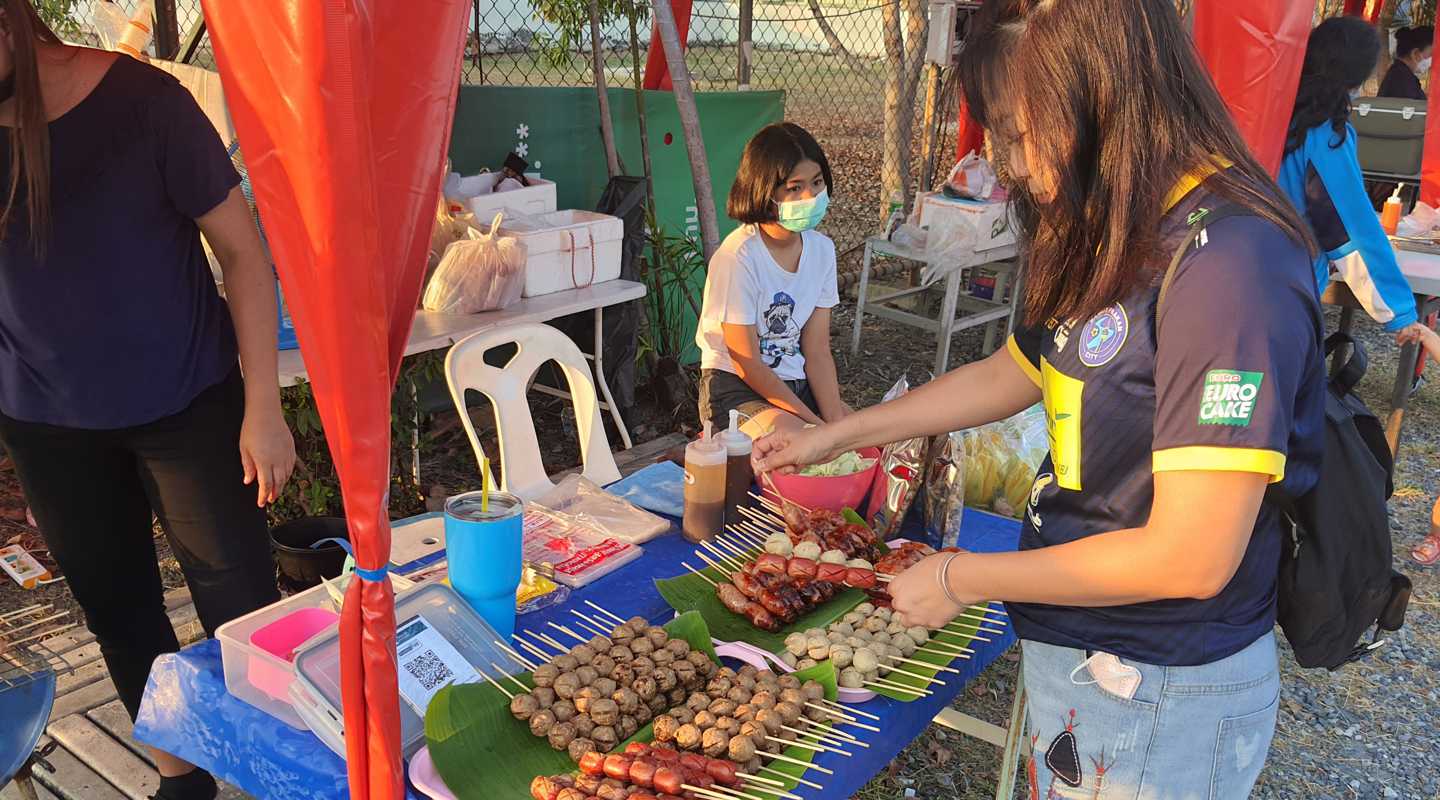 (Don't miss the meatballs if you're going to Customs United)

Customs United have been around for 25 years and hit the big time in 2007 when they won promotion to the premier league. Their stay in the top flight was short-lived however and they finished bottom of the division. A further relegation followed in 2011 and Customs found themselves in the third division Bangkok region. It then took them a long 7 years to claw their way back up to the second tier in 2018. They've since lived dangerously and flirted with relegation every season, finishing 15th, 13th and 15th, but with the help of the odd second division club closing its doors and calling it a day, Customs have somehow managed to survive.

And how about this season?

Customs United are currently in 12th position (one place above Samut Prakan) and like Samut Prakan, they are suffering from a poor run of results that has seem them pick up just 6 points from their last 9 games. I'm probably jinxing it but they strike me as being very beatable at home, in fact they've won only four of their ten games at the Latkrabang 54 Stadium. 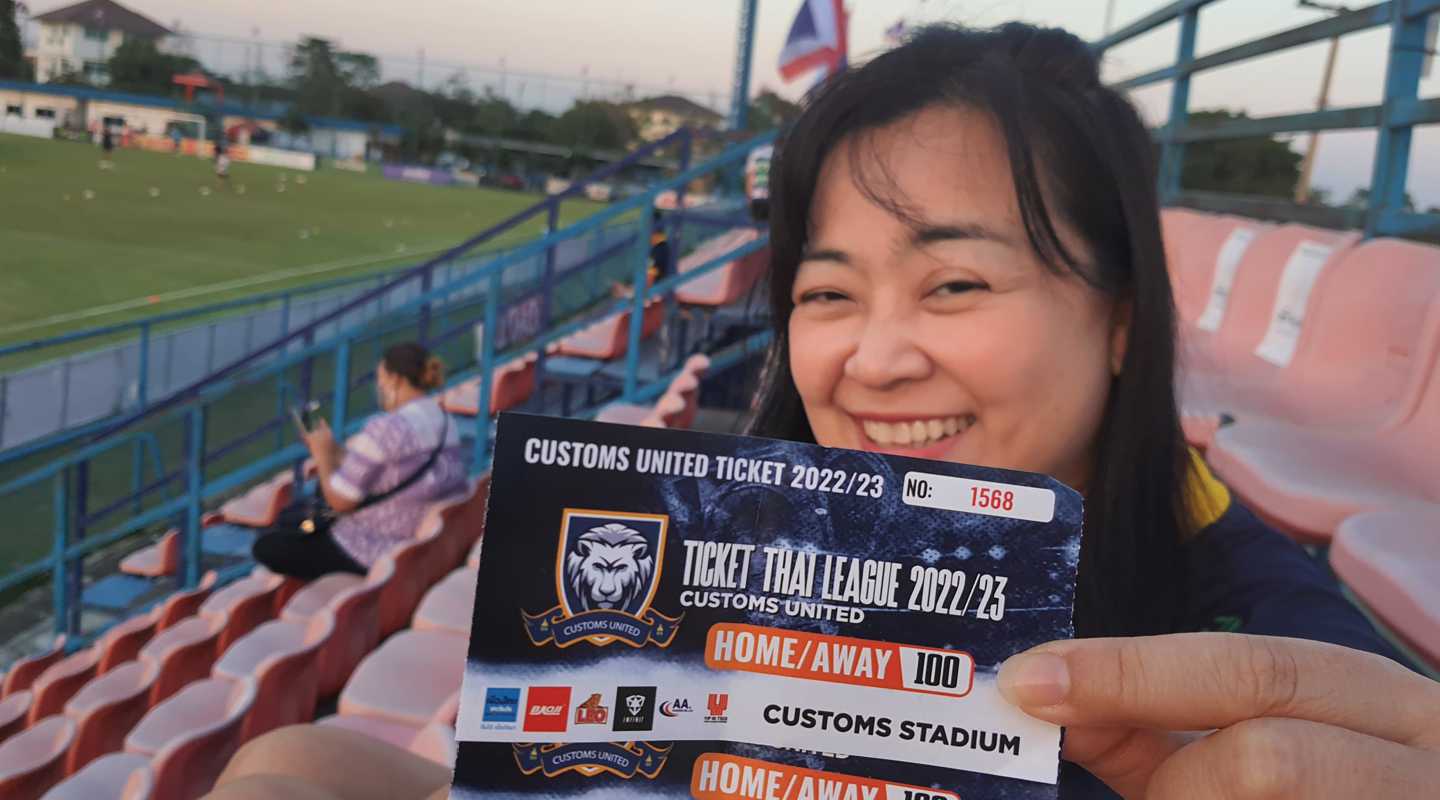 Yes, Japanese midfielder and fan favourite Daisuke Sakai was undoubtedly one of the bright spots of Samut Prakan's 2021/22 relegation season when he made almost 30 appearances and scored 4 goals. The likeable 26-year old from Nagasaki has gone on to feature in every league match for his new club and bag himself 6 goals in the process.

Samut Prakan and Customs United met in mid-September at the SAT Stadium and the visitors ran out comfortable 3-0 winners (Daisuke Sakai scored the third goal incidentally); however, it was a stage of the season when Samut Prakan were still finding their feet in the second division and undecided on their best starting eleven, whereas Customs had got off to a flying start. You could say Customs caught us at the perfect time. Somewhat thankfully, I was visiting family in England at the time so it was one of the four games I've missed so far this season.

The threat of relegation has become a genuine reality?

My heart says that Samut Prakan are far too good a team to become embroiled in a relegation scrap, but you look at that championship table and we are just five points above the drop zone, with a tough run of games to come. We desperately need three points today to give us more breathing space. No other result will do. 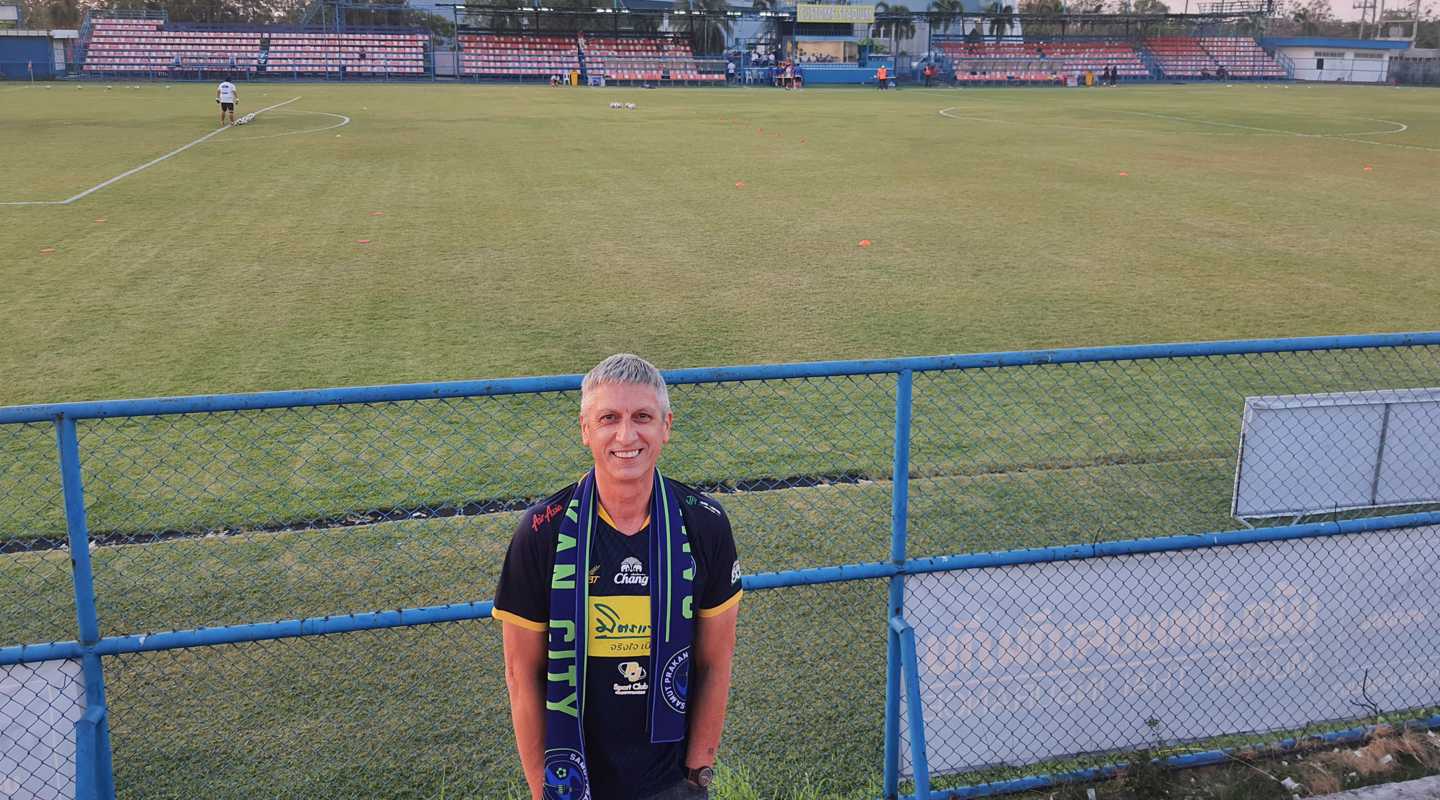 (Nice to be at Customs wearing club colours for a change)

The caretaker manager wasted no time in stamping his authority on the team line-up. African striker Toure and star midfielder Ratchata were both demoted to the subs bench. The job of leading the attack was handed to two full debutants - Kirati Keawsombut, following his move from T3 Assumption United and Sakunchai Saengthopo, on loan from Muangthong.

Before and after the game, Daisuke Sakai came over to pose for photos with the Samut Prakan masses. It's clear that he still retains a fondness for his old club, but for the 90 minutes on the pitch that respect was put aside and the Japanese midfielder was arguably the difference between the two sides. It's his goal on 19 minutes that proves to be crucial as he jinks into the penalty area, dummying a defender or two in the process and hammering the ball home from an acute angle. There's no muted celebration for this one either with the young man clearly delighted to get his name on the scoresheet so early.

It's a goal that Suppawat will have been disappointed to concede. Just five minutes earlier he had fumbled a corner in what was an extremely nervy and unassured start for the Samut Prakan shot-stopper.

For the rest of the half, Samut Prakan actually looked the better side, but for all their possession, the quality in the final third just wasn't there, with passes going astray far too often. Siraporn and Karn Jorates both get decent chances to pull their team level but see their shots sail well over and into the night sky.

Toure and Yotsakorn are thrown into the fray to bolster the attack and rescue something from the contest. Yotsakorn immediately looks the liveliest player on the pitch. It's a huge responsibility for a striker of such tender years but he has surely staked a case for being in the starting line-up from now on rather than an impact sub.

Customs almost extend their lead on the hour mark with Daisuke Sakai again the danger man. His deft pass finds Burmese striker Aung Mann, who has just the keeper to beat, but thankfully his control lets him down and Sirakorn steamrollers in to provide a timely clearance. Five minutes later, another chance for the home side as an inswinging corner sees Suppawat in no man's land and a header from a defensive team mate almost gifts Customs an own goal. Suppawat then redeems himself by keeping out a powerful downward header from Sittha Boonla, one of the many Customs players on loan from Port FC.

Ratchata is introduced with a quarter of an hour remaining but it's too late for him to have any effect on the outcome. His tame shot that flies well wide of the post in the dying seconds proves to be the last hurrah. 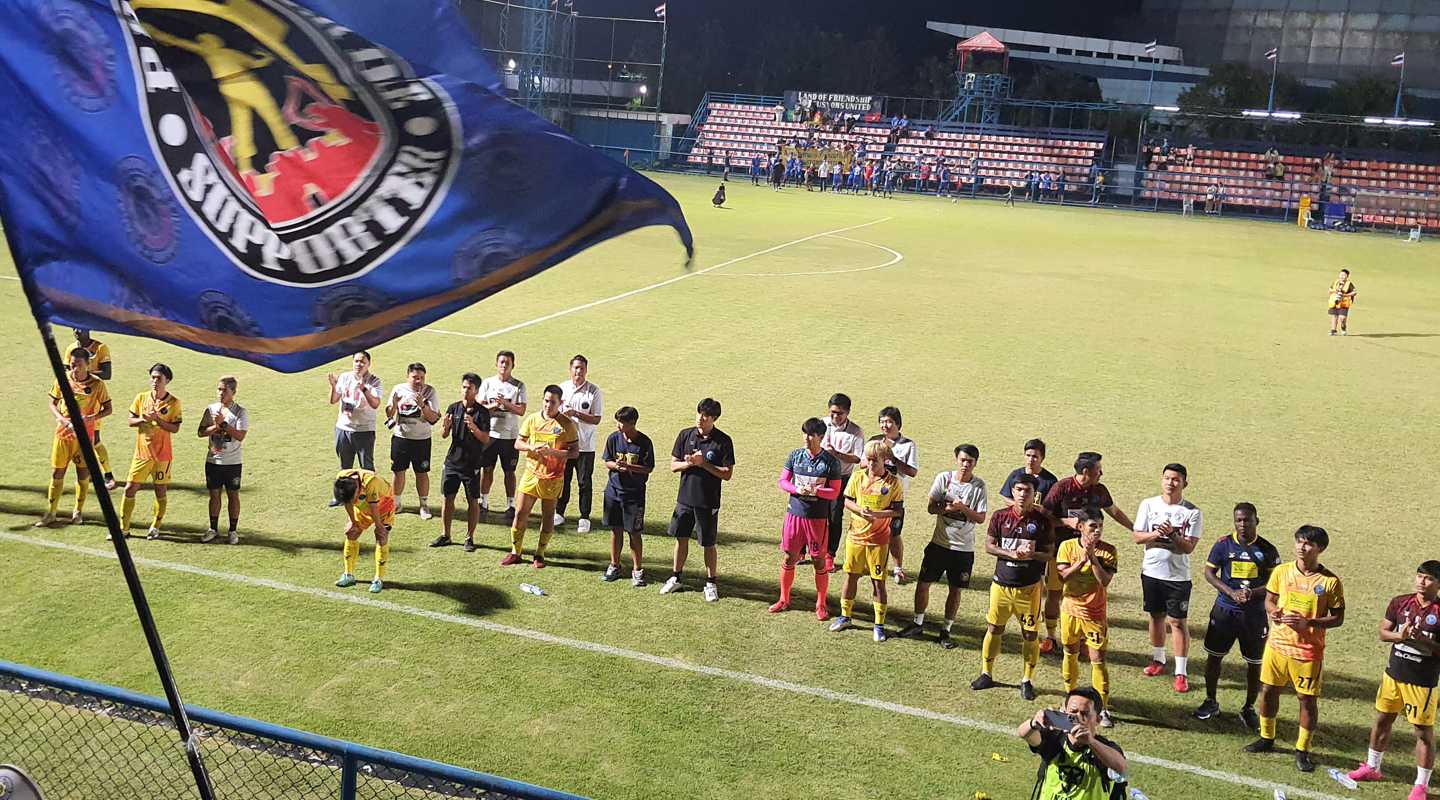 Another evening of frustration. And as I traipsed back to the car, feeling totally deflated, I reached for my phone to check the other scores in the division. Kasetsart and Krabi have both won! Samut Prakan are now just three points above the relegation zone. Before the mid-season break that gap was eight points. Whether we like it not, there is now every chance we are going to get drawn into an epic relegation dog fight. Back-to-back relegations was unthinkable at one stage. But not now.

At the end of the match, Samut Prakan owner Khun Big came over to the Samut Prakan fans, grabbed a megaphone, and assured them that he would do everything in his power to halt the slide. Khun Big is an intelligent man, a self-made, successful businessman. We have to put our faith in him but to reverse this catastrophic freefall is surely going to be one of his biggest ever challenges. I don't envy him.

The first of two away games up in northern Thailand as we take on Chiang Mai United on Saturday 4th February.

We most certainly are. With Chiang Mai United away on the Saturday and Phrae FC away the following Sunday (two cities just a three-hour drive apart) it's a wonderful opportunity for a sooper-dooper 10-day road trip...and we're taking full advantage.