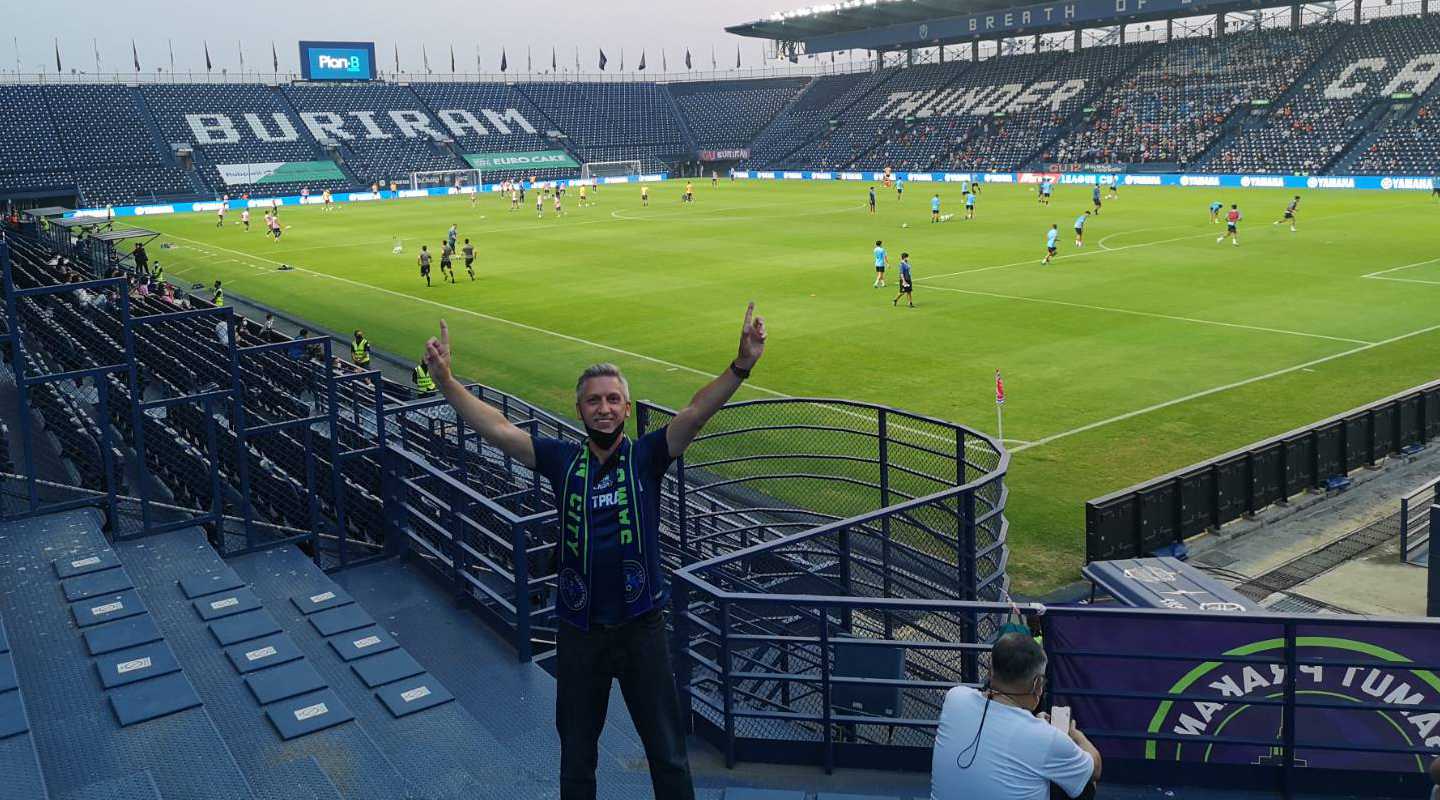 (Please God no, not Buriram away in a cup competition again!)

How loud were your groans when the FA Cup draw pitted Samut Prakan against Buriram?

Extremely loud. 64 numbered balls in a velvet bag (OK that's not the way Thais do it but you know what I mean) and we get drawn against sodding Buriram away. The absolute toughest possible draw! Why couldn't we get a nice home tie against Ghost Gate United or Assawin Khokwang or some other amateur team I've never heard of? Bloody Buriram away!

I've been thinking about an analogy with the English FA Cup to describe the task ahead and I think it's akin to Shrewsbury Town travelling to Man City. You kind of hope that Man City will field a seriously weakened side (leaving Haaland on the bench for starters) and if they don't, you pray they'll be gentle with you.

This could be a very similar situation to last season?

I fear it could be. Just as a reminder, Samut Prakan drew Buriram in the League Cup (it was only 10 months ago for chrissakes!) and because we were fighting relegation from the premier league, our then manager saw the cup competitions as an unnecessary distraction. We ended up sending a second team up there purely to fulfill the fixture and got thumped 4-1. Whether our current manager adopts the same approach remains to be seen. I guess we'll know an hour before kick off when the team is announced. That said, even our best possible starting eleven is going to have their work cut out.

But it's a chance to say hello to two much-loved Samut Prakan legends, ex-manager Ishii-san and captain Peeradol?

If that's meant to make me feel better, it doesn't.

But you're still going right?

There is definitely something slightly mad about making this journey. I've asked other Samut Prakan fans if they're going and been met with an awkward silence and a look of disbelief almost every time.

We've booked a flight up to Buriram the day before the match and three nights in a cheapish city centre hotel that I've stayed in before. Our plan is to see the game on Wednesday night, have a poke around nearby Surin the following day, and return to Bangkok by train on the Friday morning. We can afford to take things at a nice gentle pace but need to be mindful that we have another away trip on Sunday. 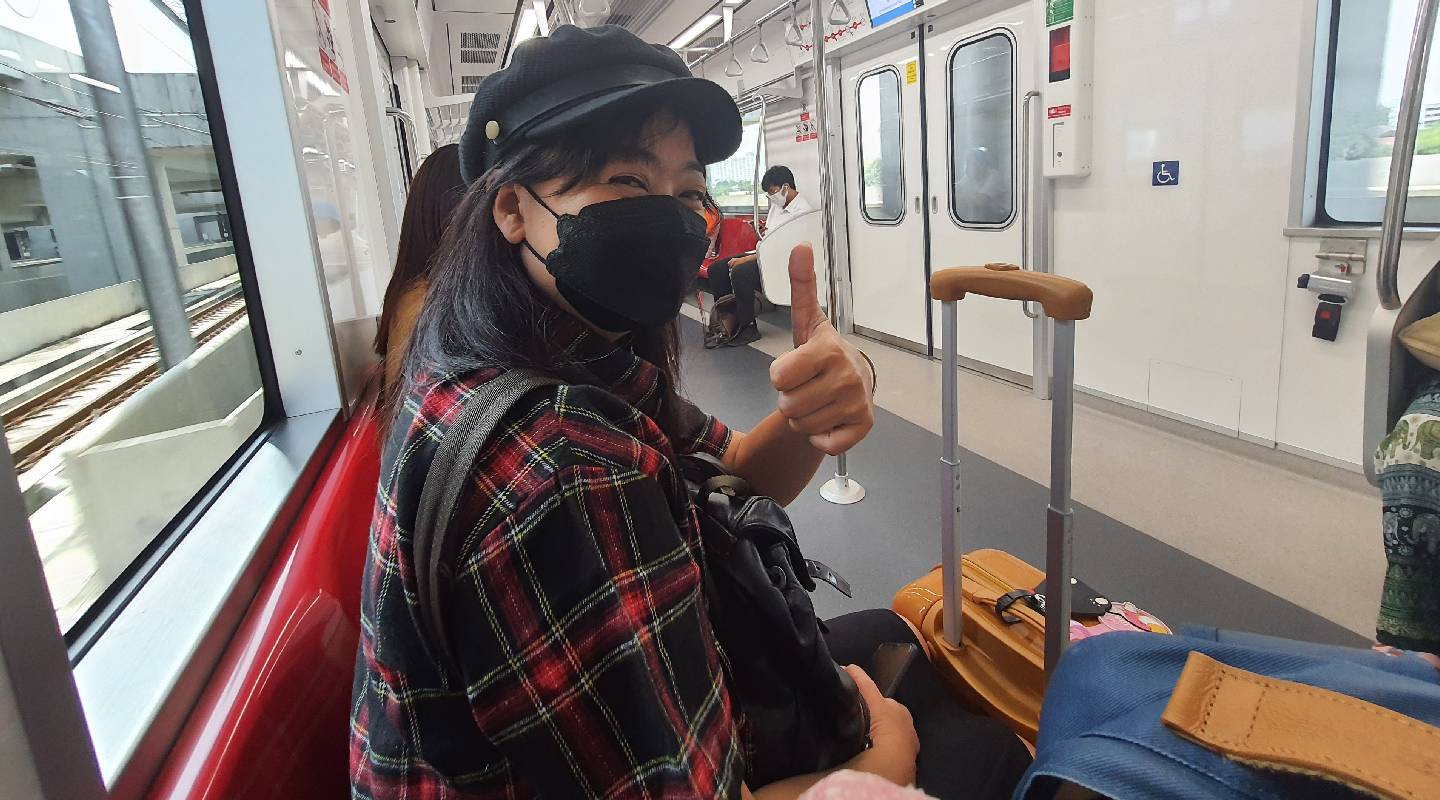 Rather than take an expensive taxi to Don Muang Airport and pay all those extortionate tollway fees, we decided to put Bangkok's mass transit system through its paces. We took the BTS skytrain to Morchit, then switched to the MRT underground for just two stops to Bang Sue Central and finally the relatively new SRT (State Railway of Thailand) red line all the way to the airport. The journey may have taken a bit longer than going by road but it was fabulous!...and the cost worked out less than half of what the taxi fare would be. 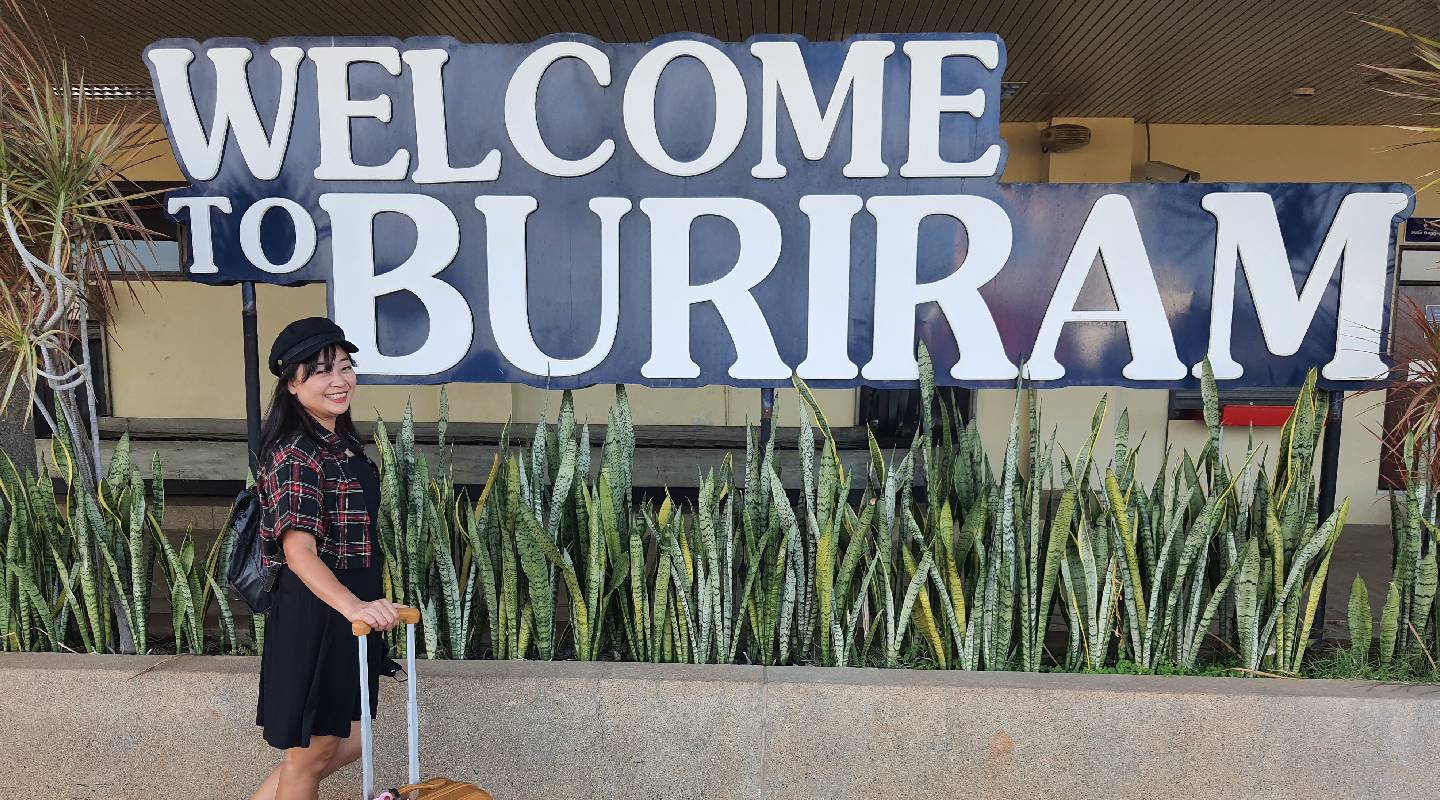 The flight to Buriram took less than an hour and at its sleepy provincial airport, which receives just two flights a day, we brushed aside the airport taxi mafia, who wanted an outrageous 600 baht to take us to the town centre (a 30-minute journey) and opted instead for a regular public shuttle bus for a much more sensible 100 baht a passenger. 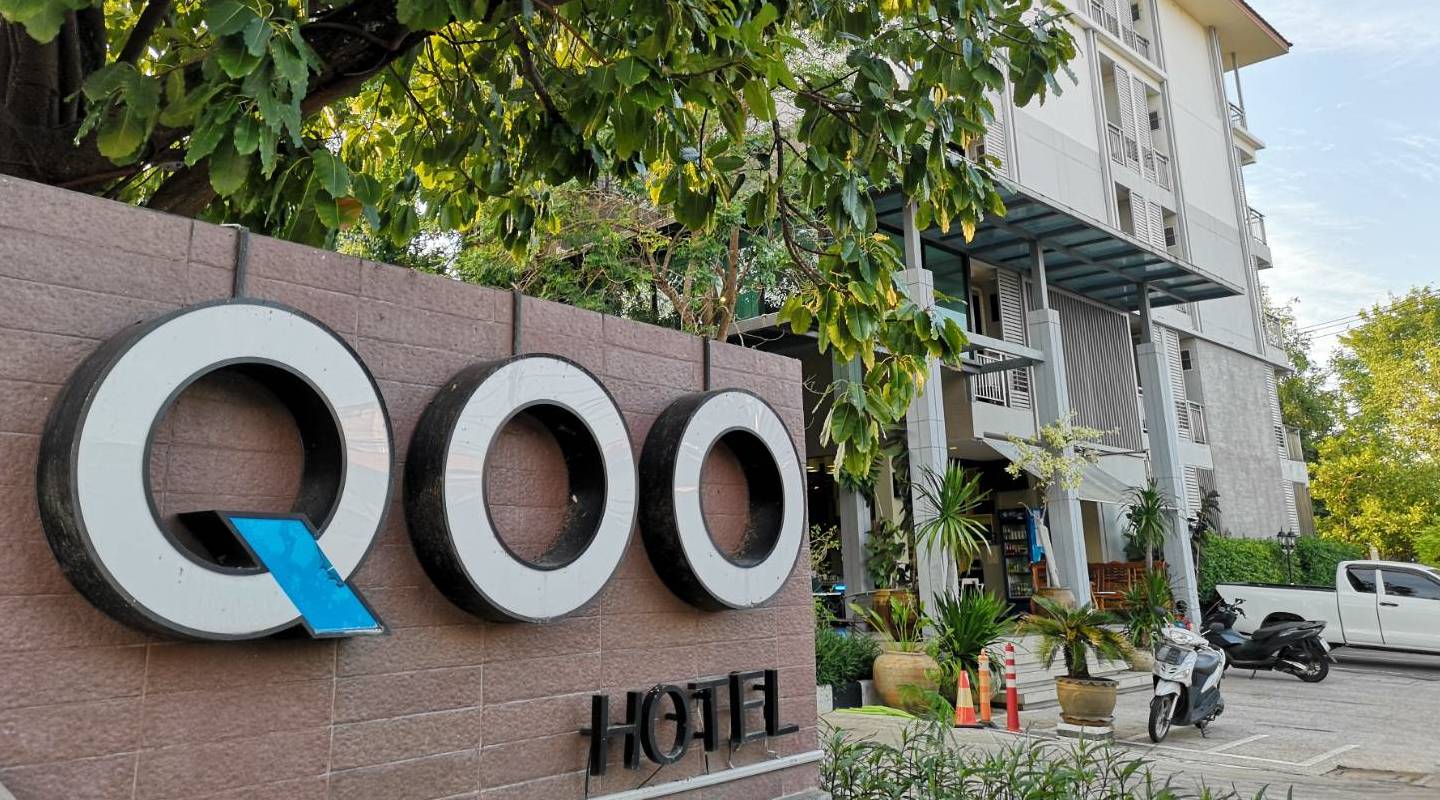 For accommodation, we went for the 3-star Qoo Hotel, which is walking distance from Buriram town centre. Actually I stayed at The Qoo Hotel a couple of years ago when I came here on my own for the very first time. It's a terrific little establishment with friendly staff and well-designed rooms that go for a bargain 650 baht a night. Along the corridors, there's a heap of vintage motorcycle memorabilia mounted on the walls. Apparently the hotel is popular with motorcycle touring clubs from this part of Thailand.

On our first evening in town, we had a bite to eat at The Bamboo Bar, a popular expat joint that offers giant TV screens, cold beer and a Western/Thai menu but wasn't really Tun's scene. Then we passed an hour at a nearby Chinese temple fair (mainly Buriram folk gorging on food) before wandering back to our hotel along the town's dimly-lit streets while keeping an eye out for any bad-tempered soi dogs.

With the match not kicking off until 7pm, we had a long day to kill and no real plan, so we lingered over a full English breakfast at Jimmy's Sports Bar, another popular expat hangout. Then desperately needing to work off some calories, we passed a couple of hours at the Khao Kradong Volcanic Park on the outskirts of town. It's a steep climb up 300 steps to Khao Kradong's main attraction, a temple on top of a hill, but worth the effort for some nice views over Buriram Province. By early afternoon, the temperature had become baking hot, so we retreated to our hotel and to the delights of an air-con room for some pre-match relaxation. 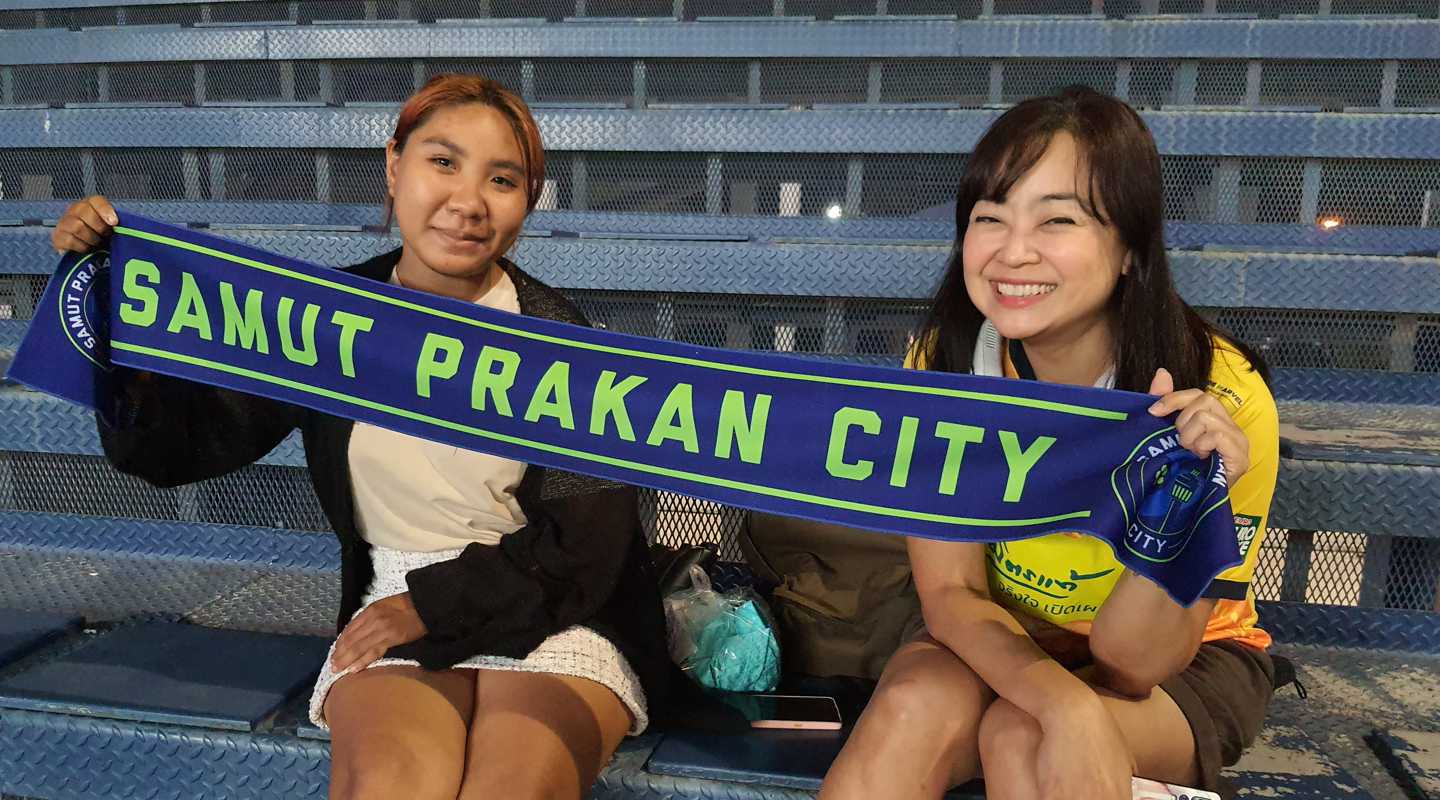 On arrival at Buriram's Chang Arena, it became apparent we were probably the only two Samut Prakan fans who had braved the trip, but we were joined just after 6 pm by Khun Petch, who had been visiting family up north and had decided to break the train journey back to Bangkok and catch the game. And so then we were three!

Frustratingly, Samut Prakan failed to announce the team line-up on the official Facebook page but by scouring social media for other team news sources, we were able to ascertain that both sides - Buriram and Samut Prakan - would be at virtually full strength, with the home side opting to give most of their bloated first team squad at least a 45-minute run out and Samut Prakan notably choosing to rest only goalkeeper Thatpicha and striker Padsakorn. 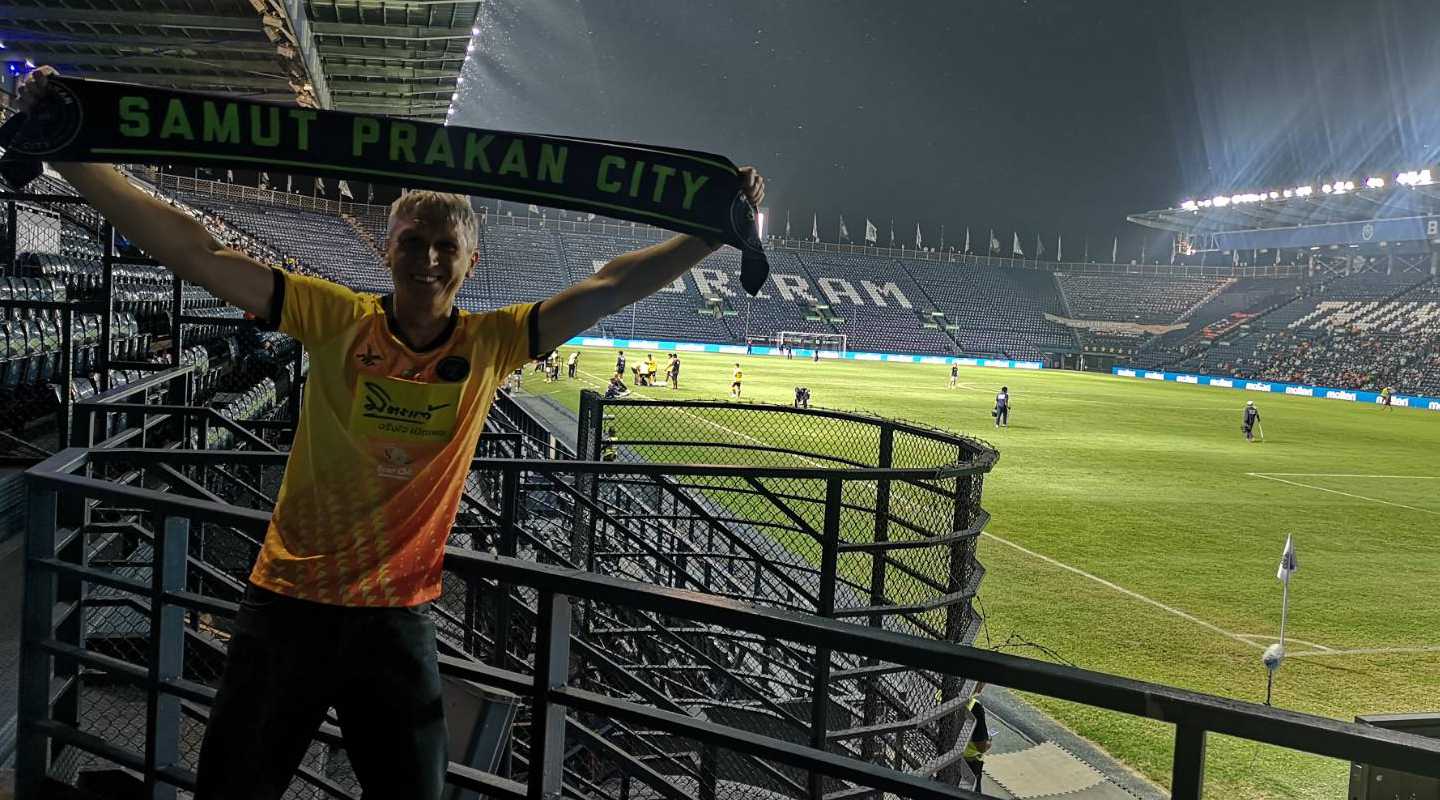 The ease with which Buriram captain Narubadin brushed aside Samut Prakan's left-back Kriangkrai and then centred for Bolingi to head home after just two minutes had Tun and I casting anxious glances at each other. This could well turn into a painfully long evening, especially with such an insignificant number of away fans to get behind our team.

Thankfully a deluge of early goals never materialised and Samut Prakan's second choice keeper Supawat dealt confidently with Buriram's strike force, mainly several long range efforts from Ayub Masika. But he was never going to keep the Kenyan striker off the scoresheet all evening and Masika's sublime strike into the top corner after 40 minutes effectively killed the contest. Samut Prakan had huffed and puffed admirably but Buriram simply looked a different class. A third goal just two minutes later, the result of a defensive error from Decha, meant that Samut Prakan were already down to the damage limitation stage, with a whole second half still to play. 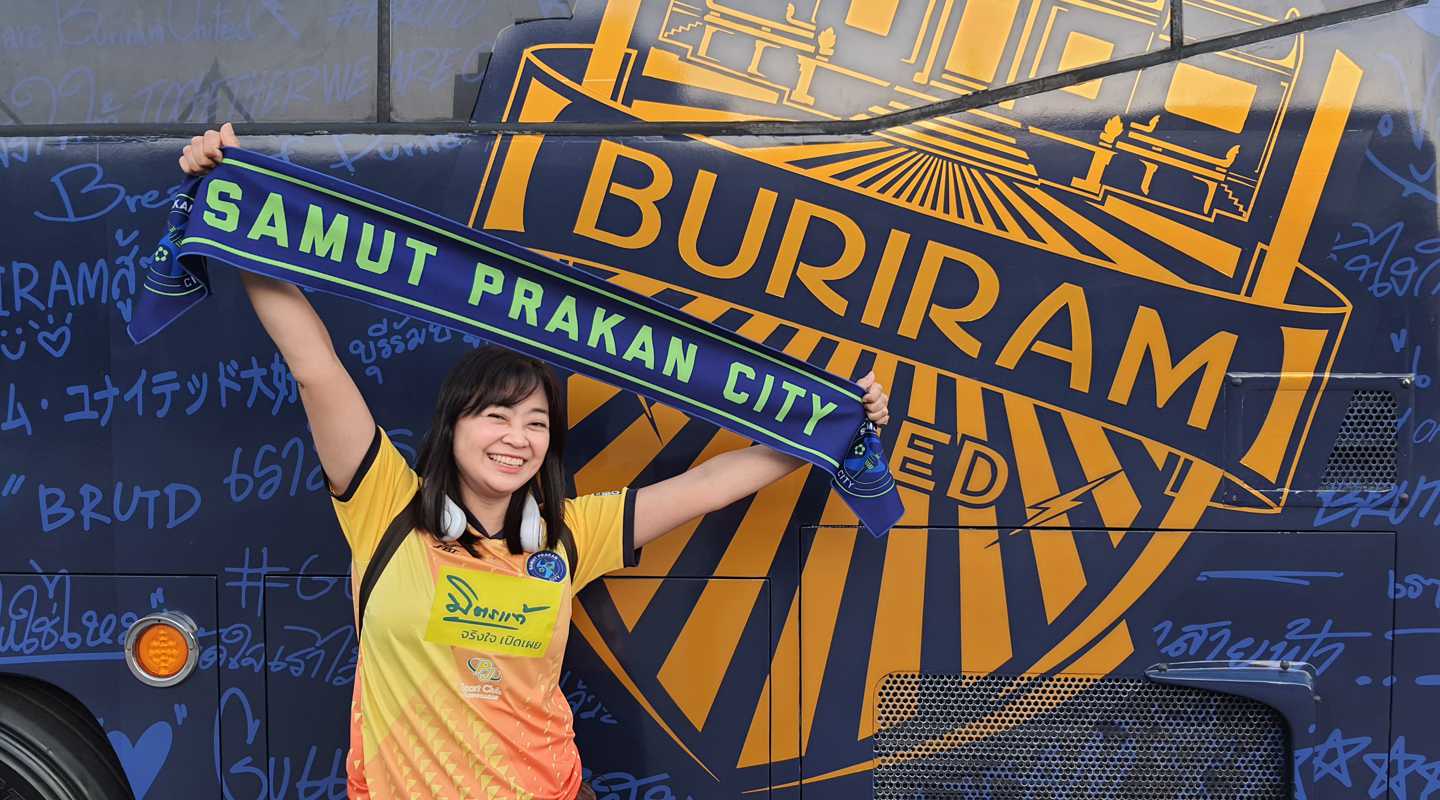 (We used to have a lovely team bus like this. It must be in the repair shop!)

I guess Samut Prakan were always going to enjoy a 'golden ten minutes' and they came at the beginning of the second period. Boy wonder Yotsakorn, still brimming with confidence after his brace against Chainat the previous weekend, was unlucky not to score with a powerful header. Kriangkrai gets in a good position, bears down on the Buriram goal but pulls his shot horribly wide. It's the hope that kills you as Buriram add a fourth on the hour mark care of Colombian winger Castaneda.

There might only be a tiny handful of away supporters but we're not going home without something to cheer. Substitute Petru Lueca does what the big Moldovan has a habit of doing and hits a long range shot that somehow squeezes under the Buriram keeper Noppon. Goalkeeper should have saved it? We don't care, we're jumping up and down and high-fiving each other as if to score just one goal had given us a moral victory. It's a funny old game.

Buriram put a bit more gloss on the final scoreline as fan favourite Sasalack bangs one in during injury time. 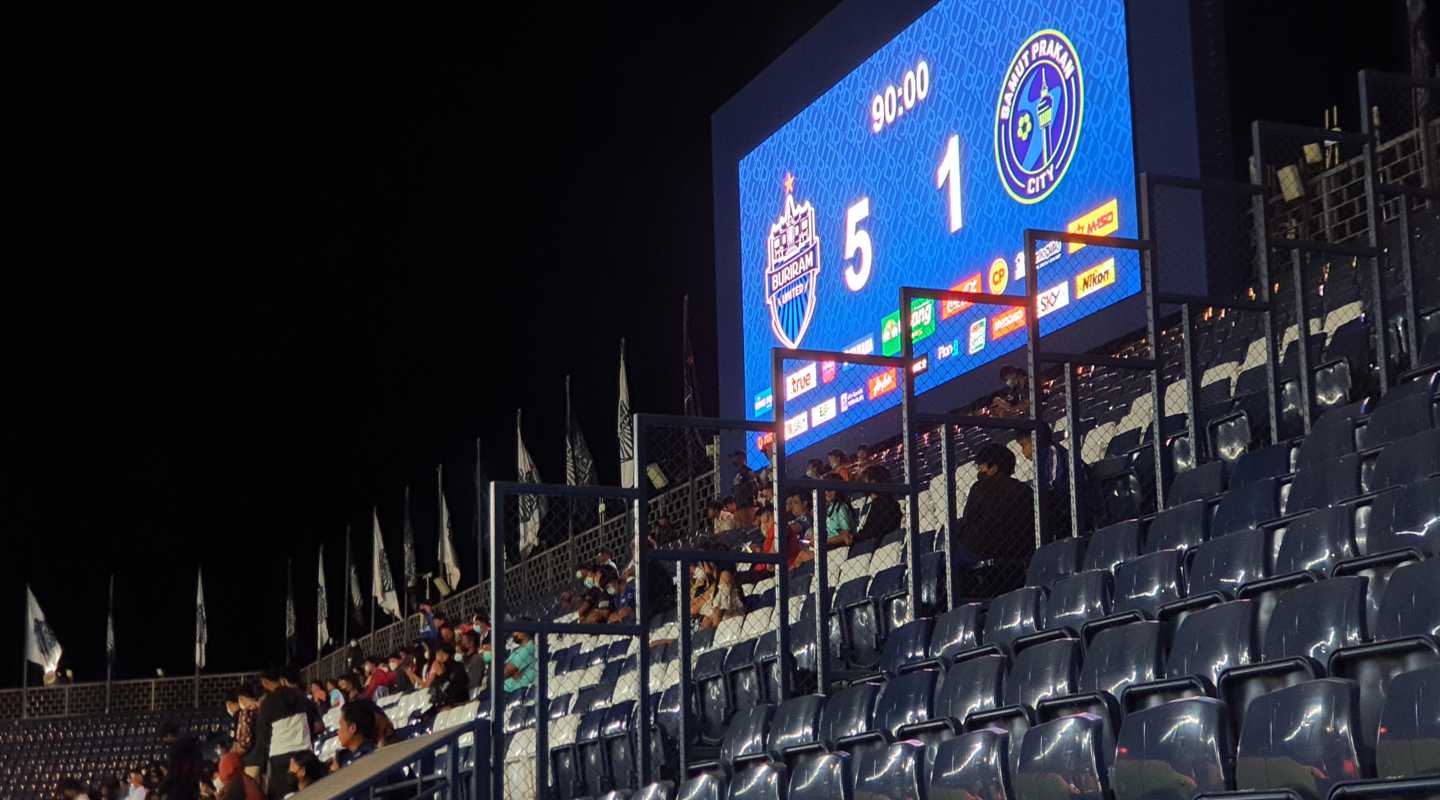 We were well beaten tonight by the best club in Thai League football and there's no shame in that. We tried our hardest and left nothing out there on the pitch but the gap in quality was too often insurmountable. That sounds hard on the Samut Prakan team but every player could climb aboard that team bus with their heads held high. Ten out of ten for effort from this Samut Prakan supporter and don't worry lads, we won't be playing a team of Buriram's quality again for a while.

Whilst we're on the topic of team buses, Tun and I waited on the stadium concourse to give the Samut Prakan players a final cheer and some encouragement as they made their way from the players lounge to the team coach. Petra Lueca gestured to me to meet him at the end of the barriers, where he signed his match shirt (his goal-scoring match shirt I might add) and presented it to me as a thank you for travelling and supporting the team. You can just imagine what that meant to a fan. It made the evening all worthwhile and somehow the final scoreline and an early FA Cup cup exit didn't matter any more. 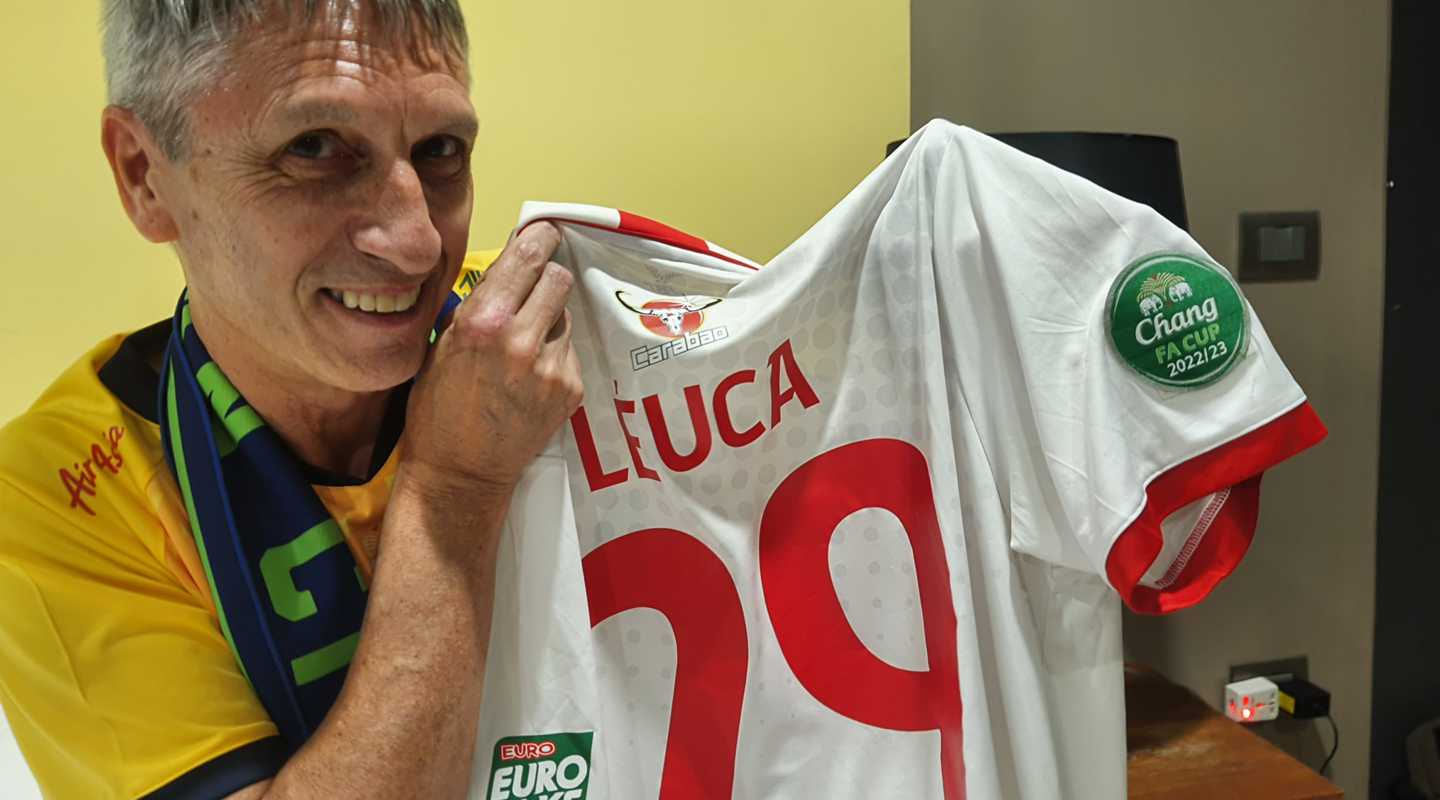 A final day up north

Rather than return to Samut Prakan the following day, Tun and I decided to put our tourist caps on and extend the trip a little. It seemed a shame not to have a mooch around Surin, a town neither of us had been to and only an hour away from Buriram. We ending up having a wonderful day! 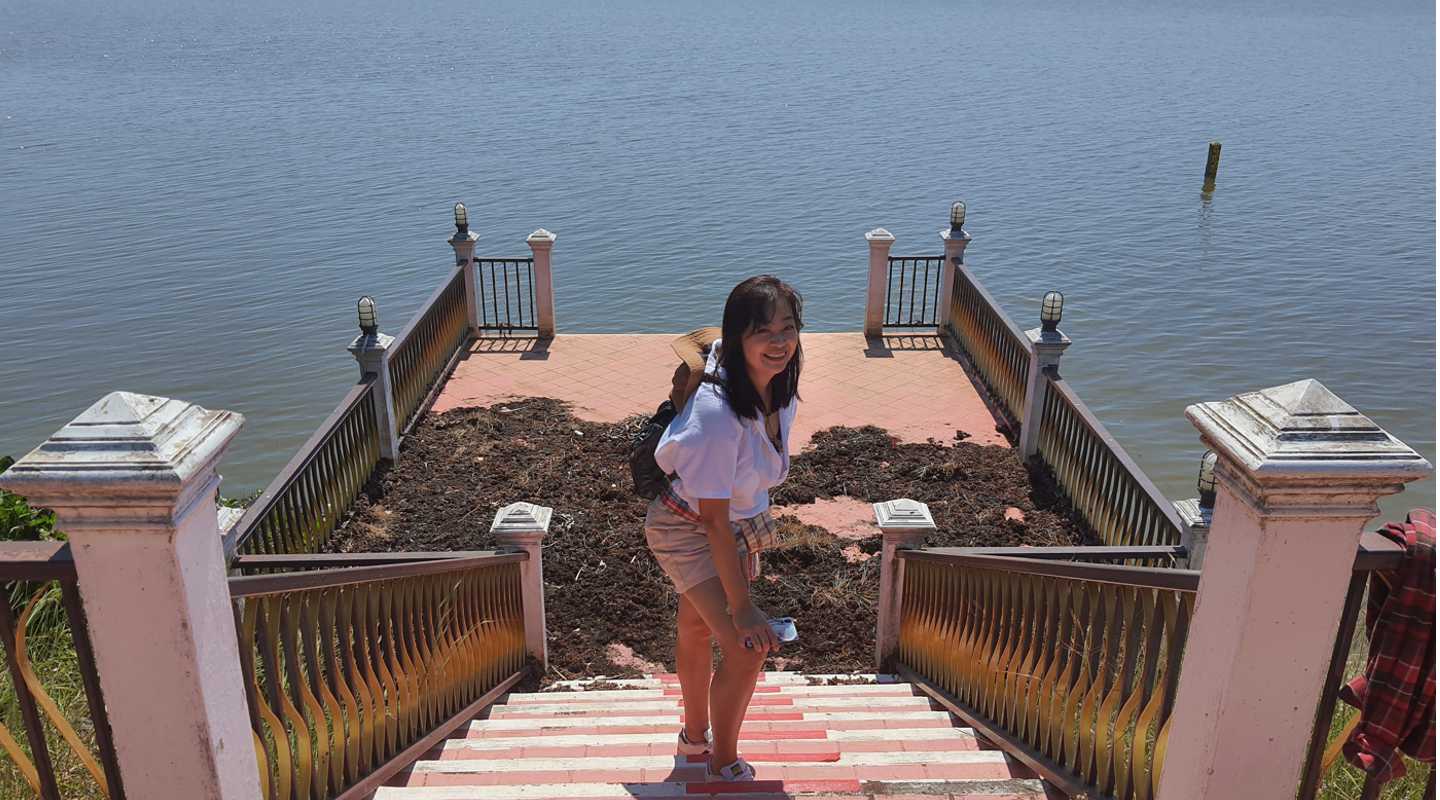 We caught the local train to Surin, hired a tuk-tuk driver at the station and he whizzed us around the town's main attractions, which included the splendid Surin National Museum (a must if you're into your Khmer culture), the city pillar shrine and a peaceful lake on the outskirts of town. He even made a pit stop at Surin City FC's stadium so a certain Thai stadia aficionado could tick another box. 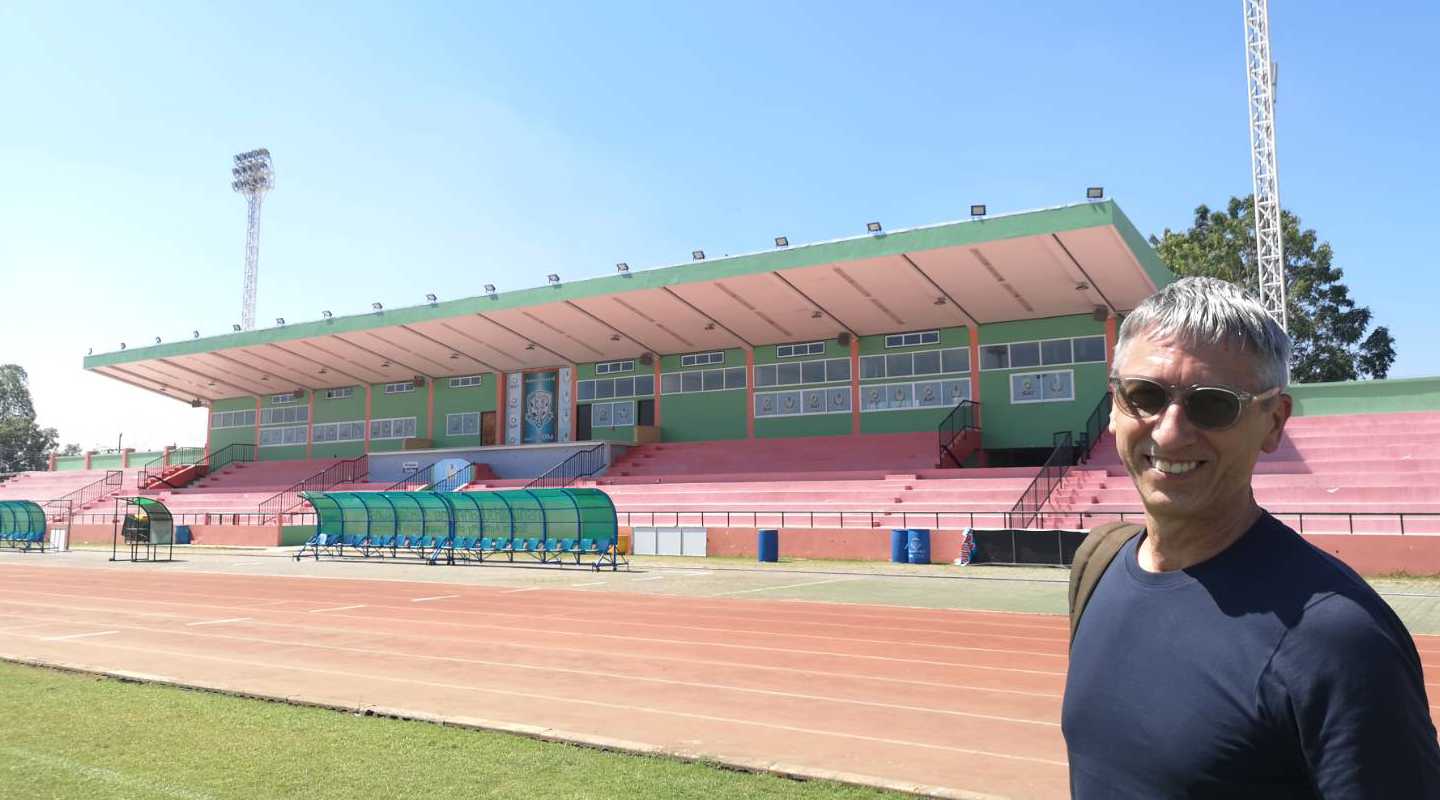 (With a bit of luck Samut Prakan won't ever have to play here unless it's in a cup competition...or Surin win promotion from the third division)

In the afternoon, we rode another local train to the sleepy town of Sikhoraprum to have a late lunch and wander around some Khmer palace ruins.

All in all, another very enjoyable football away trip. 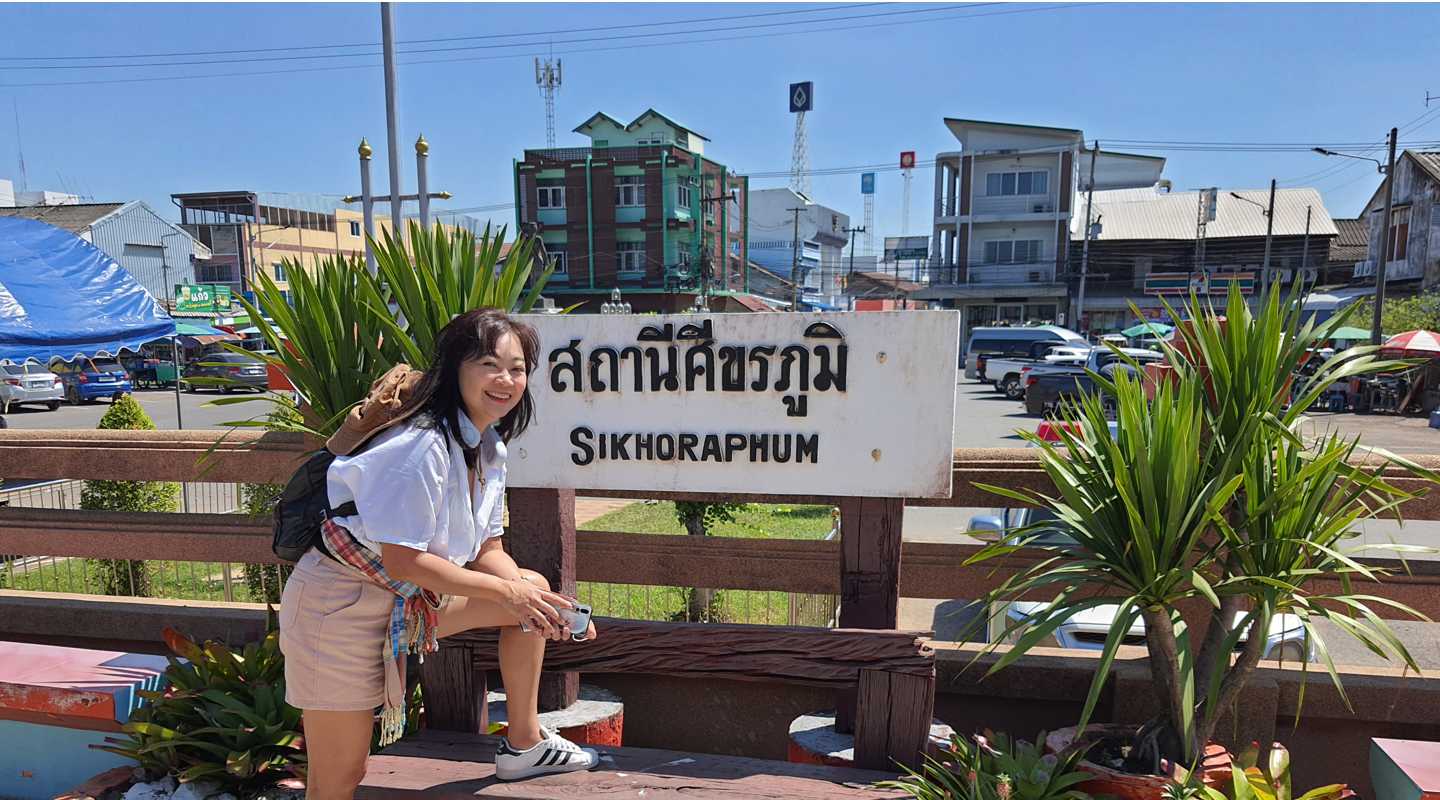 We travel the hour and a half by road to the old capital - yes, it's league leaders Ayuthaya United away on Sunday 6th November.