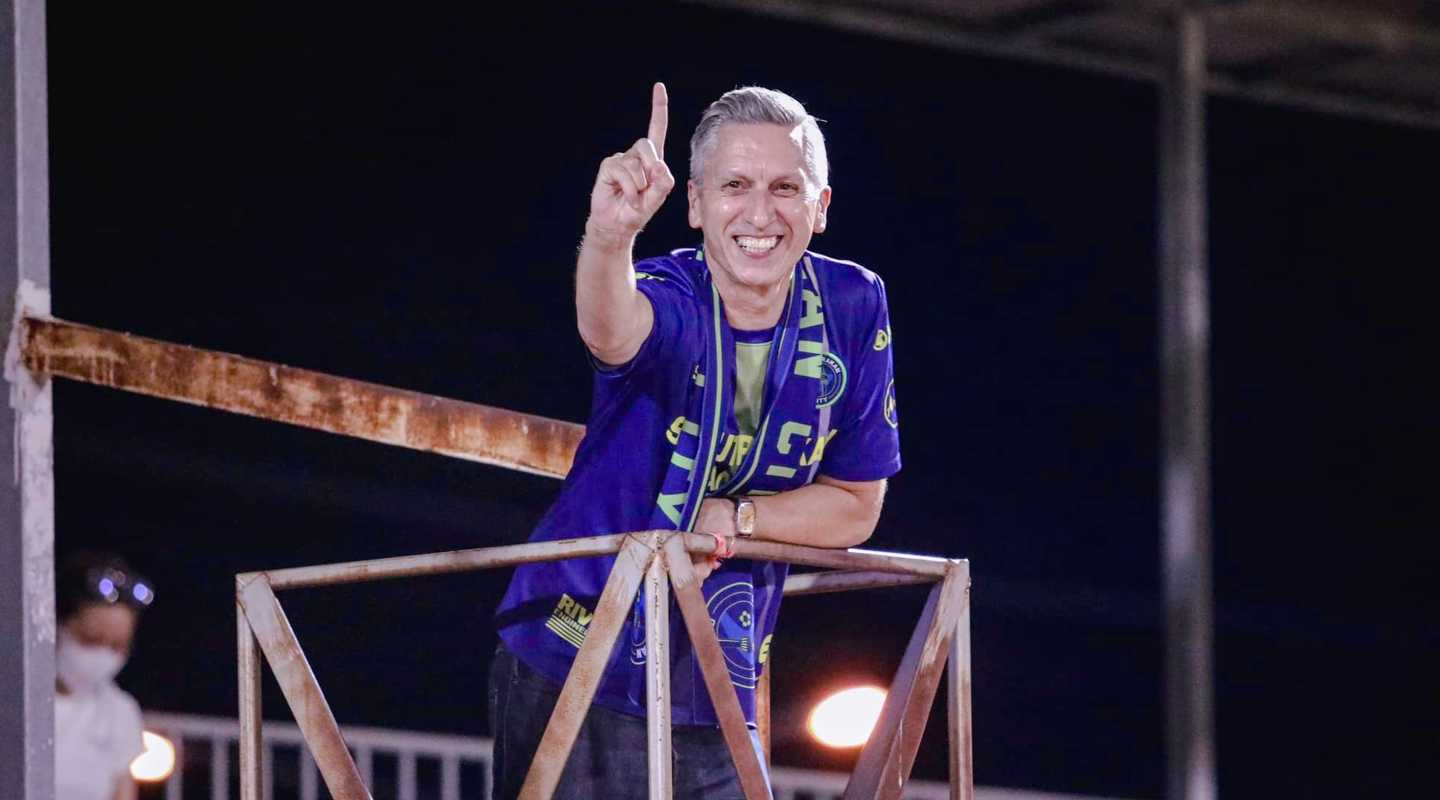 (Just one more game to play - and a win tonight is maybe all we need. Photo: Paiboon James)

So what's needed for Samut Prakan to survive and stay in the Premier League?

Let's start with the bottom of the table. Suphanburi's 5-2 defeat at Bangkok United on Sunday finally condemned them to the second tier after being the great escapists of recent seasons.

So it's either Samut Prakan or PT Prachuap for that third relegation place. It's as simple as that.

Samut Prakan have the better goal difference so will survive if both teams finish on 31 points.

Samut Prakan need to win. No other result will do.

We also need PT Prachuap to lose at Muangthong United. If PT Prachuap get a win or a draw, they survive and Samut Prakan are relegated, regardless of the result at the Samut Prakan Stadium.

This is the classic last day relegation scenario isn't it?

It's going to be like when Match of The Day flicks between several games and fans are not only engrossed in the match they are watching, but glued to smartphones to keep tabs of results elsewhere. It promises to be quite an evening.

Let's not forget that both Muangthong United and Chiang Rai are looking for a top four finish so there's no way they are going to be downing tools this evening.

The club announced that all tickets will be sold online at half-price, so the cheapest tickets behind the goals (in the uncovered stands) will go for just 50 baht. May 4th is also a public holiday. Surely we're looking at a four-figure attendance for this one!

How has this fixture gone in recent seasons?

To be honest, I see this game as a one-off, almost like a cup final. I'm not reading too much into past results. But for the record, the two sides have met twice at the SAT Stadium. In 2019 (Samut Prakan's first season) Chiang Rai caught us in the middle of a bad run and went home easy 3-0 winners. In February 2020, Samut Prakan v Chiang Rai kicked off the new Thai League season and it ended in a hard fought 1-1 draw. 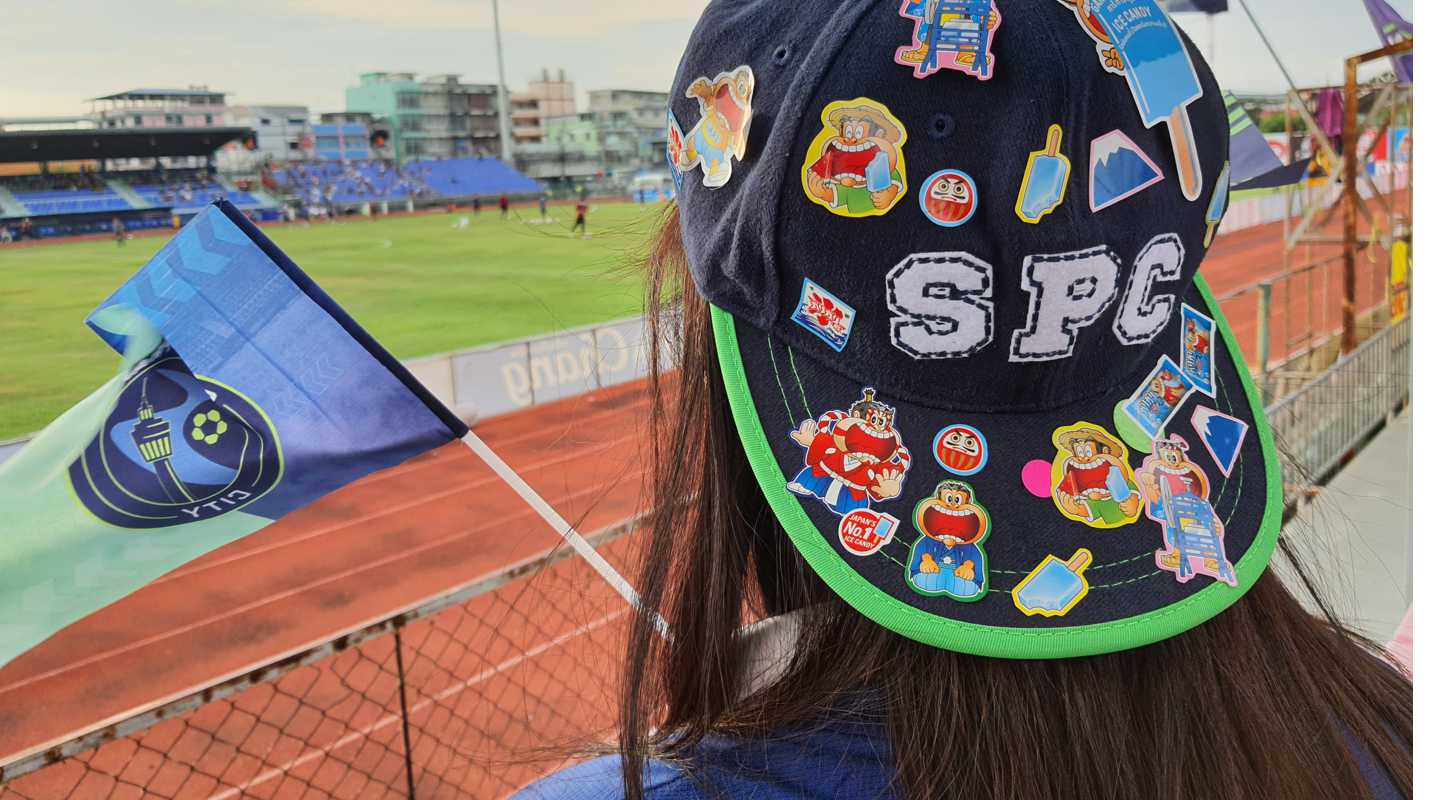 Let's get to the match itself?

Now this felt more like the days of old. Tun and I arrived at the ground 90 minutes before kick off and there was already a good buzz around the place. The club was even giving out miniature flags for fans to wave during the match, which I thought was a nice gesture.

I said hello to a number of supporters I hadn't seen at a game for a long while. It seemed like everyone had turned out for this one. In fact, the final attendance of 1,961 was well over double what the club had experienced in recent months. Perhaps that should be the marketing strategy going forward? - halve the price of tickets and more than double the attendance!

The problem with having to beat a team like Chiang Rai on the final day is that they are a very decent side. The league table doesn't lie; they are top five for a reason. Brazilian striker Getterson almost puts the visitors in front after just two minutes but Pathiwat manages to backpedal and tip the deflected shot over the bar. Chiang Rai settle into the contest and have clearly done their homework, allowing the likes of Jaroensak little time on the ball.

The Beetles go on to stun the boisterous home crowd by grabbing the lead mid-way through the half. Getterson swings in a free kick from the left, which evades every player in the penalty area and finds the bottom corner. An awful goal to concede at any time let alone in a match of this importance. Now it's time for Chiang Rai's impressive travelling support to make themselves heard.

Samut Prakan respond well but Sarayut Somphim plants his firm header straight at the Chiang Rai keeper. At the opposite end, the visitors almost go two up as Siroch sees his long range shot palmed awkwardly to safety. Daisuke Sakai 'scores' for Samut Prakan with five minutes remaining but is clearly the proverbial mile offside. We have 45 minutes to save our season.

In the other game, Muangthong United are doing their bit by leading 1-0 against PT Prachuap at the interval. But it's all academic if Samut Prakan can't find a win themselves.

Samut Prakan shuffle the pack, bringing on Setthawut and Chaiyawat Buran as Kittipong and Daisuke receive the crooked finger. I would have played Chaiyawat from the start. This game was crying out for an attacking defender of his tenacious nature.

Yuto Ono fizzes a free kick past the upright as the hosts desperately try and find a way back. Another Samut Prakan free kick, this time from Jaroensak, produces an acrobatic save from Saranon. Elsewhere, PT Prachuap have levelled the score against Muangthong. It's all going rather Pete Tong.

Kevin Ingreso, another second half replacement, spurns a great chance on 77 minutes but the on-loan midfielder from BG Pathum sees his powerful shot cannon off the post. News filters through that once more Muangthong have taken the lead at the SCG Stadium, alas Samut Prakan's time is running out.

We go into four minutes of injury time. Jarifovic nods the ball into the path of Samuel Rosa but the Brazilian striker fails to connect and misses a sitter. In the words of Kenneth Wolstenhome - "they think it's all over, it is now" as Chiang Rai's Akarawin Sawasdee, an 84th minute sub, beats Pathiwat with a smart strike from the edge of the box and puts Samut Prakan well and truly down to the second division.

Captain Chayawat makes the score a tad more respectable with the last kick of the game but it's all too little, too late. The referee makes a last check of his watch and puts us out of our misery. 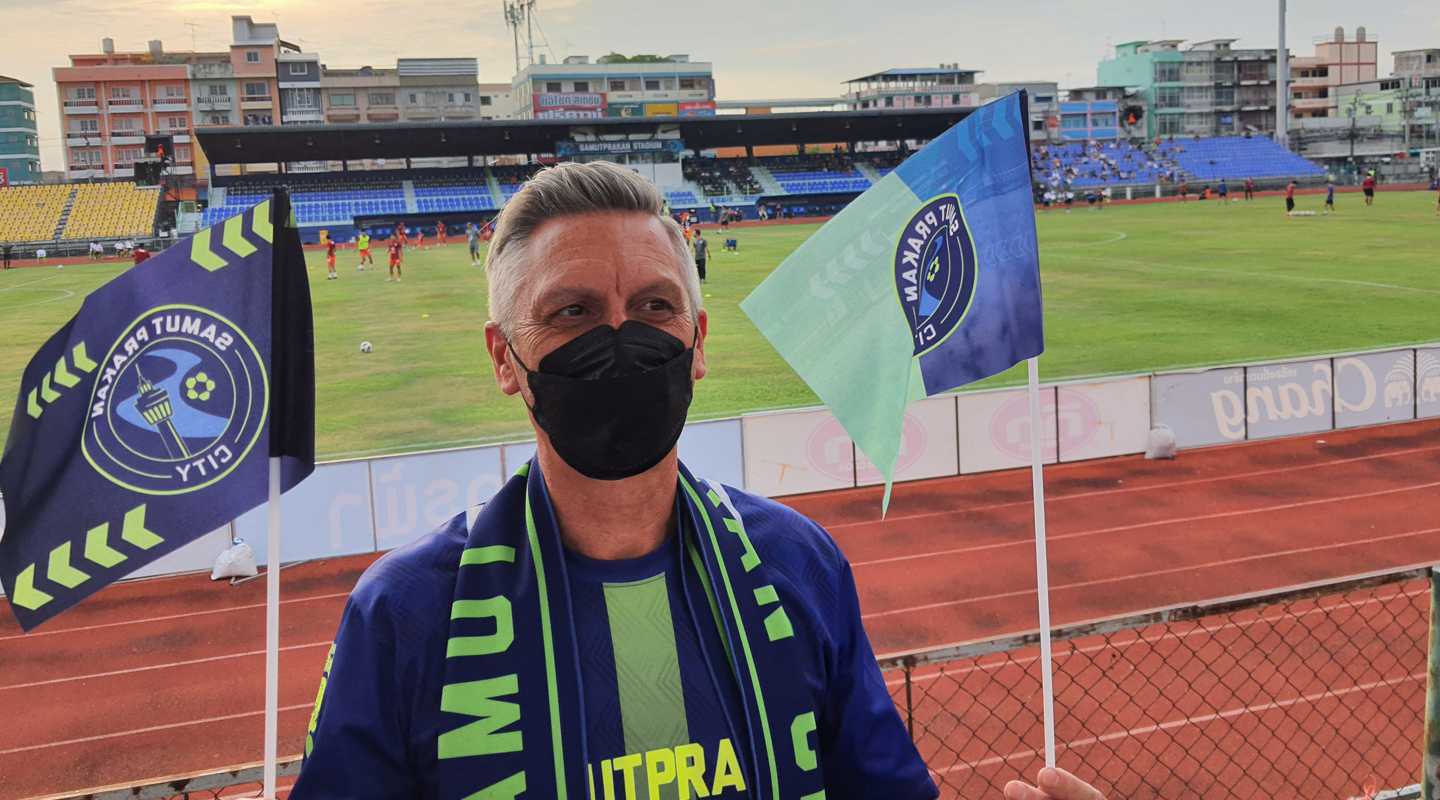 (In confident mood. That was before the game of course)

It was brilliant to see the team take their survival chances to the very last game of the season. We came up short tonight but ultimately you're judged on how you perform over a 30-match league campaign...and we just haven't been good enough.

After the final whistle, when the players and backroom staff came over to applaud the fans, Aris Jarifovic made a beeline to both myself and Sheffield Jon standing next to me. We bumped fists and Aris thanked us for our loyal support. But there was no disguising that this was a final goodbye and it was a sad and moving moment. No one likes saying farewell to old friends but Aris won't be the only familiar and much-loved face heading for the exit door.

At the very beginning of the season, when Samut Prakan let half a dozen of their best players go, you might say the writing was on the wall. We became many experts' prediction for the drop, even at that early stage. My good friend and fanatical Thai football fan Dale Farrington said to me "my biggest worry would be if the Samut Prakan owner has the stomach for at least a season in the second division" Dale's words were ringing in my ears on the drive home. I guess we're about to find out aren't we?

Samut Prakan City are at a crucial crossroads in their short history and the next three months (before the new season starts in August) are sure to be tortuous ones for their followers as the various Thai football websites feed us with an almost daily diet of gossip and rumour. Will the owner carry on or sell the club? Will the club fold and go out of existence? Which players will leave? Can we assemble a squad that's good enough to get us back into the big time? No one has the answers to these questions right now.

Give me a poke on the day before the new season starts. I'll be hiding behind the sofa. 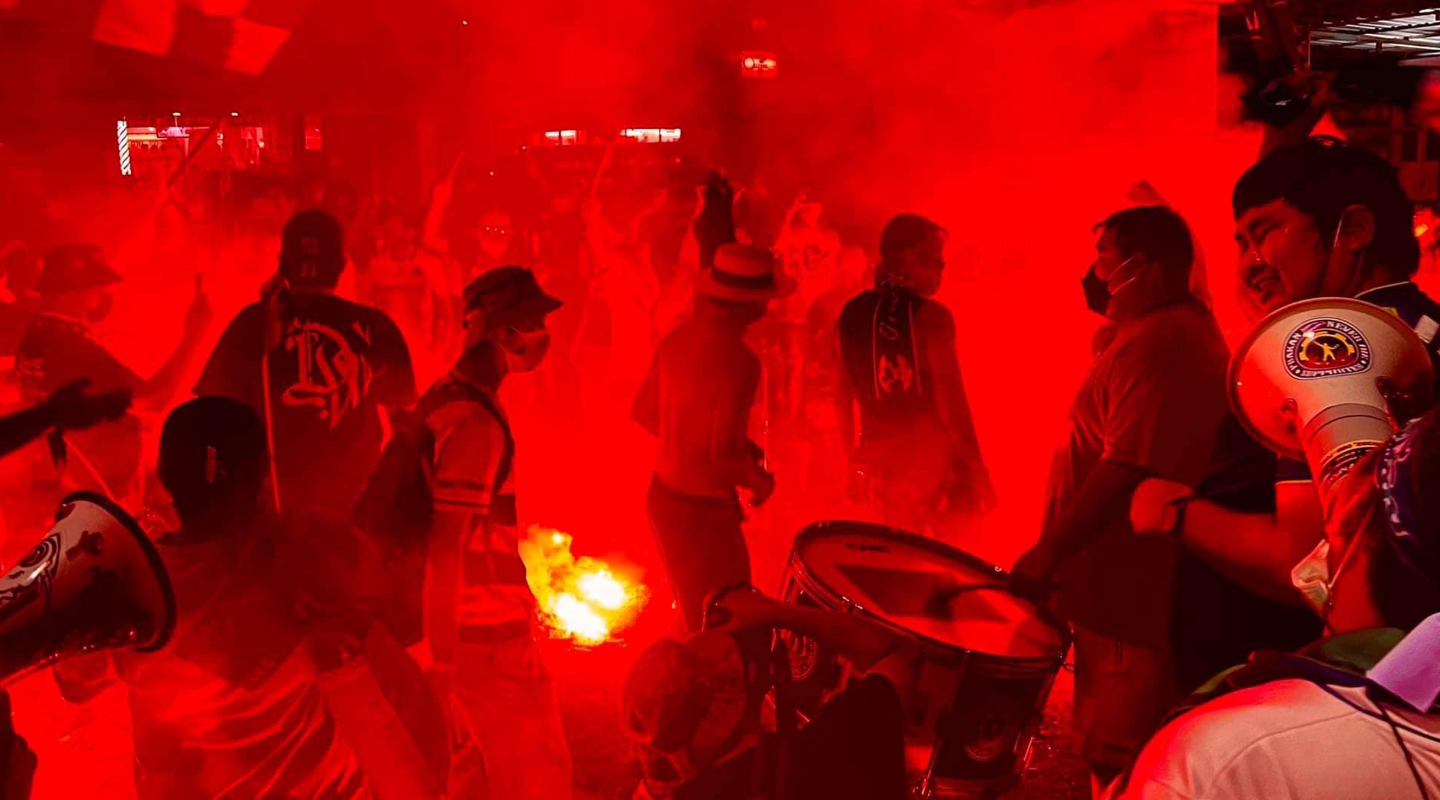 (Even though we were relegated, the fans were determined to party afterwards)