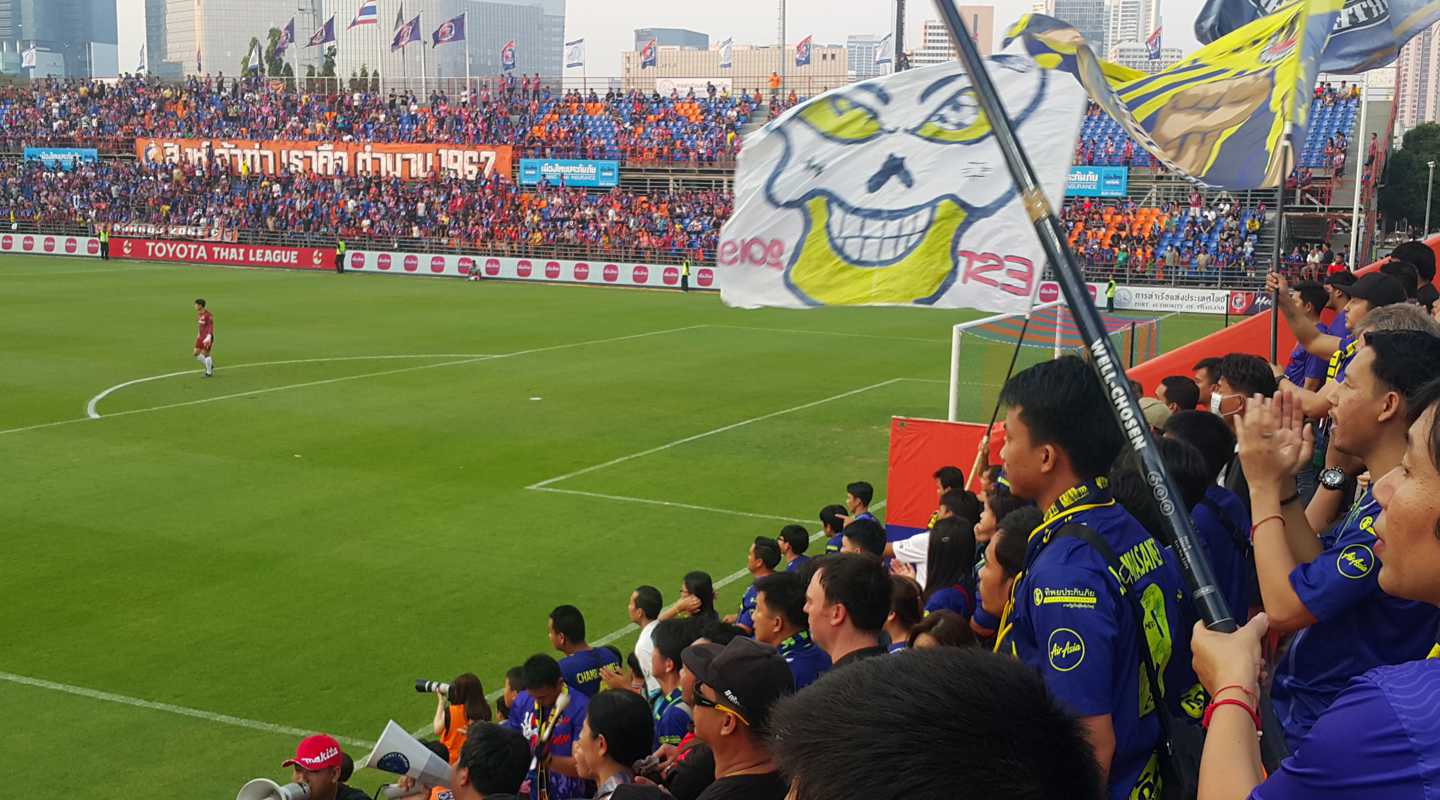 (This will be my third visit to Port's PAT Stadium. As you would expect with it being such an easy journey from Samut Prakan, we normally take a sizeable away following...but I'm not sure if that'll be the case this time. Perhaps a number of supporters are already suffering from a case of the relegation blues. But we soldier on.)

PT Prachuap kicked things off on Friday evening with a feisty 2-1 home win against bottom club Chiang Mai United. Nothing less than a win would do for the Chiang Mai White Elephants if they were going to keep their slim hopes of survival alive, but alas it wasn't to be. Now 12 points adrift of safety with just 7 matches to play, they look well and truly doomed.

Meanwhile, Samut Prakan are away at mid-table Port FC while Suphanburi travel to third place BG Pathum (both matches on Sunday)

What's our record like against Port on their patch?

The teams have met twice in the premier league at the PAT Stadium. Last season, in what was Samut Prakan's first away match of the campaign, we were well beaten 4-1 The year before, it was a rather meaningless end-of-season game as Port rested players for their upcoming FA Cup final appearance and Samut Prakan were guaranteed a 6th place league finish. The match ended all square at 2-2.

What kind of season are Port having?

A very mediocre one by their standards with plenty of moaning and groaning coming from their supporters on social media. The manager also resigned this week from one of the hottest hot-seats in Thai football and what fans refer to as 'the Port managerial merry-go-round'

Port currently lie in 8th place having won just 9 of their 22 games this season. Three teams have left the PAT Stadium with maximum points - Buriram, Chonburi and more recently Chiang Mai United with a shock 2-1 victory.

So there's some hope there?

Well, we're talking about a Samut Prakan team that hasn't scored a goal in their last five league outings. That's a staggering 450-plus minutes of football. I don't expect us to win or even grab a point from this fixture but just give us a goal to cheer. That would be nice.

Let's dwell on the very probable prospect of relegation for a moment...

I think there are three possible scenarios if we do find ourselves in the second division. We could 'do a Trat FC' and bounce straight back at the first attempt. Or we could 'do a Chiang Mai FC' and become a second tier mid-table side (wouldn't that be horrible). The third scenario is one we don't even like to talk about because it's just too heartbreaking to contemplate...that the club calls it a day and folds, the owner deciding that constantly throwing money at the club is no longer viable. I'm not saying it will come to this but sometimes it's difficult to block out the rumours, and there are plenty of those flying around. One thing I've learned from following Thai football is very often where there's smoke, there's fire.

I suppose you could add a fourth scenario - that anything can happen in Thai football!

As a footnote, an article appeared in the Thai football media on Friday, put out by Samut Prakan City FC. Basically it acknowledged that the threat of relegation is a very real one but it went on to state that the mood inside the camp remains upbeat, that the players will give their all in the remaining games, and most importantly, that the owner has no intention whatsoever of closing down the club should they be relegated. I guess time will tell. 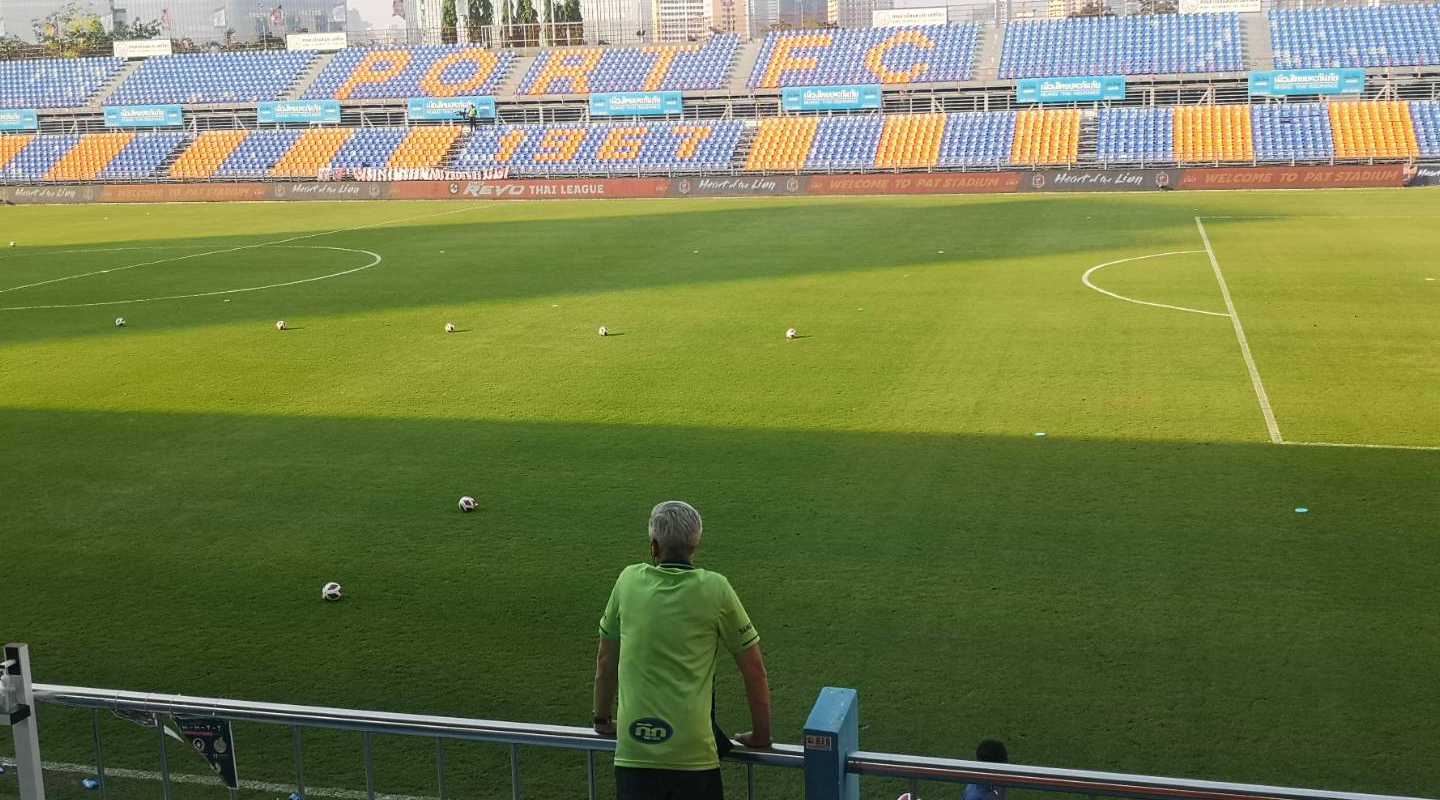 (Reflecting on how tonight's game is going to pan out)

Tun and I arrived at the PAT Stadium with plenty of time to spare. We found a handy parking spot next to the away end and our plan was to have something to eat and drink in the Port fan zone. Those plans were soon dashed by the ridiculously heavy-handed stadium security who told us we were not allowed access to that area as they didn't want the two sets of fans coming together. I couldn't believe what I was hearing. As if a handful of Samut Prakan supporters were going to make trouble with some of the friendliest fans in the premier league? Ridiculous!

I'm going to get this off my chest and then forget about it for another season at least. The PAT Stadium offers one of the best matchday experiences in the Thai football league in terms of view and atmosphere...but it is completely let down by the uniformed jobsworths who bark orders at you and apply petty rules at every turn. What's more, the Port fans I spoke to on social media after the game, totally agree. In fact one hardcore fan doesn't go to games anymore for that very reason.

OK, let's move on to the match because it was about to become a very special evening. 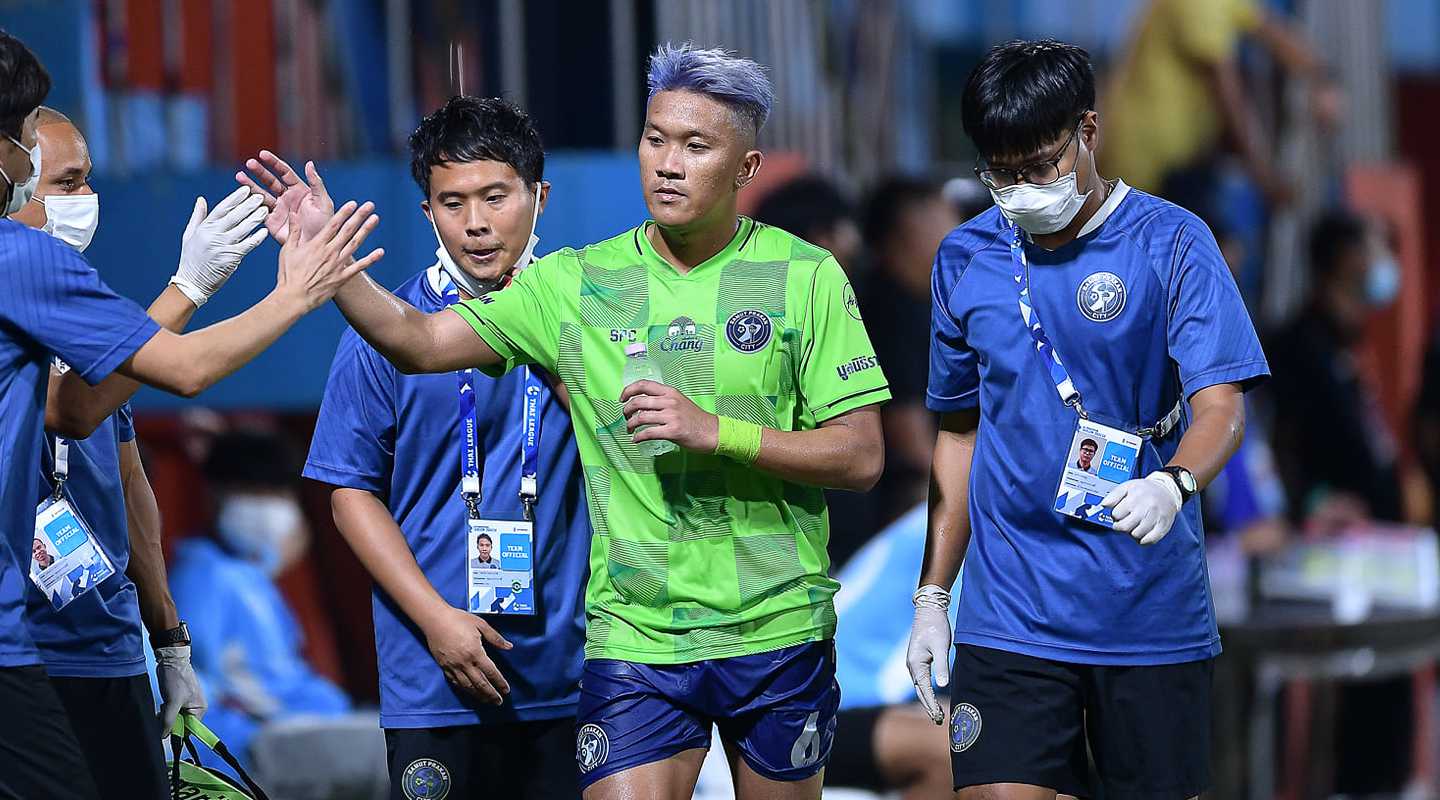 (This guy - Noppon Phonkham - was about to have probably his best performance ever in a Samut Prakan shirt. Photo: Go2Photo Stock)

As the teams were warming up for the game, I had the opportunity to chat with one of the trainining staff and he predicted that Samut Prakan would score three goals this evening. I just smiled politely...but perhaps the backroom staff knew things that the travelling fans didn't. In the opening stages of the contest, there seemed to be a fire in the belly of every Samut Prakan player. They were clearly determined to leave everything out there on that pitch.

However, it's Port that almost strike the opening blow with Salvadoran striker Nelson Bonilla hitting the woodwork with a long range shot. Samut Prakan hit back with the perfect response though. Samuel Rosa fails to control a through ball from a Samut Prakan counter-attack, but Chaiyawat Buran, playing a more attacking role this evening, is there to feed the loose ball to Captain Chayawat Srinawong, who in turn sells the Port defence a dummy and sidefoots home to put the noisy away supporters in dreamland.

Samuel Rosa almost opens his Samut Prakan account to make it two-nil on the half hour but can only watch in frustration as his header comes back off the crossbar and Kevin Ingreso smash the rebound high and wide.

Port almost claw their way back into an end-to-end contest on the stroke of half-time but defender Kevin Deeromram's free kick rattles the post with Pathiwat well beaten. You get the distinct feeling it's just not going to be Port's night. 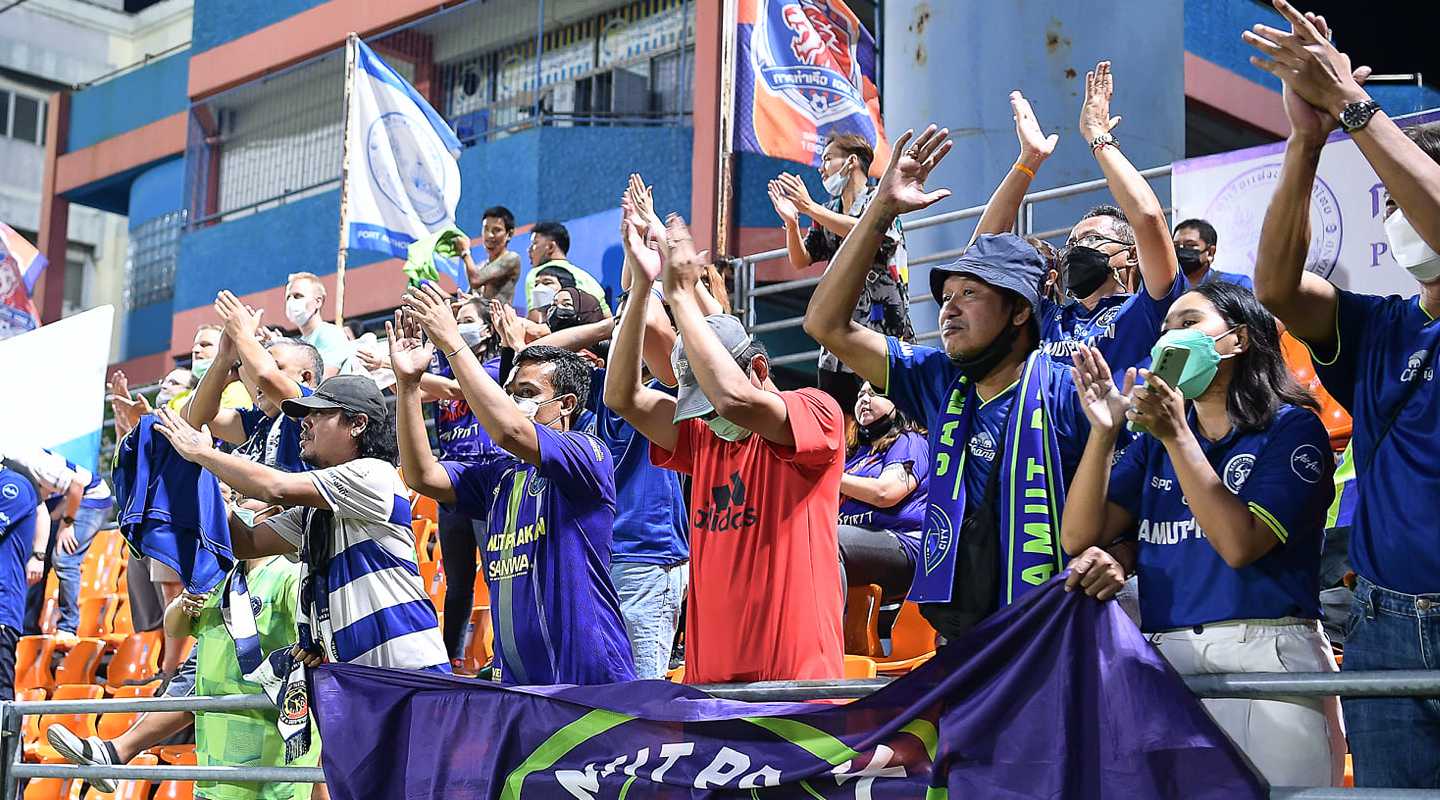 Ten minutes into the second period, the visitors snatch a second and it's another Chaiyawat/Chayawat combination. Port defender Bordin Phala dilly dallies just outside the penalty area and gets his pocket picked by the Samut Prakan captain. The skipper's measured pass across goal leaves Chaiyawat Buran to apply the finishing touch. The goalscorer, already on a yellow card, is then substituted as Daisuke Sakai comes on to add some renewed energy to midfield.

Port's task of salvaging something from the game becomes mission impossible with twenty minutes remaining as Sergio Suarez receives his marching orders for elbowing Noppon Phonkaem in the face. Suarez looks far from happy with that decision.

An acrobatic save from Pathiwat to keep out a Nurul header preserves the two-goal cushion. At the other end, Samuel Rosa has the chance to really put some gloss on the scoreline in the dying seconds but manages to miss from three yards out.

A red card for Adisorn for a reckless tackle in injury time means the home side finish the game with nine men but it was already well over as a contest. 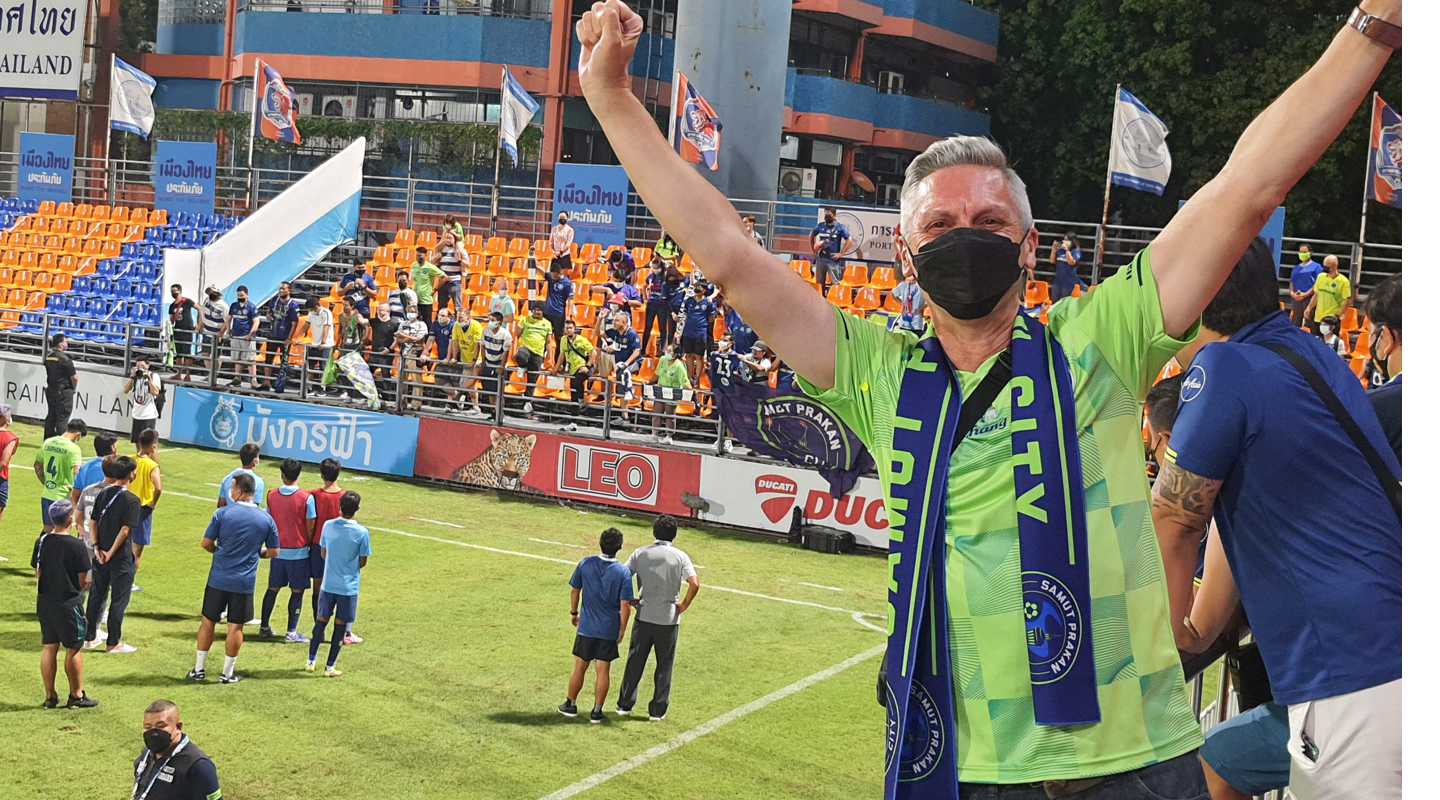 And suddenly there is hope. That performance was on another level compared to what we've witnessed for most of the season. If we can replicate that kind of commitment in our next three games (all at home) there is every chance we could survive.

With Suphanburi losing at BG Pathum, the situation at the bottom of the table looks a good deal rosier if you're a Samut Prakan fan. In the updated table below, I've also included Nakhon Ratchisima in 12th place. Their recent loss of form and run of bad results has rather dragged them into the mix...and the Swatcats are our next opponents.

We now have three home matches on the spin, beginning with Nakhon Ratchisima on Sunday 6th March.