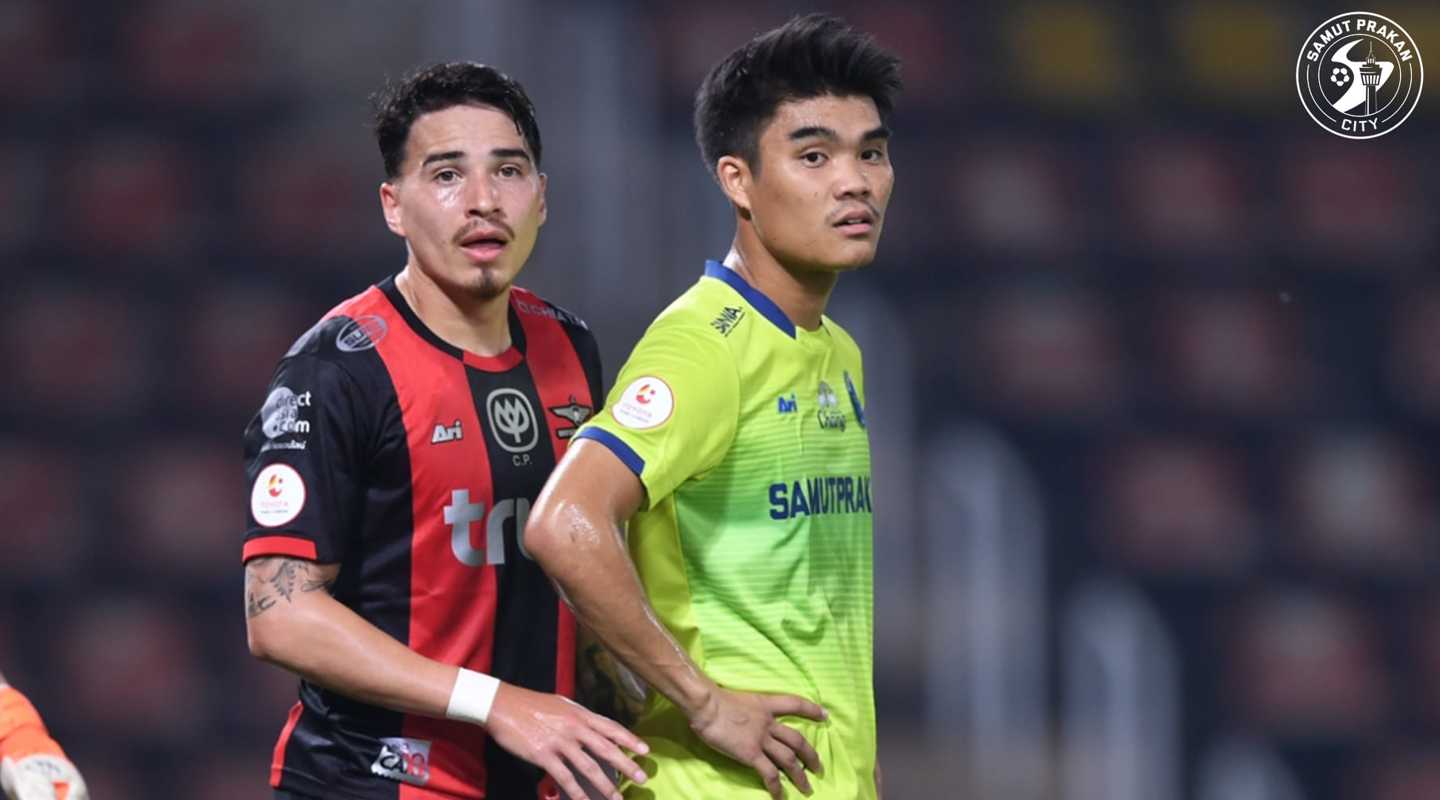 Fans are not allowed into stadiums at the moment so I'm only getting to watch the games on TV.  In addition, clubs are having to play two matches a week to complete the season before the end of March. Therefore I'll write a weekly blog (and cover two games) while the current situation is ongoing.

On Sunday, Samut Prakan played away at Bangkok United. Although I was disappointed not to be able to go, Bangkok United's Thammasat stadium has one of the crappiest views in the premier league for away fans - so I wasn't what you might call heartbroken.

Bangkok United were having a somewhat mixed season, lying in mid-table, having won just six of their 16 matches - not what you'd expect from one of Thailand's biggest club sides. However, they had a very good record against Samut Prakan City and we'd taken just one point from them in three meetings.

After going out of the FA Cup against Muangthong last week, we needed at least a draw to keep our season on track and a possible top three finish. 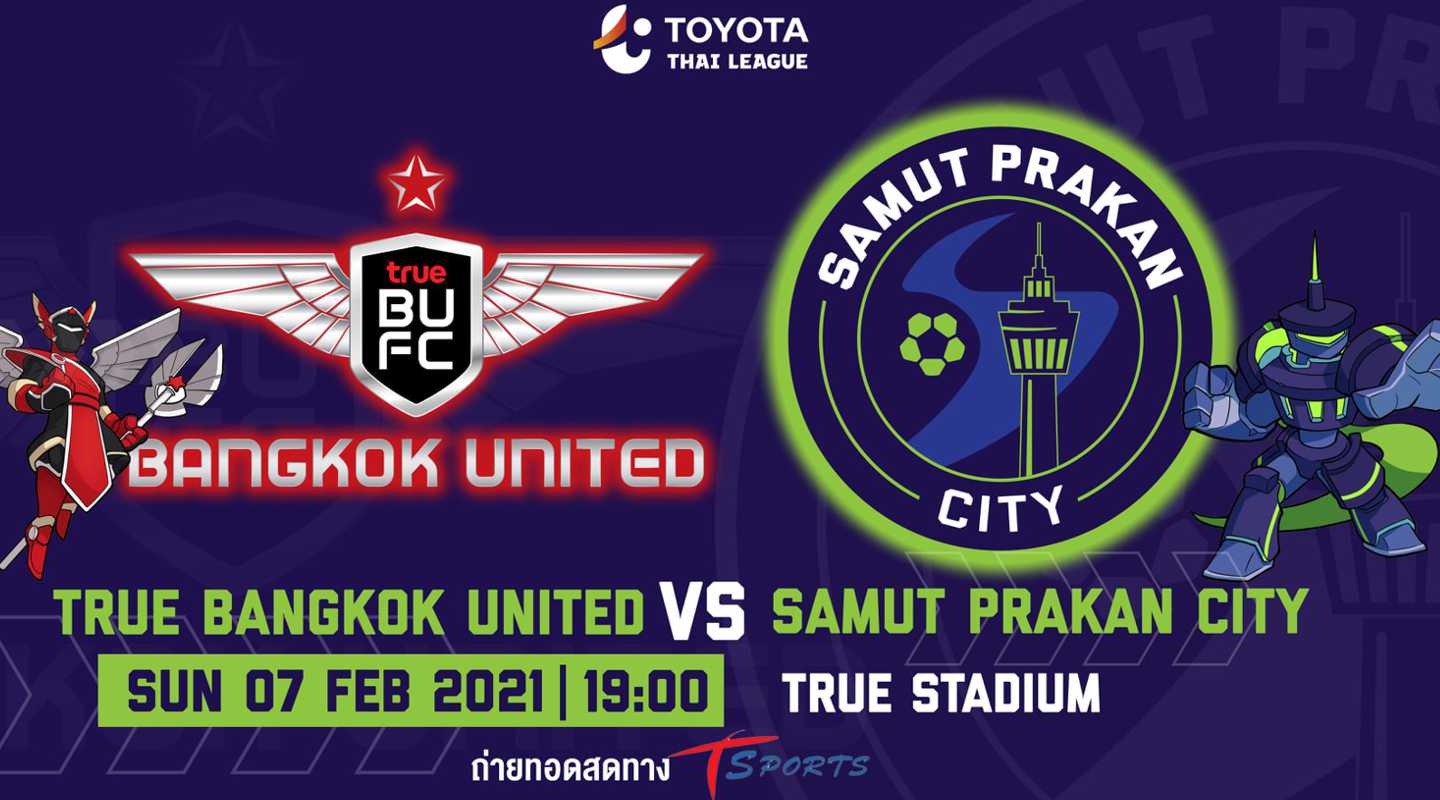 We were without our big Slovenian centre half, Aris Jarifovic, for this game (serving a one-match ban) but welcomed back Barros Tardelli to lead the attack (how much we missed him against Muangthong).

The first half was an entertaining affair. Both sides gave away possession cheaply, which led to an end-to-end game with plenty of chances. Samut Prakan's best period came in the final ten minutes with Toti, Tardeli and Suphanan all going close. It bode well for the second half as we went into the interval goal-less and all to play for. At least that's what the Samut Prakan fans thought.

I'm not sure whether our second half performance was as bad as I've seen us play or Bangkok United were just terrific - but credit to them for stepping up a gear. The first goal came on 49 minutes from Brazilian midfielder, Vander Luis. Although it was well taken, the linesman had flagged for a foul during the build up and several Samut Prakan defenders had stopped playing. After a lengthy VAR check with virtually all of the Samut Prakan team getting in the referee's face, the goal was finally awarded.

Clearly rattled, the visitors started to lose all semblance of shape and discipline. There was nothing contentious about Bangkok United's second goal though as Thai U-23 international, Nattawut Suksum, unleashed a rasping drive from outside the box, beating Prakan keeper Pathiwat with ease.

2-0 down and even with thirty minutes left to play, it already felt like damage limitation.

The third and final goal of the evening comes almost direct from a corner with Puttinan evading the challenge of at least four defenders around him to apply the finishing touch. Thankfully the last quarter hour ticks by without any further additions.

We need to move on from that performance quickly but let's not take anything away from Bangkok United, who were simply ruthless in that second period.

This was definitely a wake-up call. Do we have the depth of squad to command a position in the top half of the table? I think the jury might be out. 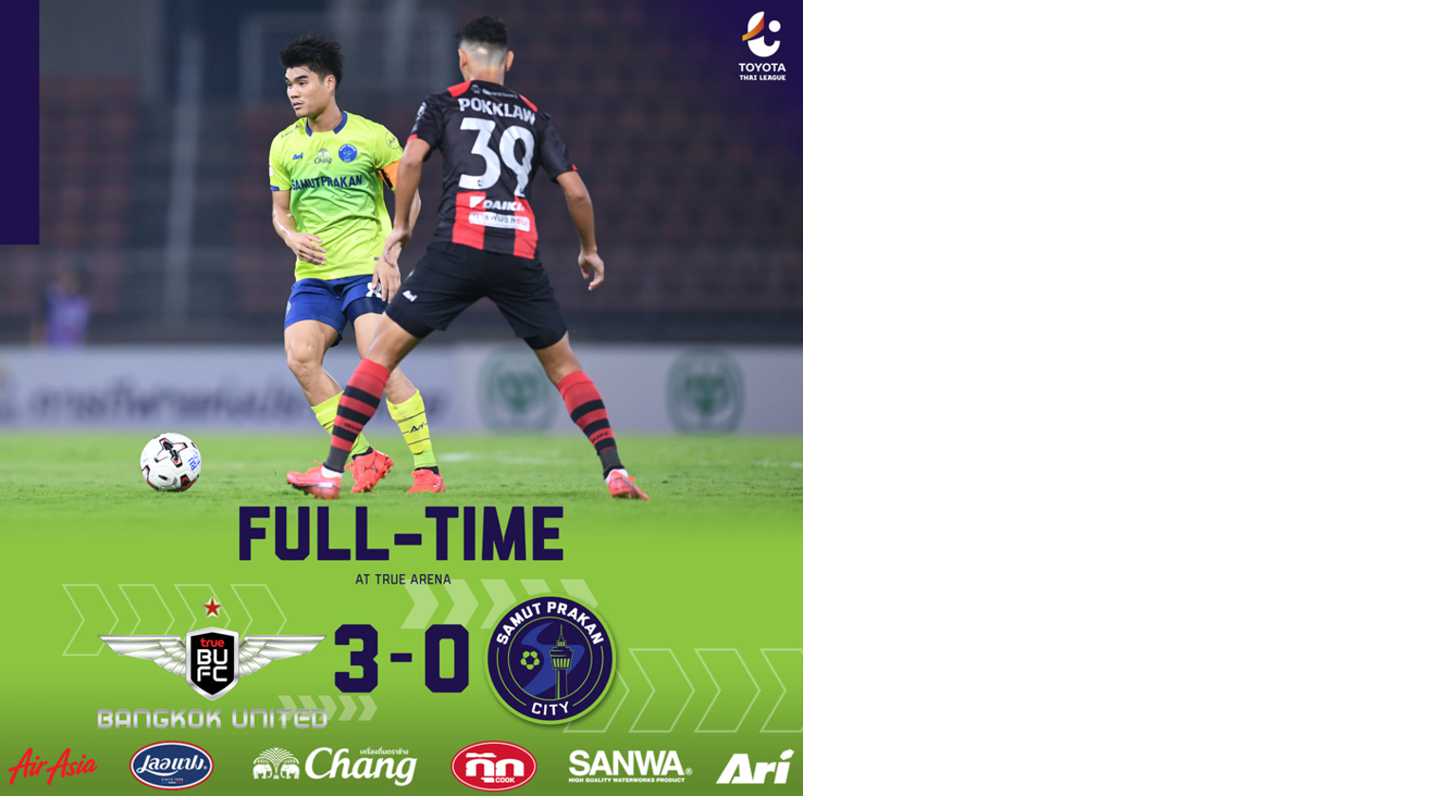 Let's get to this evening's game at home to Police Tero. Times have changed since the last time the two clubs met?

When we played Police Tero in early March 2020 (almost a year ago!) it was actually the last game before Thailand went into a three-month lockdown and entering the stadium that day, it was the first time I'd had a plastic temperature gun waved at me.

Police Tero were top of the league after their opening three games and Samut Prakan were in the relegation zone with just a solitary point to their name. Yes, times have changed indeed. Police Tero won that game 1-0, scoring with virtually their only goal attempt. I'm not normally the revengeful kind but I would love to whip their ass tonight. Joking aside, Sunday's defeat at Bangkok United made getting back to winning ways even more important.

Police Tero one of the favourites for relegation?

Not sure I'd call them favourites but at the time of writing, they're right down there in the mix and just two points above Supahanburi and Prachuap in 13th and 14th place respectively. (current league table)

Tero are currently on a run of three league defeats, in fact they've won just one of their last 12 games. It's been a spectacular fall since they topped the table back in March last year. 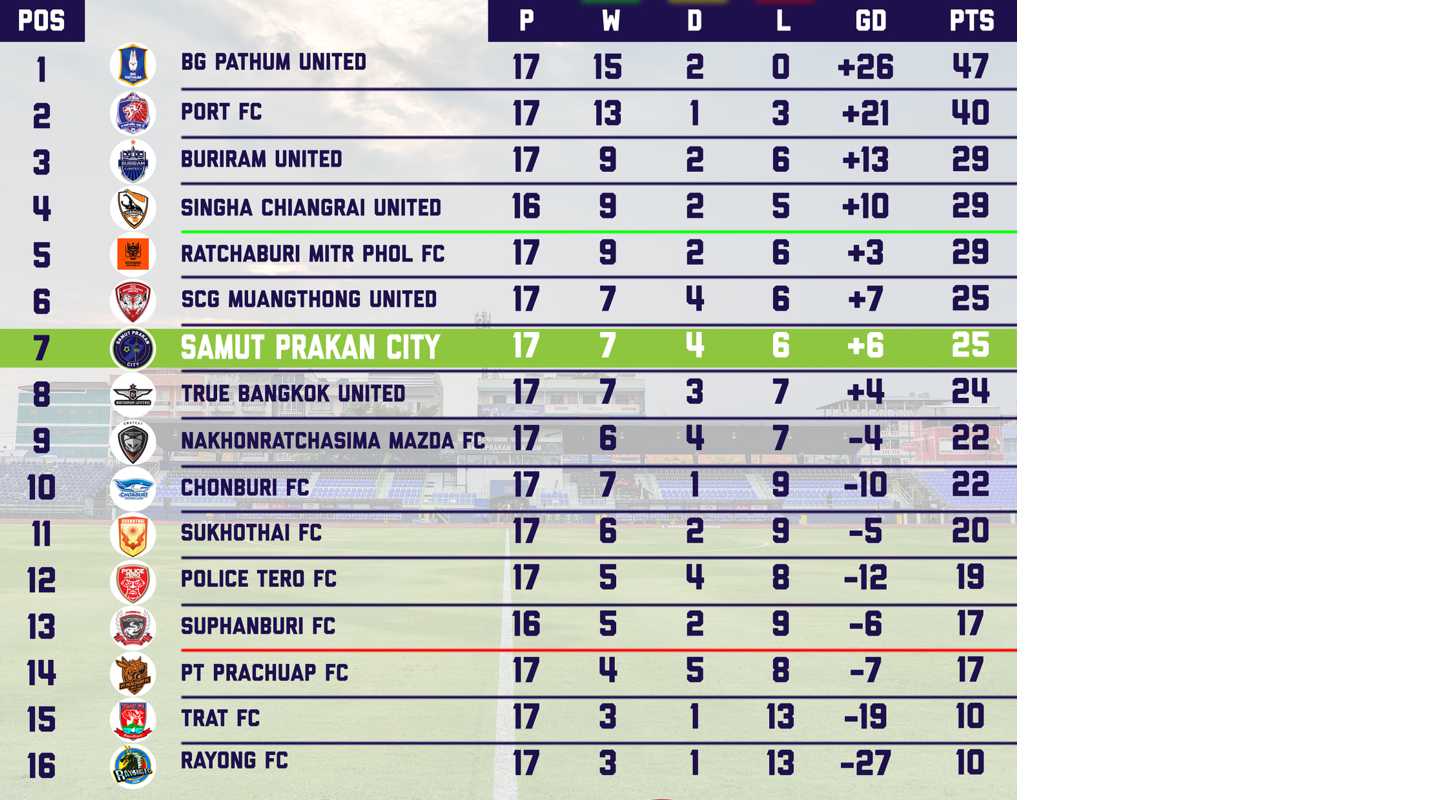 Let's get to the match itself then?

Manager Ishii-san named a full strength line-up with Aris Jarifovic returning in defence, the only change to the side that lost against Bangkok United.

We got off to a dream start, scoring twice in the opening six minutes. The first goal, a delicious inswinging corner from Toti, leaves Suphanan with the easiest of headers, and before we've even finished celebrating, Tardeli adds the second with a crisp drive from outside the box. Are we in for a Samut Prakan rout tonight? Are we heck as like.

On 18 minutes, goalkeeper Pathiwat, who I think has looked a bit wobbly of late, gifts a goal to the opposition. Under no pressure whatsoever, his clearance goes straight to a yellow shirt, who in turn sets up Tiago Chulapa to score Tero's opener.

Chulapa is a huge Brazilian striker who has been around the Thai leagues for a number of years. Along with the equally experienced Dragan Boskovich pulling the strings in midfield, those two were far too clever for Samut Prakan this evening.

At 2-1 down, Police Tero were back in the game and you could sense that surge of self-belief. The equalizer on 37 minutes comes as no surprise, Theerathep putting his laces through a half-volley after the ball rebounds off the crossbar.

Now we have a game on our hands!

Arthit Boodjinda is another strapping Police Tero unit. Give him the time and space and he'll outmuscle you. To let him skip through your defence with embarrassing ease just once is bad enough, but to allow him to do it twice in a devastating six-minute spell is simply unforgivable. 54 minutes on the clock and Samut Prakan are unbelievably 4-2 down.

There's really no way back from this and the home side look devoid of ideas. Star players like Jaroensak and Teerapon struggle to get into the game and heads start dropping all around them. Sheer frustration takes over as Captain Peeradol goes into the referee's notebook for a mistimed tackle. Then the red mist comes down, Peeradol makes a second rash challenge and the ref points him in the direction of the dressing room. Two goals behind and down to ten men. Mountain. To. Climb.

With less than ten minutes remaining, Yuto Ono smacks a shot against the crossbar and the rebound looks to have struck a Tero defender on the arm. VAR agrees and Tardelli strokes home the penalty to give Samut Prakan a lifeline they probably don't deserve. But in what little time remains, the home side never look like scoring a fourth and getting back on level terms.

In the dying seconds, Police Tero add a fifth to make the final scoreline a tad more realistic. Tiago Chulapa scores his second of the evening to cap an excellent personal performance and a terrific all-round team effort from Police Tero.

Go on, watch the highlights. From behind the sofa if you have to. 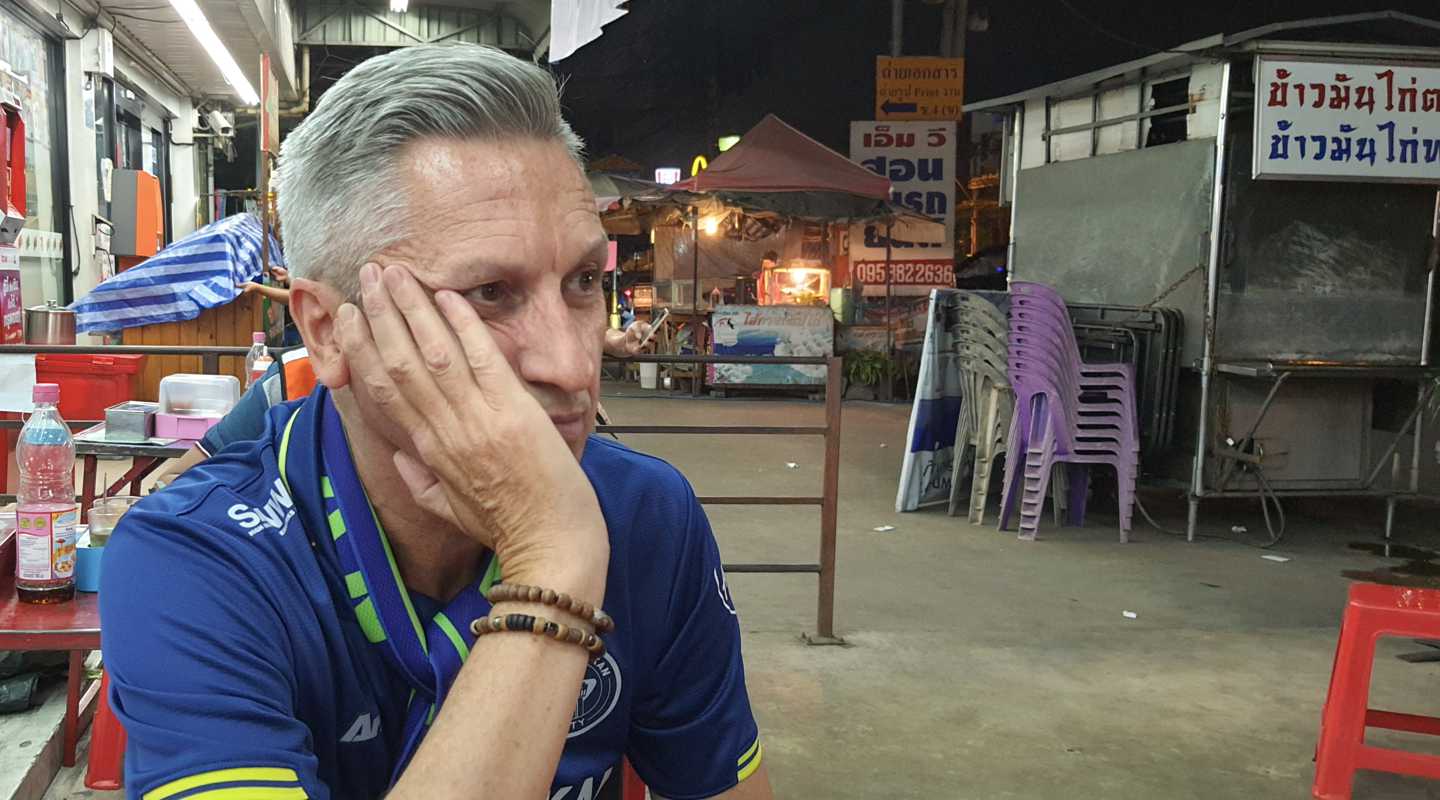 Had I gone to tonight's game, this would probably have been my expression afterwards.

League tables don't lie; Samut Prakan City are where they deserve to be. We're a mid-table side, who on our day can beat any other team in the premier league (or lose to any other team as well)

We're still a fair way behind what I would call 'the big six clubs' and that's why the 3-0 defeat at Bangkok United was not totally unexpected. However, I did expect to beat Police Tero at home and beat them comfortably. This was a team on a wretched run of form.

We seem to struggle against teams with big, physical players like Boskovich and Chulapa (who were both superb for Police Tero tonight). We get outmuscled and don't seem to have a plan B on how to counteract it. Instead, we get frustrated and lose all composure.

Oh well, let's look forward to the next couple of games and attempt to put things right.

Still no signs of fans being let into stadiums?

No. I'm beginning to think the Thai FA are happy to play matches behind closed doors for the rest of the season - but we'll see.