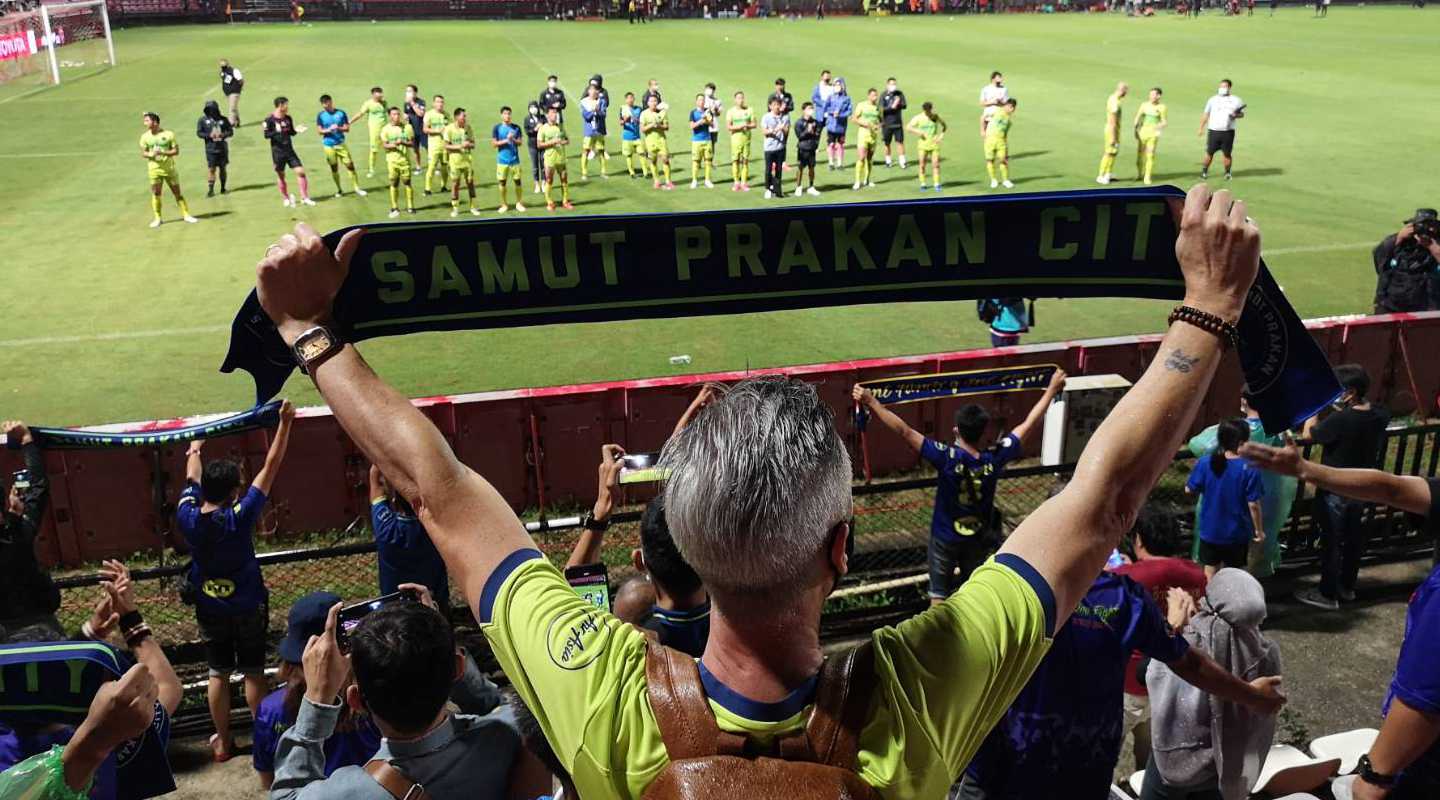 So, away to Muangthong United - and a ground with happy memories

This fixture last year was possibly our best away performance of the season. Samut Prakan ran out 3-0 winners (it was an amazing second half showing) but in all fairness, we played Muangthong at just the right time. 'The Kirin' were suffering from their worst start to a league season in years and Samut Prakan were riding on the crest of a wave. Unfortunately, I couldn't really see a repeat of that score-line tonight.

But they've had another poor start to the season?

By Muangthong's high standards, certainly. These are one of the Premier's biggest clubs in size and stature, but they've collected just six points so far, care of a 3-0 win at Rayong (everybody's beating Rayong though) and a narrow home win against Chonburi. As it stood before the game, Muangthong sat just two places above Samut Prakan in the lower half of the table.

And tonight is a chance to catch up with two more Samut Prakan old boys?

Yes, two of my favourite players, Picha Autra and Phumin Kaewta, moved across the city to join Muangthong several weeks ago, however only Picha Autra, wearing his familiar number 37 shirt, started the game.

Probably Brazilian forward and vice captain, Derley, who joined the club in 2019 after a decade spent mostly in the Brazilian and Portuguese Leagues. This included four seasons at Benfica, however, he made just 15 appearances for the Portuguese giants. The 32-year-old Derley has found the net three times in his five outings for Muangthong this season. 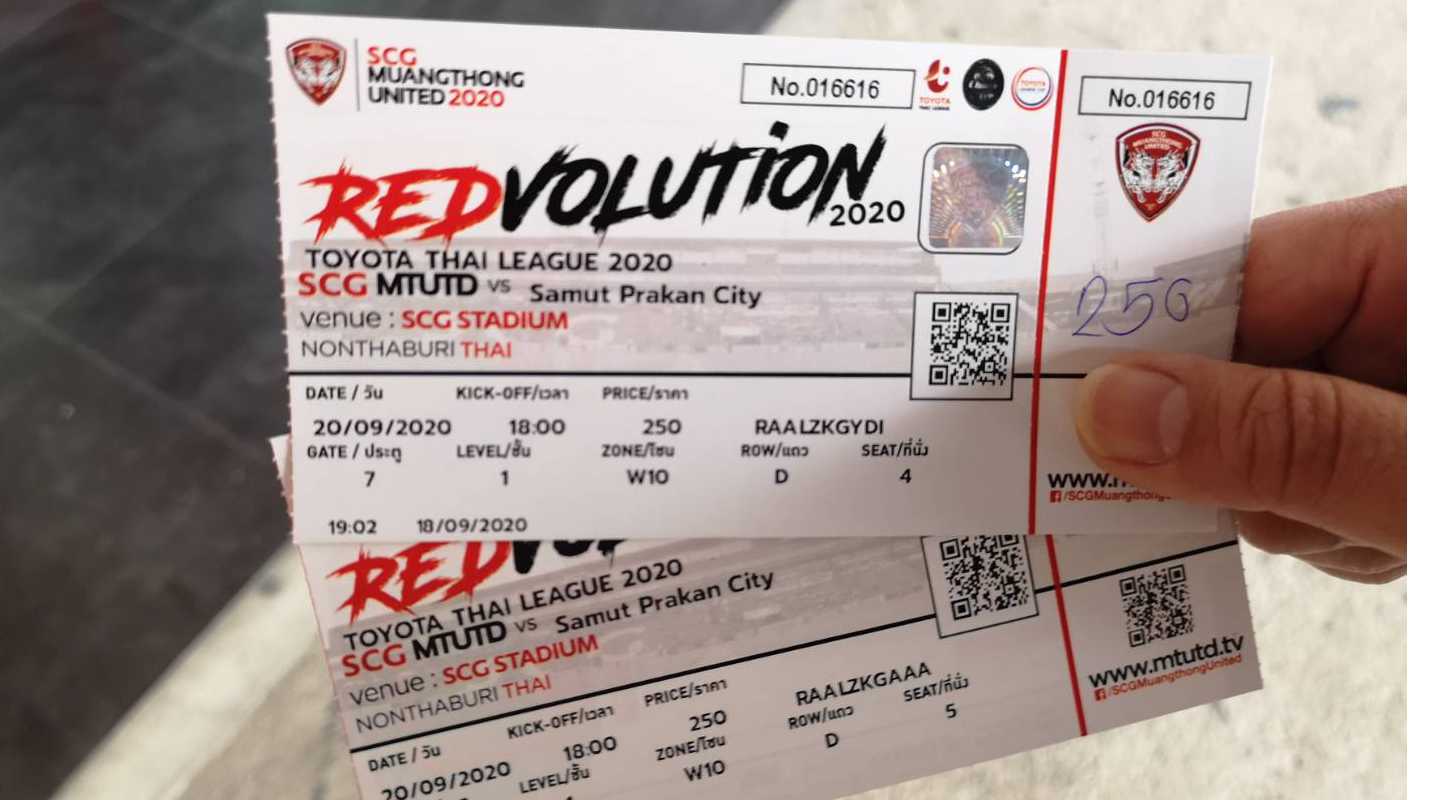 Any problems getting tickets under 'the new normal' and reduced stadium capacities?

None whatsoever. Tickets were sold to Samut Prakan fans on the day of the match. There was the usual wave of a temperature gun on entering the stadium and then you could purchase as many seats as you wanted from the ticket counter. Even Muangthong dispensed with the idea of selling tickets online and made a thousand extra seats available to their fans before kick off.  It seems that many TPL clubs are having trouble attracting fans back to watch football after the six-month suspension.

How many Samut Prakan fans were there in the end?

About 70-80 hardy souls braved the rainy conditions and credit where it's due, were in good voice throughout. We all huddled together in the usual uncovered away section but while a light rain fell for most of the evening, it never became heavy enough to ruin the occasion. 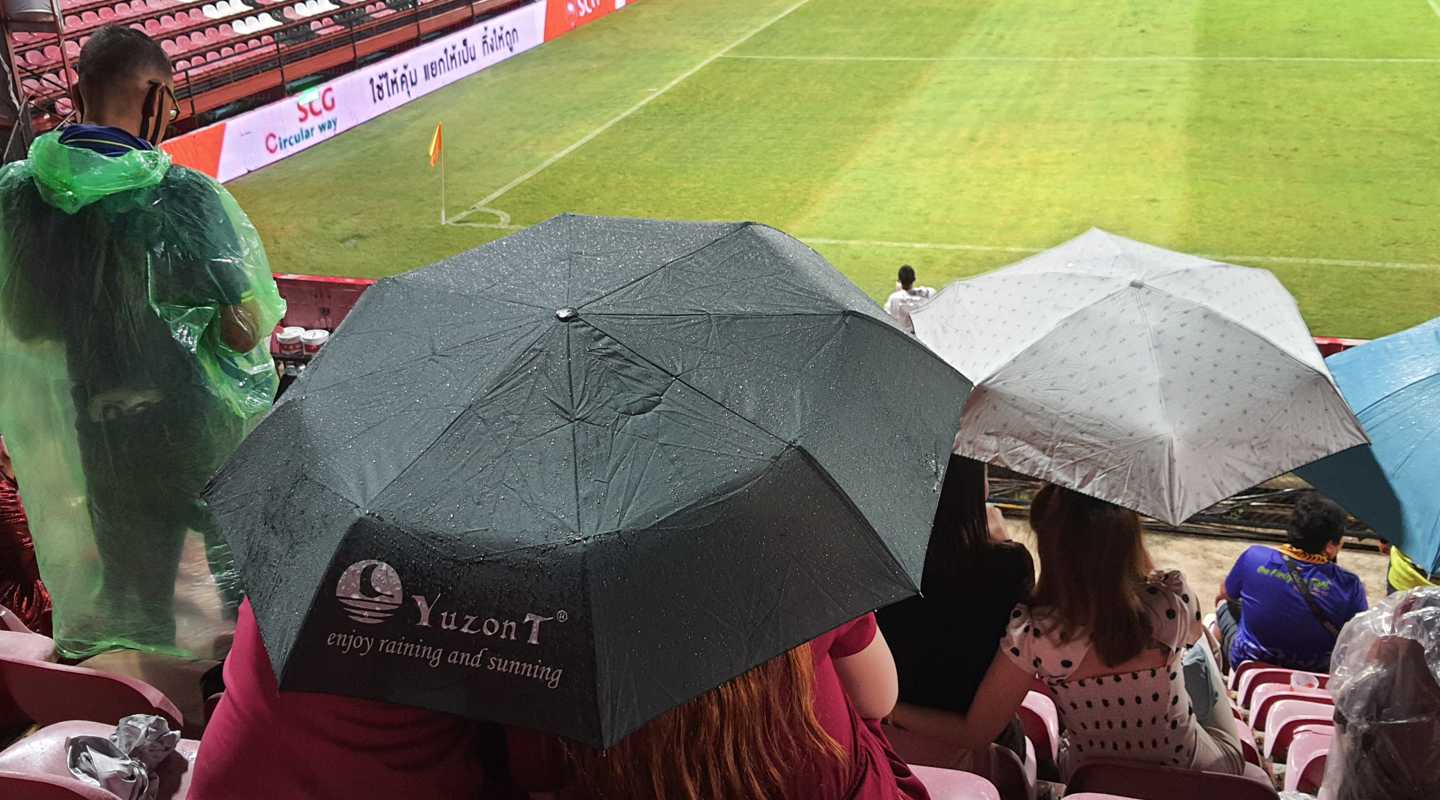 The journey from Samut Prakan to Muangthong took us just 40 minutes (expressway virtually door-to-door) but not knowing how easy or difficult it would be to obtain tickets, we arrived at the ground far too early. Fortunately, I had done my research on the internet and found us a delightful vintage cafe called Faraday, with friendly staff and reasonably priced food, and just a minute's walk from the stadium. It was also a great place to leave the car. 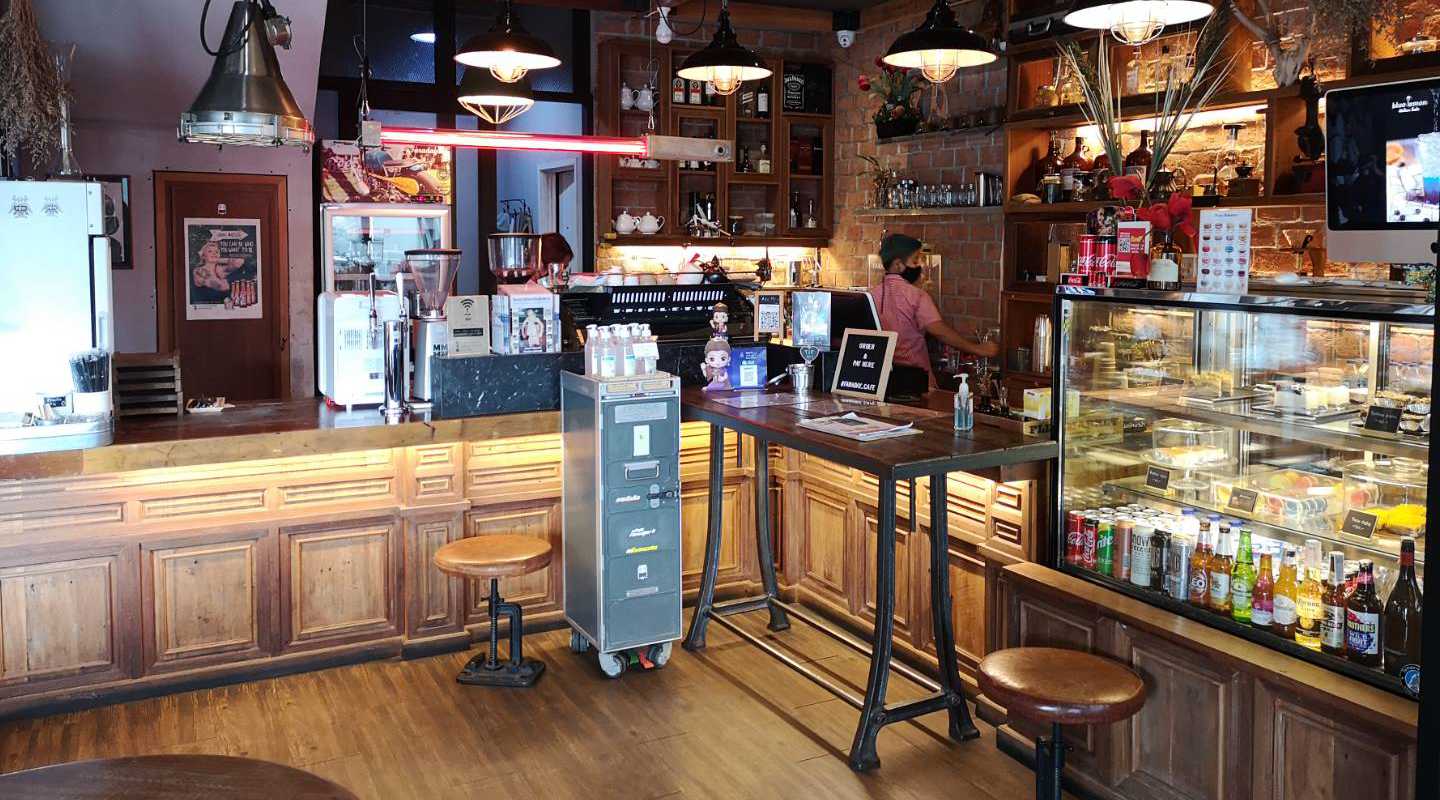 Tickets purchased, we ambled around the perimeters of the SCG Stadium, had a browse in the well-stocked club shop, took the obligatory photo with the club crest and watched some of the activities in the fan zone. Muangthong does the pre-match build-up as well as any club in the Thai Premier League.

As for the stadium itself, it looks wonderful from a distance but once you get inside, it really is extremely shabby and in need of some tender loving care. A Muangthong fan later told me on social media that many home fans are voicing the same opinion. 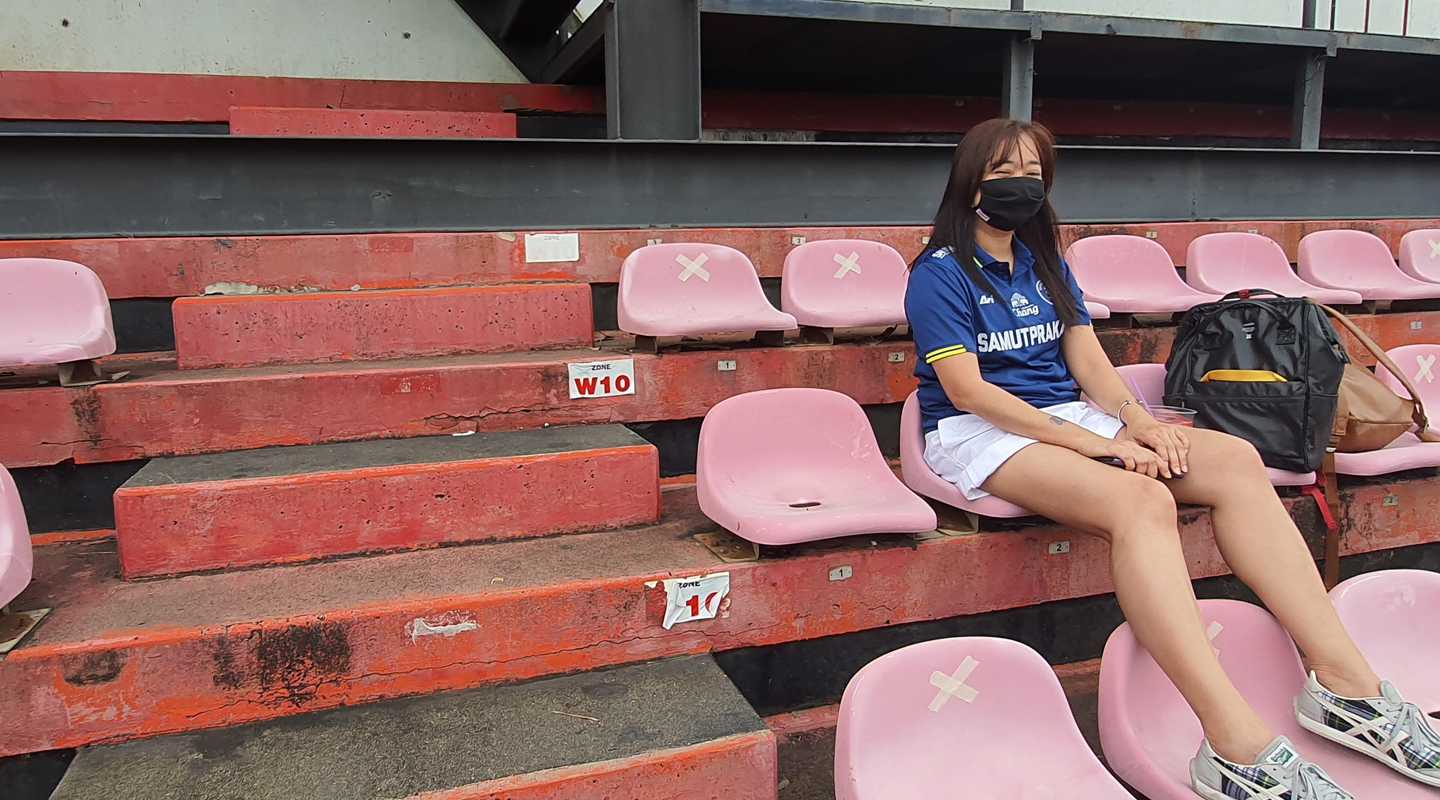 This quickly became a match littered with niggly fouls and questionable challenges - a stop-start affair controlled by a whistle-happy referee. There wasn't an awful lot to fill a football reporter's notebook and Samut Prakan's only real chance of the first period came when Saksit Jitvijan headed against the crossbar from a Yuto Ono corner.

Muangthong's best goal attempt resulted in arguably the miss of the season. Weerathep whips in a free kick from well outside the box and picks out the danger man, Derley, who heads against the post. The rebound leaves Rocha with virtually an open net but somehow the Muangthong defender manages to scoop his shot over the bar. A very lucky escape for the visitors. Thank God it fell to a defender.

Muangthong continue having the majority of chances (or half chances) but the returning Aris Jarifovic marshals the back line well and Patiwat is in good form between the sticks.

Goal-less at half-time and this could go either way. 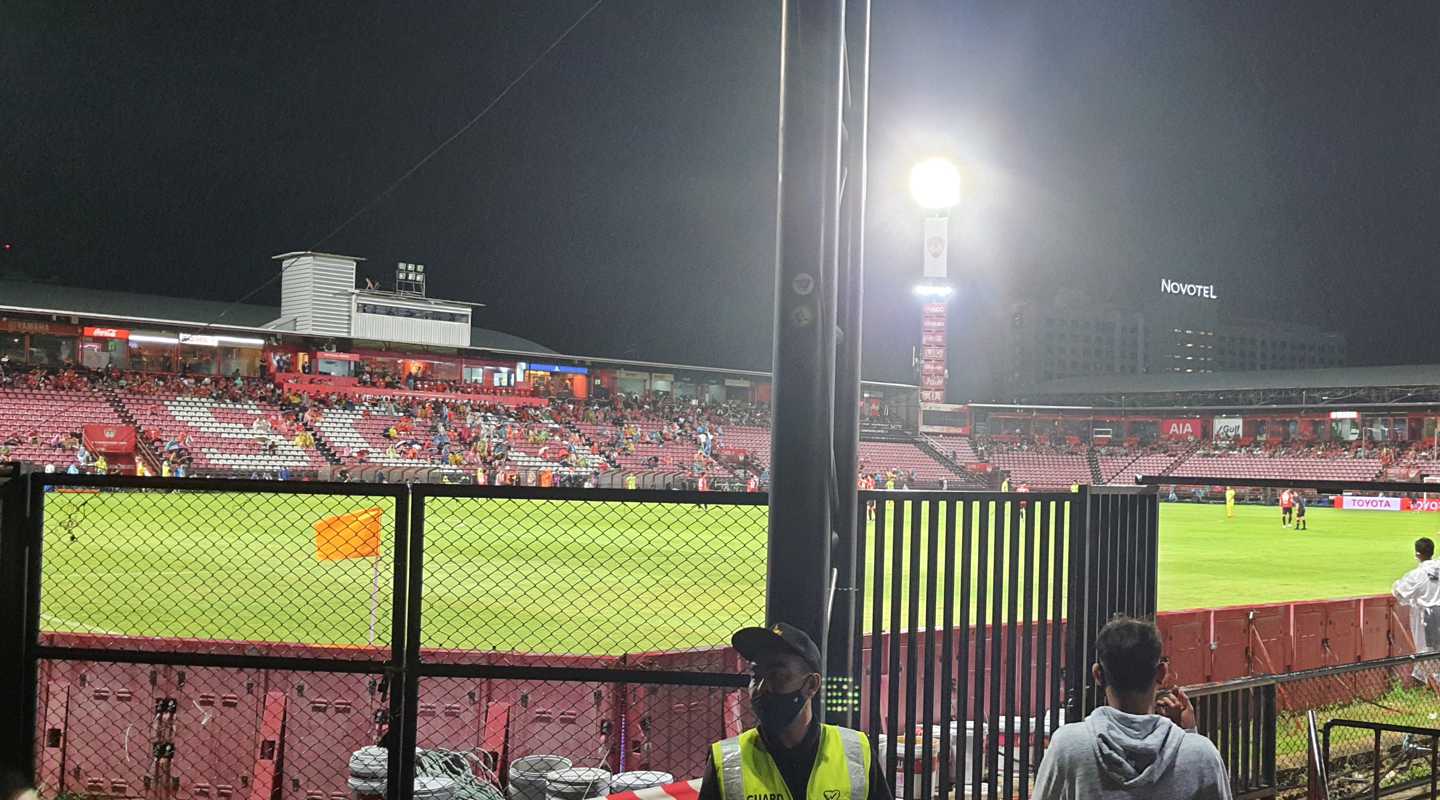 The rain started to fall heavier in the second period. In fact, we were in two minds whether to watch the remaining 45 minutes from behind the stand and peer through the railings.

On 55 minutes, Ex Samut-Prakan midfielder, Picha Autra - already on a yellow card for shirt-tugging - was substituted. The travelling contingent sang his name as he trudged along the opposite touchline but disappointingly, he never acknowledged us. He's got a questionable attitude that boy.

Chances once again became few and far between for both sides - the odd long range shot and tame header. Nothing much to trouble either keeper.

The final ten minutes were possibly Samut Prakan's best spell of the game, with winger Jaroensak looking the most likely to grab us an 'undeserved' three points to take back to Bang Plee. But it wasn't to be and the ref's final whistle came as relief for the 3,000 damp supporters who witnessed a relatively drab affair. 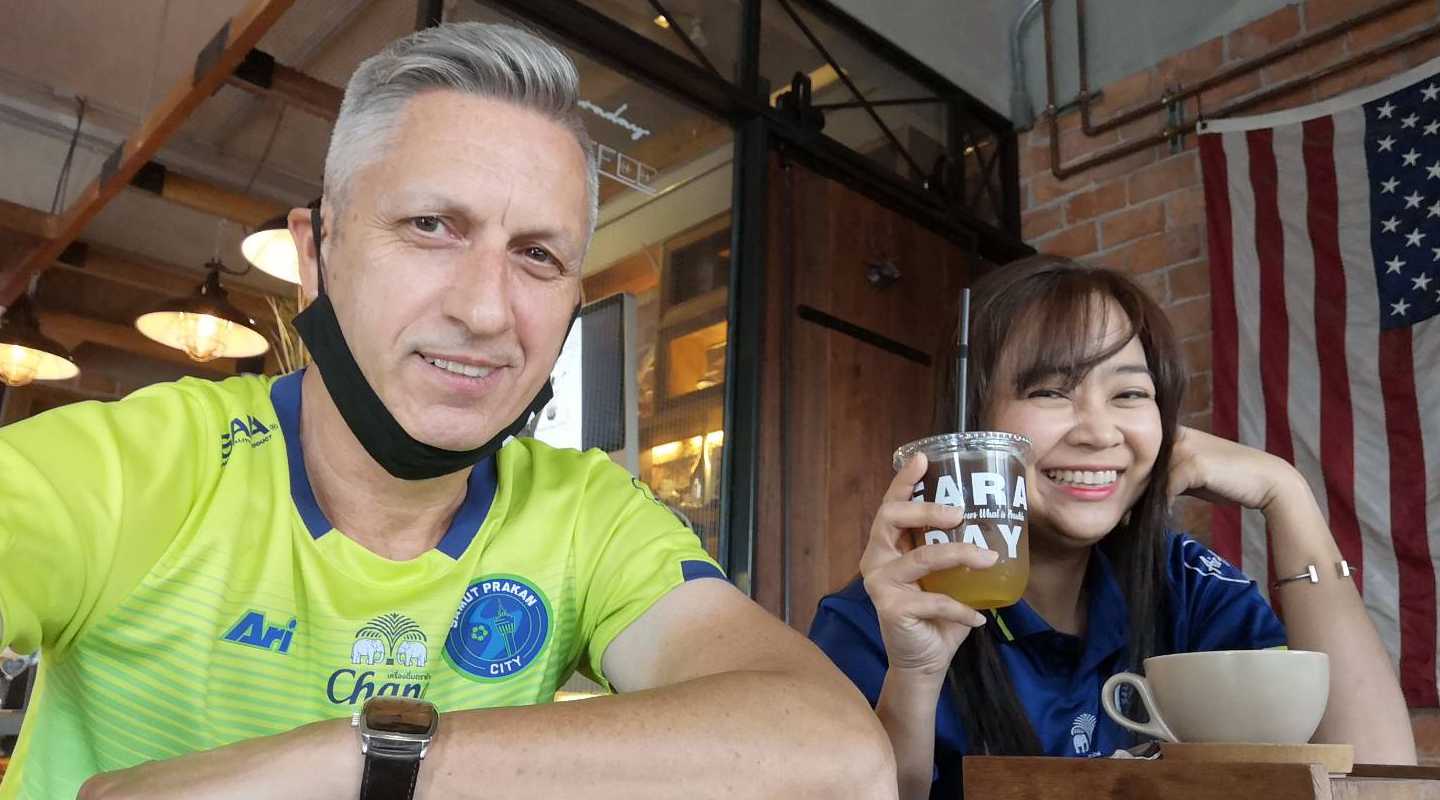 A point away at Muangthong is always a decent result but while I do think a draw was fair, we had to thank goalkeeper, Patiwat, for keeping us in it. He was my Samut Prakan man of the match and pulled off some crucial stops during spells of Muangthong pressure.

My biggest question is where the goals are coming from this season? We've managed just four goals in six games.  Defensively, we look fairly solid, but up front, Teerapon Yoyei appears low on confidence and Barros Tardeli is looking only a slight upgrade on Pedro Junior. Thankfully, Jaroensak is playing well and most of our attacking threat came from him this evening - but he can't do it alone.

Manager, Masatada Ishii, has the reputation of being a defensive-minded coach but going out to try and win games 1-0 - which seems to be the approach at the moment - is a risky strategy.

When's the next match?

Next Sunday, the 27th September. We make the long and awkward journey south to take on Prachuap.

You know what? under different circumstances I might have thought about it, because Prachuap is a lovely coastal town and an ideal place to spend a weekend and take in a football match. But throw reduced capacities, the September monsoon season and an uncovered away section into the equation and I just can't face the 10-hour return trip and a night or two in a strange hotel. Even contemplating it makes me wonder if I'm going slightly barmy. No thanks, I'll stay home and watch this one on TV.

Sadly, it will be the first game I've missed this season but I've got a busy schedule in October and November, including hopefully trips to Ratchaburi and Buriram.