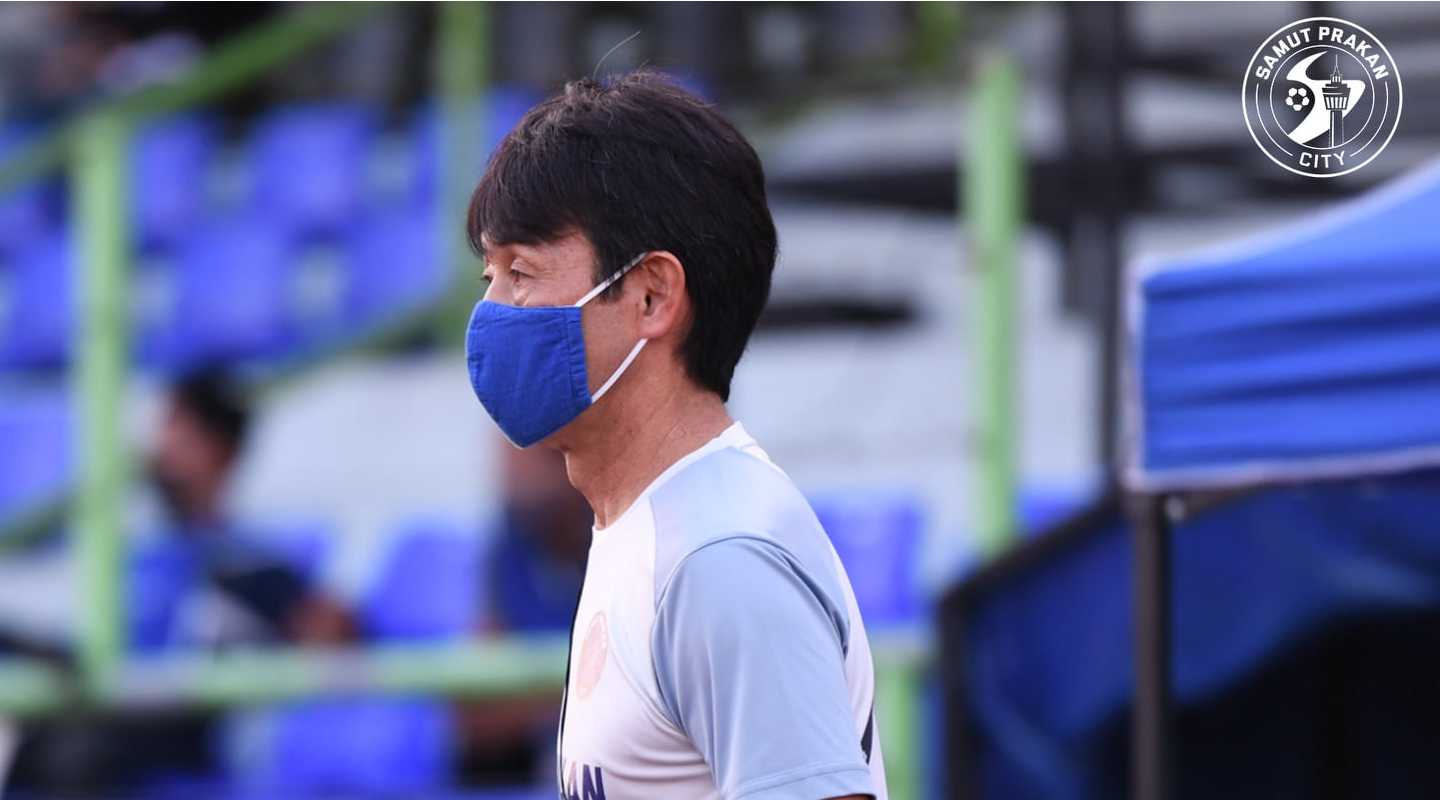 Note: Fans are not allowed into stadiums at the moment so I'm watching the games on TV.  In addition, clubs are having to play two matches a week to complete the season before the end of March. Therefore I'll write a weekly blog (and cover two games) while the current situation is ongoing.

On Saturday, Samut Prakan made the two-hour trip south to face Rayong FC, who were bottom of the table and many people's nailed-on favourites for a quick return to the second tier.

I was looking forward to this one when the fixtures came out at the beginning of the season. A comfortable coach journey from Bangkok, the chance to tick off a new stadium, but alas, thanks to Co-vid, it wasn't to be.

Reports and rumours have been circulating lately regarding Rayong's financial difficulties (apparently the players hadn't been paid for a couple of months). Even the club's official Facebook page doesn't seem to get much love and care bestowed upon it compared to other premier league clubs. A part of you fears Rayong FC might not survive beyond the end of this season.

Anyway, Samut Prakan were desperate for the three points having lost to Police Tero and Bangkok United in their two league games since the restart. If there was a golden opportunity to get the season back on track, then they don't come much better than away to a cash-strapped, bottom club.

But you weren't over confident?

Absolutely not. Rayong might only have won three games all season but if you analysed their results, those wins had come in their last three home games. including a 1-0 victory against Bangkok United. 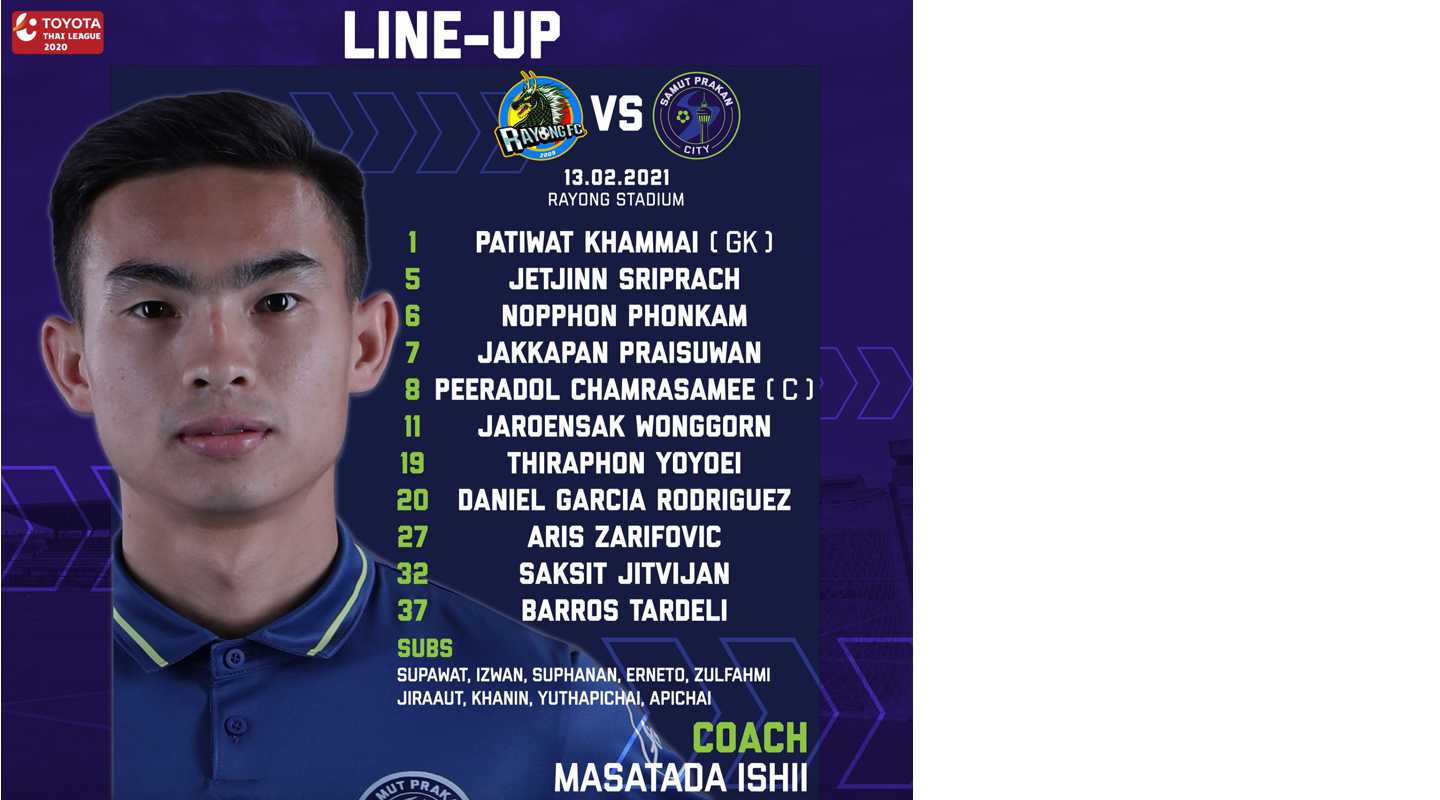 So how did it go?

Manager Ishii-san rang the changes in the starting eleven. Japanese midfielder, Yuto Ono, was serving a one match suspension for reaching four yellow cards and regular first team defenders, Ernesto and Suphanan dropped to the bench.

In came Saksit and Jetninn (playing against his former club) and there was a rare start for Samut Prakan's 'forgotten man', Noppon Phonkam, sporting a fetching purple hair-do.

After ten minutes of feeling each other out, it was Samut Prakan who drew first blood, with Barros Tardeli scoring his 13th goal of the season from the penalty spot after a lengthy VAR check spotted a foul on Teerapol Yoyei.

There wasn't an awful lot of goalmouth action in the rest of the first period, both sides resorting to wayward long range efforts, but our task became a little more difficult when mid-way through the first half, Toti pulled up with what looked like one of those nasty hamstring injuries. Hopefully he won't be out for too long.

The second half was surprisingly comfortable and although Samut Prakan only had that slender one goal advantage, you never felt Rayong posed much of a threat. Pathiwat pulled off a couple of good stops in the final ten minutes but the second half will mostly be remembered for some cynical Rayong challenges. Did the referee forget to bring his red card out with him because how Rayong finished the game with 11 men, I do not know. It got a little nasty out there at times. 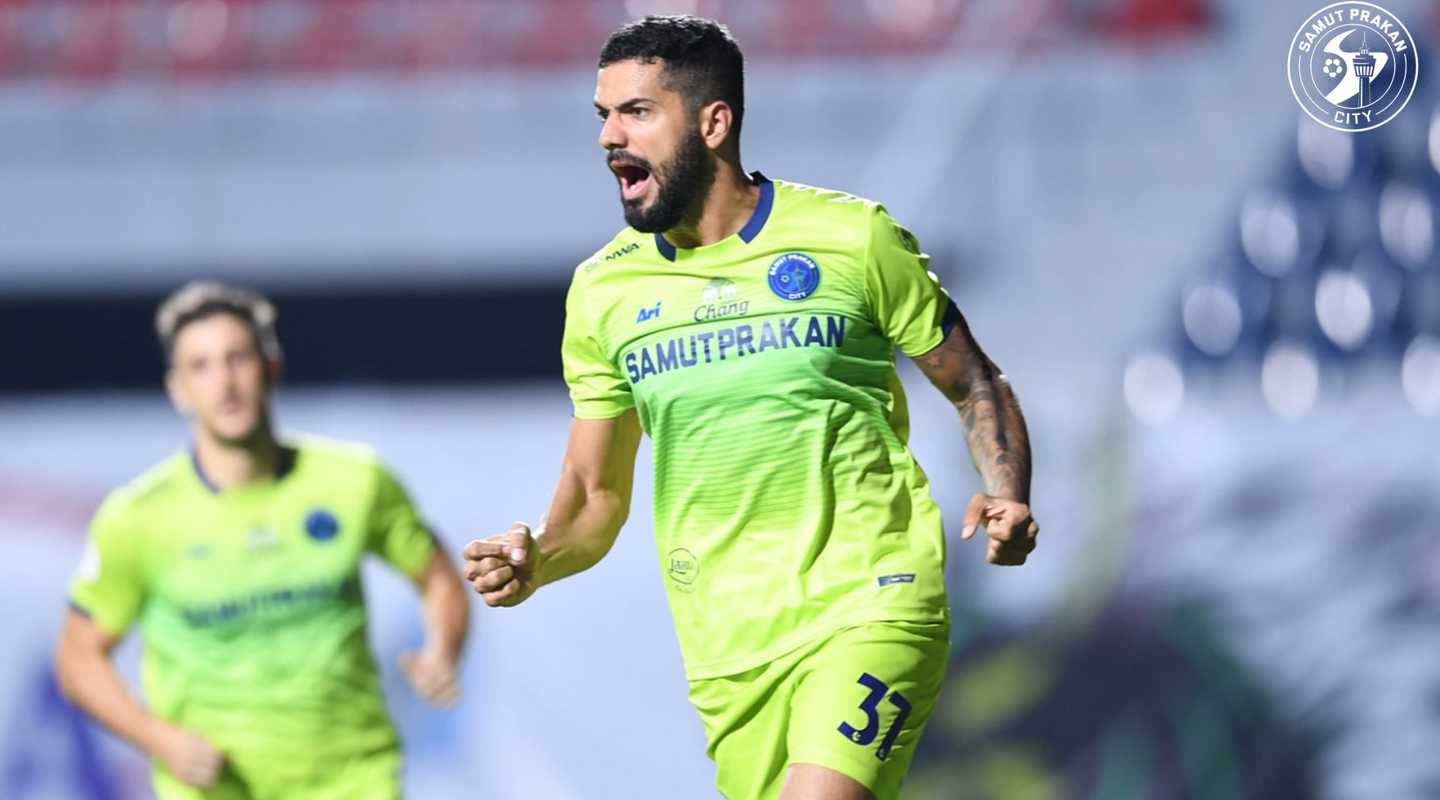 Tardelli celebrates after stroking home the only goal of the game from the penalty spot. (photo credit: official Samut Prakan Facebook page)

Ernesto and Suphanan both came on during the second half to add that bit of experience and we also got a first look at Zulfahmi Arifin, our Singaporean international. My word, he's a big lad! He didn't really have a lot to do in his 20-minute cameo but I'd like to see more of him.

Aris Jarifovic was my man of the match; I thought he marshalled the defence superbly tonight. After the game, I congratulated him via Facebook messenger; he responded instantly and we ended up having a brief chat. Don't you just love Thai football when your heroes make that sort of time for you?

Anyway, Rayong 0 Samut Prakan 1 was the final score and that was a thoroughly deserved three points. And sometimes the three points is all that matters. (Match highlights)

A final word on Rayong, surely they must be heading for the drop and I for one, won't be shedding any tears.

So this evening's game at home to Muangthong. We've got a decent record against them?

Although they knocked us out of the FA Cup this season, we're yet to lose to Muangthong in a league game as Samut Prakan City (won two and drawn one)

Muangthong are having a decent season though?

They are in good form at the moment (unbeaten in their last six games) and lying 5th in the table. Results on the road have been a somewhat mixed bag, having won four and lost four, but they are certainly not to be underestimated. Truth be told, I'd be reasonably happy with a draw this evening.

What was the score in this fixture last year?

Samut Prakan won 2-1 in one of the most exciting home games of the season. Muangthong grabbed an early lead, only for Boworn Tapla (now doing well at one of the Chiang Mai clubs) and Ibson Melo (who else?) to turn things around. It was a brilliant night that one.

Let's get to tonight's action, any surprises in the Samut Prakan line-up?

As expected, Yuto Ono returned to the midfield after serving his one match ban, along with Suphanan and Ernesto in defence. Daniel Toti was ruled out with the injury sustained against Rayong on Saturday.

For the visitors, Picha Autra was handed a start against his old club.

The game got underway with both teams content to be patient and pass the ball around in midfield but it was Muangthong who drew first blood in the 14th minute. The Samut Prakan defence switched off, allowing Uzbekhistani forward, Sardor Mirzaev, to head home unmarked from a left wing cross.

22 minutes in, and things go from bad to worse as Aris Jarifovic is hurt in a 50-50 challenge and signals to the sidelines that he needs to come off. While the coaching staff are deciding who to send on his place, Muangthong score a second. This time it's Willian Popp, who latches onto a neat through ball and scoops over the keeper for an easy finish.

Two-nil down against an in-form side with barely a quarter of the game gone - and our best centre half is on the treatment table. Surely there's no way back. But this is Samut Prakan and we never know when we're beaten. For those fans watching on TV, we're about to witness something special.

Crash! - Jaroensak treats us to a stepover or two and whips in the perfect centre. Tardeli does the rest, planting a bullet header past the Muangthong keeper. Samut Prakan are back in it.

Bang! - Jakkapan gets in on the act, hitting a scorcher from outside the box. He wheels away in celebration; he looks delighted does the lad.

Wallop! - Tardelli says anything you can do, I can do better and after Muangthong fail to clear another Jaroensak cross, Tardeli picks the ball up near the left touchline and smacks in Samut Prakan's third.

Three goals in a breathtaking 4-minute spell that has left the Muangthong players shellshocked.

But there's time for one more. With seconds of the half remaining, Ernesto Phumipan, who was my man of the match tonight, delivers a pinpoint cross and says to Tardeli - 'go on son, complete your hat-trick'. Tardeli hangs in the air and heads home in a manner the great Denis Law would've been proud of.

The half-time whistle blows and Samut Prakan are 4-2 up. I have no idea how we turned that around. 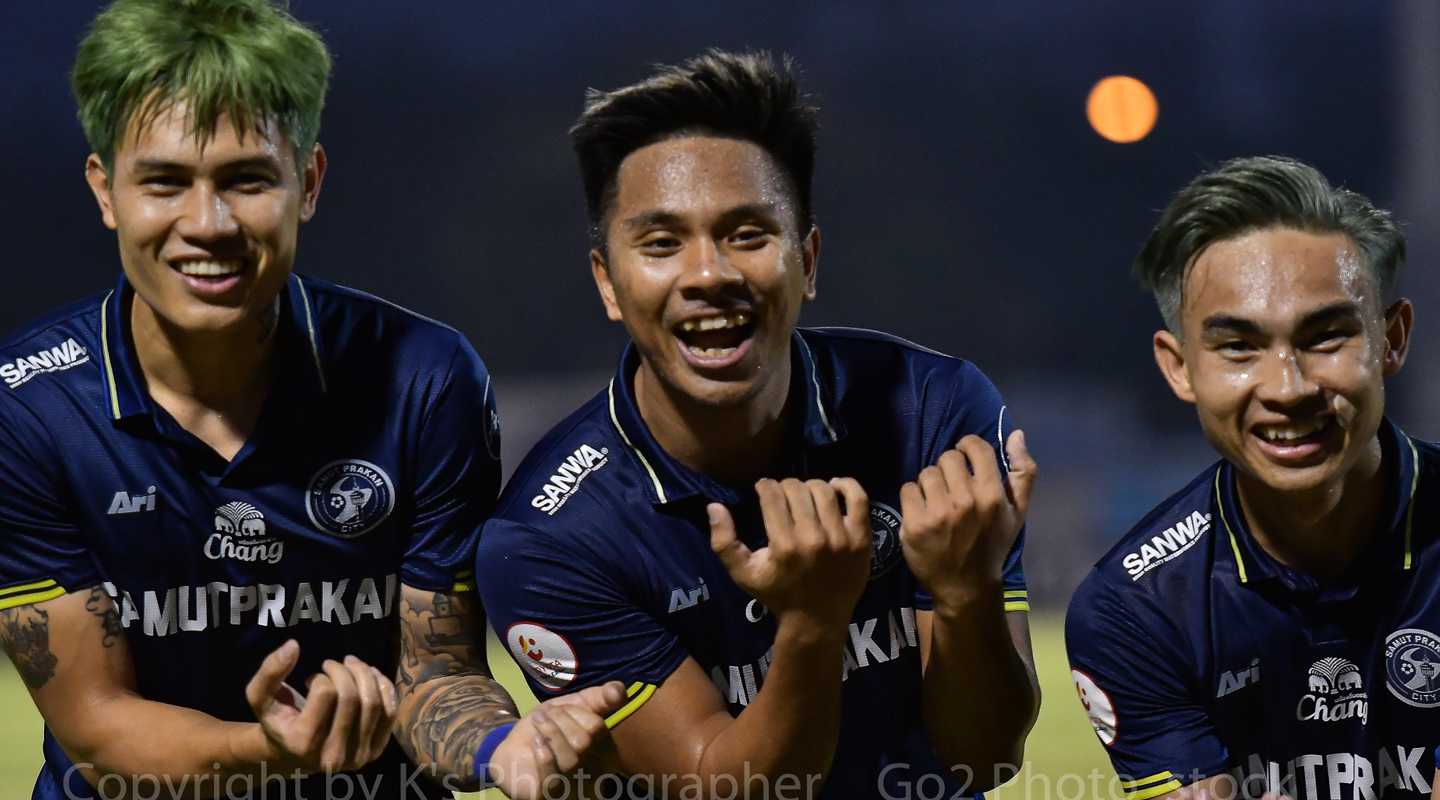 The players enjoyed it out there tonight. (photo credit: Go2 Photo Stock)

Of course you can't. There were no further goals in the game but it was still a gripping watch. Muangthong threw everything they had into rescuing at least a point but the Prakan defence held firm. On the few occasions the backline was breached, there was no way past goalkeeper Pathiwat, who commanded his box well tonight. Then again, I couldn't fault a single Samut Prakan player out there - and that includes the five substitutes. Great to see fringe players getting valuable game time in such an important fixture.

666. Six points out of six and up to sixth place in the table. Happy days! We seem to have got our mojo back.

I expected us to beat Rayong, which we did, despite it being a close and physical game. However, I thought there was every chance Muangthong would beat us or at least nick a point so I'm overjoyed with that result! We're becoming something of a bogey side to 'em.

We end with that same question - any sign of fans being let back into the stadiums?

There's a government meeting on Thursday 18th Feb, which will be followed by any announcement a few days later. There is a possibility that more restrictions will be lifted and that allowing spectators into sports events will be high on the agenda.

I'm not getting my hopes up too much but maybe, just maybe, we might get to see some live football in March. We'll have to wait and see.