So what's happened on the pitch since the last blog?

It feels like a long time ago, but before yet another league suspension due to the Co-vid situation, Samut Prakan entertained high-flying Port FC on the 27th December, a team on a run of eight straight victories.

The match was played behind closed doors, but for any Samut Prakan fan who managed to watch the contest on TV, it was a night that will live long in the memory. I always felt we had a chance of winning this encounter but not in the manner in which we did.

A Teerapon header and a Jaroensak screamer put Samut Prakan 2-0 up after just 7 minutes. Port pulled a goal back with a penalty but Captain Peeradol restored the Sea Fang's two goal cushion with a spot kick of his own before the interval.  Second half goals from Bureerat, Tardelli and Jarifovic saw Samut Prakan eventually run out 6-3 winners and while Port certainly had an off night, it was still an incredible display and one that saw Samut Prakan cement their place in the top six. Oh, and new signing, Toti enjoyed a great debut! Enjoy the highlights! 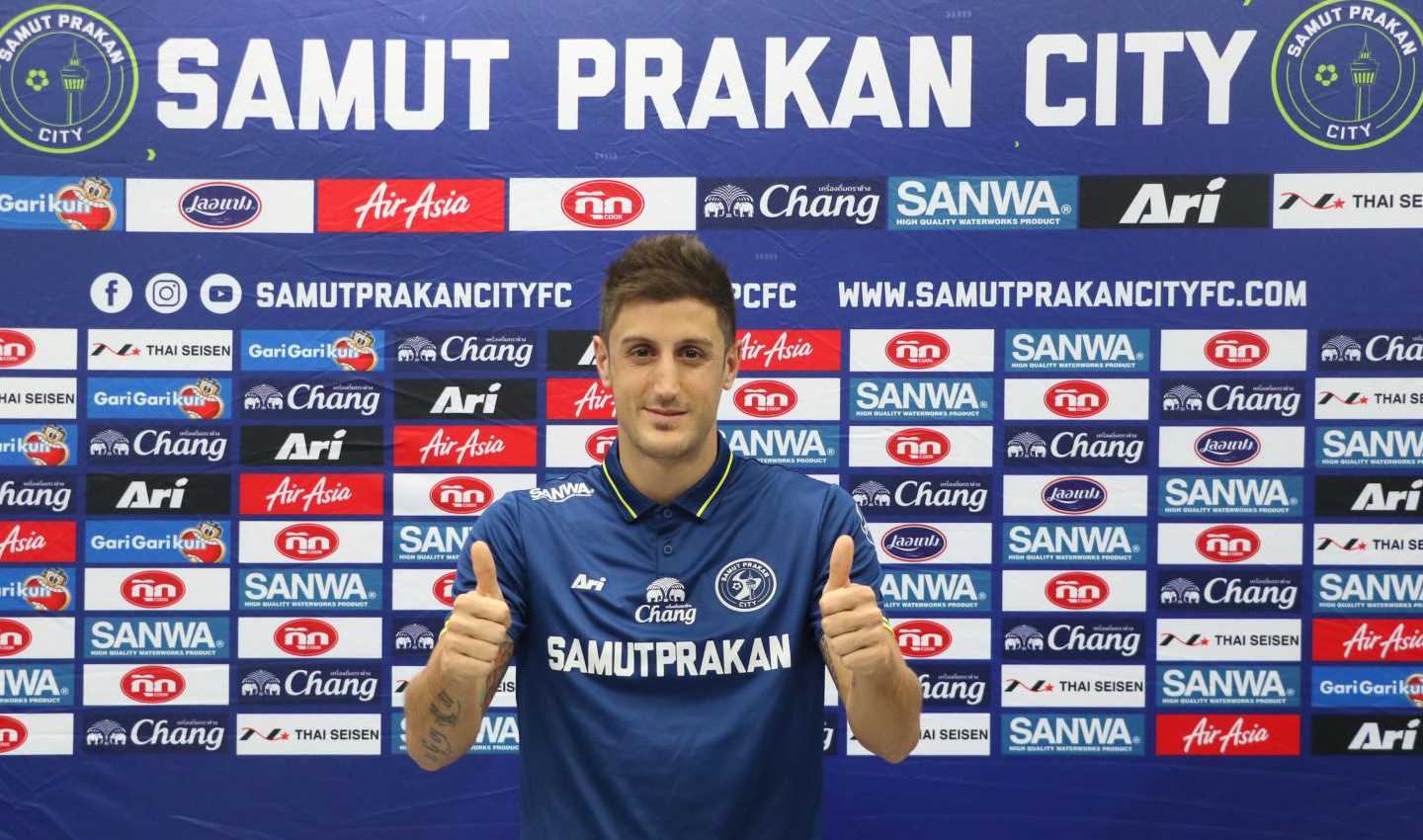 There has been some transfer activity then?

Yes, just before Christmas, Samut Prakan signed 33-year-old Spanish midfielder, Daniel Rodriguez (commonly known as 'Toti) on loan for the rest of the season from league leaders, BG Pathum.  A useful acquisition, Toti has played well over a hundred games and scored 28 goals in his five seasons at the club. Prior to moving to Thailand, Toti spent the best part of a decade playing in the Spanish second and third divisions for various clubs including his hometown, Salamanca, and Alaves.

Another loan signing was 29-year-old Singaporean, Zulfahmi Arifin. Equally at home in midfield or defence, Zulfahmi joins us from Suphanburi in the Thai League, where he has been on loan from his parent club, Hougang United. He also had a spell at Chonburi in 2018 and made 15 appearances for the Sharks.

Sadly, we've bid farewell to Japanese defender, Tatsuya Sakai, who joined League 2 side, Navy FC. He never got much chance to prove himself at Samut Prakan and appeared in just a handful of games, but I liked what I saw when he did play - and he came across as a very nice guy. Good luck Tatsuya and thank you!

Defender, Nattapon Malaphun, who was on loan from Buriram, has moved on to Suphanburi. He was another solid-looking player who was unfortunately limited to just a couple of appearances due to injury.

And finally, I say this with a tear in my eye, but Chakkit Laptrakul has also left the club. I loved 'Jack' but he clearly didn't figure in the manager's long term plans and it's not my business to speculate on why he's gone. However, Samut Prakan fans will always have the memories of that opening goal away at BG Pathum and the scorcher against Buriram (the club he has now joined)

Let's get to tonight's FA Cup match at Muangthong United. This is the second time Samut Prakan have been here this season?

Yes, the two teams locked horns back in September in a fairly drab goalless draw. A rainy night and a game to forget.

And this match will be played behind closed doors?

Yes, unfortunately no fans from either club will be allowed in, and while that's disappointing for those of us chomping at the bit to watch some live football action, fingers crossed the restrictions will be lifted as soon as possible. Until then, we'll just have watch the games on TV.

What do you think is the Thai FA's mindset at the current time?

In my opinion, they want to get the season over with as soon as possible. The rest of this season's fixtures have already been re-arranged and every premier league team now faces a punishing schedule of virtually two games a week until the end of March. I just don't feel the decision to allow fans into stadiums is a priority at the present time. Completing the season is priority number one and then we'll start up again in August.

Talking of fixture congestion, it's the same for the FA Cup?

Yes, whoever wins tonight goes through to the last eight and those quarter-final ties will be played on the 3rd April. The semi finals will be contested the following Wednesday (7th April) and the final will take place on Sunday the 11th. So that's quarter-finals, semi-finals and the final in just 8 days! It could be an exciting end to the season though for whoever gets there.

Well, as Samut Prakan City we've played these guys three times and we're yet to taste defeat. We don't fear Muangthong, certainly not with the form we were showing before the league was suspended.

Let's get to the game itself. Any surprises in the team line-up?

There was no Barros Tardelli to lead the forward line (was he injured because there had been no announcement on the club's Facebook page?) His place was taken by Jiraaut Wingwon.

Samut Prakan started the game brightly but still managed to concede the opening goal in the 6th minute. From the home team's first corner, Aris Jarifovic mistimes a header and the ball finds its way to Muangthong midfielder, Wattana, who is left with with a simple tap-in. Aris throws his arms up in the air possibly to complain about a push in the back but no one else joins in the protest and the ref isn't interested either.

Samut Prakan play some nice football in the first period but can only create half-chances, Teerapol Yoyei coming closest with a header that the Muangthong keeper tips over the bar at full stretch.

Muangthong fans will say they could have been three goals up at the interval and I wouldn't argue. Ex-Samut Prakan favourite, Picha Autra, takes a break from snapping at everyone's heels to smash a shot against the crossbar and the home side miss an open goal sitter on the stroke of half-time.

The ineffective Jiraaut Wingwon is replaced at the break by another Samut Prakan youngster, Apichai Munotsa. He doesn't offer much but I'd like to see Samut Prakan's possession stats for the second half because as a team, we saw an awful lot of the ball. The build-up play and passing between midfield and attack was a joy to watch but there was no real end product. The fans watching on TV at home had only half chances to get excited about.

In the end, that early Muangthong goal proves to be enough and Samut Prakan bow out of the competition at the identical stage to last season. (Match highlights) 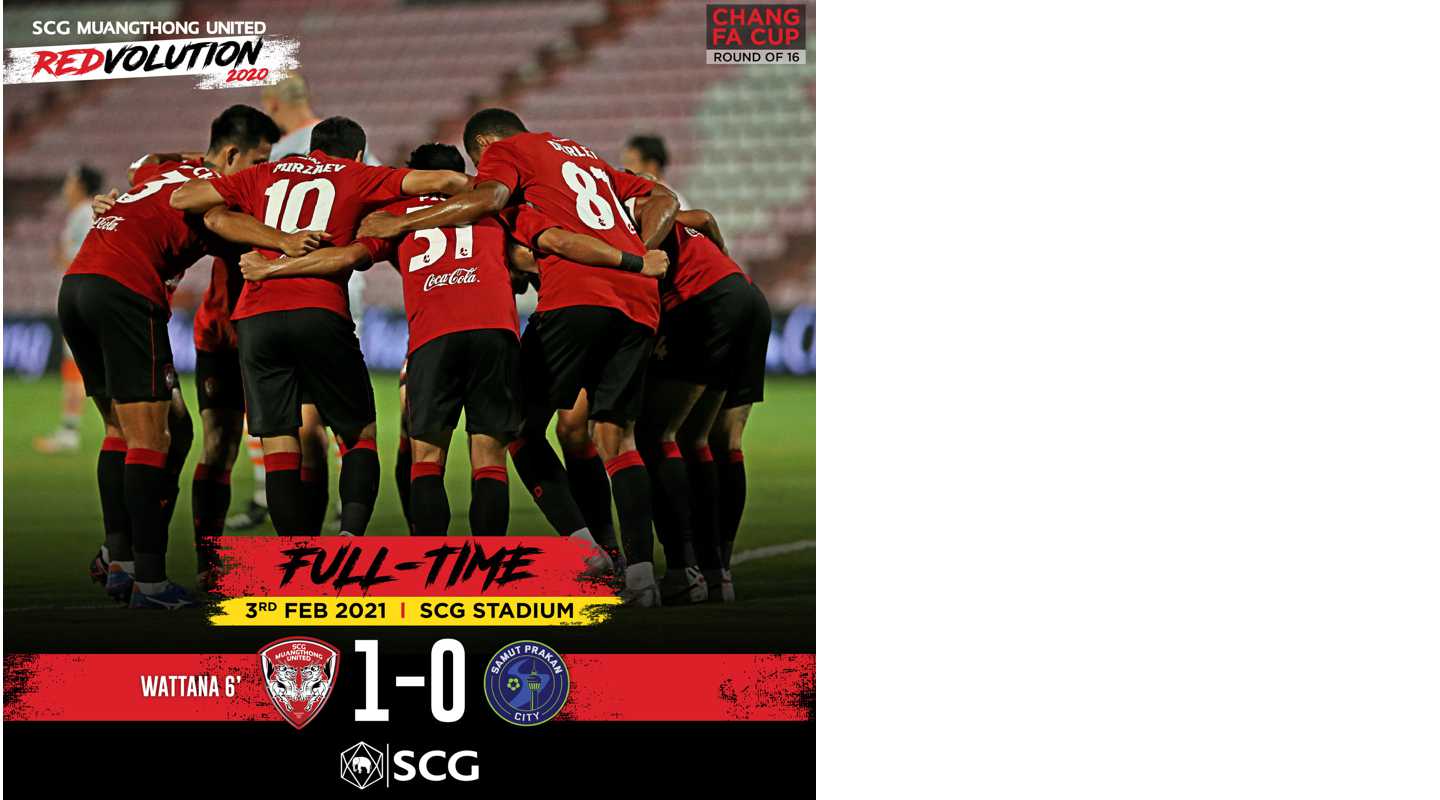 Talking to Grant, a Muangthong fan, on Twitter after the game, he said 'Tardelli would've made a difference tonight'. I think he was spot on with that comment. We needed someone with an eye for goal and a bit of composure in the penalty area. Tardelli would've provided that. Much of our midfield and attacking play was excellent tonight but we just couldn't score.

I feel disappointed that we're out of the competition but we gave it our all. I can't fault the manager's approach to the FA Cup this season. It was a competition he clearly wanted to win.  However, it was not to be and with no further FA Cup fixtures to look forward to, our season will now end on the 28th March.

We are away to Bangkok United this Sunday (7th February) and then the following Wednesday (10th February) we welcome Police Tero to the SAT Stadium.

Any chance of getting in to either of those games?

The number of Co-vid infections is coming down steadily but I'd say there's no chance of allowing fans into Sunday's match and despite the government saying they'd revise restrictions soon, I don't hold out much hope for Wednesday's home game either.