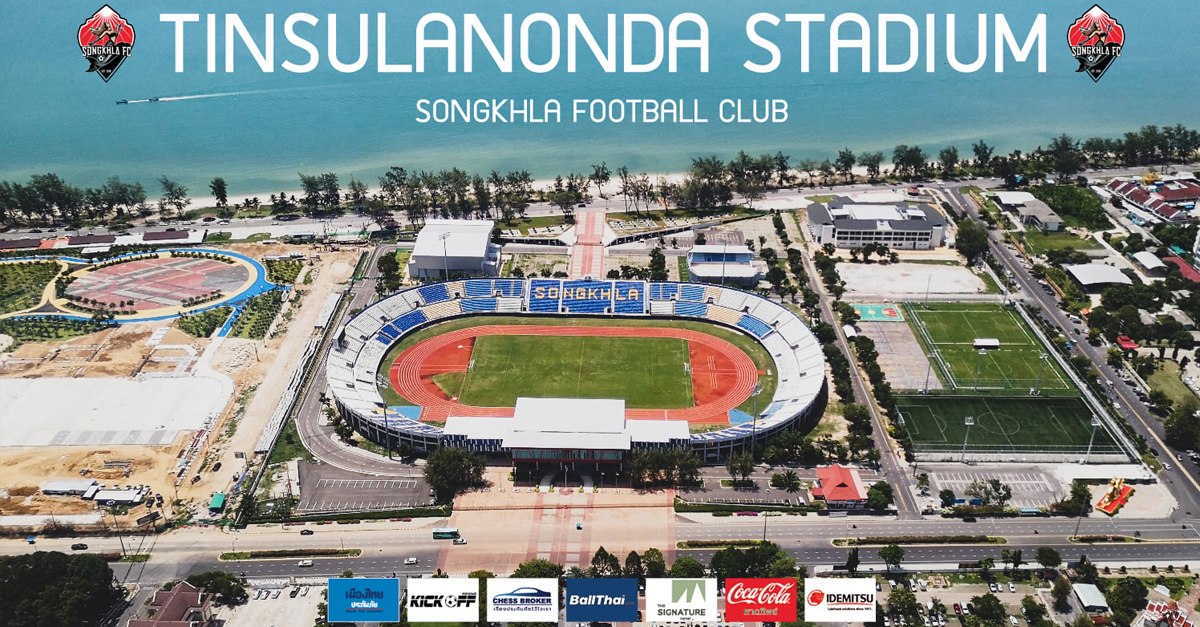 We're looking forward to this one?

You bet! I mean what's not to love? A chance to see a new football ground in a Thai city that I've wanted to visit for a long time. This is Southern Thailand and yes, it requires getting on a plane and yes, it's one of the more costly away trips - but it has to be done! There was never any chance of me missing out on this one.

Tun and I will fly from Bangkok to Hat Yai on Tuesday, see the match on Wednesday evening, then have another day just poking around Songkhla as tourists on the Thursday before returning to Bangkok the day after. I guess this is one of those great opportunities to turn a football match into a mini-break at the same time - so why not take full advantage.

It looks a hell of a stadium?

Well, there aren't too many football grounds just metres from the beach and the ocean. According to Wikipedia, the Tinsulanonda Stadium holds 47,000 (one of the largest stadiums in the Thai League) but I've heard figures banded around as low as 34,000 due to modernisation and seating arrangements. Whatever, it's still a big old ground.

Songkhla FC are a semi-professional club and currently play in the third division south. At the time of writing they are third in that division and have lost just one of their 16 matches so far.

It's a shame to see them 'languishing' in Thai football's third tier because they have the potential to be a massive club. Last week in the Thai League Cup, over 13,000 fans turned up to see them take on premier league big boys BG Pathum (a game that ended in a 4-1 defeat). Hopefully things will change with promotion to the second division and who knows, maybe a place in the top flight before too long. The Similan Mermaids would surely make a wonderful addition to the premier league.

Songkhla FC have been around as a club since 1999 and made it as far as the second division ten years later. In 2010, they missed out on promotion to the top flight by just two points and then disappointingly lost out in the play offs. Around this time they also achieved their highest ever attendance - 36,715 for a home tie with Buriram. 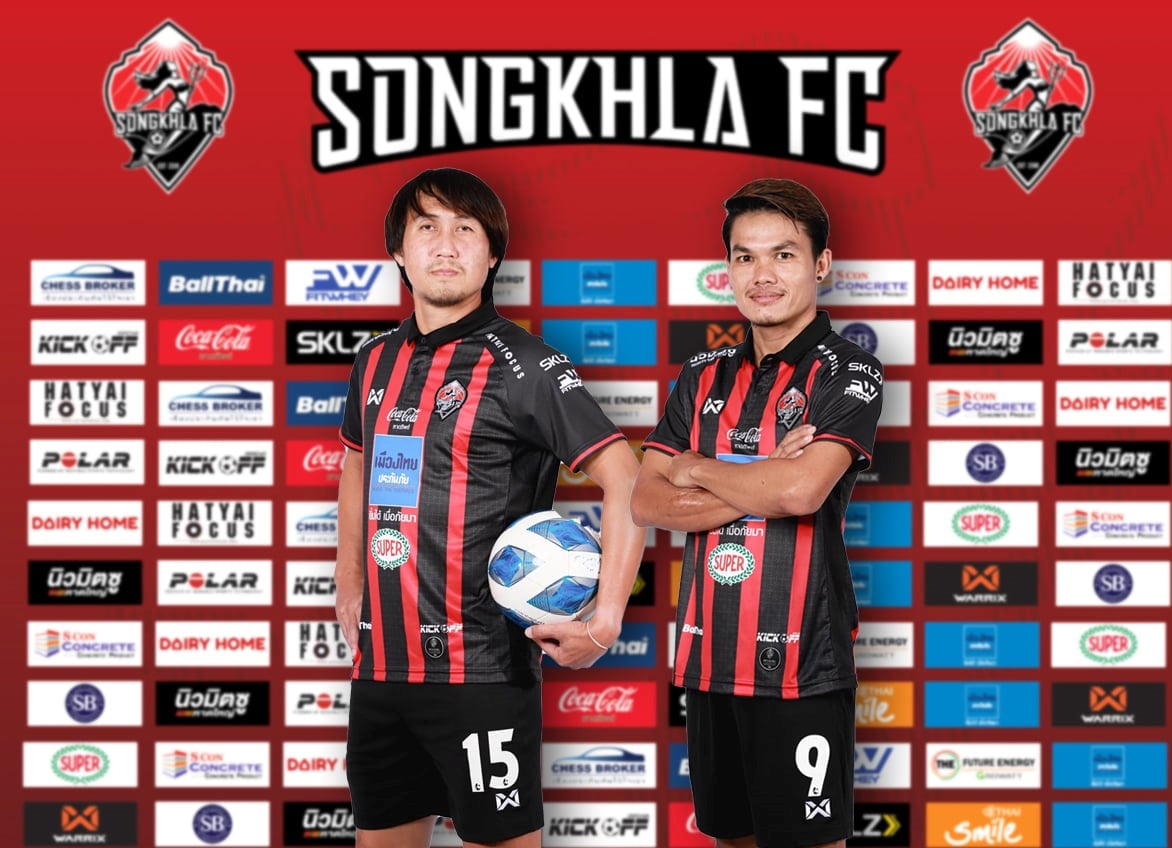 Yes, I was surprised to learn that Nopparat Sakul-oad (left in the above picture) is now at Songkhla United. The popular Nopparat made almost 40 appearances for Pattaya United / Samut Prakan City. If memory serves me correct, he even captained the side several times. After leaving Samut Prakan in 2019, the 35-year-old midfielder had spells at several clubs including Air Force Central in the second division. A player now very much at the tail end of his career it would seem.

Victory against Songkhla would mean a place in the quarter finals and the furthest we've gone in the competition.

Last season we went out in this round in a closed-doors 1-0 defeat at Muangthong. The season before, we were eliminated 3-2 in a very disappointing loss to second division Thai Honda (now defunct)

I just have a feeling that Samut Prakan will field a stronger side than the eleven who started against Pluaekdaeng United in the league cup last week, and will want to give this competition a real good go.

Our Thai Smile flight from Bangkok Airport actually took off 10 minutes ahead of schedule and we landed in Had Yai an hour later. From Had Yai Airport to Songkhla town, the drive is about 45 minutes. For 700 baht we had booked a private hotel shuttle to come and collect us but I noticed as we wheeled our small suitcases through the departure lounge, you can also book an airport taxi for 660 baht. 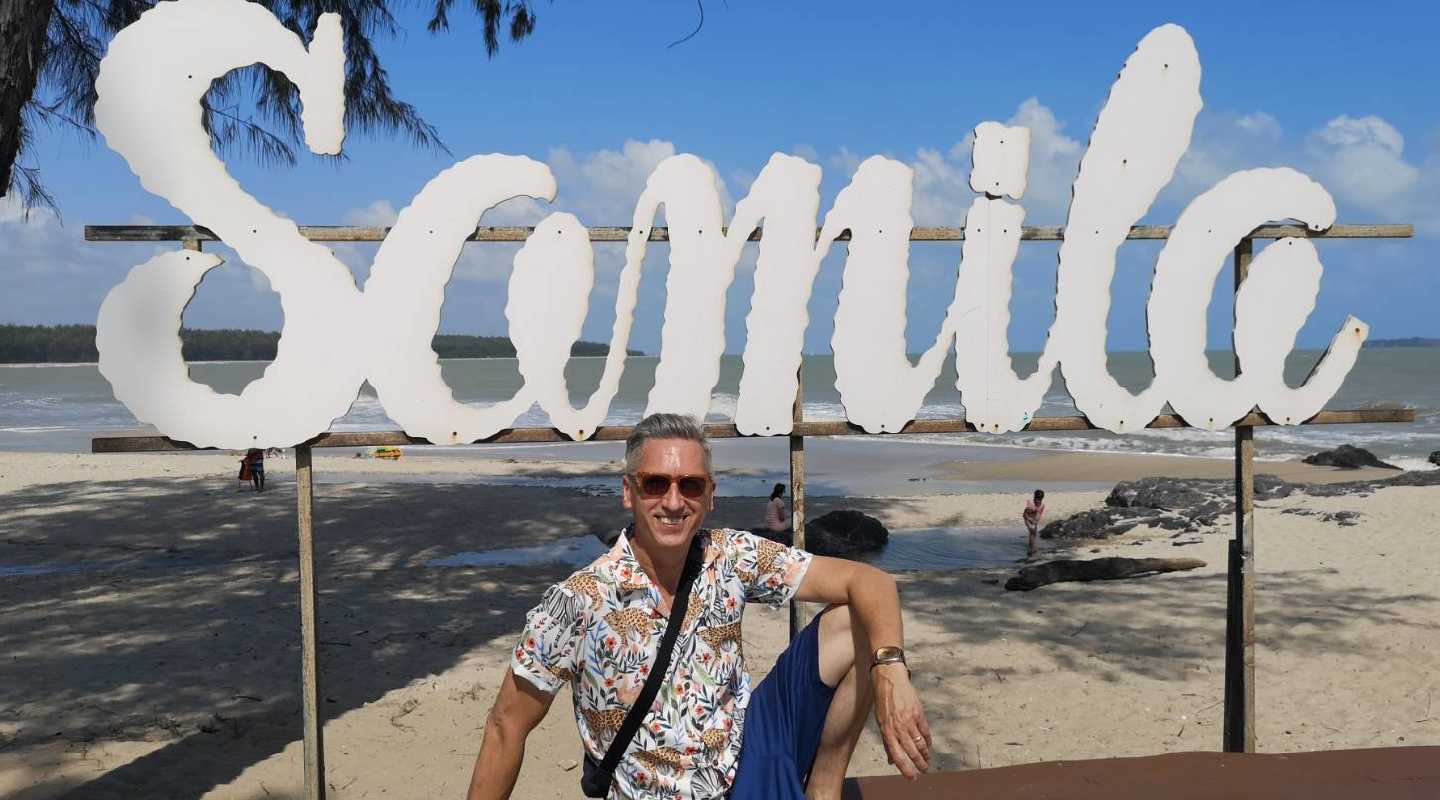 With a lot of football travel coming up in the next couple of months, we wanted to keep costs down to a reasonable level so opted for the 3-star Club Tree Hotel in the centre of town. We paid around 800 baht a night and while it had some lovely touches (a piano lounge with a free coffee machine certainly one of them) the management was a bit dozy and unable to answer even the most basic questions about eating out or getting around Songkhla, etc. The room itself was OK but as Tun said 'it wasn't worth a penny more than 800 a night' 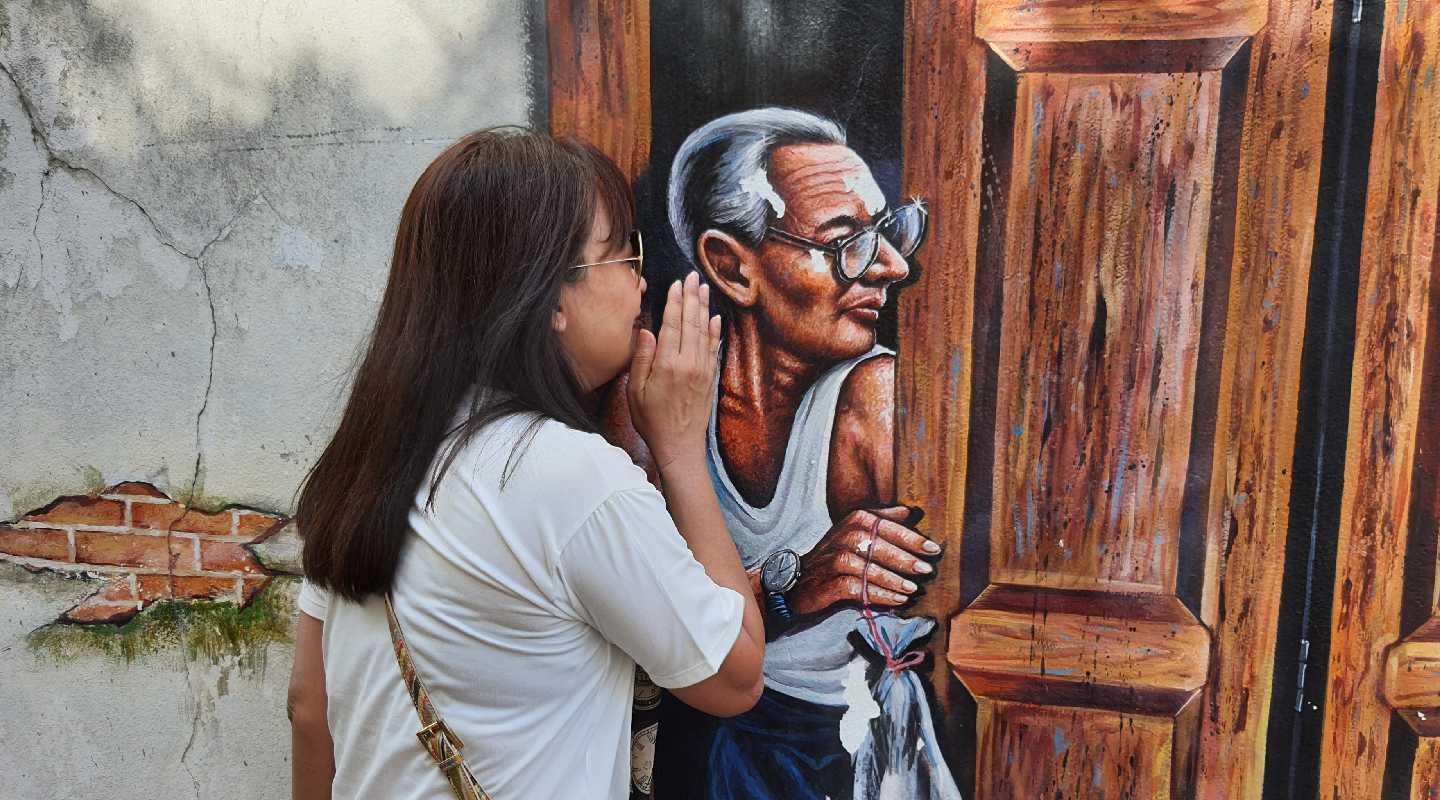 (One of Songkhla Old Town's biggest draws is the street art)

What about killing time in Songkhla?

You really have only two options when it comes to killing serious time in this town. Firstly, the beach front area which stretches from Chalatis Beach up to the more famous Samila Beach (and the must-see golden mermaid statue). It's pleasant to just grab a snack or ice-cream from one of the many vendors and sit on the beach or rocks and watch the waves roll in. Secondly, you have Songkhla Old Town, a network of half a dozen streets packed with quirky, fashionable coffee shops and restaurants - and home to enough street art to revive even the most jaded instagrammer. 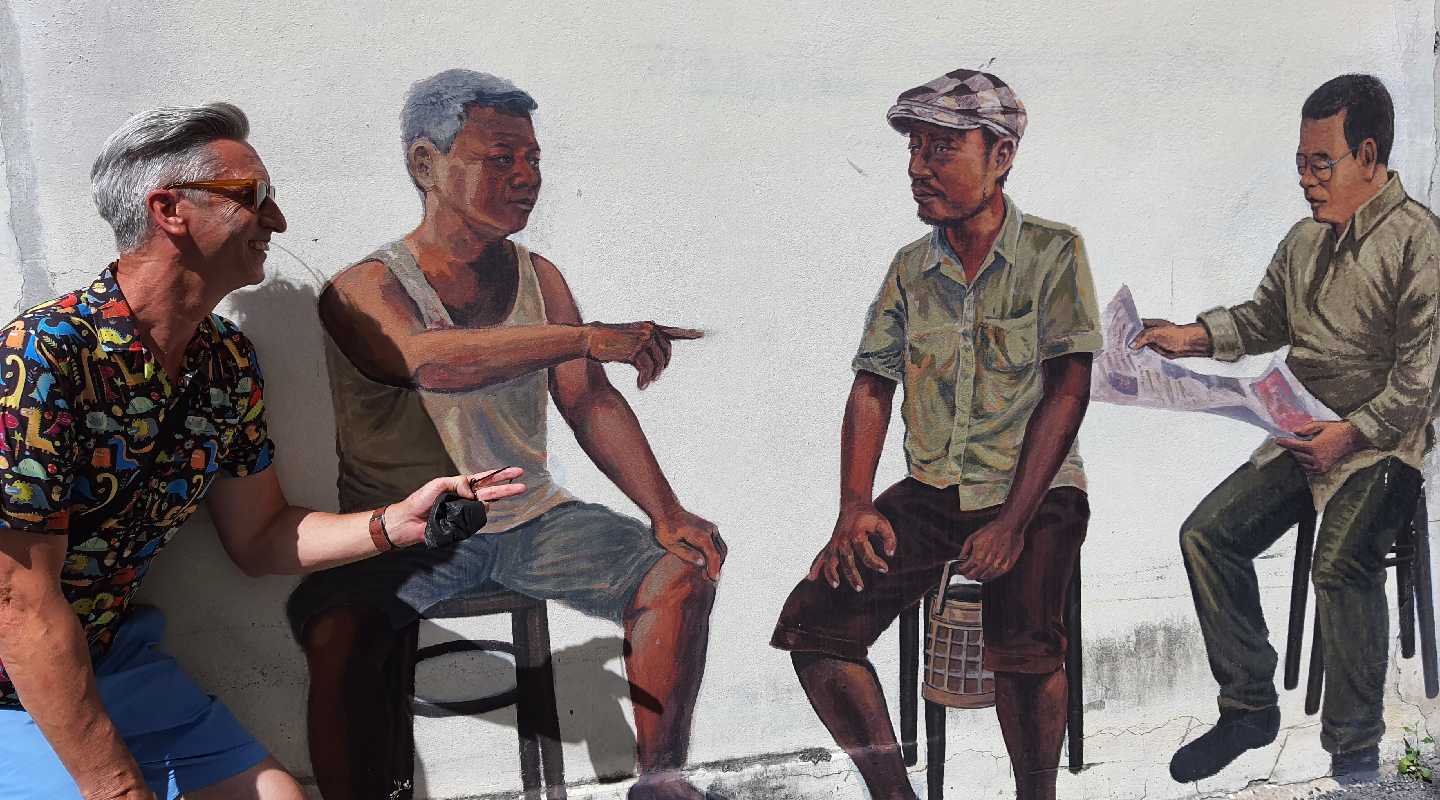 We spent a lot of time in both neighborhoods - the seafront and the old town - and given the chance to visit Songkhla again, we would probably choose a hotel nearer or actually in the old town. It's a livelier area by Songkhla's generally peaceful standards.

Songhkla for the most part is a beautifully kept and spotlessly clean little town. Getting around on foot would be a breeze if it weren't so hot during the day, so much better to flag down a songthaew (easier said than done because they aren't that plentiful) and pay the flat fare of 20 baht per person. 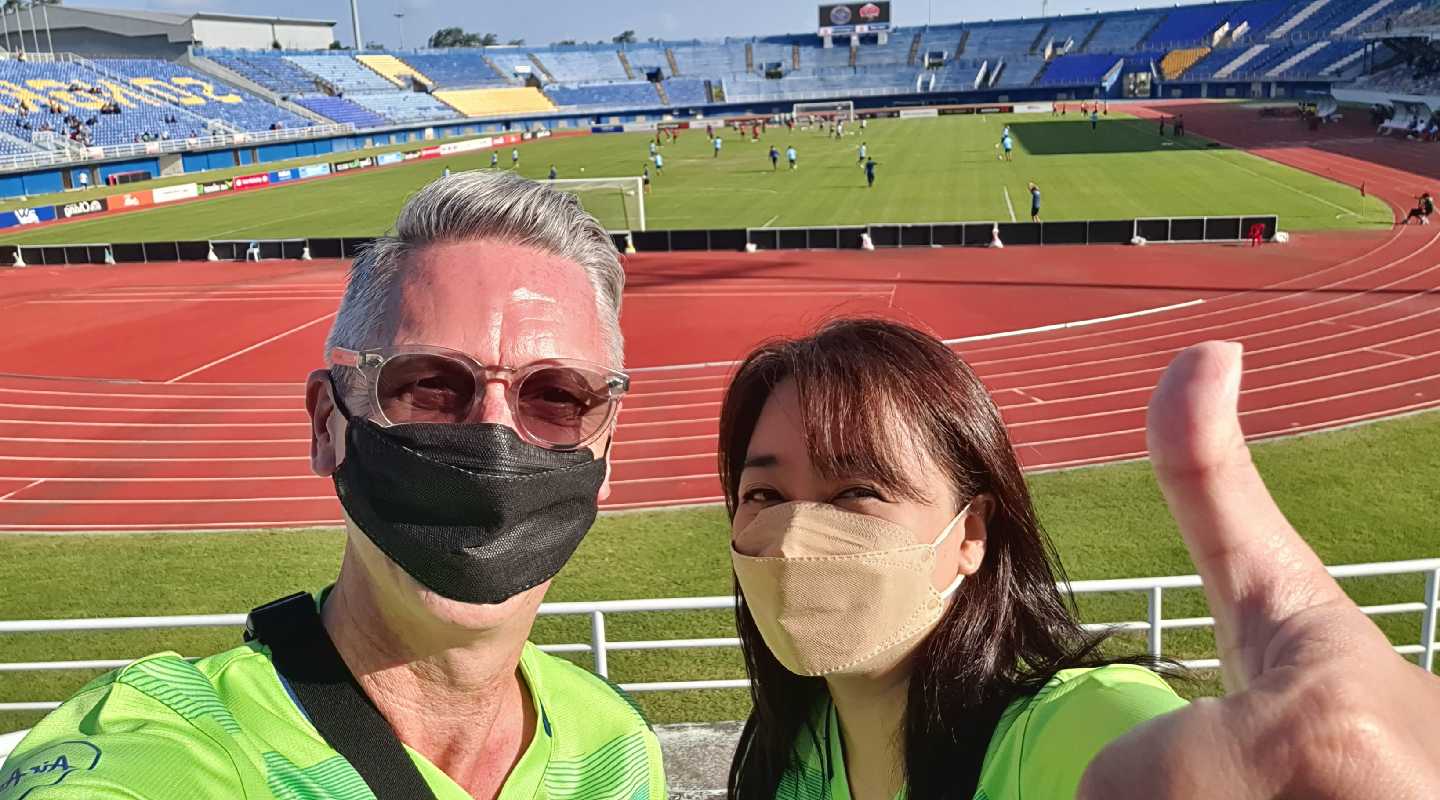 OK to the football match itself. Did the Tinsulanonda Stadium live up to expectations?

Firstly, a word about the staff - from the girl who pointed us in the direction of the ticket booth to the security guys and the vaccine certificate checkers - they were among the frendliest and most welcoming people I'd encountered at a Thai league ground. It was as if they appreciated how far we had travelled and were delighted to have us as their special guests.

The ground itself reminded me of Suphanburi's Provincial Stadium - the same sort of size, with three open sides, a running track, a distant away end, and plenty of areas that could have done with a good scrub.

Well, the attendance of 2,163 was a disappointing far cry from the 13,000+ that came to watch BG Pathum the week before but the home fans in the main stand still generated a decent noise, particularly in the second half.

The manager opted for pretty much a second string eleven with a sprinkling of first-teamers - Pathiwat in goal, Aris Jarifovic in defence and Daisue Sakai in midfield.

Yuto Ono, Samuel Rosa and defenders Chaiyawat and Suphanan were all named as subs in case the going got tough and we needed the cavalry.

Awful. Truly dreadful. I can't remember a clear-cut chance by either side. The Samut Prakan defence dealt easily with the Songkhla attacks but couldn't create anything meaningful at the other end, At half-time and with the match goalless, the manager decided he'd seen enough and on came the big guns - Yuto Ono, Samuel Rosa and Suphanan.

Samuel Rosa limping off injured after a 13-minute cameo certainly wasn't in the script and although we played better in the second period, we still couldn't find that one clinical match-winning finish, and were it not for a couple of smart saves from Pathiwat in the dying minutes, Songkhla would've wrapped it up in the ninety. But the ref's whistle blows and we've taken the team from the third division south to extra time (said with more than a hint of sarcasm)

Into extra time we go and as we tick down to 116 official minutes on the clock, somebody has to win this for Samut Prakan because we do not want penalty kicks. Please, not penalty kicks! And bugger me, we've done it! with just four minutes of extra time remaining, Chaiyawat Buran has sidefooted it cooly past the Songkhla keeper and makes that cupped-hand-around-the-ear gesture. Oh the arrogance and the self belief. We are into the quarter finals of the FA Cup! Except we aren't. From the re-start, Songkhla take the ball down the other end and equalise. The crowd go fucking mental, well the Songkhla supporters do. The travelling Samut Prakan contingent just stare at each other in disbelief. We are going to penalties.

Ten Songkhla players then step forward to take ten of the finest and most clinical spot-kicks you've ever witnessed. Pathiwat barely gets a fingertip to any of them. And then with both teams well into sudden death, Noppon Ponkham, Samut Prakan's captain on the day, fluffs his lines and shoots tamely at the keeper. Samut Prakan are out of the FA Cup.

To go out of the FA Cup at the last 16 stage for the third season running is disappointing enough, but to lose to a third division side makes it even harder to swallow. I'm not sure that sending out a reserve team and bringing on a few first-teamers at half-time was the right strategy. I guess it depends on whether we are interested in FA Cup progress or not (and why shouldn't we be?) Anyway, we're out of the competition and I suppose it's time to focus on premier league survival.

Despite the result, it was nice to spend a few enjoyable days in Songkhla though and see a little more of Thailand. 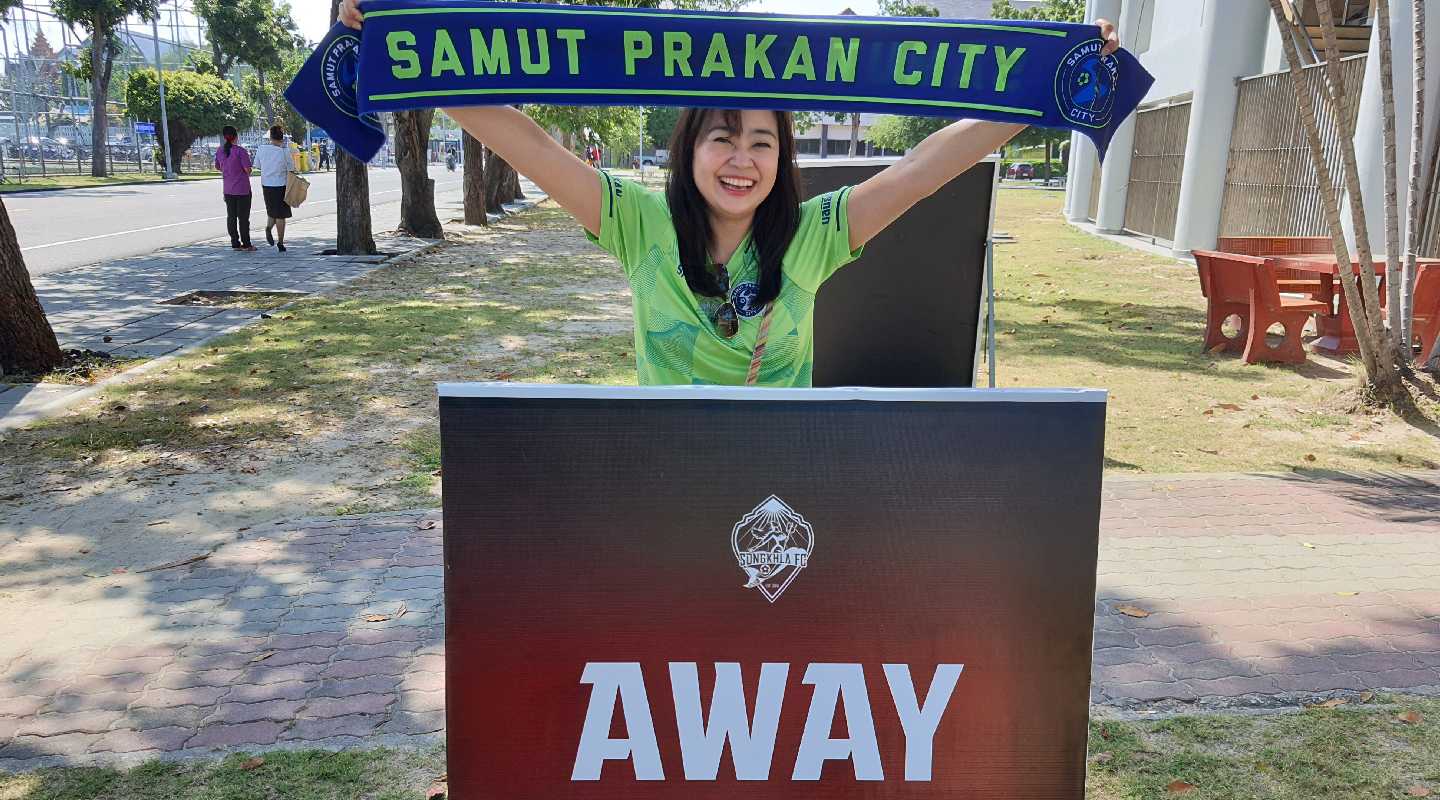 It's back to premier league action and we have a home game against Police Tero this Saturday 22nd January, kick off 5.30pm. With Samut Prakan now in the bottom three and Police Tero just five points above them, it's a massive game for both clubs.