I've been inspired to put some thoughts down on paper since I found out that the madcap ball of energy, Nicola, has left Thailand after seven years of teaching young children here.

Thailand should be hunting down people like Nicola, begging them to stay and showering them with incentives to do so. But it isn't and she's gone. Grrr!

After the annoyance of that news had subsided, I began to think about why some of us are teaching in Thailand and more importantly, why we stay around for so long doing it.

I've isolated the most compelling reasons why people teach long-term in Thailand and there are four of them as far as I can see...  we like doing it, we can do it, we get paid for doing it, and 'purpose'. The variance of each of the four reasons will differ from person to person, but here's a pie-chart that you could fill in... mine is below. 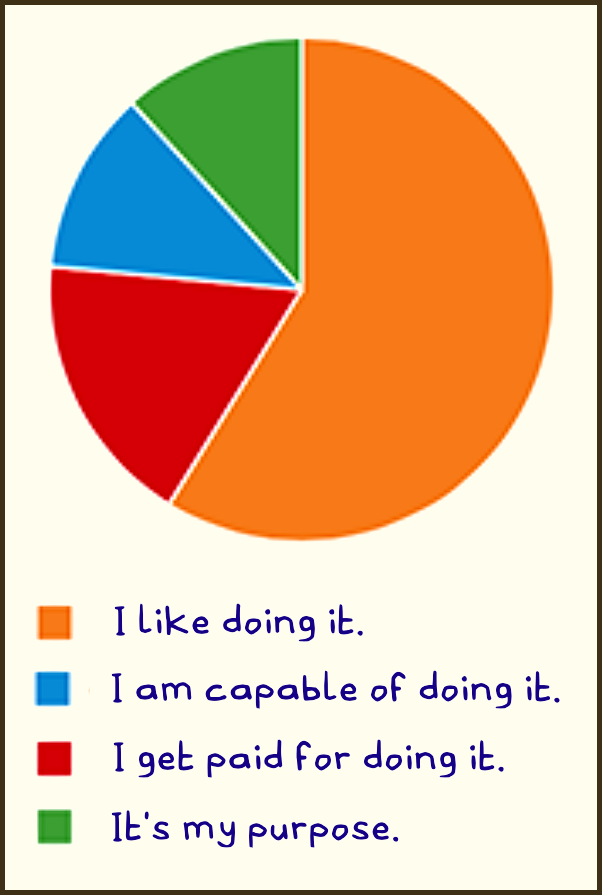 I've tried to be honest about this self-assessment and, rather shamefully, the green bit isn't as big as it should be! But it's inching bigger each year as I grow older and my 'need' to teach as a source of income diminishes. Anyway, let’s go through the four reasons with the emphasis on the last one.

I was a waiter for many years in America at places like The Olive Garden, Chilis, and The Outback. It's an unbearable job if you don't like being a waiter or you're just 'not in the mood' on any given day. In this particular field of endeavor, attitude is everything and it's your attitude which generally determines your income, too.

The same goes for being a teacher. It's a 'social' job. You’re continually interacting with students, parents, other teachers, and your bosses. It's a bloody hard slog if you are watching the clock on the wall and don't want to be there. If you do like being at work, the days go by in a flash and before you know it, it's Friday again.

Although teaching is a social job, there's also a lot of 'independence' when you’re an educator. We can be creative in how we teach and no two educators will do the same job in the same way. The work week can be an adventure and a joy.

For most of us (me included), there’s a middle ground. I love my job and the idea of doing something genuinely useful with my time, but I can’t (wouldn’t) do it for free and I need to be rewarded in ways that will support my life outside the school.

Reason number two - we can do it.

Anyone can teach the English language in Thailand. I'm surrounded by teachers who teach English yet can't speak it. They are Thai teachers, of course, but this nation also hosts thousands of other non-native English speakers as English language teachers, too.

Anyway, an important factor in deciding what work we do is our ability to do it. For some, it's a gift and for others, it's a skill that is learned. For most of us, it's both of these things. Thailand is very forgiving in this regard and many people - like me - have learned their skills ‘on the job’ so to speak!

Reason number three - we get paid for doing it.

Not many of us are in a position to work for free so this is an important factor in deciding what we choose to do for a living. While a few of us are well paid at prestigious 'International' schools, I'm guessing that most people reading this are earning between 30,000 and 60,000 baht a month. If the money is a big reason why you go to work, you're probably not thinking of teaching English in Thailand.

With the issue of money and salaries being the single biggest talking point on forums like this, why are there tens of thousands of awesome foreign teachers working ‘up country’ and not earning the big bucks? Which brings me to the final reason we work...

The transition from ‘selfish’ to ‘selfless’.  One of the most shattering things we can do in our lifetimes is to take on the responsibilities of getting married and being a parent. It's probably the most extreme example of being selfless. Everything you do impacts the lives of other people. Your own life is literally not your own anymore.

For many people, this abandonment of previously self-serving ways extends to their professional lives, too. Medical doctors are an example of this. Becoming a doctor is expensive, difficult, takes years to do and requires enormous reserves of motivation to achieve the ultimate goal of ‘making the world a better place’.

The ‘transition’ to a degree of selflessness may start at any time of your life and can take a further lifetime of effort to maintain. Doctors are probably brought up to believe that giving to the world is an important part of their spiritual existence. They start young. Recovering addicts and previously selfish people may find their charitable calling later in life. Many won’t ever feel the need or desire to do something selfless.

The teaching profession attracts virtuous people who have an instinct to make the lives of young people better. Unfortunately, in most countries, you'd have to be an actual real live saint to maintain this altruistic energy over the lifespan of a career. Educational systems around the world have different weapons that they can use to beat the enthusiasm out of you and the Thai education system is no exception.

So many great teachers here

Are there teachers here in Thailand who are motivated by the will to make the lives of Thai citizens better? I believe there are lots of them. They're everywhere in the Kingdom. They don't brag about their reasons for being here on public forums... especially Thai public forums which are mostly polluted by people like me!

Unfortunately, like Nicole, they aren’t given enough good reasons to stay in Thailand and make a long term career out of it. Although, in Nicole’s case, seven years is a bloody good chunk of your life!

These are overused, cheesy cliches but whether it’s your intention or not, if you are a foreigner teaching English in Thailand, you are... ‘shaping young lives’, ‘giving to a community you call home’ and ‘making the world a better place’.

And before you throw up, consider this… even if you aren’t a perfectly noble person with totally selfless reasons to teach, if you enjoy being in the classroom, you are making the ‘system’ of Thai education better just by being here. That thing that you complain about every day...it’s a little bit better because you’re a part of it!

I’m not a good enough person to work solely with the aim of making the world a better place. The green area of the pie chart in the image above would have been non-existent when I first came here. I took on teaching because I desperately wanted to stay in Thailand and had no other marketable skills. But with time, age, maturity and some effort, I started to take the job more seriously and began to understand what the consequences of me being in a classroom meant to people other than myself.

So, where do you stand in all of this? What are your motivations for choosing Thailand as a place to work and live? Whatever they are, it’s very likely that you’re doing more good than you realize.

I second every letter in this article. Thanks Mark.

As mentioned under 'we like doing it', the writer refers to the social aspect of teaching but also the element of independence. The element of autonomy in the teaching world was what made appeal to me compared to other (employee style) careers.
The freedom to shape the class how you want it, to plan with students for future events, group discussions, mock exams and much more made TEFL an interesting and fun challenge.
However, in Thailand, especially in the full time government school field, this is often taken from one - or narrowed down to the mantra that one must 'follow the book' but taken literally as in, page by page. After that, students are examined on the contents of a book, rather than on their level of English. This makes teaching a low level skill that can be picked up by anyone with a bit of confidence and native English.
It is a great pity, especially for the students on the receiving end, and can reduce the number of skilled teachers who want to stay here.

Excellent, well-written and refreshing article. I really do enjoy teaching; it's rewarding and I don't find it stressful. But money matters too. With some effort and determination at what began as a fledgling language school, the pay has exceeded my expectations. I live comfortably.

Good article, I could relate to the feelings and motivations expressed.