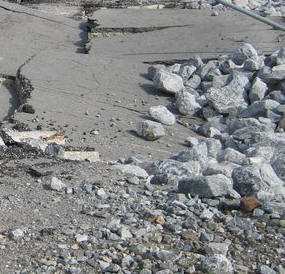 Has anyone had the misfortune to stroll down Wittayu Road recently? Well 'stroll' is probably not the correct word to use - it's more of a limp and a hobble if truth be told. I'm talking here about the Sukhumwit end of Wittayu Road with the lush compound of the American Embassy on one side of the street and that untidy hotch-potch of food-stalls and fly-by-night translation businesses on the other. It's never been the most pleasant of walks, whichever side of the road you choose, but at the moment there are extensive footpath repairs in progress and the whole area resembles a war-zone. It's horrible. I ambled down to my local bank this week, opposite the Conrad Hotel, and walked most of the journey in the face of oncoming traffic. You couldn't negotiate the footpath itself unless you fancied going arse-over-tit into a sand dune or falling down the infamous Bangkok pothole. Why oh why does the Bangkok pedestrian constantly have to put up with being treated like a third-class citizen? Why should cars have priority over me?

Of course all this is nothing new. Thais have been digging up the footpaths and endangering the lives of pedestrians for donkey's years. I remember a student telling me a long time ago that the major problem is none of the utility companies consult each other. The electrical company might dig up a stretch of footpath to lay a new underground cable (or do whatever electrical companies do) and after they've returned the footpath back to a reasonable state, along comes the water company to dig it all up again. Six months later, and the electrical company decide their original work could probably be improved upon. The result - a stretch of footpath in almost constant upheaval. And all the pedestrian can do is smile through gritted teeth as they twist an ankle for the third time that week. Complain? Well you could do - but frankly no one gives a shit. That's if you knew who to complain to in the first place.

It's not always the fault of the utility companies though. Sometimes paving stones are dug up and replaced purely for cosmetic reasons. I'm all in favor of making the city look more appealing but I'm also a believer in if a job is worth doing, then it's worth doing well. You've probably seen the gang of Thai laborers mark out an area of footpath in readiness for a paving stone makeover. They'll set about the task with bits of string and measuring tape. Some of them even look as though they've got the right tools. Six months and a few heavy rainstorms later, the whole foundation layer subsides and you're left with a concrete ripple effect with every stone or slab sticking out at a jaunty 45 degree angle. Soi Thonglor (Sukhumwit 55) is a fine example. No wonder the motorcycle taxis that ferry people from one end of the soi to the other do such a roaring trade.

The whole footpath and re-paving conundrum is rather like Thailand in a microcosm. It's a kind of 'organised chaos' - the begrudging acceptance of second-class results with little or no regard for the end user. All I'm saying is surely there's someone somewhere in the this kingdom who knows how to lay a proper footpath.

While we're on the subject of 'expat gripes', I took my wife out for lunch last Saturday, funnily enough to Soi Thonglor and a fairly up-market restaurant called Vanilla. I'm told it's owned by the S&P chain of restaurants but we're thankfully spared the display stands of tasteless bakery items and processed cold meats that are part and parcel of its mainstream outlets. Vanilla is tastefully decorated in an old colonial style and at about 700 baht a head for a main dish and dessert, it certainly falls into the category of mid-range eatery. At just after midday on a Saturday there were surprisingly very few diners in there. This however didn't stop the waiters making a complete balls-up of every single order. My wife got the wrong dish twice, and a Thai woman dining with her husband on the next table managed to send three meals back to the kitchen before she eventually got her spaghetti and clams in a neapolitano sauce. Now this kind of chaos I don't mind so much because watching each waiter come out of the kitchen, stand in the middle of the restaurant, and try hard to guess who the dish he was holding belonged to, was both amusing and entertaining. It was a bit like watching Manuel in Fawlty Towers but with six waiters all playing the role. All this aside, what really gets my goat in Thai restaurants is when your partner's meal arrives ten to fifteen minutes before yours does - as was the case today. We recently held a poll on the ajarn discussion forum and asked members what was the single-most worst aspect of dining out in Thailand. Meals arriving at different times stood out as easily the most common gripe. To be honest I've come to expect it in lower-priced restaurants but I find it hard to swallow in a place where you're handing over the best part of 2,000 baht for nothing more than a quick lunch. As my wife and I paid the bill and left the restaurant, I turned to her and said "do you know what? We must do this again next year"