It's just a ten-minute walk from my house to the local gym.  In fact I can do it quicker than that if I get a move on.

Yet even in that shortest of walks, I encounter almost every hazard, peril and obstruction that your average Bangkok pedestrian knows only too well and confronts on a daily basis.

This is a photo summary of that ten-minute walk and highlights why walking in Bangkok is for the foolhardy - and probably always will be.

Take my hand, come with me, and let's skip gaily as we go! 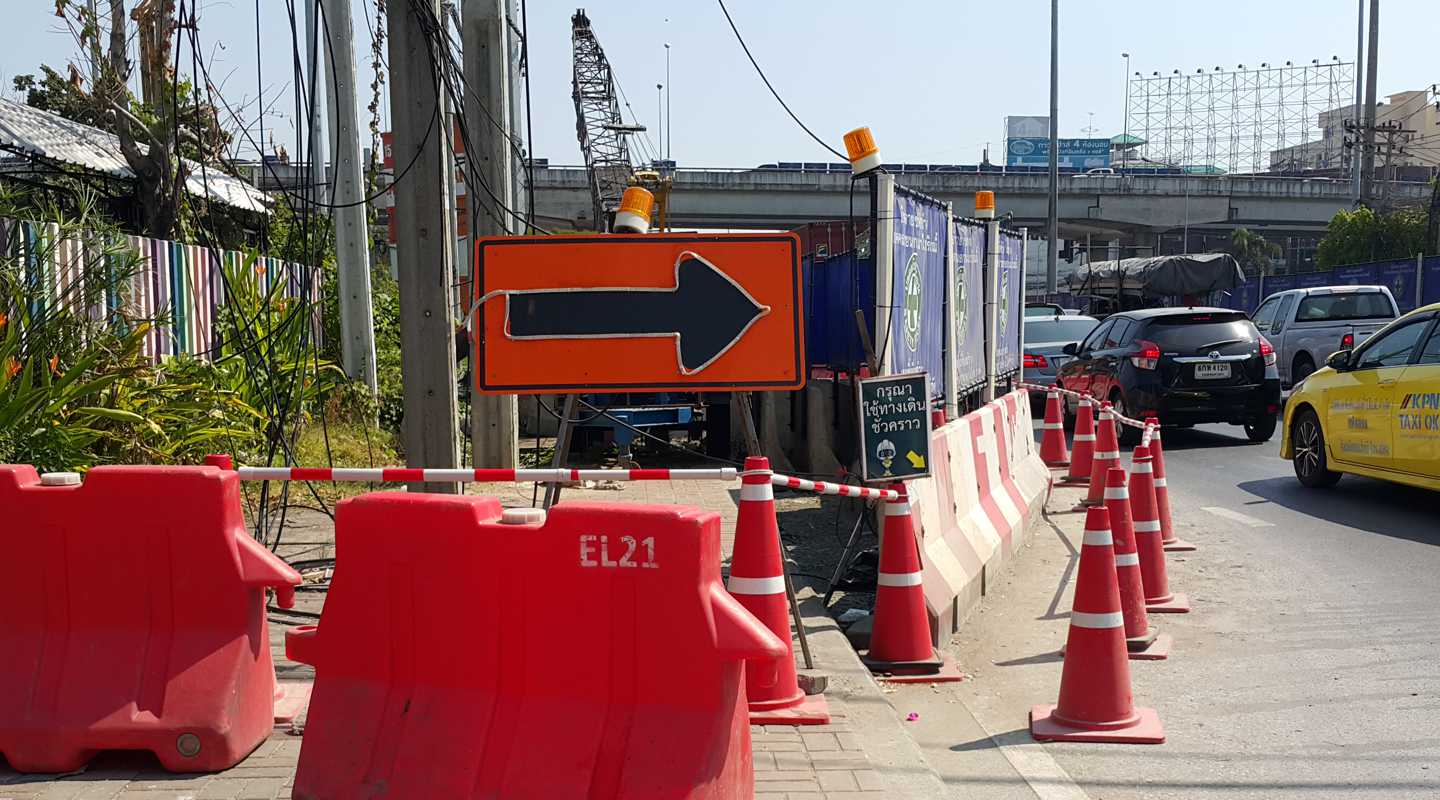 Shortly after leaving my house, we approach the busy intersection of Theparak and Srinakarin Road.  This is where the 'yellow line' (a monorail system) will eventually sweep left around the corner and make its way up Srinakarin - so there's a whole lotta construction going on!

Credit where it's due, things get off to a decent start. The construction company has arranged a clearly-marked, pedestrian walk-way using lightweight, plastic traffic cones. But what you are seeing in the photo is how the walk-way looks at the beginning of rush hour, after a construction worker has been given the job of neatly spacing out the cones.

As the day wears on, a very different picture emerges as motorcycles and cars unintentionally nudge or 'kiss' the traffic cones as they pass. This results in the walk-way becoming so narrow in places as to become virtually impassable. The whole system relies on fine, upstanding citizens like myself (and my Aussie pal who walks the same way to the gym) putting our foot up against the cones and kicking them back into place.

Of course, in a perfect world, there would be a construction worker assigned the task of checking the walk-way every hour or so and making sure pedestrians are kept safe. But this is Thailand and 'pedestrians' and 'safe' rarely belong in the same sentence. 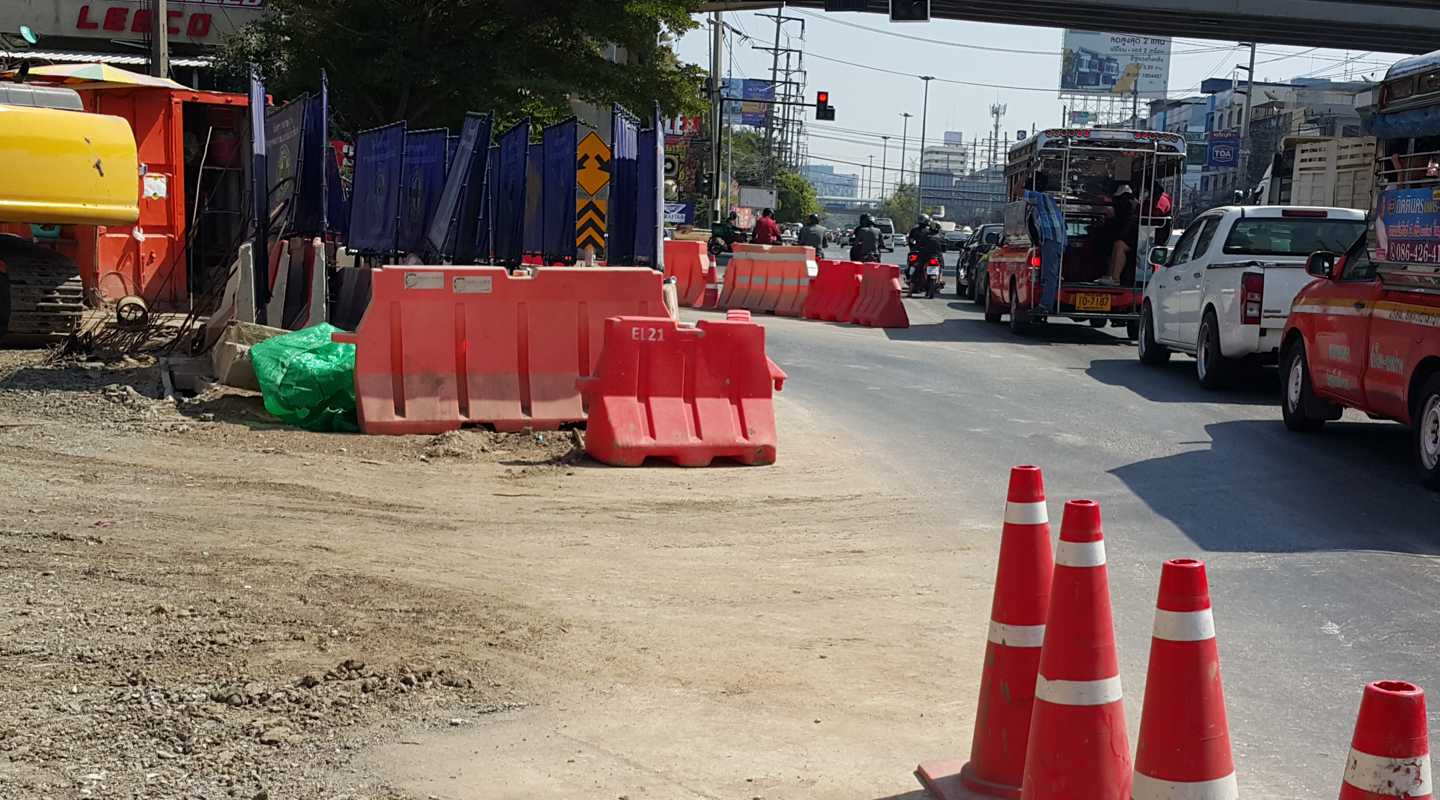 Once you get to the end of the walk-way, this is where it gets dangerous and you have a tough decision to make.

Do you veer left of those red, plastic barriers and without a stitch of protective clothing, make your way through the construction site, walking under swinging cranes and stepping over potholes (you'd be insane!). Or do you do as you are meant to do, and negotiate that busy street corner without the help of any kind of pedestrian walk-way, and basically find yourself walking in the middle of the road as cars, motorcycles and lorries come hurtling around a blind corner?

It's worth pointing out that there are numerous industrial estates in this area and all manner of trucks and heavy goods vehicles fly along these main roads. 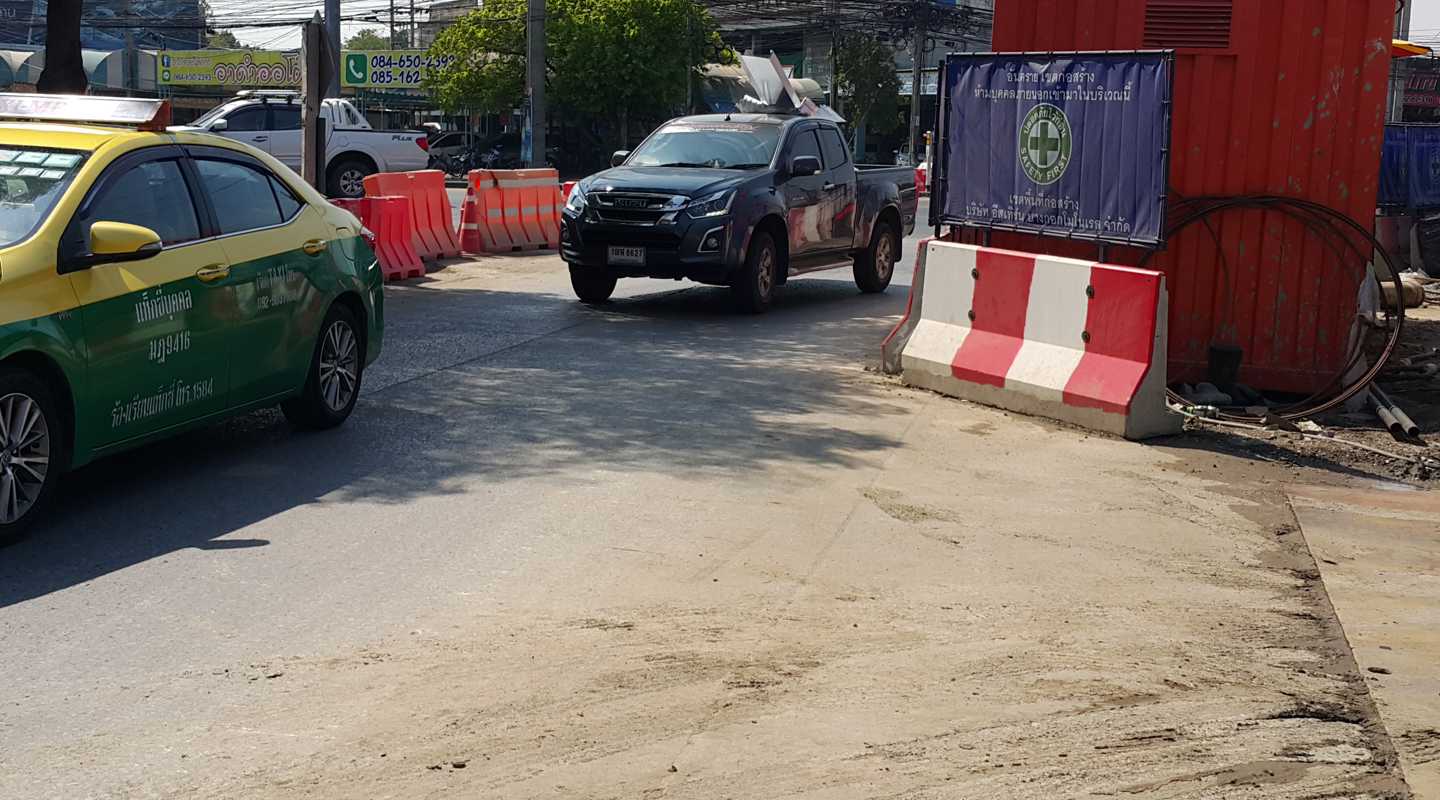 The picture above shows where you are once you have walked, run or sprinted hell-for-leather around that blind corner.  Cars can generally see you but it's always the motorcyclists that worry me.  All it takes is one helmet-less, uninsured, underage teenager to clip you with his wing mirror and send you flying. 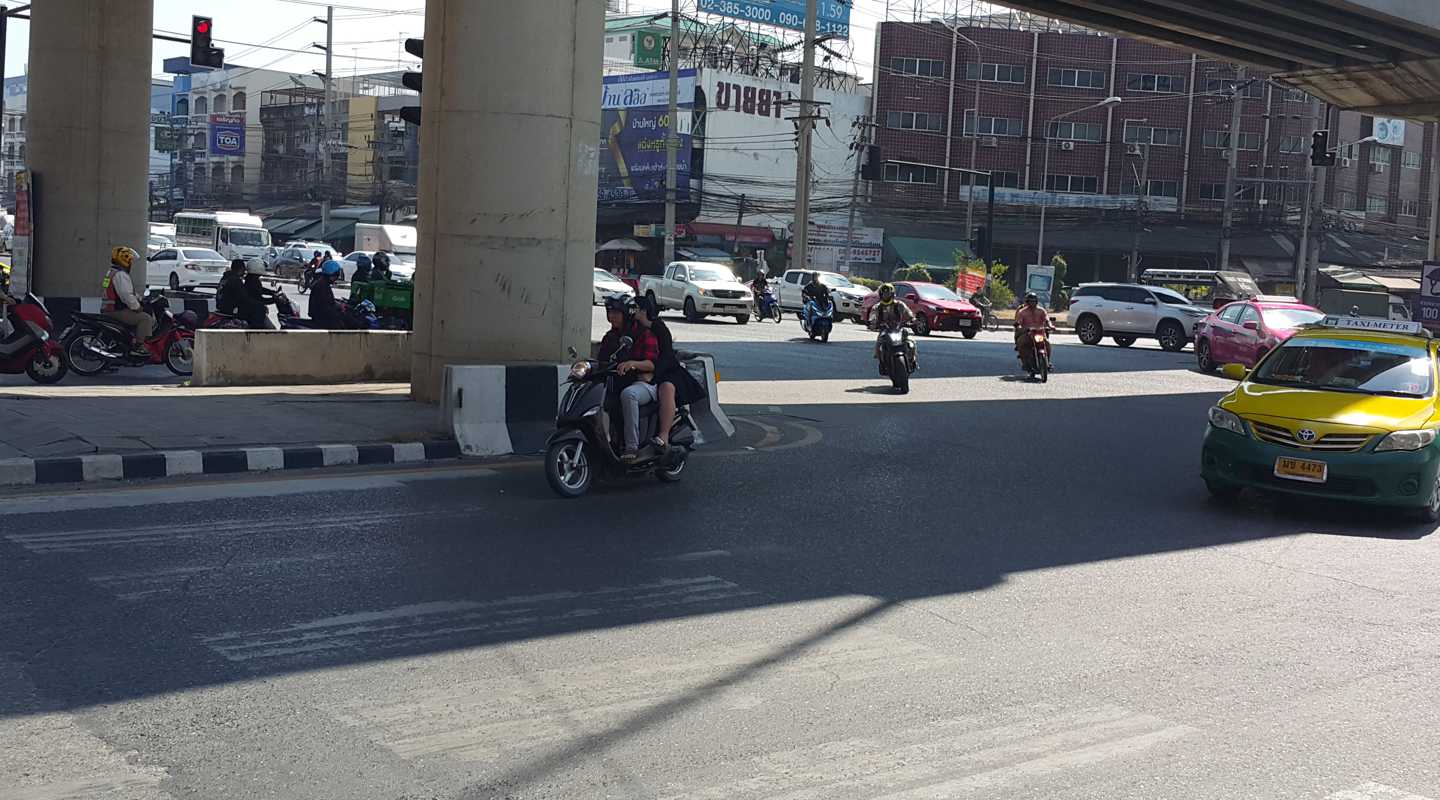 Now it's time to negotiate the busy intersection of Theparak Road and Sinakarin Road. Time things badly and you could be left waiting for as long as three minutes just to cross to the central reservation. Take note of how when I get to the central reservation and then complete the second part of the crossing, I will need to pick my way around motorcyclists who have actually stopped on the zebra crossing while they wait for the green light (just one of the many things that drives Bangkok pedestrians barmy)

Oh, and even when it's your turn to cross the road, always keep on eye out for cars jumping red lights and motorcyclists performing illegal u-turns.

I know what you're thinking - 'what you need Phil is a fully-manned police box, so the boys in brown can jump out and arrest the red-light jumpers and the illegal u-turners'  Well, from where I'm taking this photo, I'm literally leaning up against one. 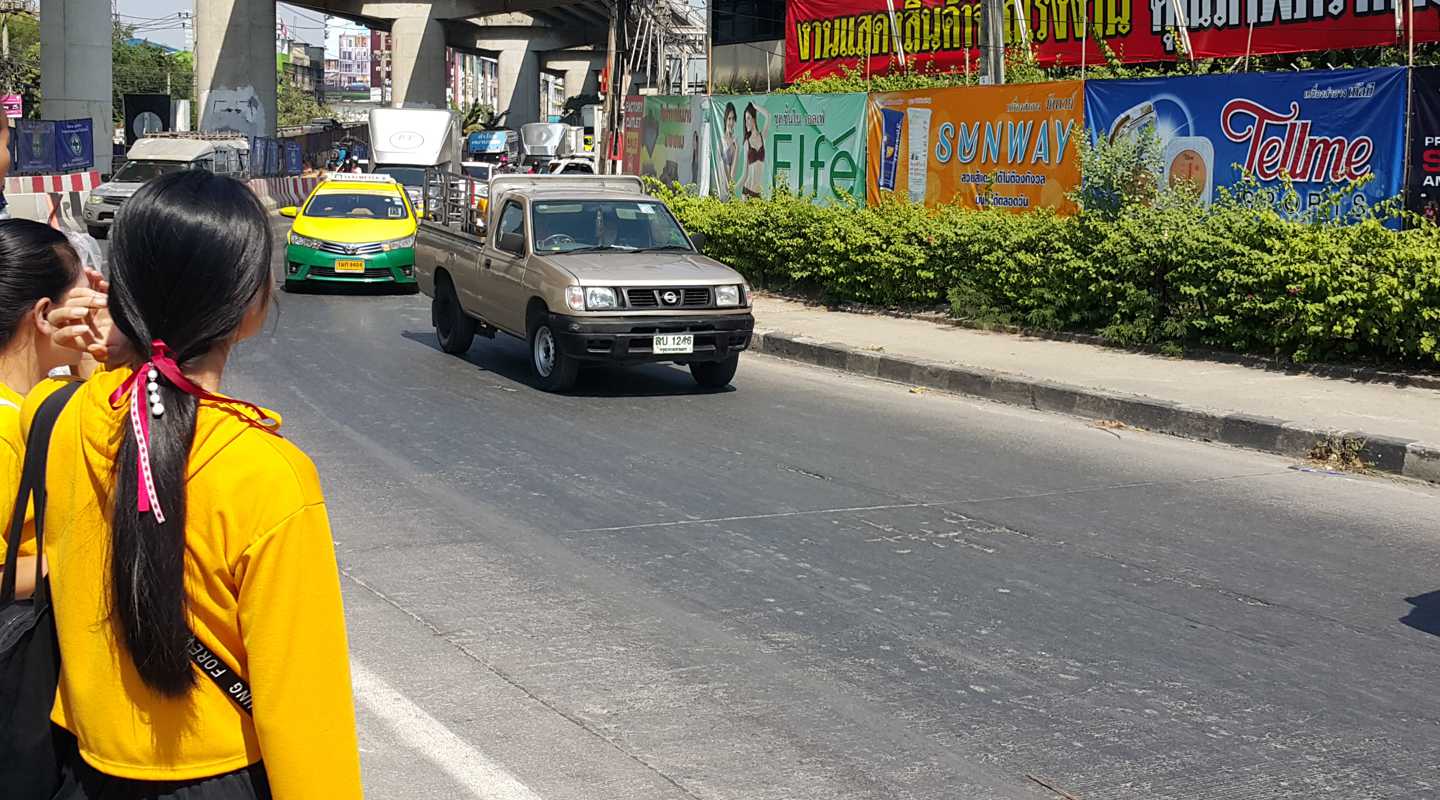 So that's what indicators are for?

I've negotiated the busy intersection.  All that remains is this treacherous slip road, where vehicles turn left off Srinakarin Road and on to Theparak Road, going towards the expressway and Bang Plee.

I would estimate that of all the cars that speed around that corner, barely 10% use their left indicator.  As a pedestrian, you simply have to guess whether drivers are turning left or going straight on.  Best bet is to wait for a gap in the traffic and just leg it!  There isn't even a faded zebra crossing to give you a better chance. 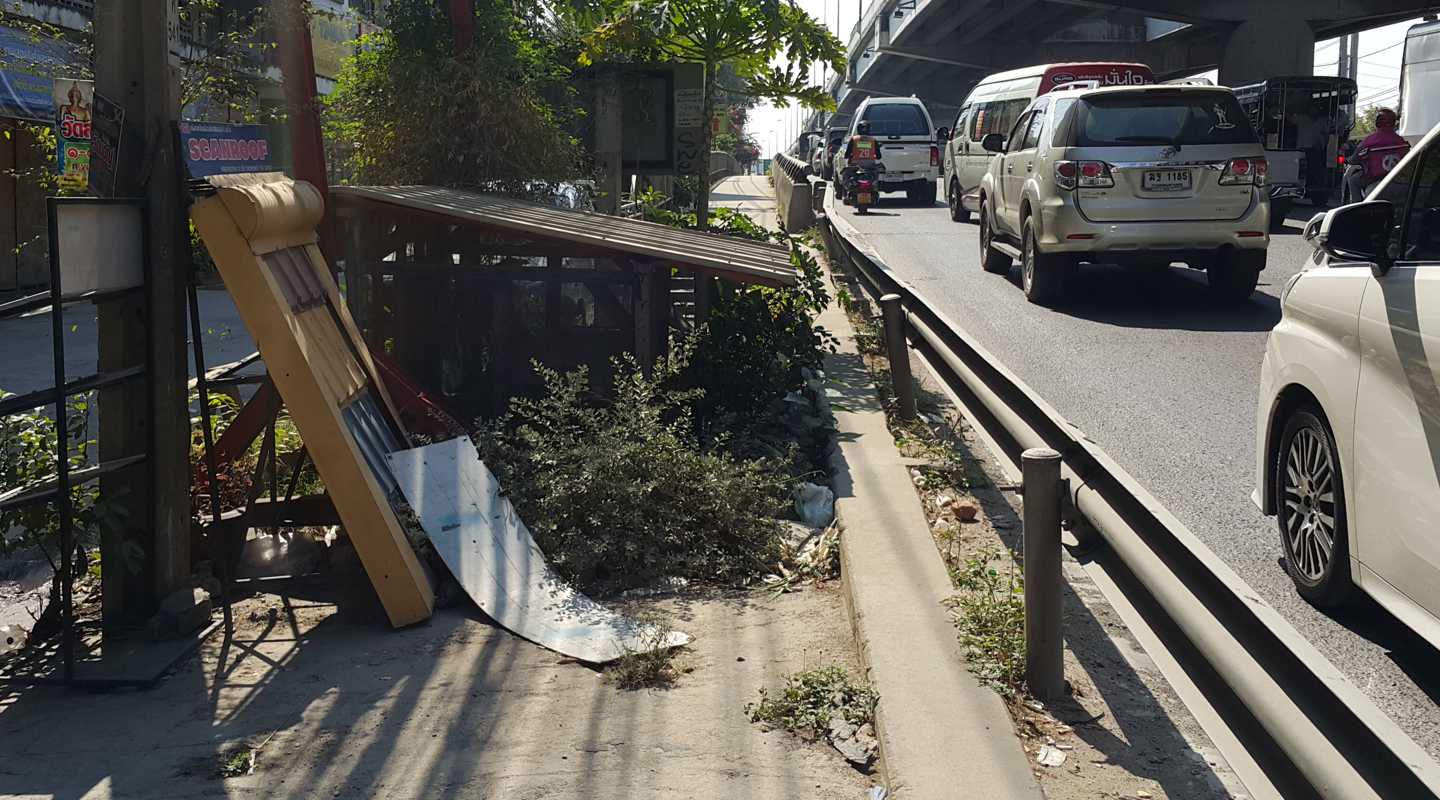 Now for the balancing act

After coming across that pedestrian bridge, which you can see in the distance (and coming towards the camera), I'm now almost half-way to the gym but there are still plenty of obstacles to overcome.  Once I reach the end of the bridge, it's too dangerous to drop down to the gravel path because many motorcyclists use it as a short cut.

Instead, I prefer (if that's the right word?) to walk carefully along the concrete ledge, taking care not to fall into the undergrowth, cut my arm on that corrugated iron roof affair, or scrape my leg against one of the six inch bolts that protrude from the metal posts. 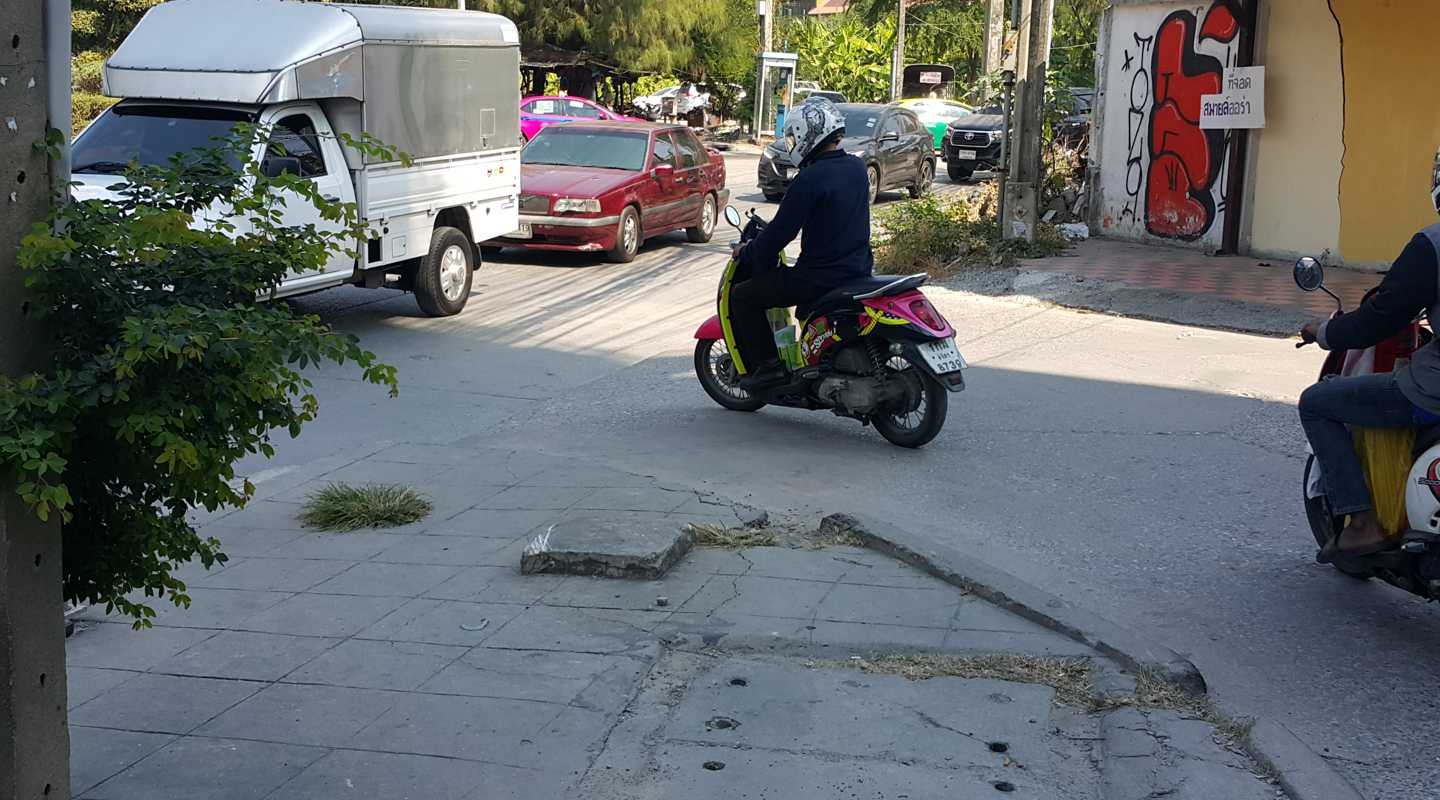 I've now reached the junction of Soi Wat Dang, on which the gym is located, and I need to make my way across the road to where that telephone box is (can you see it?).  There is always plenty of one-way traffic coming from the right but what makes this small junction particularly dangerous is the number of motorcyclists illegally turning right against the flow of the traffic. So you end up with cars and motorcyclists criss-crossing and weaving around each other, and in the middle of all the carnage is you - the hapless pedestrian. 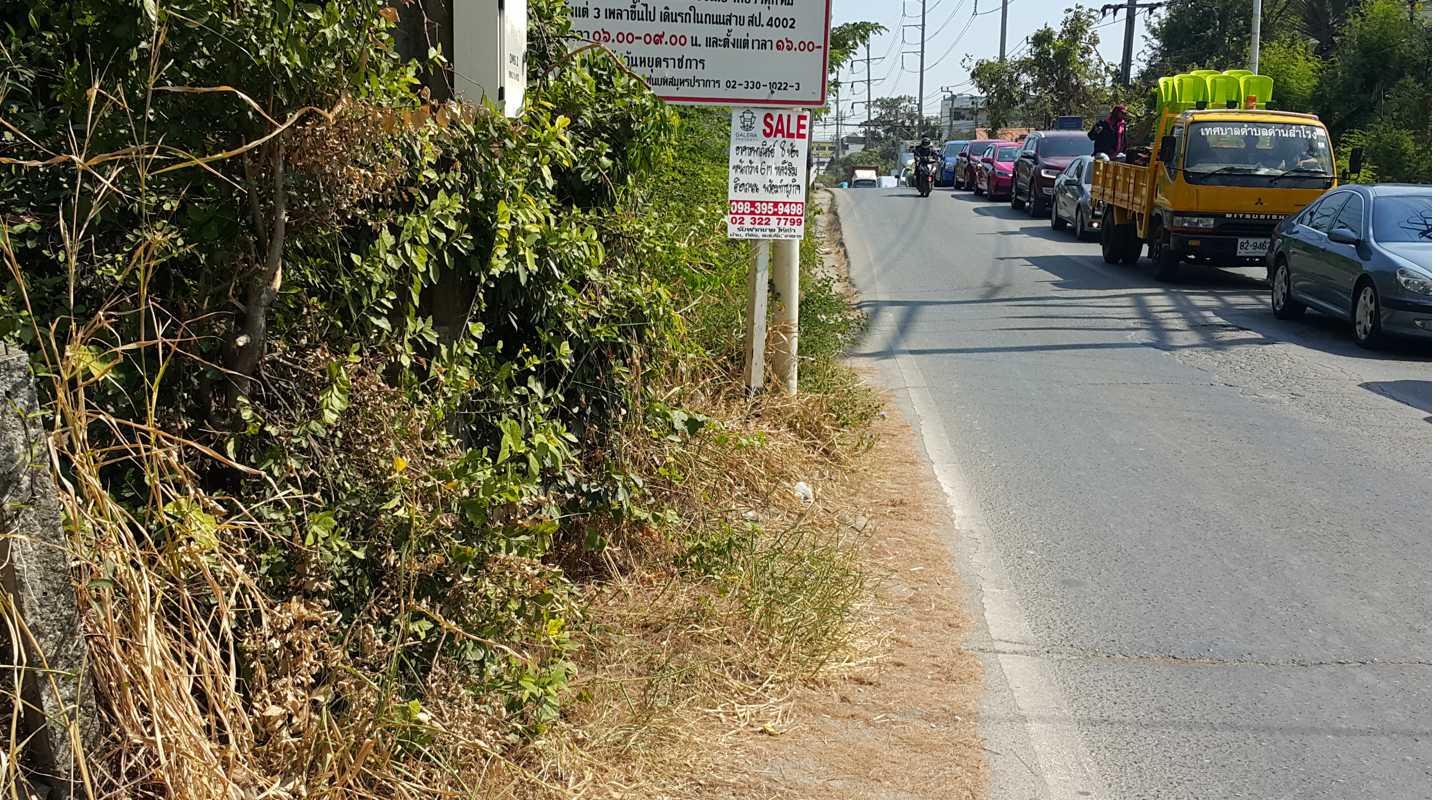 I've made it to the telephone box and all I'm left with is the walk up to the gym.  There are no more roads to cross.  Alas, what you are seeing here is the footpath at its very best. Obviously the local tessabaan have just been round to give it a trim.  For most months of the year, the footpath is so horribly overgrown with weeds that you are once again forced to walk out into the road. And trust me - there are some bloody enormous trucks using this particular thoroughfare. 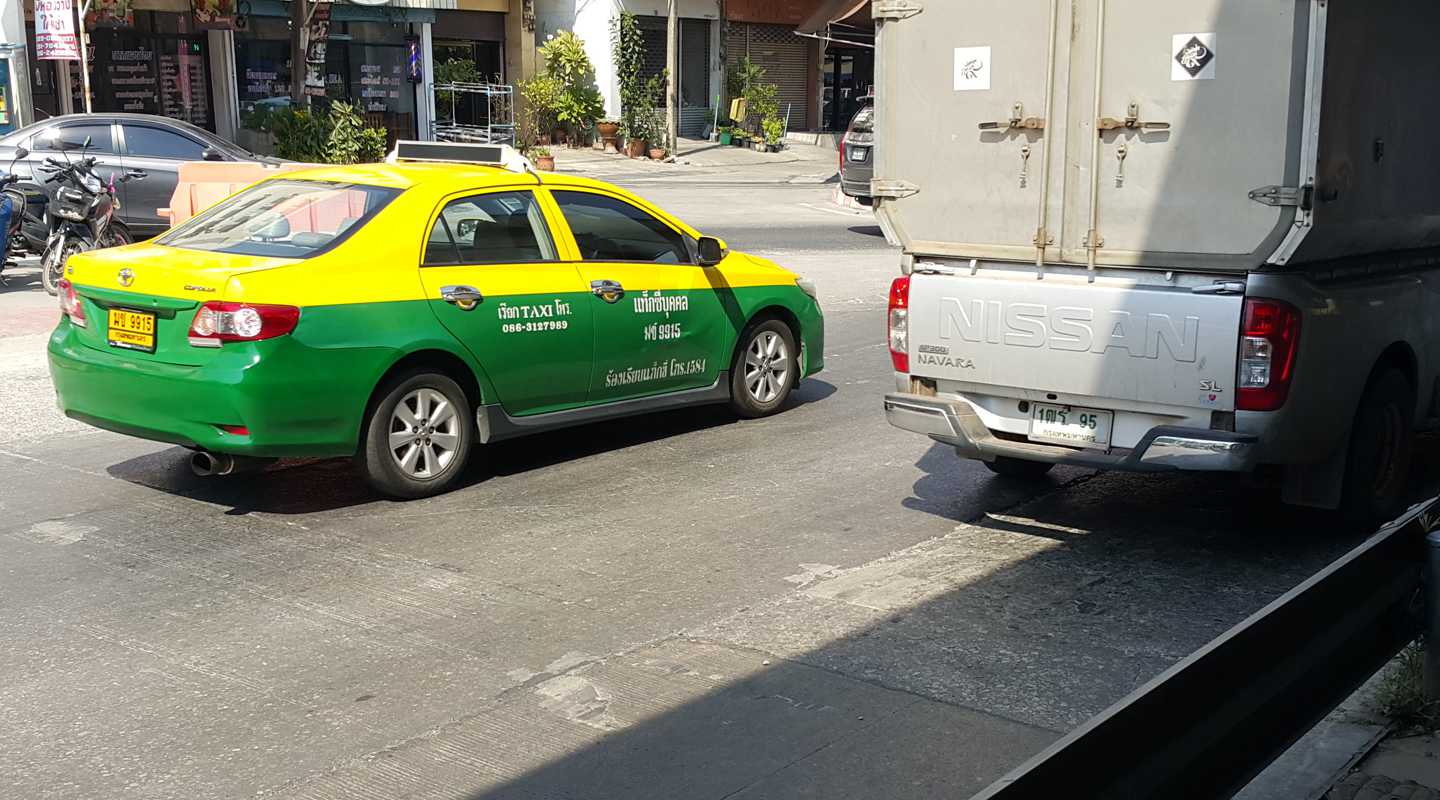 Gym session completed and to go home, I don't actually follow the same path in reverse; not quite anyway.  I usually need to pick up a few things at 7-11 so my walk home is akin to completing the other half of a circle.

First, I need to cross the busy Srinakarin Road, where zebra crossings are merely decoration.  Try to cross this major artery alone and you'll be standing at the kerbside all day.

This is where you have to rely on what I call PEDESTRIAN POWER.  It's when eventually there is an accumulation of about half a dozen pedestrians, one of them is elected leader and that brave soul raises his or her arm to stop the traffic in mid-flow. Then we can all cross relatively safely.

It's not unknown for a group of pedestrians to encourage each other as they cross the busy road with comments such as "quick, run!" or "OK, NOW!"  I often give a thumbs up to the kindly drivers who have bothered to stop and not kill me today. 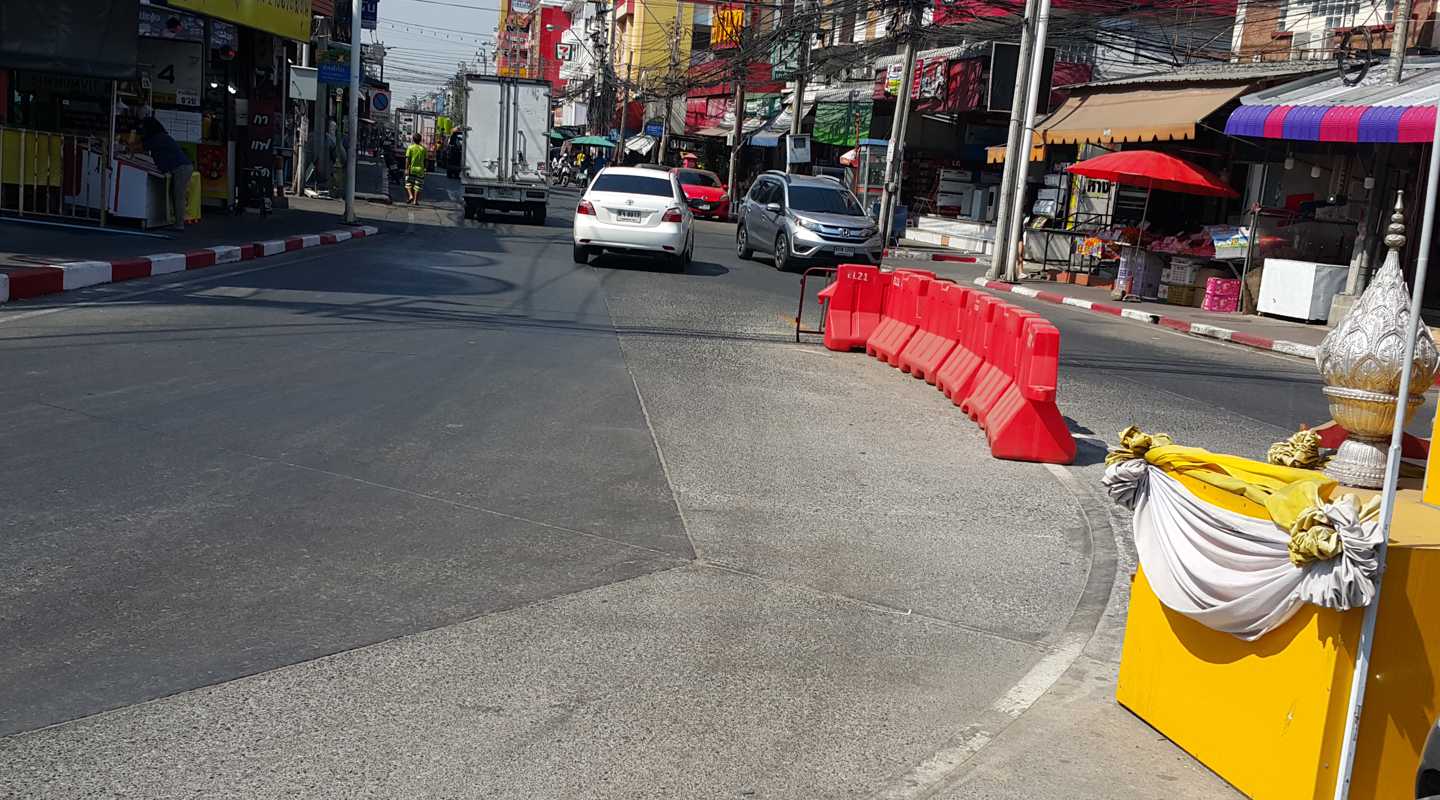 To get to 7-11 means crossing the junction of Soi Wat Dan - and this one is an absolute bastard!  Legally, traffic should only be coming from the left but what happens is that smaller cars and motorcycles will squeeze between those red plastic barriers and the yellow podium to perform an illegal right turn.  When you consider my complete walk to and from the gym, here is where I always feel I have most chance of being hit.

A few months ago, the police had a crackdown. They moved the plastic barriers right up against the yellow podium so that turning right was impossible. The crackdown lasted possibly 2-3 days, after which motorcyclists started to shift the barriers and create a gap.  Then the gap just got bigger and bigger.  It's OK to break the law as long as you only break it a little bit.

So where are these illegal right-turners going? 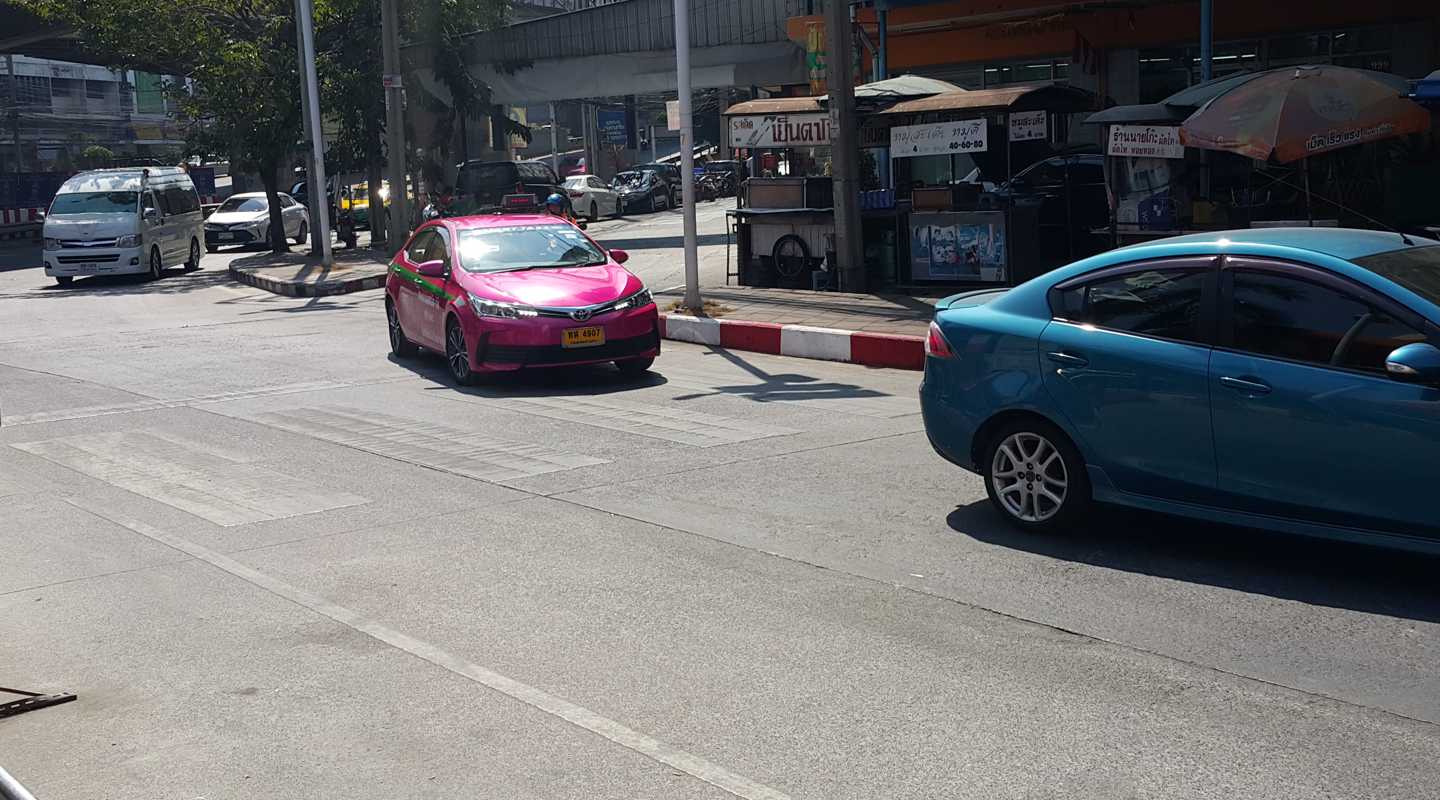 I'll tell you.  They're heading diagonally against the flow of traffic to enter that small side-road from which the pink taxi has just emerged.  Crossing that zebra crossing, a pedestrian should only have to be aware of traffic coming in one direction (from the left).  In reality, it comes in FOUR different directions.  To use one of my mother's favourite expressions - 'you need eyes up your arse!' 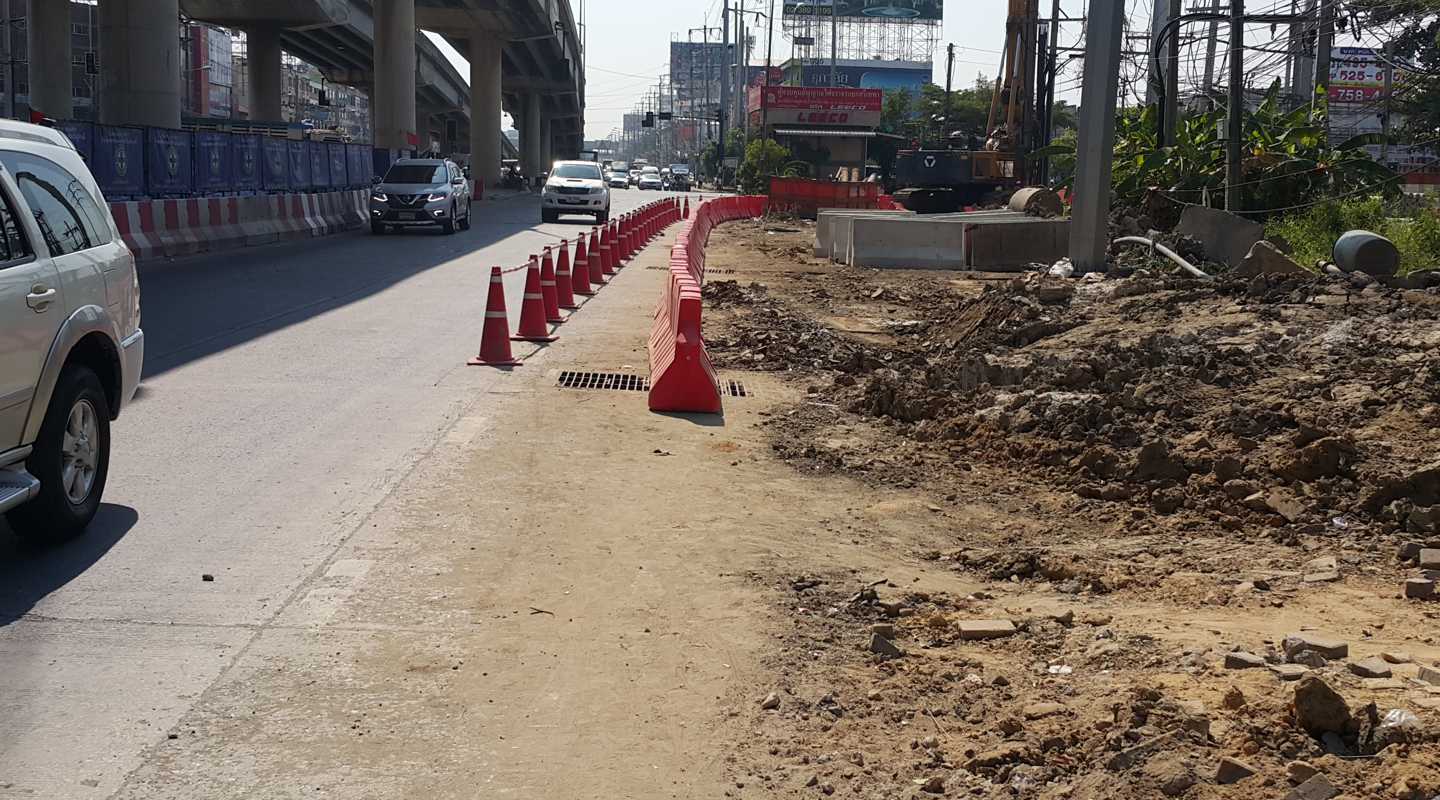 I'm almost back home and we're approaching 'construction corner' once again.  The pedestrian walkway as you come along Srinakarin is well-maintained. It's one of the few sections of the walk where I feel almost safe. 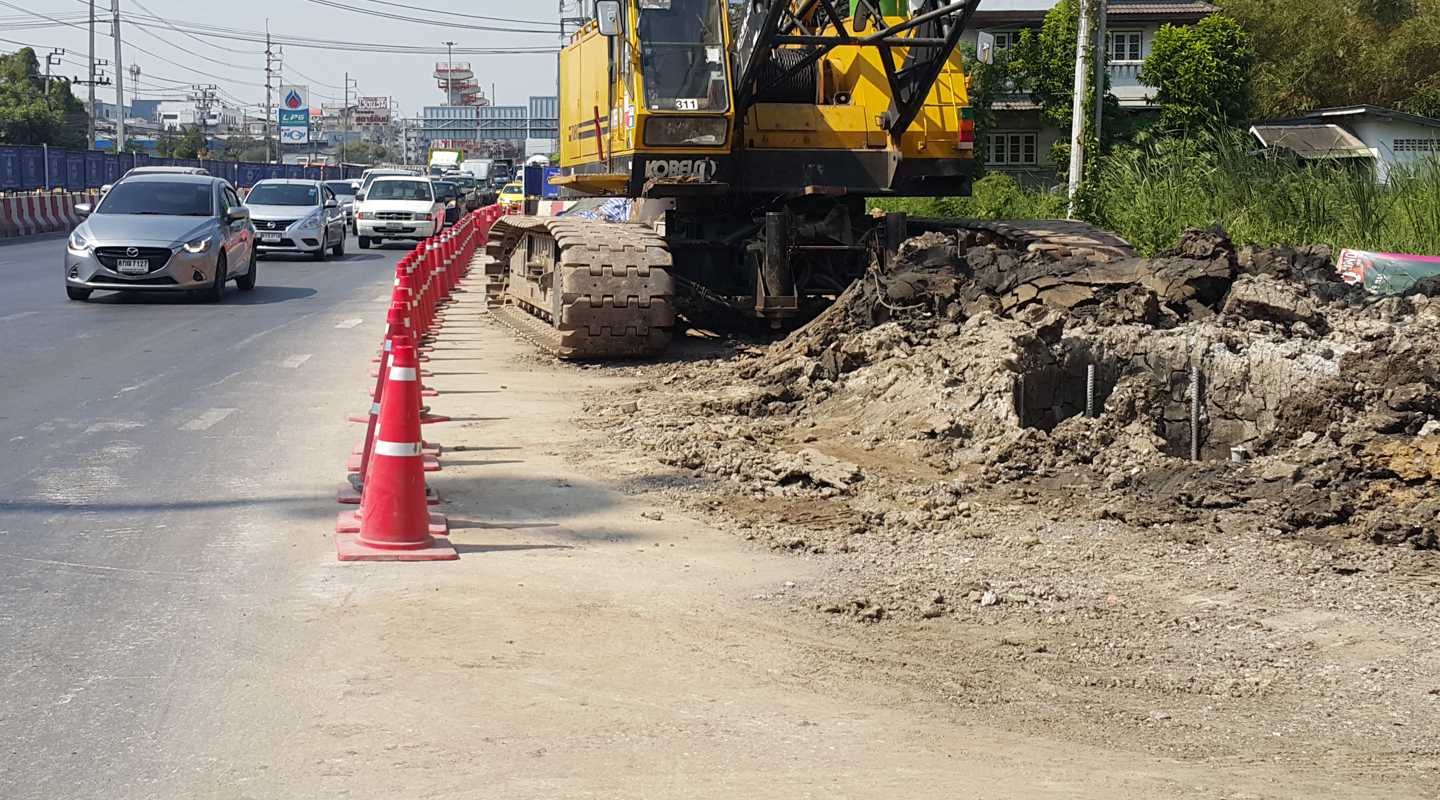 The walk-way on Theparak Road is still looking good.  I just hope the guy operating the digger sees me as I walk by because frankly, it's not the way I would choose to bow out.

I lived around that corner for a few years too, I still drive my bike down there occasionally. It's never been great, although the construction has made it worse. Frankly it's a terribly designed corner with one of the longest wait times outside of central Bangkok.
I'm surprised you didn't mention the soi dogs that crap all over the bridges leading up to the corner from Srinakarin - they make it stink to high heaven. The corner itself is depressed, so in the rainy season it fills up with water that never drains.
This city really should have been planned better.

It is indeed terrible where you live, but I thought you were in SP not Bangkok. I know that's classed as Greater Bangkok but I wouldn't really call it Bangkok. In most central areas of Bangkok there are good pavements and it's fairly rare to see motorbikes on them. I've never see anything like in your images in central Bangkok. Sure there are a few dodgy parts but on the whole the pavements are better than in some UK towns I've visited. Could be improved but it's not as bad as you make out. I get the impression that you think the whole of Bangkok is like where you live. It's not.