My wife and I have become huge fans of a restaurant called Wine Connection at Megamall Bangna. Actually I believe they have several branches in Bangkok and a new branch may have recently opened in Chiang Mai.

The quality of the food is good and the menu prices are extremely affordable for a restaurant of that standard - but the main reason we keep returning is the level of service that hits you the moment you walk through the door. I have no idea who the owner of The Wine Connection chain is but oh boy, does this person know how to run a dining establishment.

In the UK reality TV show, The Restaurant Inspector, Fernando Piere - the director of world-famous, Michelin-starred London restaurant, The Ivy - begins each programme with a simple message - "when people go out for a meal, they aren't just looking for good food, they're looking for an experience, they're looking for some love"

The moment you enter Wine Connection in Bangna, you can certainly feel the love.

You are promptly greeted at the door. There's none of that awkward standing around while the staff work out where the hell you're going to be seated and end up just ignoring you.

The menus are handed to you as soon as you sit down and you are then left alone for several minutes to make your choices, after which a discreet nod of the head will bring forth a waiter with his pen and pad. I mean is there anything worse in a restaurant than being given a menu and then having the waiter hover over you as if you have 90 seconds to place your order or he'll self-destruct.

If you're dining with a partner or a group, ALL the starters and main meals arrive together - and anyone who has lived in Thailand any length of time will tell you what an achievement that is.

Not only that, but all the time you are eating, the waiter stands a comfortable distance from your table but remains aware of the situation should you raise your hand for an extra bread roll or simply to ask a question.

It's exactly how a restaurant dining experience should be. And it's only more noticeable because Thailand - and let's be truly honest about this - is a country where all too often, poor to average customer service is the accepted norm.

I once worked with a teacher who had gone through a mid-life career change (as many folks do) and in the past, he had managed several high-class restaurants in Los Angeles. I used to enjoy my little chats with James about the restaurant business as we both prepared lessons in a corner of the teachers' room.

"It's all about good training" James used to say. "Whether it be the restaurant business or any other, you have to train your staff well. You can't afford not to in this day and age"

James is sadly no longer with us, but I always remember his wise words whenever I'm enjoying a meal at Wine Connection. Yes, he was definitely right about one thing - it's all about the training.

My wife and I were at Megamall Bangna again today. After another fine lunch at Wine Connection (I think these guys ought to be putting me on the payroll for these recommendations) we had a little wander around the shops with no particular objective in mind.

A tale of two stores

We ended up browsing in just two stores - one was Uniglo, a Japanese clothing chain, and the other was Sportsworld, a retail sportswear company that I believe to be Thai-owned. If you were seeking out examples of a store that clearly provides great staff training and a store where staff training must surely be non-existent, then these two companies couldn't have provided a better contrast. They were complete polar opposites.

The staff at Uniglo greet you with a cheery hello every time they walk past (OK, it does get a bit tiresome when you've heard it for the 12th time) and they are always available to answer questions and direct you to what ever you're looking for. Nothing is too much trouble.

Sportsworld, on the other hand, is a disaster. The staff stand around looking bored and dejected and you instantly feel that anything more than the most basic question will be met with a shrug of the shoulders.

I go into Sportsworld because it's a decent place to buy cheap gym shorts. You won't catch me spending 1200 baht on brand name shorts when the 250 baht ones serve the purpose just as well. As usual, the cheap gym shorts were all plonked on top of a display unit in the middle of an aisle. That's OK because I enjoy a good old rummage. Except I couldn't do any rummaging on this occasion because there were three shop assistants (at least I think that's their job description) leaning on the display and enjoying a hearty chinwag. I think the gist of the conversation was that one of their friends had posted a fluffy kitten picture on Facebook - and why bother with customers when there are fluffy kitten photos to be fawned over.

I whipped out my mobile phone to capture the scene in front of me - and then left minus the shorts. Yes, it's all in the training. 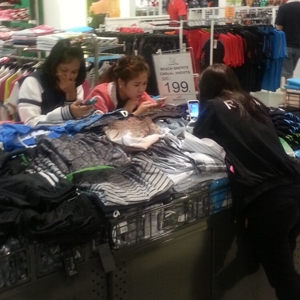 I'm going to go off on a slight tangent if I may. Isn't it amazing how many staff members in so many stores are glued to their smartphones these days - with Facebook undoubtedly the main culprit? Want to know where the sugar is kept? Want to know if they have that garment in a larger size? Where are the toilets because I'm busting for a piss?

Oh the looks and scowls I've had for disturbing a shop assistant as they like and unlike or friend and unfriend - and dare to have the temerity to expect staff to do the job they are being paid to do.

It's little wonder that so many companies have banned their staff from using Facebook and other social networking sites. I totally understand where they are coming from. And if I was a company boss, I'd do exactly the same thing.

My wife recently bought a new car. It's a Nissan something or other. Oh please don't ask me about models or types of car. I loathe anything to do with cars and I always have. In all the years I owned a car back in the UK, my relationship with it never went beyond opening the door, turning the ignition key and hoping the damn thing got me to point B. I was the only motorist in The British Isles who had to get someone to help me whenever I needed to put air in the tyres.

Where was I? Oh yes - my wife bought a new Nissan car. Previously she had a Toyota - a grayish Toyota something or other. Now if you ever needed another example of staff training at its very best, look no further than the Toyota Service Centre in Bangna, opposite Central shopping complex.

Twice a year, my wife would drive there for a check-up. And even though I hate cars with a passion, I would still tag along because I enjoyed being part of such a wonderful customer service experience. And she would usually take me for lunch afterwards!

Here was a place that took its staff training seriously. You parked up in front of the Toyota Service Centre and a mechanic in spotlessly-clean uniform would instantly appear, open the driver door and enquire as to your reasons for being there. After scribbling a few lines on a clipboard, he would take you to the reception area where you sat on sumptuous swivel chairs and settled payments with gorgeous female service representatives. You were offered free coffee and a seat in the TV lounge or if you fancied half an hour of free internet, there were three computer terminals for public use. What more could a customer ask for?

Then after taking down all your details, someone would say "your car will be ready to pick up in two hours madam" - and it always was. Not once did we go back to find two legs sticking out from under the hood and endless bullshit excuses as to why the check-up hadn't been completed. The car was always ready.

The purchase of a new car of course meant a change of service centre. My wife feared it might be problematic and she was spot on. Everything that Toyota does right, Nissan gets wrong. It started with us getting hopelessly lost on Kingkaew Road - a thoroughfare that seems to stretch from here to Cambodia. We decided to park up and call for directions. The phone rang for 20 minutes. I visualized two office girls looking at cute kittens on Facebook and one saying "let it ring, they'll give up" But eventually they answered and gave us the most convoluted set of directions you could ever wish for. After calling back three times, we finally found the service center.

A security guard, who clearly disliked being disturbed, told us where to go by waving a hand in the direction of the rest of the world, and once we drove into the service bay and got out, we then stood around like idiots for what seemed like forever. A mechanic eventually took pity on us, put down his grease-gun, stubbed out his fag, and led us to the office - a tiny space with four chipboard walls and a desk where the customer service rep sat - at least when she's not in the toilet, which is where she was now.

To cut a long story short, we persuaded them to accept the car and wandered off for a bite to eat, shaking our heads at how two giants of the car manufacturing world - Toyota and Nissan - could have such differing levels of customer service.