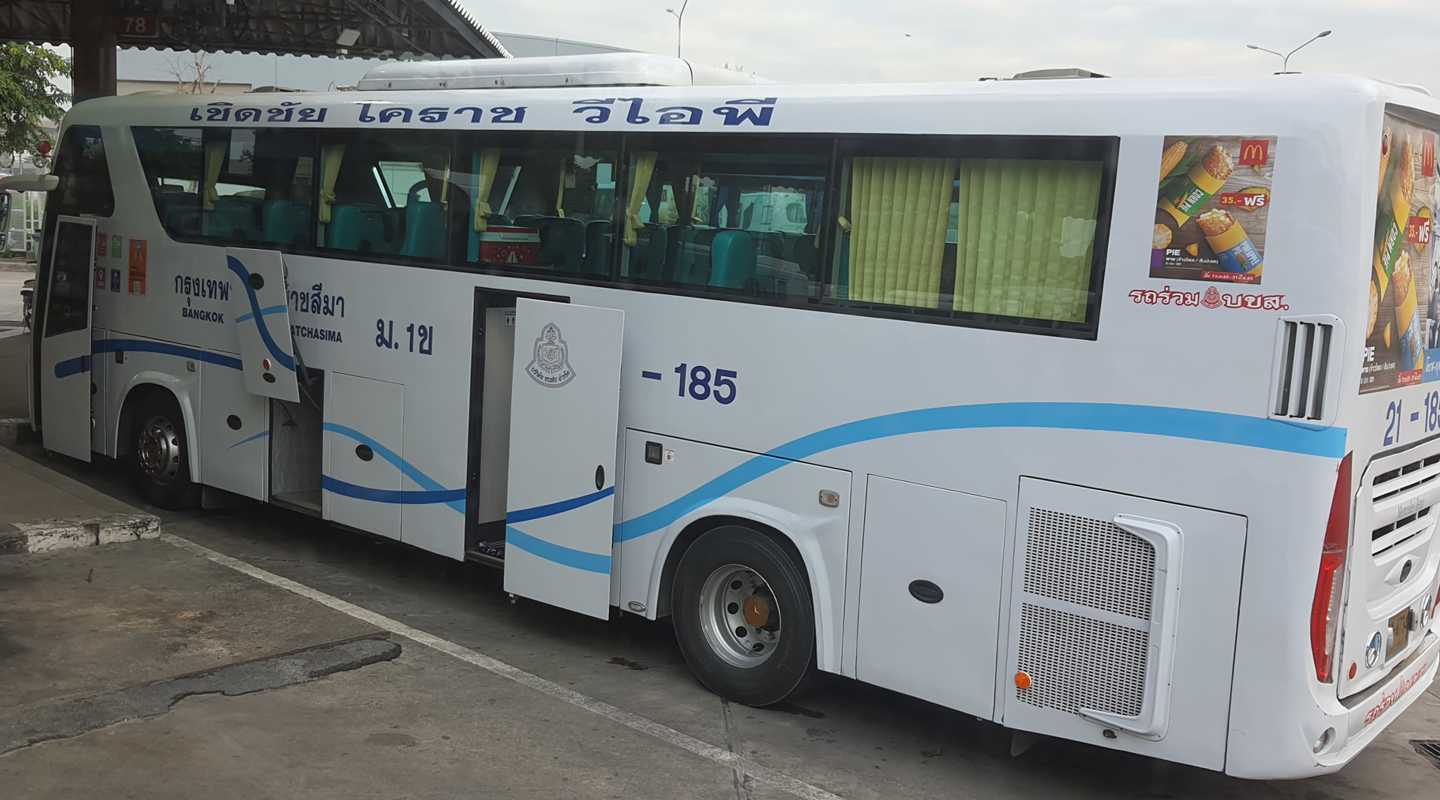 Long distance bus travel in Thailand has long had a poor reputation. Now there's an understatement for you.

We've all seen newspaper photographs of buses, upside-down and wheels spinning in some roadside ditch, after the driver has taken a corner too quickly or tried to attempt a ridiculous manoeuvre on a narrow road.

But is the bad press truly deserved? I was about to find out.

I hadn't taken a long-distance bus from province to province for over 25 years. The horror stories had put me off this particular mode of transportation as much as the next man. However, being an avid follower of Thai football and  a supporter of Samut Prakan Football club, I needed to somehow get to away matches - and not being a car driver, buses were the only option.

I dipped my toe in the water by booking a seat for the four-hour bus journey from Bangkok to Khorat. It took just a few minutes to secure a ticket on the excellent busonlineticket website. So far, so good.

Having not been to Bangkok's busy Morchit Bus Terminal (which serves most routes to Thailand's north-east) for at least a couple of decades, I asked around on social media for any advice about ticket counter locations, bus bays and convenience stores, etc. I read that Morchit can seem a little chaotic for the uninitiated and I hoped that forearmed would be forewarned.

And this of course stirred the naysayers into action; those who couldn't believe I was even contemplating getting on a long-distance bus in Thailand. Several had their own nightmare story to share. One person offered to send me a video of a driver steering the bus with his bare feet. You get the picture. But I plowed on with my plans regardless.

I often think when people offer 'well-meaning' advice NOT to do something, they are drawing on one-off experiences from perhaps, 10 or 15 years ago. However, transportation systems change and improvements are made. I preferred to listen to the opinions of those folks who travel from province to province regularly, had never had an issue, and actually found the whole bus travel experience enjoyable. You can't knock something if you haven't tried it recently.

To catch my 7.00 am bus to Khorat, it required a short 50-baht taxi ride from Morchit sky-train station. I had read one article online that said staff at Morchit Bus Terminal could be unhelpful and unfriendly. My experience was the polar opposite. From the moment I pulled up outside the grand and imposing main entrance, uniformed staff (not touts of any description) approached me to offer a helping hand.

"Where are you going? Khorat? OK, go through that entrance there and then up the stairs to the first floor."

At the top of the stairs, another kindly face saw that I was clutching an A4 printout and probably in need of guidance.

"Ah, you need to pick up your ticket to Khorat at counter 49. It's over there"

After I had received my ticket at counter 49 from staff with a far more cheerful disposition than I have at that ungodly hour, I made my way downstairs to the bus bays, A small group of drivers called me over to inspect my ticket and once again, point me in the right direction.

Frankly, you couldn't have got on the wrong bus if you had tried.

Two thumbs up for Cherdchai

I had booked the ticket with Cherdchai Travel, who seemed to specialize in the Bangkok to Khorat route. There were something like 81 Google reviews of their service online and they had scored a mere 1.5 stars out of 5. But bad news always travels faster than good. It may have set off a few alarm bells but they were absolutely fine. The bus looked roadworthy, the seat was comfortable and we left Morchit just seven minutes behind schedule. En route, the driver kept to a steady speed in the left-hand lane (even on the expressway) and the four hours to Khorat passed without incident.

Someone on social media told me that I could expect the meal served on board to be 'inedible' - probably some kind of unidentifiable meat plonked on top of lumpy, low-grade rice. It was nothing of the sort! When we reached the outskirts of Bangkok, the bus pulled up in front of a drive-through McDonalds, where staff were already waiting with a huge plastic box, filled with burgers for the 30-odd peckish passengers on board.

We arrived at Khorat's New Bus Terminal well before midday. The journey had taken four and a quarter hours. I grabbed my holdall from the overhead rack and bid farewell to the Thai gentlemen who had sat in the next seat and occasionally engaged me in light conversation. When I say I had enjoyed the journey, I genuinely mean it.

As good as it gets

For the return trip from Khorat to Bangkok the following day, I decided to try out Nakhonchai Air. They are without doubt the most trusted and reputable bus company in Thailand, with probably the best safety record to boot. The seat on Nakhonchai Air was actually cheaper than with Cherdchai Tour (209 baht as opposed to 259 baht) but their service was on a whole new level.

Firstly, there was a charming hostess to carry my bag on board and show me to my place. Then once the complimentary bottle of water had been handed out, I could sit back and enjoy a spacious seat that boasted a massage function, a surprisingly good recline and a USB port to keep my phone charged throughout the journey. The loud TV I could've done without but thankfully it was lowered as soon as we hit the road.

Thanks to light Sunday morning traffic, we covered the distance back to Bangkok in just three and a half hours.

Several people on social media commented that a flight will always trump a bus journey.  My answer to that is it depends; it's not always that clear cut.

When we weigh up the pros and cons of flying v taking a long distance bus, we often conveniently dismiss the amount of fannying around that you have to do at airports with checking in, going through security, and arriving at the airport far too early anyway.

Airports can sometimes be miles from the city itself. Buriram and Trat (two journeys I plan to make before New Year) are prime examples. Both airports are a good 30-40 minute drive from the city and you sometimes have to rely on pricey shuttle services or public taxis to get you into town.

If you are flying from Bangkok, then Don Muang Airport (where many lo-cost airlines fly from) can feel like the other side of the world. From my house in Samut Prakan, it can be a one-hour, 600-baht taxi ride. The time and costs mount up! Then of course you have the cost of getting back from Don Muang to Bangkok once your trip is over. The last time I was there, I had to queue 90 minutes for a public taxi. The time and costs mount up!

And let's not forget that a flight ticket can easily be 4-5 times more expensive than a bus and seats on planes are certainly less comfortable.

I've come to realise that a flight isn't always the best option to get from A to B, and on a final note, I thoroughly enjoyed my long-distance bus travel experiences and can't wait to do more!

In the last few years i have travelled to and from buriram via morchit and found the service at the station and bus journey absolutely spot on 🙏 never popped into McDonald's though something to look forward to in the future.

On breaks we always take bus to Phangnha. Flying in is 3-4 times more expensive and I avoid Phuket like it was Mordor. Bus gets you much closer to where you're headed.

It's not the best sleep you'll ever have but you'll wake up at your destination for 500b.

New transit hub will be interesting.