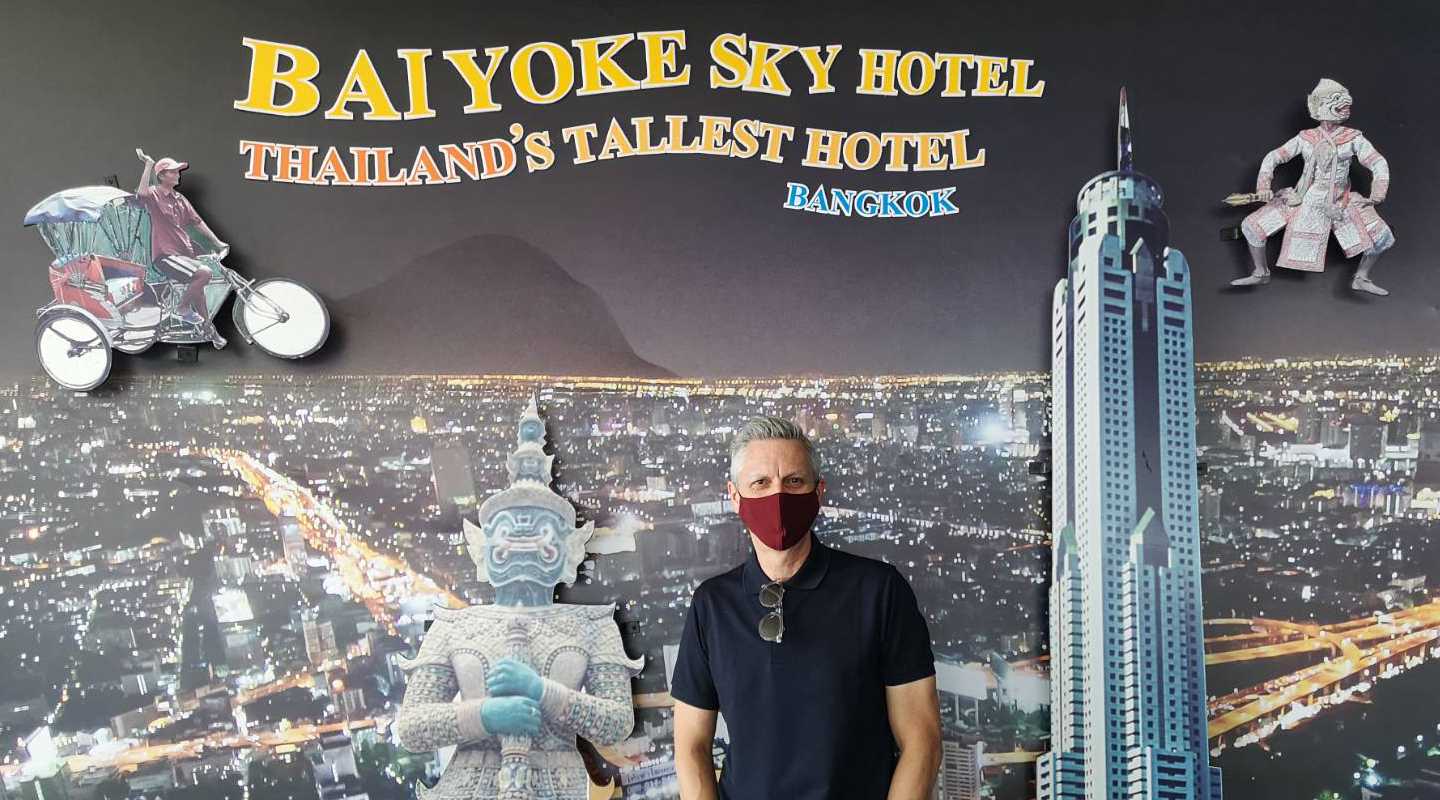 One of my friends on social media tweeted "most likely the only positive side-effect of the pandemic is being able to travel in Thailand at the luxurious end of the market at a very reasonable price - for both Thais and expats.

He's absolutely spot on! My wife and I just took advantage of one particularly amazing promotion deal at Bangkok's tallest hotel - the 88-floor Bayoike Sky in Pratu Nam. This is what the deal included for less than a thousand Baht a person (that's about £22 or $30 a head)

- A city view suite (upgraded from a standard room), which was ours for 30 hours, so we could check in at midday on the Saturday and check out at 6pm the following day.

- A buffet breakfast on Sunday morning

Talk about getting bang for your buck!

These amazing hotel packages are made possible by using the Thai government's 'Rao Thiaw Duay Kan' (we travel together) app, which will get you a further 40% discount off the already attractive promotion price. Not only that but the government gives you an extra 600 Baht a day that you can spend on food in any of the hotel restaurants.

Although foreign residents cannot use the app directly, their Thai partner can. So selfishly I Ieave all the communication with the hotel and the form-filling at reception to my wife - and I just get on with enjoying the discounted facilities. 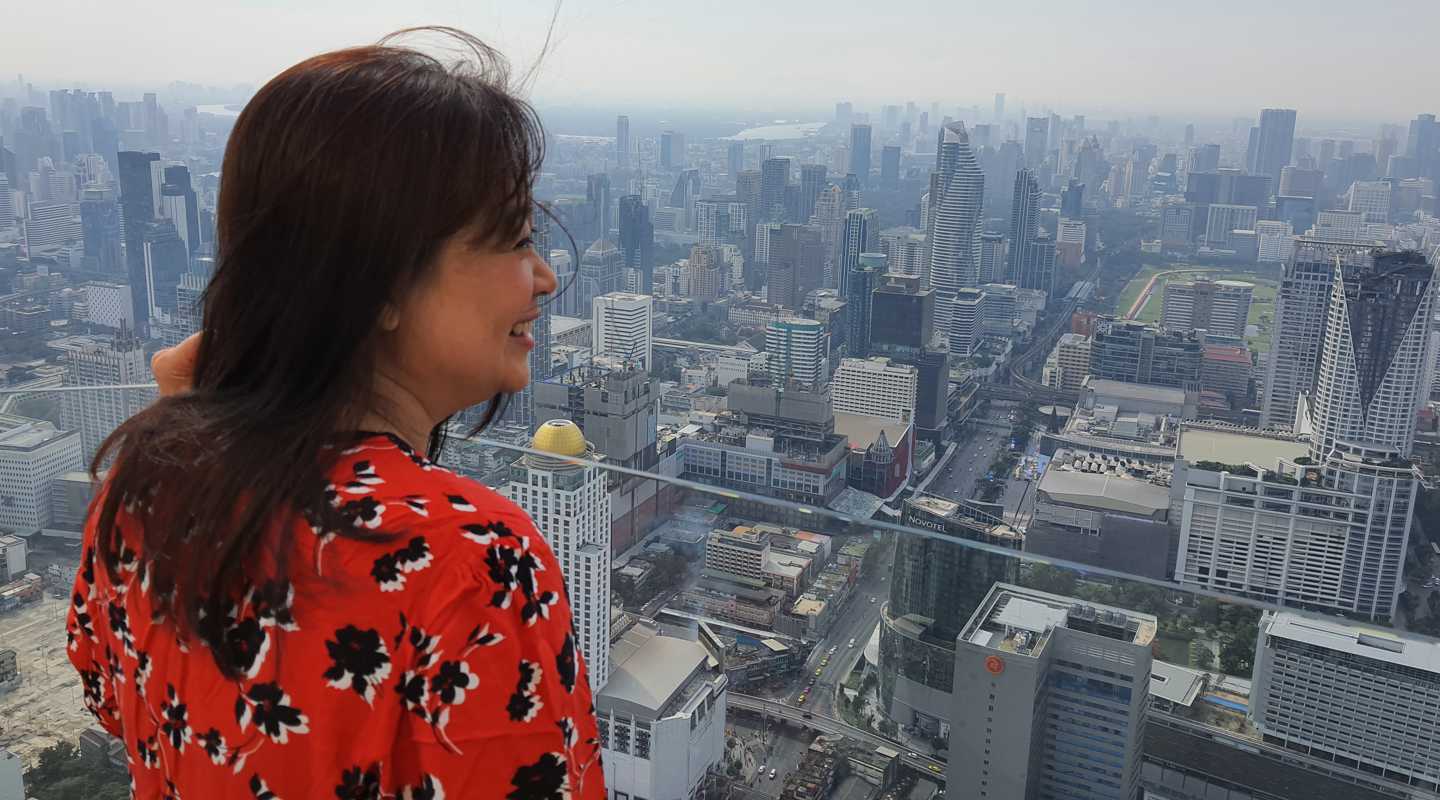 Gone are the days when travellers would book cheaper, more down-market accommodation and use the hotel or guest house purely as a base for getting out and about and visiting local attractions. Now - thanks to the promotion packages - they are booking 5-star hotels and resorts, making full use of the available facilities (pool, gardens, beach, mini golf-course, etc) and barely venturing beyond the hotel confines.

The car stays locked in the car-park for the entire duration while the Facebook and Instagram crowd pose with poolside drinks in their new beach outfits accessorized with floppy hats and snazzy sunglasses.

So let's get back to our 30 hours at the Baiyoke Sky in a bit more detail. 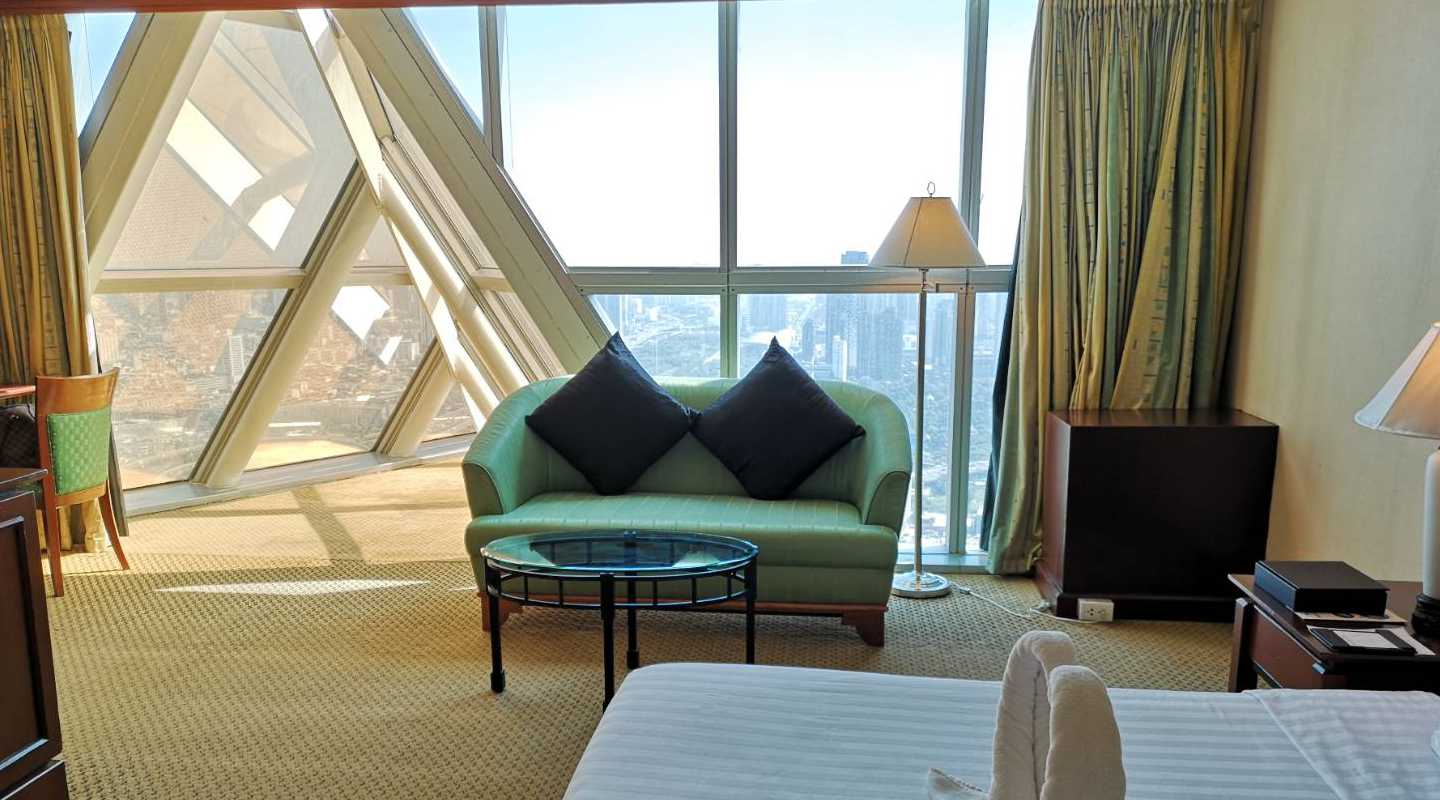 We checked in at midday and although the hotel is often criticized for long check-in queues on various online guest review websites, we marched straight up to the front desk where the young man on duty was efficiency personified. He was extremely well versed in how the 'rao thiaw duay kan' system worked and he furnished us with our room-key and meal and drink vouchers in no time at all.

We found our room on the 59th floor and as promised, it was a suite with a panoramic city view. Although the Baiyoke Sky was built in the late 90's, it looks and feels much older. The rooms, corridors and reception area are all a bit tired and in need of perhaps some refurbishment. This was certainly not the luxurious end of the Bangkok hotel market but hey! $30 a night let's remember.

We spent a good ten minutes just gazing at the cityscape 59 floors below - the high-rise buildings, the sparse areas of greenery and the complex expressway network - and realised how little we knew about the various neighborhoods.

The hotel had very little to offer in the way of lunch options, in fact, the Baiyoke Floating Market Restaurant on the 75th floor was the only place serving food at that time of day. En route we stopped off a few floors below where the hotel had provided an ernomous space for those guests and visitors looking for fun photo opportunities - Santa's sleigh, a hot air ballon, a speeding tuk-tuk - you get the picture. It was a nice touch and one of the many things the hotel got right. 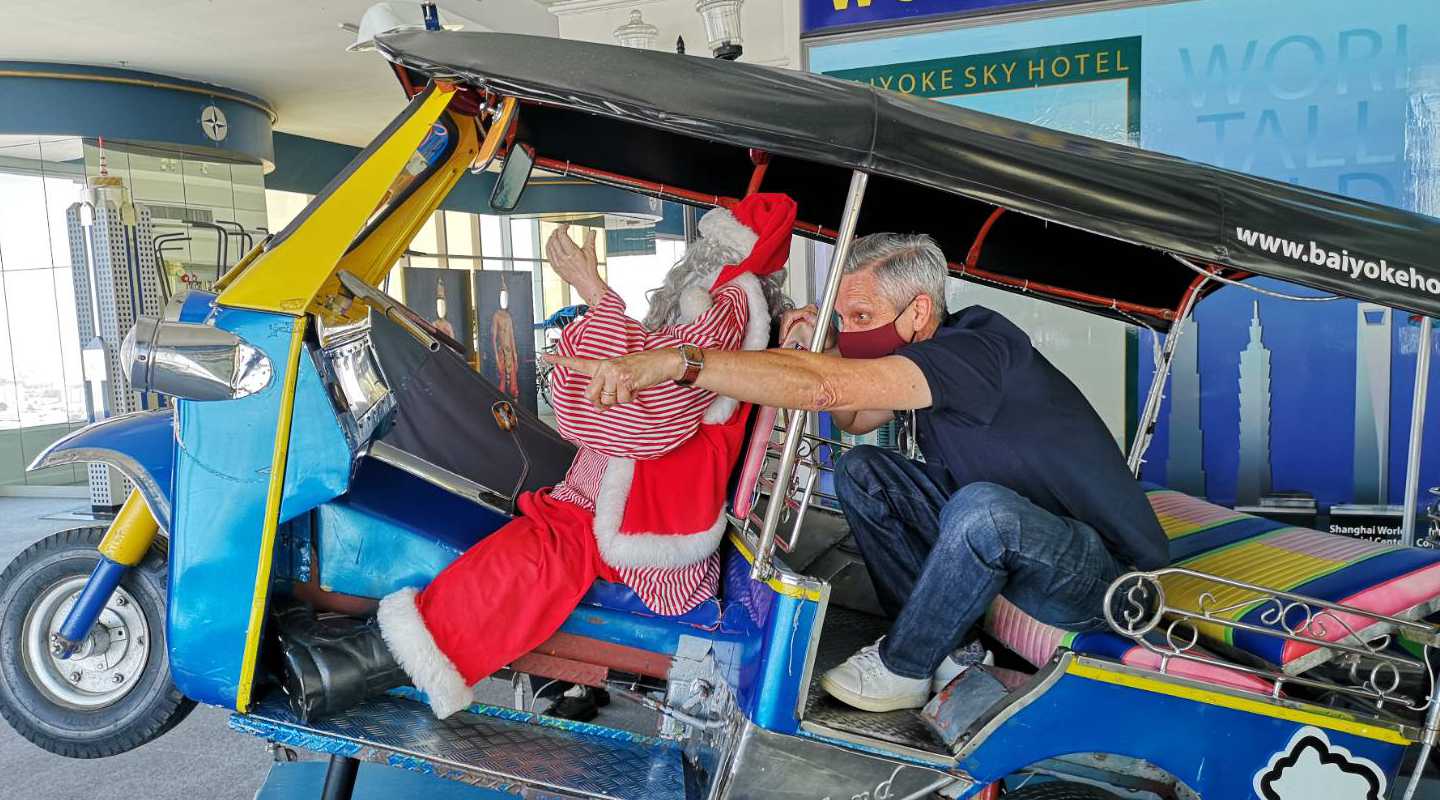 The Baiyoke Floating Market was basically a food court concept. There was a generous selection of Thai and international dishes available but the experience was let down by a convulated coupon system and a couple of 'old school' black-suited restaurant managers who crossed the line between helpful and overbearing. Despite me telling one of them I had lived in Bangkok for over three decades, he insisted on explaining every single Thai dish.

As for the payment system, you could only buy books containing a dozen coupons for 300 baht - a spaghetti dish was two coupons, mango and sticky rice was another two coupons, a drink or a small bowl of ice cream were just one coupon each, etc - but there were no refunds for any unused coupons! As my wife and I soon discovered, a 300 baht book of coupons wasn't enough to feed two hungry guests but two books for 600 baht was way too much. 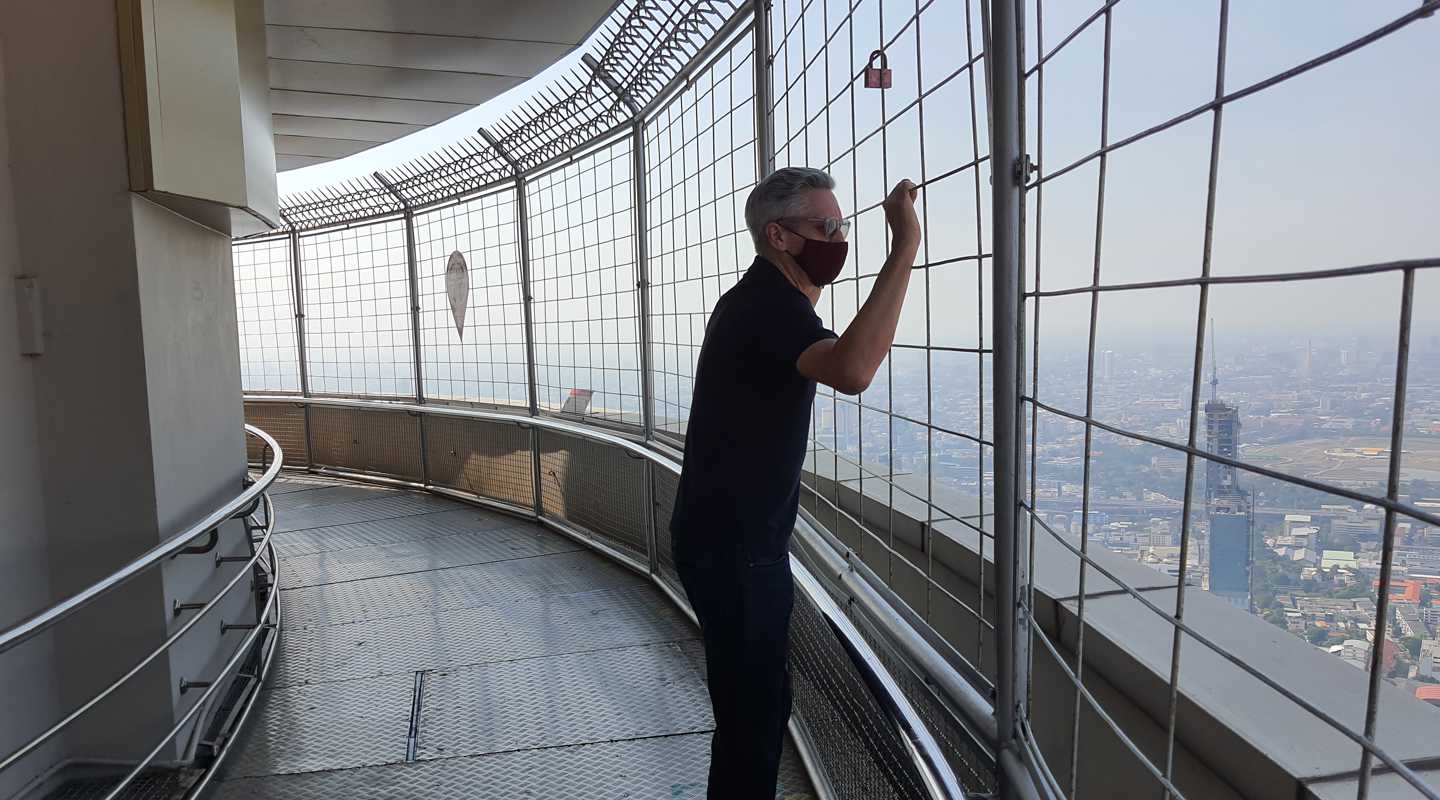 After lunch, we made our way to the Sky Terrace and Sky Bar, the highest points of the hotel accessible to the public. The revolving Sky Terrace reminded me of the vantage point at the Tokyo Tower in Japan, except where the queues for the Tokyo Tower are unbearably long, we had the Baiyoke Sky's version all to ourselves. Again, the joys of travelling in these pandemic times. We finished the afternoon by knocking back a welcome fruit punch in the Sky Bar.

Our evening buffet (as well as breakfast) was taken on the 81st floor (The Bangkok Balcony) and although I've eaten in far more convivial and ambient surroundings, I couldn't fault the selection or quality of the food. I dined modestly on imported Australian lamb chops and seafood pizza while my wife did what Thais do and scoffed her body weight in oysters and what looked like giant prawns. 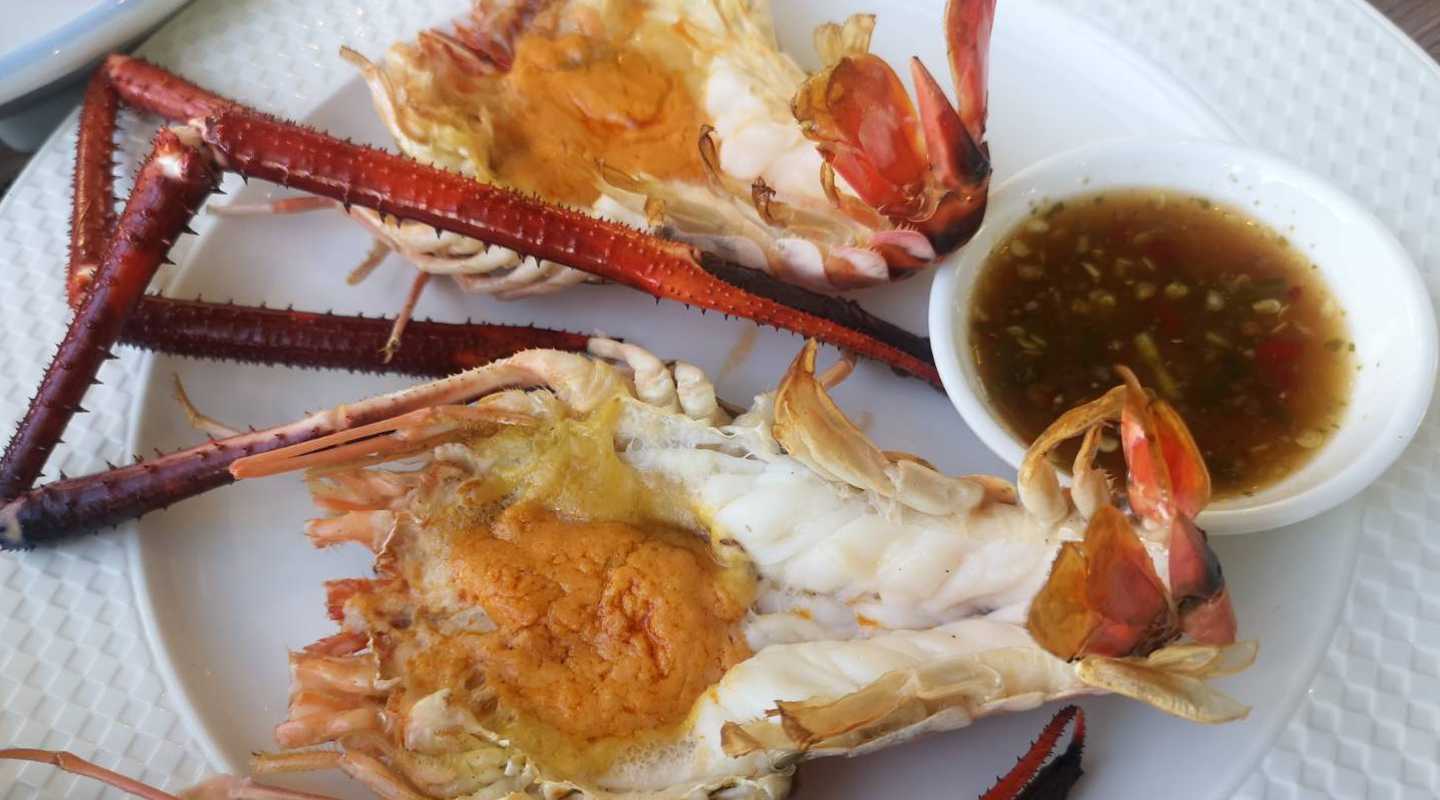 After dinner, it was back to the Sky Bar to cash in our four drink vouchers. As part of the package, we were allowed to order alcohol but only from a list of well-known cocktails (beer would've cost extra). I'm ashamed to say I was the one sat in a corner frantically Googling 'Singapore Sling' and 'Pina Colada' to ascertain what each drink contained. I didn't have a clue. I've just never been a cocktails man. But they certainly packed a punch and after drinking my own two glasses as well as one of Tun's, I retired to bed nicely sozzled. 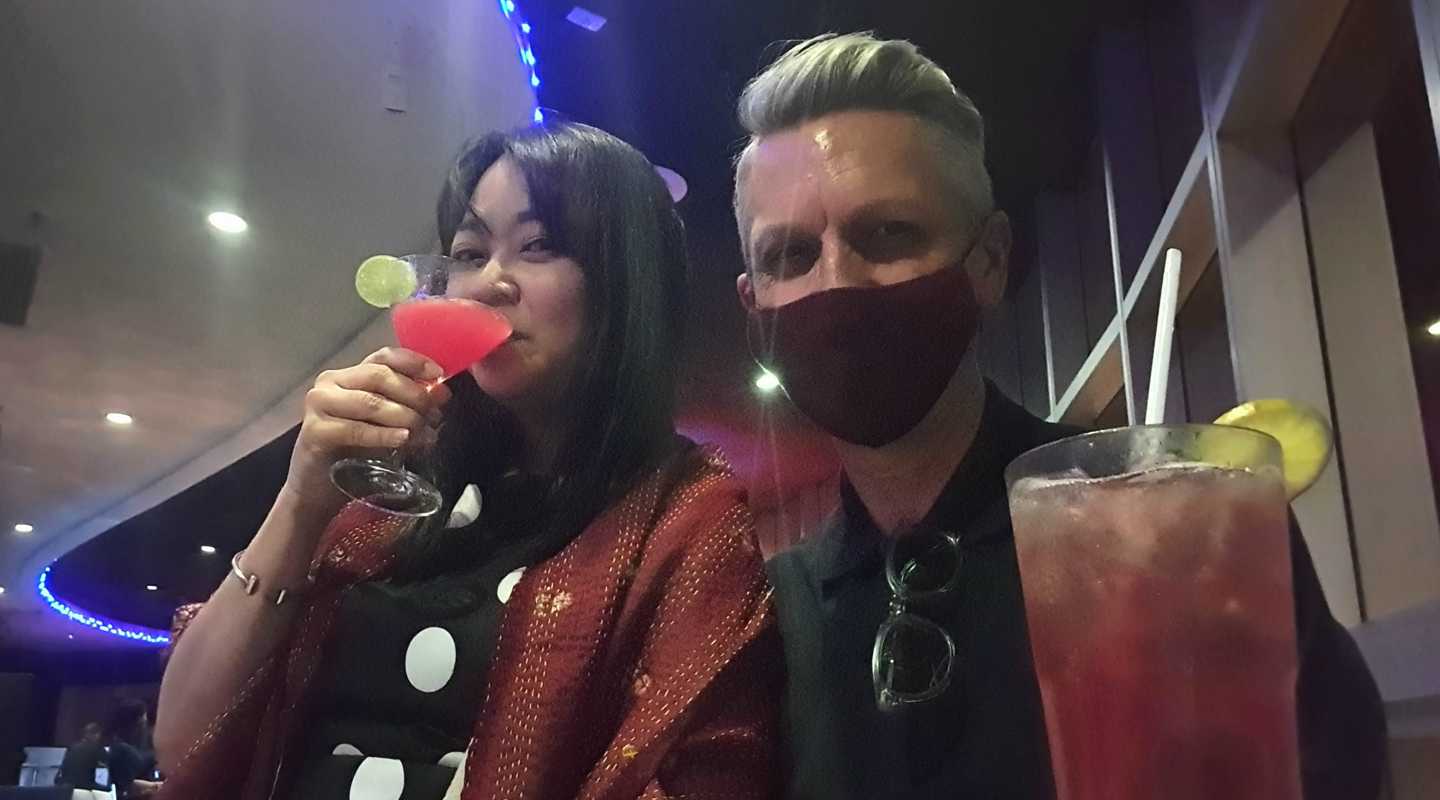 The following day after a good buffet breakfast and the opportunity to stuff my face with pathong-ko (Chinese donuts), we thought we'd enjoy a stroll around the adjoining Pratu nam streets. I hadn't set foot in this area for almost 30 years so it was a real trip down memory lane.

The street markets with many of the forlorn-looking vendors offering tourist tat to non-existent tourists had all set up for the day but we wandered into the Platinum Mall, half a dozen floors of retail shops catering mainly for youngsters at the low-end of the fashion market. Feeling 21 again, I bought a loud beach shirt from a seller purely because I felt sorry for her. She looked as if she hadn't seen a customer for quite some time. We got chatting and when the inevitable 'how has Covid affected business?' question came up she said that she was just about surviving on the money that Thai customers brought in but losing the Indian and Middle Eastern tourists had been a major blow. Hopefully it won't be long before they return and the cash till is ringing again.

The day before we checked into the hotel, I had looked on Google street view at home and was pleased to see a nearby street that was nothing but Indian restaurants from one end to the other. Feeling peckish and hoping for one of those basic Indian eateries with grubby windows and formica table-tops, where you scoop up spicy curry with chunks of garlic naan rather than cutlery, the street wasn't difficult to locate but alas, only one establishment had survived. Every other restaurant was padlocked and in darkness.

We stuck our head in the door to ask what time the sole survivor opened but I was disappointed to see the menu prices were definitely on the high side for that standard of restaurant; it was also unbearably hot. I can never understand the logic of only turning on the air-conditioning when you have your first customers of the day.

We did a sharp about turn and with our options dwindling, decided to pay a second visit to the Baiyoke Floating Market. Now more experienced, we were able to purchase coupons, order food and skillfully avoid any hotel staff wearing black suits (walking quickly past them and avoiding eye contact at all times was easily the best tactic)

After an afternoon nap, we checked out around 5pm. Yes, all-in-all a very enjoyable experience. Keep your eyes open for those hotel promotion deals. We're off to do Pattaya next!