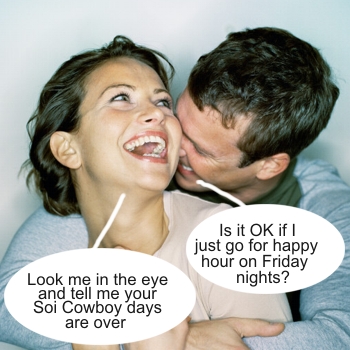 This is not so much a blog as a friendly teacher helpline. I recently received the following e-mail from a lady called Sarah.

I am single and in my thirties. I will be moving to Bangkok in August 2011 to work as a teacher in an international school. I would like to meet other single foreign men (teachers would be great!) and date while i'm there. I did live in Bangkok for 2 years (2002-2004) but during that time I was in a relationship so I did not experience the single life. I am just wondering if I should prepare myself for a lonely two-three years. Any advice?

I don't get sackloads of communication on this topic, but you do wonder just how many teachers are out there looking for love among their own kind in a country that's world-famous for......*cough*.........initiating relationships with local people.

Several months ago, I got an e-mail from a teacher who was thinking of starting up a dating website aimed purely at foreign teachers looking for relationships with other foreign teachers in Thailand. So at least one budding entrepreneur recognized the problem existed and saw a potentially lucrative gap in the dating site market. I'll confess I wasn't really sold on the idea but it would certainly make a refreshing change from browsing through the gazillions of Thai dating sites with pages of grainy photographs of overpowdered gold-diggers all describing their English as 'minimal' and looking for a foreign man with a good heart between the age of twenty and ninety.

This whole topic of relationships comes up regularly on the ajarn discussion forum. Although I'm no Dr Ruth where dating and mating are concerned, I always get the impression many of the guys who post their thoughts are still nursing the battle scars of failed relationships back in their homeland. Relationships between a foreign man and a Thai woman might not be perfect, but they are often uncomplicated. And for many men that's good enough. But perhaps there are significant numbers of single male teachers out there who are tired of dating outside their own culture and want something a bit more challenging? Perhaps the opportunity to take a partner to a movie and then afterwards over coffee, discuss the director's use of camera angle and primary color - instead of asking whether the film was good or not, getting a one-word answer, and then continuing the taxi journey in silence.

But let's go back to Sarah and her e-mail. Sarah's been here before. She knows the ropes. She knows what it's like to live in a city where at times the entire foreign male population seems to be chasing Thai tail. And let's face it - even for those with the personality and appearance of a swamp donkey, Thai companionship is never too difficult to find.

The question is how is Sarah going to connect with like-minded foreign teachers for a few rounds of the dating game? There will no doubt be plenty of opportunity for raucous girly nights out with female teaching colleagues but too many of those can wear anyone down? Eventually one craves for a special night out with that one special person. Just the two of you in a romantic restaurant, gazing into each other's eyes and waiting patiently for your main courses to arrive. And then after a fine meal and several glasses of extortionately priced wine, one of you whispers "your one-bedroom studio or mine?" The perfect end to a perfect evening.

Seriously though, what advice do you have for Sarah? Is she worrying too much? Anyone with experience of playing the farang dating game? Give us your thoughts and comments.

Niels -- i thought the site was based for only Anglo saxons ? Or that was my impression..

Re Tim; Simply have them complete brief bios, complete with e-mail and phone number. If they want to activate their post, they have to confirm their info via phone, which would make it fairly simple to determine if they were a teacher and of what nationality, ex. Brits can identify their countrymen over the phone in 2.4 seconds, as could most any knowledgeable well traveled person/teacher...If a few well educated and fluent, well travelled Thais enter, that's ok, no need to be as exclusive and xenophobic as some Thais have been known to be.

I'd say your friend Sarah is pretty much in the wrong place for finding a Western guy. Of course, there are tons of Western guys here in Thailand, but if I were a woman, any woman from any hemisphere, my guess is that they find the pickings to be very slim with regard to good catches.

Western guys come to Thailand to party and live fantasies they can never have at home. Maybe this isn't true for teachers, but the appeal and lure is there, even for them. If a guy wanted a Western girl for his fantasy, he'd go to a European country or America (if looking for verbal abuse only).

To answer the real question: what can Sarah do here to find a match? She could join one of the dating websites, like Tagged, and work if from there. Anything is possible.

so true.. but I still think it would be a good idea. Most foreign men after sometime with a Thai blood sucker get bored of the BS.

Tim the best way i can think of is, photos are mandatory. It can be traced via email address, EG somkit@hotmail is a Thai national. Simple security features. As I was thinking every bar girl, once they found the site would be looking for additional suggar daddies .. This is true

The first concern I would have about this website is how to keep the local Thais off of it. Once they discover it, there is little chance of keeping them out. However, I think the website is a great idea. There is always a market for things like this.

It would be great to meet another like-minded person, preferably a teacher so we can talk shop all the time, discuss lesson plans and rowdy students in bed and exchange our favourite ESL websites. We could discuss world politics, the local education system and maybe the work of Kierkegaard while we're at it. My God this is starting to sound like a nightmare. Why don't male teachers just move to Thailand while females move to Jamaica?
BTW, 20-odd years ago there was no Internet and believe it or not, people still managed to find a partner!

It wasn't all that long ago when the internet dating phenomenon became an acceptable way for home-alone singles to meet their match online. The problem with these kinds of virtual meeting places was that they were just too broad. Talk about looking for needle in a haystack!

These projects had all sorts of people, from all walks of life, at all ages, creeds, colours, sexual preferences, social, economic, and cultural backgrounds. Someone for everyone, you might think, but the reality was that they were just so overwhelming.

There were, and continue to be, an army of scammers ready to break both the bank and cupid's arrow of love for any lonely heart that takes their BS Bait. If there's one gullible group of people out there, it's those desperate for a little love and companionship in their lives.

So online dating became a right ole mess and it was neigh on impossible for genuine singles to separate the wheat from the chaff'. Is Sexy Susan really the slim, busty, big blue eyed 23 year old in the photo, or is she perhaps a 60 year old Bob from Birmingham with his big dangling bollocks hanging out of filthy Y-fronts? Poor Susan (bless her!), would love to have an audio visual with YOU, if only she had enough money for a new computer complete with mic and working webcam!!! Hmm! Now where's that credit card?

WHAT’S ALL THIS CRAP GOT TO DO WITH TEACHER DATING IN THAILAND?

So along came niche dating, and like broad-based dating before it, this too soon became saturated and overwhelming by all the copycat sites that followed. This is why the relatively new sub-niche dating projects are doing so well of late. A tightly focussed dating sub-niche catering for the teaching expats of Thailand could well be a real winner if built right and promoted in the right way. So unlike Hippolyte above, I happen to think it has the potential to work very well.

This brought a smile to my face, and a welcome one at this time of year. Christmas is always difficult in a distant land when those dear to you are a long way away.

Never gave dating sites time of day before and can't see that changing, its all guess work by some third party.

However love or finding love sells!.... but count me out for many reasons.

I think it would be a good idea. go for it ! I am sure many expats in Thailand are bored of the same BS game with Thai gf. You know it, the buffalo is sick and dad got a heart attack please baby send money quick or i will be force back into the dangerous bar.. ha ha ha she never left the bar ha ha

Who would sell baloney sandwiches outside a delicatessen? Even more to the point, who would buy them?

Although I welcome people of all ages, colours and idiosyncrasies, I wouldn't fund a website like you described. This is probably one of the worst ideas ever. This has got to be a joke, right? What's next? A website for English teachers who want to sell their second-hand towels and apparel? A jumble sale for English teachers? An English teacher nag-a-thon? ROTFLOL