Note: The conversation written here did happen, but it's not a word for word account. It is the general gist/summary with some attempted humour thrown in. No names are mentioned out of respect and deference to my Udon kup kua.

License plates. On the surface, not a terribly exciting topic. Thailand, however, is an onion and there are often twists and layers to the everyday mundane. License plates are one of those things. Unless you ask and probe a little you would probably never know. It's one of those fantastic details you notice in a country with all sorts of small peccadilloes that often leave one scratching their head. It's the weird charm of it all if you will.

In Thailand, license plates have a much different meaning than most farang are accustomed too. It took me two years in the country before anyone cared to mention it. One of the biggest status symbols / face boosting things you could do and I had never heard about it. Just another layer of the onion peeled off for me by complete chance. 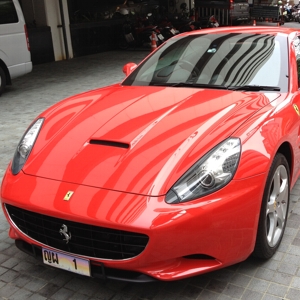 I was at a birthday party in Udon celebrating with my mother and Thai homestay family. I had taken a bus from my current school in Sakon Nakhon and was picked up in a Toyota flatbed at Sawang Daeng Din, a small district of Udon. From there it was off to the amphoe and Thai family that hosted me on my first trip. Things were shaping up rather nicely for the evening.

After the dinner and whisky had been flowing for a while and the karaoke was in full swing the father started giving away money to people by drawing names out of a hat. One girl got 5000 baht (150 bucks) and was excited because it matched her monthly salary. Then something confusing happened. She ran over to my homestay dads brand new Honda CRV and took a picture in front of the car. Ok, pretend like the car is yours haha. I get it. Except she bent down and got a close up next to the license plate. Weird. It had a tropical background airbrushed on it and the number was "44", but I didn't see the big deal.

The next morning I was still curious about the lady and the photo from the previous night. I asked my homestay mother what the deal was. She told me the license plate number "44" costs about 120,000 baht ($4,000). All of the following happened in Thai:

"Well yeah Zach of course. Thais like numbers and they really like lucky ones. We don't want to crash our car or have ghosts haunting our wheels for the rest of our lives. So we buy numbers for good luck."

"Ok, but which numbers and how much?"

"Glad you asked Zach. My husband got these, but they aren't the best numbers."

"Not a joke. It's lucky and it's good for the police. If you have 9's they'll never stop you. Basically all the top people in the country have license plates like that. The cops see the plate and don't do anything - no matter what."

The smile crosses my mouth, lips start to quiver. Finally, I give in and join the laughter. Thailand. The country where you can literally buy 'get out of jail free' cards.

Final Note: If you're wondering about the number 1 red Ferrari in the picture it's also 1 million baht according to the Thai security guard I asked.

If you have any comments, thoughts or personal stories please feel free to drop me a line:

I had one stop-over occasion, when police officer stopped me and demanded to see my driving license. I didn't have one on me, although i possess the Thai license. They then demanded money which i had but decided not to give them because i knew that they won't know what to do with me if i'd refused. After about 5 minutes, they let me go because i swore I'd give them my license as i was living nearby. Lucky break, some might say.

Zach, thank's for the information. I will take extra precaution to car's with 9999 digits.

"I can’t believe you didn’t know this. Not to mention red plates for ‘new cars’"

I didn't know it either and I've been here over 20 years. Probably because I have zero interest in cars and always have.

I can't believe you didn't know this. Not to mention red plates for 'new cars'

Keep em coming Zach, its great to hear from someone who actually bothered to learn the lingo and explore the culture. Good job.

I'll keep an eye out for these now!