In my book Settling in Thailand one of the subjects I deliberately avoided discussing was relationships with Thai partners.

This was partly because the topic has been explored to death by generations of foreigners who have had Thai girlfriends or wives and partly because I do not believe anybody in love with a Thai woman would pay any attention to any thoughts or advice (negative or positive) on the topic written in a book.

Having said this, I do think it is worth saying a few words on the practical topic of deciding where to settle with your Thai partner.

The decision can be a tricky affair as it involves two people from different cultures, different social attitudes and speaking different languages having to decide how they can live together and both be happy. And eventually, this involves the uncomfortable reality that one partner will have to ‘sacrifice’ or compromise and accept the other’s culture and living conditions more than the other way round.

To offer some insight, I can compare and contrast how I chose to handle this, as compared to some ex-colleagues who also have Thai wives / girlfriends.

In my case, I met my wife when I was transferred from the UK to work here and we worked and lived together here in Thailand for three years before getting married. We then left for the UK and lived there for five years, mainly because of my need for career advancement (and as it turned out, hers too).

Looking back, relocating to the UK was the best decision I ever made (or, in truth, my wife made for me).

Without exposing her to my ‘culture’, to British lifestyle, transport, humour, social attitudes, politics, TV, sport and so on, I am convinced that we would have drifted apart in Thailand. And this is in spite of the fact that I could already speak Thai fluently by the time we left Thailand.

In our case, we then moved to Singapore (again because of my career) and then back to London and now back to Thailand all over again - and we may not necessarily settle here for the rest of our lives.

In contrast, all of my ex-colleagues with Thai wives chose to move back to the UK together immediately and have settled there permanently. The reason, though, for their decision was the same as mine – the male partner’s career. And, in the case of a couple of friends who have Thai girlfriends and have chosen to stay here, again, I suspect it is mainly because they have good jobs here, earning good money and good prospects for the future hence staying here is sensible.

The key to things working out is how the partner who accepts living in the other partner’s country takes to the lifestyle and attempts to integrate.

For my wife, while she had work colleagues with whom she would go out for drinks after work and we had friends who we would occasionally meet up with, in the main, she was not fully comfortable with life in Britain from a social perspective. And of course the weather and the relative scarcity of Thai food compared to Thailand took its toll over time.

In contrast, the friends who have Thai partners and live here in Thailand have taken to Thai life completely and speak Thai fluently and have built a life for themselves that is not too dissimilar to a typical middle class Thai family’s. And similarly, the wives of my ex-colleagues all speak English fluently, like living in the UK and, appreciate the ‘better’ lifestyle the UK can offer and have no thoughts of returning to Thailand (apart from yearly holidays).

The decision on which country to live in, depends very much on which partner is more willing to take on the other’s culture.

Where problems arise are where the decision is based on necessity e.g. one partner’s career, proximity to one partner’s family etc. and  the other partner cannot adapt to his / her new life. Cue the foreign man in Thailand who has a Thai partner but hangs out with his expat buddies in bars every other day and talks only of all the negative aspects of life in Thailand (from his perspective).

In some cases, he takes his Thai partner along and the poor woman is forced to sit through and endure and smile on request while her expat partner chats away to his mates in English and only brings her into the conversation when it is about a reference to Thai food or something similarly mundane.

Invariably, this type of expat cannot speak Thai to any meaningful level, has no intention of learning and always gets frustrated when misunderstandings occur due to language or cultural barriers. By no means is language a pre-requisite and there are probably many long-term foreigners here who speak limited Thai but are happily settled here but in most cases, this is probably because their Thai partner speaks perfect English and / or the foreigner himself is the kind of individual who fits in to new environments easily i.e. the patient, ‘go-with-the-flow’, culturally aware and mature type.

I suspect there are many expats who are living in Thailand unhappily. For all of Thailand’s charms and pleasures, I suspect they only offer temporary relief to many foreigners who are ‘stuck’ here for one reason or another.

By no means do I think that speaking Thai would solve all of their problems but can anyone imagine an immigrant into the UK (or US, Australia etc) who can barely read anything in written form, cannot understand most things being said around them in public, cannot say anything apart from ordering food and other basic requests, cannot understand TV or radio, cannot read a newspaper etc?

In essence, that is the life of the expat in Thailand who does not speak Thai and it is only mitigated by the fact that English is international language of the world so he can get by without speaking or understanding Thai.

But the point here is, the refusal to learn the language is an indication of the expat’s wider discomfort with the reality of life in Thailand. He wants to stay so that he can enjoy all the bits of Thai life that he likes but does not want to deal with the fundamentals that underpin life here. So, is it any wonder that these foreigners always seem to come across something in Thailand to complain about, something to compare to how things are done back home and conclude that the Thai way is ‘wrong’.

Is it any wonder that these foreigners often have relationship problems with Thai women and get frustrated with the Thai partner’s duty to her family and all that that involves. How long before the expat tires of being taken back to the family home of his wife and plonked on a chair (or more often, on a cushion on the floor) and left there unable to speak to anyone and treated as someone who needs to be handheld like an infant.

Cross-cultural relationships are challenging in the best of circumstances. One party within the couple needs to have a strong desire to take on the other party’s culture, language and lifestyle. Even where the Thai partner speaks good English or the Westerner has learnt Thai, one partner often needs to ‘yield’ more than the other to give the couple some sense of direction and stability of life.

While it is usually the (Thai) woman in the relationship who does this, where it is the expat Westerner who chooses to live in Thailand with his Thai wife, he needs to take on all the challenges of life here, preferably but not absolutely necessarily, learning to speak Thai fluently too.

The chances are, if the Westerner has good career prospects here, can speak Thai and can lead a normal life here (without resorting to hanging out at expat bars all the time), the relationship with a Thai woman will have a good chance of success too.

Stephen is co-author of a great new book on planning a life in Thailand.

Planning your new life in Thailand isn’t easy. There are many hurdles to jump and potential frustrations galore. From practicalities through to cultural issues, from finances to fitting in and making friends, there is so much to learn. Luckily, you will find all the basics explained in this 282 page book.

Settling in Thailand takes a broad, insightful and balanced approach – neither too cynical nor evangelical, this book sets a precedent in terms of presenting a positive but realistic and non-judgemental description of Thailand life for foreign residents.

Written by two British expats in Thailand, and with interviews with another 13 expats from around the world, you will get first-hand experience, advice and explanations of expat life in Thailand. With a combined 150 years of Thai experience this book is the ultimate guide to making sure your move and settling in Thailand goes smoothly. 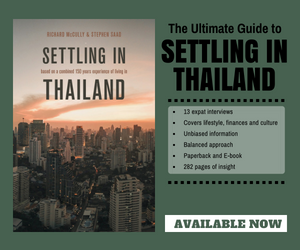 Here's how this goes in a nutshell...

1 - You meet an awesome Thai girl who loves you.
2 - You both decide you want to go back to your home country.
3 - She's excited about her future and her friends are jealous.
4 - You move back home, bag a great job and life is sweet.
5 - She starts to get bored and homesick.
6 - You're an idiot so you agree to ditch your job and move to Thailand.
7 - You move to Thailand, bag a decent job and life is OK.
8 - She's getting fat and lazy and you're doing all the work.
9 - You've had enough and move to another city.
10 - You hate Thailand and slag it off online!