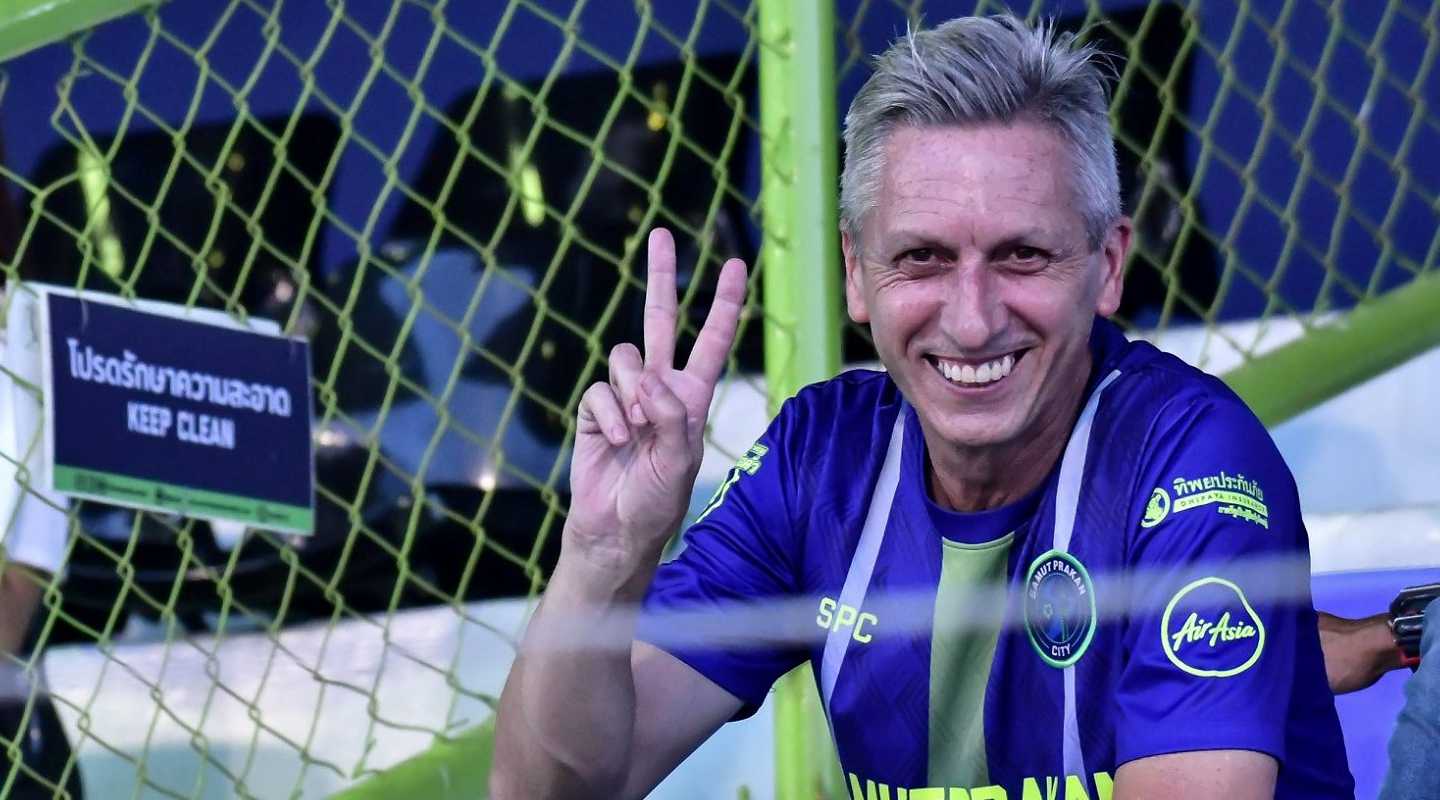 Samut Prakan have been drawn at home to Army United from Central Bangkok. They are currently lying second in the M-150 Championship, which is the second tier of the Thai football league.  Although I'm sure a good cup run would be most welcome, Army United's top priority must surely be to gain promotion back to the Premier League.

(footnote: M-150 - the sponsor of the championship - is one of those caffeine-laden 'energy drinks' that taxi drivers sip in order to keep awake during 18-hour shifts)

Army United are having a decent season then?

The wheels have come off a bit in recent weeks. Despite being second in the championship, they're on a run of four games without a win. Hopefully, that poor form continues this evening. 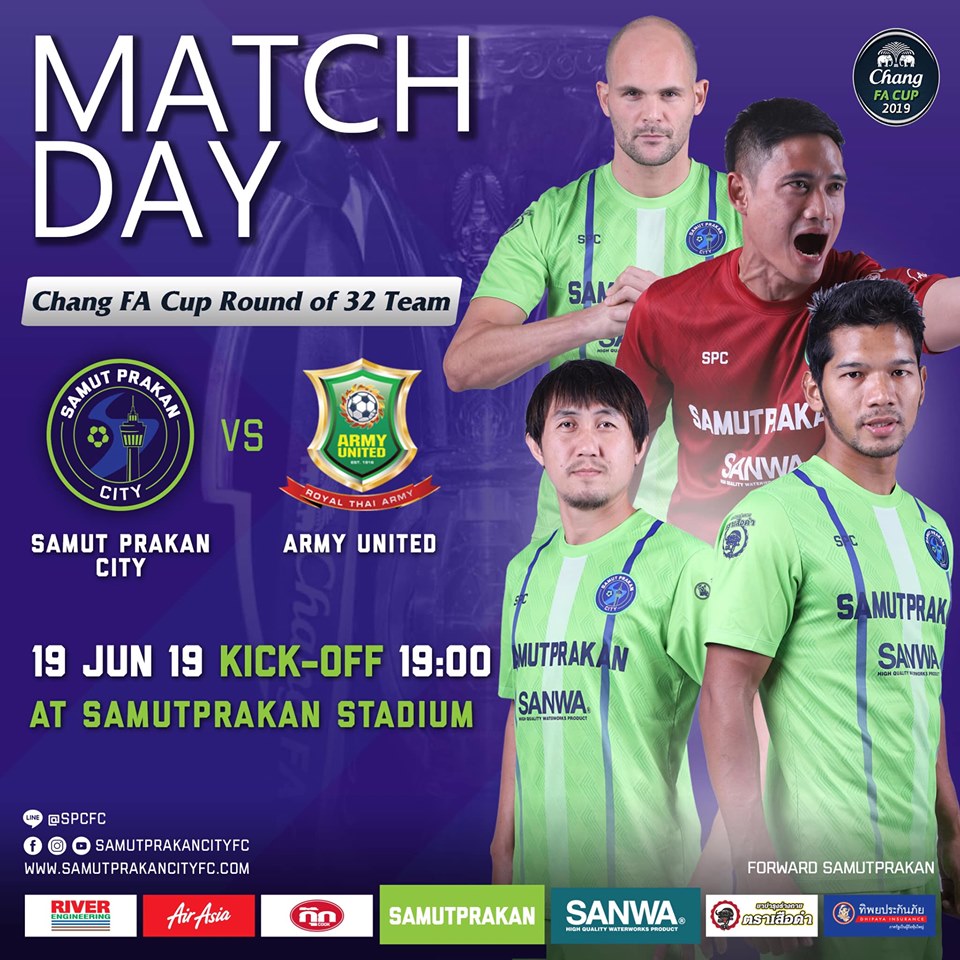 And they are one of the oldest clubs in Thai football?

Actually, they are one of the oldest football clubs in Asia. They were founded as The Royal Thai Army as far back as 1916, but it wasn't until 2010 that they became officially known as Army United FC.  Over the last 20 years, they have been something of a 'yo-yo team' flitting between first and second tier on a regular basis.

This is the 'Gentleman Rangers' third successive season in the M-150 championship, after last being relegated from the Premier in 2016.

Interestingly, until 2011, Army United had a strict policy of only fielding teams made up of Thai nationals and army personnel, but as the Thai League progressed and other clubs started importing foreign talent, Army United looked on enviously and the policy was scrapped.

So they've got a few foreigners knocking about then, including presumably the token Brazilian?

Yes, his name is Rennan Oliveria, but whatever he's achieved in his football career doesn't seem worthy of a mention on Wikipedia.

Apart from him, there is Bruno Pinheiro, a defender who made a handful of appearances for the Portugal U-20 team over 15 years ago. His most successful club period seems to have been in Cyprus, where he played 55 times for Hapoel Haifa.

There's also midfielder Jonathon Zongo from Burkino Faso and goalkeeper Hassan Sunny from Singapore. Sunny, who apparently switched from being an outfield player to wearing the goalie's jersey because of asthma, has kept goal 81 times for the Singaporean national team and this is his second spell at Army United.

A retired Argentinean footballer by the name of Daniel Blanco. I'm not going to list the clubs he played for. Trust me - it's a lot!

It feels like one of those midweek 1,500 attendances in the making?

I would have thought so. The 7.00 pm kick off (as opposed to 5.45 or 6.00) does at least give supporters an extra hour to make it to the game but even so, I don't think the interest in the FA Cup's early rounds is that high. I'm not sure how many fans Army United will bring either. I'm guessing not that many despite the relatively short journey.

Just out of interest, there are 32 teams remaining in the competition. How many of the 16 premier league sides are still in it?

It looks like eleven of them are playing in this round - so five teams must have fallen at the first fence. Another one is sure to go out this evening in an all-premier league clash between Port and Sukhothai.

Would you like Samut Prakan to have a good cup run?

Of course. But unfortunately, I'll miss the next round - the round of 16 - because I'll be on a short break in Bali and I would definitely miss the semi-final because it clashes with my annual visit back to the UK. That would be tough - to miss an FA Cup semi final.

OK, what about tonight's team line-up?

The new manager's strategy was obviously to give some of the squad players a run out. In fact I think it was a 'weaker' Samut Prakan side than the one we put out at Thonburi University in the League Cup and there were several players I really wasn't familiar with. One kid had legs like two broom handles and looked about 14.  However, the manager had packed the substitute's bench with first team regulars, probably with the idea of bringing some of them on if things were going pear-shaped. And as it turned out, we were going to need them! 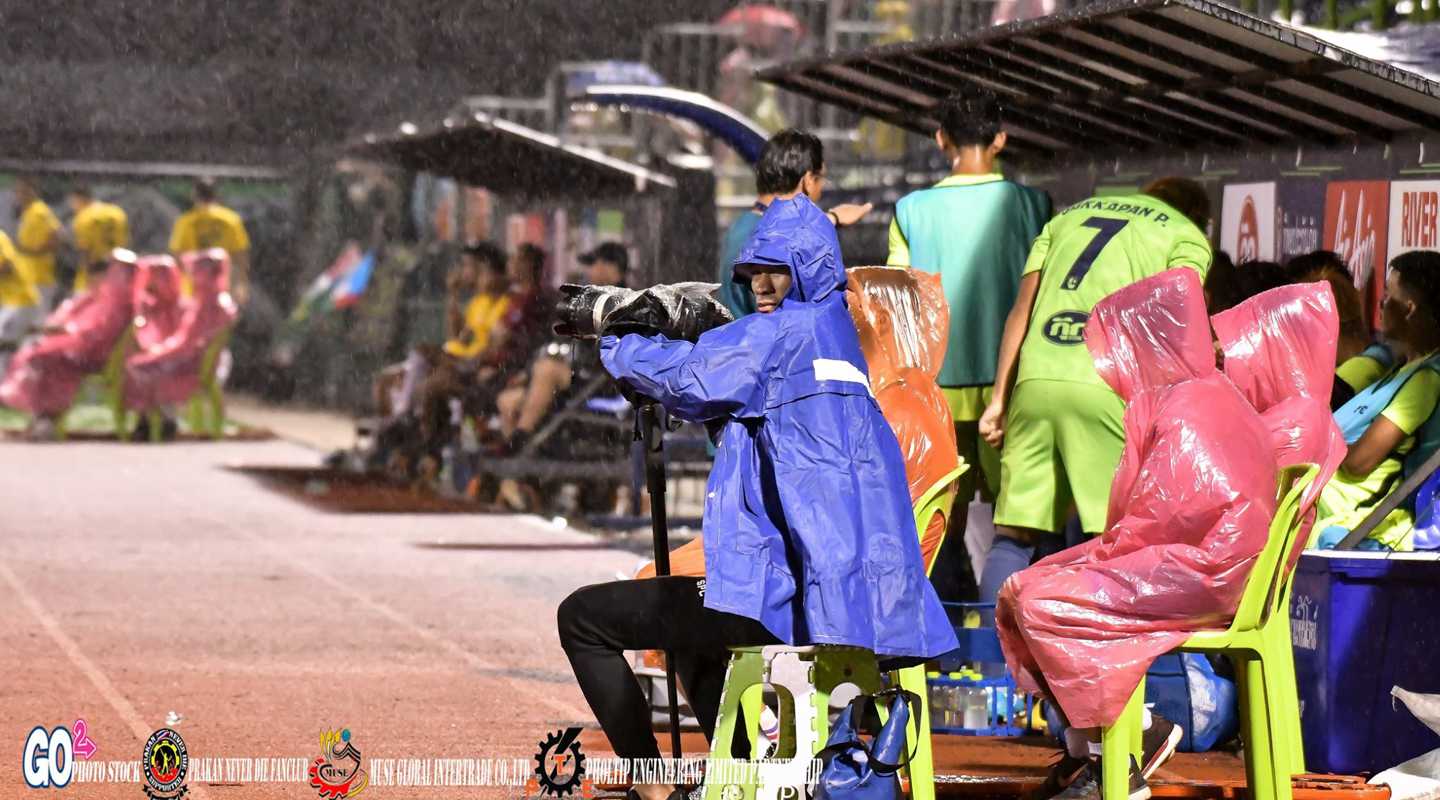 So let the cup action begin. What about the first half?

In a word, forgettable. Both teams created half chances and conjured up the odd long range effort, but it was largely a stop-start midfield battle with both teams struggling to find space.

As you would expect, the Army United lads were physically fit, strong and well-organised and were winning most of the 50/50 challenges. Samut Prakan were in for a game tonight. This would be no easy passage into the next round.

The ref blew for half-time and right on cue, the heavens opened and it didn't stop raining for the rest of the evening. Those fans in the uncovered seating areas scurried to put on plastic macs and put up umbrellas. Or they just sat there and got soaked.

A better second half in the driving rain?

Much better. You wouldn't have predicted a goal fest based on what we had witnessed in the first 45 minutes, but that's what we ended up with.

Regular starter, Jakkapan Praisuwan, was introduced as Samut Prakan's first substitute in the 59th minute and instantly we looked like a team with more bite.

The first goal came midway through the half with crowd favourite, Kyaw Ko Ko, picking up a lofted through-ball from midfield and slotting past the advancing Army goalkeeper. A very well-taken goal and 1-0 to the home side.

The game then took a distinctly feisty turn as Army looked to muscle their way back into the contest. Several nasty challenges went in and there were a number of heated exchanges on the touchline involving management staff. Oh, we had a cup tie on our hands alright!

With the stadium clock indicating a minute left of normal time to play, the home fans would have been forgiven for thinking about who they fancied in the next round but Army United aren't going to surrender that easily. The midfield number 9 has picked out attacker, Jedsadakorn Kowngam, in space and he's unleashed a worldie from well outside the box and into the top corner. There's a stunned silence as the Samut Prakan faithful realise they're going to be here for at least another half hour.

♫♫ Peep! Peep! ♫♫ Samut Prakarn 1 Army United 1 after 90 minutes so into extra time we go as the rain starts to fall even heavier. 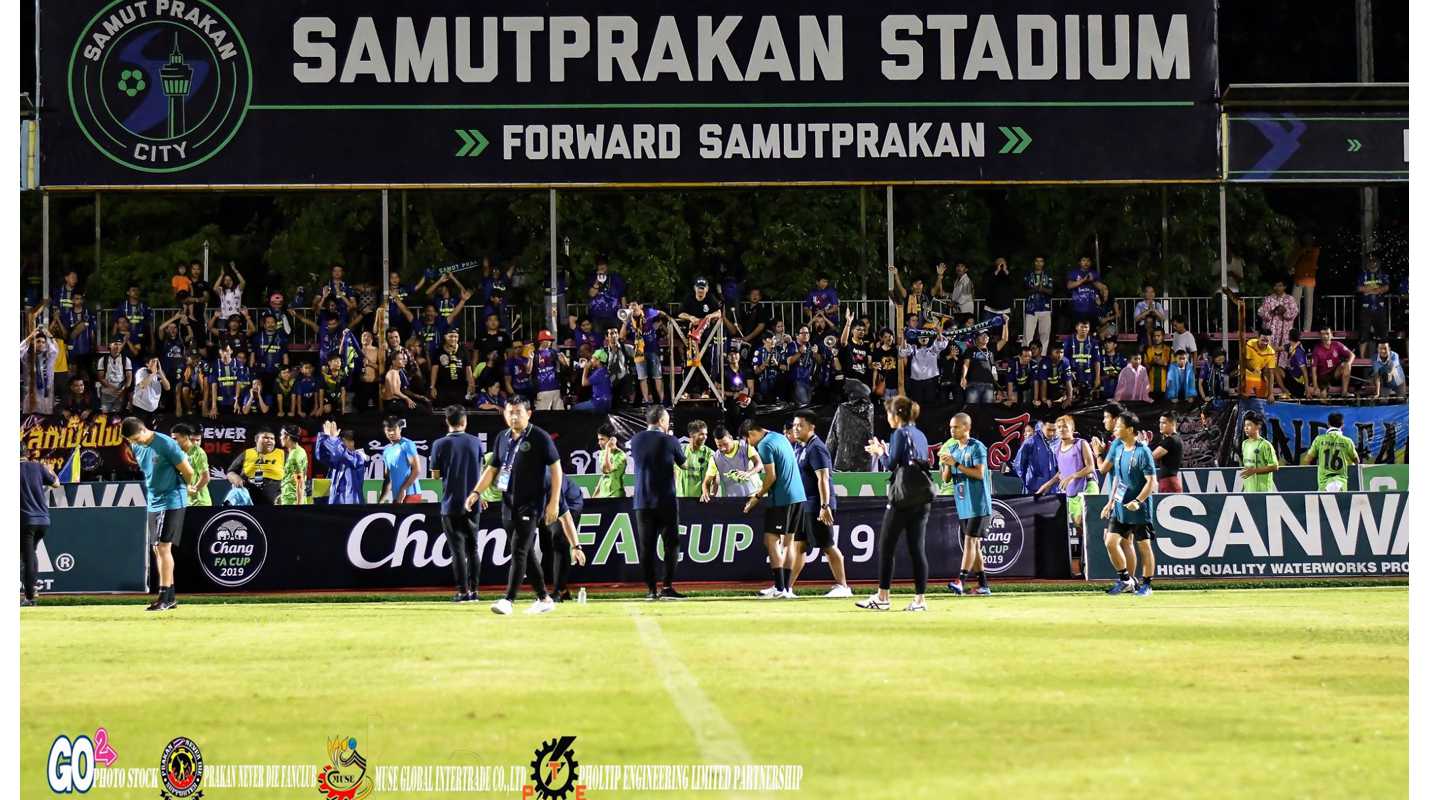 I don't think there was any danger of that with the way both teams went at it in the extra time period.

Samut Prakan threw on a big gun in the shape of Teeraphol Yoyoei. If there's anyone who's going to get you a goal, apart from Ibson Melo (who remained an unused sub) it was surely Teeraphol.

But forget about that momentarily because seven minutes into the first period of extra time and Army United have taken the lead. Jedsadakorn Kowngam, still dizzy from his last gasp equalizer, turns goal provider. He finds himself in acres of space on the left and plants a delicious pinpoint cross onto the head of Mongkol Tossakrai and the striker is not going to miss from there.

2-1 to the visitors and an FA cup exit starts to feel like a very realistic possibility.

Samut Prakan send on another first-teamer - Nopphon Ponkam - but as the ref is checking his watch for half-time, it's that man Teeraphol (I told you so!) who puts us back on level terms. Fellow substitute Jakkapan delivers the cross and Teeraphol applies the finishing touch with a loopy old header that seems to take an age to find the net. But find the target it does and we're back in the game.

The second period of extra time is all Samut Prakan and it's Boworn Tapla, the four-goal hero of the previous round, who makes it 3-2 on the night. The substitutes do the damage again as Jakkapan chips the ball from midfield to find Teeraphol in space on the right, and his slide rule pass into the box is scooped into the net by Boworn for a very well-worked third goal. You're now beginning to feel it's our night.

Suddenly all hell breaks loose on the touchline as managers, assistants and substitutes leap from their respective dugouts and start pushing and shoving and squaring up to each other. I haven't a clue what it's over but at least one of the Samut Prakan management team ends up given his marching orders.

With just five minutes of extra time remaining, young Panuwit Jitsanoh adds a fourth goal from a Boworn Tapla assist. Game over. We're well and truly in the hat for the round of 16.

Phew! That was too close for comfort. It felt like we got out of FA Cup jail tonight. Naturally the manager would have had an eye on the big league match this coming weekend, so he gambled on a 'reserve team' line-up. But once again, he got the tactics spot on. He selected a bench full of star players to call upon if necessary and true to the script, they ended up saving the day.

Full credit to Army United who were more than equal opponents for 110 minutes. It's not difficult to see why they are second in their respective division and who knows, probably every chance of playing us in the Premier League next season. 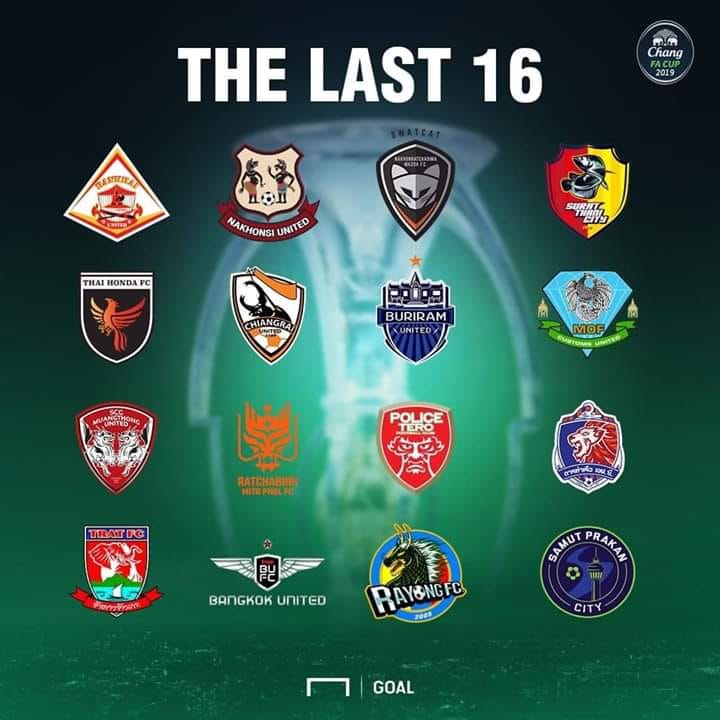 Plenty of big Premier League teams still in it, including the likes of Port, Buriram, Bangkok United and Khorat. You would want to avoid those if you are truly focused on winning the competition (and I'm still not sure we are)

I suppose the ideal draw would be at home to fourth division Bankhai United, but I'll take a home tie against any team outside the top flight. Let's see if the football gods are in a generous mood come the draw for the round of 16.

We're back to league action on Sunday and it's a big one. Oh boy is it a big one! At home to local rivals Port FC, with possibly over a thousand away fans making the short journey across the city. This is a real chance to test ourselves against one of the best teams in the league and it's going to be a cracking atmosphere.  Bring it on!