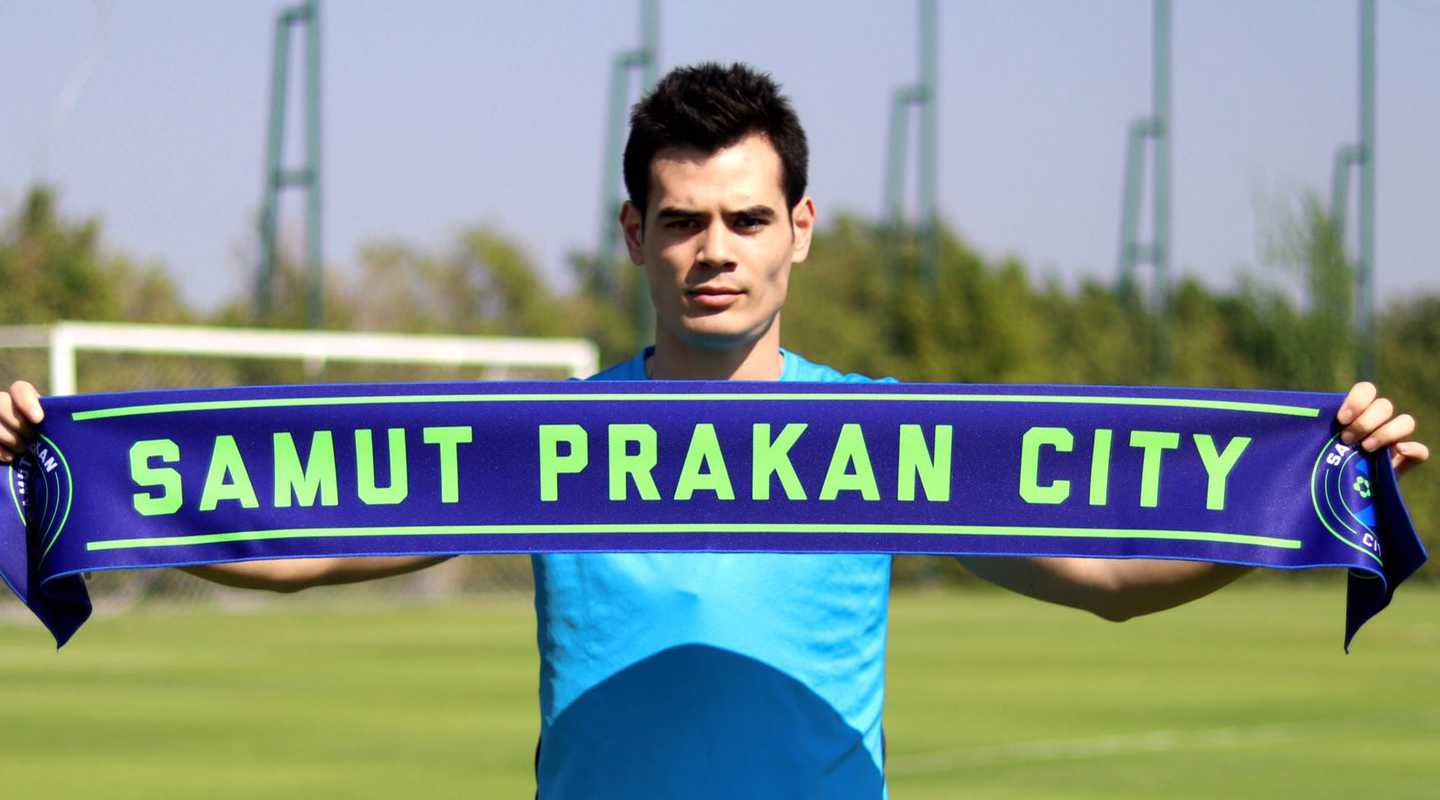 Although there have been plenty of transfer rumours flying around, the first confirmed transfer out is Ernesto Phumipa, our Thai-Spanish defender, who has joined league champions, BG Pathum.  For me, Ernesto was one of our players of the season in terms of consistency. I'm devastated to see him move on and I'm sure many other Samut Prakan fans will feel the same way. I'll miss seeing Ernesto's mother and father at the games as well, even though we were only ever on nodding terms. 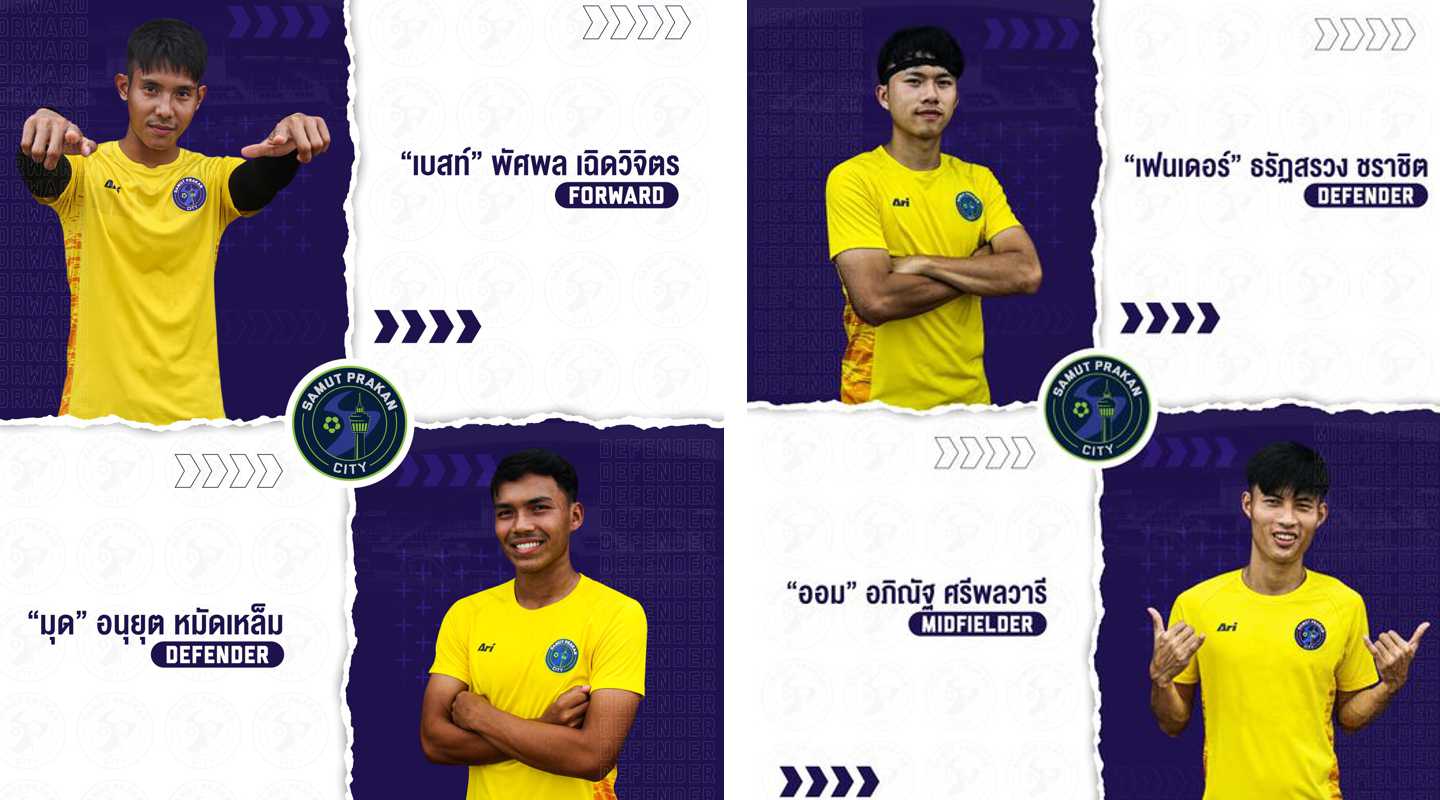 Transfers in this time - and four new Samut Prakan signings to bolster the squad. Firstly a couple of players from Thai football's third tier (T3) - attacking midfielder, Phatsaphon Choedwichit joins from Watbot City, while centre back, Anuyut Mudlem, comes from Pluakdaeng United.  Moving to the right of the graphic, midfielder Thrat Sarangcharachit, was on the books at Chiang Rai United and defender Apinat Siphonwari was with Bangkok FC. (photo credit: Official Samut Prakan City Facebook page) 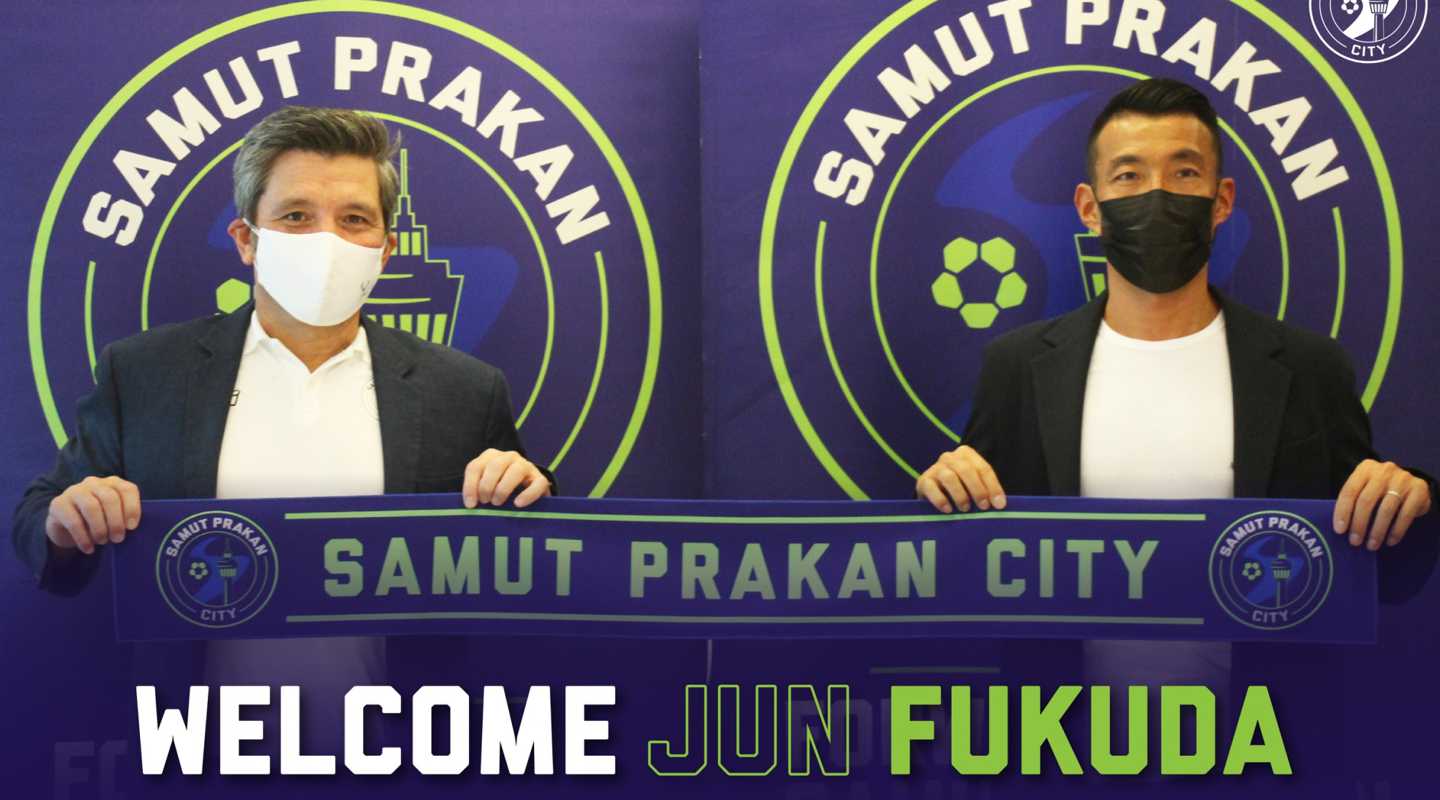 10th May - A new director of youth development

Samut Prakan have brought in experienced 44 year-old Japanese coach, Jun Fukuda, to join the club as youth development director. Jun Fukuda is a UEFA A-Licensed coach and kicked off his career in 2013 managing FC Ulaanbaatar in the Mongolian National Premier League.  In 2018 he went on to coach Lao Toyota FC and took the team to the top of the Lao Premier League for three back-to-back seasons in 2018, 2019, and 2020 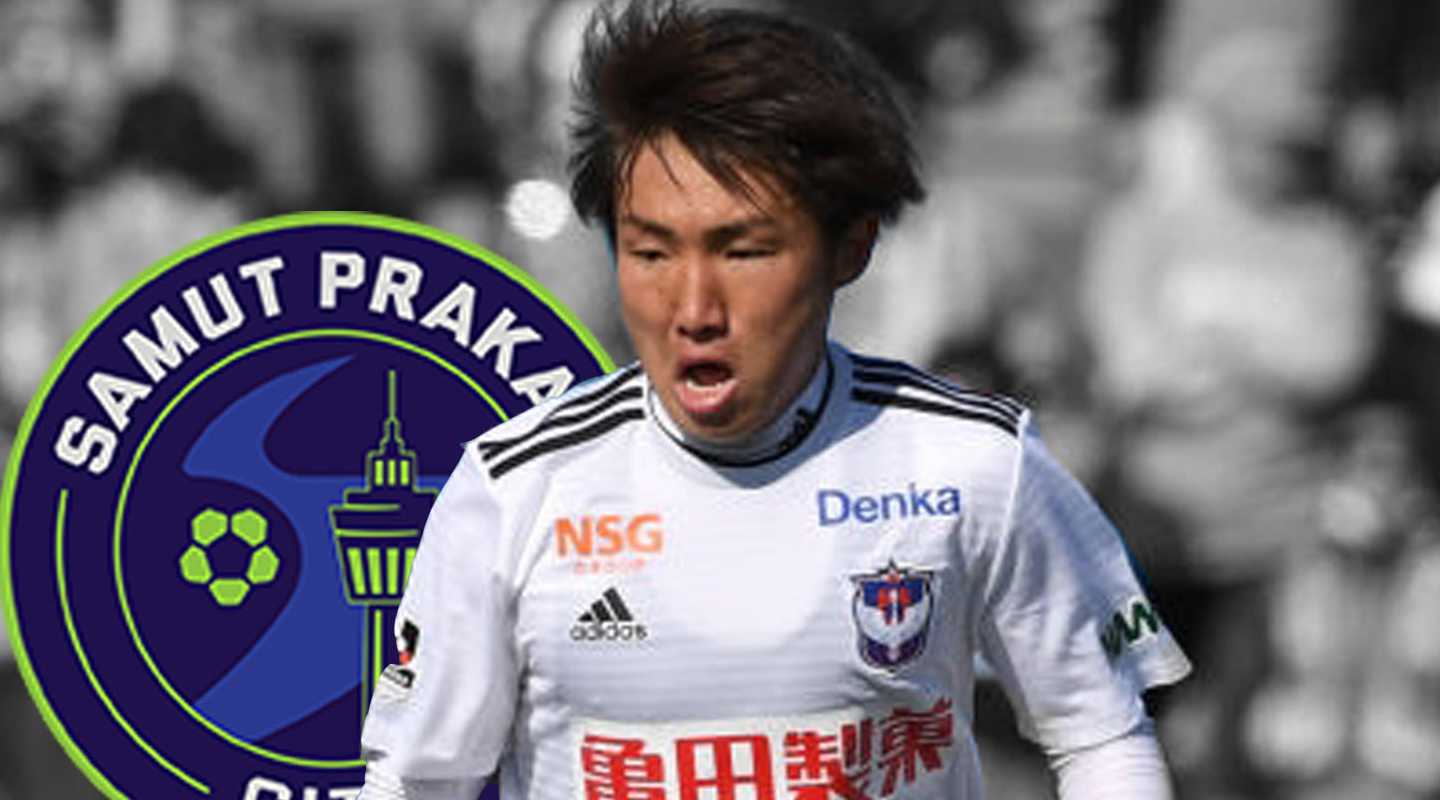 18th May - Daisuke Sakai arrives to strengthen the midfield

Samut Prakan have signed Japanese attacking midfielder, Daisuke Sakai. The 24-year-old from Nagasaki has represented Japan at both U-17 and U-20 levels but has spent most of his domestic career flitting between the second and third levels of the Japanese league system. He also had a season in Belgium but made just three appearances for his club. 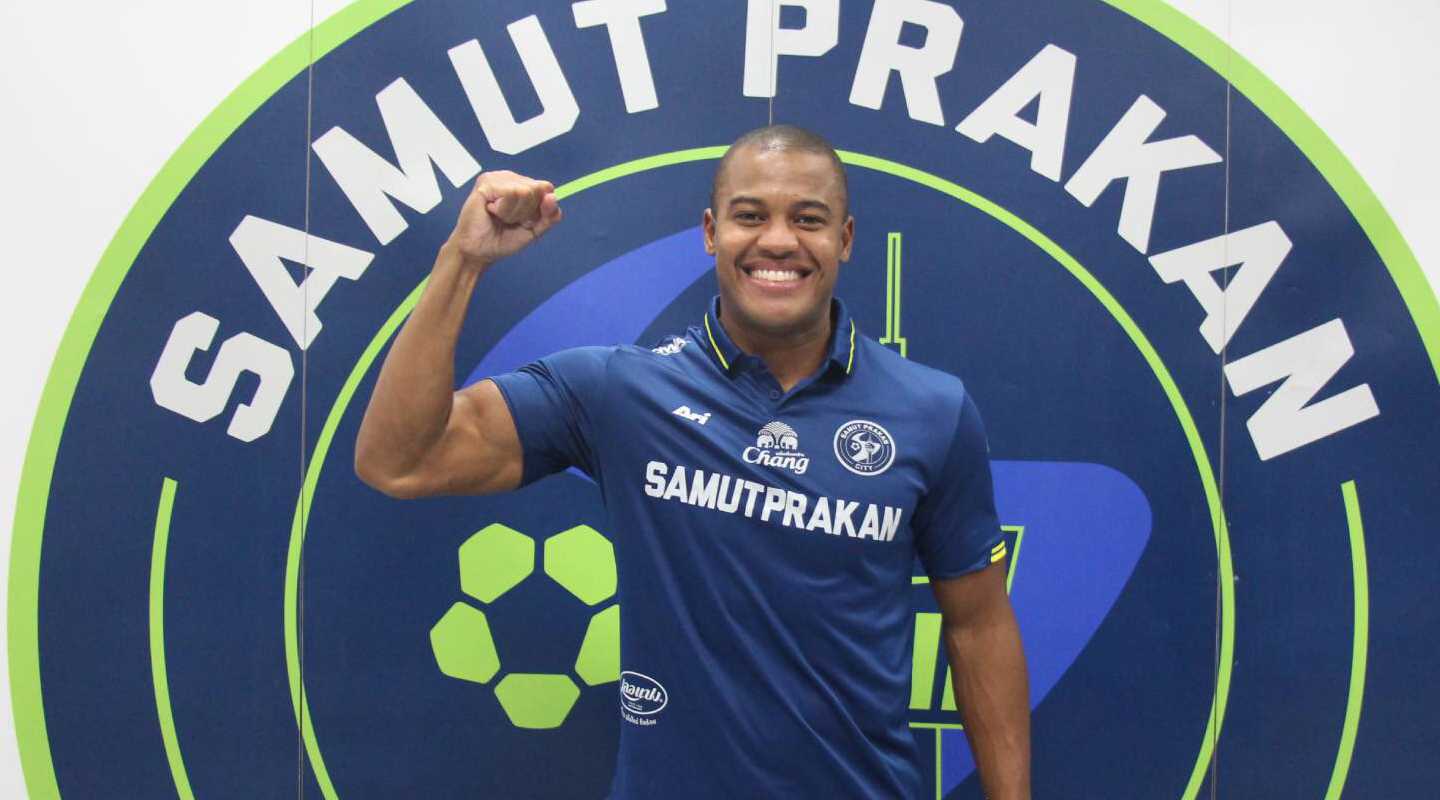 19th May - Eliandro to bring some Brazilian magic to Bang Plee

Samut Prakan have made what I would call their first major signing with Eliandro dos Santos Gonzaga, thankfully shortened to just 'Eliandro', arriving from Chonburi. It's going to be a huge task to follow the Brazilian strikers that have gone before him - Ibson Melo and Barros Tardeli - but I liked what I saw of Eliandro in Chonburi's run to the FA Cup final last season. He's a big, strong lad and with the right service, I think he could do very well for us.

The 31-year-old from Sao Paulo is the classic journeyman footballer with a staggering 18 clubs on his resume. Samut Prakan will be his 4th Thai League club having played for Chonburi, Suphanburi and Chiang Mai FC. He doesn't seem to stay at any club for more than a season. 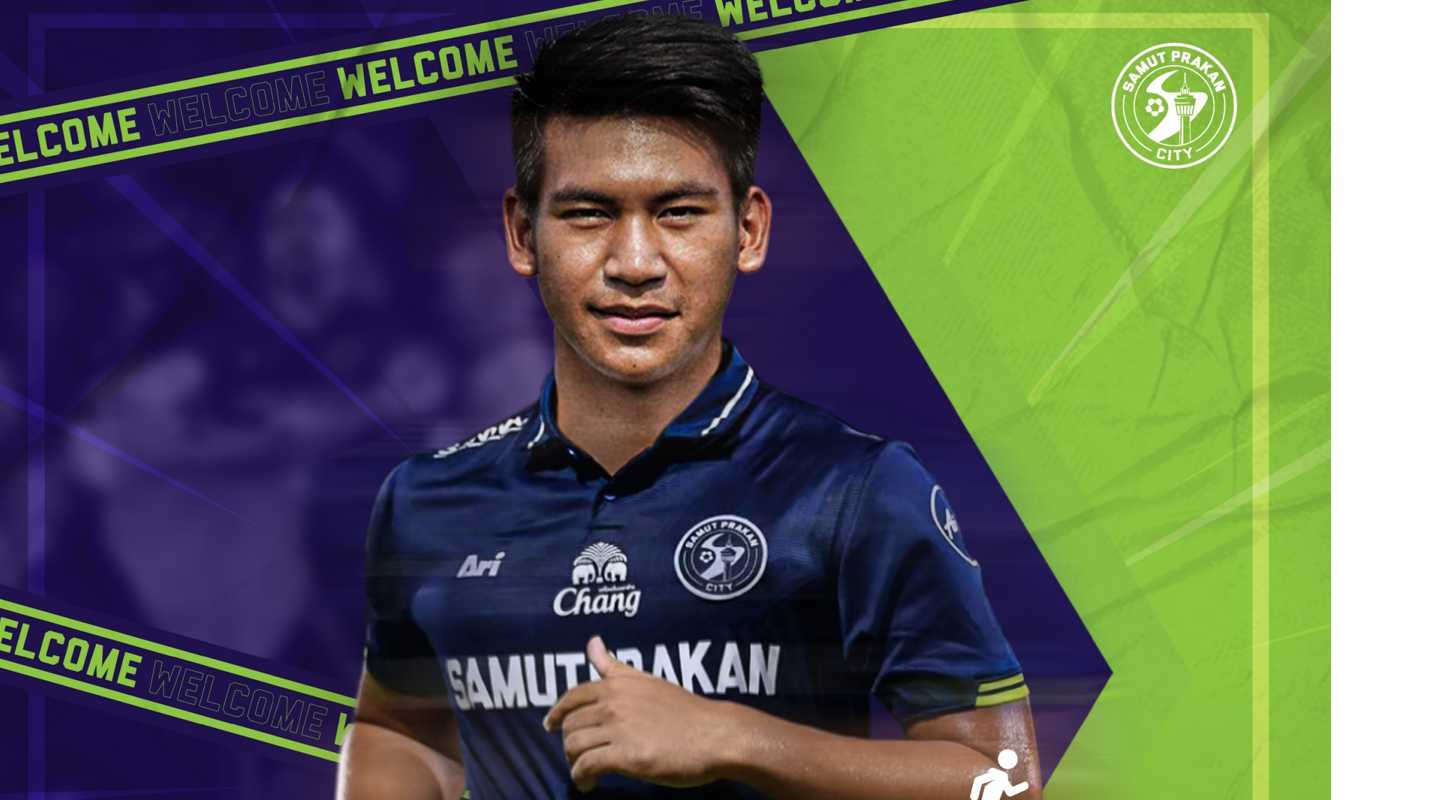 Thailand U-23 international, Kittipong Sansanit, has joined Samut Prakan to challenge for the left-back position. There's no information about him at club level (not that I can find) so it's unlikely he was anywhere near the Muangthong first team last season. In fact, I got in touch with Grant, a Muangthong fan, on Twitter, and he had this to say - "I was excited about him when he was younger, but he stagnated. We sent him on loan to Udon, but then he had to drop down to T3 to play. I watched him a few times last year and he didn't stand out. Former Thai U-19 captain though, the potential is there, but several players were in front of him at Muangthong. The move to Samut Prakan could be just what he needs" 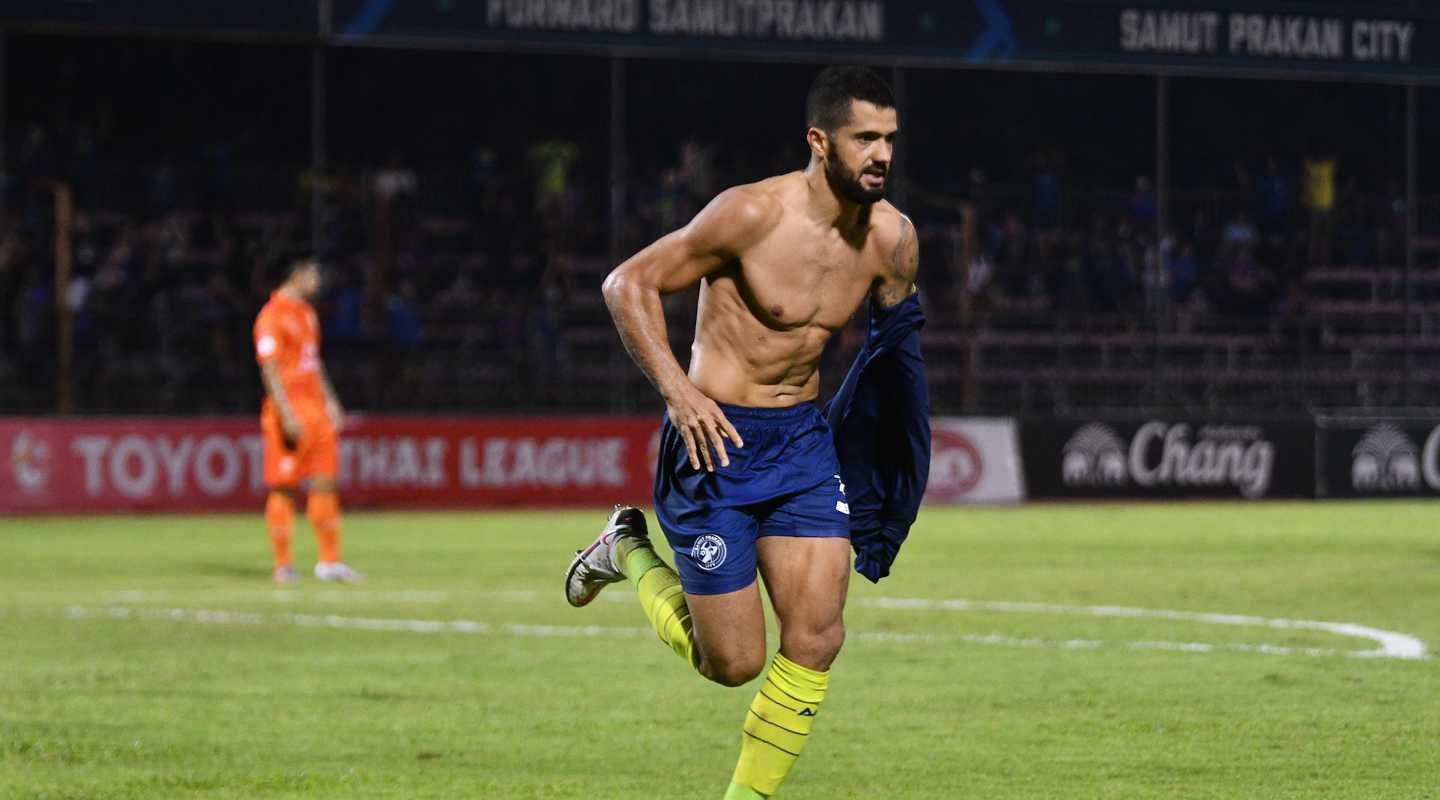 After deals with both Port FC and Buriram failed to materialize, Barros Tardelli has eventually decided to play in Korea. We wish him well. 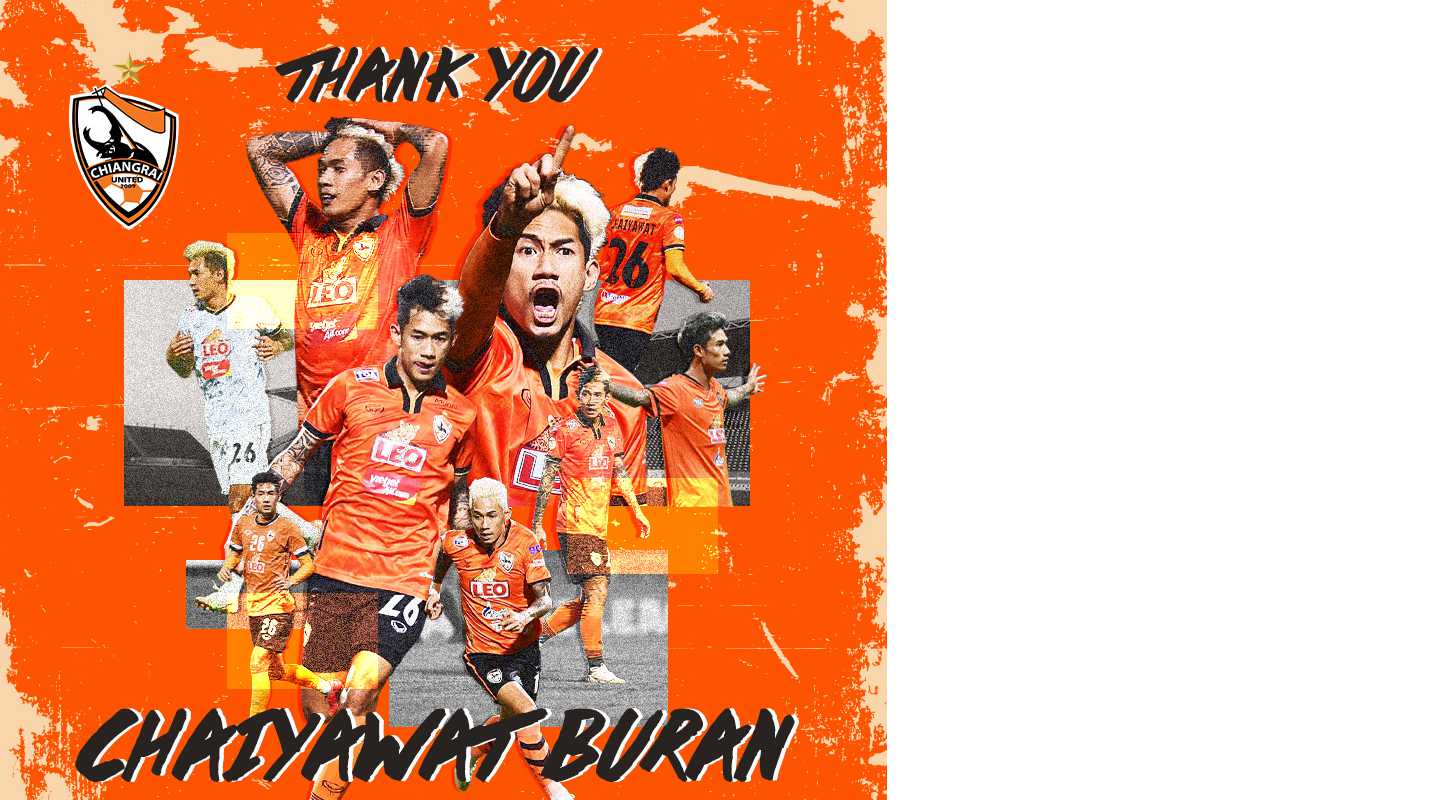 Another signing to get excited about as Chaiyawat "Ball' Buran joins us from Chiang Rai United.

This is a player with some pedigree. The 24-year old winger made 21 appearances for the Thailand U-23 team and played almost a hundred games for Chiang Rai between 2017-2021, which includes of course their championship winning season.

I asked around for opinions on social media and hardcore Chaing Rai fan, Alec, described him as 'one of our best and most consistent players during the title-winning season'.  Port fan, Tom, was rather less charitable and said "he's a horrible little player (from an opposing fan's point of view) Pretty effective - but a really nasty piece of work. We all have them of course, but in my opinion, he's one of the worst"

That's just want I wanted to hear, Tom. Every club needs players like this in their team, someone who can get opposing fans up off their seats for all the wrong reasons.

Actually, this is almost a case of a player returning home to the club in his heart. Although Chaiyawat started his playing career at Muangthong in 2014 and made 9 starts for The Kirins, he was swiftly sent out on loan to Pattaya United (now of course, Samut Prakan City) and played 43 games, scored 8 goals and became something of a local hero. I've also heard that during recent periods of injury, he's even been spotted at the odd Samut Prakan game as a spectator. Welcome home son! 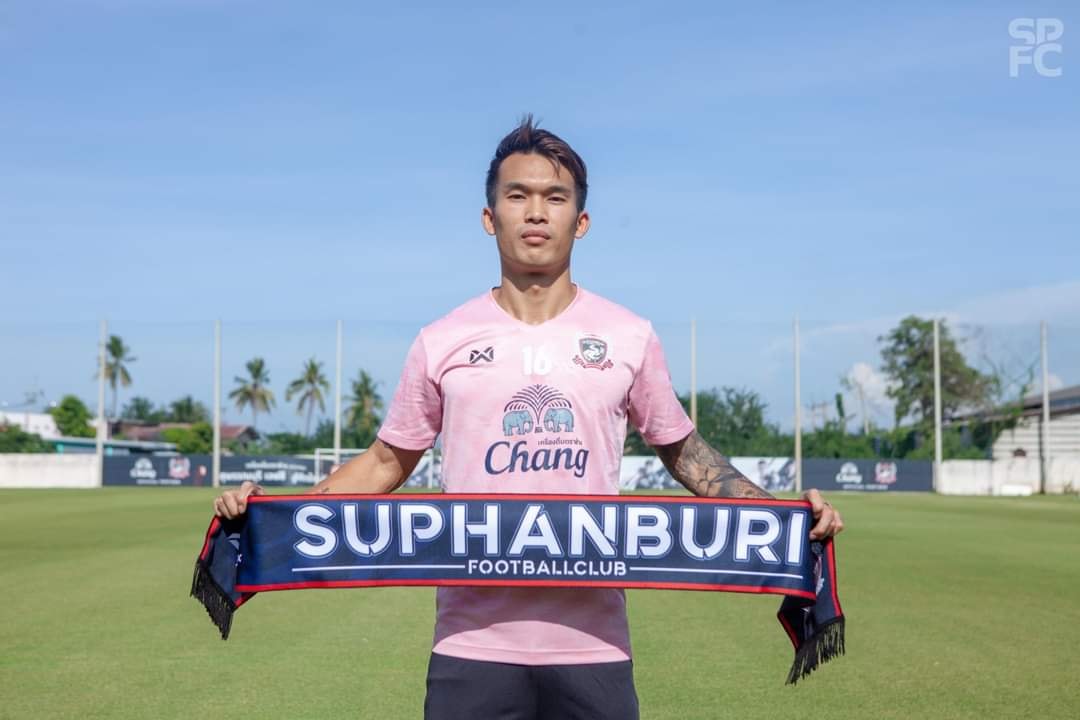 Apichai Munotsa has bid Samut Prakan farewell and signed for premier league survival specialists, Suphanburi. He is one of 7 signings that The War Elephant have made this week, in fact. 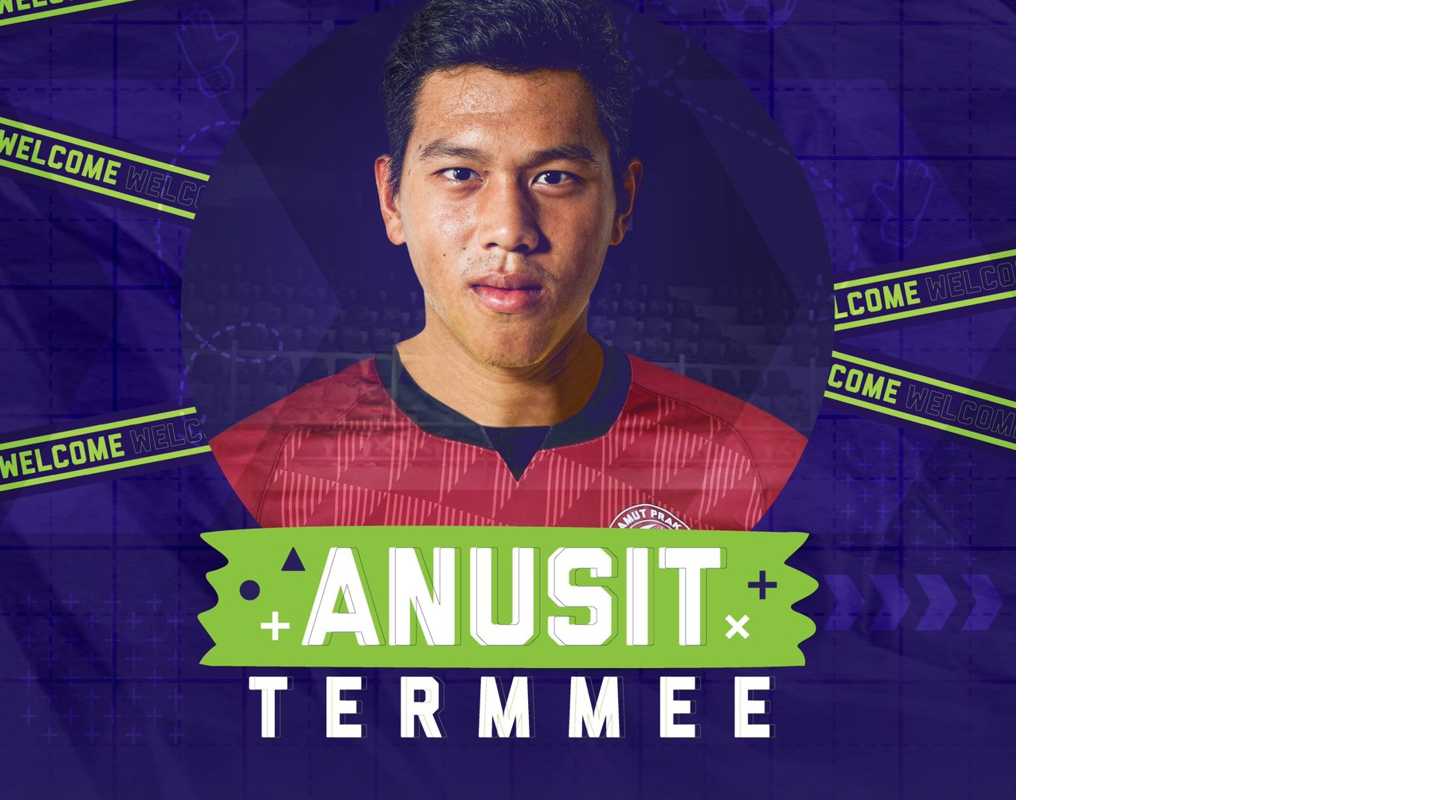 6th June - A new deputy between the sticks!

Samut Prakan have signed goalkeeper Anusit Termmee from Rayong (where he was on loan from Bangkok United FC.) The Bangkok-born Anusit made 15 appearances for the relegated Dragon Horses, all in the second half of the season. With the probablility of him becoming our second choice keeper, it surely means Singaporean international, Izwan Mahbud, will be moving on at some stage soon. 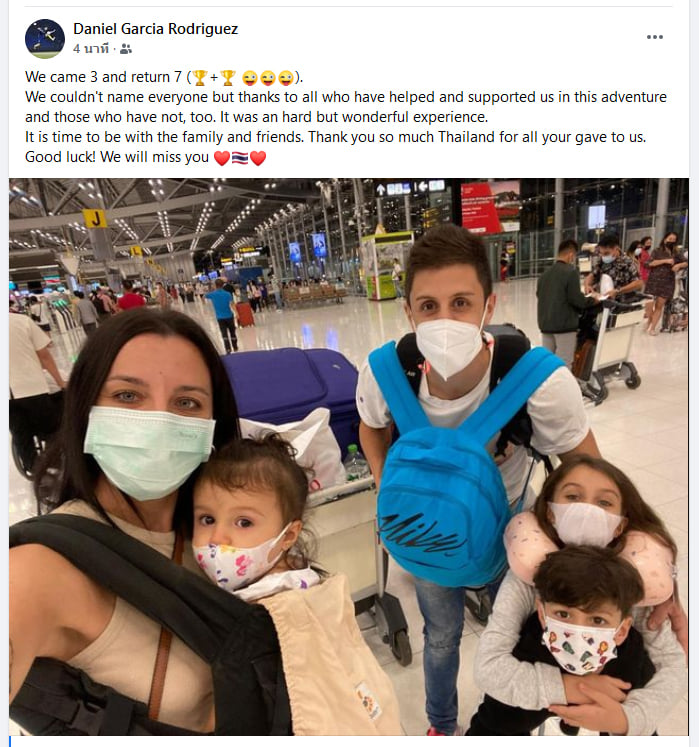 Toti posted a photo taken at Bangkok Airport on his Facebook page to say 'thank you for everything Thailand' and sadly, Toti and family look to be heading home. I read that Samut Prakan had hoped to secure the Spanish midfielder's services for another season (on loan from BG Pathum) but alas, it's not to be. Good luck Daniel. 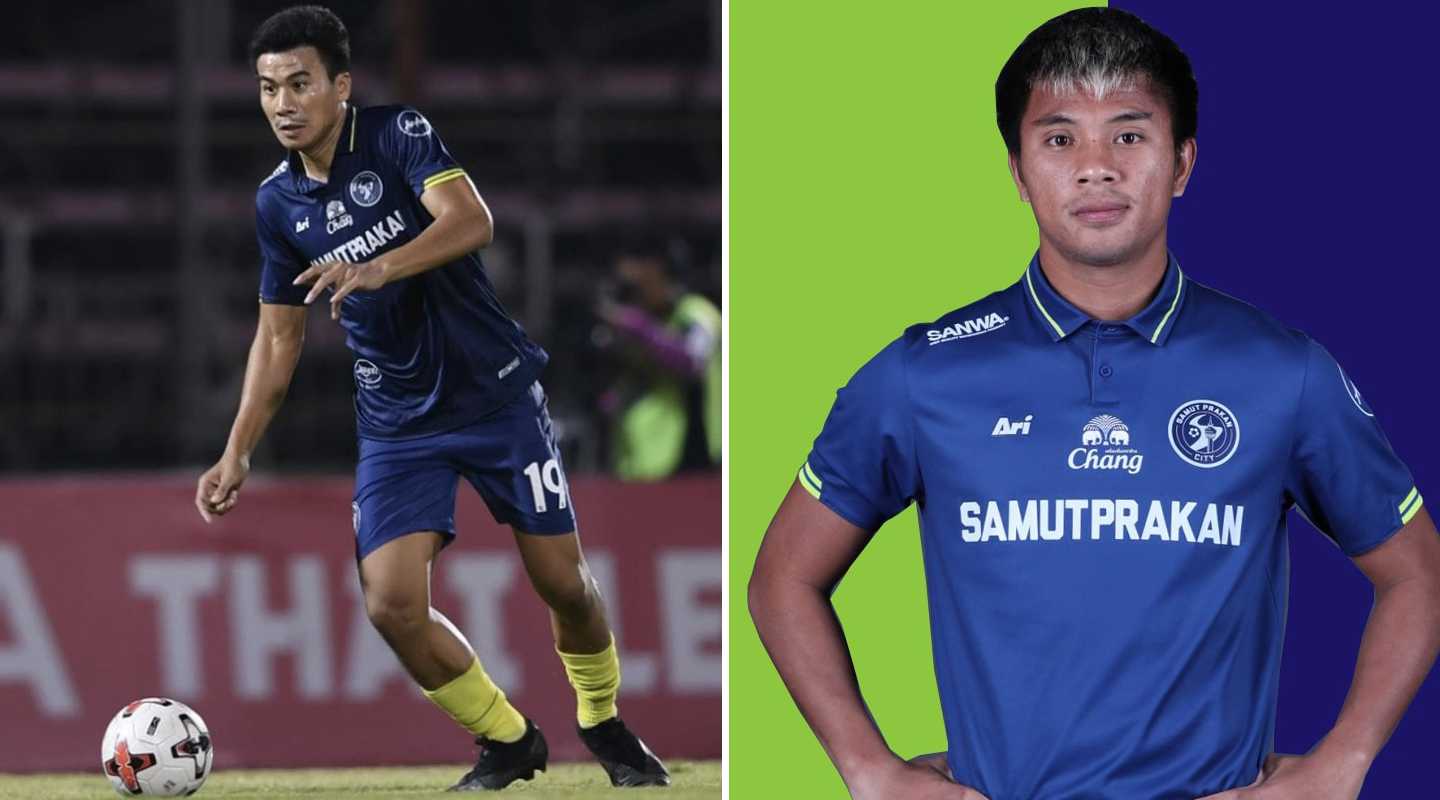 July 19th - Teerapol and Jakkapan heading for the exit door?

It's been a fraught 48 hours for Samut Prakan fans as not one, but two crowd favourites almost certainly look to be heading for the exit door according to the Thai football sites.

Defender and vice-captain, Jakkapan Praisuwan, is planning to move across the city to BG Pathum (where he will join up with ex-Samut Prakan defender Ernesto Phumipan) and striker, Teerapol Yoyei, will sign for Isaan giants, Buriram.

I don't know the details; fans rarely do, but it appears that neither players nor club could come to any kind of contract agreement. And in these situations, it doesn't take long for the moneybag clubs (the likes of BG Pathum, Buriram and Port) to start circling like vultures. I fear this may not be the end of the exodus either.

With almost 150 appearances in a Samut Prakan shirt between them, it's an understatement to say these two guys were fan favourites. They were part of the furniture; two of the first names on the team sheet. They're a serious loss to the club. 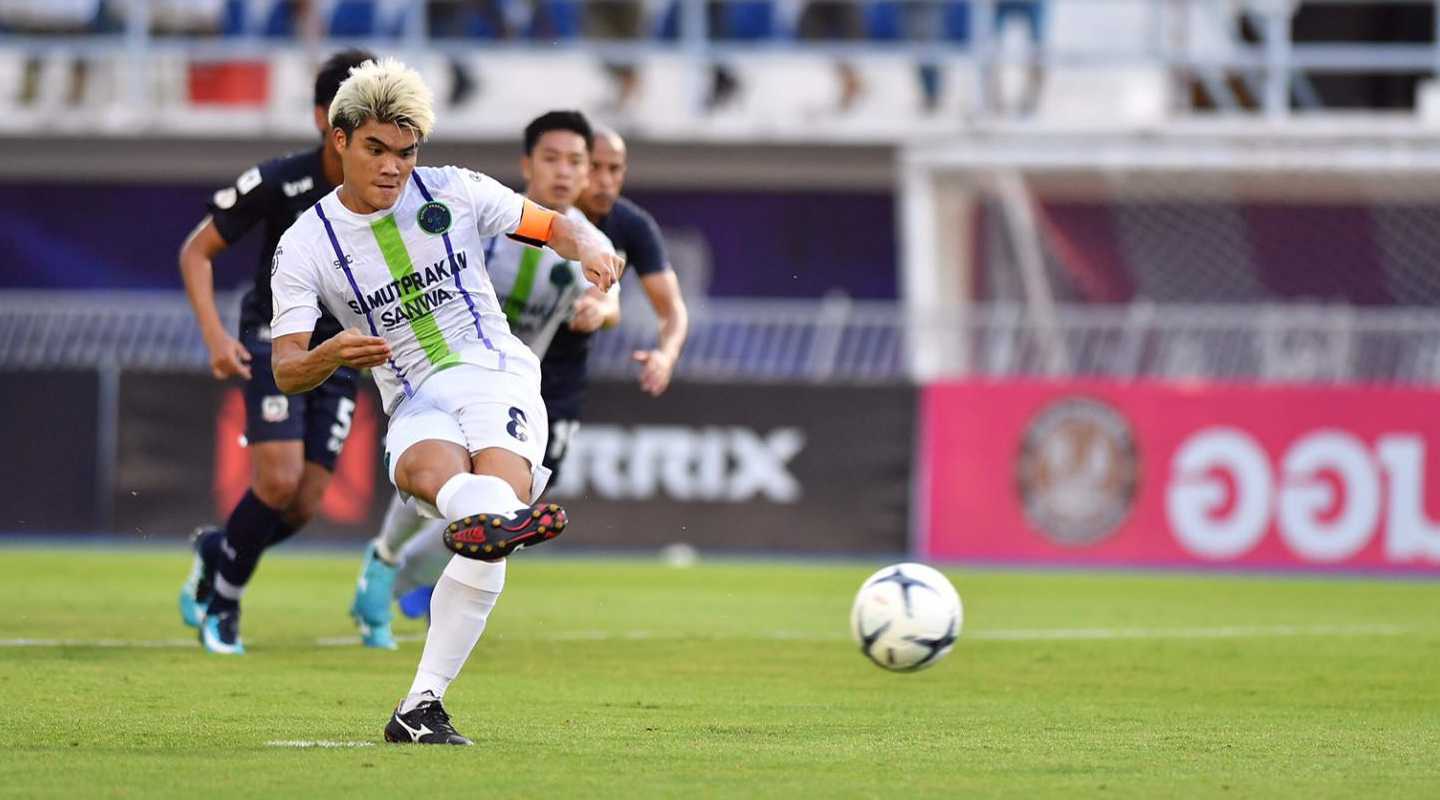 July 20th - And now the captain has gone!

I never thought I'd see the day Captain Peeradol - Mr Samut Prakan City himself- would seek out pastures new, but how wrong you can be. Thai media reports suggest that this move wasn't just about contract negotiations. Peeradol perhaps felt that a transfer to Buriram would give him a better chance of silverware and enhance his international career prospects.

With Jakkapan signing for BG Pathum yesterday, and now Peeradol gone, Samut Prakan fans are getting a rough ride at the moment. Rumours are circulating that the club is perhaps in a bit of financial difficulty but that kind of gossip is to be expected given two such high profile departures.

Samut Prakan have wasted no time in finding a replacement for defender, Jakkapan Praisuwan, who departed for BG Pathum a few days ago.  Let's roll out the red carpet for Sarayuth Sompim, who joins us from Buriram. 24-year-old Sarayuth has represented Thailand at U-23 and U-21 levels and started his club career at Bangkok United before moving to Buriram in 2018. Finding himself out of the picture at the Thunder Castle, he subsequently had loan periods at Air Force and PTT Rayong.

In today's other development - and one that comes as no surprise - the release of the season's Thai league fixtures has been postponed until further notice. With the Covid situation in Thailand worsening, it's anyone's guess when the season will finally get underway. The scheduled August 13th kick off is now just a pipe dream and even a September or October start is looking unlikely.