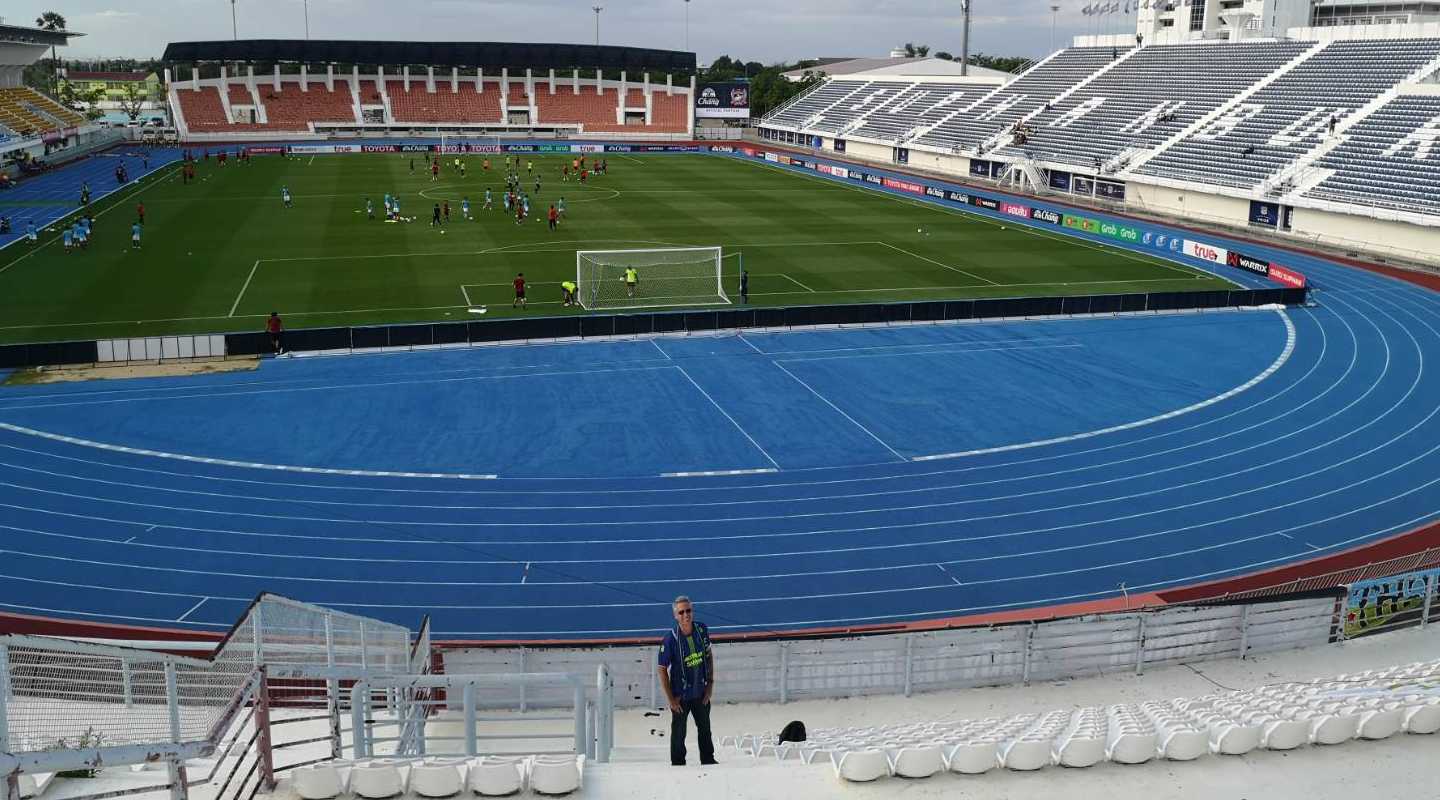 (Suphanburi folk are fiercely proud of their municipal stadium but it's not one of the Premier League's better grounds if you're an away fan. You're a long way from the action)

Are Samut Prakan relegated yet? That's the burning question!

We're not down yet! But this is how it stood before the game...

-  Samut Prakan have to win all of their remaining three games. Nothing less than three wins will do.

-  We need to catch both of the teams above us in the league (Suphanburi, who have three matches left to play, and PT Prachuap, who now have just one game remaining)

-  Apart from winning our last three matches, we need PT Prachuap to lose their final game of the season - a tough trip to Muangthong United on May 4th (the last day of the season).

-  We also need Suphanburi to lose two of their last three games, which obviously includes the game at home to Samut Prakan plus either the away trip to Bangkok United (tough) or the home game against Buriram (very tough).

Here's how the bottom of the table looks anyway

Will relegation mean the end of Samut Prakan City as a football club?

It's a horrible question I know, but there have been a number of rumours circulating this week that the owner is ready to drop the club or is 'looking for a new buyer' depending on which clickbait headline you believe. I'm not privy to insider dealings but I guess the Samut Prakan owner is first and foremost a businessman...and businessmen don't like losing money. A drop to the second tier would mean a considerable decrease in TV money, sponsorship deals, etc. Running a Thai football club can be a struggle and I doubt that Samut Prakan is very profitable even now.

One thing you don't do in Thai football is ignore the jungle drums. It seems to me they are right far more often than they get it wrong. So with a little uncertainty playing on our minds, let's enjoy this away day at Suphanburi...just in case it's the last one for a while. 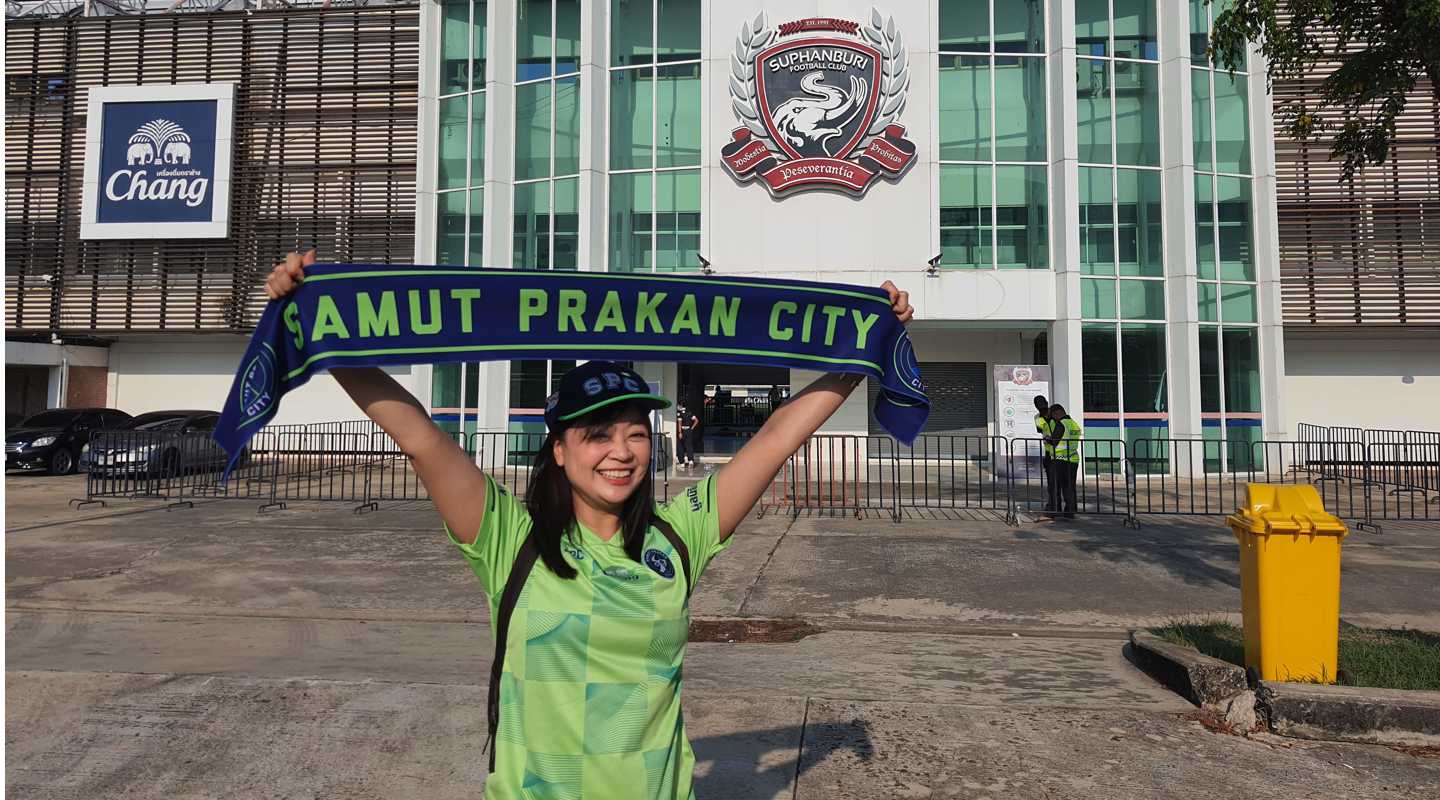 Samut Prakan have a good record at Suphanburi?

Yes, it's two wins out of two on their patch. Last season, the two teams met here on a Wednesday night in March. I did the relatively short journey alone and stayed in Suphanburi overnight. The game ended in a 2-1 win for Samut Prakan.

In our first season (2019) Tun, myself and a couple of Thai friends (both Suphanburi supporters) decided to make a day of it (a little bit of sightseeing, a nice lunch and on to the match) and Samut Prakan ran out 1-0 winners. It took a Peeradol penalty to seperate the sides but I remember it as a game Samut Prakan dominated from almost start to finish. 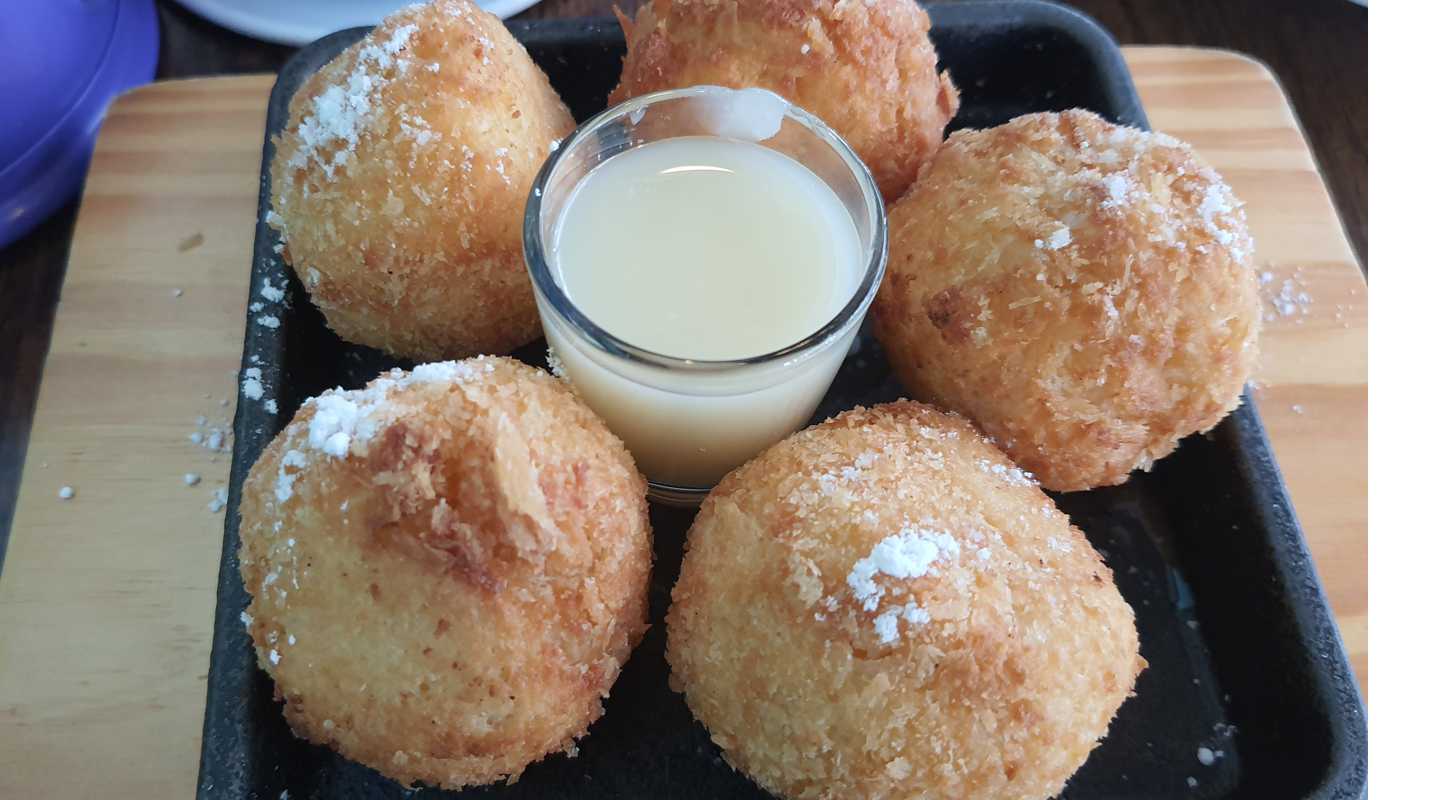 (Fried milk - one of the specialties at the We're Coffee Shop, our favourite Suphanburi lunchtime spot)

On a peaceful Sunday morning, we covered the distance to Suphanburi in well under two hours and enjoyed an early lunch at one of our favourite Suphanburi coffee shops. For accommodation, we had booked a night at the Muaan Resort and for a thousand baht (excluding breakfast) it turned out to be an excellent choice. Although the rooms themselves are nothing that special, the environment - the gardens and ornamental lakes - are an absolute joy, and you're just a five-minute drive from Suphanburi Stadium. You do need a car though. 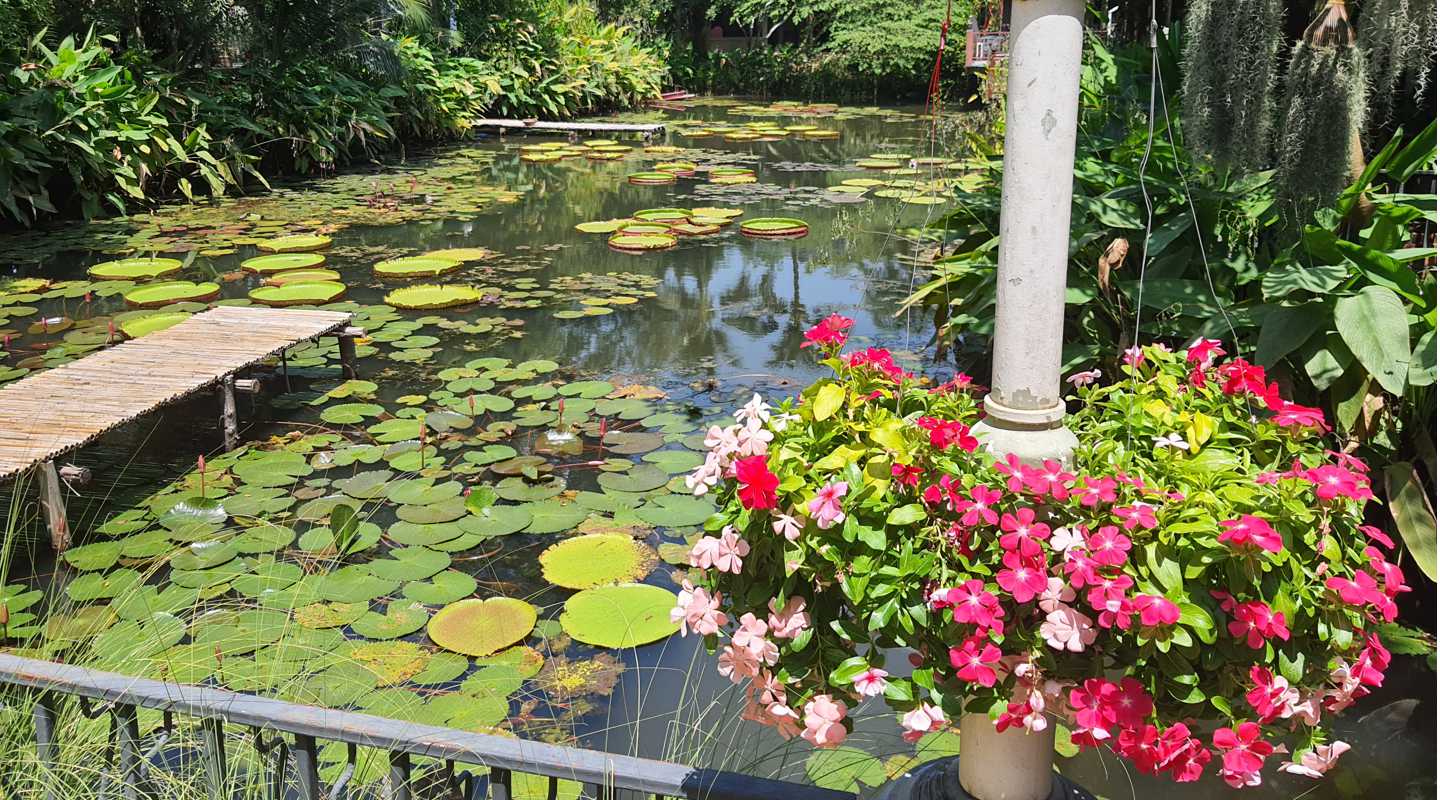 (A delightful environment awaits you at the Muaan Resort in Suphanburi)

A decent away following had made its way from Samut Prakan by organised bus and when we arrived at the stadium, the hardcore element were already in great spirits. In a further easing of Covid restrictions, the Thai FA (or whoever makes these decisions) had lifted the ban on cheering equipment so fans had assembled in the car-park with their enormous flags and drums, something they hadn't been able to do for quite some time. And I have to say, the drums and megaphones made a huge difference to the atmosphere. I'm not a fan of the view-obstructing giant flags though.

Aris Jarifovic was absent from the Samut Prakan starting line up (serving a one-match ban for reaching four yellow cards?) but there were welcome returns for Jaroensak, Noppon Ponkam and the recently out-of-favour Daisuke Sakai. And it was the Japanese midfielder who spurned the visitor's first opportunity on four minutes as he sidefoots a shot high over the bar. The home side respond well with Danilo glancing a header wide but the game has a feel of two nervy sides, frightened of leaving gaps in the defence as they try to preserve their top flight status.

The deadlock is broken just before the half hour mark and it's the Sea Fang who get their noses in front. Samuel Rosa, having one of his better games in a green shirt, feeds Chaiyawat Buran and his precision cross is met at the far post by Captain Chayawat to blast into the roof of the net. There's a suspicion of offside about it and VAR intervenes but the goal is allowed to stand.

Half-time: Suphanburi 0 Samut Prakan 1 (and we're halfway to getting the job done) 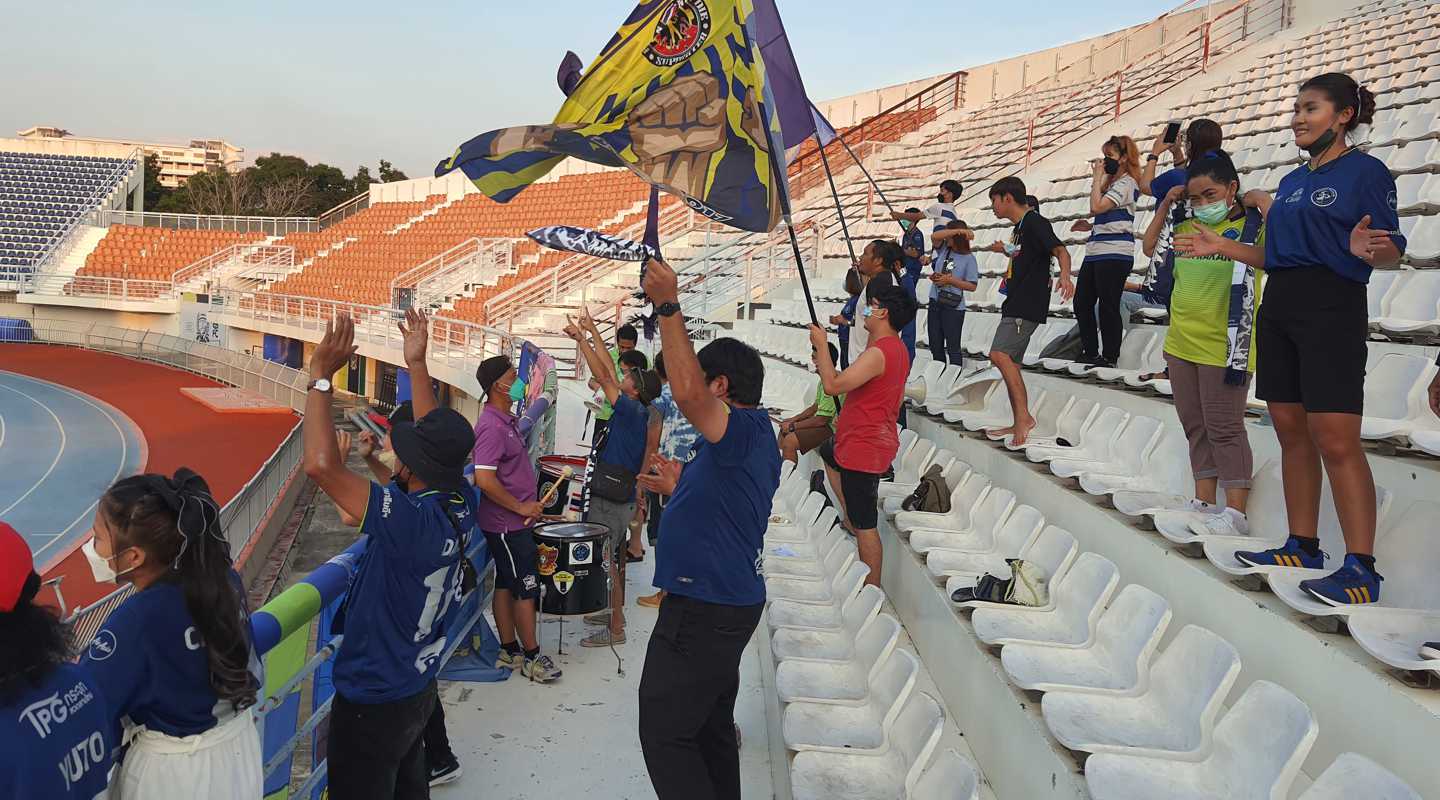 (The flags and drums were back in force)

Before I forget, the match tickets for Samut Prakan fans were 165 baht (strange number I know) making Suphanburi Stadium the cheapest place in the premier league to watch a football match as an away fan. The stewarding and security were also very friendly so a thumbs up for that as well. 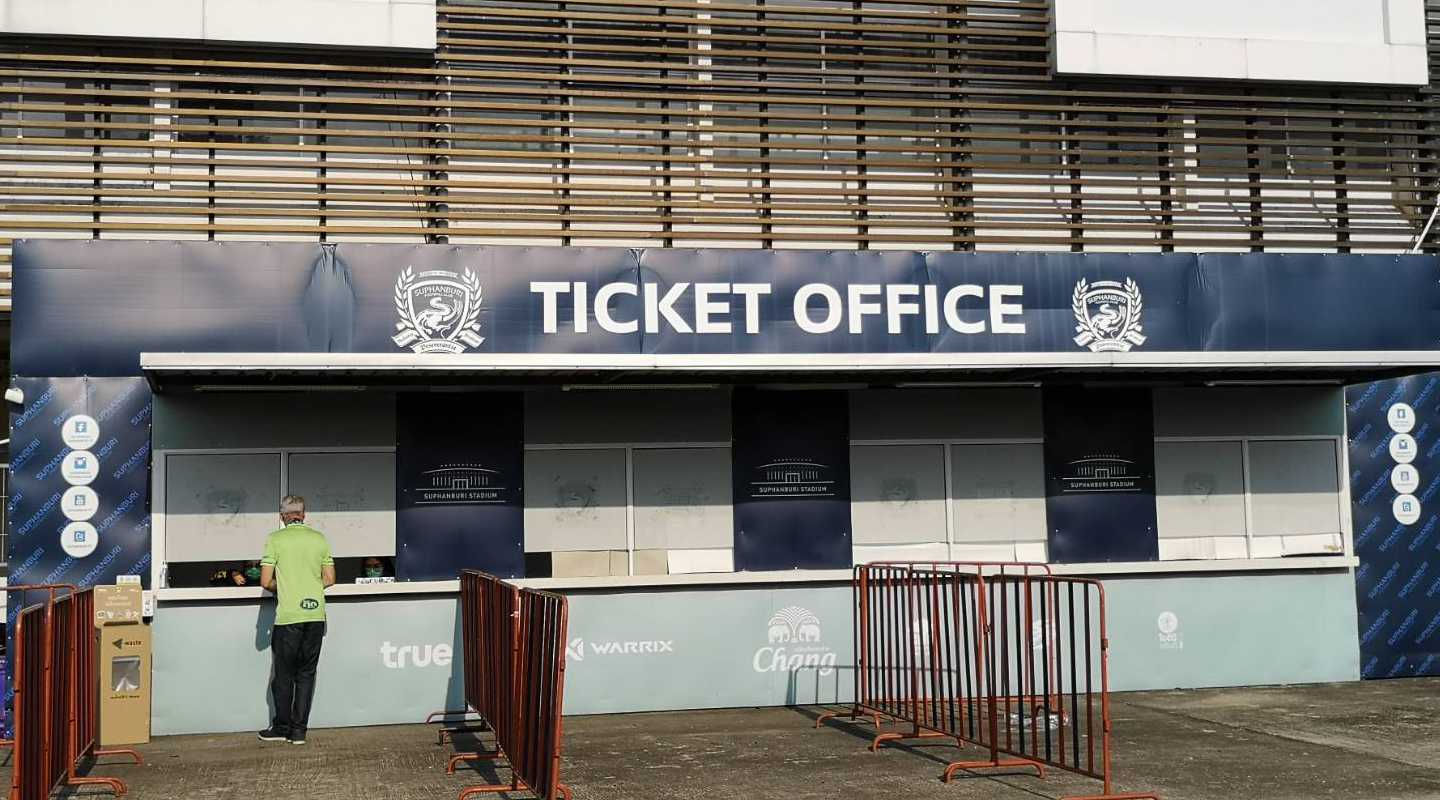 Back to the match. Second half?

They say one player doesn't make a team but I wonder if Samut Prakan would be in the same pickle if we hadn't lost Jaroensak for most of the season. With his combined trickery and sheer ability, he adds another dimension to the team's play. Great players seem to raise the players around them. Jaroensak can head a ball as well, as he proves just minutes into the second half by getting on the end of an inventive scooped cross from Rosa. Samut Prakan go two-nil up and the travelling support is in dreamland.

Samut Prakan then begin to look almost 'too comfortable' against a Suphanburi outfit desperately needing at least a couple of goals to keep their survival hopes alive, the visitors just as likely to score a third as the War Elephant clawing their way back into the game. But corner-flag-keep-ball is always a risky strategy with still ten minutes on the clock. I think it was Noppon Ponkam who loses possession in the opposition half. The ball eventually finds itself to Danilo and Suphanburi's number 99 nods in a lifeline goal. You can see from Patiwat's expression that he could've done a lot better to keep the ball out, but the Samut Prakan custodian makes amends just minutes later. diving to his left to deny Ratchanat from a free kick.

An agonising five minutes of injury time has Samut Prakan fans not-so-politely asking the referee if his stopwatch was still in working order. Eventually the final whistle blows and the fans in the Samut Prakan replica shirts celebrate as if they've won the world cup. I wouldn't begrudge them a second of it. There hasn't been an awful lot to celebrate this season. 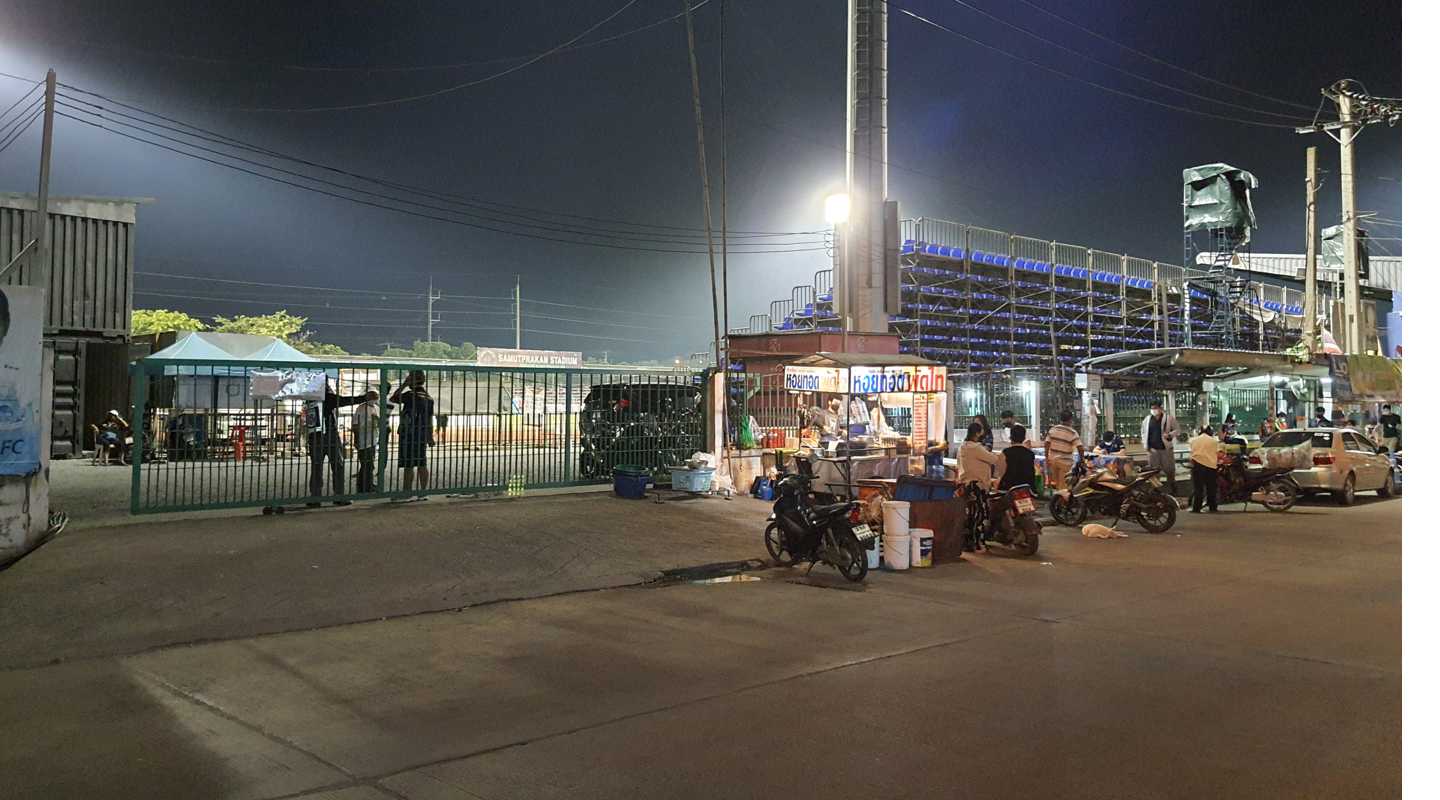 I'll hold my hands up because I never thought we'd be taking the relegation fight into gameweek 29 but that's where we're at. Yes, we still need to win our remaining couple of matches. Yes, we're still relying on Suphanburi to lose another game. Yes, we're still hoping that Muangthong can beat Prachuap on the final day....but it all just feels that little more possible.

Great win against Suphanburi. We rode our luck at times but survival is sure to be ugly. Kudos to the noisy, drum-beating, flag-waving Samut Prakan fans who made the journey. You did the team proud!

I'm going to single out a couple of players as well. Firstly, Jaroensak, great to see him in the starting eleven because he lifts the whole team. Come-what-may, I don't expect him to be here next season but he has the chance to leave us with the most precious gift of all - premier league survival. Secondly, Samuel Rosa, who finally showed what he's about. His finishing isn't the best but he saw plenty of the ball and was a constant menace up front. His assist for Samut Prakan's second goal was quality.

We are not down yet!

We have a home match against Khon Kaen on Saturday 30th April and finish the season with another home game v Chiang Rai on Wednesday 4th May.