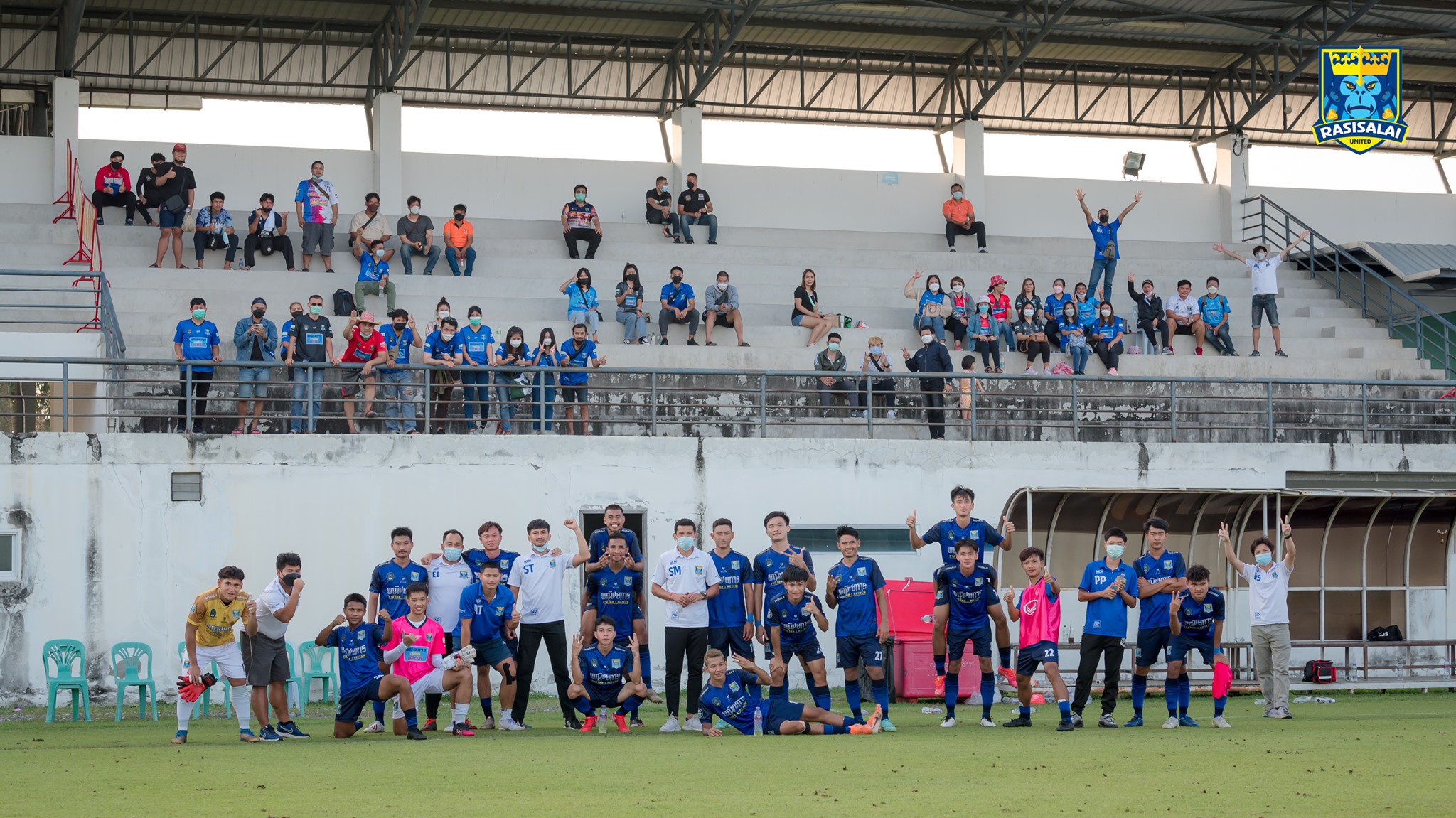 (The mighty Rasisalai United and a section of their supporters. Photo: official Facebook page)

What a cup draw!

Well, I suppose if you're looking for a comfortable passage into the next round of the FA Cup, a home tie against a Thai amateur club is about as easy as it gets.

So who are Rasisalai United?

I was dreading that question. Rasi Salai appears to be a district in Si Saket Province so these young lads will have had a bus journey of some eight hours to get to Samut Prakan for the match. I trust they would've arrived the day before the game and found a cheap hotel somewhere.

Rasisalai United (nickname - The Monkey Kings) do have an official website but I lost the will to live after a couple of clicks that just took me to blank pages. Thankfully I found an updated Facebook page, which at least gives you a feel for the club. They look to have a decent set-up with a tidy little stadium and an enthusiastic bunch of very young Thai players (mostly if not all vocational school students).

I haven't a clue what league they play in or at what level though. Could this be one of those horrible Thai FA Cup mismatches that results in Samut Prakan giving those monkeys a good spanking? Only time will tell.

What I do know is that they have beaten Kalasin (another team from north-east Thailand) and a team called PS Planet to get this far. They've deserved their crack at the big time. That is of course if Bang Plee on a Wednesday evening against what will surely be a Samut Prakan reserve team, in front of a few hundred supporters, qualifies as 'big time'. I'm not so sure.

This YouTube video goes inside the Rasisalai set-up with some highlights of their FA Cup run. 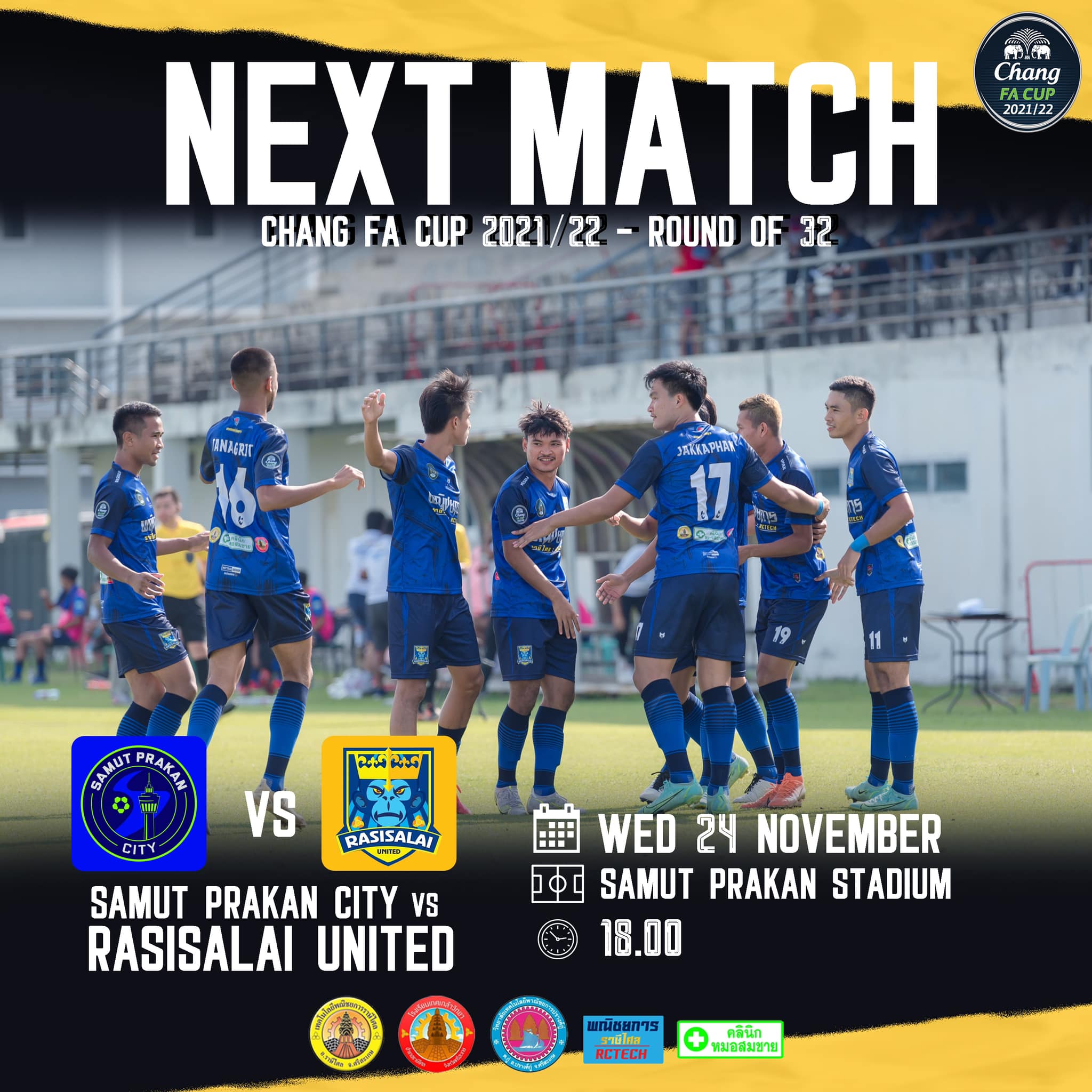 Give us a quick overview of this FA Cup round of 16 matches and 32 teams?

15 of the 16 premier league clubs have made it to this stage and there are three all-premier league clashes; Ratchaburi host Chiang Rai (the cup holders), Chiang Mai United are at home to Chonburi (last season's beaten finalists) and Police Tero will play Khon Kaen.

Third division Prime United (a Bangkok-based club) probably did best of all, coming out of the draw with a dream trip to the mighty Buriram.

Mahasarakham Sambaito FC at home to Muangthong is another tie that conjures up the magic of an FA Cup competition.

Obviously expecting a very small crowd, Samut Prakan decided to open only the two main stand sections (W2 and W3) along with the away supporters' enclosure. This meant that E stand (the most popular section on any given match day) would be completely closed off. Are we looking at an attendance of below three figures I wonder? 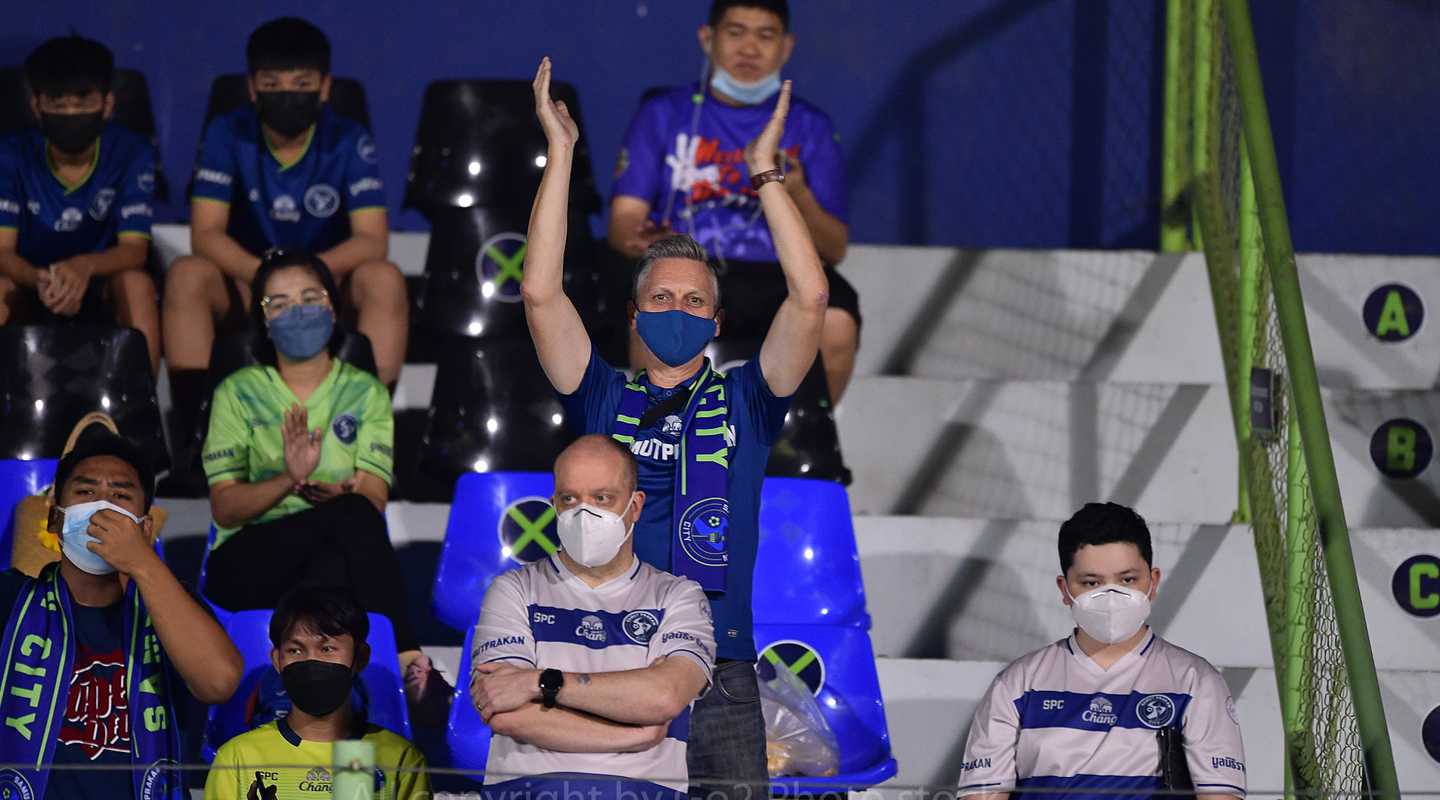 To the match itself. Team line up?

Coach Ishi selected a mix of reserve team players and regular first-teamers for this one. Familiar faces included Aris Jarivofic, Eliandro, Daisue Sakai, Srayut Sompim and goalkeeper Pathiwat (I was very surprised he didn't give the second choice keeper a chance to dirty his gloves). There were full Samut Prakan debuts for three midfield players - Chitiwat, Suwicha and Apinut.

A crowd of 235 (far better than I expected) greeted the two teams on a pleasant, coolish evening. The first thing that struck me was how strong and powerful the opposition players looked. Rasisalai may have been a bunch of university students - but they were most certainly men!

Samut Prakan got the perfect start and went ahead within two minutes, a low left-wing cross flashed across the box, only to be turned into the net by a Rasisalai defender for an unfortunate OG. The floodgates had opened. Now the home fans could sit back and enjoy a veritable goal-fest. Except it didn't pan out that way. It didn't pan out that way at all because these young lads could play. Finding plenty of joy down the left wing especially, they created more chances than Samut Prakan in the first period; all they lacked was a goalscorer. Samut Prakan meanwhile, looked bereft of a real game plan and far too many passes went astray. This certainly wasn't going to be the stroll we'd envisaged.

This particular FA Cup tie wasn't shown on TV so I don't have the benefits of the highlight reel to look back on. The second period brought about a marginally better performance from the home team but the university boys again had their moments. We had to wait until very late in the game to seal the victory, Srayut Somphim curling a delightful shot into the top corner. Now the home fans could breathe easy. 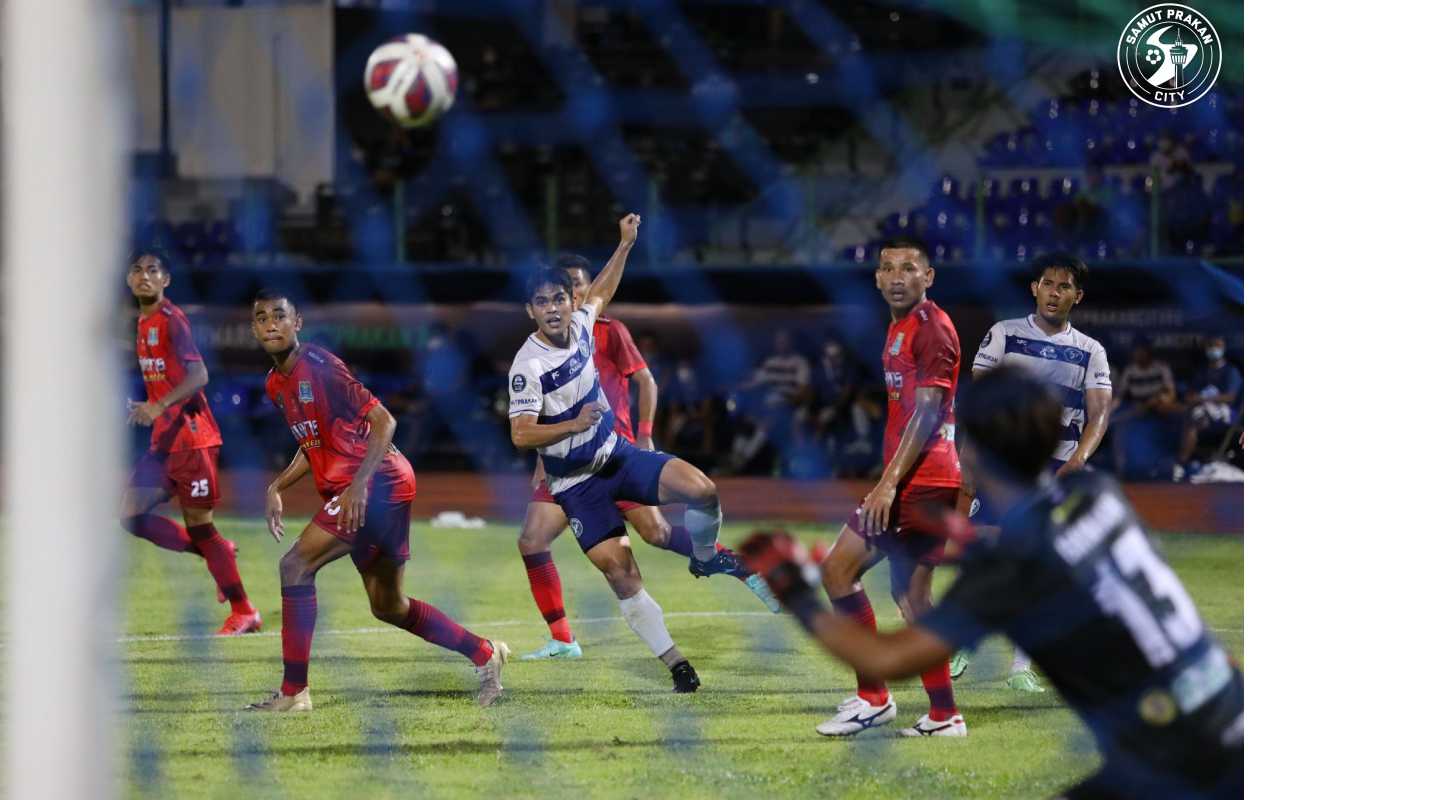 Wow! that was hard work. Yes, it was another below-par performance from Samut Prakan but let's not take anything away from Rasisali United because they were superb. I'm not sure how many of their supporters made the long journey - a couple of dozen perhaps? - but the team did them proud. If Rasisalai had had a goalscorer, you could well have been reading about one of the biggest FA Cup shocks of all time. Maximum respect and all the best for the rest of the season! 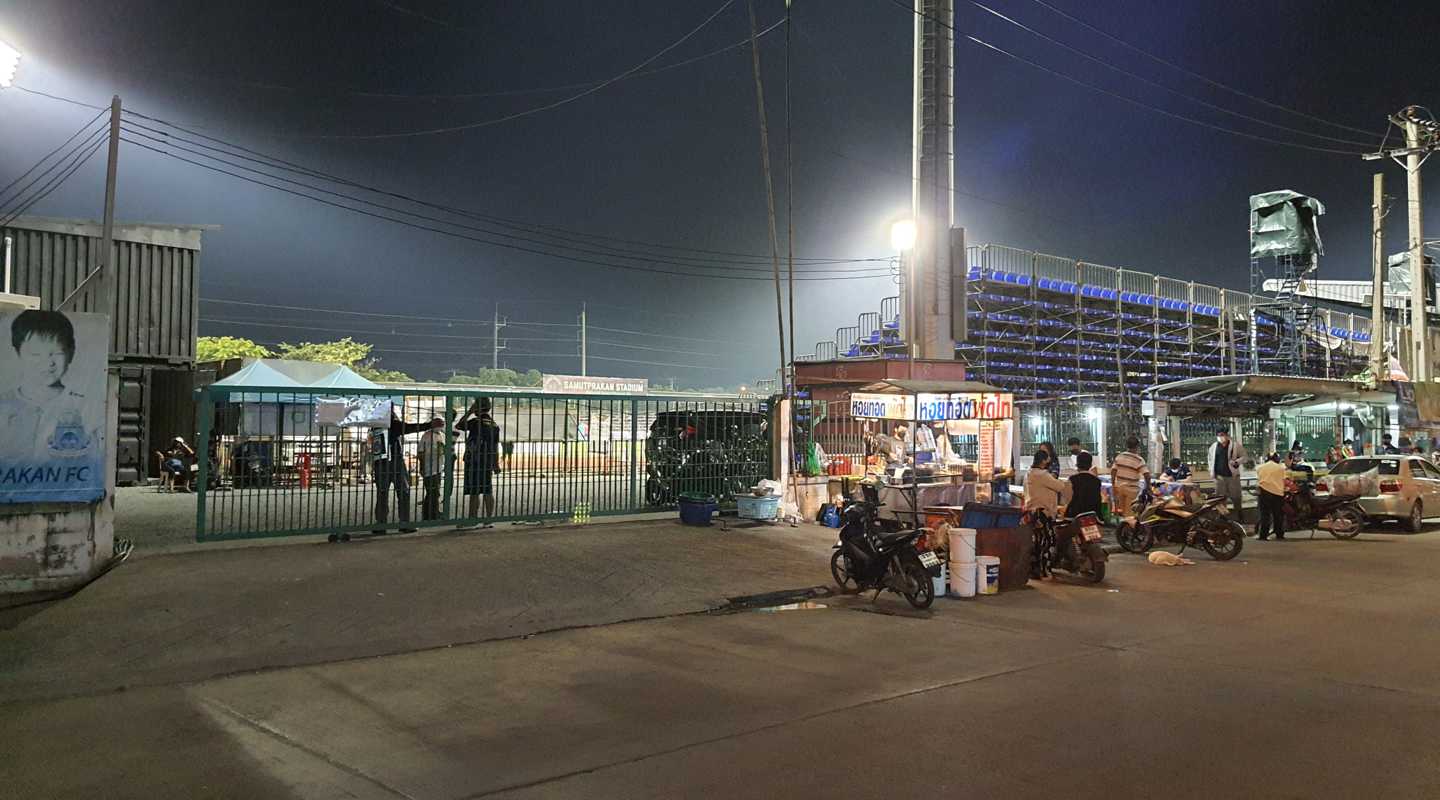 (This was definitely Rasisalai United's night)

Who's through to the FA Cup round of 16?

That means there are just four teams joining them from outside the top flight - Lampang and Lamphun Warrior, both currently doing well in the second division, Uthai Thani, currently top of the T3 North, and Songkhla FC from the T3 South division.

Back to league action and a long trip north on Saturday to Khon Kaen for the final game before the month-long international break.

Yes, I'm looking forward to experiencing a new city and a new stadium. Flights and hotel are booked and the wife is coming with me so we'll make a football weekend of it!