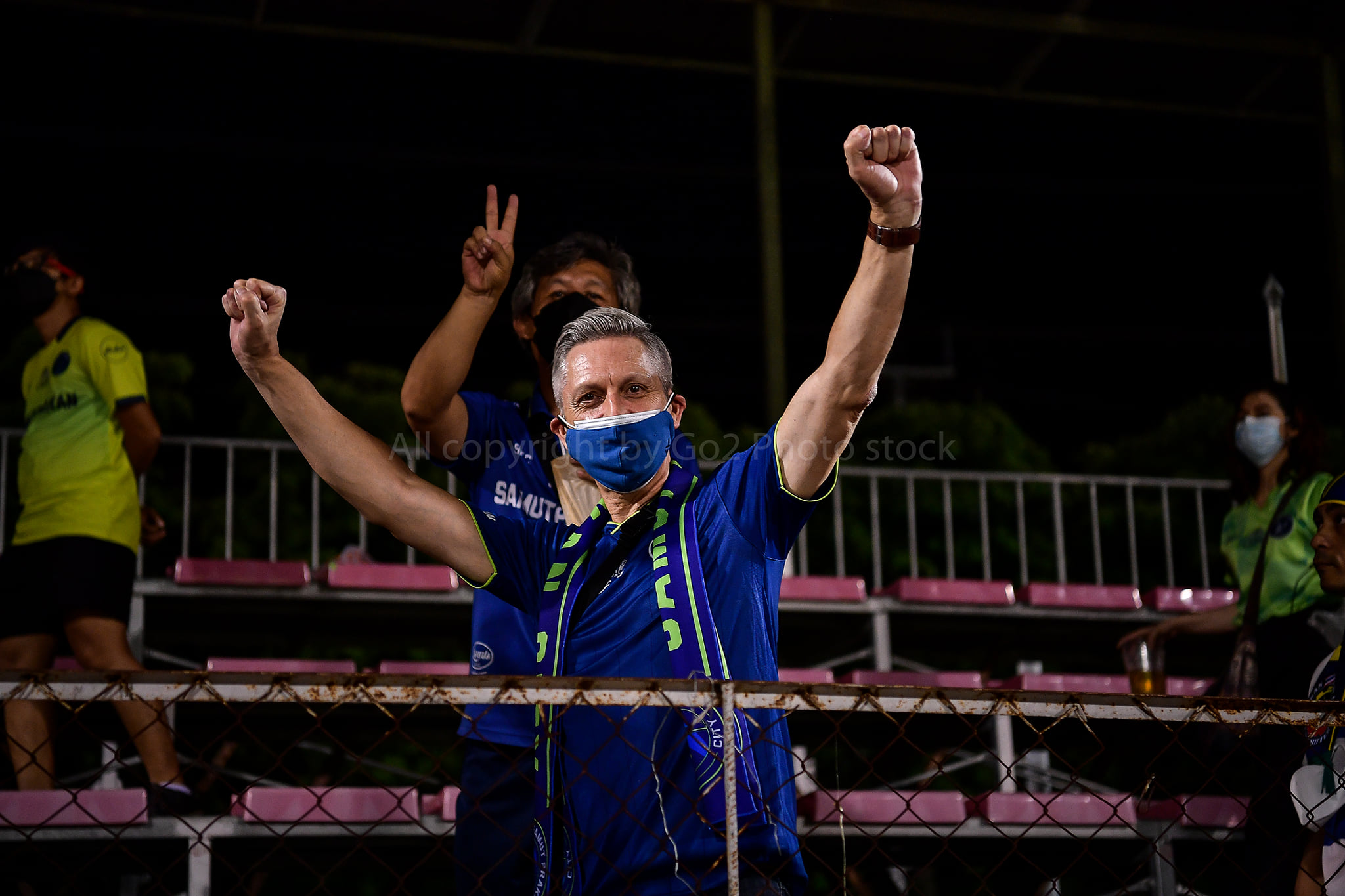 So it's Port FC at home and always an eagerly awaited game?

Yes, it's always one of the first fixtures I look out for but such a shame that we're operating with very limited capacities at the moment. With Port being such a well-supported club and their fans having only a short distance to travel, you can pretty much guarantee a 5,000 sell out under normal circumstances. In fact, I'll go as far as to say that the first time we played them at home - in the 2019 season - it was the best atmosphere I've experienced down at Bang Plee.

What's the head-to-head record like between the two clubs?

Samut Prakan City and Port FC have met four times in the Thai Premier League and although we've only taken one point off them in two trips to their PAT Stadium, oh boy, do we love playing them at home!

In 2019, we beat them 2-1 in a fantastic match that had everything (missed penalty drama and all sorts). Last season, the fixture was played behind closed doors but we turned in arguably our best performance of the campaign, an absolute Christmas cracker, with the Sea Fang running out 6-3 winners.

How are Port doing this season?

They are currently in 5th position, two league places above Samut Prakan and two points better off. But for a club who feels its long overdue a first title, trailing leaders Buriram by five points is what matters most to them at this stage. Port played at home to Buriram in last weekend's big 'six-pointer' and will be eager to put a disappointing 2-0 reverse behind them.

In their three games on the road, Port have beaten Chiang Mai, drawn with Bangkok United and suffered a surprise 2-1 defeat at Suphanburi. 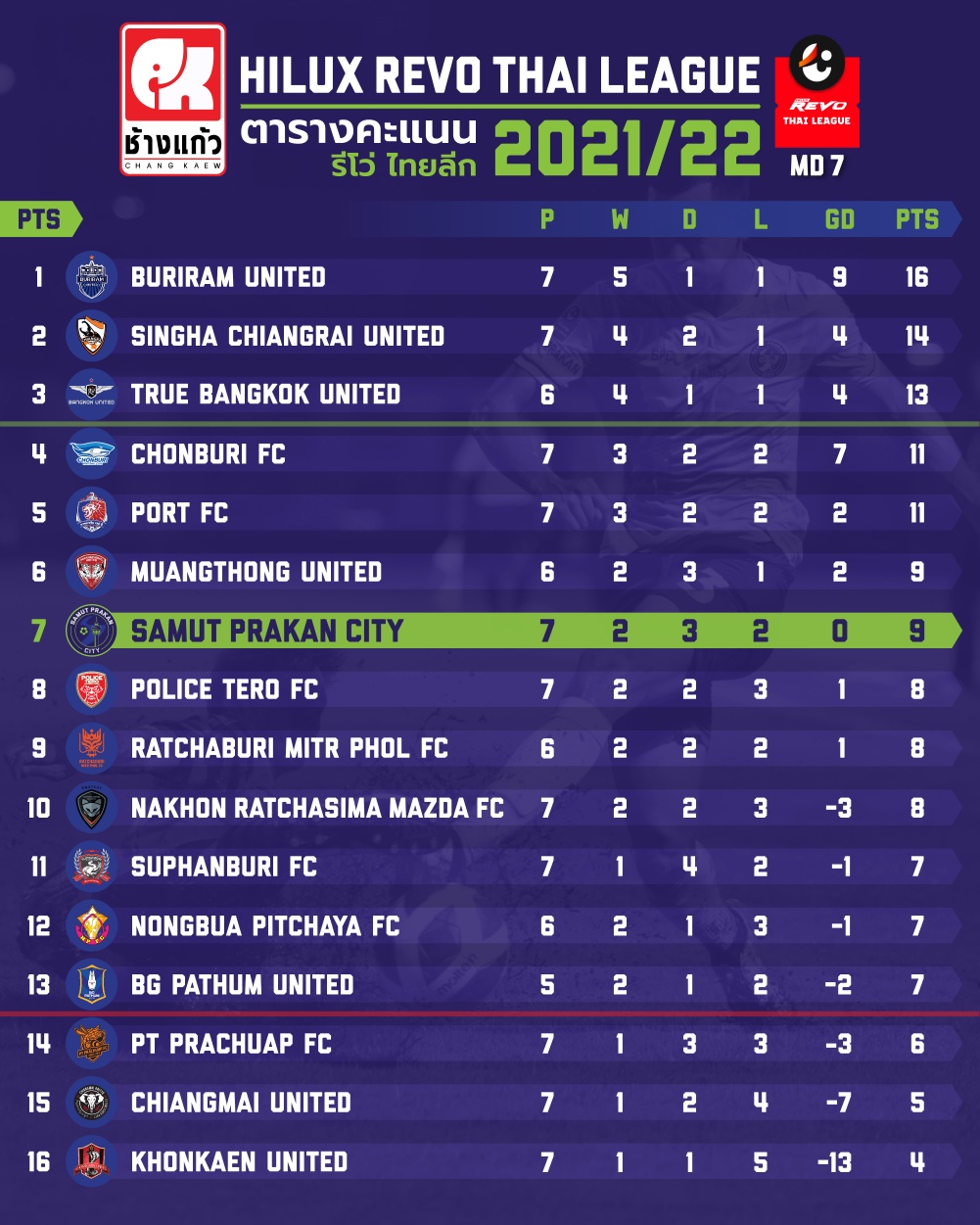 Let's ask James Clarke, who runs Port's excellent English language website The Sandpit, what he's made of his team's season so far?

Going into the match with Buriram, I said in our preview that a win and potentially moving top of the table would be an excellent start to the season - but a defeat would leave us about where we expected to be.  And so it proved. Defeat leaves Port 5th with an opening part of the season that looks as predictably unpredictable as has become the Port norm.

There was a sense we were building up a bit of momentum only for Buriram to send us crashing to the ground (nothing new there sadly). Throw in unheralded opposing strikers deciding that this was the one day of the year they couldn’t miss from 25 yards, our most loathed ex-player missing a penalty to deny his side three points, some VAR randomness, a win in the Bangkok derby and it’s a typically mixed bag.

And it’s not going to get any easier to predict as we’ll be heading out of Bangkok to visit you in a pretty banged up state, without our main creative threat Sergio Suarez, who was sent off against Buriram for a pointless slap and is now suspended for the next two games. In addition, Nelson Bonilla, who had looked back to being the most feared finisher in the league with 5 goals in 6 games, only made it to half-time before what appeared to be groin strain ended his evening, so l doubt he’ll play any part either.

Add in central defenders who have pretty much rotated themselves though injury (only once has the back line been unchanged thus far this season) whilst in central midfield, Karrarin and Siwakorn were unavailable last time out.

Thanks Jim. Any player connections between the two clubs? 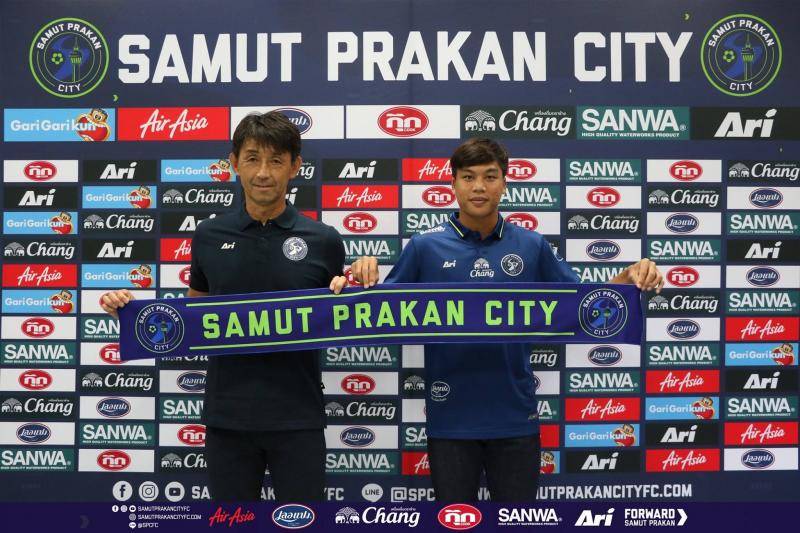 Port's owners have never been afraid to splash the cash and have tried 'poaching' one or two of our big name players on past occasions. I suppose it all adds to the rivalry - even though Port fans don't consider us rivals in any shape, size or form. We're not even that noisy lot from down the road!

Are fans allowed in for this game?

I believe it will be up to 25% of the capacity. The rules are all over the place at the moment. Buriram have been told they can increase the number of fans for home matches from 25% to 50% while the likes of Bangkok United and BG Pathum are still playing behind closed doors. It's all beginning to make very little sense.

Anyway, good to see Samut Prakan moving ticket sales to the far-easier-to-handle Ticket Melon website rather than making fans fanny around with that dreadful LINE app.

We always seem to raise our game against the Lions so I feel duty bound to go for a home win. Let's be brave and and tip Samut Prakan to win 2-1. 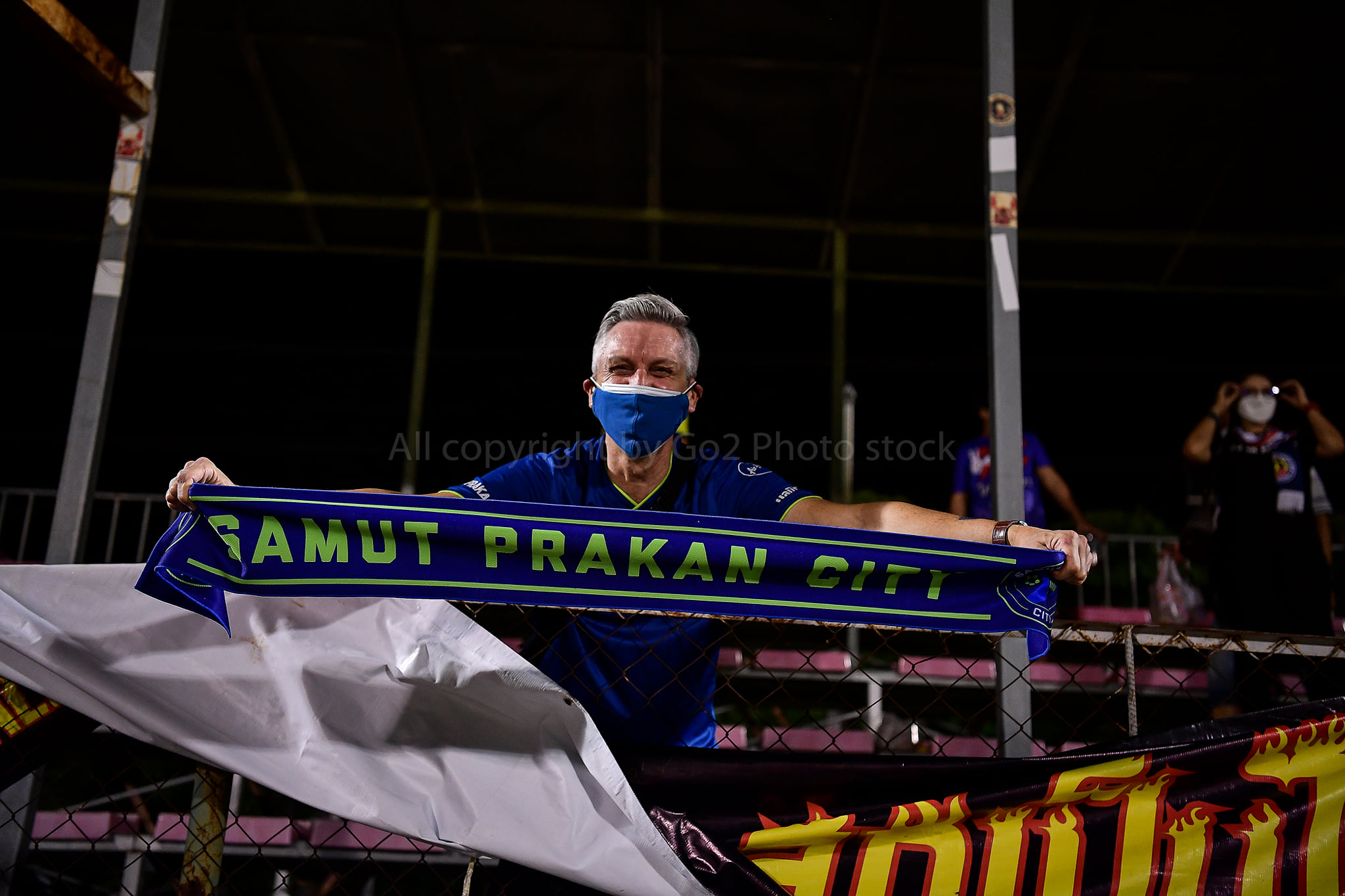 To the match itself. Team news?

Port were without star striker Sergio Suarez, who was sent off against Buriram last weekend for playfully slapping an opponent's face.

Samut Prakan were without defender Srayut Sompim, who received a nasty kick to the face in the 1-1 draw at PT Prachuap, which meant Saksit Jitvijan was drafted in for his first start of the season. Noppon Phonkam returned to the starting eleven in place of Phouttasay Khochalern.

The game got underway in a low-key, subdued atmosphere, always a characteristic of early evening kick offs at the SAT Stadium.

Samut Prakan started brightly, as they've done in all their recent matches without going on to get the right result, and grabbed the lead on 18 minutes. Yuto Ono plays the short corner routine and whips in a delightful centre for Jarifovic to ghost in and apply the finishing header. Port keeper Worawut's diving attempt to keep the score goalless is all in vain as VAR confirms the ball crossed the line. Samut Prakan's giant Slovenian centre half, playing probably the best football of his three-year spell in Thailand, punches the air in delight while managing to carry Eliandro on his back at the same time. No mean feat at all!

It took a while for Port fans to sell out their allocation of around 125 tickets, understandable in these testing times when watching the game in a pub or at home on TV is undoubtedly an attractive option, and those travelling supporters who did make the journey would have been seriously underwhelmed by Port's first half showing. Possibly the biggest cheer from the away end was reserved for a stray dog that wandered on to the pitch for a gentle stroll down the left wing.

Back to the action and Samut Prakan captain Chayawat pulls the trigger from distance almost making it 2-0 midway through the half but Worawut pulls off a worldy to keep his side in the contest.

Port's best chance of the first period comes five minutes from the break as a freakish free kick - Pakorn completely slipping over as he makes contact with the ball - results in Patiwat in the Samut Prakan goal having to make a fingertip save.

Half time: Samut Prakan 1 Port FC 0.  So far Port just hadn't turned up and frankly looked lethargic and pedestrian. Unfair perhaps to single anyone out but star players like Philip Roller (who I admire so much) were just getting bullied by an aggressive Samut Prakan team winning individual battles all over the park. 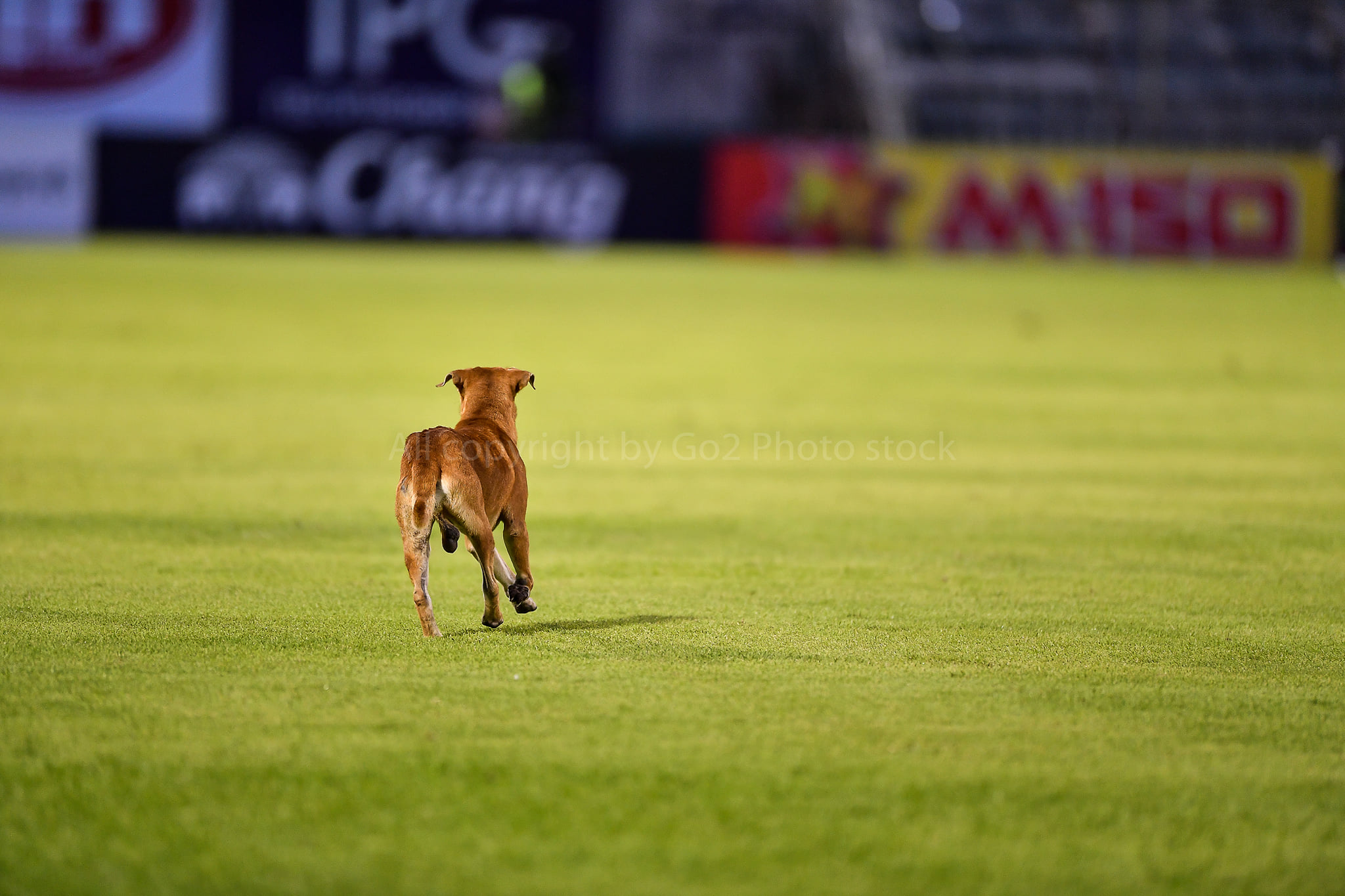 Football matches are so much more enjoyable played under lights and so it proved as darkness fell, along with some light rain, as both sets of supporters ramped up the noise level and those in uncovered areas hurried to extract waterproofs from backpacks. Fair play to a disappointing crowd of just 648 who did their utmost to create a decent atmosphere.

Port's Bordin Phala finds space in the box just minutes into the second half but hits the side-netting. At the other end, it's Worawut to the rescue again as he denies Chayawat for the second time with another super save. If that save was good, Pathiwat's diving fingertip block to keep out a Javier Patino header just moments later was even better. This contest was becoming an end-to-end humdinger.

The visitors get back on level terms in the 60th minute and there's more than a touch of good fortune about it. Port defender Jaturapat wins a dubious corner (the ball hit him last; just ask Jarifovic) and the Samut Prakan defence are caught napping as a relatively harmless delivery creeps low through a crowd of bodies and ends up in the net via Bordin Phala's knee. A disappointingly soft goal to concede.

Both sides go at it full pelt in search of what could be a match winner. David Rochela rattles the crossbar for Port with a deft header and team-mate Pakorn's low shot is tipped wide. For the home side, Daisue Sakai goes close with an audacious chip and Jaroensak forces Worawut into yet another good save with a rasping drive.

With a quarter hour remaining, Port take the lead and it's another soft goal to concede from Samut Prakan's point of view. A Port corner does the damage once more as Pathiwat comes for the ball, misses it completely, and Port's Korean midfielder Go Seoul-Ki is Johnny on the spot, nodding in at close range after his initial shot has rebounded off both defender and woodwork.

This exhilarating contest is not done and dusted yet though and Samut Prakan equalise in the 80th minute, Daisue Sakai cutting inside and centering to Captain Chayawat who makes no mistake with a header.

As we move into injury time, is there to be any late drama? You bet. Daisue Sakai is brought down by Philip Roller in the Port penalty area but after an agonisingly long VAR check, the ref decides it's not a foul and there would be no last gasp dramatic spot-kick. Cries of 'cheat! cheat!' ring out around me in the hardcore home section. I don't join in. I'll reserve judgment for later.

Having watched the replay several times on TV in the comfort of home, I have to agree with the referee. There was minimal if any contact at all, and Daisue went down far too easily. 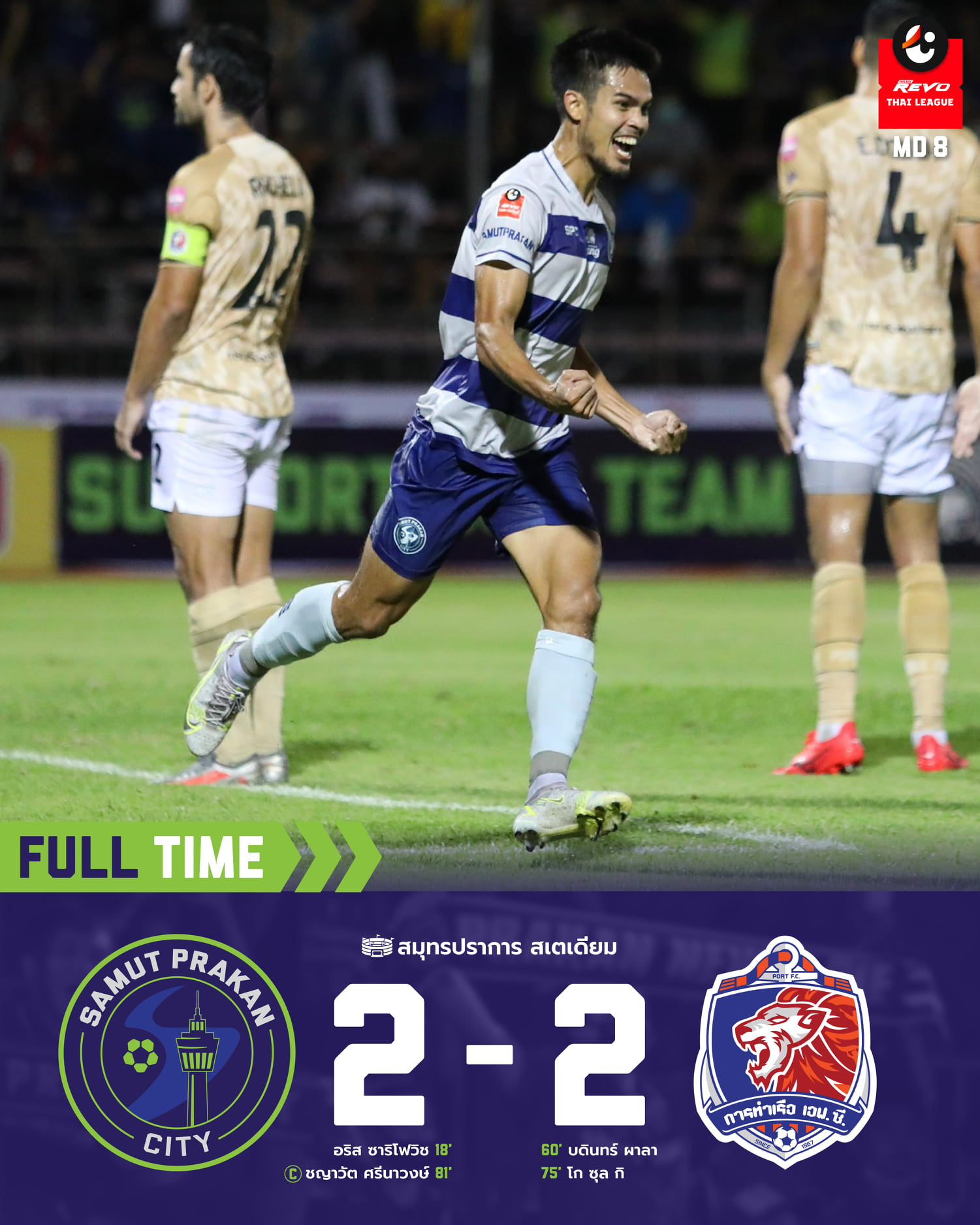 They are always good contests between Samut Prakan and Port at Bang Plee and this one was no exception. And kudos to both sets of supporters for creating a decent atmosphere in an 85% empty stadium on a damp and rainy evening. I've no complaints about the final scoreline; a draw and a point apiece was a fair outcome. And it certainly wasn't a penalty shout in the dying minutes although I'm sure a number of Samut Prakan fans would disagree.

Samut Prakan are now without a win in their last five outings but we are playing well and we've not had the best of luck in key moments. I'm certainly not downhearted; those wins will come.

We travel to flood-ravaged Nakhon Ratchisima on Saturday 23rd October for a 5.30 pm kick off. Don't forget your wellies!

Another good read, thanks Phil. You're slowly getting me interested in Thai football.