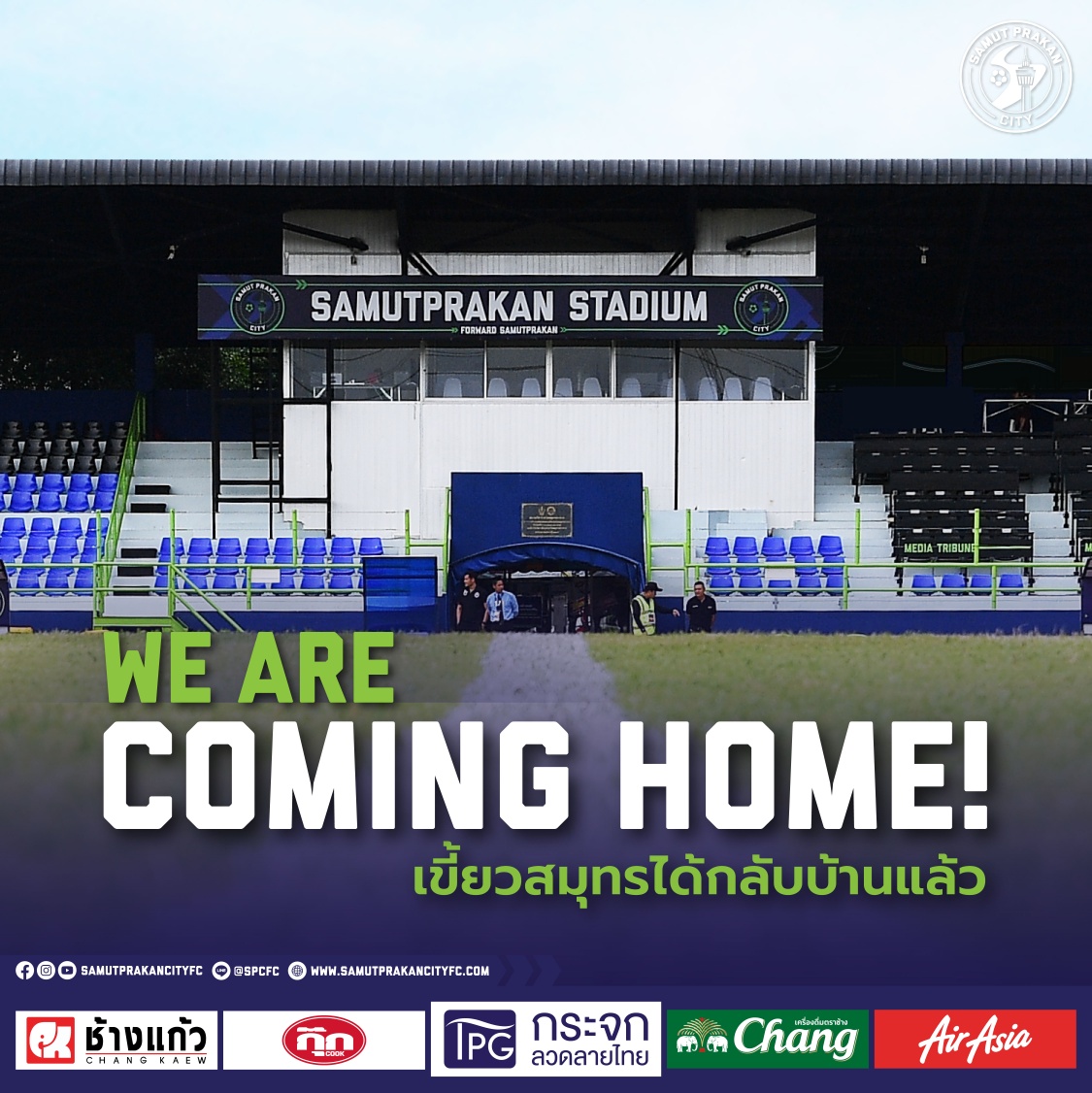 Our first home match of the season v Bangkok United. Samut Prakan have a poor record against these guys?

Yes, they are something of a bogey team. As Samut Prakan City, we've played Bangkok United four times and have just a solitary point to show for our efforts - a 1-1 draw in September 2019 (the first time the clubs met). Since then, there have been three straight defeats. It's always a tough game against Bangkok United.

In the corresponding fixture last season, Bangkok United ran out 2-1 winners but I remember a very even game that could've gone either way.

Tonight's match was originally scheduled to be played at a neutral ground some 200+ miles away in Chainat, but due to the 'improving' Covid situation, all Thai League fixtures have now been switched back to the normal home and away program.

How have Bangkok United started the season?

Like Samut Prakan, they have four points on the board at this early stage. They began with a 2-1 win at newly promoted Chiang Mai United on the opening weekend, and followed that with a 1-1 home draw against Port FC.

Top of the pile is undoubtedly 32-year-old Brazilian striker, Heberty Fernandes. To quote directly from the Thai League Central website - "One of the league’s greatest players of all time, Heberty amassed 124 goals from 183 games playing for Ratchaburi FC and Muangthong United between 2014 and 2020. He joined Bangkok United midway through last season after a short spell at Port FC"

Another key player is Thai midfielder, Thitipan Puangchan, who made a surprise move from BG Pathum after captaining them to the league title last season. Thitipan has initially joined Bangkok United on a loan deal until the end of this year but will probably extend beyond that.

Presumably this is a closed doors game?

Correct. Although the Covid situation is improving slightly with regard to the decreasing number of infections, Samut Prakan is still classified as a dark red zone, and while it's a dark red zone, even the notion of allowing 25% of the capacity is a non-starter. Let's keep our fingers crossed for October, but I have a gut feeling the loyal home fans will have to wait even longer than that.

As has become tradition at these closed door games, a group of around 30 hardcore Samut Prakan fans will gather at the edge of the canal behind the main stand, to sing, beat drums and cheer on the team. I admire their enthusiasm, but if I can't get into the ground, I prefer to watch the game at home so I can give it my undivided attention. It would be nice to see some of these friends again though. 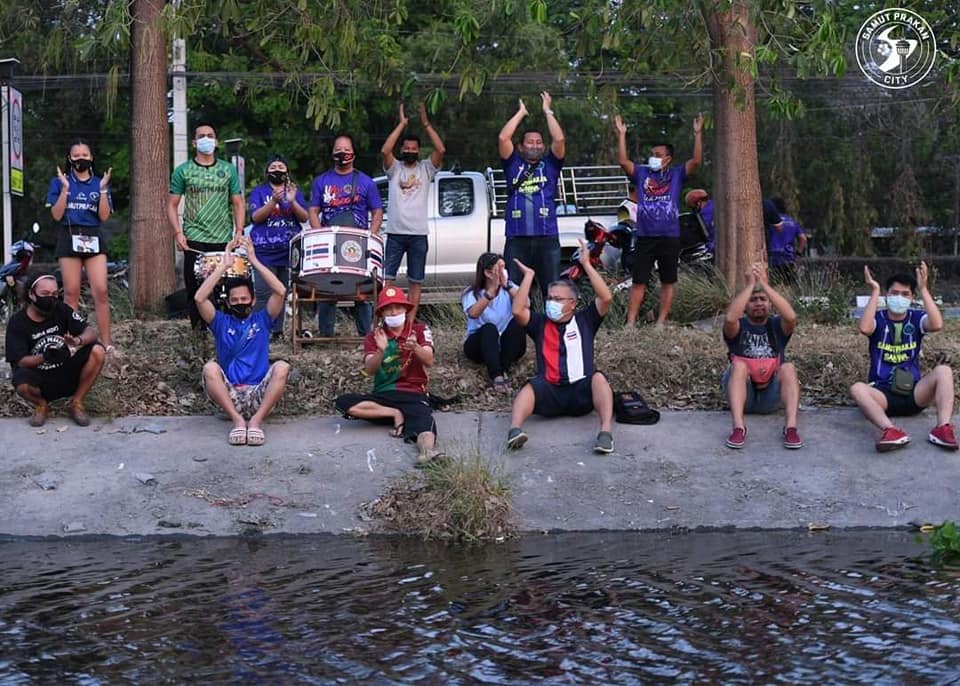 Captain Chayawat Srinawong is out injured so 23-year-old Phatsaphon Choedwichit, a June signing from third division Watbot City, makes his debut. Good to see that the other Chaiyawat, Chaiyawat Buran - so impressive in our first two games - is fit to play.  The captain's armband goes to Jaroensak.

Well, you'll never get me predicting wins against The Bangkok Angels, even with home advantage. I would be delighted with a draw this evening so let's go for an optimistic 1-1.

Let's get to the match itself. First half?

Bangkok United danger man Heberty versus Samut Prakan's defensive rottweiler, Chaiyawat Buran, promised to be an intriguing contest, which resulted in a couple of free kicks to the visitors in the opening five minutes.

Things started to look ominous as one of the strongest and most physical outfits in the Thai premier took complete control of the game, outmuscling and closing down the Samut Prakan midfield at every opportunity. The home side just couldn't find any degree of composure and passes constantly went astray. It was only the lack of quality delivery into the box that prevented Bangkok United taking a deserved lead. This had all the makings of a long evening.

But football games can change in a moment. Not quite half an hour into the contest and Bangkok United midfielder Thossawat is shown a yellow card for a shocking lunge on Jaroensak, which leaves the Samut Prakan wing wizard writhing on the deck, clutching his inner thigh. The men upstairs in the VAR room decide the ref needs to take a closer look at that one - and predictably, yellow becomes red. Few if any of the Bangkok United players contest the decision.

Samut Prakan had been thrown half a lifeline if they could just make the numerical advantage count.

As the first period draws to a close, Samut Prakan's Suphanan Bureerat goes into the ref's notebook, more from over-exhuberance at finding himself in the opposing half than anything else. It had been a game of few chances for the men in blue and white, in fact Aris Zarifovic's wayward shot in stoppage time is virtually the home side's only goal attempt in a half where they had been distinctly second best.

No Samut Prakan fan could've dreamt up the first ten minutes given what had gone before. Jaroensak finds himself in space on the right wing, a darting run and a pinpoint pass across the box and there's Daisue Sakai to sidefoot home his first goal for the club. The boy looks delighted!

Even a booking for Chaiyawat Buran - which had been on the cards since the kick off - doesn't take the gloss off things as Samut Prakan's 'Mr Assist' does it again. Another sublime bit of Jaroensak wing play, ends with a perfectly weighted pull back to Eliandro and the big Brazilian opens his account for his new club with a cool finish. Samut Prakan 2 an utterly shell-shocked Bangkok United 0.

Heberty finally gets into the game (it really hasn't been his night) and blasts a chance wide, but these are isolated moments. Samut Prakan are dominating. They're the ones scrapping for every ball, outmuscling their opponents and stroking the ball around on the usual pristine SAT Stadium playing surface. Eliandro looks a new man. Chest puffed out, he's full of confidence and making intelligent runs. It's amazing what a goal can do for a player.

Eliandro turns provider for Samut Prakan's third, setting up Jaroensak to cap a fine counter-attack and add a goal to his two assists on the night. A fine evening's work that will only enhance his reputation even further.

Bangkok United score a neat headed consolation goal with just ten minutes remaining, but Aris Jarifovic and his well-marshalled troops make sure that's all they go home with. Samut Prakan Manager Ishii has even had the luxury of sending on five late substitutes to give some of the 'kids' a run out.

Someone pinch me. We've just beaten Bangkok United for the first time and we sit proudly at the top of the league. Not bad for a club that supposedly let all its star players go, eh?

Seriously though, many a Bangkok United fan would say that the red card was a game changer, and I wouldn't argue with that. But that second half performance was something else. Whether you're a Samut Prakan fan or just a neutral observer, this team continues to amaze - and the manager's stock is rising with every game. He's instilled an incredible never-say-die attitude into this side. Can we continue punching above our weight? Hell, I don't even know if we are punching above our weight after what I saw tonight. 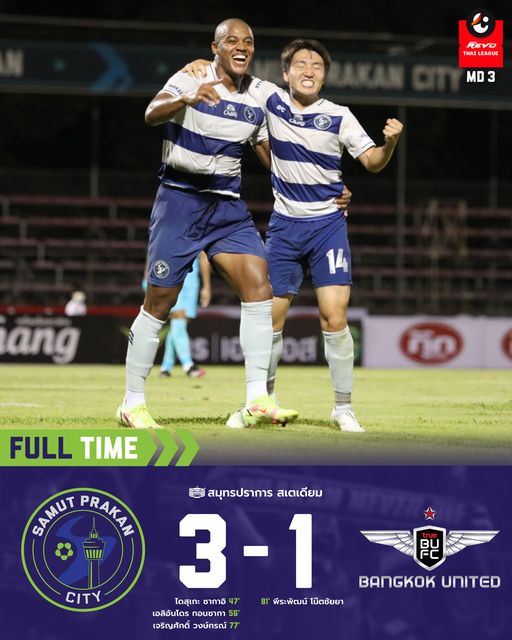 We have a nice 8-day break now before we travel the short distance to Police Tero on Sunday 26th September. Kick off 6.00 pm.