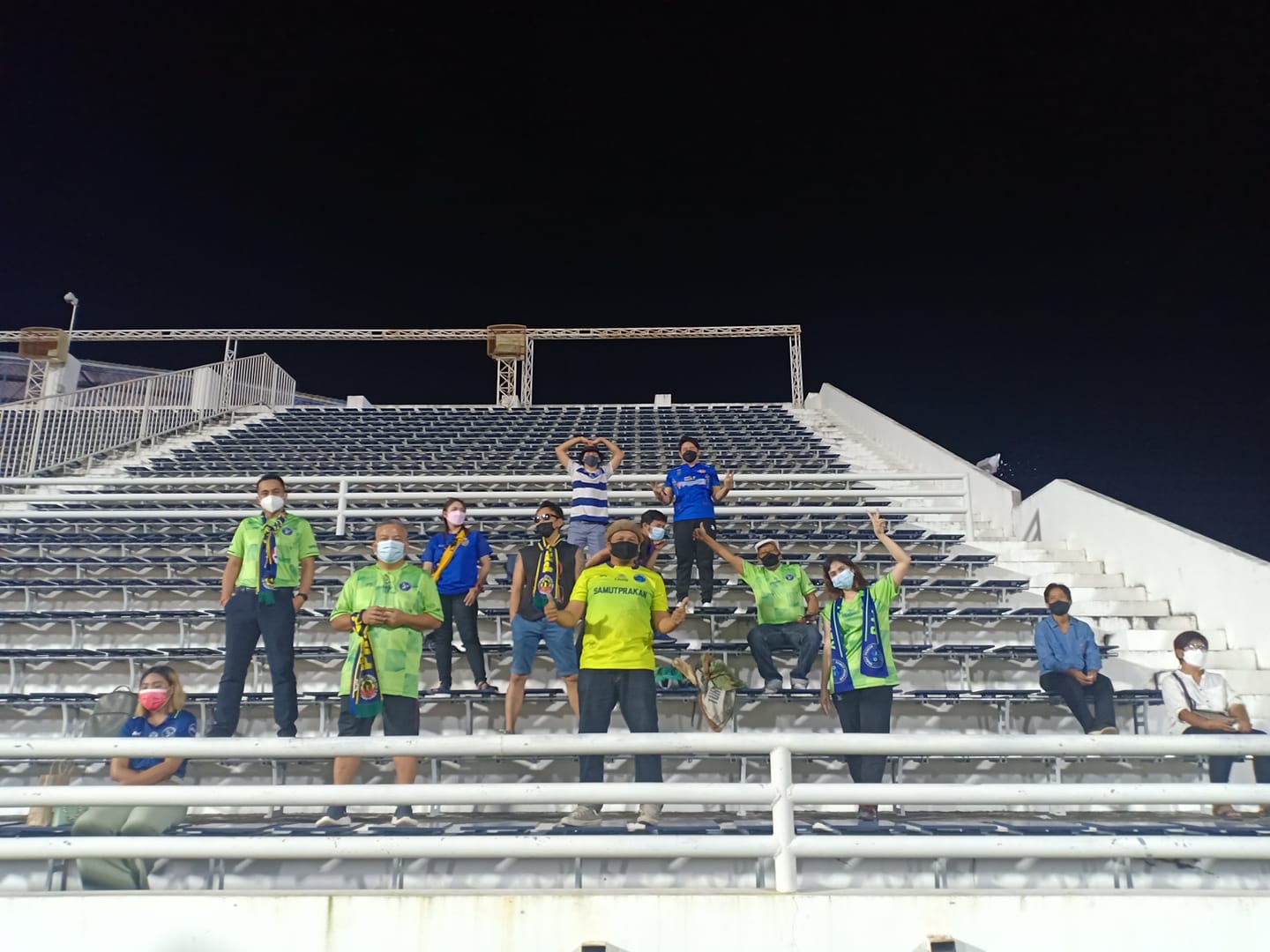 So it's away to PT Prachuap, a fixture you regretted missing last season?

Prachuap is a delightful seaside town about a 4-5 hour drive south of Bangkok, so if you're going then it's best to make a nice weekend of it. There is no airport in Prachuap or indeed anywhere near, so if you don't have your own wheels, you've got a choice of either the public bus or an extremely slow train. It's not the easiest of away journeys to say the least.

I once heard Thai football writer Paul Murphy describe Prachuap as 'the ground that's four hours from anywhere' - and I guess that's one of the main reasons the club relies heavily on picking up home points to survive in the top division. It's an away trip that no other premier league club truly relishes.

Only a handful of Samut Prakan supporters made the journey to Prachuap last season (six if I remember right) but they were rewarded with a fine 3-0 away win. I watched the game on TV and thought 'I'm definitely doing Prachuap next year!'

Err.....it doesn't look like it's going to happen. If my wife had been able to accompany me for a weekend by the seaside, I'd have happily packed an overnight bag, but I just don't fancy that long bus journey and a night or two alone in a strange hotel, especially given that there are still fairly strict Covid regulations in place. It just feels a bit too soon and too much of a gamble, although Prachuap will apparently be allowed 25% of the capacity.

I did have a slight wobble on Friday and for a short while thought about going, but strangely it didn't seem possible to book bus tickets online for the Bangkok to Prachuap route (so not sure they are even running). Khun Pathomchai, who runs the Facebook fan page, was suggesting that interested supporters go by train. When he posted the details, they included getting to some far-flung Bangkok station early in the morning and then facing a train journey of some seven hours.

How are PT Prachuap doing at the moment?

They are 'struggling' in 13th place, having won just one of their opening six matches - a shock 2-1 victory at Chiang Rai United. However, it's harsh to say any team is struggling at the moment with so few fixtures having been played.

Virtually all of Prachuap's games have been tight affairs though and won or lost by just the odd goal. The Killer Wasps might be at the wrong end of the table but they are certainly no pushovers.

The head to head record?

The two clubs have met four times in the league and although Samut Prakan did the double over Prachuap last season (3-0 away and 4-0 at home) they took four points off us the season before.

The two clubs have also been drawn together in the first round proper of this season's FA Cup, with the game due to be played at the Samut Prakan Stadium on October 27th. The players will be sick of the sight of each other come the end of the month.

Adnan Orahovac from Montenegro is the club captain and main man. He's been at Prachuap throughout their four seasons in the top flight and is their most reliable player and the first name on the team sheet. His presence is crucial to a team constantly punching above its weight. The 30-year old central defender has also played for top flight clubs in Montenegro, Serbia and Uzbekhistan.

Brazilian Willen Mota is now back at the club for a second time after a season in the wilderness of division two with Sisaket.

Another player worth a mention is Mehti Sarakhum, an under-19 international, who was on the books at Samut Prakan last season. Although he never got any game time for the Sea Fang, he was sent out on loan to Rayong FC, where he made 18 appearances. Whenever I snatched glimpses of Rayong matches, it was always Mehti that caught the eye. Confident and comfortable on the ball, I still think he's a player that could have done a job for us. Anyway, good to see him featuring regularly in the PT Prachuap line-up.

A win and all three points would be lovely but my head is going for a cagey 1-1 draw.

Coach Ishii makes one change to the team that battled so gallantly at Buriram on Wednesday. The injured Chaiyawat Buran is replaced by Kittipong Sansanit, the ex-Udon United man making just his second start of the season.

To the game itself. First half.

There had clearly been plenty of rain in the hours leading up to the game and the pitch looked very heavy, especially down the flanks; not something that would suit Samut Prakan's passing game. The visitors started brightly though with Chayawat and Phoutthasay both spurning half chances in the opening few minutes.

It took until half way through the first period for Prachuap to conjure up their first real goal attempt. Brazilian winger Dos Santos is put clean through by his fellow countryman Willen Mota but his deft chip over Pathiwat clears both goalkeeper and crossbar. Dos Santos recieves lengthy treatment after clashing with the Samut Prakan custodian and becomes the first substitution of the evening.

Cue Samut Prakan's best opportunity as a 'worldy' of a defence-splitting pass from Eliandro puts Jaroensak into the kind of one-on-one situation he relishes but the Prachuap keeper narrows the angle and deflects it wide of the post.

Ex-Samut Prakan player Mehti Sarakham goes into the referee's notebook for dangerous play, poleaxing Srayut Somphim with a high boot to the forehead. The referee gets word from the VAR room to take a second look and the more it's replayed, the nastier it gets. The ref has little hesitation in upgrading to a red while young Mehti looks close to tears. The felled Srayut takes no further part in the game and is replaced by Saksit Jitvijan.

As the half draws to a weary conclusion, we're finally treated to a quality cross from Jaroensak but Chayawat's header serves only to give the keeper catching practice.

Even on this gluepot, Samut Prakan must have relished the thought of going up against a depleted team for another 45 minutes. 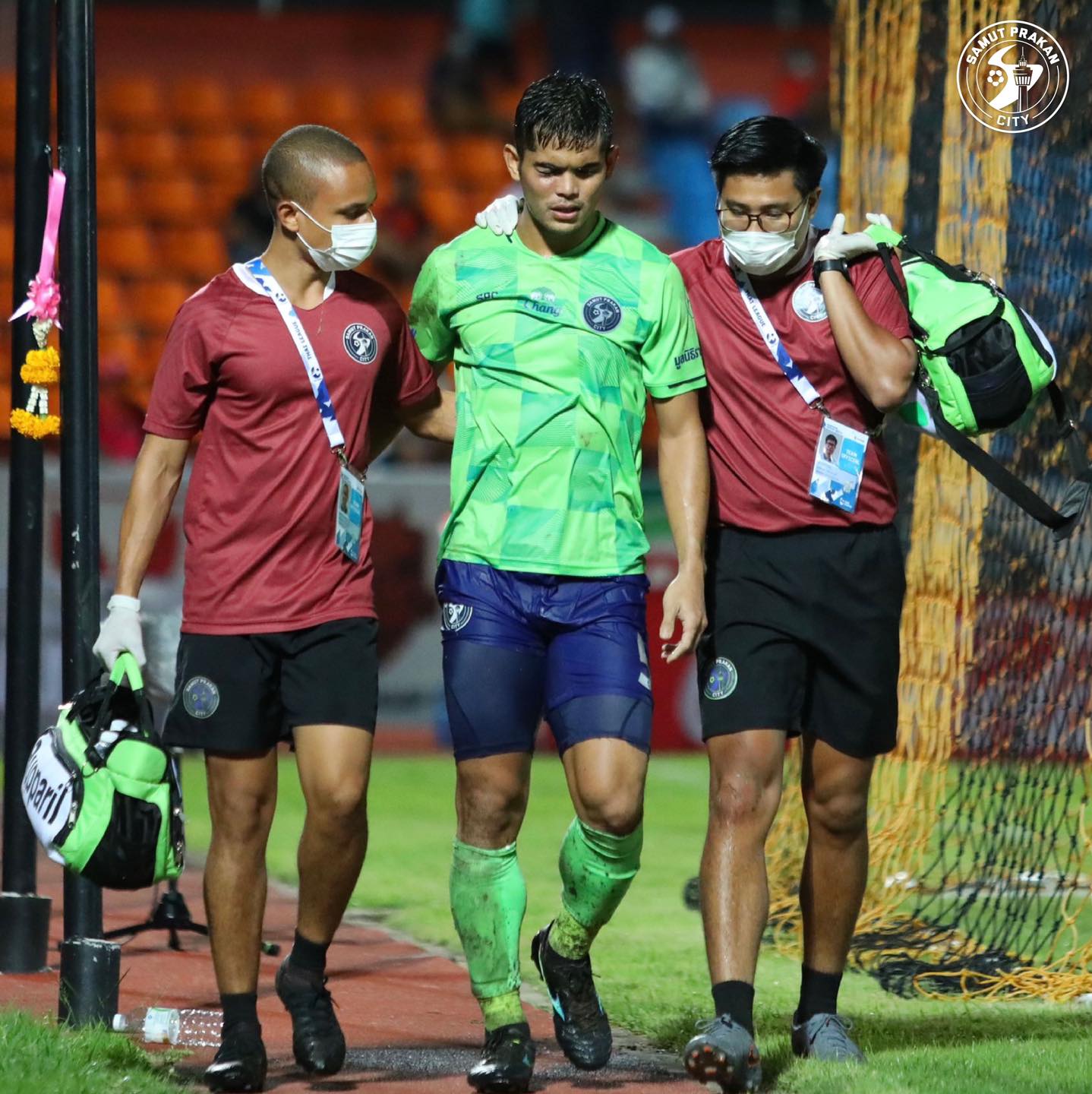 (It looked a nasty facial injury for Sryawat and deserved a red card. Photo: the official Samut Prakan Facebook page)

The Samut Prakan strategy seemed to be to attack the right flank, with a triumvirate of Suphanan, Jaroensak and Eliandro all seeing plenty of the ball. Alas, whether it be Suphanan misplacing a pass or Jaroensak not able to find the big Brazilian target man, it just wasn't coming off.

Aris Jarifovic becomes animated, waving his arms and gesturing to his Samut Prakan team-mates to play the ball forward and cut out the pretty side-to-side nonsense that's eating up valuable minutes.

Jaroensak eventually finds some space to shoot and rattles the underside of the bar but Prachuap remind everyone they're still in the contest by forcing a succession of corners. Pathiwat keeps out a speculative long range effort from Willen Mota as the game becomes more open and the playing surface cuts up from bad to worse.

Noppon Ponkam is thrust into the action as a 73rd minute sub and Mr Woodwork again comes to Prachuap's rescue, this time it's Captain Chayawat who bemoans his luck and can only stare up to the heavens.

With the ref starting to take a closer interest in his stopwatch, Jaroensak tees up a final long range effort that soars well over the crossbar, a last ditch goal attempt born out of sheer frustation more than anything else. Once again, it just wasn't to be Samut Prakan's night. 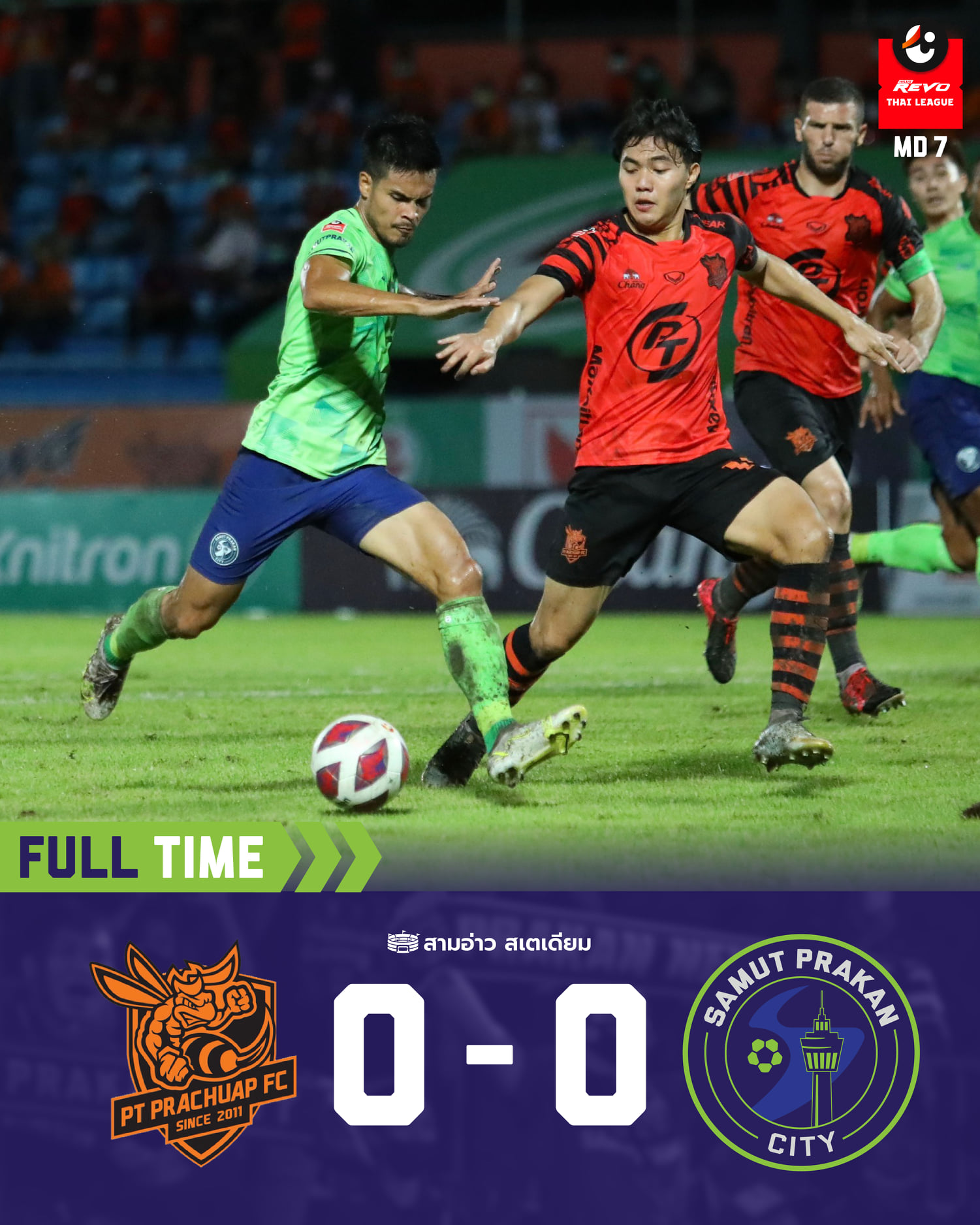 There's an old saying in football isn't there? - it can be tougher to play against ten men than it is against eleven. Lord knows, I've heard many a manager trot that one out over the years. But when you're tryng to break down ten men on an absolute dog of a pitch, the task becomes that much harder. And that was rather the story of tonight's game. We needed just one moment of quality and composure and we couldn't really produce it. We needed just one lucky bobble, ricochet or deflection, and we didn't get that either.

It definitely feels like two points dropped, even allowing for such awful conditions underfoot. But we take a point and we move on to the next game.