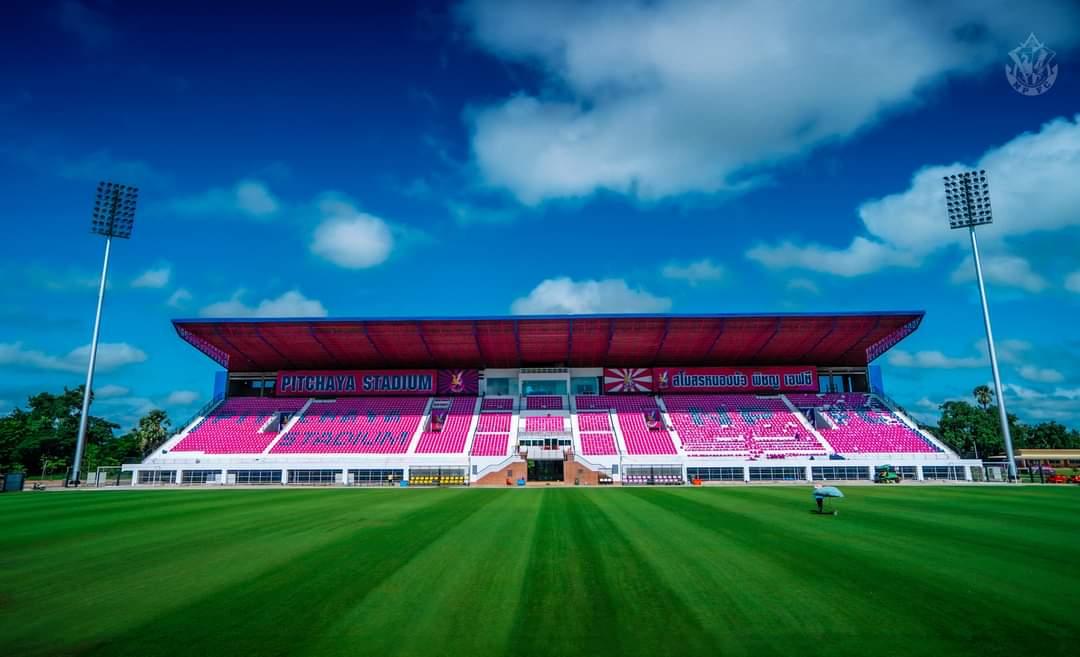 Newly promoted Nongbua Pichaya away. You were looking forward to this one?

I was well excited about the prospect of seeing Nongbua's 'pink stadium' up close and getting soaked in the uncovered away section (no, seriously I was).  There was a wonderful sense of adventure about the whole trip, which would include taking a one-hour flight from Bangkok to Udon Thani (the nearest big city) and then working out the best way to do the one-hour journey from there to the small town of Nongbua Lamphu, where the ground is situated (local bus, hire taxi, horse and cart?)

At first glance, the trip sounds like one gigantic, logistical ballache - for instance, there are only two or three hotels in Nongbua Lamphu - but an interesting challenge all the same and probably well worth the effort. Alas, the adventure will need to be put on hold for a season.

As these are new boys in the Thai Premier, perhaps a bit of club background?

After a number of cash-strapped seasons, with sponsors EGAT soon bailing out, things took a dramatic turn in 2015, when wealthy owner, Suthep Poomongkolsuriya, took over the club and soon established himself as a man with vision. His six-year reign at Nongbua has resulted in a gleaming new 6,000 capacity stadium (opened in 2020) an enviable youth policy, and ultimately promotion to the Thai Premier League, coming up as champions last season with just one defeat in 34 matches. 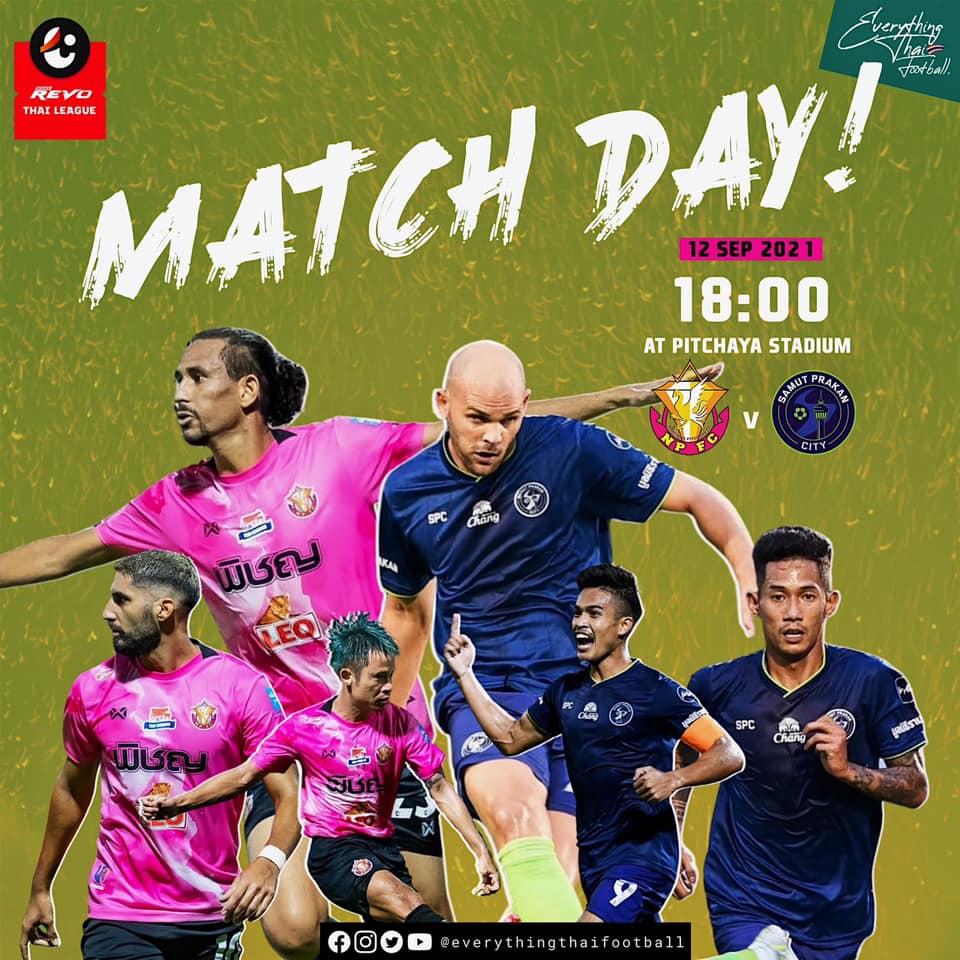 Who are their players to watch?

I sat through Nongbua's opening league game last Friday - a 2-0 home win against Nakhon Ratchisima, played on a hopelessly waterlogged pitch - and the player who caught the eye was undoubtedly Hamilton Soares. The tall, leggy Brazilian striker struck with two clinical finishes in the first half and that was effectively game over. We'll certainly need to keep an eye on him this evening.

In addition, Santhaporn Daengsee is an experienced defender who joined from Trat FC after they were relegated last season, and Lidor Cohen has come in from Hapoel Tel Aviv and is playing outside of his homeland for the first time in his career, having notched up around 250 appearances for various clubs in the Israeli league.

Are fans allowed into this game?

I believe Nongbua are allowed 25% of their capacity, which would be around 1,500 fans. They didn't get anywhere near that number for last week's game at home to Nakhon Ratchisima though. Just 418 hardy souls turned up for the Friday night action, but I'm sure that was more down to fans not being vaccinated than the awful weather.

Nongbua have already announced on their Facebook page that away fans will not be allowed entry. The government has also announced that 'dark red zones' will remain as 'dark red zones' until at least the end of this month. It's looking like October or beyond before Samut Prakan fans get to see any live action - and even that feels optimistic.

I feel confident about this one but admit it's a game that could go either way. Nongbua will be keen to prove that opening day win was no fluke but I'm going for Samut Prakan to nick it 2-1. 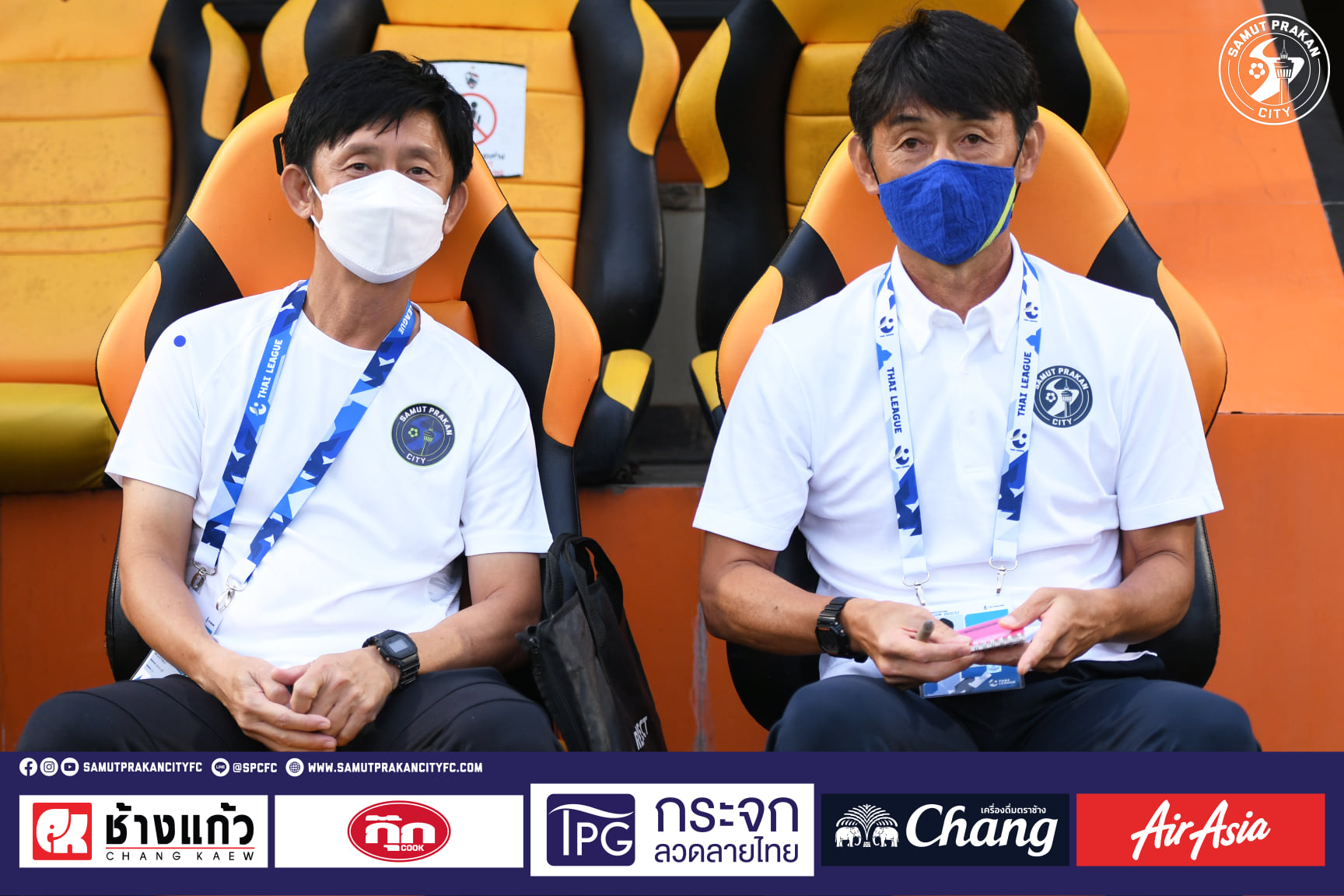 (Can Manager Ishii-san guide us to our first victory of the season?  Photo: the official Samut Prakan Facebook page)

To the game itself. Any changes in the Samut Prakan starting XI?

No. Ishii-san went with the same team that drew away at Chiang Rai last weekend.

The game kicked off just after 6.00 pm in a stadium bathed in the glow of a setting sun. With its mountainous backdrop, Nongbua really does provide the most picturesque of settings for a football match.

Samut Prakan, in their second change lime green shirts, made the brighter start, with Eliandro and Jaroensak both squandering decent chances in the first 20 minutes but it was to become a frustrating evening for the little and large attacking duo. I'm not convinced pumping long balls up to the muscular Brazilian is a tactic we should be persevering with. Route one football just isn't Samut Prakan's style.

Hamilton Soares, the Nongbua danger man, had to wait 25 largely anonymous minutes for his first sniff at goal but poked his shot wide. His frustration became contagious as Iranian team-mate, Mahan Rahmani, was shown a yellow for a nasty foul on Noppon Phonkam.

Samut Prakan's best chance of getting their noses in front was most likely to come from a set piece, and so it proved as a Yuto Ono corner was met by Aris Jarifovic, leaping above the Nongbua defence to plant a bullet header into the top corner. Just a minute later, Eliandro could have doubled the lead, but one-on-one with the keeper, he left the angle too acute and the goalkeeper with a relatively routine save.

Samut Prakan's Chaiyawat Buran then became the second name of the evening to go into the referee's notebook as he took one for the team with a blatant bodycheck to thwart a Nongbua counter-attack.

Nongbua attacked with far more intent in the second period. A farcical goalmouth melee in the 53rd minute ended with keeper Pathiwat, almost in slow motion, clawing the ball off the goal-line and to safety.

Still defending that slim lead, Samut Prakan weathered a twenty minute storm of pink shirts before regaining some composure. Perhaps feeling the game was slipping away, Nongbua's Mahan Rahmani was fortunate not to get his second yellow for a clumsy challenge on Eliandro.

The home side's attacks started to become more infrequent and what crosses they could deliver were swiftly dealt with by Jarifovic. Samut Prakan's giant Slovenian centre half had an inspired evening.

Just as he did against Chiang Rai last week, Prakan manager, Ishii, made three late substitutions to see out the final ten minutes. Eliandro was the first to receive the crooked finger. It had been a fruitless evening for the Brazilian striker - but thankfully an even more frustrating evening for the 463 home fans in attendance. 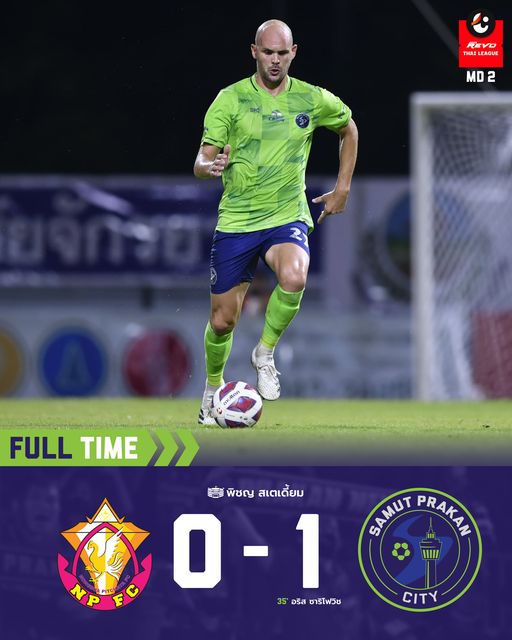 I don't want to undermine a hard-fought, excellent away win but if we have aspirations of another top six finish, we need to be beating the likes of Nongbua. A number of Thai football writers and commentators have The Gamecocks down for a swift return to the second division and it wasn't difficult to see why. It wasn't that they were particularly bad: they simply looked very beatable.

After all the weekend's results have been factored in, Samut Prakan City climb to 4th in the league, one of five clubs with four points from their opening two games. Which means of course, no team has a 100% record - even this early in the season.

We've made a great start to the campaign, but there are much tougher tests to come...starting this Friday.

It's our first home match of the season as we meet Bangkok United for a Friday evening fixture (17th September 18.00) This is sure to be another closed doors game.