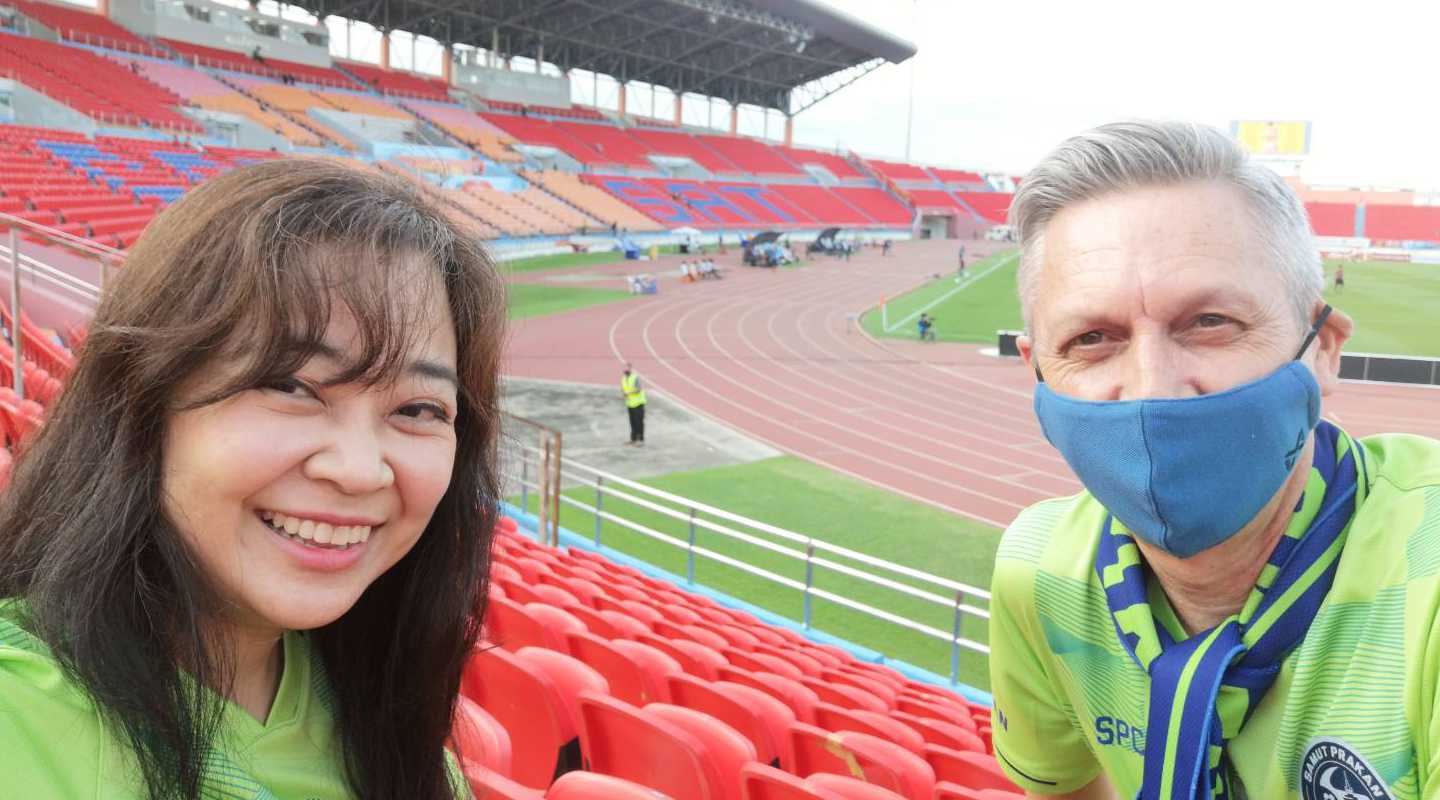 (Another trip to Nakhon Ratchisima's great big empty 80th Birthday Stadium - and this time the boss is with me!)

So it's Nakhon Ratchisima away. What's the plan?

My wife will be accompanying me on this trip (her first game of the season) so we're going to make a weekend of it. The plan is to drive up to Khorat early on Saturday morning, see the match, stay overnight, have a nice meal or two - and return to Samut Prakan on Sunday. At the time of writing this intro, parts of Nakhon Ratchasima Province had been inundated with floods due to heavy rainfall and a leaky dam, plus the area had been put on a government Covid watch list after experiencing several new outbreaks. We decided to book a hotel and push on regardless.

How are Nakhon Ratchisima doing this season?

They are currently in 12th (four places below Samut Prakan) having lost half of their eight games so far. Their two wins - against Suphanburi and Police Tero - have both been at home.

What's the head to head record between the two clubs?

Samut Prakan and Nakhon Ratchisima have met five times and it's a real mixed bag of results. There have been two draws, one win for Nakhon Ratchisima (a  comprehensive 4-1 victory back in 2019) and a couple of wins for Samut Prakan. The most recent of those victories came in the FA Cup last season when the two sides faced off in the very first round and Samut Prakan edged it 1-0.

I don't often give a mention to goalkeepers in the players to watch section but Khorat's Thanachai Noorach is considered one of the best shot-stoppers in the Thai league.

Amadou Ouattara is a striker that's never done much for me but seems highly rated and a cornerstone of the Khorat attack. The 30-year-old Ivorian began his career in the Norwegian lower leagues but has been playing in the distinctly warmer climes of Thailand for the past decade.

Kwame Karikari is a 6 ft 3 striker from Ghana who always seems to be in the thick of the action whenever I catch highlights of Swatcat games. His 12-year football career has seen him rack up an impressive list of clubs and countries, including spells in Qatar, Kazekhstan, Israel and Sweden. He must have one very busy agent because he doesn't seem to stay at any club for more than a season. 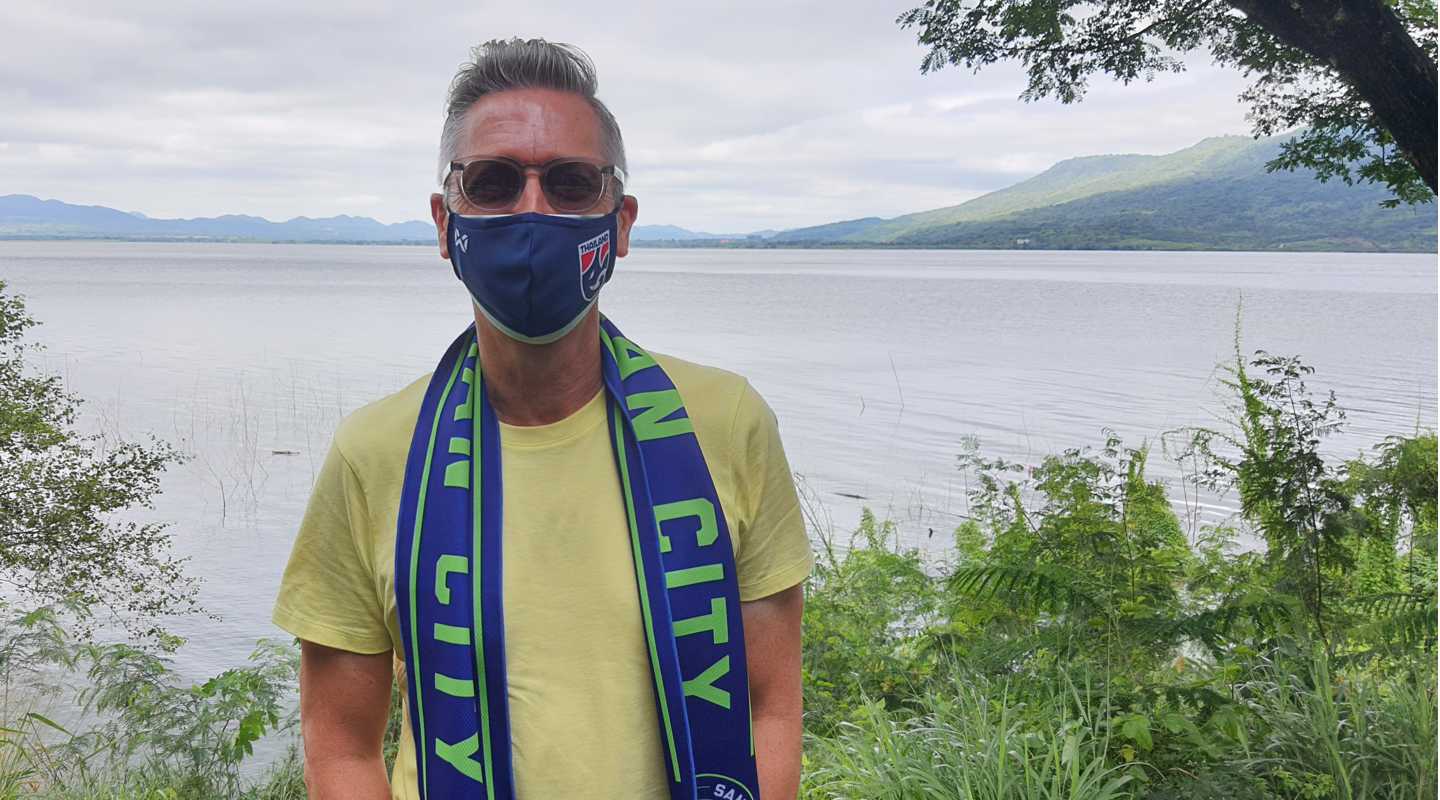 We left Samut Prakan at 8.00 in the morning and covered the 272 kms to Khorat in well under five hours, and that included a lengthy stop at the Lamkatong Dam to have an iced coffee and to stretch our legs. My wife said that when you reach the Lamkatong Dam, you know you're well and truly in Khorat Province. I must mention the weather as well. As we sat at the water's edge with coffee and snacks, it was decidedly chilly. I kid you not when I say a light sweater wouldn't have gone amiss! 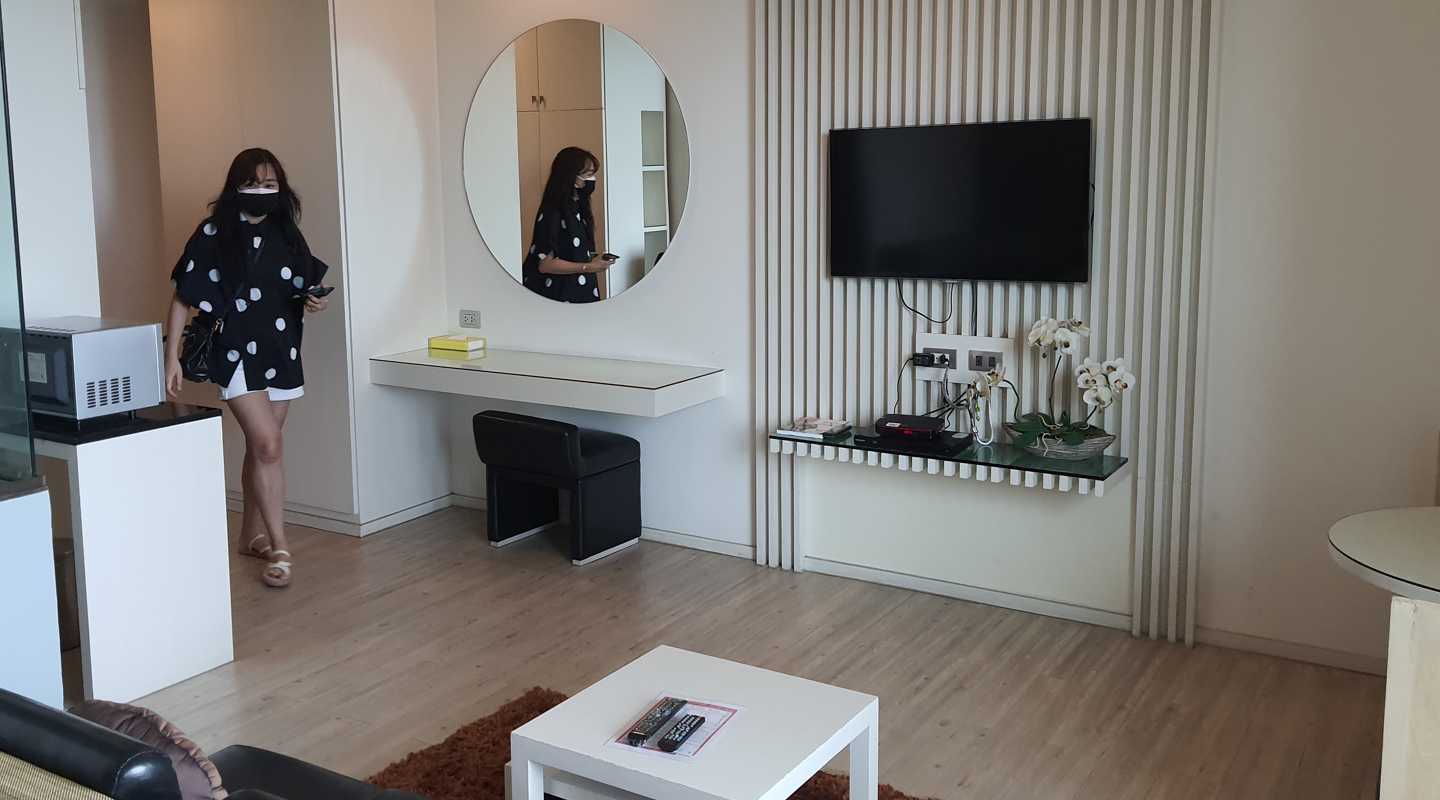 (Our room had a distinctly 70's retro feel. I wish I'd packed my silk dragon kimono and a bottle of Hai Karate after shave)

We booked a night at the rather sumptuous-sounding Beverley Hills Khorat for around 1,500 Baht. Mid-range hotels in Thailand have suffered badly during the Covid pandemic through lack of guests and a lack of income. It's all about survival with these guys. My 'American breakfast' on the second day was probably the worst I've had in Thailand, and the hospitality tray in our room, along with the mini-bar, were virtually empty. We took a walk up to the top floor, where we found a deserted swimming pool, a snooker room with the full-size table covered over with a dust-sheet, and a very nice gym full of equipment going unused and unloved.

But the staff tried so hard to make our stay memorable. They gave us an upgrade to one of their premium rooms as soon as we checked in and generally couldn't have been more helpful. My wife and I agreed that all things considered, the hotel was worth a solid 7/10. 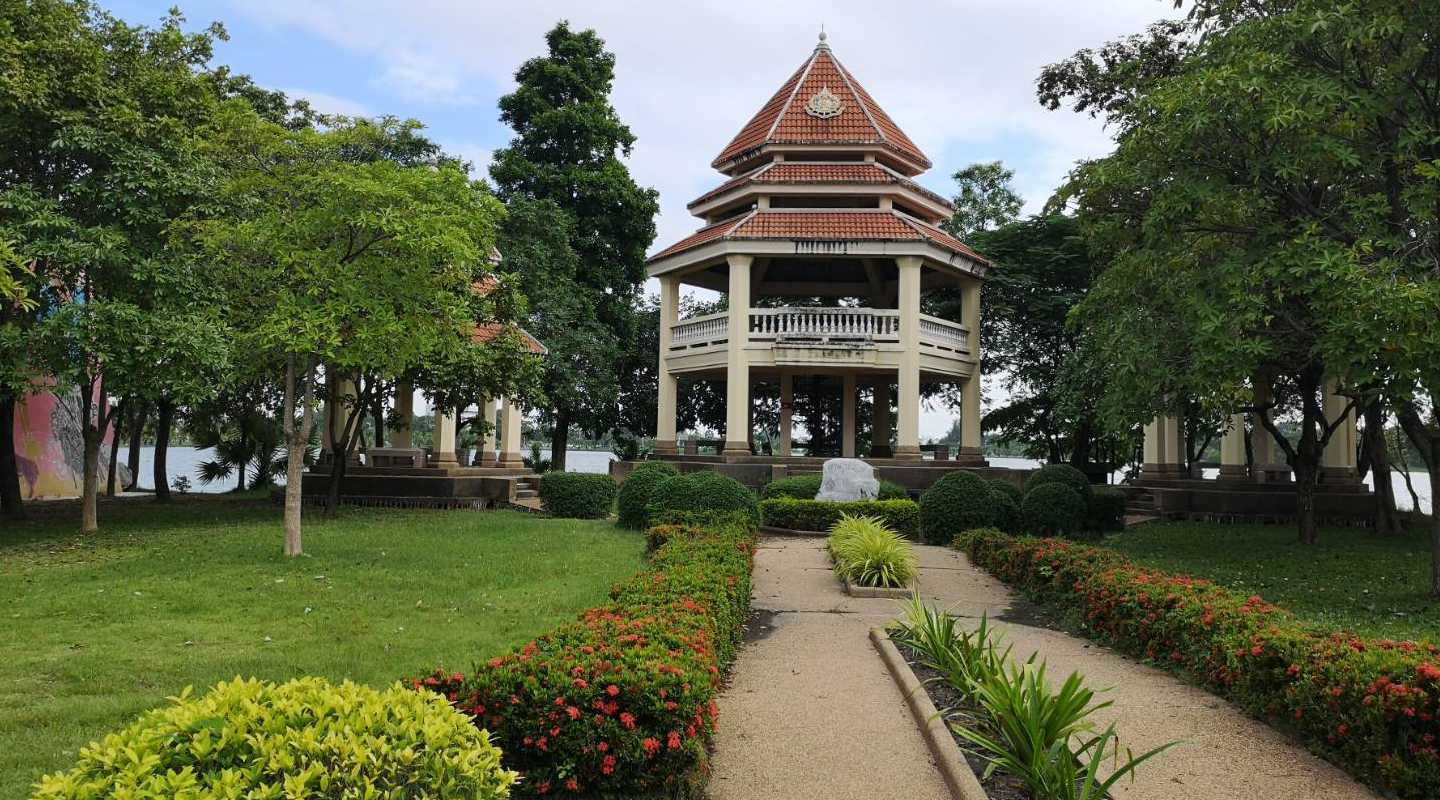 (The Bung Ta Lua park and lake complex has a running track, bicycle lanes, outdoor gyms and no end of interesting attractions. On Sunday morning the lake was a very popular spot for fishermen)

Undoubtedly the hotel's biggest plus point is its location, opposite the Bung Ta Lua park and lake. We took a stroll around there both before the match and on Sunday morning and it's probably the most well-maintained public park I've seen in Thailand. An absolute credit to the city!

We got to Nakhon Ratchisima's 80th Birthday Stadium about an hour before kick off. Gaining entry into the stadium and going through the obligatory vaccine checks was all very straightforward but disappointing to find that all the refreshment kiosks were closed. The two small bottles of water that Tun had snuck into her backpack proved to be life savers!

The view from the away end might be lousy but it's a lovely stadium and one that deserves big crowds. An attendance of just 948 provided little atmosphere but such are the times we're living in. I'd love to witness a game here when it's packed to the rafters. 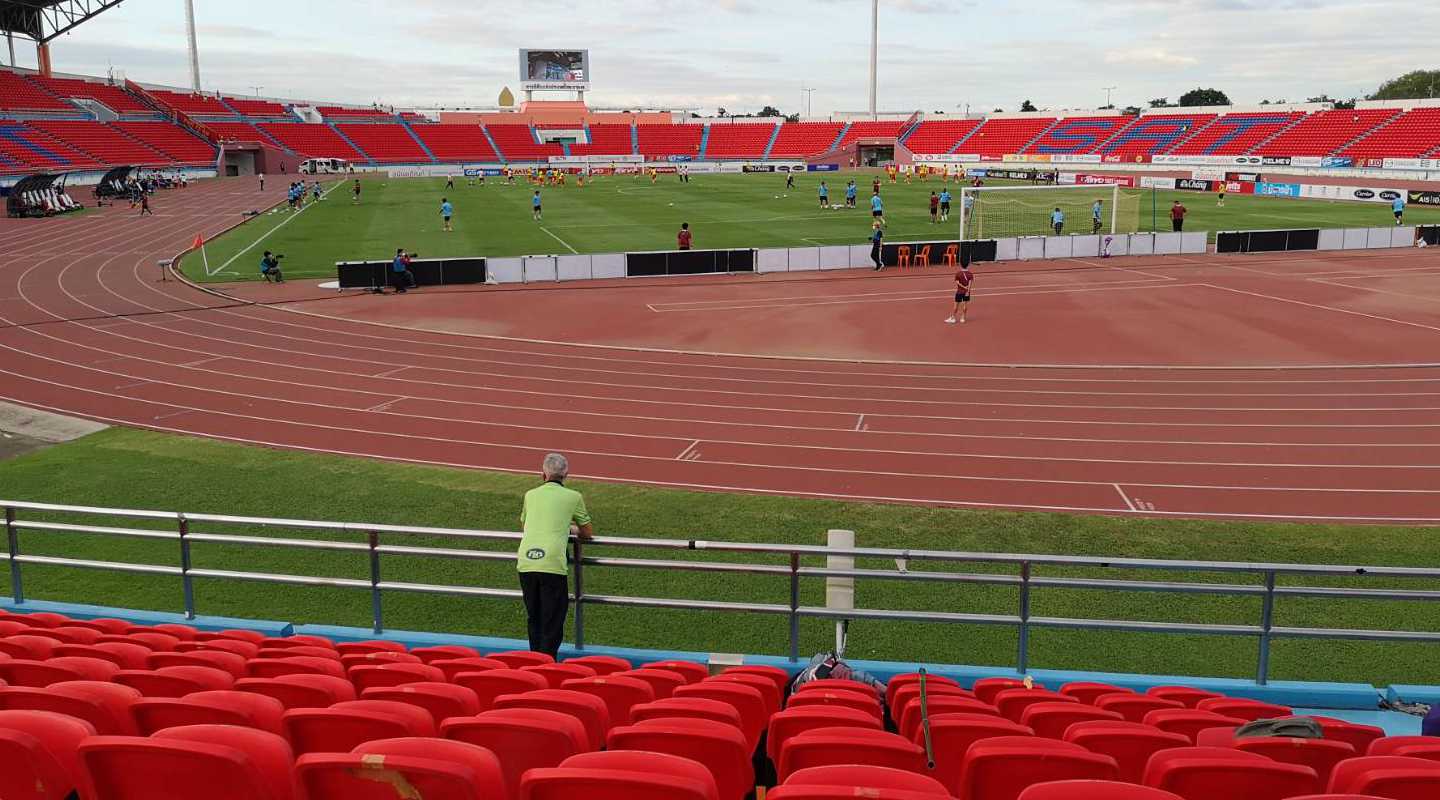 (Where the hell is everybody?)

The first half had few talking points, and didn't really spring to life until the final five minutes. Up to that point, Eliandro had hit a tame shot straight at the keeper in a rare Samut Prakan attack and Amadou had clipped the post for the home side. Just as you wondered where a goal was coming from, a Swatcat attacker is brought down in the box by Srayut Somphim and the ref points to the spot. Srayut receives a yellow card as does Chayawut Buran for impolitely suggesting the ref take a look at the VAR screen. Eventually the man in green does take a look and decides there was minimal if any contact. The spot-kick decision is reversed and Srayut's yellow card rescinded. Chaywat is not so lucky though and his yellow still stands.

Samut Prakan's joy is short-lived as in first half injury time, Amadou rises above his marker and plants a superb header past Pathiwat to put the Swatcats a goal up at the interval.

The injured Yuto Ono is replaced at the break by Phoutthasay (a big loss because the Japanese midfielder is having a terrific season). Mid-way through the half, the visitors lose Noppon Khonkam, shown the red card for elbowing an opponent in the face. Down to ten men, Samut Prakan probably enjoy their best period of the game in the final twenty minutes but an equalising goal remains elusive.

I've squeezed that match report into a few lines, because sometimes there's no glossing over the truth - that was a painful watch for Samut Prakan fans. I'd say it was our worst performance of the season by some distance. Frankly, we just never got going and it was a dejected-looking bunch of players that came over to applaud the travelling support at the final whistle.

The most annoying part is that Nakhon Ratchisima didn't look any great shakes themselves and didn't need to play that well to secure all three points.

Let's put a bad day at the office behind us. This time around, I'd rather remember the weekend itself and the chance to do a bit of travelling, more than the 90 minutes of football we had to sit through.

It's the magic of the FA Cup first round proper (64 teams) and an all T1 clash between Samut Prakan and PT Prachuap down at Bang Plee on Wednesday 27th October, kick off 6.00 pm.