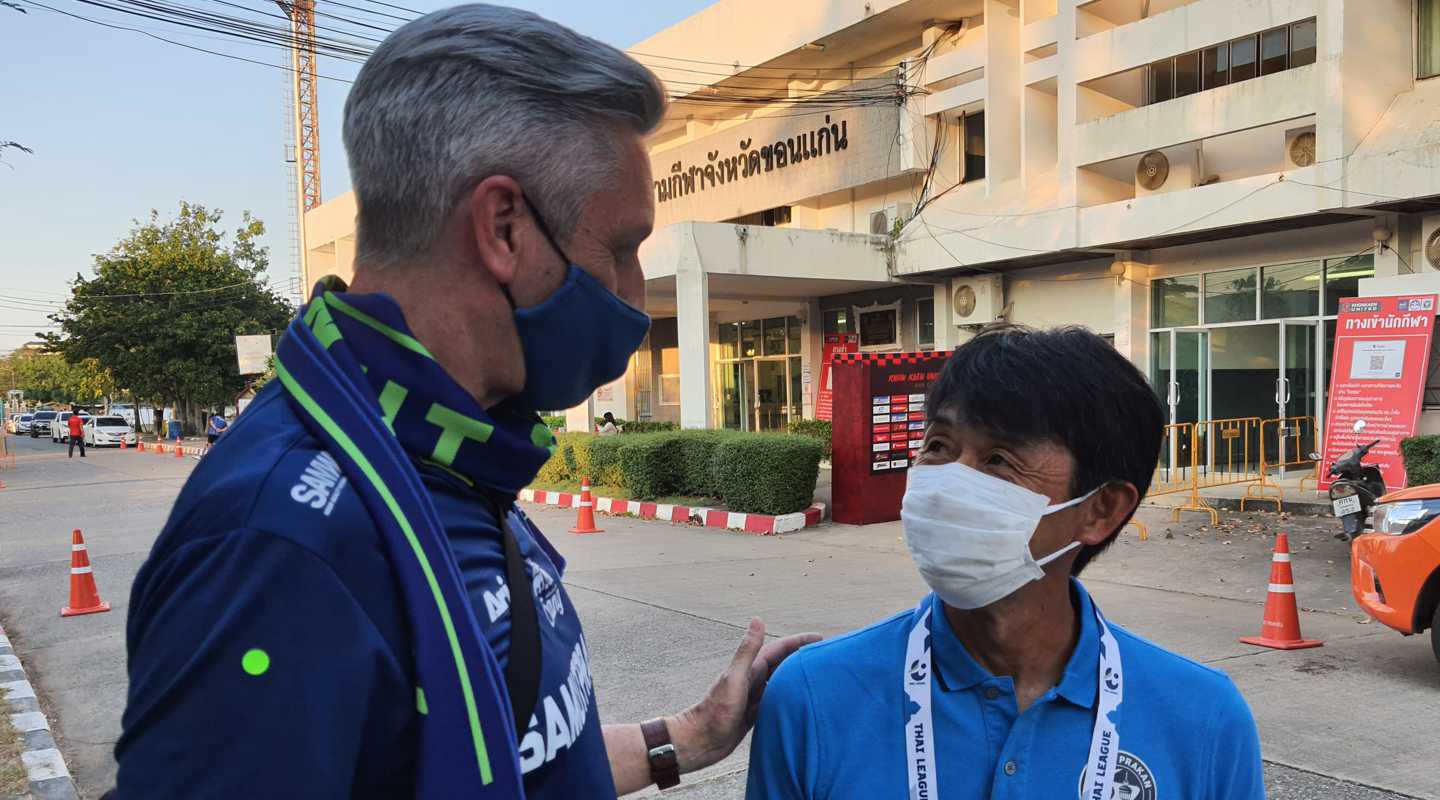 Let's get the bad news out of the way first. Coach Ishii is leaving for pastures new?

Yes, the Thai football media jungle drums starting beating loudly in the days leading up to the match, saying that Ishii-san had accepted the coach's job at Buriram - and where there's smoke, there's often fire. Come the day of the match, the news had been confirmed - starting in December, Ishii would take over at Buriram for at least the second half of the season.

The end of an era?

Despite our lowly league position, Ishii has been magnificent for Samut Prakan. He's worked well with the players at his disposal and conducted himself with a quiet dignity throughout; a wonderful man both on and off the field and I'm so glad I got the chance to say a proper goodbye to him at the stadium and to thank him for all he'd done for the club. Samut Prakan fans wish him well for the future and hold no grudge against him whatsoever. Big managers deserve their chance at big clubs. That's the way football works the world over.

You've been looking forward to this game?

Very much so. Khon Kaen is a city I've heard many good things about but never had the chance to visit and of course it's the opportunity to tick off another Thai football stadium.

What was the plan?

The plan was to fly up on Friday morning and return on Sunday afternoon, giving us a good 48 hours to both see the match and take in some of Khon Kaen's attractions.

How are Khon Kaen United doing this season?

Their season has been almost a mirror image of Samut Prakan's. Both teams have 14 points from 14 games. Both teams lie just four points above the relegation zone. Both teams desperately need a win.

The only noticeable contrast is Samut Prakan's far superior goal difference. Khon Kaen have had a few tonkings this season including a 4-0 defeat at Buriram last weekend and an incredible 7-0 home loss to Chonburi back in September. 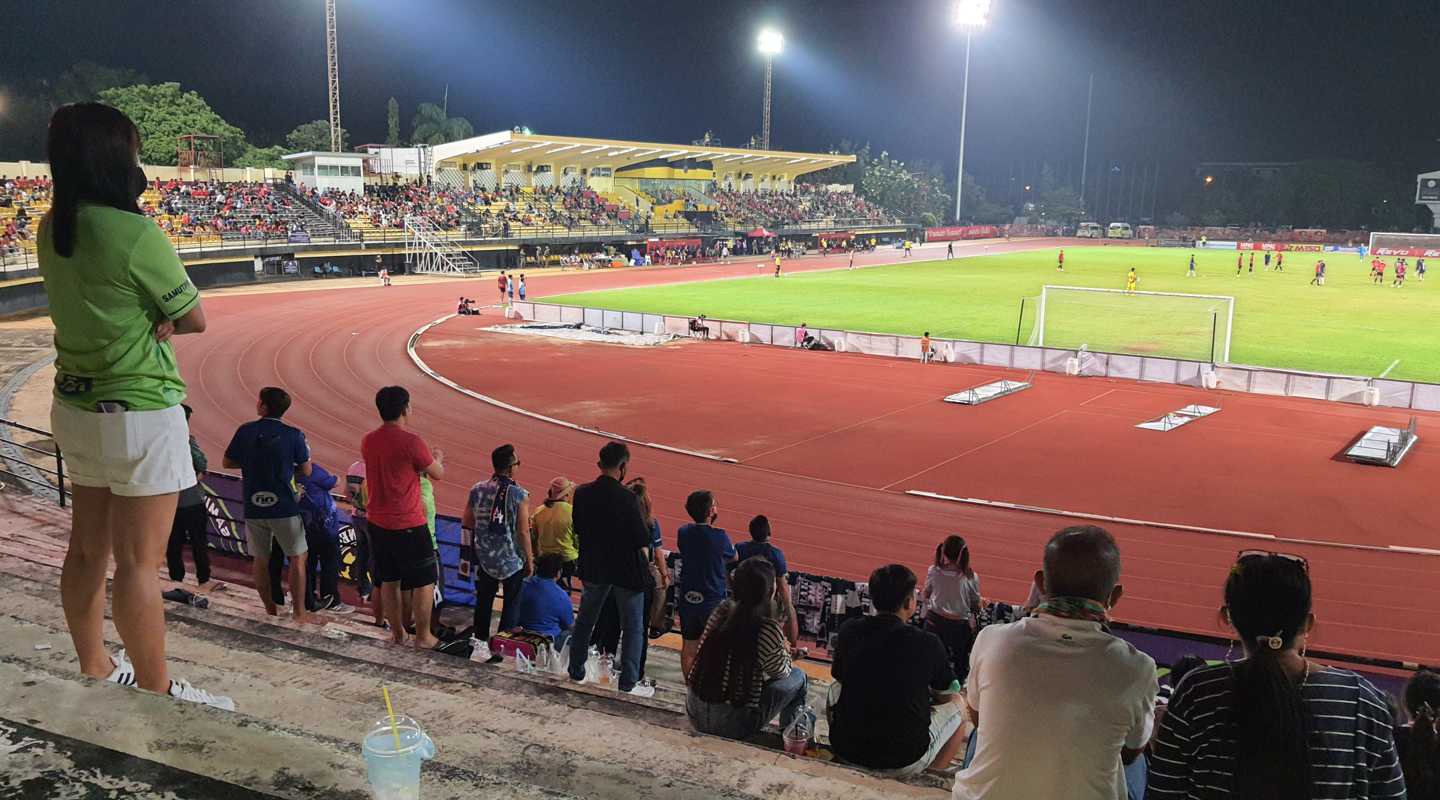 (The away end at Khon Kaen's Provincial Stadium)

The two clubs have never met in the Thai Premier League so perhaps some background?

The King Cobras were formed as recently as 2014 and play their home games at the Khon Kaen Provincial Stadium, which holds 7,000 spectators and is located in the centre of the city (I do love football weekends to new places where the airport, city centre hotels and stadium are all within easy reach of each other) The club started life in a second tier regional league but were then banned for a season due to criminal activity (I'd love to find out more on that story)

When normal service resumed in 2018, Khon Kaen found themselves demoted and languishing in the fourth division but three successive promotions has landed them a place at the Thai league's top table. Can they stay there is the big question?

And it's the chance to meet up with an old friend?

Like most other top-flight Thai football clubs, Khon Kaen has a smattering of Brazilian players and one of them is Ibson Melo, Samut Prakan's first superstar player if you like.

Ibson scored 17 goals in that wonderful inaugural campaign before leaving for what became a tough season for him at struggling Sukhothai (who were eventually relegated).

Now in his third Thai league season, he finds himself at Khon Kaen, where he's recently signed a new two-year contract. He obviously likes it up north! 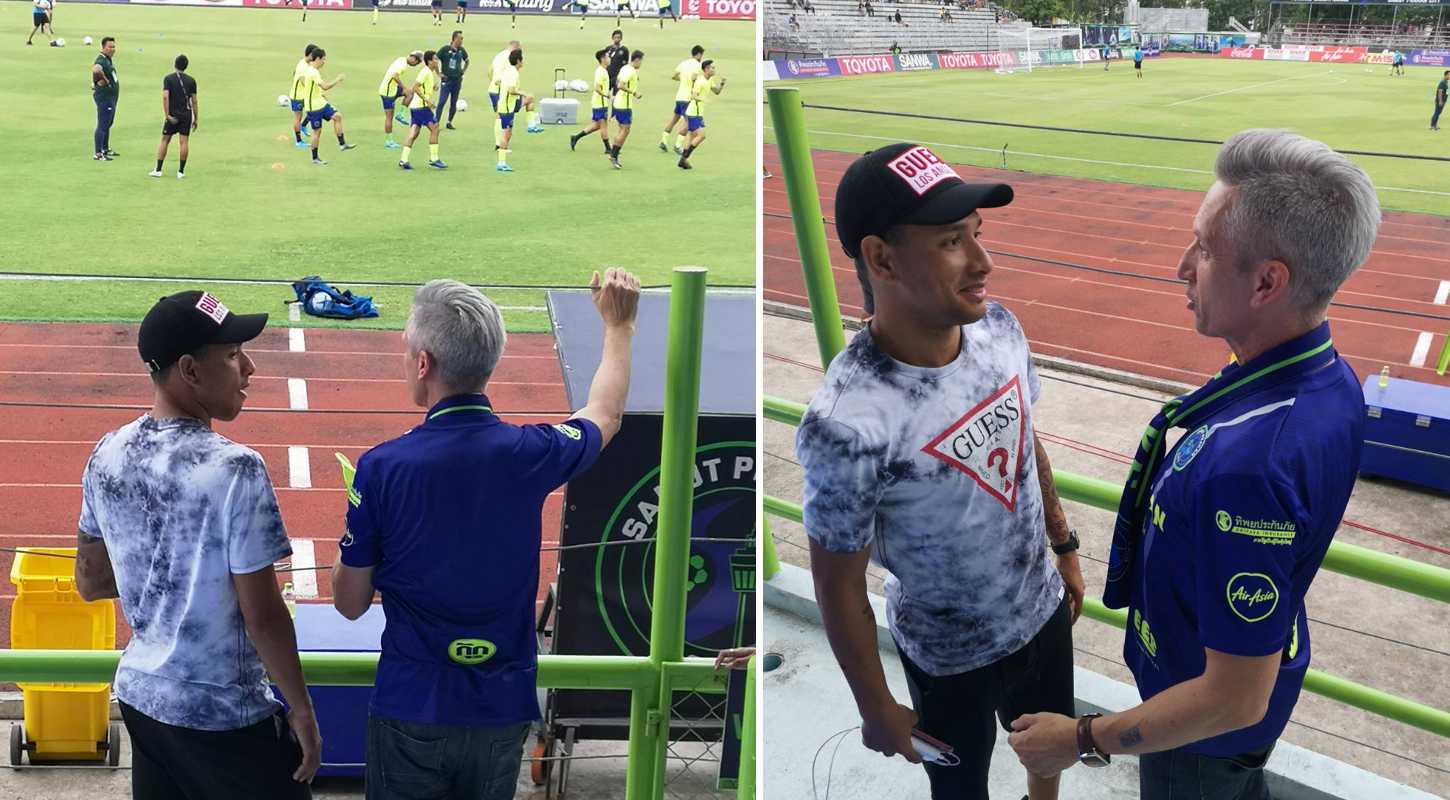 (We loved Ibson Melo at Samut Prakan. He'll always have a special place in our hearts)

The journey and digs?

The flight to Khon Kaen is a comfortable 45 minutes from Bangkok Airport and I was pleasantly surprised to see the plane virtually full, with mostly Thais of course but also a good few foreign faces (Khon Kaen has always been a popular city for retired, long-term expats)

For our two nights accommodation, we chose the Avani Convention Centre, one of the city's best-known, top end hotels.

Frankly speaking, I found it a little on the bland side. The service was excellent, as was the breakfast buffet, but our room looked tired and in need of some refurbishment. It's often a characteristic of rural hotels that are used predominantly for corporate functions.

The biggest drawback though was the hotel's relatively poor location. The Avani is a fair distance from downtown Khon Kaen but thankfully we had Grabcar to rely on and used them extensively during our stay.

For our first evening in Khon Kaen, we had a pleasant sunset stroll around the Kaen Nakorn reservoir and its adjoining food stalls, before finishing the night at the Ton Tarn night market. The only let down was that no one was selling any beer - and I just fancied an ice cold brew! 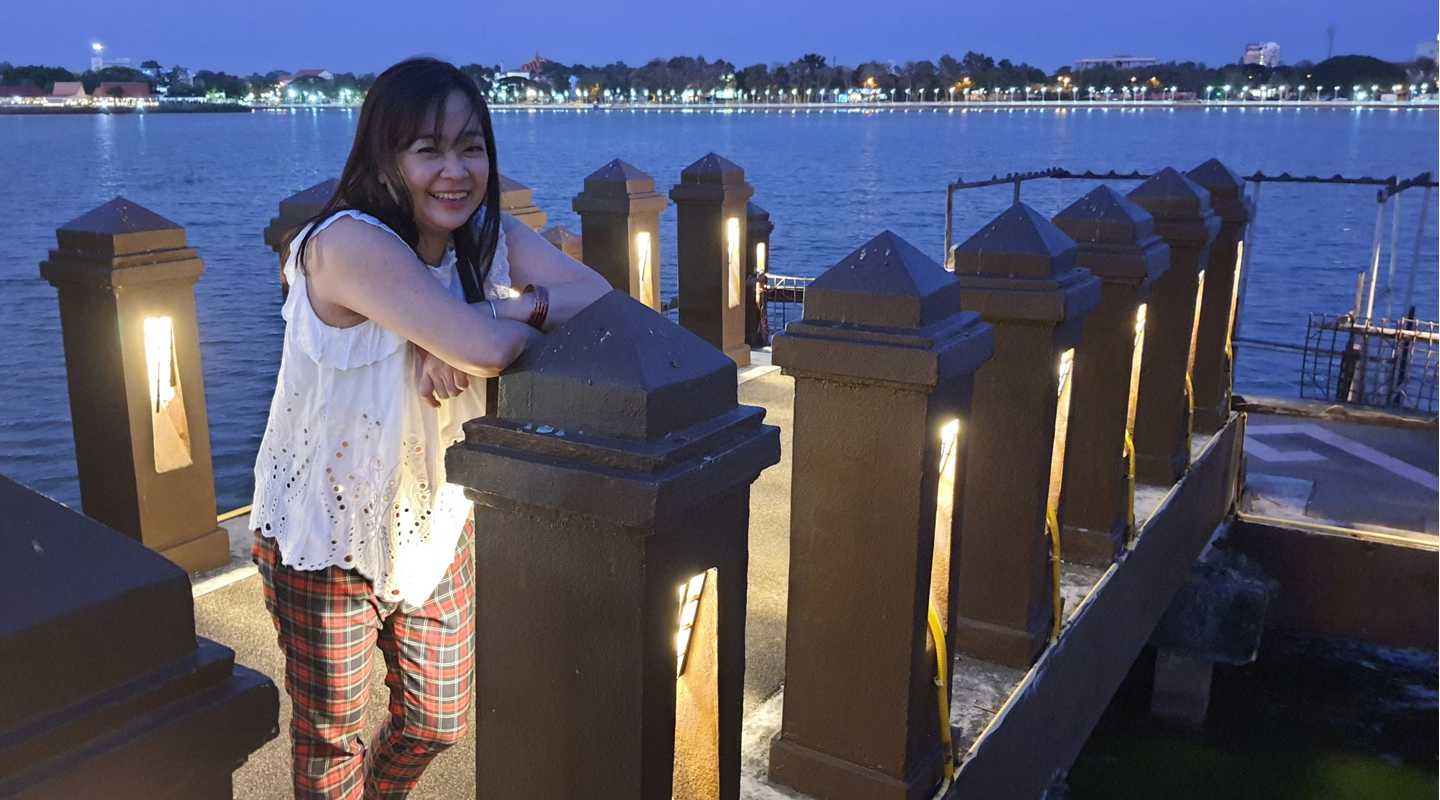 (It was a lovely 18-20 degrees up in north-east Thailand on Saturday evening. The cool season had arrived!)

We spent the morning and early afternoon at Khon Kaen's excellent Natural History Museum and Cultural Center, which are both on the grounds of Khon Kaen University. They were ideal places to kill a few hours before a football match. 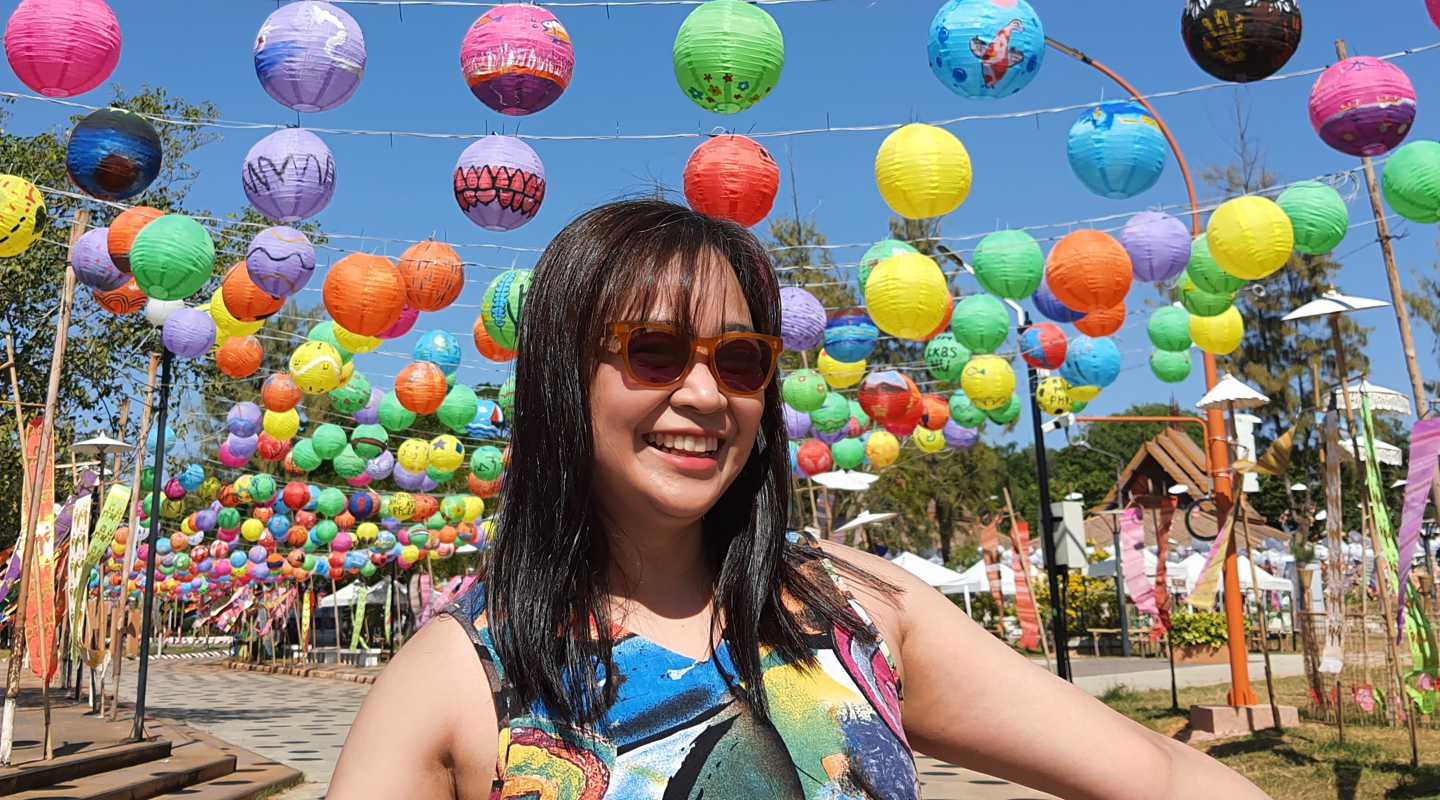 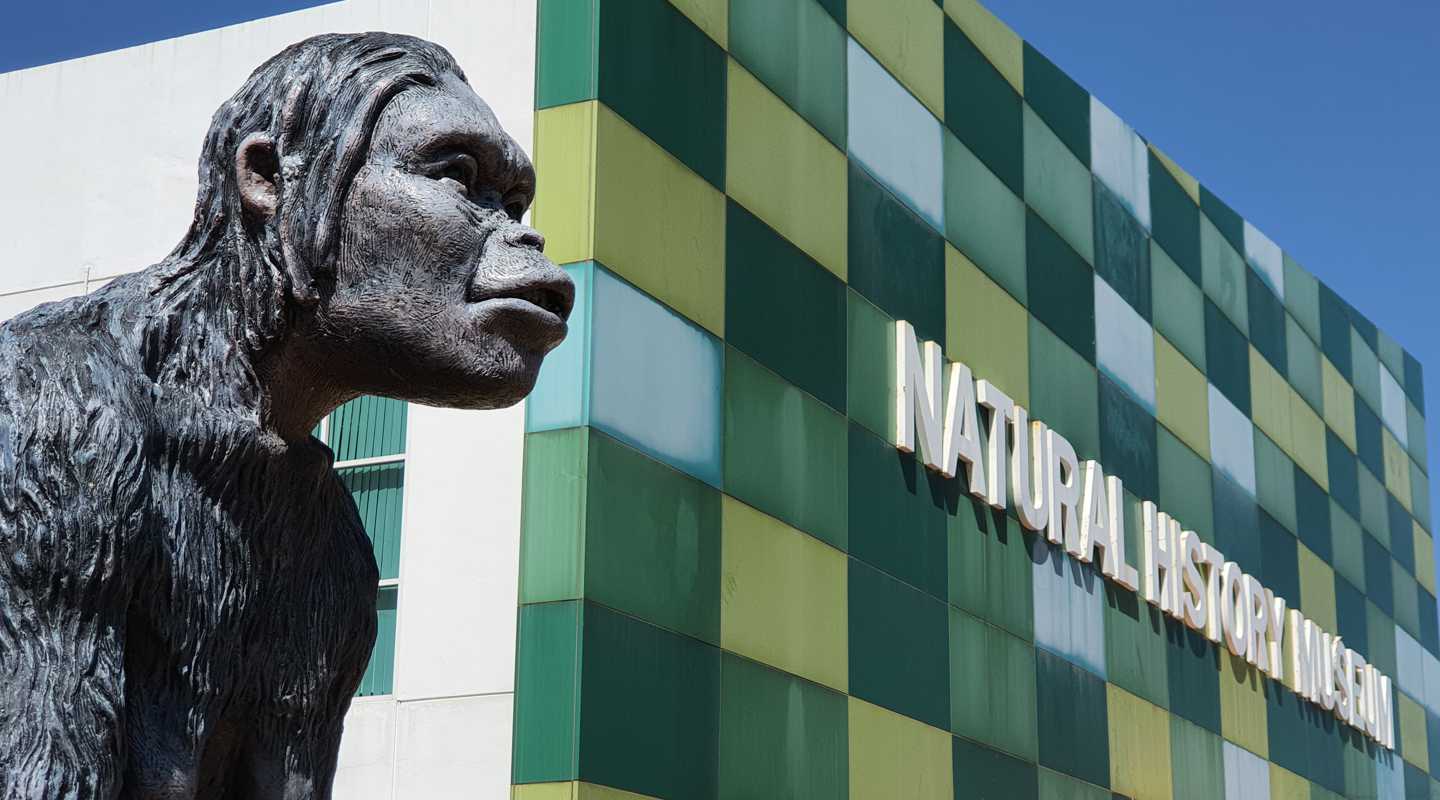 (The Natural History Museum has a terrific dinosaur and stone age section, but many other attractions besides)

What were your thoughts on Khon Kaen's stadium upon arrival?

As Tun commented, it was a typical government-owned and government-run sports stadium. This usually translates as 'it could do with a good lick of paint' and 'what on earth is that unsightly stack of old chairs doing there?'. But in all fairness, there was a good selection of food and drink vendors, the ticket booth was easy to find, and the view from the away end was nowhere near as bad as I expected. 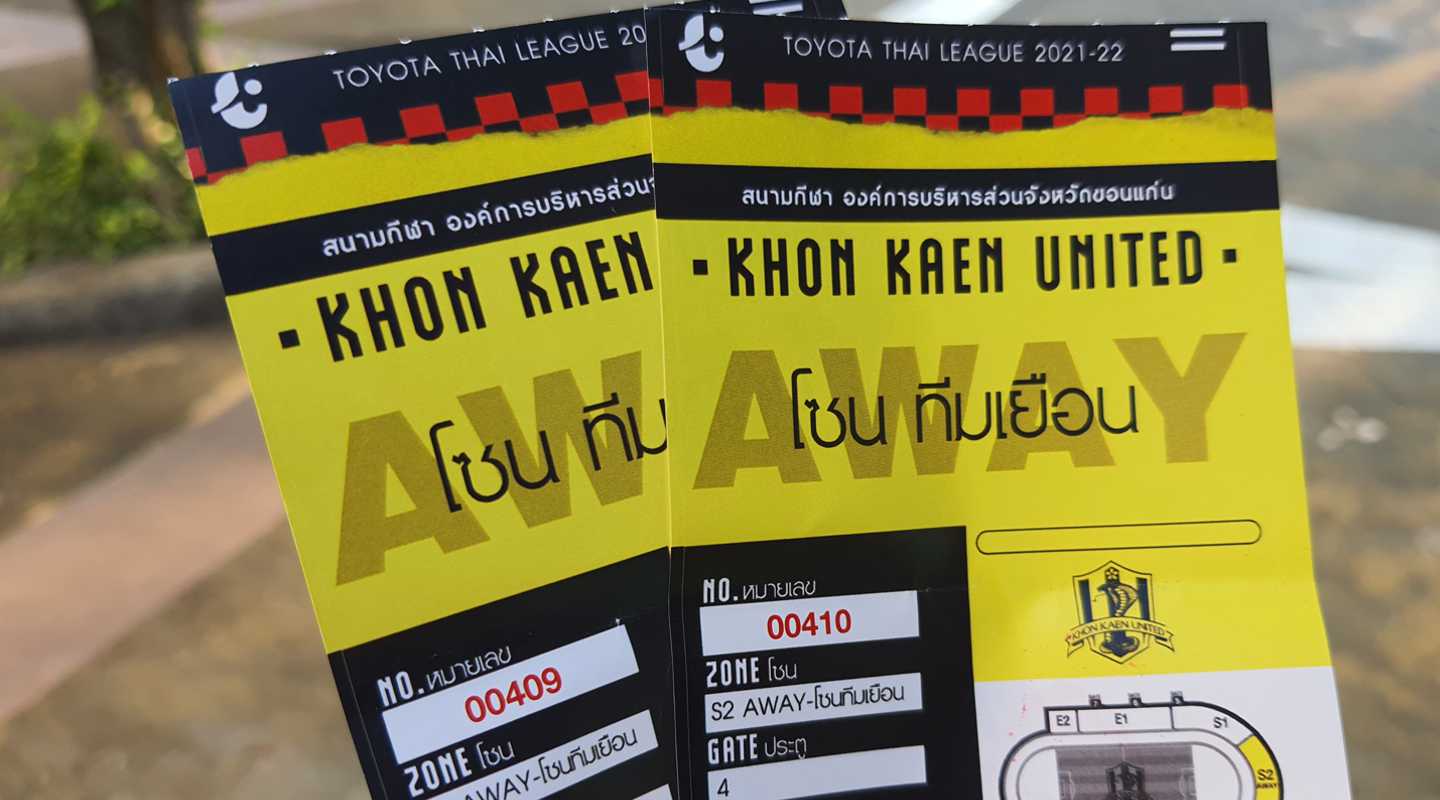 (Away tickets the usual 200 baht - the most expensive seats in the stadium, but far from the best view)

To the match itself. Samut Prakan line-up?

Chaiyawat Buran was a noticeable absentee from the back four but nice to see Yuto Ono on the substitute's bench and presumably getting back to full fitness.

They clearly love their football in this part of the world and a healthy and noisy 3,000-plus crowd created an almost intimidating atmosphere by Thai League standards.

Khon Kaen dominated the opening quarter of an hour with a nervy Samut Prakan barely venturing into the opposing half. It was inevitable that Ibson Melo would have a sizeable part to play in the proceedings and the Brazilian striker was already looking a different class. His 15th minute strike would prove priceless as he goes on a twisting run into the box, sees his intial shot blocked by Pathiwat in the Samut Prakan goal but makes no mistake with the rebound. In a gesture of apology, he immediately raises two hands to the travelling support.

The home side should have doubled their lead on 23 minutes. Noppon Ponkham is shown a yellow card for a clumsy foul just outside the penalty area and the floated free kick presents Filipino striker Joshua Grommen with a gift-wrapped chance to open his Khon Kaen account but he somehow heads over the bar.

Samut Prakan's only half-chance of note in a dreary and forgettable first half was a wayward shot from Daisuke Sakai. 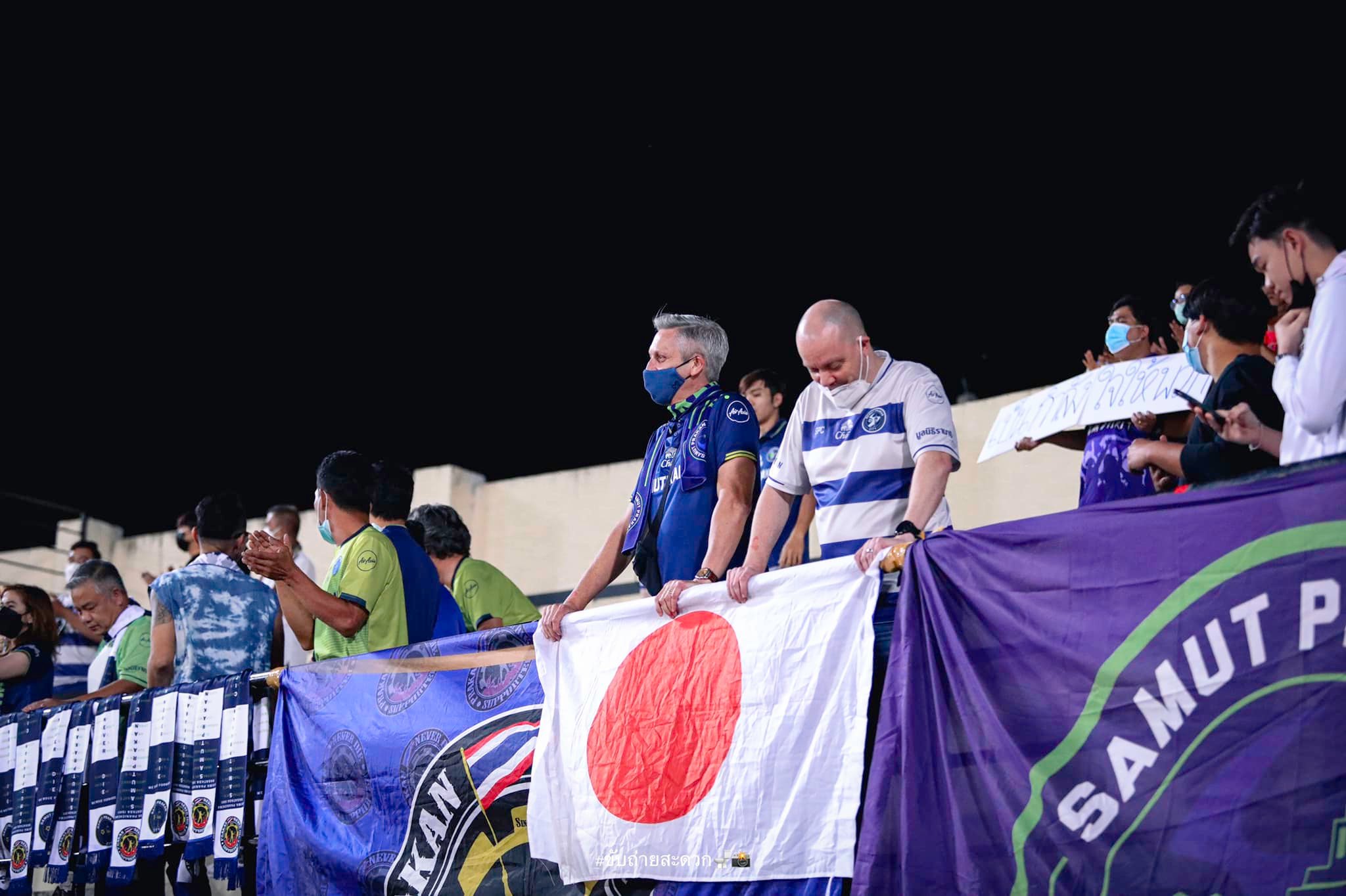 (Me and Sheffield Jon doing our best to remain upbeat)

As has been the pattern of play in a number of Samut Prakan's recent games, a woeful first period has been followed by a much better second. Within the opening five minutes, Saksit has headed at the keeper and Eliandro's wasted cross has the away fans moaning and groaning - but this is better stuff from the visitors in blue.

Islame goes close for Khon Kaen as he finds his shooting angle well closed down by Pathiwat. At the other end, another chance goes begging for Samut Prakan as Aris Jarifovic decides to play a more attacking role and sees his powerful shot cannon off a defender on the line.

There might just be time for a Samut Prakan equaliser in the script when Patsaphon, a second half substitute, is brought down in the box with just nine minutes left on the clock. VAR decides it's a penalty and Eliandro decides to side-foot the spot-kick straight at the keeper for a comfortable save. Eliandro kicks the post in sheer frustration. Nothing's going right for the big man at the moment.

OK, let's take stock. We're now just one place above the relegation zone and four points separate us and the bottom three clubs (it could be fewer than four points after Sunday's games) - and we're also without a manager. We are not in a good place at the moment.

As luck would have it, Sunday lunchtime and Tun and I bumped into the Samut Prakan team at Khon Kaen Airport as we waited for our respective flights back to Bangkok. It gave me the chance to grab a lengthy chat with Aris Jarifovic, once again voted our man of the match. I can only echo Aris's thoughts - the frustration of getting beaten by teams who are no better than us and the serious need to draft in some experienced players who can turn this run of poor results around. I get the impression the mid-season break couldn't have come at a better time. Let's start by getting a new manager in as well as hopefully a few new players! 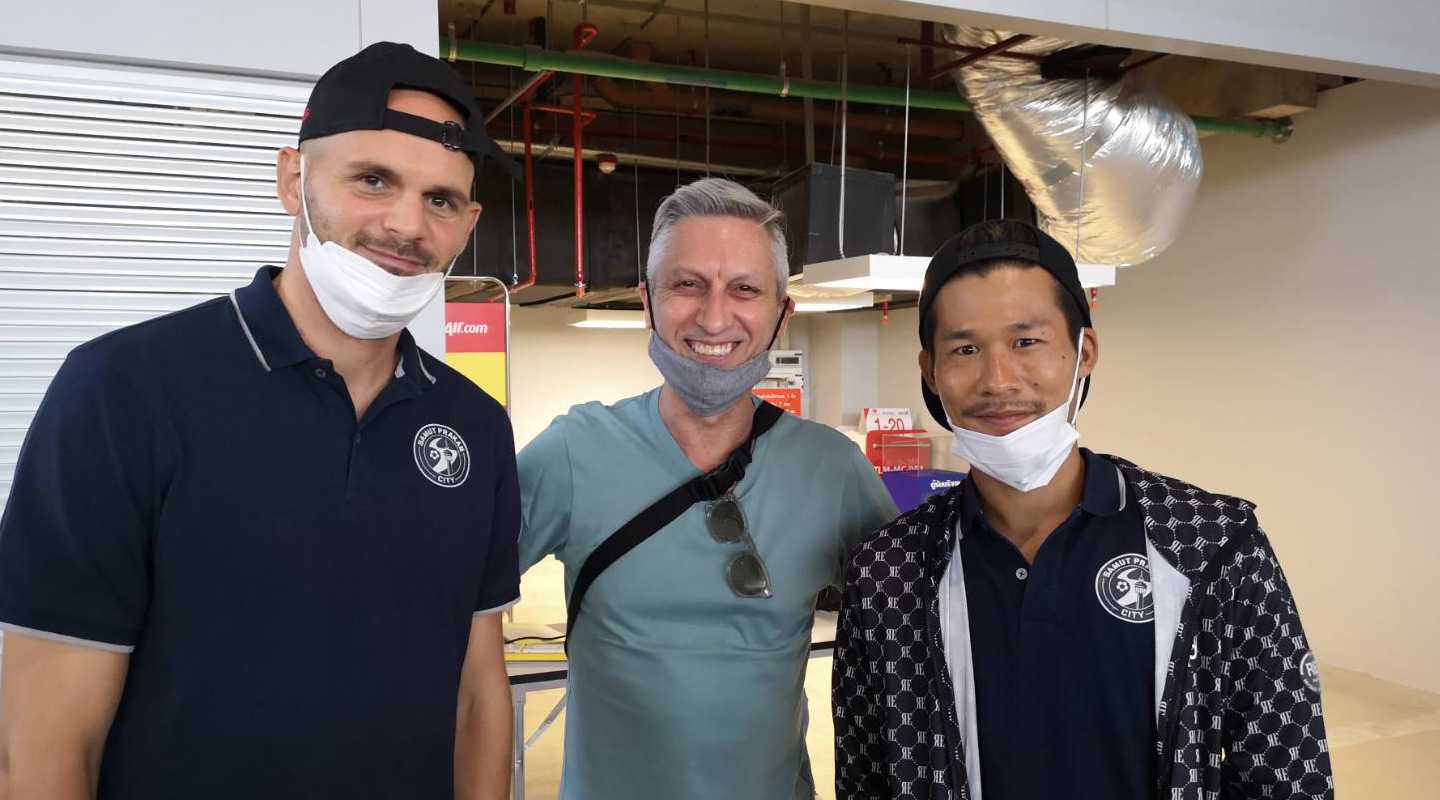 (With Aris Jarifovic and Yuto Ono at Khon Kaen Airport)

There is now a whopping six-week international break before our next match at home to Nongbua Pichaya on either the 8th or 9th of January. Time to forget Thai football for a while and do some travelling methinks. See you in 2022!