(Work commitments mean Tun won't be with me tonight so it could be a solo schlep across Bangkok to BG Pathum's Leo Stadium. Photo: Paiboon James)

Away to BG Pathum United. This is a tough one?

I would say it's arguably our most difficult game of the season so far, given the form that The Rabbits are in. 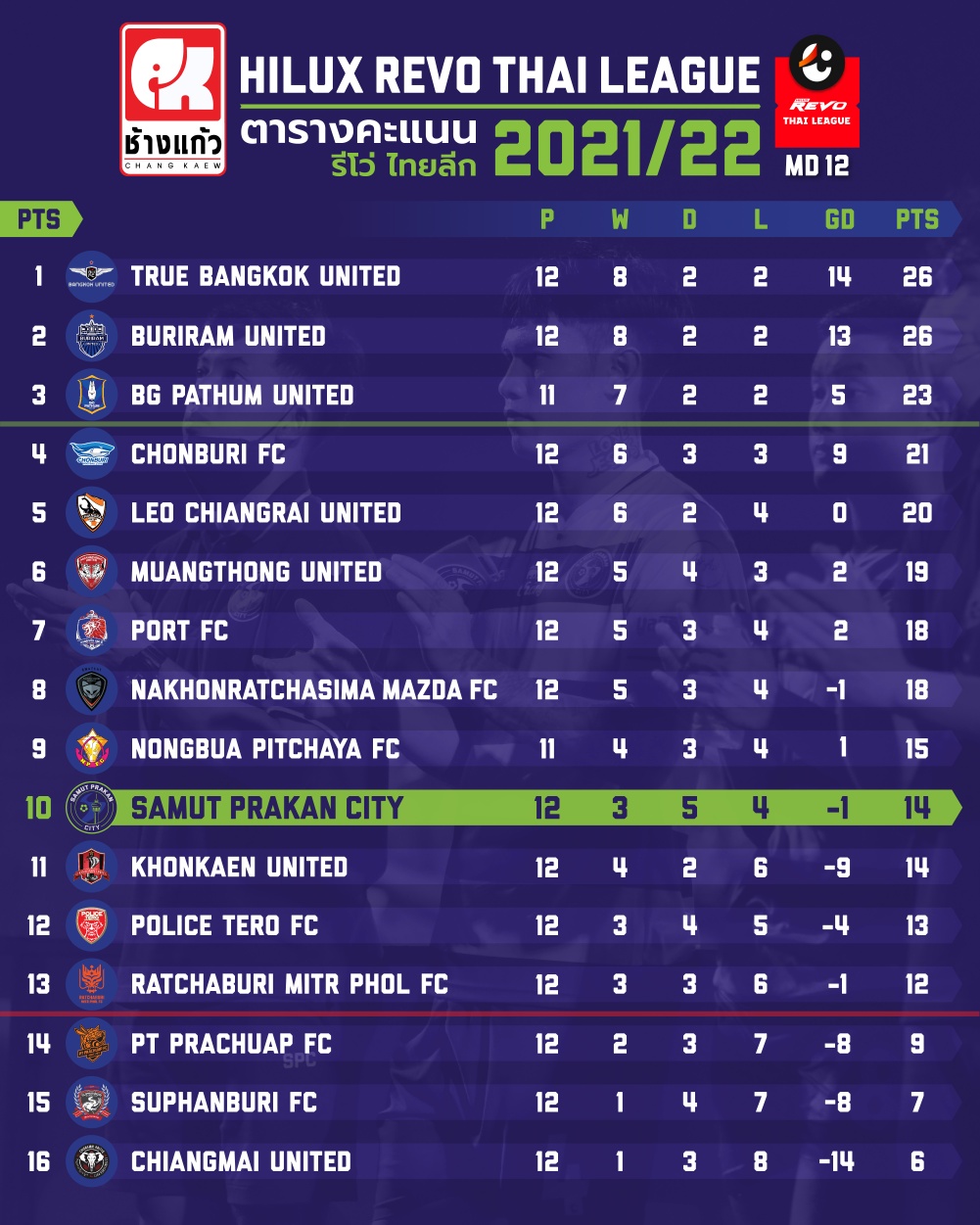 (The league table as it stood before the weekend games. Chiang Mai United and Suphanburi starting to get cut adrift at the bottom. Samut Prakan with a 5-point buffer)

The reigning champions have got their eye on a second successive title?

Absolutely! BG Pathum are currently in third place but could go joint top of the pile with their game in hand. After a somewhat shaky start to the season, losing a couple of home games to Chiang Rai and Police Tero, The Rabbits went on a run of six straight wins, coinciding with star players like Andres Tunez coming back from injury. That winning run was halted in a goalless draw at Nakhon Ratchisima on Wednesday, but it was still a good point away from home against a very in-form side.

BG were only promoted to the top tier last season, meaning the two clubs have met just twice in competitive league action. On a rainy night in October 2020, a battling Samut Prakan performance earned them a 2-2 draw at the Leo Stadium, despite being down to ten men for much of the game. The return game at Samut Prakan in February of this year is one best forgotten. A 6-0 thumping and a match where we well and truly got our arses kicked by the champions elect. 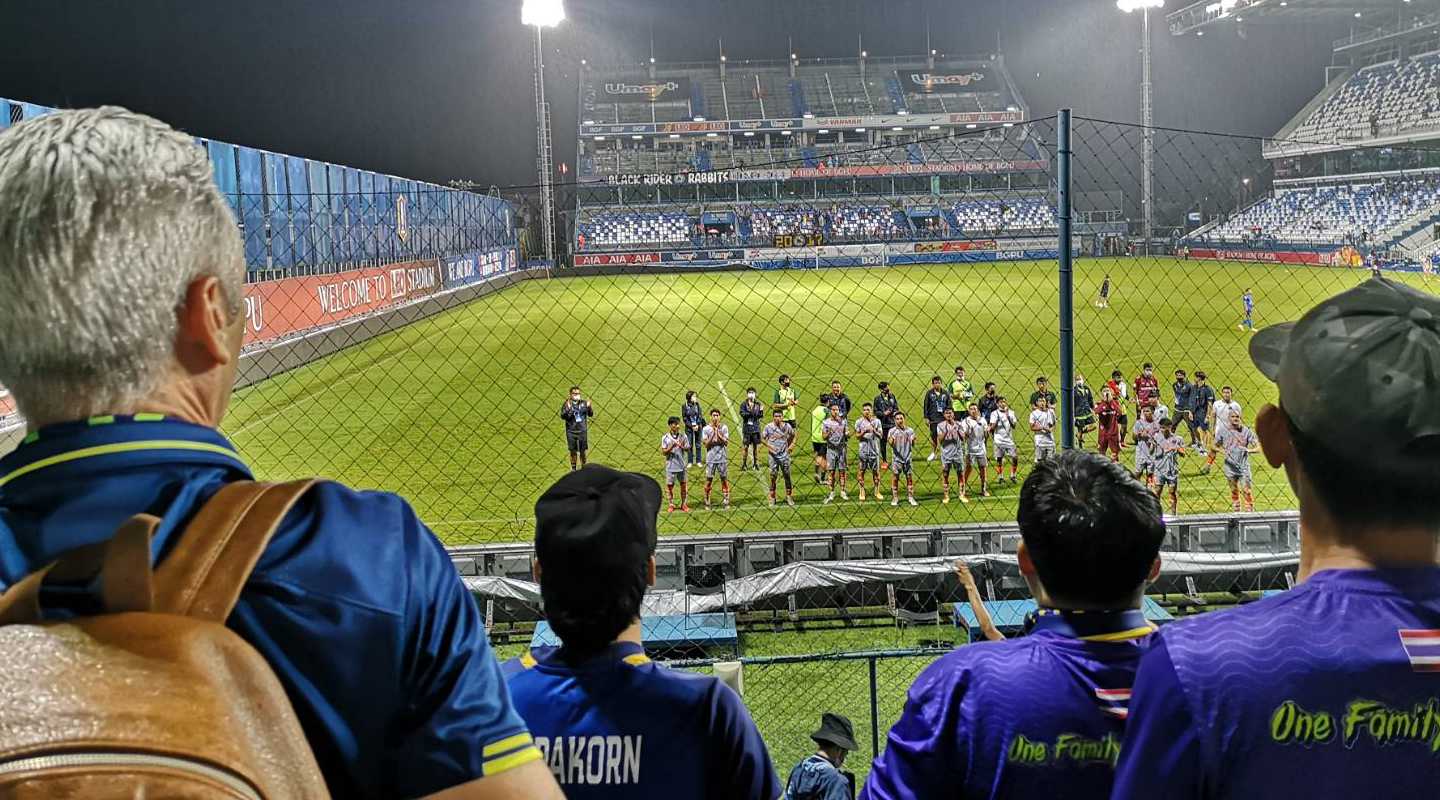 If you were to ask any Samut Prakan fan who our two standout defenders were last season, there's a fair chance the answer would be Ernesto Phumipan and Jakkapan Praisuwan, yet both players were allowed to depart for BG Pathum during the summer.

It's fair to say their new club careers have gone in startlingly different directions. Due to injuries and a handful of below-par performances in the Asian Champions League, Ernesto has found himself frozen out of BG's league games and seen a total of just 35 minutes first team action. At Samut Prakan home and away games, I often used to sit near Ernesto's Spanish father and his Thai mother and although we never engaged in conversation, we were always on friendly nodding terms. You could certainly sense what proud parents they were so I feel sorry for them not getting the chance to see their son play.

Jakkapan, on the other hand, has settled in nicely and started nine of BG's league matches, but is currently out of action with a broken forearm. So it looks like Samut Prakan fans won't get the chance to greet a couple of old favourites this evening.

Sorry folks but I can only see a BG Pathum win in this one. It's just not a game I would expect to get anything from anyway. As long as we put up a decent performance, I'll be happy. Upcoming matches against the likes of Suphanburi and Khon Kaen (both below us in the league table) are far more important at this stage.

Fair play to BG Pathum for making away zone tickets available for purchase via their website a couple of days in advance, but Samut Prakan fans also had the option to buy tickets at the stadium.

My Samut Prakan supporter friend Sheffield Jon and his wife very graciously offered to pick me up for the game and even with the usual heavy traffic around the Leo Stadium, we got there about an hour before kick off. The vaccine and ticket checks were conducted quickly and professionally and it was good to see a selection of drinks and snacks on offer at a kiosk under the away stand. You couldn't buy them with cash though, so I had to rely on other fans to do the bank transfer / QR code thing. I really need to get with the program!

As we selected our seats among the travelling Samut Prakan support and took in the superb high vantage position, I was reminded what a wonderful place the Leo Stadium is to watch football. If only all Thai league match day experiences could be like this one! 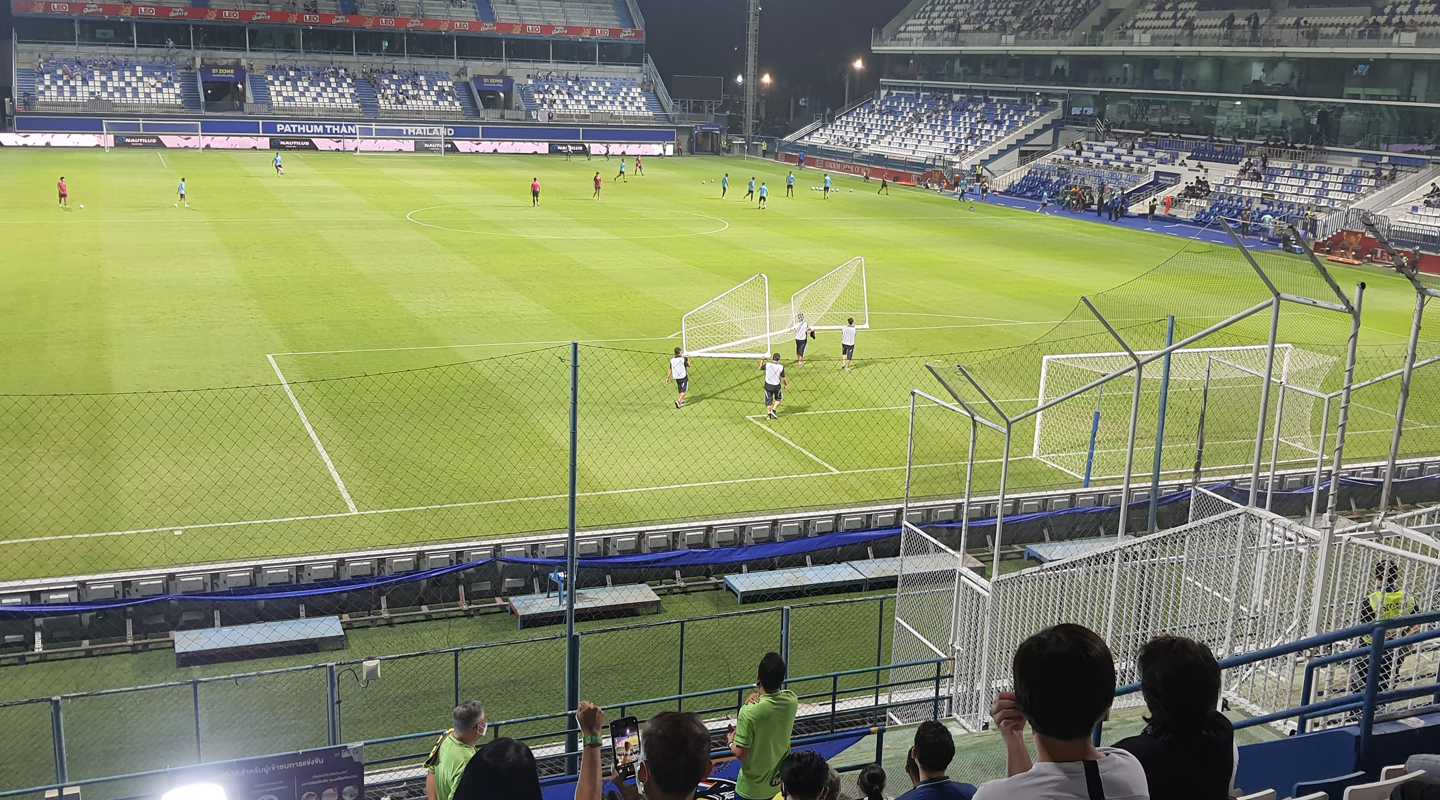 (Thai fans say The Leo Stadium is the best place to watch football in the Thai League. I wouldn't argue with that. It is superb!)

For possibly the first time this season, Manager Ishii dispensed with a 4-4-2 formation and played a five-man back line. Samut Prakan were without their dynamic Japanese midfield duo of Yuto Ono and Daisuke Sakai and Captain Chayawat remained on the sidelines with a hamstring problem (we need those three back as fast as possible)

Samut Prakan, wearing their day-glo green away strip, started brightly with Eliandro shooting over the crossbar with just four minutes on the clock. BG Pathum midfielders Santhiparp and Chaowat both had chances as the home side started to grow into the contest but goalkeeper Pathiwat, now probably the first name on the Samut Prakan team sheet, saved comfortably.

The game springs to life in the 37th minute with the home side on the front foot. A free kick is headed into safety but BG's Brazilian defender Victor Cardoza feels there's been an infringement in the penalty area and he certainly isn't slow in letting the ref know his feelings. VAR confirms that his shirt was pulled by Samut Prakan's Noppon Ponkam and Cardoza himself steps up to dispatch the spot kick. 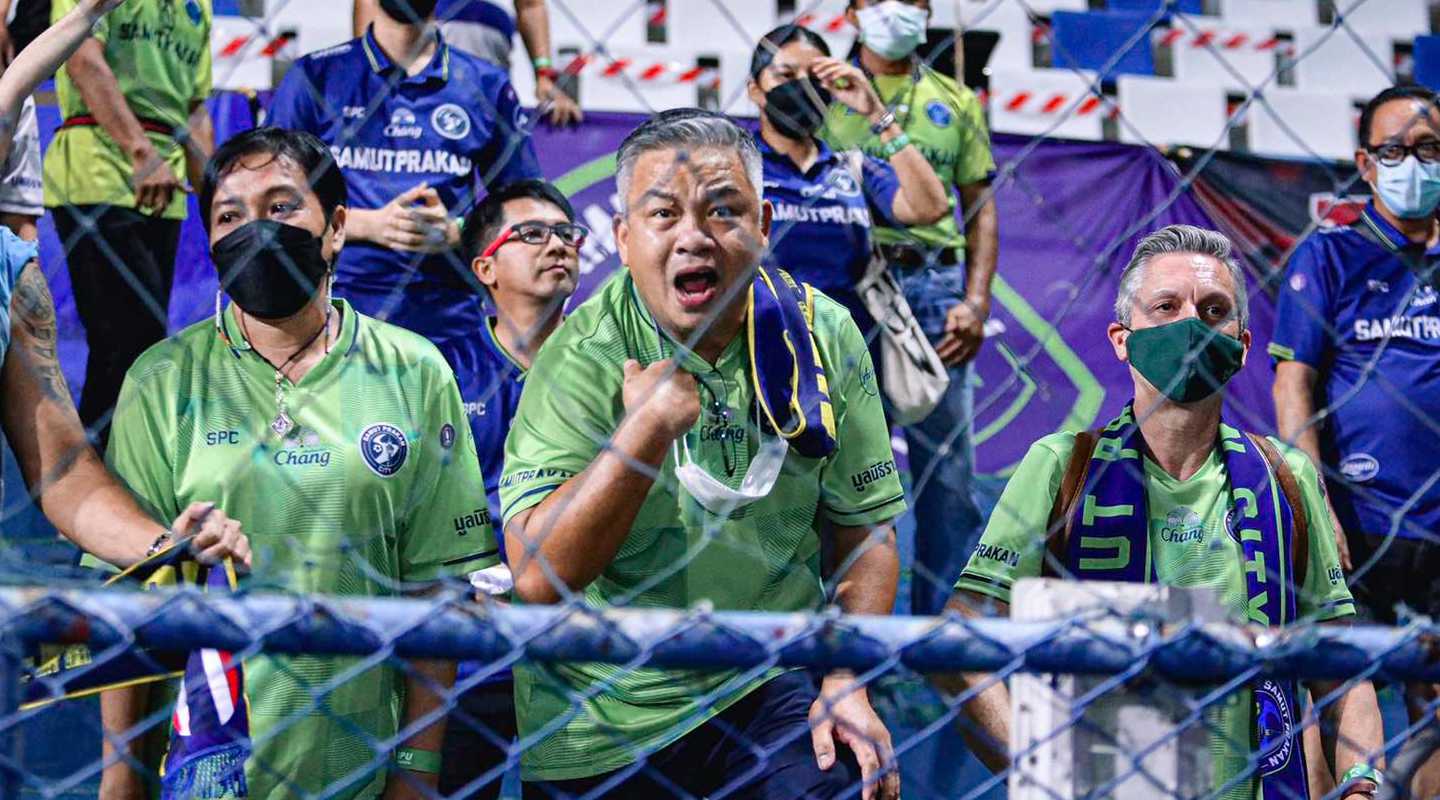 A friend tweeted me after the match to say he thought Samut Prakan were the better team in the second period and I'd be inclined to agree. But for all the away team's excellent approach play, a couple of half shots straight at the keeper and Bureerat getting the ball tangled between his feet as a goalscoring chance beckons, is all we have. We're feeding off scraps and that's unfortunate because Teerasil's header over the bar on 65 minutes is BG's only response of note.

In the final minutes, Samut Prakan almost grab a lifeline with a VAR check for a penalty (strangely this wasn't shown on the TV highlights) but the decision is no. The ref blows the whistle to end the game and incensed Samut Prakan players surround him to demand why more injury time hasn't been played to compensate for the lengthy VAR check. Players point at imaginary watches; Eliandro just boots the ball high in the air and walks off. It brings the evening's entertainment to a rather unsavoury end.

(Oh no, Daisuke Sakai is out! Photo: the official Samut Prakan Facebook page)

This was a game between one side riding the crest of a wave and another side struggling in the bottom half of the table, yet there was very little to choose between them. The problem is it feels like I'm saying the same thing after every match but we're just not picking up points. Some of Samut Prakan's midfield passing play tonight was a joy to watch and the defence coped admirably with what BG threw at them; the problem is in the final third. Where are the goals coming from? Not wishing to lay the blame on one particular player but that's just three in 13 league matches for Eliandro.

Thankfully, the teams below us aren't capitalizing on our barren spell and that five-point buffer remains.

Finally, a big thumbs up to the staff and the organisation at the Leo Stadium for showing away fans especially what a Thai match day experience should be like. And bonus points for ex-Samut Prakan legend Jakkapan for making the effort to come over and applaud the away fans at the end and enjoy some good-natured banter.