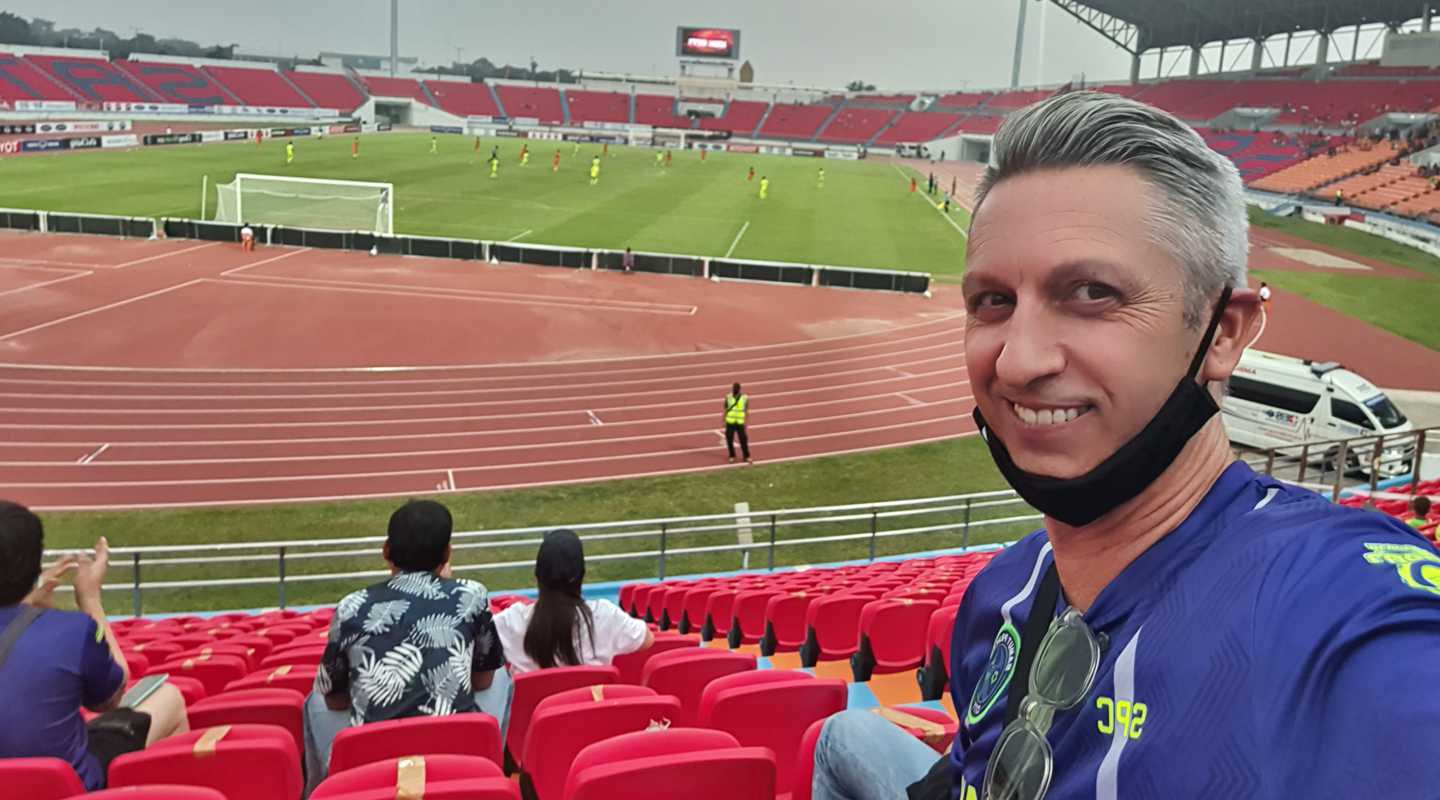 Memories of a great trip to Nakhon Ratchisima back in November last year to see us win in the FA Cup. But for the league game tonight, it'll be behind closed doors.

And first the good news!

From this weekend (February 27/28) fans will once more be allowed to attend football matches as more Co-vid restrictions are lifted. The number of fans will be limited to either 25% or 50% of the stadium capacity (more than enough for Samut Prakan at the moment) That's fantastic news because there is still a whole month of the season remaining and we have four away trips to Suphanburi, Sukhothai, Chonburi and Chiang Rai.

Before we get on to Nakhon Ratchisima away, what's happened since the last blog?

We played PT Prachuap at home on Sunday, with Samut Prakan 8th in the league and Prahuap 11th. A win could take us into the top four if other results went our way.

Although the Killer Wasp were only three points above the relegation zone, they'd shown considerable improvement in recent games and were beginning to look like a team well capable of avoiding the drop.

They arrived at Bang Plee having won three of their previous four matches (beating Chonburi, Suphanburi and Chiang Rai). Although I was confident of a victory, Prachuap certainly weren't to be underestimated.

Aris Jarifovic and Daniel Toti were both absent through injury so in came Saksit Jitvijan and midfielder, Apichai Munotsa, to make his Samut Prakan debut - and what an impact the young man made! Just four minutes into the game, he gets on the end of a pull back from Suphanan and rams it home with the confidence of a veteran striker. By the look on his face, even he can't quite believe he's on the scoresheet so early.

As we approach the midway point, Samut Prakan are looking comfortable, We're content to just pass it around in midfield and wait for the chance of a counter attack - or a gift. The Prachuap keeper and his right back get in a right old muddle with a simple goal-kick and Teerapol Yoyei seizes the opportunity, brushes the defender aside and squares it to Tardeli, who lashes home his 17th of the season.

Prakan 2-0 up but a long way to go. That said, Prachuap are offering nothing; they look a poor side. Star man, William Enrique has caused us problems in the past (in his Chiang Rai days), but he's cutting a frustrated figure this evening.

The killer third goal comes early in the second half, courtesy of a trademark Prakan counter attack. Tardeli latches on to a glorious through ball from Suphanan and provides the cool finish of a striker in the form of his life.

With the game now won, manager Ishii-san sees the chance to give some inexperienced subs a taste of the action. The young fringe players come on and do their bit; everyone looks to be relishing being a part of this squad.

Tardelli completes his hat-trick in the 82nd minute with a header into the bottom corner (Suphanan's third assist of the evening) and although Prachuap hit the woodwork twice in the second period and force Pathiwat into several smart saves, that really wasn't the story of this match. As a team unit, that's as well as I've seen Samut Prakan play, and we were superior to our visitors in every aspect of the game. It was just another wonderful team performance! (watch the match highlights)

Oh, and thanks to superior goal difference, we are now 4th in the league. A quite remarkable achievement. 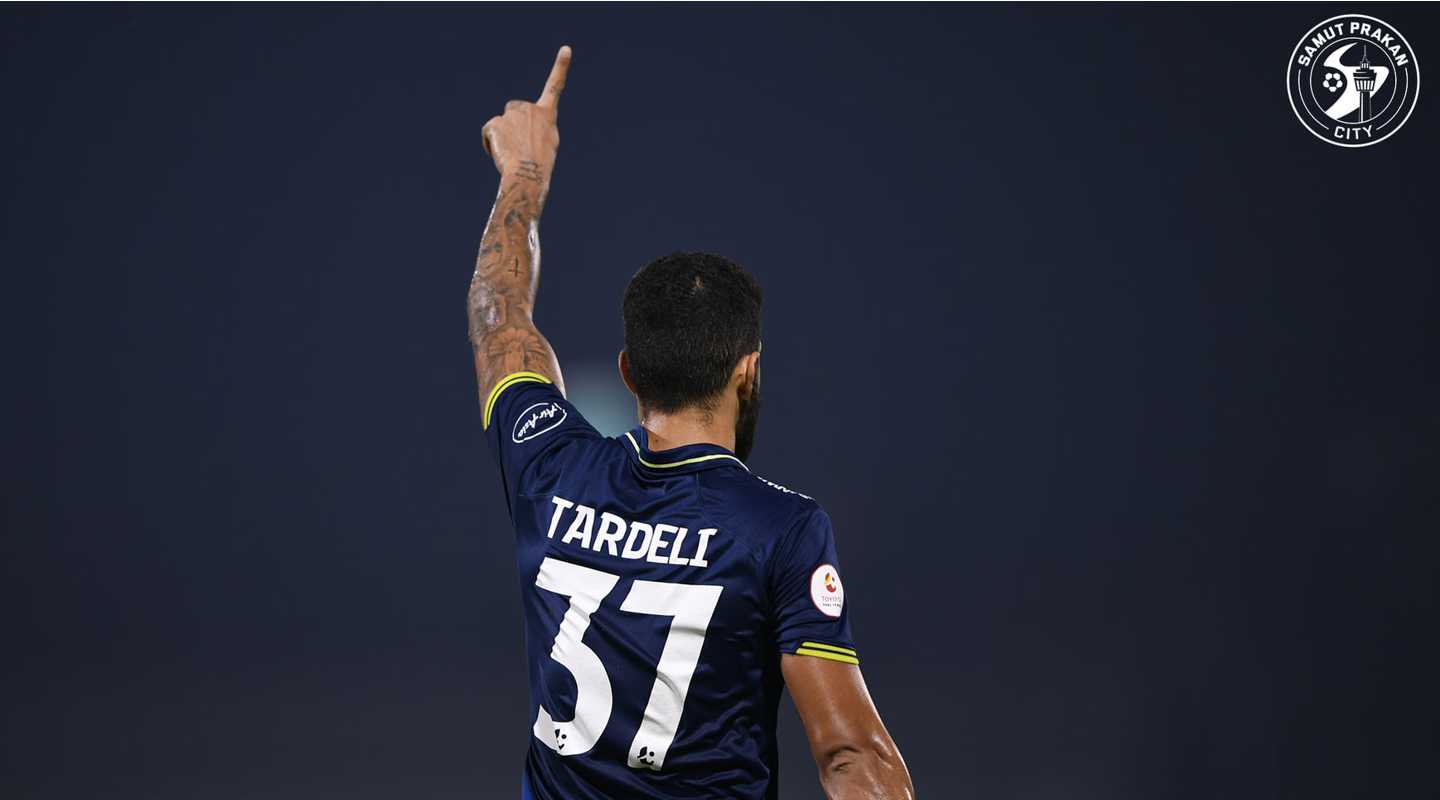 Let's get on to today's match against Nakhon Ratchisima. This is a side in great form?

They are unbeaten in eight games. You've got to go back to the 27th November for their last defeat (a 0-2 home reverse against BG Pathum) Since then, they've been on a run of six straight victories followed by a couple of draws against Chiang Rai and Sukhothai. It's been a remarkable contrast to their early season form, where they won just one of their opening eight fixtures and began to look like favourites for the drop..

What was the score in this fixture last season?

The Swatcats battered us 4-1 in a game I would rather forget. Although Ibson Melo put Samut Prakan a goal up in the second half, the home side hit four in the last 20 minutes and a final scoreline of 4-1 didn't flatter them at all.

OK, on to this evening's action

Manager Ishii-san named the same starting line-up as Sunday, with still no sign of Toti returning; however, Aris Jarifovic did make the bench.

The first quarter of an hour belonged to The Swatcats. As early as the second minute, Nakhon Ratchisima's 13-goal striker, Dennis Murillo, almost capitalized on a Jakkapan error but his lob failed to clear Pathiwat's outstretched fingers.

Samut Prakan were then forced into an early change as the injured and slightly dazed-looking Yuto Ono was replaced by Noppon Phonkam, who enjoyed an excellent 20-minute cameo in midfield on Sunday.

As the half wore on, chances became few and far between. If the deadlock was to be broken, top scorer Tardelli was Samut Prakan's most likely, one rasping drive producing a terrific save from the NR keeper.

NR seemed a different team after the break. The intensity level compared to their first half performance dropped noticeably and you wondered if perhaps they were satisfied with a point. Are two matches a week beginning to catch up with players because an awful lot of them looked 'leggy' out there this evening. And that went for both sides.

Samut Prakan dominated the second half but for all their possession just couldn't create any chances. NR offered almost nothing apart from a brief flurry of corners and goalmouth scrambles in the dying minutes.

Captain Peeradol was subsituted late in the game to cap one of the most off-colour displays I've seen him have in a Samut Prakan shirt, but he wasn't alone. A number of our 'star players' weren't really at the races this evening.

Nil-nil it ended and a point each was probably a fair result. A result that both teams will take but neither side really wanted. It certainly wasn't a classic; perhaps a case of two in-form sides cancelling each other out.

Those two games pretty much went to script. A comfortable 4-0 win at home to a poor PT Prachuap, followed by a battling point against a Nakhon Ratchisima unbeaten in their last eight. We have to be reasonably satisfied with that.

We take on runaway league leaders BG Pathum at home on Sunday (28th February) All being well, I'll be back in my usual seat in the W2 zone.