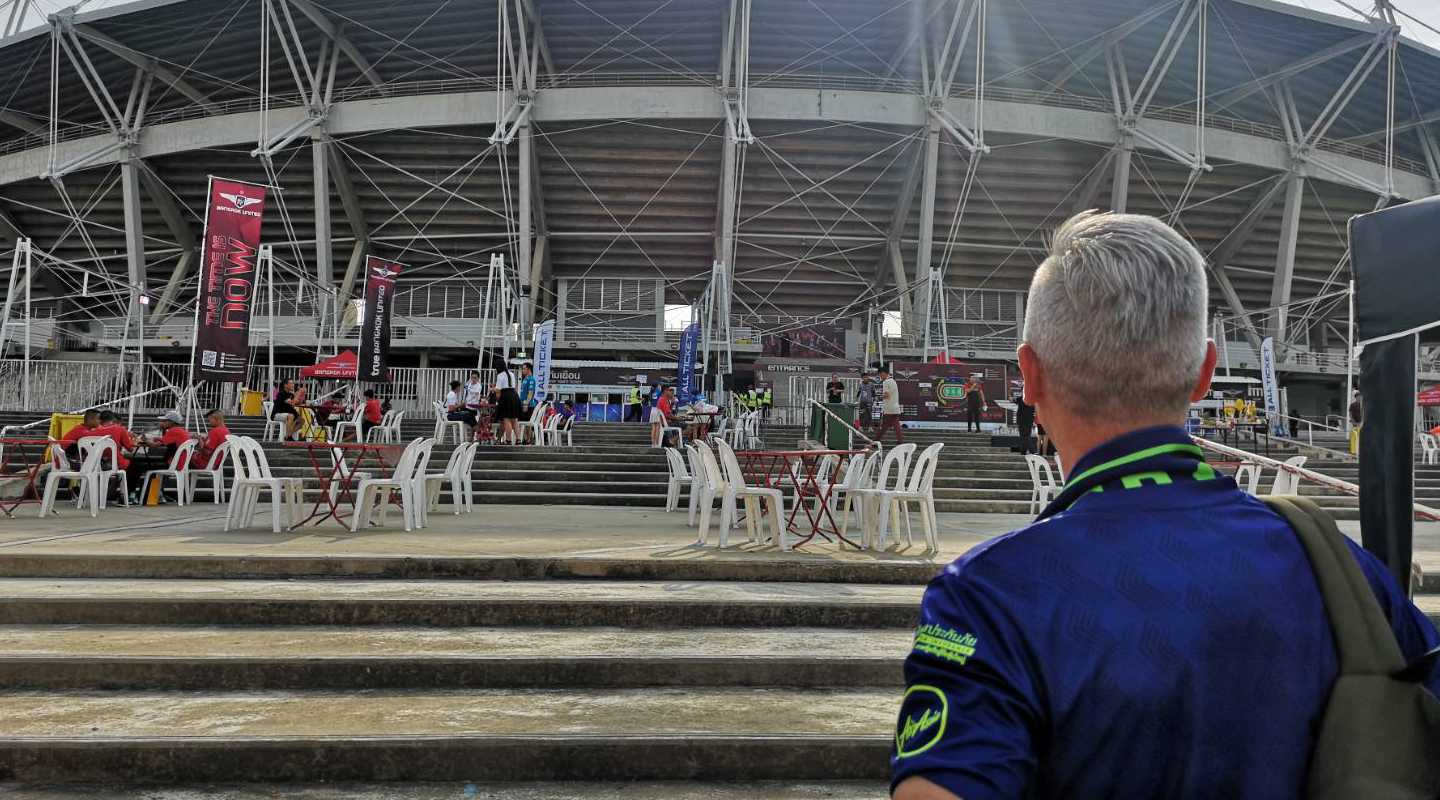 Away to third place Bangkok United then. Tough?

I'm not expecting to come away with anything from this one. On our previous two visits to Bangkok United's Thammasat Stadium, we were beaten 2-1 in 2019 (a scoreline that frankly flattered us) and last season in a behind-closed-doors game, we were walloped three-nil and were lucky to get nil. It certainly isn't a good ground for us and the fact Bangkok United are so high in the league makes the task seem even more daunting. But let's give it a go, eh?

Played 7, won 5 and drawn 2. Only Port and Nongbua Pitchaya have come away with a point. Their five home wins have included a 5-0 thumping of close neighbors Police Tero.

A month or so ago, Bangkok United were top of the league. However, due to Covid outbreaks and lord knows what else, their last four league games have all been away from home and they've taken just one point from those four matches. There was a shock 2-0 reverse at Suphanburi and a couple of one-nil defeats at Buriram and Nongbua, with the solitary point coming care of a 1-1 draw at Port.

They have slipped to third in the table, eight points behind leaders Buriram. And eight points is an enormous gap when you're chasing Buriram.

Who's been banging in the goals?

The strike pairing of Heberty and Vander Luis have hit the net fifteen times between them. The Brazilian Heberty has been around the Thai League since 2017 and has always been a goal-every-two-games striker. Vander Luis has returned a far more more modest goalscoring ratio since he debuted for Chiang Rai in the same year (2017) - but he's still a danger man. 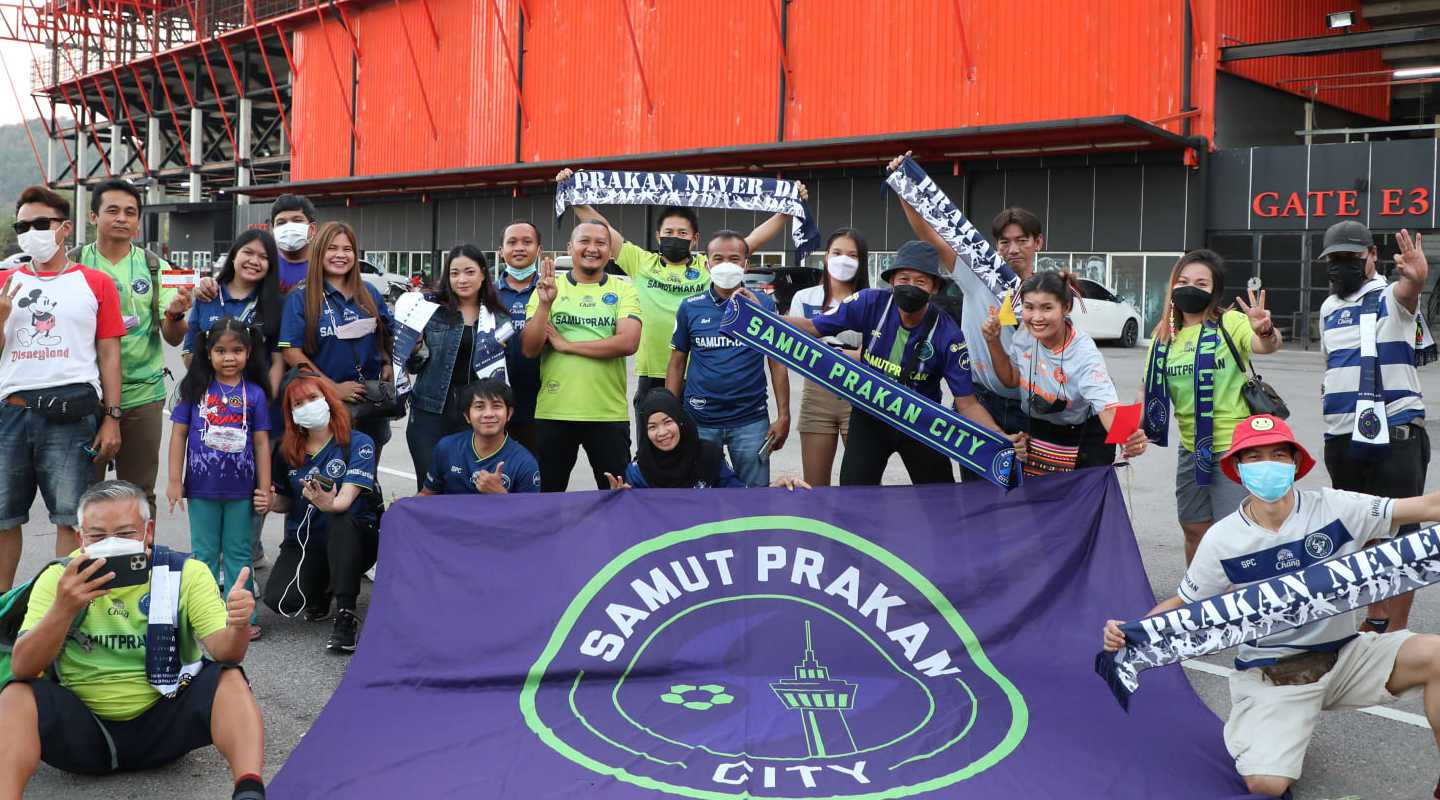 (We had some great away support at Ratchaburi last Sunday. Can we hope for the same tonight? Photo: Official Samut Prakan Facebook page)

Much to the annoyance of their fans, Bangkok United were one of the last premier league clubs to allow supporters back into the stadium, with reasons never quite made clear. However, they are back in now.

I'm not sure whether the allowance is 25% or 50% of the capacity but it really doesn't matter. The enormous Thammasat Stadium holds 25,000 people but there were less than 2,500 for the last home game against Muangthong. 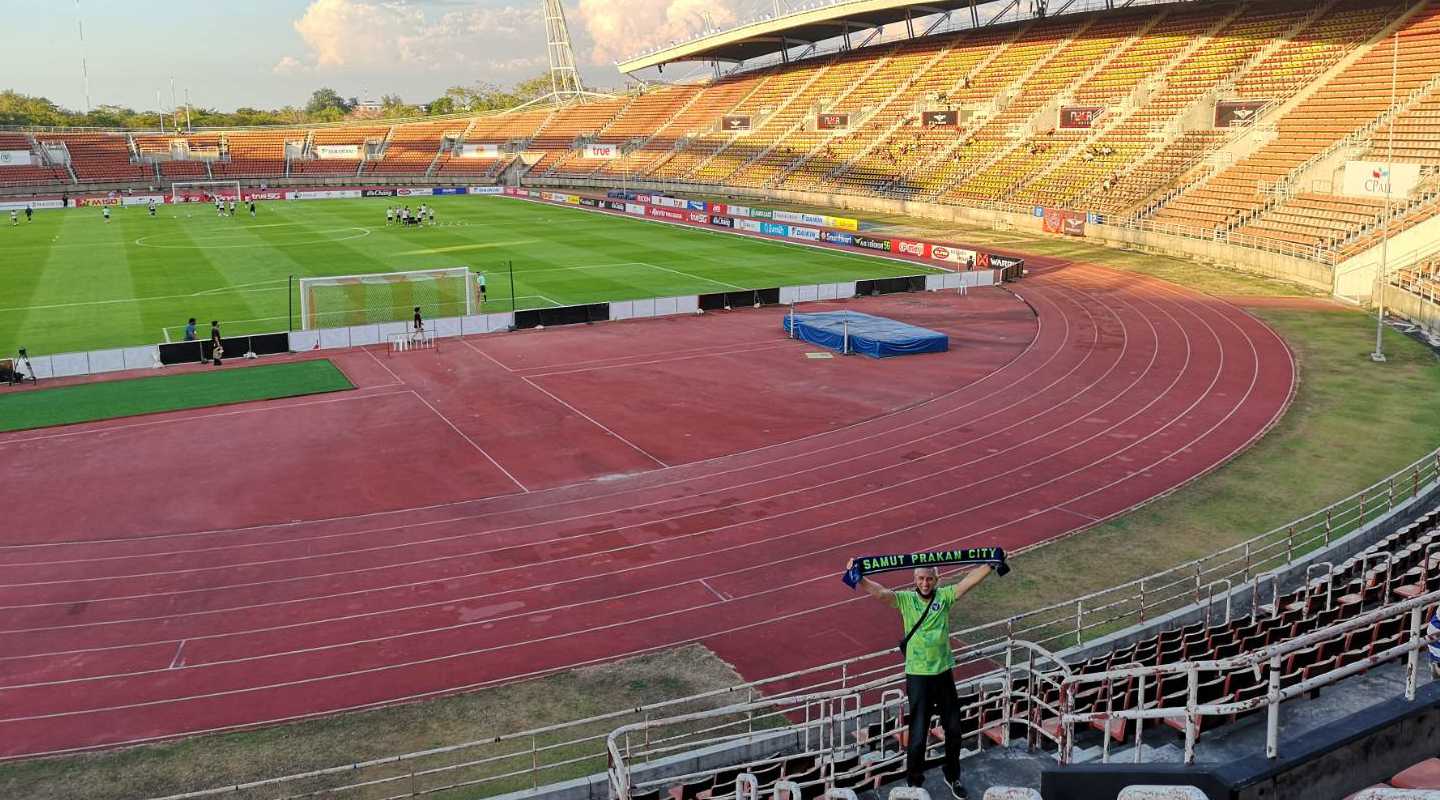 With its weathered and broken plastic seats, huge running track and ridiculously distant pitch, I've seen a game at Thammasat described many times on social media as 'the worst away experience in Thai football'. Tonight was even worse than usual. Bangkok United is a football club clearly petrified of Covid. Huge sections of the stadium concourse were blocked off with red and white tape, there was little in the way of refreshment vendors, and at times it felt like there were two security staff for every fan. It was utterly miserable.

Little wonder given Bangkok United's recent poor form and the heavy-handed restrictions that only 847 turned up for the evening's entertainment. As one BU fan told me 'it's just too far to schlep out to Thammasat for a Wednesday evening kick off when you live and work in the city, as many fans do'

To the match itself?

Samut Prakan welcomed back Chaiyawat Buran after suspension to give us some added bite in defence and the visitors started well with Captain Chayawat seeing a long range shot fly over the crossbar and a header rattle the woodwork. For Bangkok United, Vander Luis and Heberty looked lively and it was the latter who broke the deadlock on twenty minutes with a beautifully executed curler into the top corner. Samut Prakan's Daisue Sakai stings Warut's hands with a rasping drive and Kevin Ingreso pulls a shot wide as the Sea Fang look to restore parity. Samut Prakan custodian Pathiwat has a right leg to thank for keeping out a shot from Vander Luis. 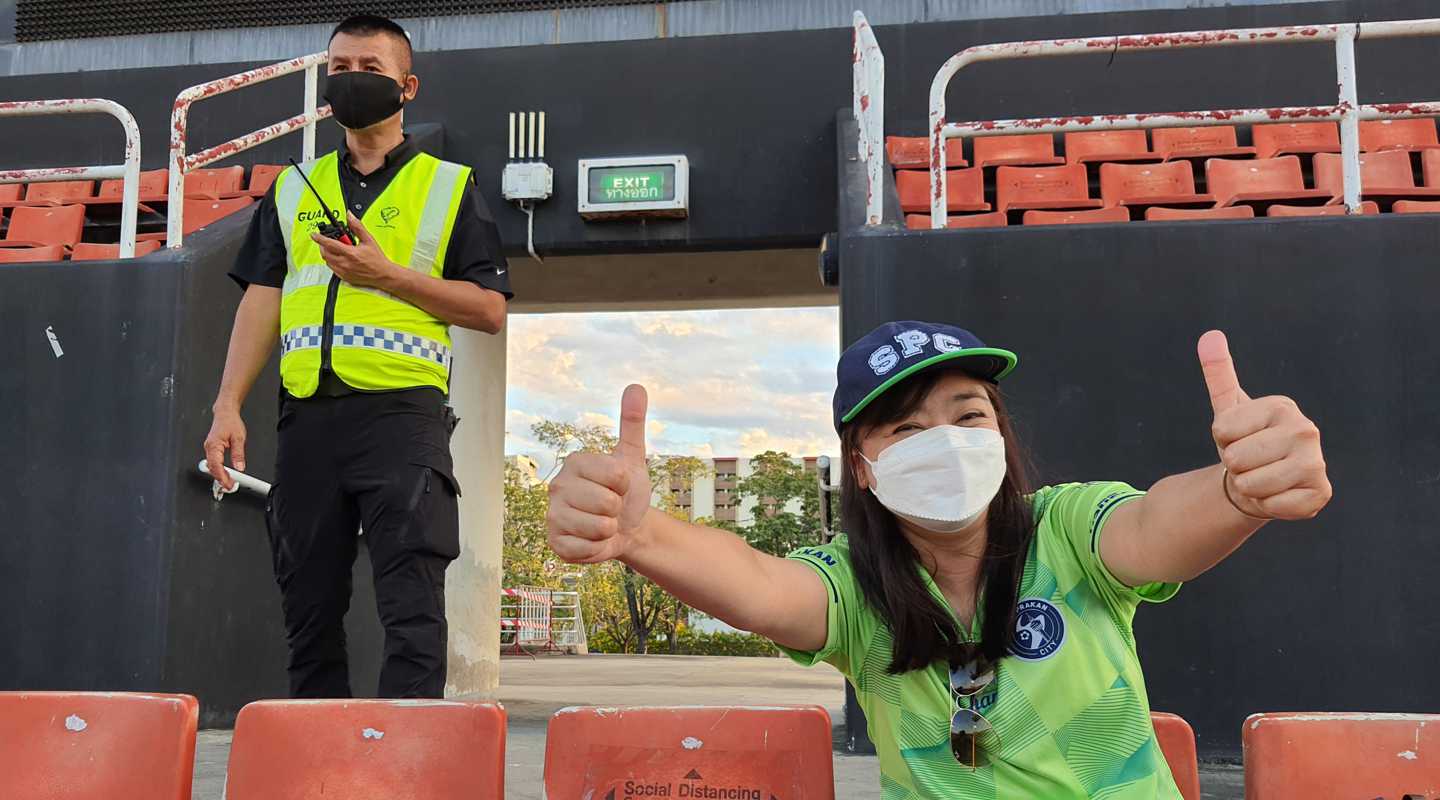 (At times it felt like we had a security guard each)

The foreign and Thai fans in the away enclosure might be speaking different languages but we can all agree on where it's going wrong out there on the pitch. Although Samut Prakan were arguably the better side in the second period, the tendency to overplay things in attack meant the game became a frustrating watch and the lack of end product is becoming a grave concern.

Samut Prakan made two changes early in the half; recent signing Chatri Rattanawong replacing Captain Chayawat and Noppon Phonkam on for Yuto Ono. Chatri had several chances to add to his debut goal against Nongbua Pichaya but fluffed his lines. A penalty appeal for handball mid-way through the half was possibly the closest the visitors came to getting back into the match but VAR said no.

Vander Luis's tap-in after some awful defensive work from Jitvijan puts some late gloss on the scoreline for Bangkok United.

To compound a forgettable evening, news filters through that main relegation rivals Suphanburi have picked up three points away at Chiang Mai thanks to a 2-1 win. 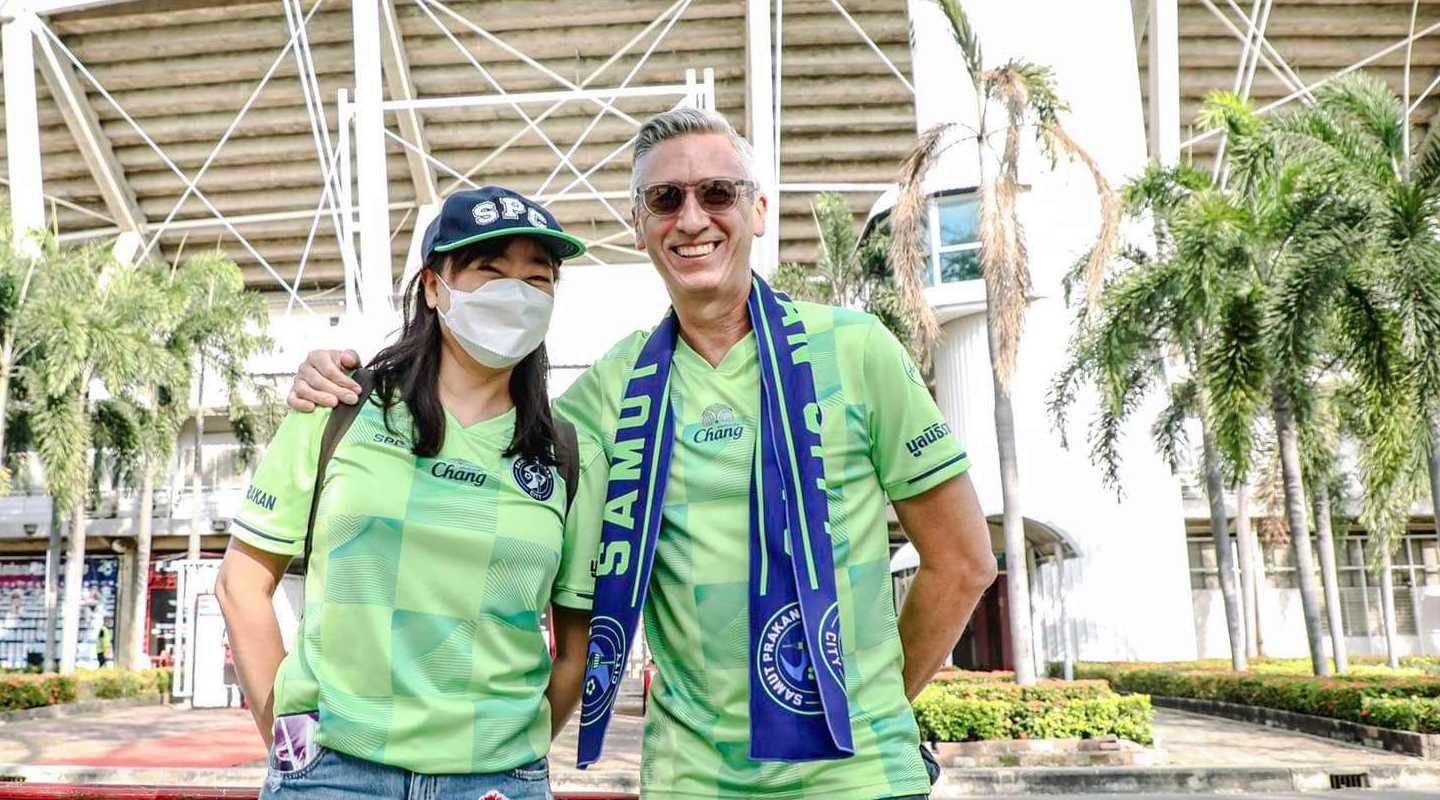 Not the greatest evening I've had as a Samut Prakan fan it must be said. There are those who would argue we were worth a point and I wouldn't disagree, but you have to score goals to win football matches. A lot of our build-up play is admirable and there are times you're left scratching your head as to why we're in such a perilous league position, but yet again we've come away with a big fat zero in the goals scored column.

There's a long way to go in the season. There are still 11 games to play and 33 points to be won. But the teams around us are picking up priceless points and it's all beginning to look very gloomy. It's going to take a considerable effort if Samut Prakan are to extend their stay in Thailand's premier league for a fourth season.

We are away to Chiang Mai United on Sunday 6th February in a relegation six-pointer.

Yes, flight and hotel are already booked and we're looking forward to a few days up north. Let's hope that three points on Sunday give us something to smile about.