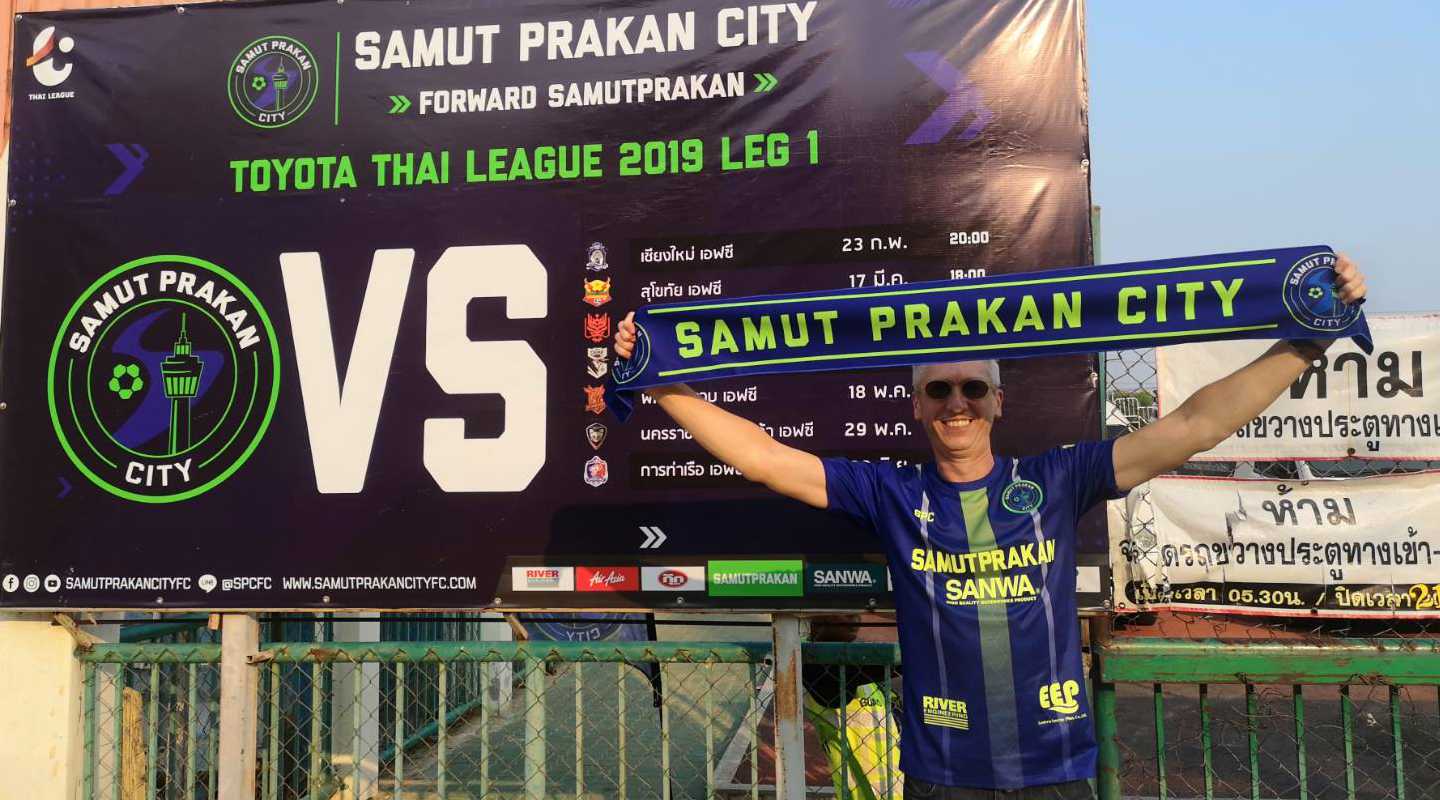 If you had offered me a 6th place finish at the start of the season, as the old saying goes - I would have bitten your hand off. I think most Samut Prakan City supporters would.

However, such were our performances in the first half of the season, that the bar got raised and the expectancy became heightened. Samut Prakan fans dared to dream. Could this little club with the lowest average home attendances in the Thai Premier not only compete with the likes of Buriram and Bangkok United, but go one step further and actually win the damn thing?

A hard-fought opening day win against Chiang Mai gave us our first glimpse of the team and what it was capable of. Three points is three points but no one got too excited. We had only beaten a team that was the bookie's favourites for relegation and a swift return to the second division. There were far tougher tests to come.

But then we put Chonburi to the sword in our first game on the road and fans thought 'hold on, we might be on to something here'

Although March defeats at PTT Rayong and Buriram brought us back down to earth, we continued to take maximum points at home. Results elsewhere constantly went in our favour. None of the big teams could put a run of victories together and It was turning into the Thai Premier League race that no club wanted to win.

A top three side

As the season moved into April, home wins against Chainat and Ratchaburi, combined with solid away draws at Chiang Rai and Trat, kept Samut Prakan comfortably in the top three. We felt like there was nothing to fear and we had a squad of players that was more than capable of maintaining a challenge.  Ibson Melo was banging in the goals but players like Teerapon Yoyei and Jaroensak Wonggorn were turning in consistent performances week in, week out. Performances that would ultimately reward them with call-ups to the Thai international squad.

May started in glorious fashion with a 5-0 FA Cup rout against non-league North Vachilalai Chiang Mai United, followed by arguably our best league performance of the season as we gave the mighty Muangthong United a soccer masterclass in their own backyard.

Out of the cup!

I had been warned by disgruntled and understandably bitter Pattaya United fans on social media that Samut Prakan wouldn't be taking the knockout competitions seriously and we got to witness that first-hand in the Thai League Cup. In an interesting first round match-up against fourth-tier Thonburi University, we put out a weakened side in a game that would eventually go to a bizarre penalty shoot-out that threatened at one stage to keep us there all night. But eventually we were put out of our misery and our interest in the lowest priority cup competition ended just as darkness began to fall.

We then experienced a blip in league form taking only one point from the next couple of games; an uninspiring away defeat at Bangkok United and a share of the spoils at home to a battling Prachuap.

We closed out May with a comfortable 2-0 win at home to Nakhon Ratchisima but the feeling that we had got our season back on track was short-lived and a dark cloud descended over the SAT Stadium in Bang Plee as news filtered through that much-loved and much-respected manager, Surapong Kongthep, had resigned. The news was confirmed the following day - the gaffer was gone along with Tiago Almeida, the brilliant and innovative fitness coach. Fans searched for answers, for reasons - but their departures remain a mystery to this day.

Tetsuya Murayama, Samut Prakan's Japanese technical director, was promoted to the position of manager. His first match was a tidy away win at struggling Suphanburi and that result kick-started a wonderful June. There was an exciting, albeit poorly attended, FA Cup victory against Army United, followed by the night of the season, as in a white-hot atmosphere and in front of a packed house in Bang Plee, Samut Prakan triumphed 2-1 over close neighbors and rivals, Port FC.

A two-all draw at Chiang Mai meant that Murayama had won three and drawn one of his opening four games in charge. Little was known about Murayama's coaching background in Japan but did we have a tactical genius at the helm!

It became five games unbeaten as we completed the double over Chonburi, winning in a manner far more emphatic than the 1-0 scoreline suggested. However, the game will be remembered for all the wrong reasons and I remain adamant that this fixture was the turning point in our season. Captain Peeradon Chamratsamee and goalkeeper Patiwat Khammai, who had enjoyed fine campaigns up to that point, were both stretchered off to waiting ambulances and whisked off to hospital. Patiwat was ruled out for the rest of the season; Peeradol recovered to manage a handful of appearances but was never quite the same player. In their lengthy absence, the whole balance of the team changed and the team's confidence and swagger seemed to nosedive.

It's never nice to see players leave the club because they become rather like family, but we said goodbye to Nopparat Sakun-ood and Korean midfielder, Taeyeon Kim.

Nopparat joined Air Force United in the second division, where he would eventually be a key part in their bid to avoid relegation. I fully understood the popular player's decision to leave because he just wasn't getting the game time that his ability deserved.

Perhaps he left for personal reasons, but I was more disappointed with the departure of Taeyeon Kim. I thought he was a very decent player.

I think the general idea in football is that when a player parts company with the club, you do your utmost to replace them with someone of equal ability.  Samut Prakan didn't. They raided the South Korean transfer market to bring in Hoeyeong Kim and Pyungrae Kim. Both players continue to look every inch the Korean second and third division footballers they once were.

In need of goalkeeping back-up, Kampon Phatomakkaku was signed on loan from Chonburi. When he appeared in the obligatory 'posing with Samut Prakan team scarf' publicity photo, I asked my good friend, Dale Farrington, a loyal Chonburi fan, for his opinion of our new man between-the-sticks. Dale responded with a side-splitting "I'm surprised he hasn't dropped the scarf"  It remains my favourite quote of the 2019 season.

Thankfully I was on vacation in Bali so never got to witness the surprise 3-0 home defeat at the hands of PTT Rayong but any notions that the performance might be just a bump in the road were swept aside as we limply exited the FA Cup round of 16 with a 3-2 loss at second division, Thai Honda.

A 2-1 win at relegation-threatened Sukhothai merely papered over the cracks as then in the space of five days, we were thumped 4-1 at home by Buriram and endured an away day horror show at Ratchaburi, losing 5-2 despite being two goals to the good at half-time.

There was little to cheer in August as it started with a brace of home defeats to Trat and Chiang Rai and a few of us started to question whether Murayama was the right man for the job.

Not for the first time this season, a last-gasp Ibson Melo winner gave us all three points away at Chainat but all the good work was undone with a low-key performance and defeat at Prachuap the following week.

At this point, Samut Prakan had completely lost pace with the league leaders and a top five finish became a far more realistic target.

There were just the two league games in September - a 1-1 draw at home to Bangkok United (I was in England at the time so missed this game and couldn't even get a live feed) and a 4-1 defeat at Nakhon Ratchisima, (which I was able to watch on TV and wished I hadn't)

As a Thai football follower, motivation and enthusiasm can dip alarmingly in the very final month of the season because there are just too many breaks. A 2-1 win at home to Muangthong was our only game over a period of four weeks. Come the home fixture against Suphanburi (a 3-2 loss) it felt bizarrely like starting the season again but with just two matches to play. You get used to these things in Thai football it must be said.

To bring the curtain down on our 2019 campaign, we played out a 2-2 draw against Port FC in a meaningless, nothing-to-play-for encounter that had the relaxed atmosphere reminiscent of a pre-season friendly.

It was definitely a season of two halves. Unbelievably good in the first half but spectacularly inconsistent in the second with too many of our star players either injured or suffering from a loss of form. But to repeat what I said at the beginning - I would have bitten your hand off for a 6th place finish.

So looking ahead to 2020, what does the season hold?  It's the nature of Thai football but there are already rumours circulating that one or two of our star players might be lured away by bigger and 'richer' clubs but I won't name names at this point. I think it's imperative that we try and keep the bulk of this squad together and if we do have to go out there to recruit new additions, can we please steer clear of the Korean third division? That's all I ask.