Taking a family holiday to the Land of Smiles is always something to look forward to. But this time, it was slightly different.

Having spent just one year teaching in Isaan, I returned back to the UK in 2014 with family in tow due to the fact that my father was taken into care. He was diagnosed with vascular dementia about three years earlier and by the time we returned, my mother wasn’t in great shape either. 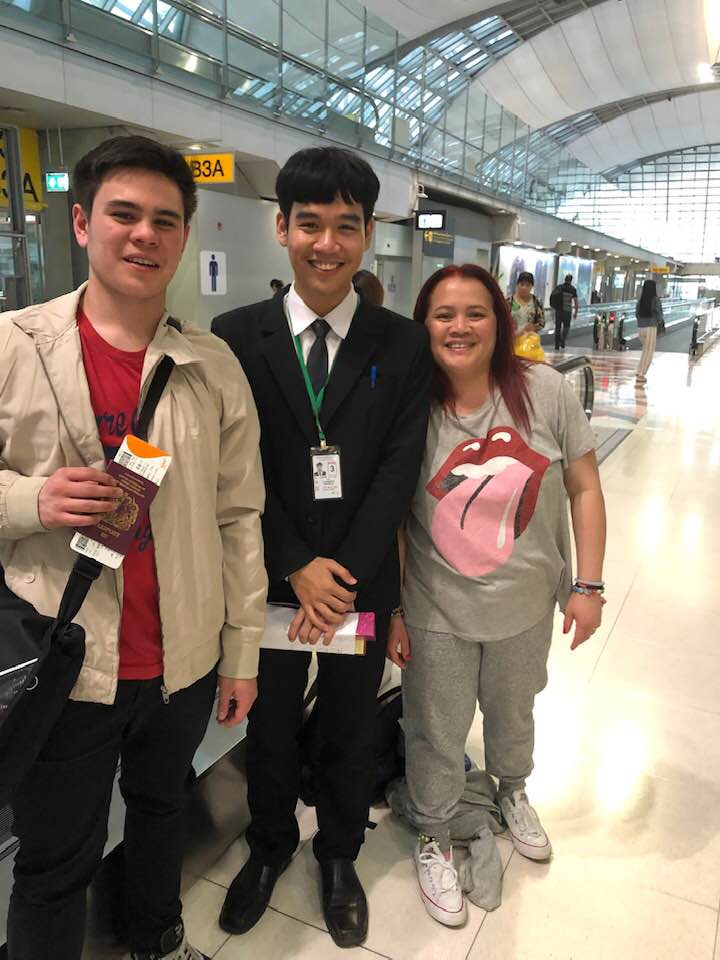 This event and the adventure that had lasted 18 months is well documented in my book ‘Bangkok to Ben Nevis Backwards.’

Some five years later, the three of us hopped on a plane for a fortnight’s break in Thailand. Although I’d returned to work in the IT sector, there wasn’t a day that passed that I wondered about my short-lived teaching career. As well as some much needed relaxation time, I had also hoped to reconnect with my ex-colleagues at Kalasin Pittayasan School.

The flight itself was fairly uneventful until about an hour before we touched down in Bangkok, my son announced that his passport was missing! The twenty year old university student didn’t have the best track record when it came to losing bank cards and other important objects but this mishap was on another plane altogether… pun intended.

We informed the flight attendants on the Eva Air flight and they did their best to help us find the vital travel document. But it was no good, the lost passport wasn’t playing ball.

Panic started to set in, my wife started to berate our son for being careless, tempers were starting to reach boiling point. Certainly not the best way to start this family holiday…

As the plane landed, we were being forced to come to terms with our limited options:

1. Somehow try and convince the immigration staff to allow one of us to get an emergency travel document from the British Embassy.

2. Accept the fact that our son had to return to the UK alone.

3. One of us go back with him and apply for a fast track passport in the UK and then return to our holiday destination to enjoy what time was left.

Something was bugging me though. Around halfway through the flight, a chap sitting across the aisle from my son had kicked off big time and was looking rather frantically for something. The whole event lasted about 4 or 5 minutes and by the time the flight attendants had come over to check on him, he had calmed down and was almost annoyed that they had noticed. Probably nothing to worry about.

We waited for the plane to empty and had another half-hearted look for the blasted passport, but again, there was not a sniff.

Please let us in!

When we left the plane, we were met by the ground staff and my wife was laying it on thick about how important this trip was. She was practically begging them to think of some way that we could get around this mess.

It was Songkran week and apparently the British Embassy was closed for at least 4 days. Just our bloody luck! That scuppered the idea of any help from those blighters then.

Facing facts, my son seemed to have finally realised that it was time for him to man up and get ready for the grim reality of a flight back to London less than a day after he’d left the place.

Then something amazing happened.

I was following the Thai conversation as best I could and there had been a development! I kept asking my wife to tell me what had happened but she was intent on hearing them out. Eventually I was allowed into the conversation. The immigration staff had apprehended a man who was trying to enter the country using someone else’s passport.

Yes it was my son’s!

Talk about total relief and amazement rolled into one huge wave of emotion!

Less than ten minutes later we had the prized passport in our hands and we were asked if we could identify the man who had tried to screw up our holiday.

I was led into a small room and there he was. The same old boy who had made the fuss about something or other during the flight.

I felt like smashing his face in but that wouldn’t really be a smart move. He was silent but looked very shaken. I was then asked if I knew him and I replied in the negative.  Instead of wasting any more time on this cretin, I asked to leave and that was that.

I can only assume that he had lost/misplaced his own passport and then found my son’s somewhere on the floor of the plane.

I did manage to get his name from the immigration police and now I am faced with a choice:

1. Forget about the whole thing

2. Inform the authorities here in the UK

What would you do?

I would inform the police if this had happened to me. So much unnecessary stress at the start of your holiday.