I had looked forward to becoming a teacher for years and the thought had never crossed my mind that this particular job would be considered anything but decent and respectable. How wrong I was.

I’d started to read a few ribald comments online about English teachers in Thailand and although I resisted the temptation to wade in, I found it somewhat frustrating. It was more than just a case of the old cliché that goes something like this: Those who can, do; those who can’t, teach…

Amongst expats here in Thailand, the general consensus seems to be that most TEFL teachers are a mixture of alcoholics, misfits and paedophiles. In my year of teaching I saw a mixture of the first two but I couldn’t say if I saw any of the third.

In KPS, I was the only native English speaker apart from a nice American lady named Alison. They hired a Frenchman and several African teachers, and even a Filipina. I was also shocked to learn that in Thailand, they preferred native English speaking teachers from the USA and Canada.

When I explained to several older Thai English teachers in my best Queen’s English that I was actually born in Scotland, they both looked so disappointed.

‘So Philip, you are not a Native English Speaker then?’

I tried in vain to explain that I was British but in the end I gave up.

There was a small shop near the bus station that sold cheap booze, and this was the place where the English teachers who liked a drop of the hard stuff would congregate most evenings. I was glad to avoid these guys, to be honest, and when I met a few of them and noticed the bleary eyes and whisky breath, I started to see where the bad reputation was coming from.

Okay, I was no saint, but I made damn sure that I never touched any alcohol on a school night.

I have already mentioned Mustafa, and I’ll add a little more about the big guy in a later chapter, but there were a few other notable characters that deserve to be discussed here for a variety of reasons:

This chap was a total gent, and in true Japanese style he was extremely polite, and never imposing. He did have a penchant for falling asleep however, and I suspected that he may have a case of Sleep Apnoea. For a very slight man, Kosuke could eat a huge amount of food. He once came on a 4-day break to one of the islands with my family, and we shared a coach journey of about 10 hours. In that time I witnessed him put away enough food to knock out a horse, despite weighing less than 8 stone.

Kosuke was often a guest in our house and he would cook up a storm with his fantastic Sapporo cuisine skills. One day he offered to cook some true English food for us, and after arriving with a few bags of groceries, he locked himself into our kitchen for several hours. By the time he was ready to serve the Hall family was absolutely starving. We watched, somewhat gobsmacked, as he approached the dinner table with a grin as wide as his face would allow. The plate was piled high with what could only be described as egg mayonnaise sandwiches! They were as perfect as could be, cut identically and immaculately presented, but – they were what they were! To this day we still miss this Japanese gentleman and hope to be reunited one day.

The teacher who offered me the job in the first place, a true lady. A little headstrong at times. I’ll speak a bit more later about her attempts to find love online, but overall I have a lot of time for Wannee, and she and Jum are friends to this day.

My Boss, and a very nice guy, if a bit touchy-feely. Always smiling and although in charge of about 40 foreign teachers, never seemed to be stressed whatsoever. His wife was also a nice lady, but far more scary than Kwan!

One of the most friendly teachers in KPS, and always happy to lend a hand. I was saddened to learn that she died earlier this year, and my thoughts are with her husband and children.

Santa Claus and his little helpers

Although Thailand is a Buddhist country, it does celebrate Christmas, and KPS certainly enjoys this festival. Whilst they probably don’t really get the religious side of it, they love Santa Claus and all the trimmings. Let’s be honest, the UK and most of the Western world have long since forgotten about baby Jesus, and Christmas is simply an excuse for a holiday, a few drinks and some extravagant gifts. 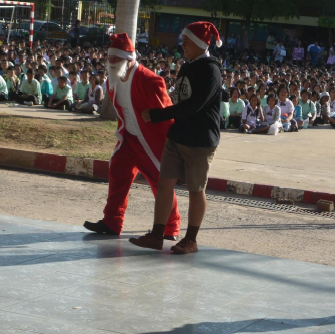 There is no official holiday for Christmas in Thailand, and on a very hot day in lateDecember Kwan asked me a rather strange question: ‘Philip, do you have a Santa Claus costume?’ I replied in the negative and off he went at an alarming pace towards the stock room. He returned a few minutes later with a bin bag that appeared to be full of tinsel and Christmas decorations. Rummaging through the contents, he looked like the proverbial Isaan Cheshire Cat when he produced a fairly sad looking Father Christmas outfit. But there it was: red trousers, jacket, hat and white beard!

On Christmas morning I was ‘ordered’ to don this costume and, with Tom dressed as one of my little helpers, we did a little dance on the stage in front of 5,000-plus students and then walked amongst the seated throng, distributing candies

Not every kid got a sweet because 300 doesn’t really go into 5,000, but we had a laugh and although I was totally drenched in sweat, thanks to the double layer of clothing and 40-degree heat, it was a Christmas day that myself and Tom will never forget It was also one of those rare father/son moments that I will treasure forever.

Thanks for reading my words and if you’re interested in my book, it is now available from Asia Books in shops all over Thailand.

Phil Hall was lucky enough to teach at a government school in Isaan from 2012 to 2013 and thoroughly enjoyed this experience. He also has a book published called Bangkok to Ben Nevis Backwards.

It takes the reader on a journey from the UK to India and finally Thailand. Debts, Dementia, poorly planned emigration, self discovery, family bonding and attempted murder are all part of the highs and lows of this 18-month true tale. This is an excerpt from the same book with a few alterations.