It's been an interesting few weeks since my last blog: floods, a knee operation and the start of the Premier League season. I am going to focus on performing arts in Chiang Mai for this blog, but before I do that, I will update on what's been happening here. I also need to move my 2 year-old daughter to another room as she keeps sticking a yellow plastic duck in my mouth, sunglasses on my nose and talcum powder over my face and laptop.

I'm in a little discomfort at the moment. Just over a week ago my right leg experienced a high tibial osteotomy and an anterior cruciate ligament reconstruction. The objective of this operation is to correct the results of a knee injury from 28 years ago. Basically, the bone below my knee was cut and a small wedge of bone cut from my hip was inserted in order to realign my knee joint. A titanium plate and screws are now keeping the bone together. A hamstring from behind my thigh was then severed and used to construct a new anterior cruciate ligament. Hopefully, in a few months I will be able to run again. In around a year, I should be able to play (not very well) football for the first time since I was nineteen.

The floods came; I feel this was inevitable because this year's rainy season has been one of the wettest I can remember. Dams are full, water tables have reached the surface of the soil and rivers are working to full capacity draining excess water away from the North. Like the floods in 2005, the water, once it had burst the banks of the Ping River, rose swiftly. Fortunately for us, our school is on a high piece of land and despite just about everywhere around us being inundated with brown muddy river water, we stayed dry. The water has now receded and Chiang Mai has returned to normal.

Thais are pragmatic people and when the water first started flowing into the city, vendors appeared at the edges of the brown blanket to keep sightseers nourished with their favourite snacks and sugary drinks. Quite a few Thais took out their fishing poles as well as they saw an opportunity to catch that evening's supper. Along the Night Bazaar a 10 kg catfish was caught.

Update over and now it's time to look at the subject of this blog: performing arts in Chiang Mai. I guess when I arrived 12 years ago there was a relatively small foreign expat community made up mainly of long-term residents, English teachers and guys whose jobs allowed them to work for 4 months and then party hard for 2 months in Thailand. I guess the relatively small size of the community prevented enthusiastic promotion of the Arts. Well, that's all changed now. Chiang Mai has become a sort of bohemian centre for new age people and its expatriate community is actively involved in music, yoga, dance, alternative medicine and amateur theatre. There is today an eclectic mix of activities for an eclectic community. 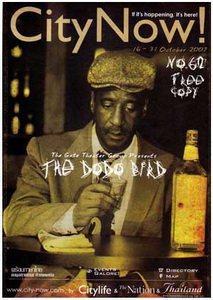 Back in 2007 I was ‘volunteered' to be a participant in one of the first organized theatre productions by Westerners in Chiang Mai. At that time a former professional actor and theatre company owner from the US worked part-time at our school and full-time at another school teaching English. Stephan Turner has a theatrical pedigree. His father was a familiar face on US television and cinemas during the 60s and 70s. He appeared in shows such as Mission Impossible, The Lucy Show and The Odd Couple; and movies such as M.A.S.H., The Long Goodbye, Watermelon Man and Sanford and Son. Stephan was also a professional actor and theatre production company owner in Chicago before deciding to travel the world. He founded the non-profit Gate Theatre in Chiang Mai and is the catalyst and driving force behind all its productions.

This first production by the Gate Theatre was the Dodo Bird. It's set in a bar in a small nondescript industrial town somewhere in the United States fifty or so years ago. It explores how a person in this environment fails to provide for his family and what it means to reach the fringe of his society. Stephan managed to convince John Gunther, the Director of the popular AUA language Institute, to rent out AUA's auditorium for the duration of the play's run. 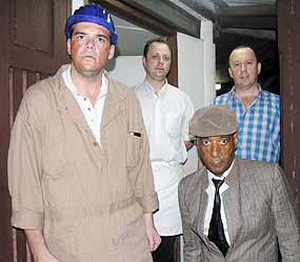 I played a guy who sits at the bar all through the play drinking beer and throwing out lines sort of in support of the underdog. My wife told me after the first performance that I wasn't acting, I was being myself. There was Dave, the barman, who refereed some of the more aggressive dialogues. James was the bully; his character verbally attacked the protagonist of the play while perhaps revealing more about his own insecurities than the deficiencies of the last character of the play. The last character was the protagonist of the play, the Dodo Bird. He was played by Stephan. I'm sure Dave and James would agree with me that we had great fun and we might be quite good teachers, but we're not actors. However, our enthusiasm, Stephan's charismatic performance and great dialogue from the writer of the play, Emanuel Fried, ensured live theatre had arrived in Chiang Mai. It was a great success.

The Gate Theatre has now put on many productions. Actors and audiences are drawn mainly from the expat community and each production has been successful. I guess this success has encouraged other groups of thespians to organize in order to scratch their performing itches. One of these other groups is The Playback Theatre Troupe. I also have a personal connection to this group as Shelley, one of the SEE TEFL assistant trainers, is an active participant. She was a professional actor in the UK and introduces many techniques from her acting experience, such as voice and presence projection, into her SEE TEFL input sessions.

The Playback Theatre Troupe doesn't offer formal theatre. It's more a spontaneous collaboration between the audience, who tell the story, and the actors, who act the story. A conductor facilitates the connection between the audience and the actors. The audience is warmed up and encouraged to relate personal stories that relate to that evening's theme. The actors then interpret and give shape within the theme to these stories. At the end, the audience is invited to share their thoughts about the reenactment. 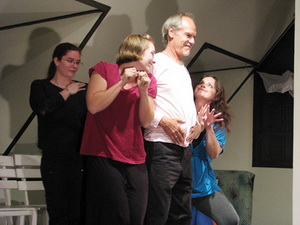 The Troupe meets weekly to learn and practice comedy improvisation skills and experimental theatre techniques. Their next performance will be at the Yoga Tree in December and will be a mix of Playback Theatre, Comedy Improv and Devised Theatre. The group is open and new members are always welcome; no performance experience is necessary. Contact Shelley for more details.

Anyone interested in participating as part of the Gate Theatre production team or would like to read for a role in any of their shows can contact them by e-mail. Actors, male and female, of all nationalities, from 18 years of age and up are being sought, as well as experienced Stage Directors. Additionally, assistant directors, costumers, stage managers and backstage helpers are also needed. No previous experience necessary. The Gate Theater Group promotes multi-ethnic casting. All nationalities are encouraged to audition and/or join their group. After they've received your information you will be contacted with additional information. The Gate Theater Group is a not-for-profit social group. They do not employ workers nor do they pay salaries. All participation is on a voluntary basis, and all proceeds and donations go towards the expense of producing their shows.

For me, my experience with live theatre was exciting and personally rewarding. The fear before each performance relived the start of my teaching career, as it matched the fear I experienced before each of my teaching practices on my TEFL course many years ago. Completing those first teaching practices gave me a buzz which I didn't experience again until the curtain fell each evening during my run as an ‘actor'. I felt alive. It was a natural high and one that I know could become addictive.

Never expected to see a note from you here.

I guess I never got around to telling you about my dad.
He goes by Jerry Jones, JJ, J Dog and maybe a couple more.

He just turned 85 and is still going pretty good. He's in talks now to get his book about Chicago police officer Two Gun Pete, made into a film.

If you rent M.A.S.H., he's the soldier that has his Jeep stolen about 20 min. into the film.

You can also Google "Chicago's Two Gun Pete" for more on his work.

He also wrote and appeared in the "Dolemite" series, way way back when!

Hope you're well. It's about to get pretty cold back home :-)

Love to all, Stephan

From the audience's reaction to the play, we did very well I feel.

I always doubted my ability to remember my lines and was worried I would 'dry' during one of the performances. Do you remember the night I actually forgot a large chunk of dialogue? I remember you took the initiative and managed to seamlessly (to the audience anyway) cover the hole I had left with a little improvisation. Nobody questioned why we had finished 10 minutes earlier than scheduled that evening.

I agree with you; it was a great experience, and I learned a lot.

A very interesting and detailed blog John. I enjoy reading your anecdotes. I hope you are well now.
This play was one of my most memorable experiences during my time in Chiang Mai. It was hard work and involved long hours of rehearsals but the sense of satisfaction and appreciation from the audiences we played to was overwhelming and made it all worthwhile. Eventhough mistakes were made, for an amateur dramatics group we did pretty well. You are right, we weren't accomplished actors and as you probably recall, I found it difficult to play such a burlish and aggressive character. However, I do like to think we developed some valuable skills and learned a lot from the experience. I still have the DVD with me and was proud to show it to my friends and family in England.

Aren't you the modest one, or my memory is really going. I don't ever remember you telling me that your dad had been in the sit com "the Lucy Show", Odd couple or movies such as "MASH". What is his full name or his stage name? I should like to rent one of these old shows just to see him!