I had time between courses a few weeks ago so decided to take the family for a short break away from the city and TEFL training. Although I love Chiang Mai, it's always nice to climb mountain roads and drive through clouds with windows open and cold breezes filling the car. Something that surprised me many years ago was reading that the mountains north and west of the city are actually part of the eastern extremity of the Himalayan mountain range.

Then again, it shouldn't have been a surprise to me because there is a marked similarity between some of the Himalayan hill stations I visited in India many years ago and places such as Mae Salong, Mae Hong Son and Doi Angkarn: cool temperatures, slow climbing trucks, mist, conifers, tea, rhododendrons and people wearing cheap knit wear. So, early Wednesday morning we set off. We had booked 2 nights at the Doi Angkhan Nature Resort

It's a roughly 170km journey of mainly beautiful tropical countryside driving from Chiang Mai along highways 107, 1178 and 1340 via Chang Dao and the King Naresuan stupa on 1178. The junction of the 1178 and 1340 is actually on the Burmese border, and I guess this is why check points are manned by soldiers, rather than police, along this stretch of road.

There are coffee shops all along these roads supplying fresh coffee grown in these mountains as part of the current King's successful opium crop substitution program. The coffee's delicious and cheap. I'm told, as I've never visited one, that the coffee tastes better than Starbucks. There's certainly a better view from most of these roadside coffee places and not a paper cup in sight.

The ethnic mix of people in this corner of Thailand is also very interesting. There are many hill tribe villages including Padung, who are known for their elongated necks stretched by brass coils. There are also Muslim Jin Haw (galloping Chinese) villages. These are the guys who used to control trade in this part of the world with their mule transports and knowledge of mountain passes.

There are also villages of Kuomintang (KMT) Chinese nationalist soldiers forced to flee from the Communists to Thailand in 1949. Up until just a few years ago, it was the KMT and Khun Sa, the Shan warlord, who were responsible for much of the opium industry in the Golden Triangle. Incidentally, at the end of the small lane next to the SEE TEFL school in Chiang Mai is a very large and impressive house. The gates and walls are high and deny access to prying eyes. It's ‘rumored' the little old Chinese lady that lives there is the wife of one of Khun Sa's deceased lieutenants.

On the road to Chang Dao are several elephant camps. There is mixed opinion about elephant camps, as many of the elephants need to be ‘broken' when young before they can be trained to perform; and this often involves beating them. I feel elephants are absolutely amazing creatures. When you get close and look in to their eyes, they lock on you and you can see intelligence. Their bulk suggests a lack of agility, but that's misleading as these animals dance through mud, mountain slopes and thick jungle like sure-footed Special Forces soldiers. You don't need to enter the camps to meet them either, as they can be seen munching on foliage just a few meters from the road's edge.

My wife's family owns a successful car services company in Chiang Mai named Amnuay Motor Air  Because of this, we have a top of the range car TV erupting out of the dashboard and hanging from the ceiling of our family car. Because of this, I have to listen to and watch continuous replays of my children's favorite cartoons whenever I'm driving. One of these cartoons is about the war elephant of King Naresuan, Khang Kluay  Because of this, I was introduced to the story of this King and his heroic deeds. And because of this, I decided to stop at the King Naresuan stupa on our drive through the mountains. 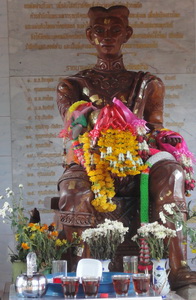 This stupa was built, it's said, as an act of merit making by his siblings to this great Thai King who died in Wiang Haeng close to here in 1605 while campaigning against the Burmese. I knew little about this King until recently. There have been a few Thai movies about his life story which I watched but cynically dismissed the action and heroics as exaggerated. However, I have been researching, and it seems the movies are a fair reflection of history. This Thai King was truly amazing. It's a story all Thais know and a story foreigners who live here should know as well. Therefore, I've decided to dedicate the rest of this blog to his story. 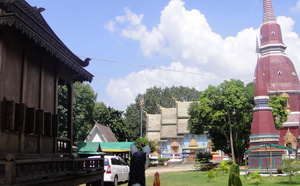 King Naresuan is one of the most revered monarchs of Thai history. His victories over the Burmese during the years around the end of the 16th Century prevented Burma from consolidating their earlier military victories and hence extending further their empire to encompass large swathes of Siam. He also allied in the north Siam with the Shan, or Thai Yai, and the Lanna Kingdom of Chiang Mai, which led them to achieve independence albeit fleetingly from the Burmese empire centered on Pegu. In all senses of the word, he truly is a national hero to Thais.

King Naresuan grew up as a Siamese prince in the Royal Burmese court at Pegu. He was a hostage held by the Burmese King, Bayinnaung of the Toungoo Dynasty, in order to prevent the prince's father, King Maha Thammarachathirat , from launching a rebellion against Burmese political influence of Ayudhya. While a captive, the prince, along with other royal hostages from the Burmese empire, was trained in the art of war by Portuguese mercenaries and the Burmese. A fellow student and childhood friend was the grandson of King Bayinnaung, Prince Minchit Sra. The prince's paths would fatally cross later at the battle of Nong Sarai (near Suphan Buri).

The battle of Nong Sarai in 1592 was a pivotal battle of the Siam-Burmese wars of this period. Although vastly outnumbered, the Thais fought ferociously against their enemy. However, in opposition to the vastly superior numbers of the Burmese army, they started to retreat and were close to collapse. At that moment, in an almost unbelievable example of valor and leadership, King Naresuan riding on his royal war elephant Khang Kluay sought out Prince Minchit Sra while fighting ferociously through ranks of enemy soldiers. 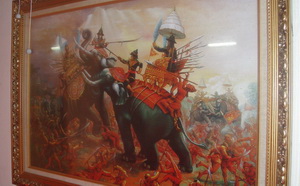 When their elephants met, combat became face-to-face with both leaders standing on the heads of their elephants lurching at each other with sword and lance. It's said the fight was so ferocious that soldiers of both armies stopped fighting in order to stare in awe at the spectacle. A final slice of sword cut completely through the Burmese leader's body from shoulder to hip, and Siam had won the day. Without a leader, the Burmese stopped fighting and retreated to Pegu. King Naresuan became a Thai hero, and the date of the battle (January 18th) was adopted as a national holiday which is celebrated each year as Royal Thai Armed Forces Day.

Always associated with King Naresuan is fighting male chickens (I've avoided saying ‘fighting cocks' as it just didn't look or sound appropriate). At memorials to him around the country, there will be small concrete male chickens surrounding the spirit house. The reason for this is that while a captive of the Burmese, his fighting chicken beat the Burmese champion. Instead of accepting a material reward for winning, he requested freedom for Siam. Whether this story is true, or not, it certainly adds more patriotic fervor to his story. 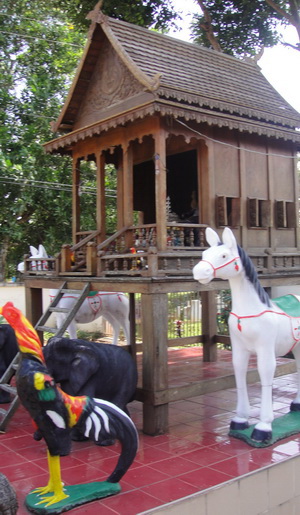 It wasn't until 1767 that the Burmese were militarily strong enough to launch a new campaign against Siam. This time there was nobody with the tactical genius and personal courage of King Naresuan to lead the Siamese and Ayudhya was sacked - but that's another story. It's also a story that led indirectly to the start of the current Chakri dynasty of Thai Kings.